So here it goes, we are up to the letter P now!

Progressive Industries EMS:
This installation was done in 2012.
It is one of the best things we did to our motorhome's electrical system.
This is the installation of our Progressive Industries EMS LCHW50 which is an Electrical Management System.  It protects our sensitive electronics inside of our motorhome from spikes, surges, low voltage brown-outs or even mis-wired posts in campgrounds.  (which happens more often than you think!)
In the past, we usually didn't camp much in places with hookups, instead we rely on our solar or at last resort, on our generator.  We did have some smaller Surge Guard portable surge protector units that just plug onto the cord. These work okay for spikes, but have no protection for low power brown-outs which can be just as bad.  The little units do not reset automatically either.
So we decided to go with a hard-wired unit that is installed inside of a locked compartment.   They are more expensive, but worth it.
You can buy an external 50 amp surge protector EMS that just plugs onto your cord out at the post, but we hear of those walking away... even with the little clip locks. It is sad that some people in campgrounds steal things.  So we decided to get the one that gets hard wired inside the compartment, as safe as we can get it.

We ordered the EMS unit from Camping World where they were having a sale for $250.00. That was the best price around when we placed our order.  This is a hard-wired unit that needs to be installed carefully, with attention to each little step.  One mishap and we can ruin our electrical system. 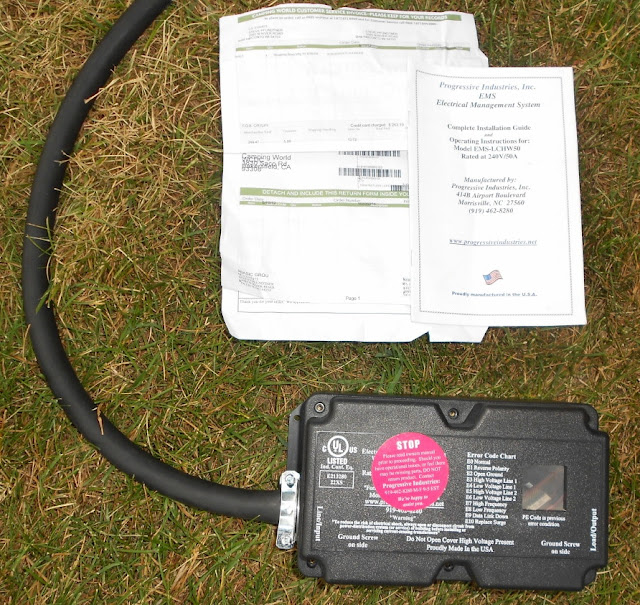 We read the directions from front to back, and Steve set up his work area.  I was his "gopher" for fetching tools.  Love his stool, eh?  He already attached another section of 4 strand heavy wire to the unit in preparation to install.  (I think it's number 6 wire) 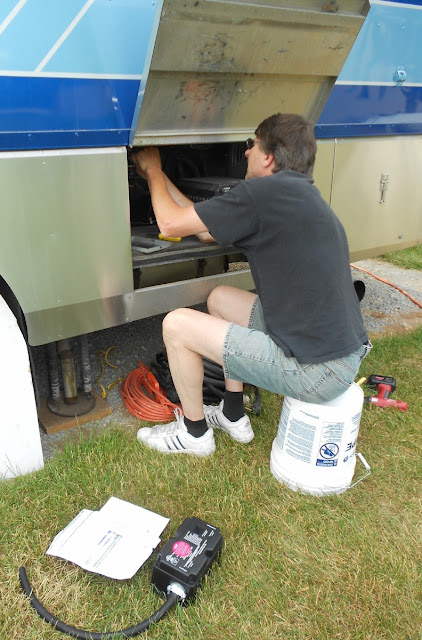 Next he did the connections in the EMS unit, and then the actual digital readout device gets plugged into place.  We also had to determine if our air conditioners had a "delay" in restarting if they ever get turned off mid-cycle (they don't have that built-in feature) ...  so the EMS has the option of either:
to allow a delayed restart to protect the air conditioners if a shut down and restart ever happened.   Now we are all set. 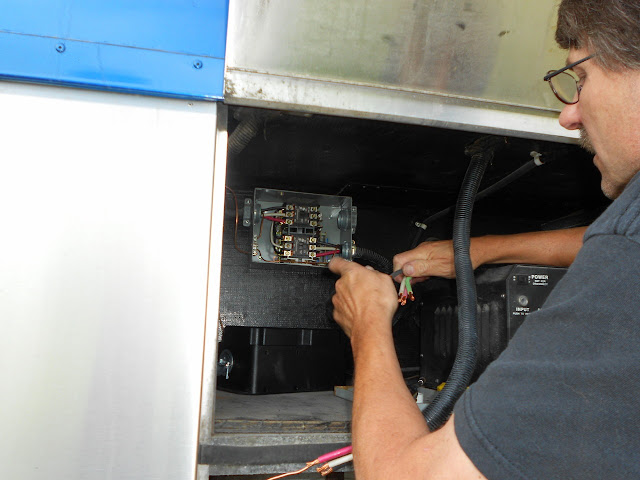 We doublechecked everything again and compared it against the diagrams in the instructions.  We stood back to admire our work.   Now it was time to plug it in!  We ran a "test" ... sure enough, it worked!   It read each leg of the 50amp connection and tested for any errors.   All is fine and it says that our garage power is clean.  (we already knew that).

We mounted it up into place on the side wall of our electrical bay.    Don't it look "purty"????   (the black box on the left is what we are gabbing about)   It had to go to the left of the Transfer Switch, as the wall on the right had incoming and outgoing wires for other items. 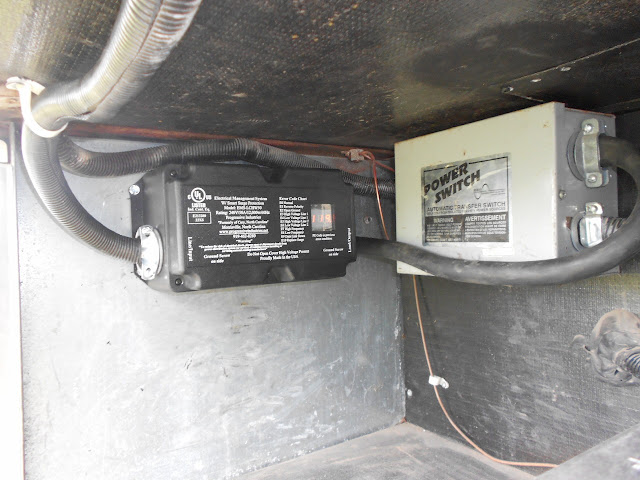 We put all of our other electrical gear back into the compartment.  We carry our main 50 amp cord --- a.k.a. The Snake.   Then a 25ft 50 amp extension, and a 30ft 30 amp extension, and even a plain old orange 10 gauge longer cord to use in a pinch.  Also a few dog bones and some adapters for various campground hookups. 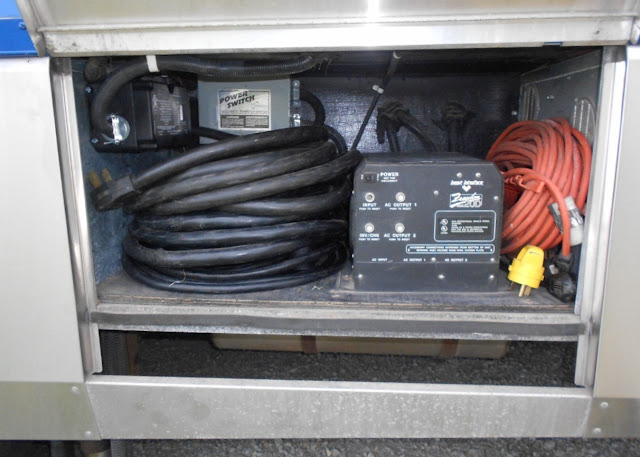 Since that picture was taken 6 years ago,
we replaced our inverter, so here is a more current pic: 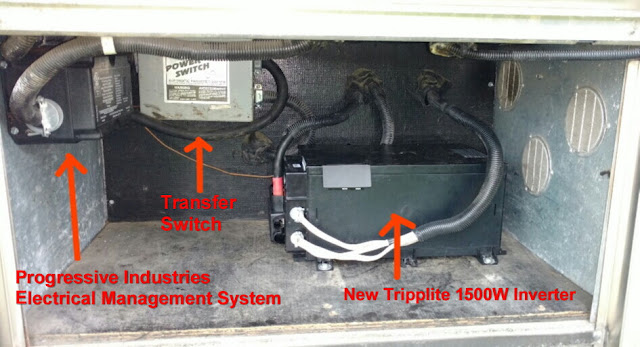 In doing park maintenance, Steve can't tell you how often people back into power posts, look around fast, and tip it back up again and hope nobody notices.  It can knock out connections inside, or make wires touch at broken connectors inside, not seen by the unsuspecting next camper arriving and plugging in on the site.

When you start adding up the cost of replacing tvs, laptops, cell phones, control boards in all the appliances, light fixtures, etc. It is not something we want to ever have happen to us.

We are PHONE-LESS this weekend!   I jokingly told my friends on Facebook to contact us via Smoke Signals!

Two weeks ago, my faithful 2 year old Motorola Maxx 2 droid phone went whonkey after doing a new update.  Thankfully, it was under a protection plan, so Verizon replaced it free of charge.  They shipped the replacement phone to me 12 days ago, and all was good to go.  It did keep asking for an update, but I kept hitting the delay button.  It was explained to me that the new update was over stressing the processor in the 2 year old technology, so just don't update it until new patches from Motorola were in place.  For 9 days I kept hitting "delay 24 hours".  On the 10th day, it went ahead on it's own and updated! ACK!   Well, it went nuts again, totally dead when it was fully charged and would not reset or start up at all.  I tried all the suggested online fixes... nada.

We drove into Appleton and went to Verizon.  After he fiddled with it for a while, he said it's DEAD.  Sooooo they are going to send a 3rd phone!   (free)  This time he said when the update screen comes up, just swipe and close it out and do not hit delay.  Leave it in the old version and it should be fine.  We are due for upgrade at the end of the month, so we will see if the 3rd phone works or keeps messing up.  They will do a trade-in in my favor at the end of the month on a 2 week old phone. LOL

In the meantime, we have laptops and tablets and home internet.  Steve does not have a phone. After carrying around 2 phones at all times, and in the old days he had pagers for his job (and even now part time driving handicapped folks they have a phone while in the bus)  he doesn't want a phone of his own.  Sooooo we will be quiet and no phone ringing this weekend, at least until later Monday when the new one comes?

Today was sunny and up about 38 degrees. We took the dogs for a nice long walk around the neighborhood.  It sure felt good, as the snow is melting and the sidewalks are clear for the most part.  Spring is in the air, and some of the willow trees have some buds on the branches.  Of course we can still get snow as late as April, but for now, we will enjoy some sunshine.

Posted by KarenInTheWoods at 7:05 PM