MOTORHOME MODIFICATIONS - *P* is for Pump, Pressure Tank and our son Mike

I am going to start off the new year with posting some of our motorhome modifications, a few at a time. I will post repairs, modifications, or neato things we have found for RVing.  I have lots of pics in my files so I will do them in alphabetical order.Underneath that stuff, I will post my regular daily stuff..... kinda sorta fun, eh?

So here it goes, we are up to the letter P now!

Pump and Accumulator Pressure Tank:
THIS MODIFICATION WAS DONE BACK IN 2011

Steveio had been thinking of getting a bigger water pump for our motorhome, along with an accumulator (pressure) tank.

(our original pump has been working just fine-- but you know Guys: "Bigger is Better")

Sooooo  he found one, a super duper one from what he said, on Ebay.  It came in the mail and it is just what he wanted!    It's a pretty expensive pump, called a Par from Jabsco.  This is a heavy marine water pump for boats that is belt driven with a bigger electric motor.

It runs in the $250-300 range but he got it for $65 plus shipping!  Good deal----  he hooked it up temporarily to check it out-  it runs quiet and smooth.  He still needed to buy the right port kit of adapters to change it to screw-on threads instead of the barbed ends.  Threaded screw on lines are more secure than the push on barbs with clamps. That is the only reason he didn't install it immediately after it came in the mail.Here are pics from all angles for you geeky RV guys...... 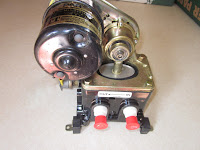 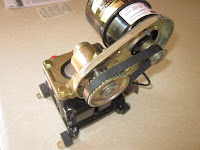 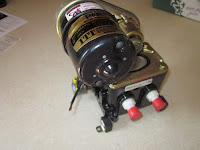 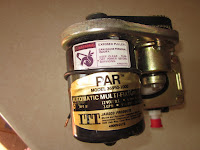 He was also looking at accumulator pressure tanks (to lessen the necessity of turning pump on and off as often when only using a little water a time)  ... and I happened to stop at a rummage sale where there was a brand new one in a box!  The lady at the rummage sale said they bought it, but the repairman who came to their cottage brought a different one along to install, and they couldn't find the slip to return this one.  So it became ours for a mere $5.  On the VERY DAY that Steve gets the pump in the mail, is the same day I found the tank he needs!  Too cool---- 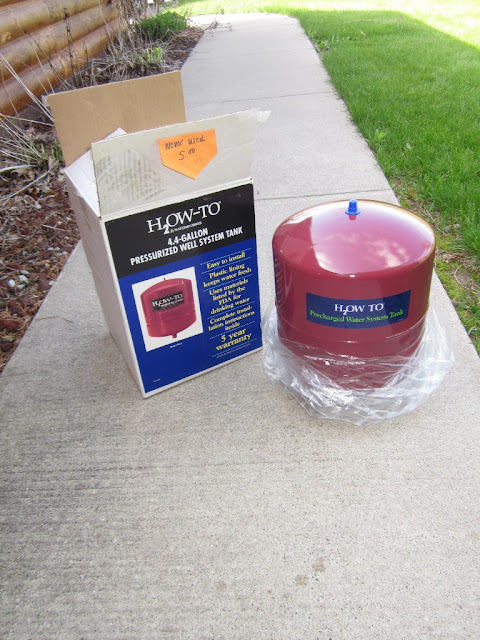 The new tank is rated for the right pressure for our lines, so we are okay there too.

After brainstorming his installation ideas, and measuring and figuring and gathering fittings, hoses and pieces, he was ready.  He put the tank in a cut-down 5 gallon bucket for stability, with the fittings coming out some holes he cut into it. 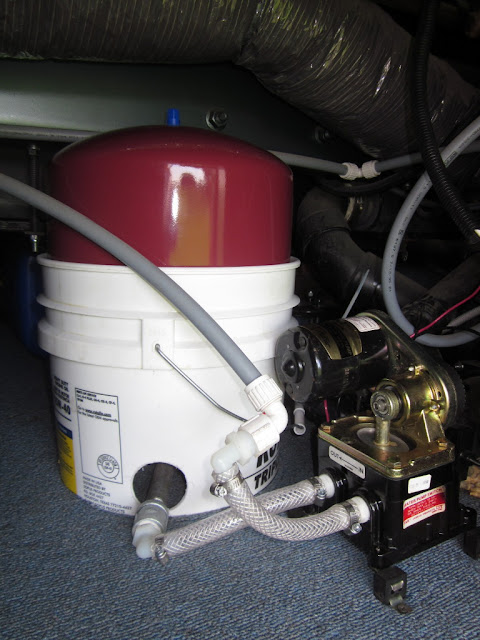 If you look close, there really isn't any area to mount the tank to on the frame unless he drilled holes through the steel beam behind it.  So the bucket for stability is a great idea.  He did strap it down by the handle to something behind.  Plus, he can remove the bucket, and screw the two fittings together on a pipe nipple to winterize the rig, and store the tank in our house where it won't freeze.  He has a shroud guard to put by the moving belt part of the pump.

After he had it all done, I got to go inside to test it out.  Works wonderfully!!!   Using an accumulator tank allows the pump to run less often, and when you use a faucet, the pump doesn't need to kick on each time until you run a large amount of water.  So filling up a pot for coffee or grabbing a glass of water does not need the pump to operate.   Steve said it will save on battery power.  LOL ... yah right.  Me thinks it's just more "justification" to his "Bigger is Better" obsession.

Now...  I mentioned the old pump, which was manufactured date of 1995, it works just fine.  So he added two fittings to each side that can accommodate a simple garden hose.  He will use this as an auxiliary pump to add water to our tank when we are long term boondocking if we don't wanna move the rig to refill.   We can haul water in a bladder or buckets from a well pump to fill our tank.  Or have it on board if something ever happens to the other new pump?   (perish the thought after all of Steveio's installation and brainstorming!) 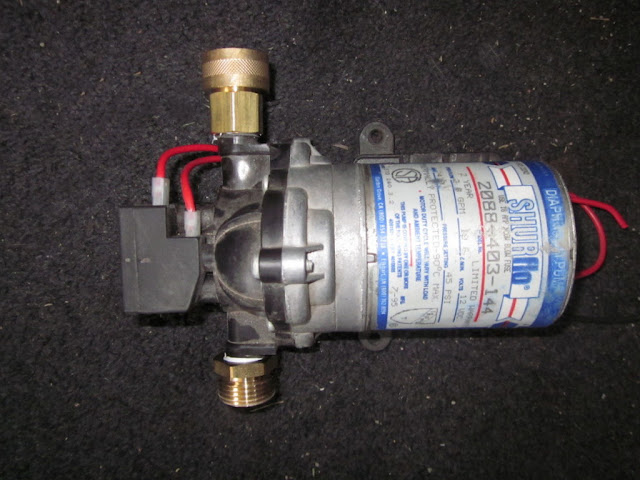 Our motorhome has the type of fresh water filling port you need to fill with a hose under pressure, not just a gravity fill like they have on some travel trailers.  We can't just pour in more water from a jug or bucket if running low while boondocking.  Our type of RV needs a pressured hose to fill the tank with extra water.  Seann, our Cannuckie RV buddy had this bladder and pump setup and it worked great for boondocking!  We bought a bladder now too.  So we have our extra pump to make it work. 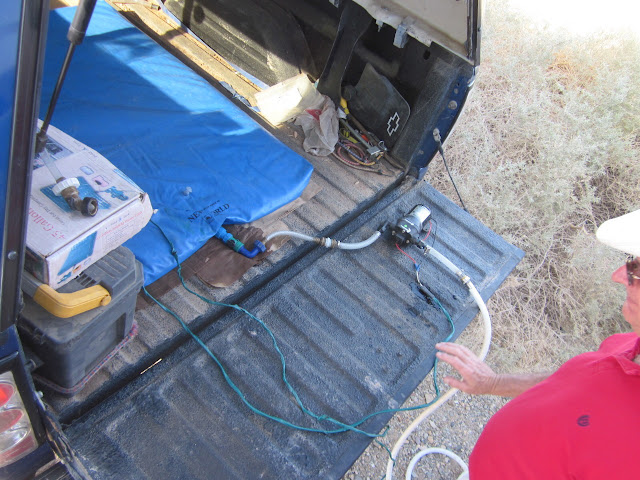 In our water compartment, this area is called a "manifold".  It has various levers and knobs to control the flow of water to various parts of the motorhome.  Also levers to pull to empty the black and grey holding tanks.  Steve added a household water filter unit to the fill area, so all water is run through it before going into our tank.   He added a 12 volt outlet to power either that auxiliary pump or our portable mascerator (poop pumper)    There is also a faucet for an outdoor shower to screw onto, or a hose for washing the rig.  It is also GREAT for washing dirty muddy doggers------ 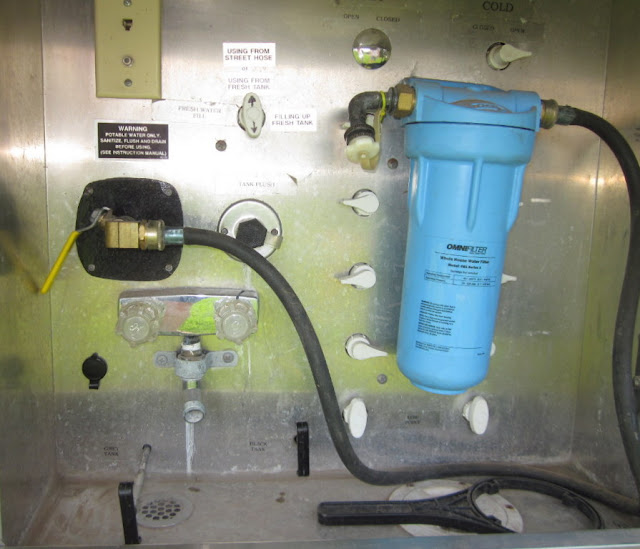 Soooo that is it for the motorhome modifications today.

And last of all,
I would like to end up this blog saying
Happy Birthday
to our son, Mike,
who is in Heaven. 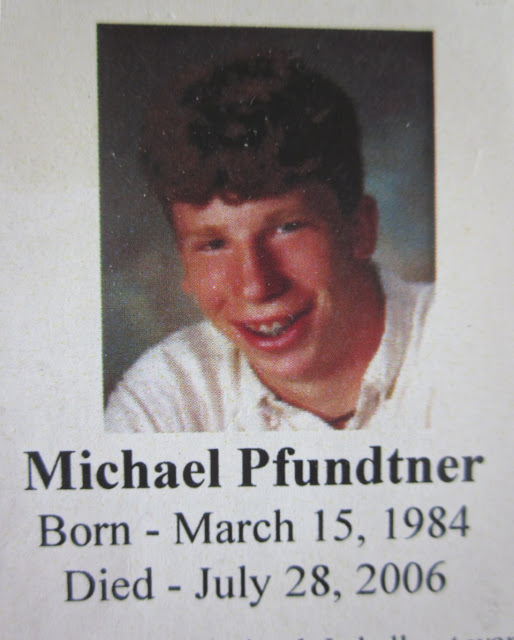 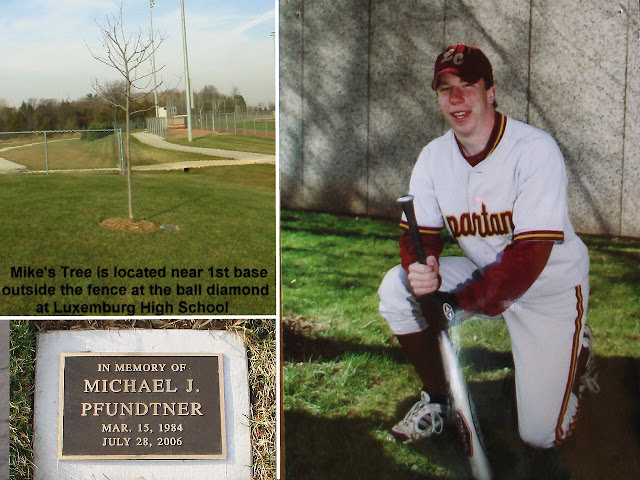 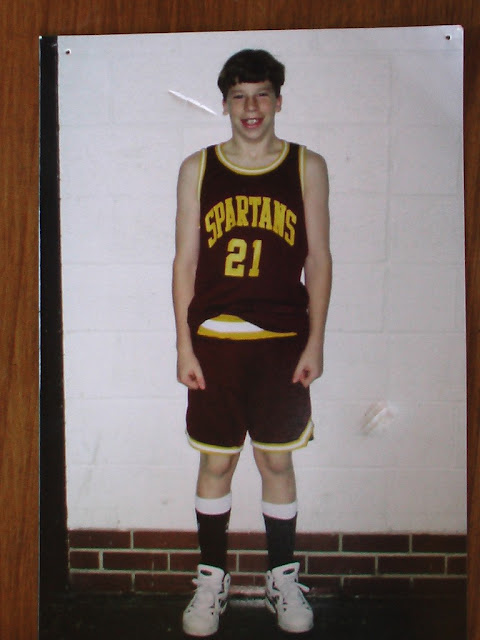 He would be 34 today and we miss him. Each family gathering and holiday, I feel the loss of one more adult child with a spouse and maybe more grandchildren to love. 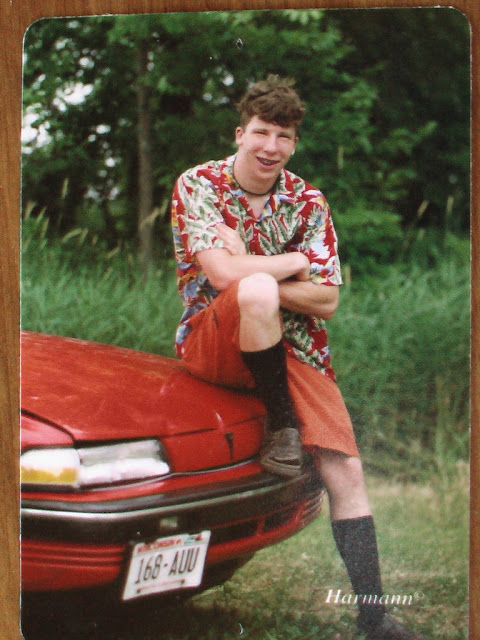 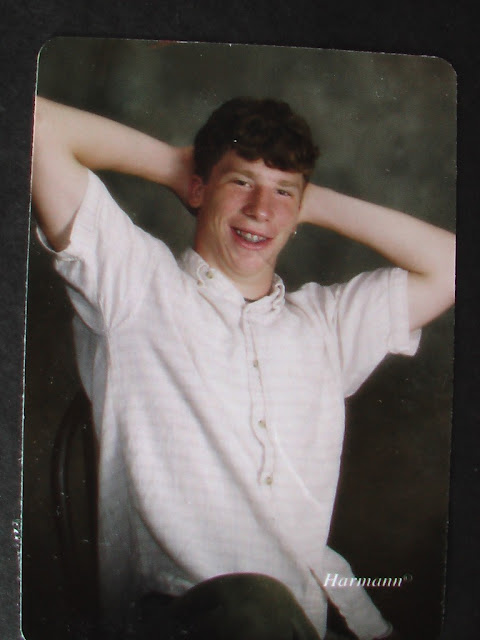 We miss you Mike. 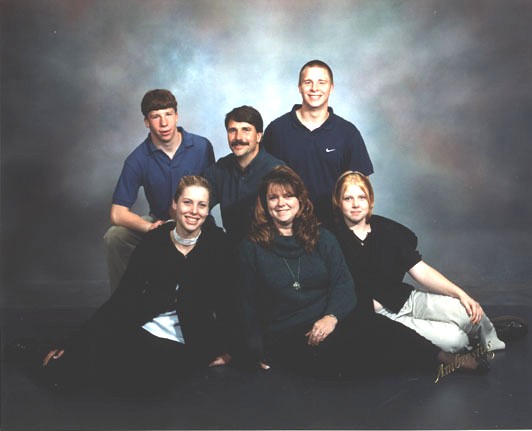 Posted by KarenInTheWoods at 10:24 AM