So here it goes, we are up to the letter P now!

Pac Brake Repair:
THIS REPAIR AND REPLACEMENT WAS DONE IN 2012, SIX YEARS AGO....
We noticed our "pac brake" was not functioning.  It is also called an "exhaust brake".  Steve crawled under the bed to make a diagnosis.

For those who don't know what this part is.... it goes on the exhaust pipe by the engine and helps as an extra "brake" by shutting down that inside flapper dealie and retards the pressure to make the engine work as a brake.... to slow down the whole motorhome instead of just relying on the brakes pads on each wheel.

Our diesel motorhome has the engine in the back, underneath our king sized bed.  We lift up the heavy bed together.  He props up the bed mattress and deck with a heavy pole and can crawl right into the engine compartment to work on it! 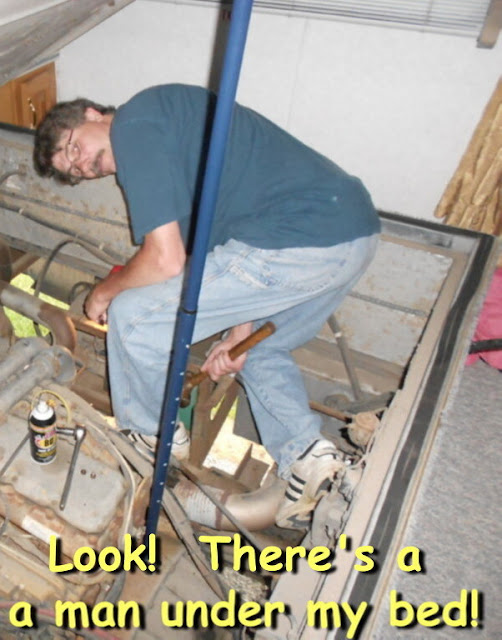 His first thought was the the Humprey valve.  This is the Humphrey Valve. He got a rebuild kit and decided to operate on that as an easy fix. All that he needed to do was change out the little inside rubber diaphragm and the rubber O-ring.  That was the easy part. 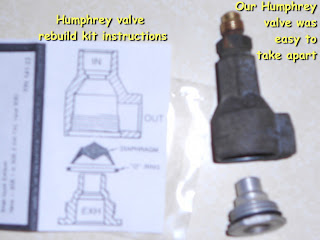 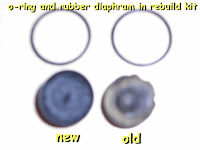 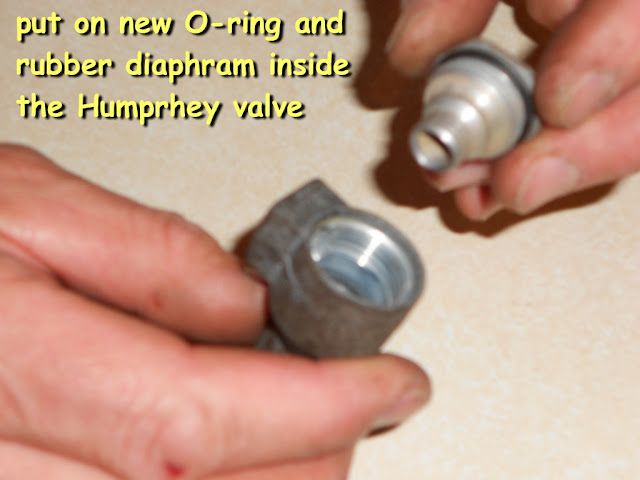 Okay... that was done and we took it for a test drive.  The Pac Brake would still not operate correctly. It moves the piston, but not the butterfly valve.

Upon examination, it was the interior butterfly would not turn and close inside the exhaust pipe.  It was rusted (frozen) shut tight! It gets heated so hot from the exhaust that over time it has swelled up, warped out of round, and stuck.  Fortunately, it was stuck in the OPEN position and not the CLOSED position.  Whew!
Now we needed some serious pounding with a hammer.... on the lever that controls the butterfly inside the pac brake cylindrical tube.  Many whacks later, it still didn't knock it loose! 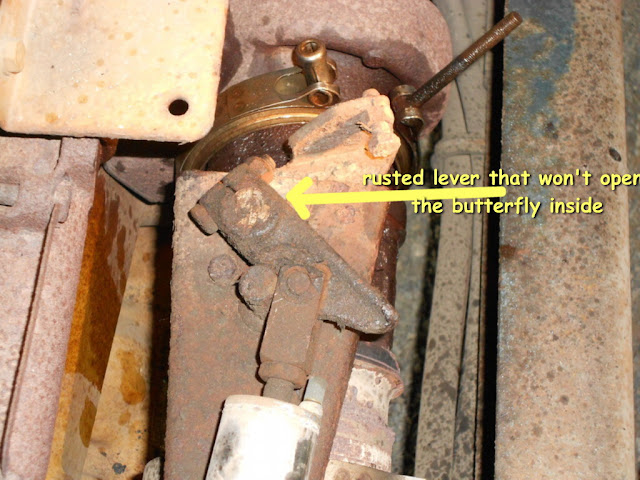 Now  he figured he needs to remove the entire pac brake to work on it out on the work bench.  So he needed to loosen the two flange clamps and get that entire pac brake outta the engine area so he could work on knocking the butterfly inside loose. 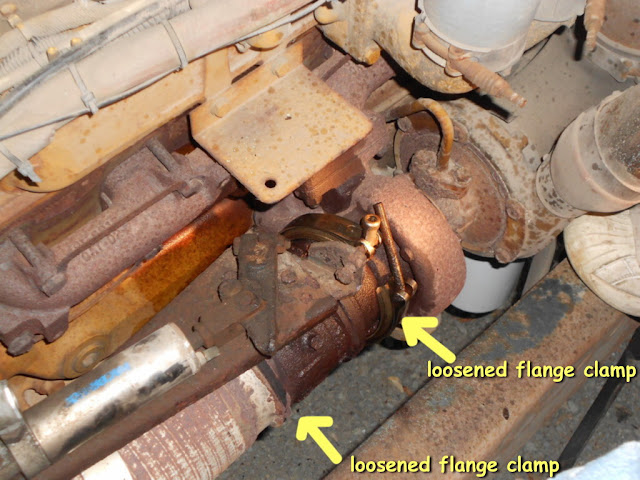 Sound easy huh?   Well.. of course it's NOT.... once the two clamps were loosened, the entire pac brake housing was rusted in tight!!!!   He had to use a chisel and a big hammer.... after many whacks (Steve estimates about 20)  it finally came loose!!!!!! 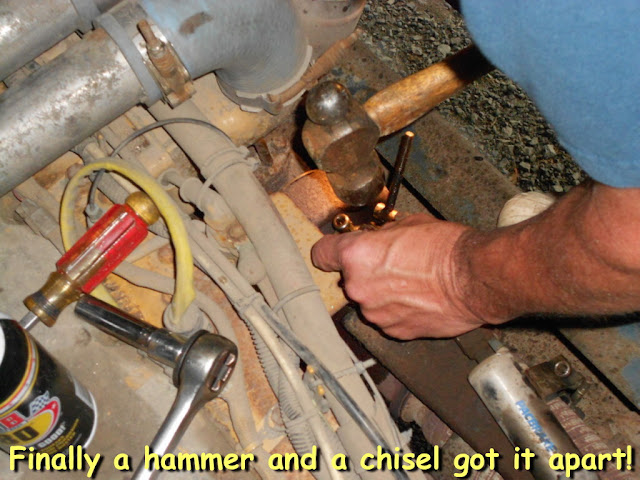 Next hurdle, the butterfly inside the pipe was of course stuck in the open position, which the two fins of the butterfly intruded into the exhaust pipe and turbo unit on each side of the pac brake that he was trying to remove.  It was a very difficult job to try to flex back the exhaust tube (which doesn't flex much) to give enough clearance to slide out the pac brake with the stuck butterfly valve.  Arggghhhhhhh 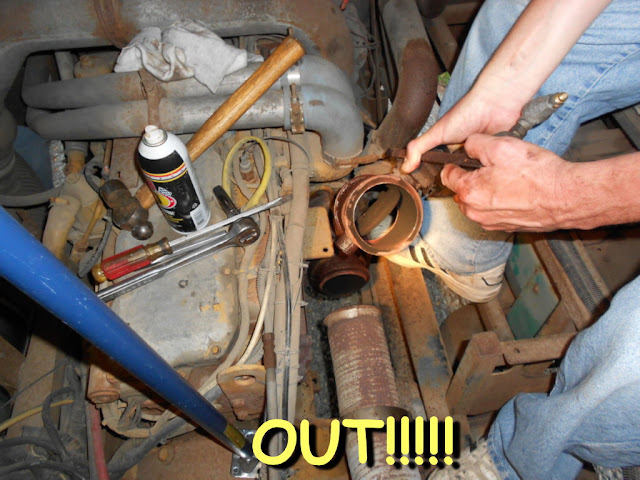 See how that center piece (the butterfly) is stuck in the open position?    We stuffed a rag in the opening for the turbo and taped off the end of the air line to the Humphrey valve too. 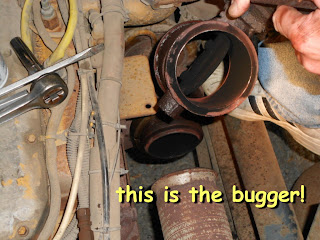 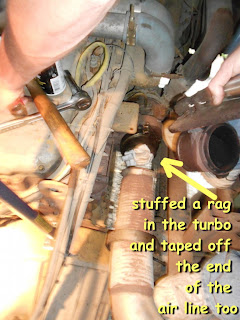 Yup, this is what is "broke" 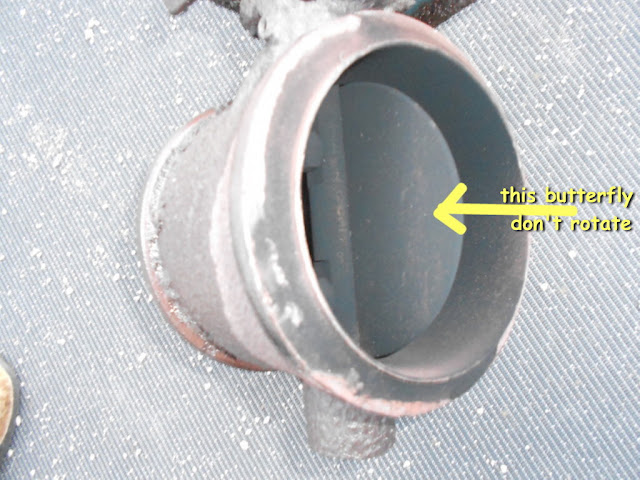 A pac brake is not a cheap item to replace...  it runs in the $700-1,000 range.   That is why we are going to try to loosen the stuck butterfly ourselves. The piston part is not the problem.   The piston part seems to function correctly, and it the part that gets lubed with special pac brake lube.   But the rusted up butterfly lever IS the problem and that takes such high heat when the engine is running, that lube does not work on it. 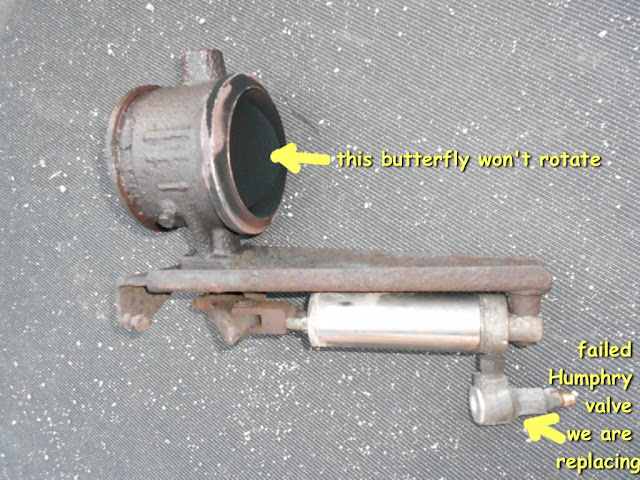 Steve hammered on it out on the bench,
then in the vise,
then with a bigger hammer...
nada..
it was NOT going to move!

Yes, he put the pac brake back in, and it went in very easily now that the butterfly could be shifted to the closed position.  Dropped it right into place, hooked it all up, clamped down the clamps and then added the brand specific Pac Brake Lube to the 5 points of lubrication indicated on the bottle.   There... done! 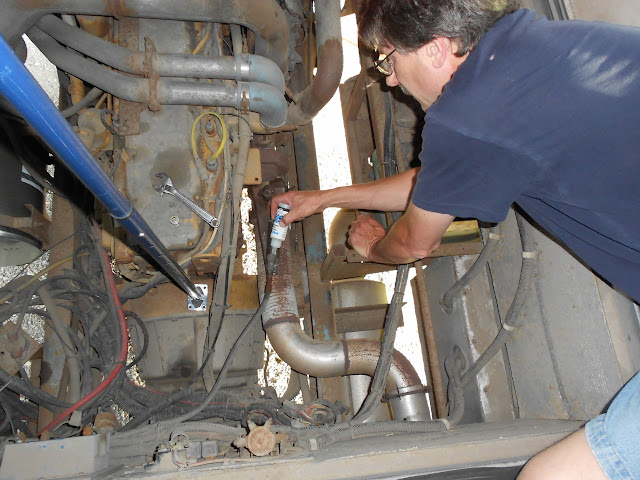 We then took it for a test drive and it worked perfectly!   Steve even had me drive for a bit and let him look with the bed lifted up, so he could see it actually working.  What a reward for a job well done!

Pac Brake Replacement:
Steve decided the leaking piston on the pac brake on our motorhome was not holding after his little repair job.  It was working intermittantly, and a few times we had to pull over and lift the bed to "unstick" the pac brake.  Not good, especially on an interstate!

So he searched the internet and found a new one to replace it with.

Here are some pics for you RV Cat Engine guys to oogle at ..... 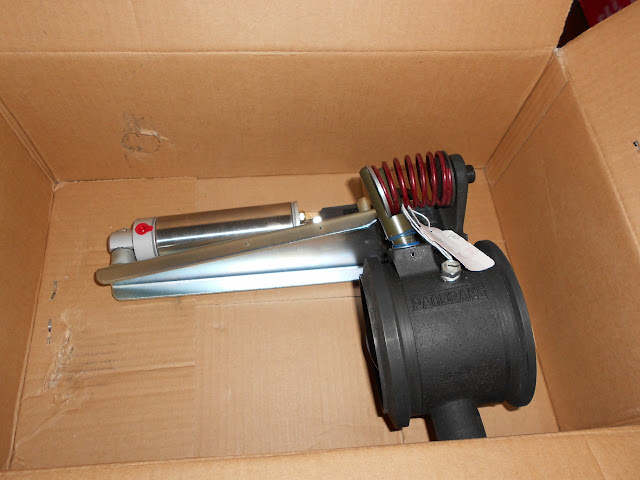 I am sure the replacement will go quickly, because we have had the other one out twice.  He thinks the actual flange is hanging up because the round chamber is warped from the heat... and also the piston device is not working properly as it was leaking and he did an epoxy glue job on that might not be holding.  We know on our last trip, it was working erratically.  Instead of fighting with it, he decided we should just invest in a new one. 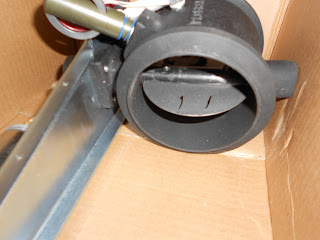 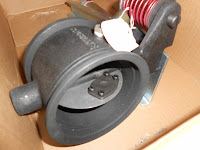 Here is the info and cost:

I am soooo glad Steve is able to do these changes himself.  It would probably have cost upwards of $1,000-1,500 to get it done.

Ahhh you guys are probably tired of reading about my front porch redo facelift.  But heck, it's winter, we aren't travelling, so bear with me.  It's the only fun thing I am doing right now after being sick for so long!

I decided to add four quilted pillows that match the throw quilt on the couch. I put two of them on the chairs, so it ties them all together. I have two little quilted coasters that match on the little table between our chairs as well. 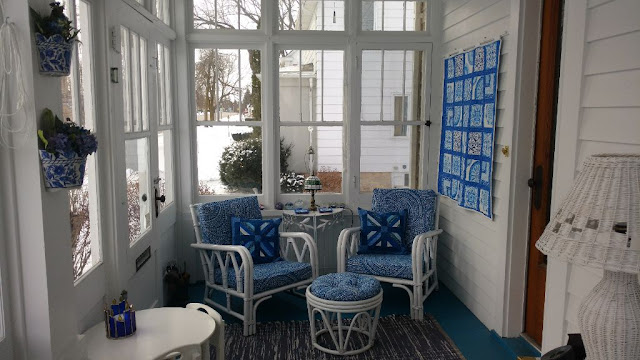 Over on the couch, I put two more quilted pillows and the throw quilt.  Next to the couch is a basket of quilting and weaving magazines. 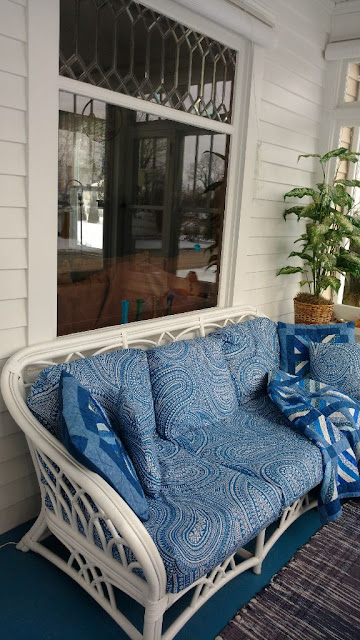 Now we are all set for coffee, but it was only 19 degrees out this morning!   If we go out there, with the single pane windows, they all steam up. Even if we set out a little portable heater, the windows are all fogged up and freeze over.  Best to wait for a sunny morning.  We use it for spring, summer and fall.  And these few exceptional winter days that were warm and sunny! 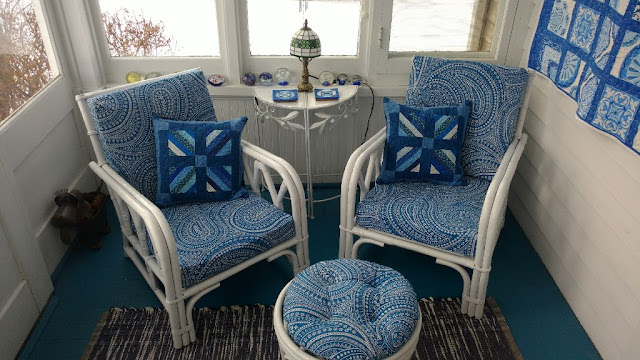 I do have two eager models
who love to hop up on the couch
and keep an eye out for that Mail Lady! 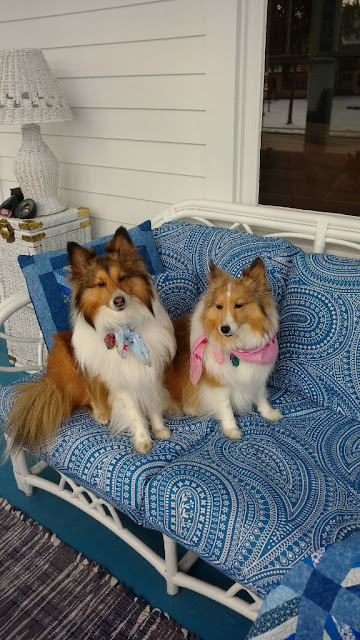 We grilled out steaks last night, even though it was cold.  Sometimes a bit of food cooked outside is just the cure for winter blahs.  We got some more snow yesterday, not much, but at least things are white and pretty.  Much nicer than 2 weeks ago when it was all melted and brown and grey and muddy looking.  I will take the fresh white stuff over that any day.

Steve is working on some plans for the upcoming spring spruce up at the museum. We volunteer there and most things are done by a only few people who step up.  They are going to tackle the cedar shingle roof on the log cabin this spring, so Steve is going to a planning meeting for strategy and shopping lists.

Then later today he is going back to his old park to help with planning for some improvements on the pavillion building. Because he worked there for so long, he is more familiar with the systems and configuration of the buildings. (the state has not hired anyone to take over his vacated position, nor are they going to)  He is going to give input on the HVAC situation there and speak to the contractor they hired for the changes.  I am glad he can still assist them in this project, but they are paying an outsider to do the work.  If he were still working there, I can bet it would be him doing ALL the work! hahahahaha

Posted by KarenInTheWoods at 1:35 PM