So here it goes, we are up to the letter S now!

Steve had removed the icky fake indoor/outdoor carpeting covering our steps a few years back. Not only did it look terrible, but it traps in the moisture and makes the metal on the stairs rust.

Look at how icky they are! 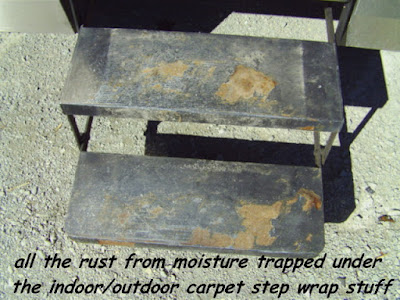 I ground off all the loose metal and rust
using a special grinding wheel and tool
for paint. (we used it on the logs of our house) 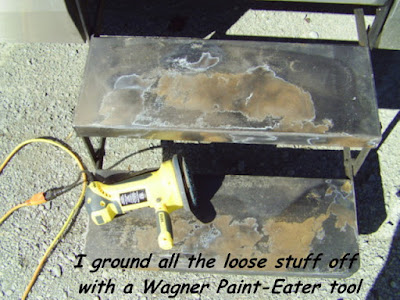 Using a foam brush,
and Rustoleum paint,
I put on two thick coats of paint,
letting it dry in between coats. 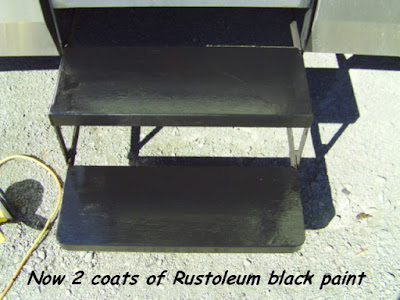 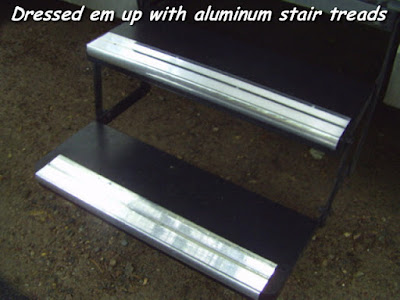 It matches with the aluminum lower portions of our motorhome and works very well. But the black portions do need the touch-up every other year or so.  It's a real improvement of what we had to begin with.

Stained Glass Window Insert:
We were down in Arizona in 2011, and took some day trips into Mexico at Los Algodones for some dental work.

While there, we found this wonderful vendor stand of stained glass panels for RV door windows.  We know some other RVers have gotten panels in the $70-80 range.  So we knew her first price of $130 US was negotiable.  In Mexico, everything seems to be negotiable.

We walked away, promising to come back after the dentist was done.  She REALLY wanted to make her first sale of the day she said, and dropped it to $90 US.  But we left.  We told her we had a dentist to pay for first.  LOL

The variety of patterns and colors was amazing
just about any subject or style.

I got my dental work finished, and next was Steve’s turn. While I was waiting for him, I ran to the drug store and shopped at a vendor with some souvenirs for the grandkids.  But then I went BACK past the stained window gal.  I said I would come back, right?  She now dropped the price to $70 US because I came back when I said I would.  But…. I told her I still had to pay the dentist, and would not know how much extra cash money I could spend.  I walked away again.   I wandered a bit and explored one more block around on my own.

On the way back to the dentist, I again saw the stained window gal.  Now she dropped the price to $60 US.  This time I said yes, I would buy the window that we had looked at.

As she was wrapping it up, she looked closely at it and saw a crack in the corner!   OH MY!   I am so glad she saw it and was honest enough to tell me.

So now I had to decide on another window…   and she dropped the price to only $55 US because of my dismay!  She was so worried to lose a sale, and knew I could go to one of other vendors and might find that blue one I had my heart set on.   We settled on another, same pattern but all clear, no blue.  The $55 US exchanged between us, after starting at $130.00.  She carefully wrapped it up in sturdy cardboard and thanked me twice for coming back.


Darling Steveio went to work putting in our stained glass window!   He used some clear Pro Flex rv caulk and we bought a sheet of unbreakable polycarbonate clear plastic to reinforce it from a hardware store.

Once he fitted it into place,
he screwed the framing back on to hold it.

It sure looks pretty!  It is patterned enough for privacy, but also lets in light and sparkles in the sunshine.  The one with the blue would have been nice, but settling on the bargain price we are happy with the clear border just as well.

Posted by KarenInTheWoods at 1:12 PM