In my last blog, you may recall that I mentioned Stevieo had a new project on the horizon. Yes, we were going to swap out our garage doors. From the old wooden one with the windows to a newer all metal insulated steel door. He found a used one the right size on the local Facebook Buy Sell Trade pages,  It came complete with rails, torsion springs and a garage door opener.

Friday afternoon, Steve was done driving his Old Fart Party Bus about 2 p.m. So he figured it was a perfectly good time to start working on swapping out the garage doors. The weather was beautiful at the time, but it was due to storm and rain a few hours later, about supper time. I was a little concerned that maybe we would be partially done taking down the old door and not getting up the new one before the storms hit.

Steve wasn't worried about it at all.

He gathered all of the tools needed to do the job and by 2:30 we were ready to start. Here is the old door in place. I took photos so I could list it later on Craigslist and the local Facebook buy sell trade pages to sell it when we were done dismantling it. 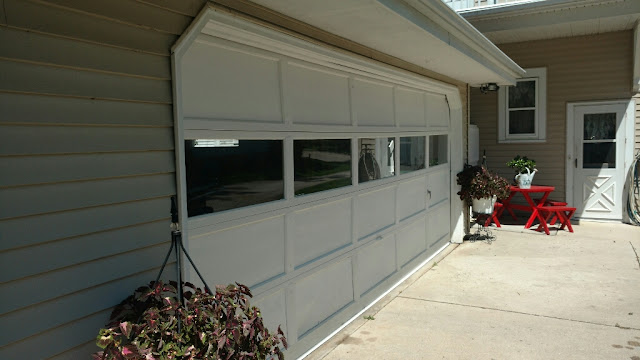 We started out at the top, of course, where Steve undid the tension in the top springs by carefully using two rods. Then we were able to start unhooking all of the hinges and rollers and taking the door down one panel at a time. 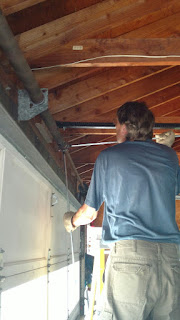 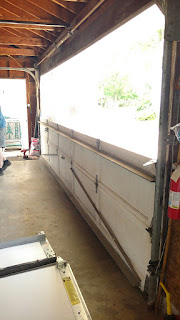 I was the Gopher Gal, as well as the Nut Retriever when he dropped them and rolled across the floor. I was the Panel Grabber as each piece came down. I could grab the opposite end so we could stack them carefully in the garage. They were VERY heavy! 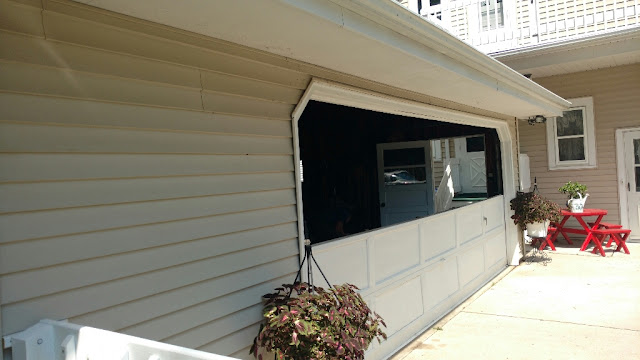 Using the electric drill with a socket on the end made quick work of removing all the nuts from the inside on every hinge. I had to keep up with him and also keep an eye on the weather.

The door panels were very heavy as we took each one down. Once he reached the bottom section, he had to unhook the existing cables and adapt them for the newer door brackets. This way we could use the existing track and tension springs from the old door on the newer door and not have to change over all of that. 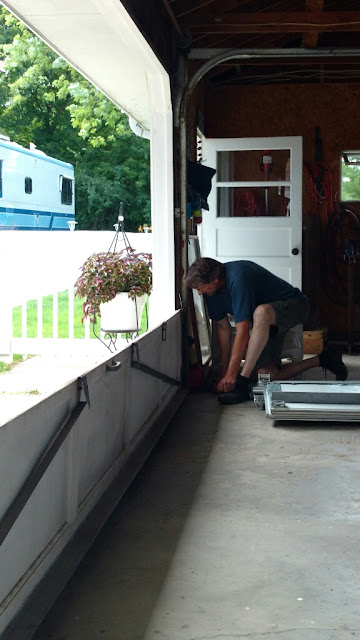 When we go to sell the old door, we will include all of the tracks and rollers and spring that were included in the sale when we bought the newer door.

Woohoo! We got the old door down in less than an hour!

The skies were clouding up and the storm warnings were going off on my phone.

Now I had to set down my phone to help figure out how to best put up the newer door. I forgot to pick it up to take pics while we were assembling it section-by-section. The top and bottom panels were easy to figure out, of course, because of the hardware and the bottom sweep. The two middle ones we weren't sure until we notice the stamped numbers on the hinges. Fortunately, the hinges were all marked with numbers 1 2 3 and 4 so we knew which panel went in which section. Easy Peasy! 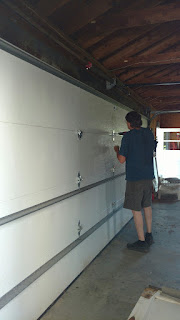 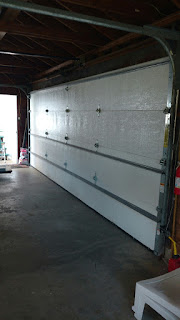 Once we got it all together and screwed into place, I looked at the clock. It was only 4:30! Wowzers we got the whole new door up in just a little over an hour and all we had to do now was tension the spring on the top and adjust the cables correctly. 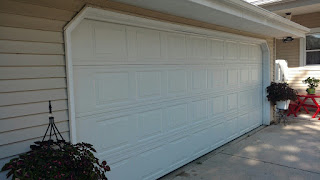 Once that part was done it was time to go make supper. Luckily I had some leftover minestrone soup I had tossed in the freezer, so a quick microwave zap and a pack of crackers and we were done with supper.

Now the storms rolled in big time!!!  The huge one with funnel clouds went just north of us and out into Lake Michigan.  Another one went south of us. People just 10 miles away had ping pong sized hail and shredded trees and cars damaged.  All we got here was some rain... no wind. Whew!


Now it was time to move over the garage door opener. The old position was offset so the opener could be attached to the door at a stronger point on the frame rather than over the center window. But now with this door, no windows, we can attach the garage door opener bracket in the middle of the door--- where the bracket is set for the most balanced lifting point.

Also, we examined our original Liftmaster garage door opener which was made in 2006. It is a chain drive type which is noisier, but it has served us well. It has three remotes, which we keep one in the house near the kitchen. It allows us to operate the garage door, if we wish, from inside the house. It also has a nice switch by the passageway door that is already wired into the system, as well as the sensor eyes down at the bottom of the door for safety.

Added to that is the idea that our original garage door opener is already wired in with the door switch and sensor eyes on the tracks. All we had to do was move it over a foot-and-a-half. Versus ripping the whole thing down and starting over installing the other opener, wires and sensors.

We decided to keep what we had and just move it over.  We had that done in about half an hour and tested the door up and down a few times.   We fine tuned the travel length and tension.  Wheeee done! 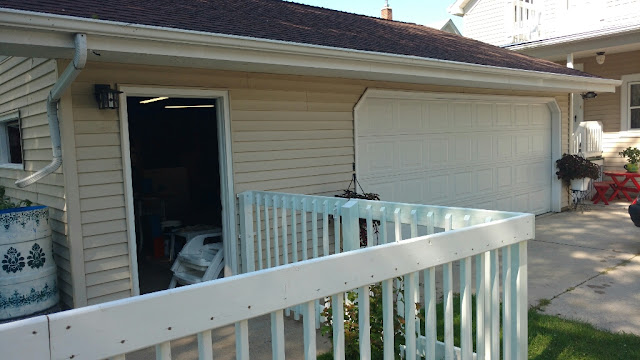 I think it looks much better.

Now Steveio can finish insulating the garage
and add his garage heater for winter projects. 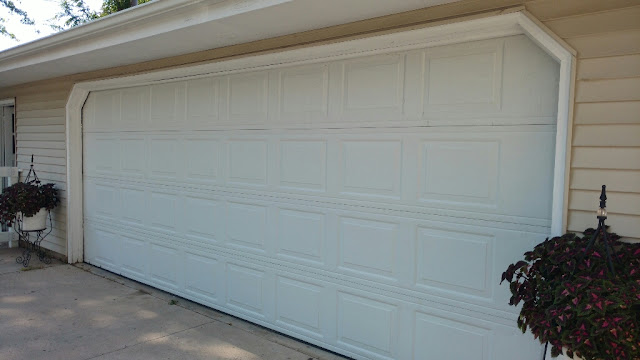