Cooking up a new modification on our motorhome

As most of you blog readers know, Steve and I really enjoy cooking in our motorhome. We rarely go to a restaurant. So we try to keep a fully stocked kitchen and utensils for when we head out to the woods.

The only drawback on our Safari motorhome is that it does not have a propane oven. It does have a convection oven microwave combo, which finally works after a few years of it being frustratingly inoperable.

Since we usually are boondocking without electrical hookups, that can present a problem. We would have to either forgo baking something, or we have to run the generator to bake things. Especially in the early morning for muffins or cinnamon rolls or biscuits, we do not wish to disturb people around us with our generator. The generator on board is really quiet, but we still don't like to use that unless we really have to. 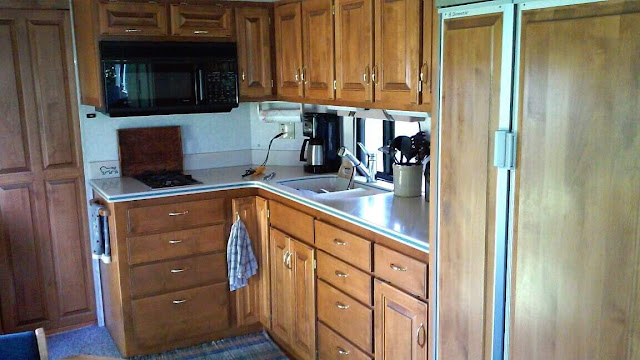 Here is our present set up in our kitchen with the microwave convection combo over a two burner cooktop set into the counter underneath it.

We have discussed a while back about adding a propane oven stove unit to our rig. See the drawers underneath the cooktop? I would be willing to sacrifice three of them to put in an oven. I would also love to get more burners rather than just two on the cooktop.

To the right of the sink I have four more additional drawers, so I could easily sacrifice those three. Leaving the bottom drawer intact is where we store our dog food and extra wine bottles. Those are both necessity! 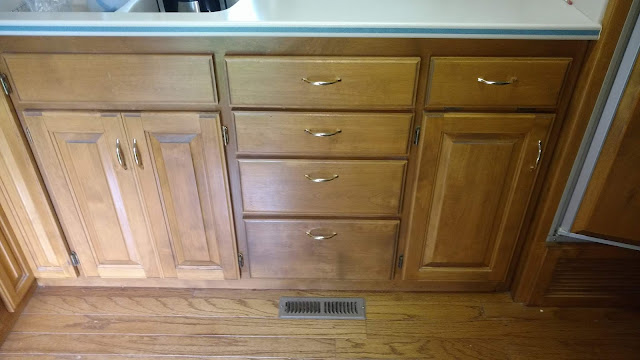 We looked around at propane stove oven units for RVs, they run in the $400 plus range for a new one.

In the past, our solution was to use this Coleman propane oven that stands alone. It works very well for us, but it is rather small. It can only handle a smaller rectangular tray or pan, not even a full size cookie sheet or cake pan. I have done small turkey breasts in here, but it is a challenge.

Stevieo was perusing the local buy sell trade pages on Facebook Thursday. Lo and behold, he ran across a used RV 4 burner stove with propane oven. The guy was only asking TEN DOLLARS!!

Not only that, it's the 21 inch size oven which is what I really wanted! It gives you three shelf positions and you can put in two racks which can allow you to bake two trays of cookies or two pans of muffins or two pizzas at the same time.

We had an oven like this in our Sierra travel trailer, with the extra deep space. When we bought that trailer, I made dealer throw in an extra rack. We had four teens and needed the pizza space, I told him!

Our Coachman motorhome had the 17-inch which was much smaller with only two rack positions. I really didn't care for the 17 inch. The bottom rack position is usually pretty useless because everything burns... arrgghh! 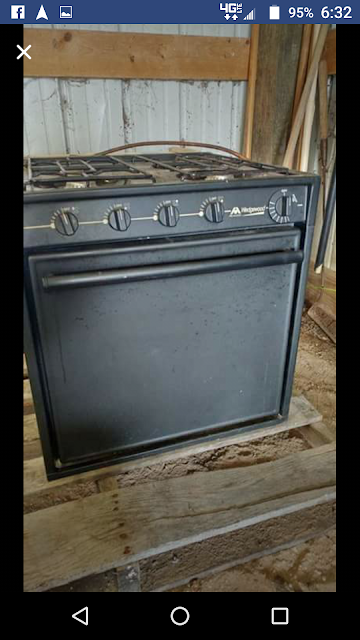 It didn't look too bad in the pictures, so we contacted the seller.

We made arrangements to go look at it early because the seller works all night and gets done at 6 a.m. He asked if we could get there as early as possible so he could go to bed on Friday morning. He lives 45 miles away so it meant getting up extra early for us to head over to check it out.

The oven portion looked virtually unused but the top portion had a few areas of chipped paint around the edges. There was a buildup of grease spills and gunk underneath the cooktop portion that needed a good scrubbing. But other than that, for $10 we were willing to clean it up.

So our project begins... We tore it apart and started cleaning the individual pieces. Steve sanded down the chipped areas and I got high temp Rust-Oleum paint to give it a fresh coat. I scrubbed the individual burners and wiped out the oven.

The enameled cooking area black portion was in perfect shape. But underneath it took a while to scrub up the the spillovers and grease. 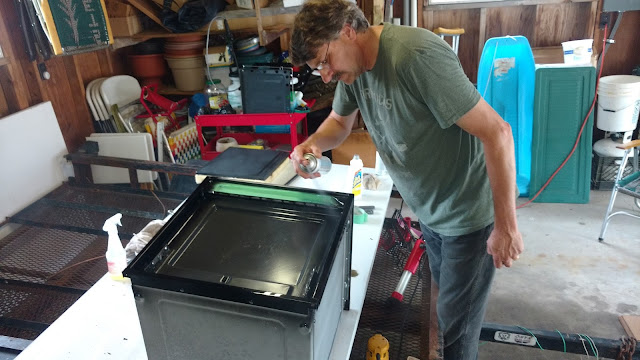 Soon Steve was ready to give it it's final coat of paint. He also decided to repaint the front oven door and handle, as both were faded and could use some sprucing up 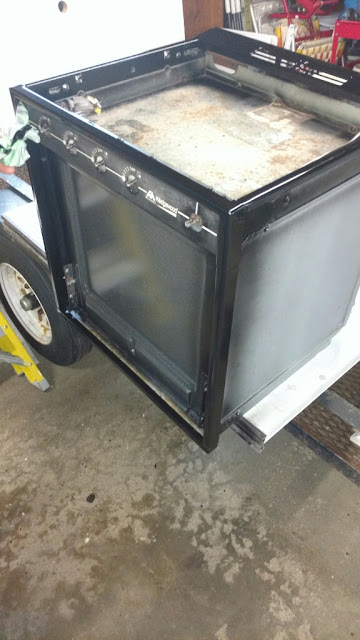 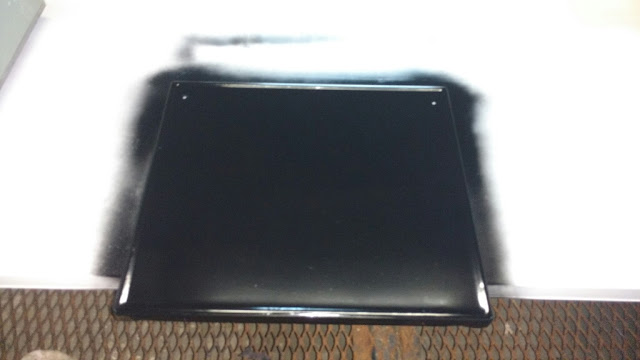 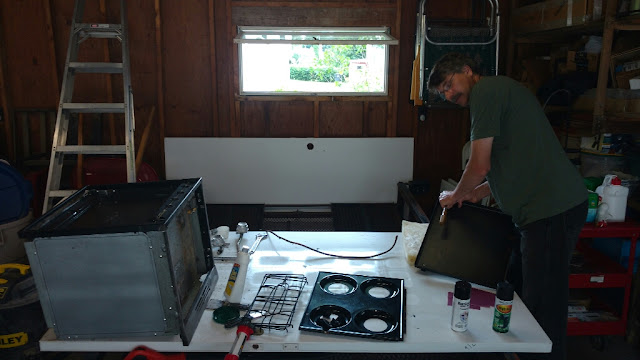 We went out to double-check and measure in the motorhome. We removed the three drawers. I condensed the items from those drawers over into the other four drawers to the right of the sink. The bottom drawer is the one that can remain for our dog food and extra wine bottle stash. 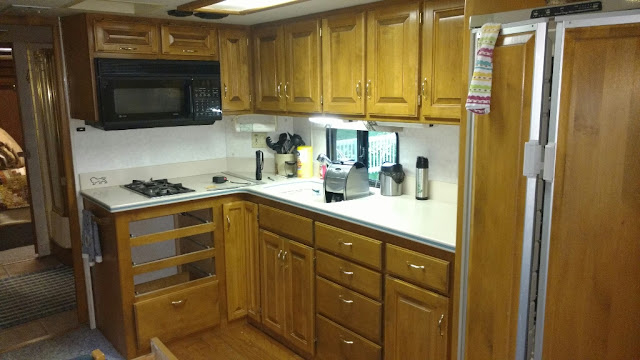 With careful measuring, Steve drew the preliminary lines on the Corian type countertops. They are actually called Fountainhead but are similar to Corian. 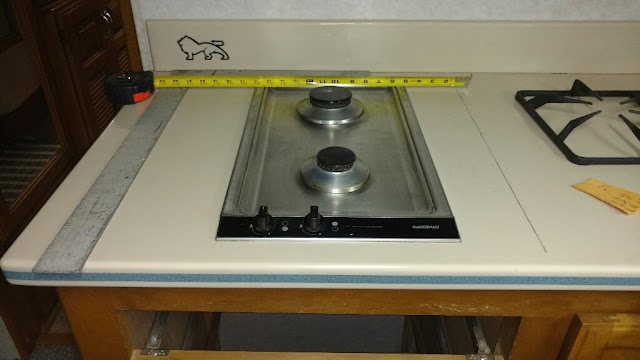 He has to get a finer tooth new blade for his saw before he starts to cut.

He carried out the oven to the rig to set it down on the floor. It was easier to take measurements from it right there then going back and forth to the garage. 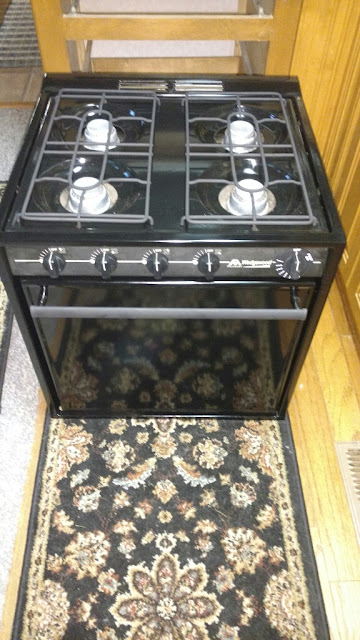 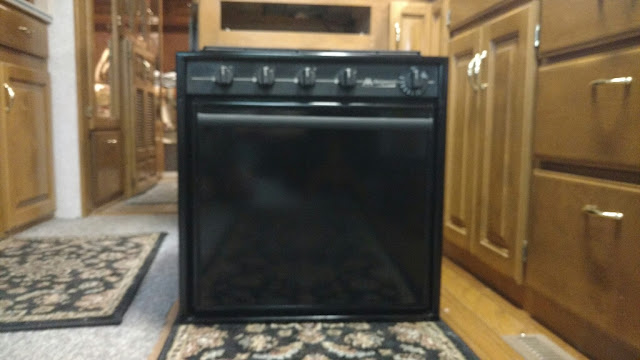 I found an extra rack on Ebay, that will fit this oven. I ordered it and we will get it next week.

Stay tuned for part 2 of this blog. That won't happen until later, because today we are heading up to my brother's cottage to help with the plumbing.

It will also give Steve time to heal from his little boo boo. The first casualty on the job as he ripped open his thumb on a screw. 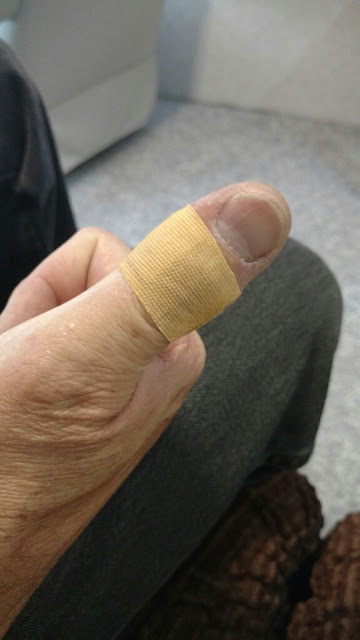 Posted by KarenInTheWoods at 9:16 AM