My Mighty Fisherman is HOME!

My darling Steveio took off for 9 days....  (that is why I was working on a bunch of projects by myself!)

Once a year, he joins his brothers and father for an annual Father's Day Fishing Trip.  Sometimes they fly into Canada to a remote cabin, sometimes they go more locally in the motorhomes to northern Wisconsin or to the U.P. of Michigan.

This year, they added a nephew, Andrew, to the group... and he supplied us with some photos.  Once Pops and Pete get their photos ready, we should have a few more.....  Thanks Andrew for snapping some shots of your adventures with all your crazy uncles and grandfather!

THIS is what it is all about.... Fishing! 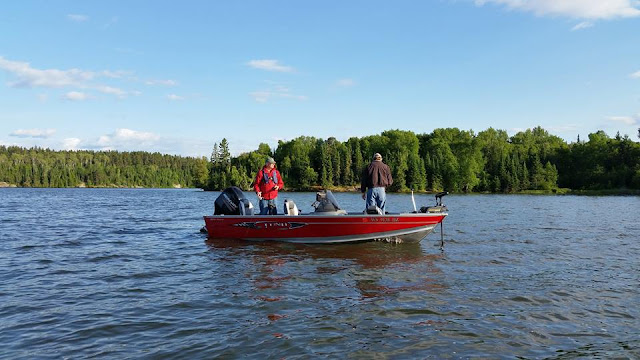 They were at a wonderful resort in Canada, about 165 miles north of the border past International Falls, MN.  It is called http://www.therriensforestlakelodge.com/   It was a total of 650 miles from our home in Chilton.  Our friends Jim and Norma go there every year (sometimes twice a year!)  and highly recommended it. They furnished Steve with lots of details and lists in advance of what to expect, what to bring, and what you didn't need to bring because the resort furnished it in the cabin rentals.


I like this pic the best...
great shot, Andrew! 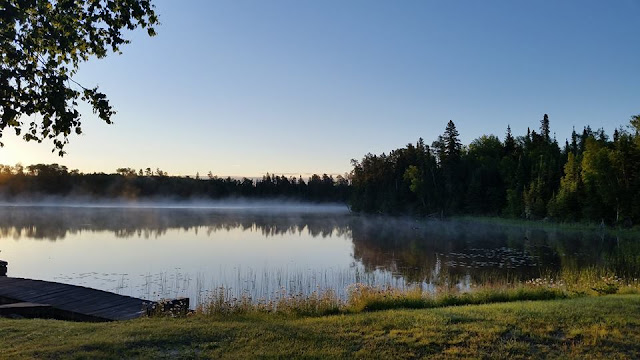 The resort is remote, private and has only about 10 cabins to rent.  You can bring your own food to cook in your own kitchen, or you can opt for the owners to cook meals for you up in the main lodge for an additional fee.

Steve poured over his shopping lists in advance, and planned all the meals.  Some groceries they could bring from the United States, but other things they had to pick up in Canada --- as certain items are banned from coming over the border. (like meats, potatoes, produce etc) 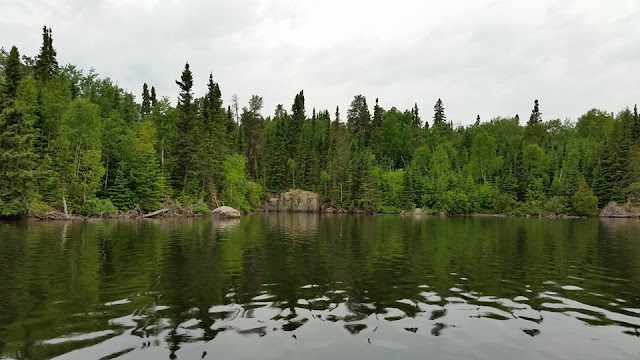 They supplemented their meals with fish too, of course. It seems this province in Canada has some new rules. You are only allowed TWO fish per person! Even if they are cleaned and in the freezer you cannot catch more until you eat up the two of you have. So between the five of them they could only be in possession of 10 fish total at any given time. They did a lot of catch and release. And eating.

The owner's son, Blair, was hired to take them out and guide them to all the best fishing spots. He actually spent three days at different times taking them around and showing them good places for fishing.  He came and spent some time with them in their cabin too, for a few beers, jaw jacking, and card playing.

Steve said the loons were singing every morning and evening.  Andrew caught a few good shots of them close up from in the boat. 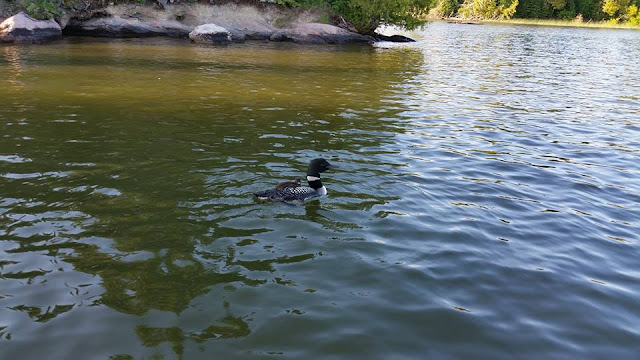 They brought along brother Pete's boat behind the truck so they had one boat up there for fishing, but they also rented another boat a few times so everybody could go out at the same time instead of taking turns. 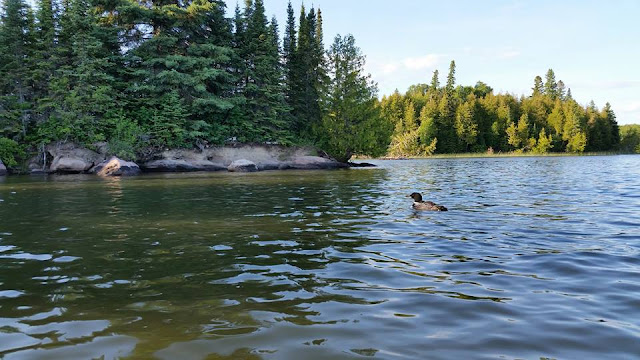 The weather was pretty good, it wasn't too hot. They had a few rain storms roll in that splattered a little while, but then let up. All in all, Steve said it was very pleasant weather and not uncomfortable. Bugs were at the minimum too. The little cabins had a wood stove that you could light in the morning just to take the chill out. By midday everything was comfortable again for short sleeve weather, 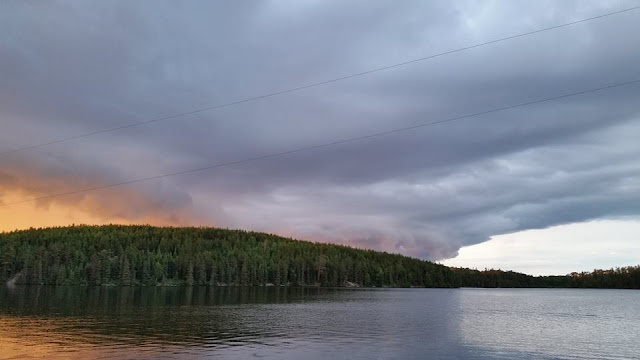 The place has very nice facilities for fishing, docking boats, and even gearing up with bait and heading out everyday to a new area to fish. It is connected to a Forest Chain of Lakes known as Indian Lake Chain, with something like a hundred sixty miles of shoreline? 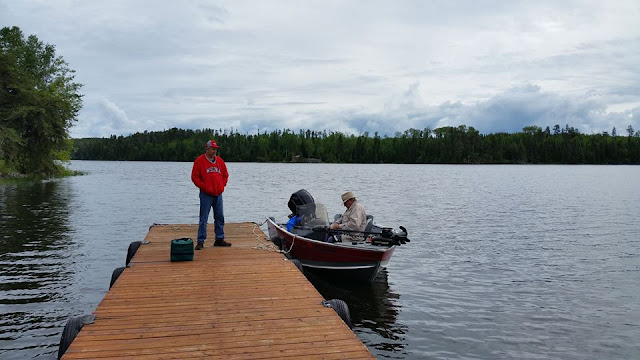 Right by the docks are two pet Muskies (muskellunge fish) . They float along and look totally lazy like a couple logs in the water. Until you toss in a couple of these little feeder fish, then you see them spring into action to eat. They know where the good food is, and they know that nobody's going to catch them or hurt them as long as they stay in this nice safe little area next to the fishing resort. A couple of spoiled rotten pet fish!!! 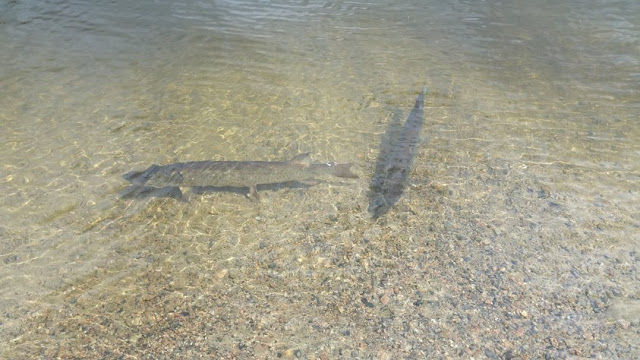 The guys got in a lot of napping, card playing, as well as farting burping and snoring. Typical guy time. While hanging out in Paradise! 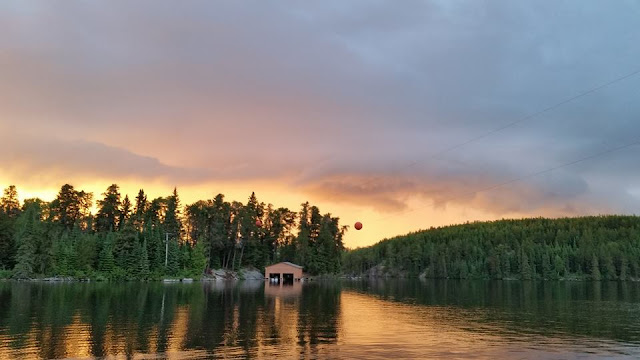 Steve took care of most of the cooking, while the others helped with cleanup. They all got in lots of fishing, fresh air, eating, book reading and naps! 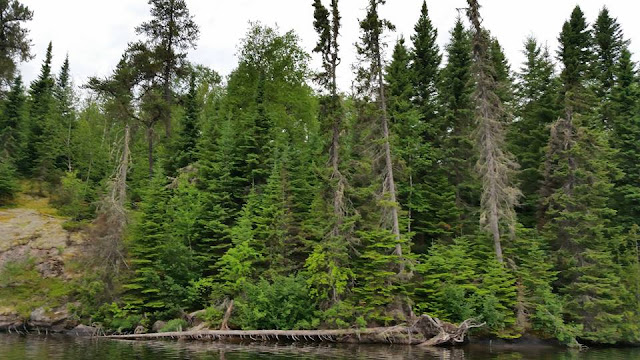 There was also a bear that was ambling through the camp from time to time. I guess Pete has some pics on his camera of it. 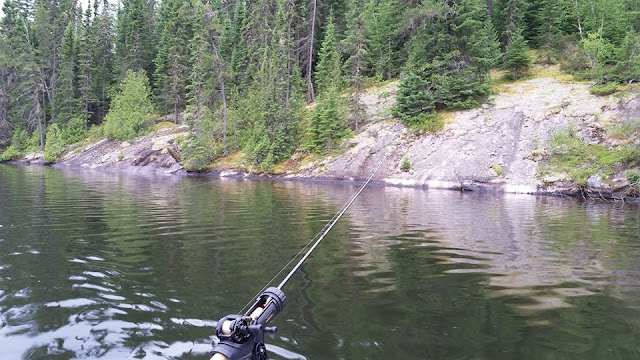 The prettiness and wilderness is just so pleasant. 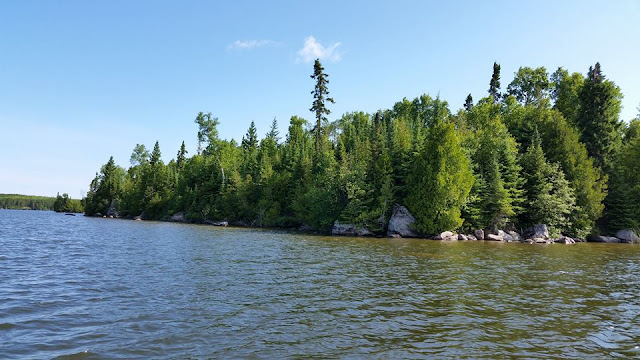 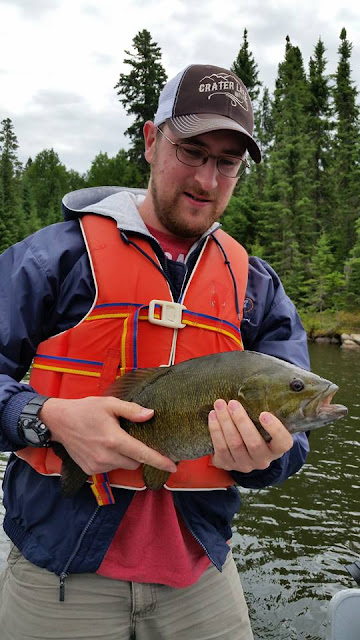 And Pops, in his glory! 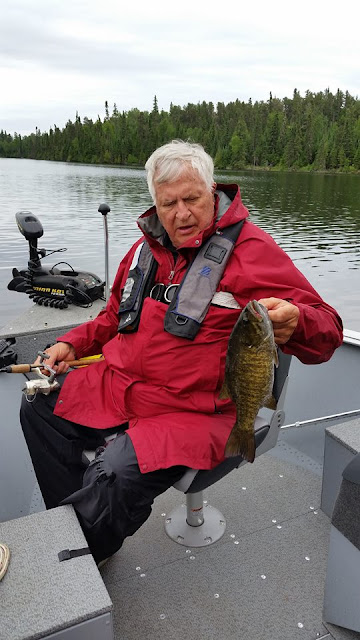 Surrounded by his male family members: sons Mark, Steve and Pete, his grandson Andrew... enjoying his goal of fishing in Canada. After his knee surgery this past winter, he set the goal of being able to go fishing again. All through his physical therapy, the only thing he talked about was going fishing to Canada with his boys!

I even sacrificed celebrating our 20th wedding anniversary while Steve was gone. I said it was more important for him to be with his brothers, dad and nephew, creating memories. We are going to celebrate this week together instead. After 20 years of marriage plus 2 years of dating, what is another week? 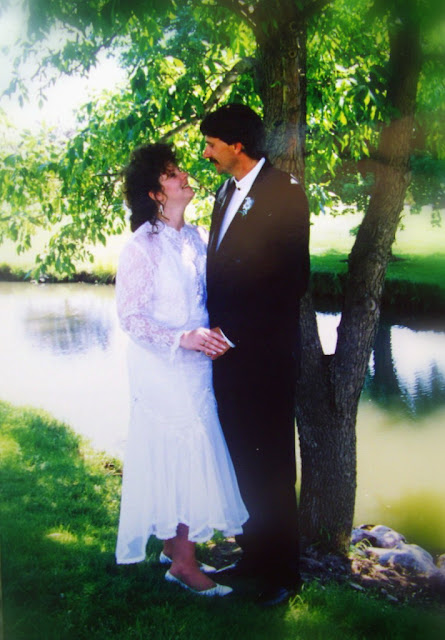 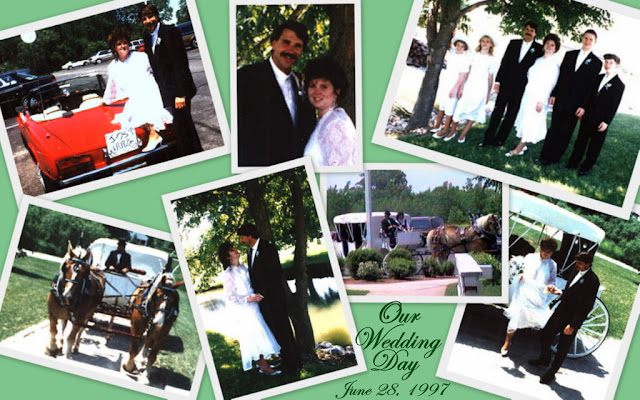 I am so glad he is home again, and our lives are back to normal. While he was gone, I babysat Pop's dog, Millie. She took up Steve's whole side of the bed so I wasn't lonely.  But a dog snoring next to me just isn't the same as a husband, ya know?

Posted by KarenInTheWoods at 8:58 PM