Reinventing the Wheel.... Spinning Wheel that is!

I find myself sooo fortunate to have moved to an area so rich in fiber groups (or guilds as they are called) of people who share my same interests.


That is where I had to go last night.  The snow was blowing and swirling around by 6pm when I left for the meeting.  I drove our little Tracker and put it into four wheel drive as the roads were getting worse. As I traveled closer to the Lake Michigan location the "Lake Effect" snow was falling harder.  This phenomenon creates more snowfall closer to the water, and this area suffers from that condition. I followed a little old lady who was crawling along at 25 miles per hour, almost going in the ditch three times.  I wanted to go around her and get to my destination, but I felt I should follow her in case she DID need help.  Finally she turned into a driveway near St. Nazienz, so I was able to arrive at my meeting only 10 minutes late.  Seven of us fiber folks braved the weather to get to the meeting.

I arranged for the group to listen to a guest speaker named Chuck Spann, who is a talented woodworker. 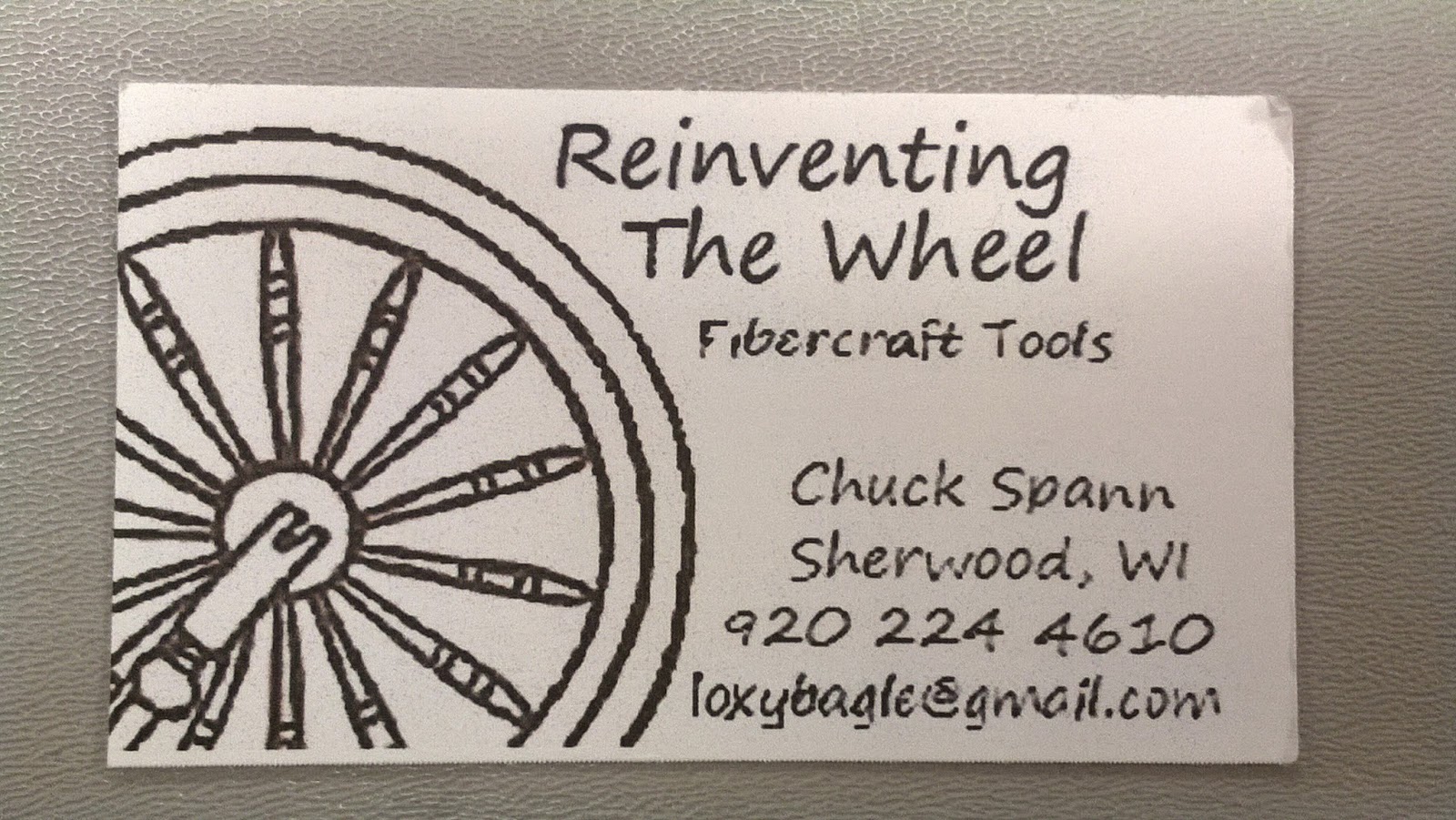 He loves to create and make things of exotic woods. He has a workshop in his home to restore vintage spinning and weaving tools. I met him a while back, and he did some restoration work for me on a wheel.

Here is the blog post about that:
Restoring a Daneker Spinning Wheel


Here is where we meet, in the upper loft of the retail shop at
Hidden Valley Wool Farm and Fiber Mill 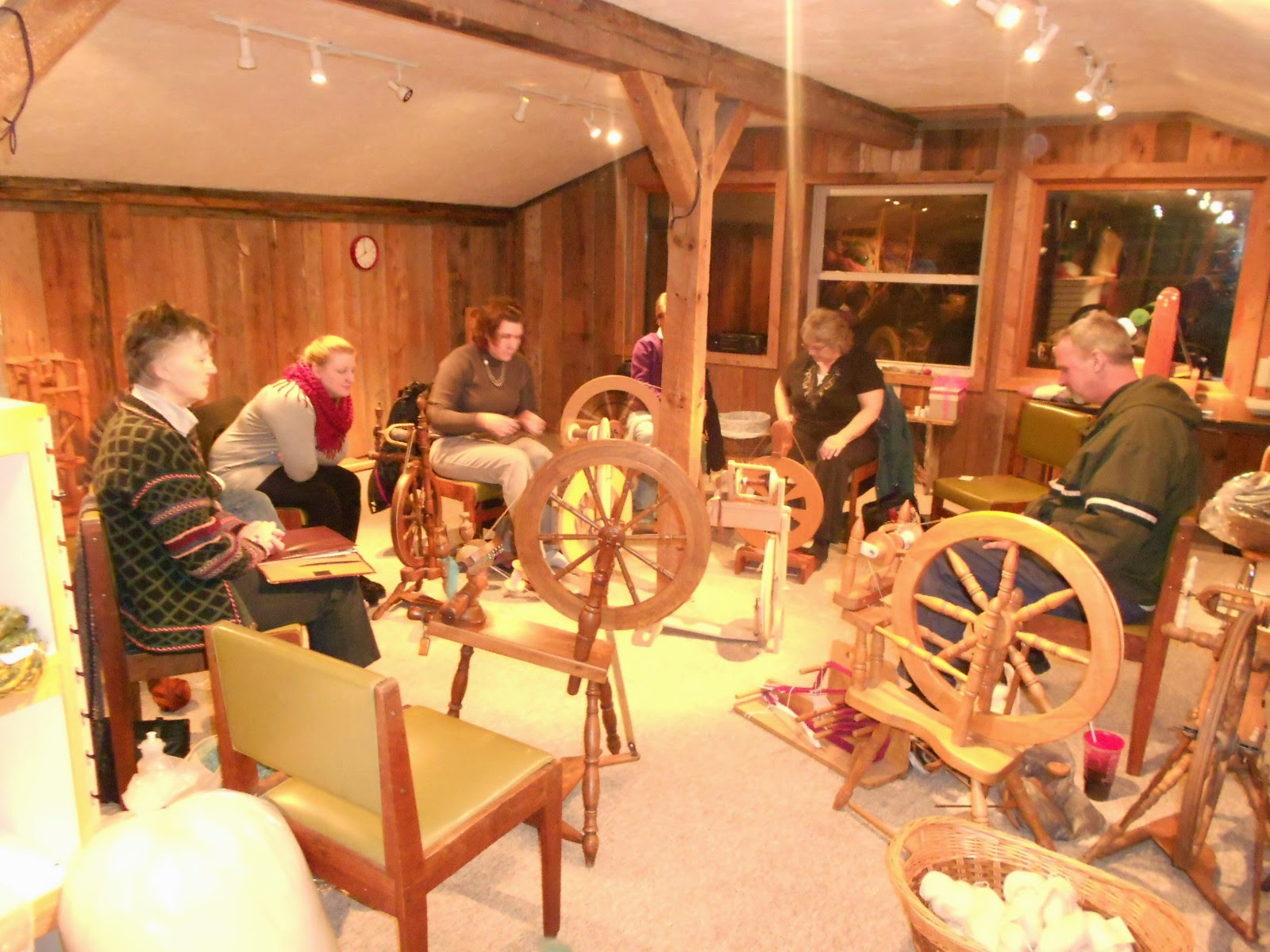 Chuck had brought a nice array of his prototypes of some new wheel designs. This one pictured below is an oak wheel with sturdy base and a nice large bobbin.  Large bobbins are great to spin a lot of yarn in one long continuous piece instead of using smaller separate bobbins. The wheel is small enough to store easily, and great for traveling.  It is only in prototype stage and he not yet making them for the masses.  He needs more time as he still works as a craftsman for a large yacht building company.  We said he needs to retire and make these fun tools full time! 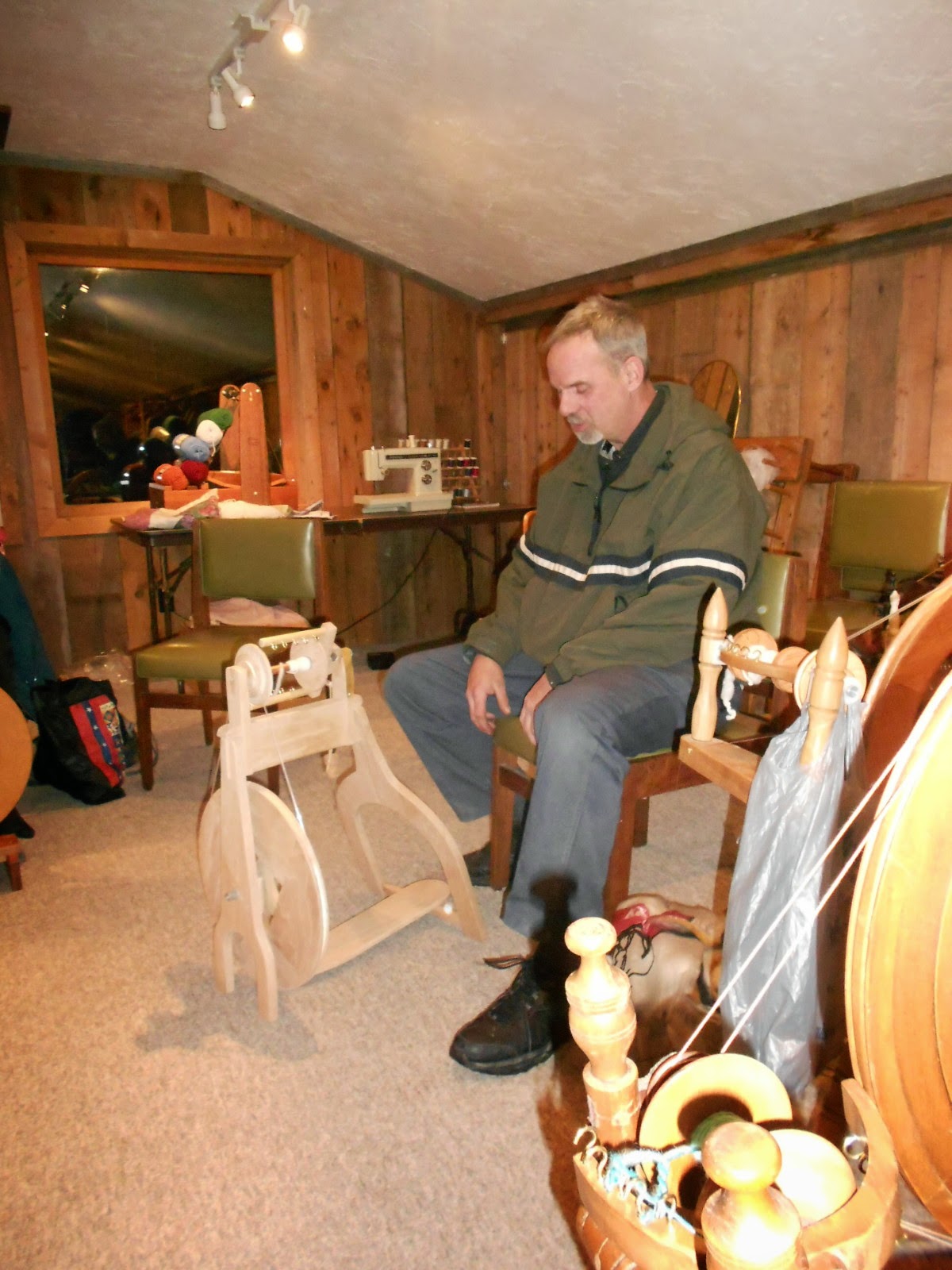 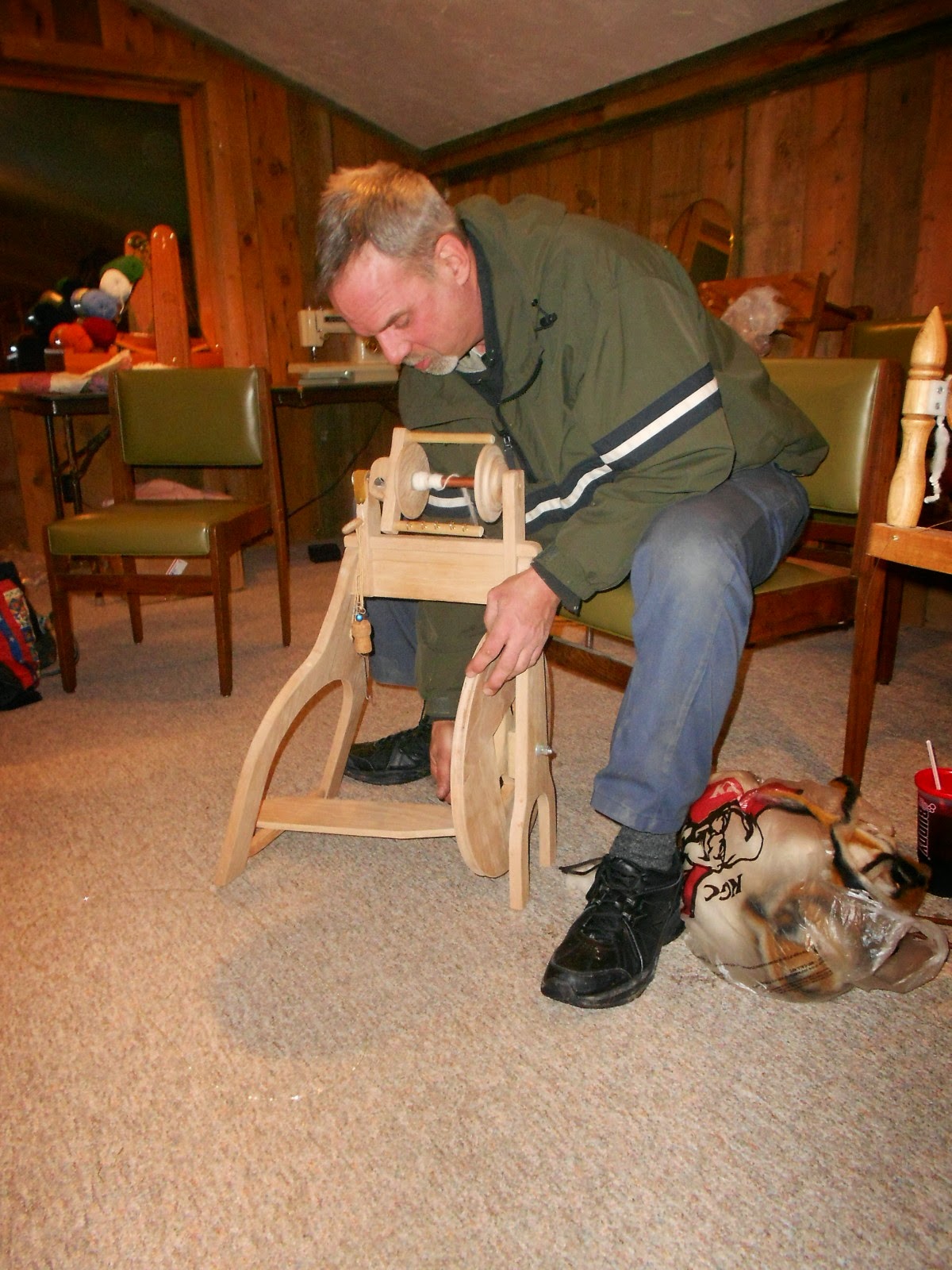 Chuck makes these lovely drop spindles of a Turkish design.  What is great is that the two cross pieces of wood can be slid out once the spindle is fully loaded with handspun yarn.  Then you only have to slide out the pieces and the result is a finished ball of yarn. 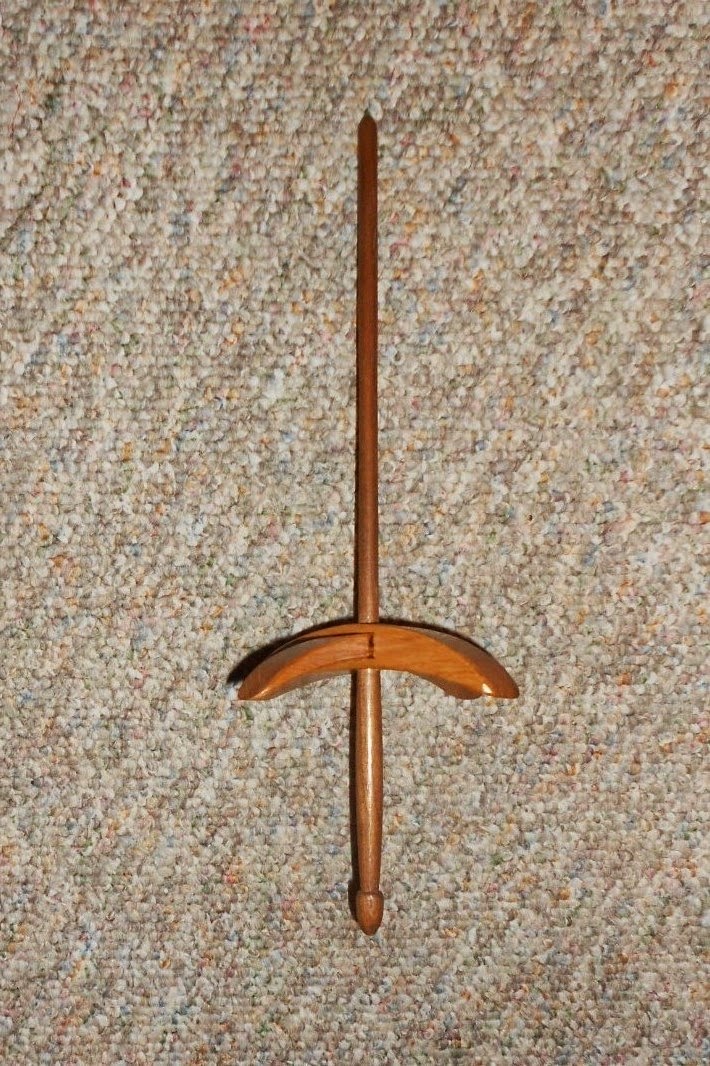 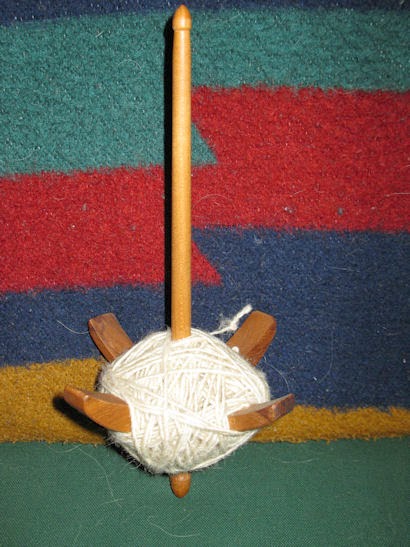 Another spinner, Stephanie, is demonstrating to the group how well they work.  These Turkish spindles offer very easy portable spinning, which can be taken along in a car, using it while waiting for doc appts, long lines, visiting boring relatives, or just for having fun! 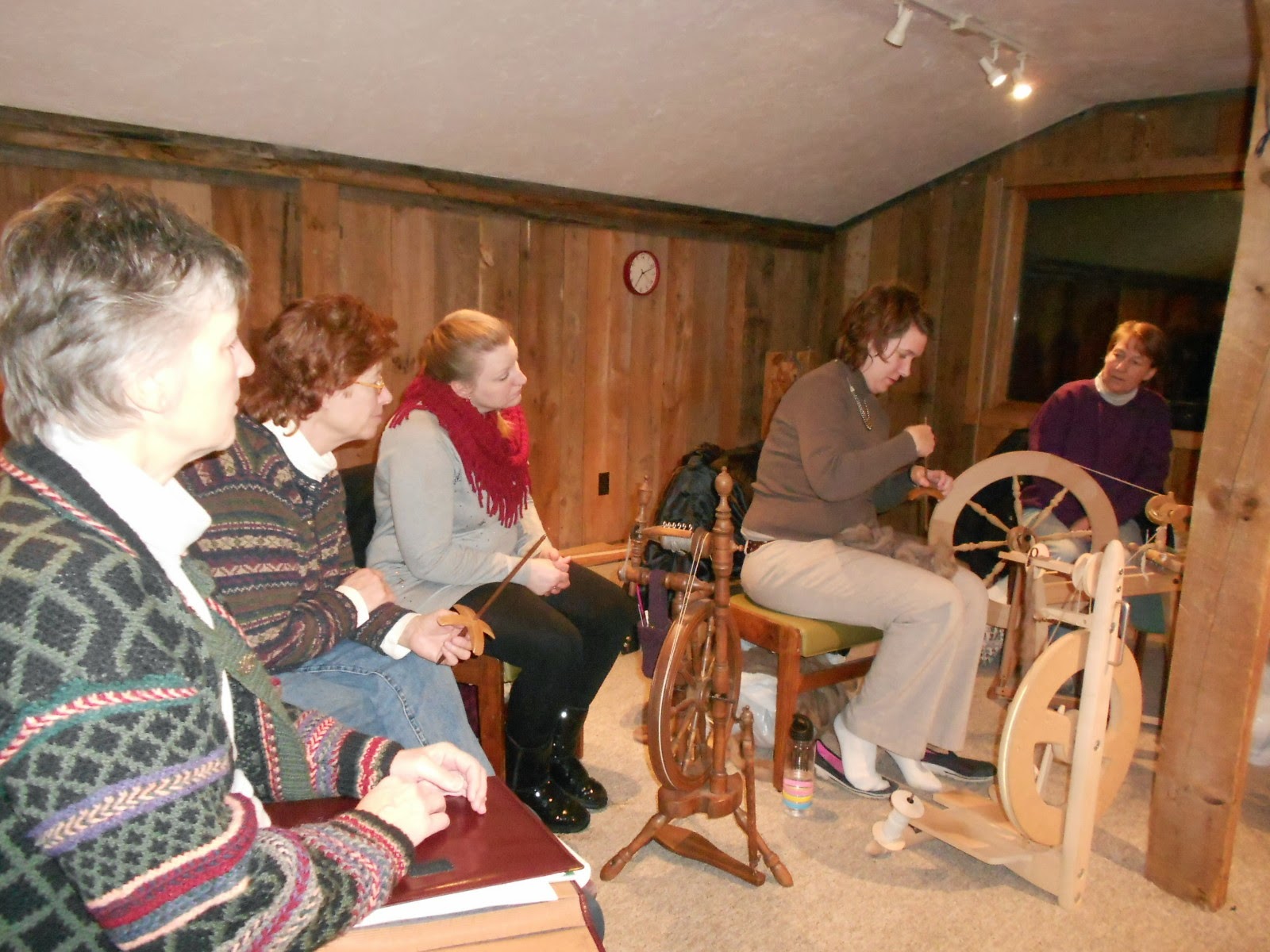 Chuck also brought along a weaving device known as an "inkle loom". These looms are used to make woven straps with intricate designs or patterns if wished. It's a small portable device, plus children can catch on to this process easily and learn to weave on it. 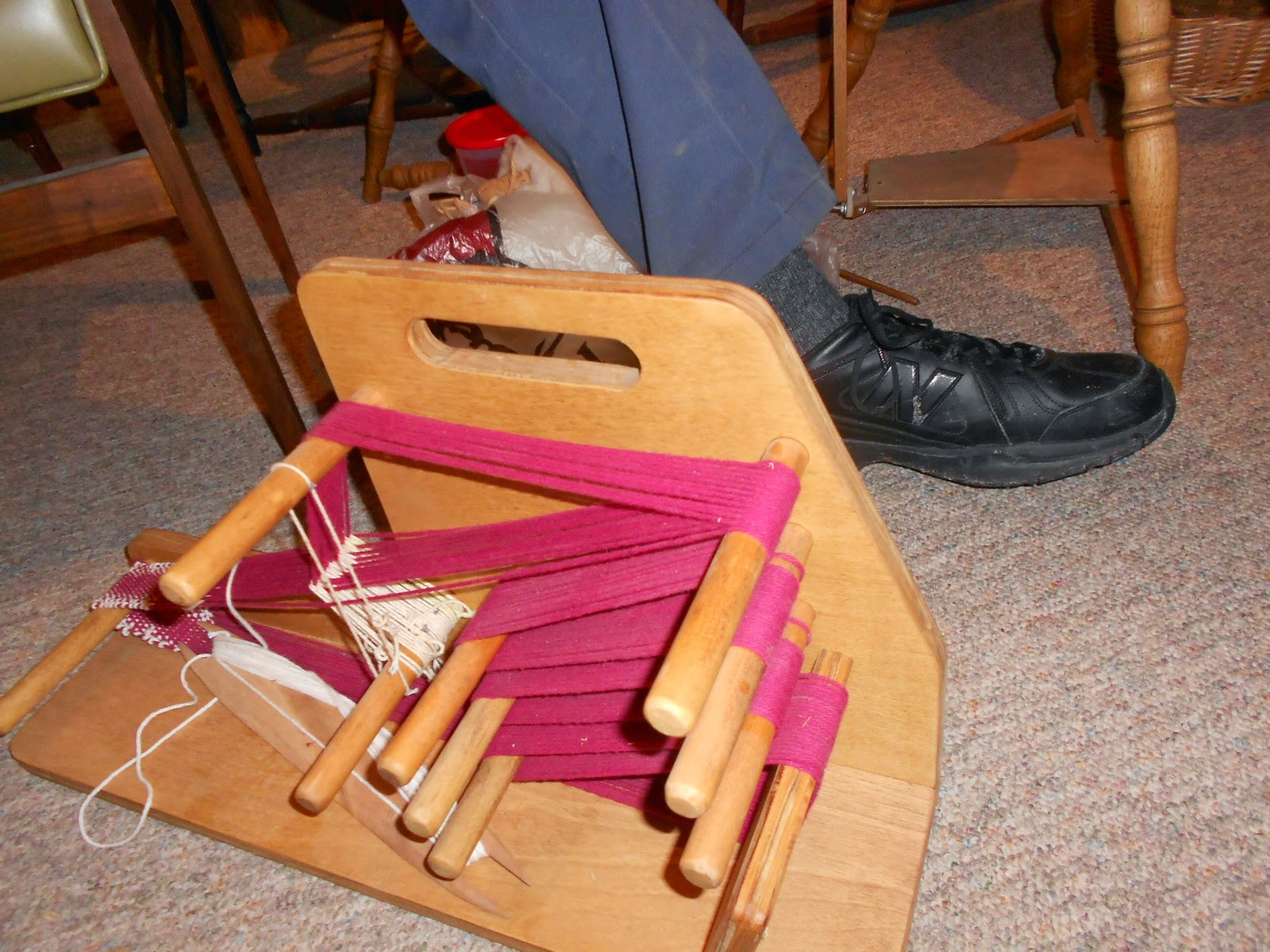 Guitar straps, belts, trims and decorative textiles can be made on these small inkle looms in long woven portions, or in shorter pieces they can be bookmarks, or as trims in cardmaking or scrapbooking. 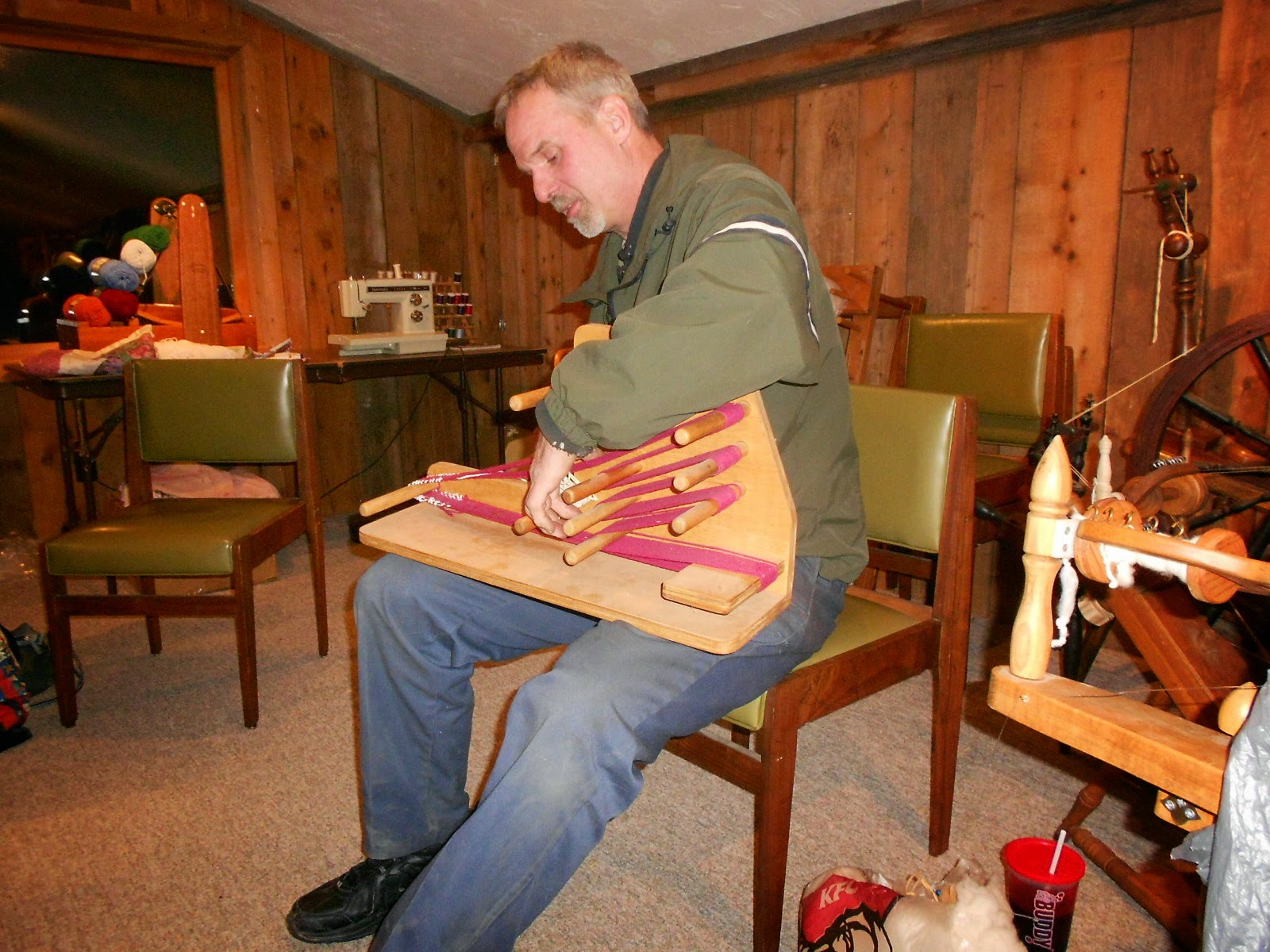 Here is the Daneker spinning wheel that Chuck restored for me.  He also made three larger custom bobbins for it that are so much better than the original small bobbin.  It spins like a dream, and gobbles through my fiber at a hungry pace, and creates lovely soft skinny yarn for my sockknitting machine! 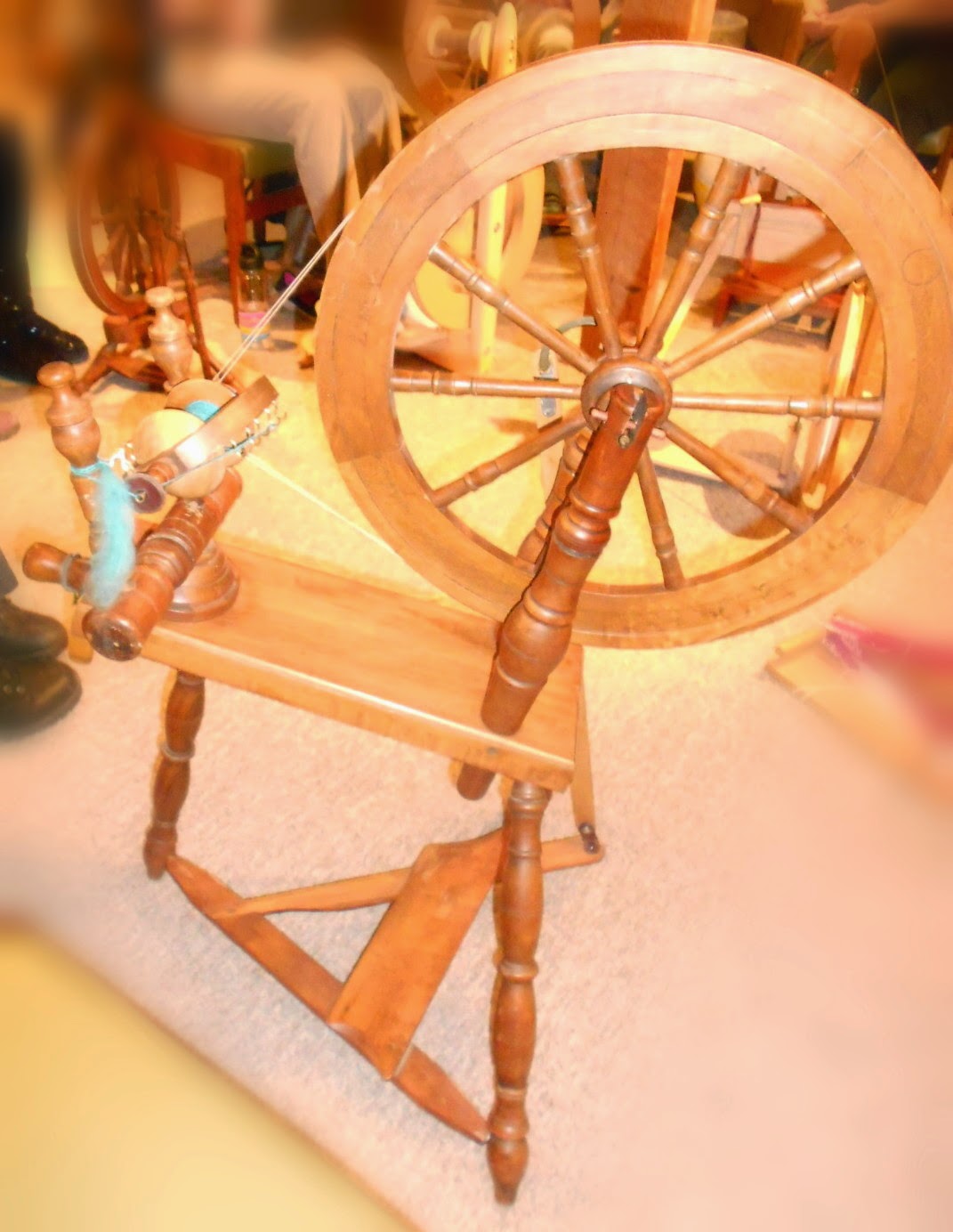 Last, here is shot of some of the spinning wheels in the loft at Hidden Valley Wool Farm and Fiber Mill. Carol grows the sheep with great fleeces to shear and process. We buy the fluffy clean fiber to spin up into yarn. Then we can knit, crochet or weave the yarns into textiles. It's so easy to be creative when surrounded by such wonderful inspirational tools! 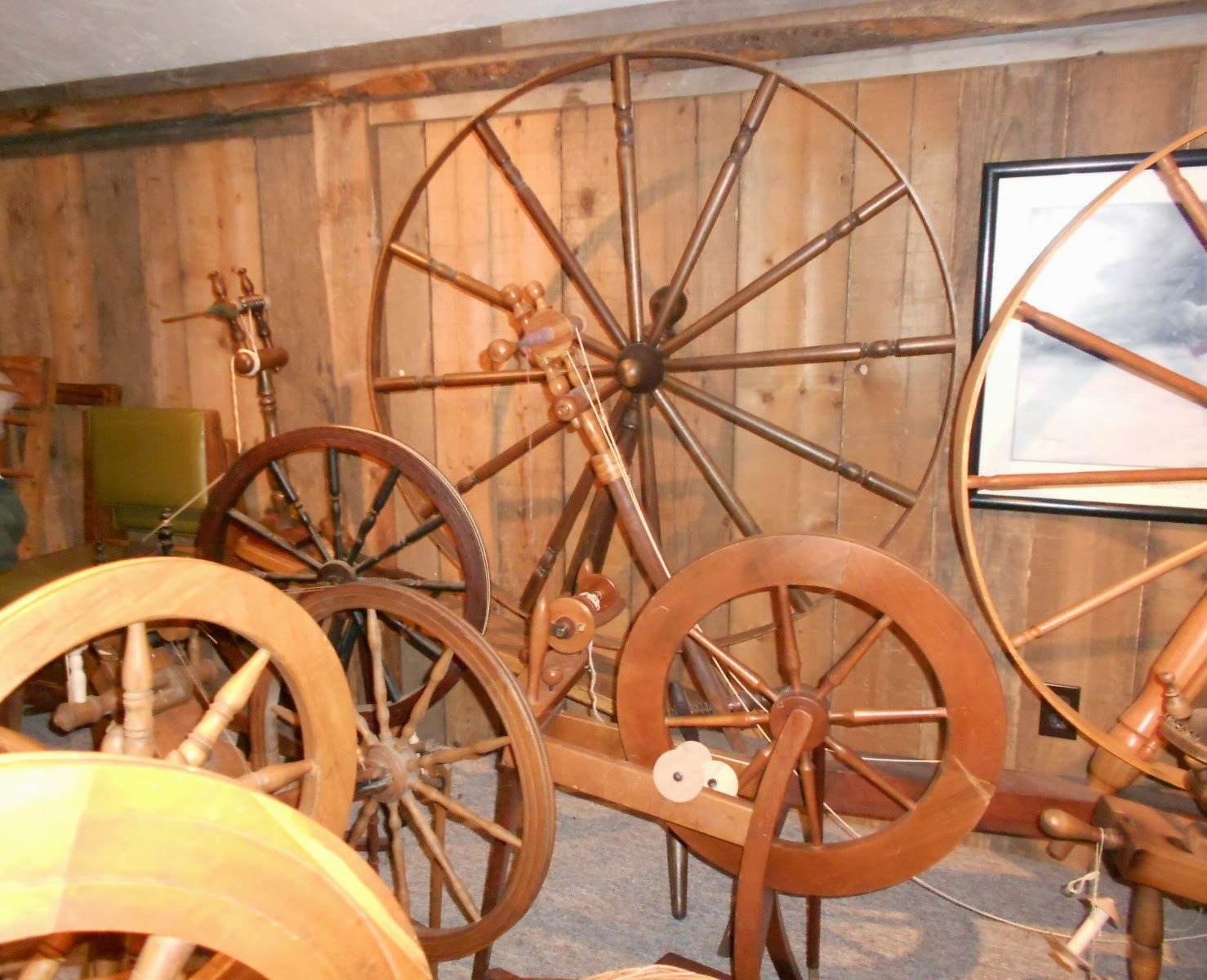 While I was gone to my meeting, my darling Steveio was at home doing some preventative furnace work!   There is a little device on our furnace called an "Inducer Motor" that blows the exhaust air out of the energy efficiency plastic pipes out the side of the house.  If that little motor quits, the furnace will shut down before allowing noxious gasses to get into the house.  Our little motor has been making funny noises lately, like a loud whirring buzz of a bearing going to heck.

We decided to bite the bullet and replace that part now, before we leave for a 6 week vacation.  We do have a wi-fi controlled thermostat that shoots us a warning if the temperature in the house ever drops too low or if the furnace malfunctions.  But if this part goes to heck, we would have to get the house sitter to arrange repairmen access, pay a service call, and probably at emergency rates because things like that seem to go to heck during the nights or weekends!

Being handy, my dear Steveio decided to just order the part and change it himself.  Of course, the danged part was $550.  Ouch! The first part I picked up last week was missing the wire harness from the box.  I called back and they figured some technician robbed the box while on the shelf for the harness.  Oh vey!   So they ordered another one and it came in yesterday.


(note: this is a rare photo of a MAN reading DIRECTIONS!) 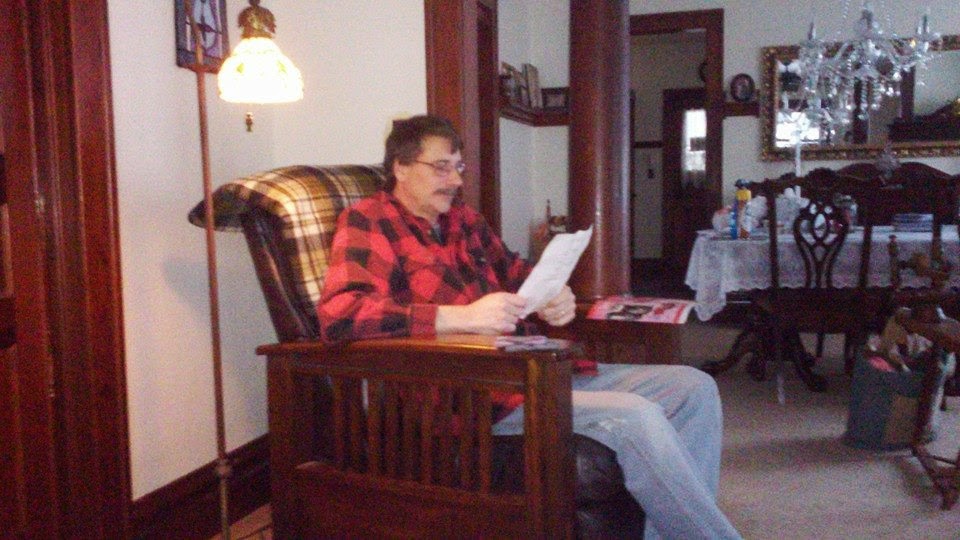 While I was gone to my meeting, he zoom zoom zoomed to get this project done.  He turned the furnace off, replaced the part, and got it up and running in no time flat.  He said it was an easy repair job, and he did the adaptation of some older part removal with a newer format, so more had to be removed than what was installed back in. Hey.. that means parts leftover???  But he did it all, with no service calls.  Saves us a lot of money that he is so handy. What a guy!

Ahhhh so that is more thing that we should not have to worry about
while we are gone on vacation.

Posted by KarenInTheWoods at 10:09 AM