Heading for the Border

We said our goodbyes and thankyou's to Harold at Emergency Truck Services again for doing such a great job, plus letting us stay in his parking-lot for two nights while our replacement brake lines were being fabricated.  What a guy!

Steve looked a bit closer at the Tracker and he started it up and drove it up behind the motorhome to hook it back up. It's a clunking which means probably the bearing and push rod.  He MIGHT be able to drop the oil pan, change out the bearing and push rod, and it might be good to go!   But this is something he can not attempt to do in a campsite, so we will tow it home and he will do it there. Unless he finds someone local that can do it around here in a short time span.  We don't want someone to tear it all apart and wait three weeks for parts etc. So fixing it at home makes sense.

Some folks suggested leaving it somewhere and picking it up on our way back.. good idea, but are not coming back the same way. We are just about at the end of our westward trek and will probably be swinging north and then east.

In the meantime, we can get by without a toad vehicle to run around. We have done it before. It just takes more careful planning in between stops to get what we need while we are going on to the next place.  It's kinda hard to take a 40 ft motorhome to run into town to get a few groceries,  LOL ....

We may have a friend from Canada joining us after the weekend and if we really need something, he could be persuaded to take us, he said: "for the right friends".  I guess we qualify?

We slid right through Deming and found our way 30 more miles down on Hwy 11 to the small border town of Columbus, NM.  We are in Pancho Villa State Park, which was about 1/3 full. It was about time to dump our tanks, so we did that right upon entering the park.  NICE dumpstation with a big wide double basin area accessible from either side.  High Cliff needs one like that, Linda!

We have a nice corner site down on the far end, with water and 30 amp electric for $14 a night.  We paid for one night, but we are going to pay up through the rest of the weekend as we like this place. 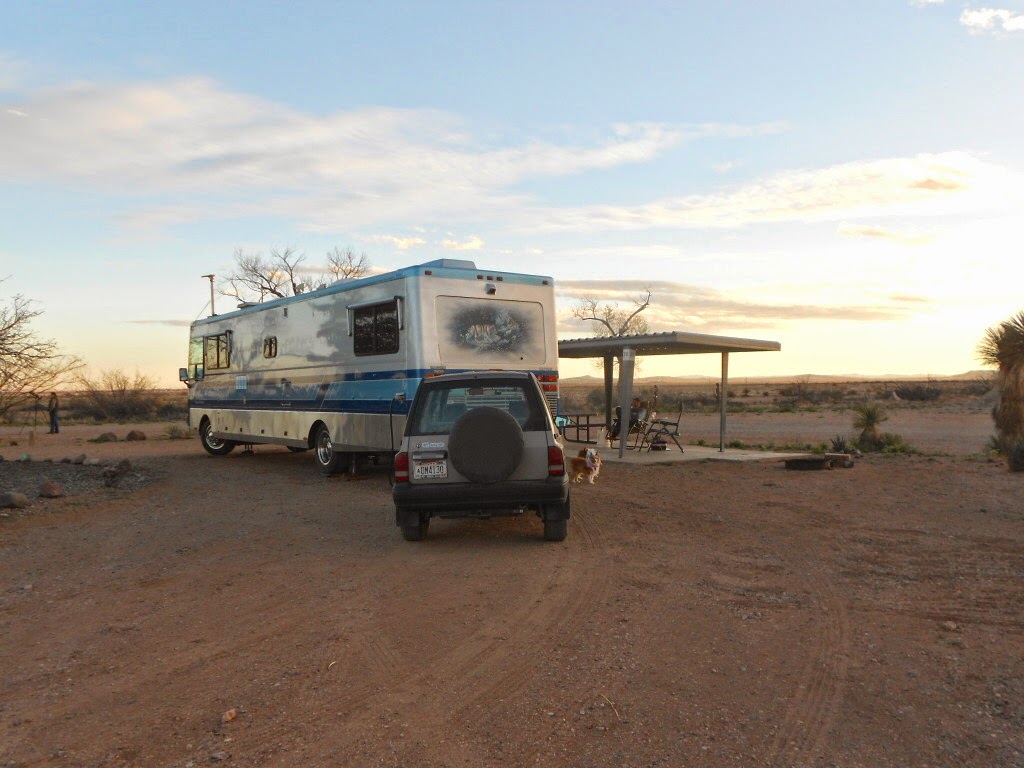 We walked around the little museum and visitor center to learn more about this area.  Columbus was the site of the ONLY time a foreign country ever invaded the United States on our own soil... Pancho Villa came across the border and attacked the Fort here in Columbus... 8 of our soldiers and 10 civilians died, and many of the soldiers were hurt.  Then General Pershing led a retaliatory mission down into Mexico to go after Pancho Villa.  Although we tried, nobody ever caught Pancho Villa.

These cacti were growing around the customs buildings.  I think it's time to either cut a hole in the roof, or let the saguaro have it's way????  Although they are slow growing, I can not imagine the building outlasting the cactus? 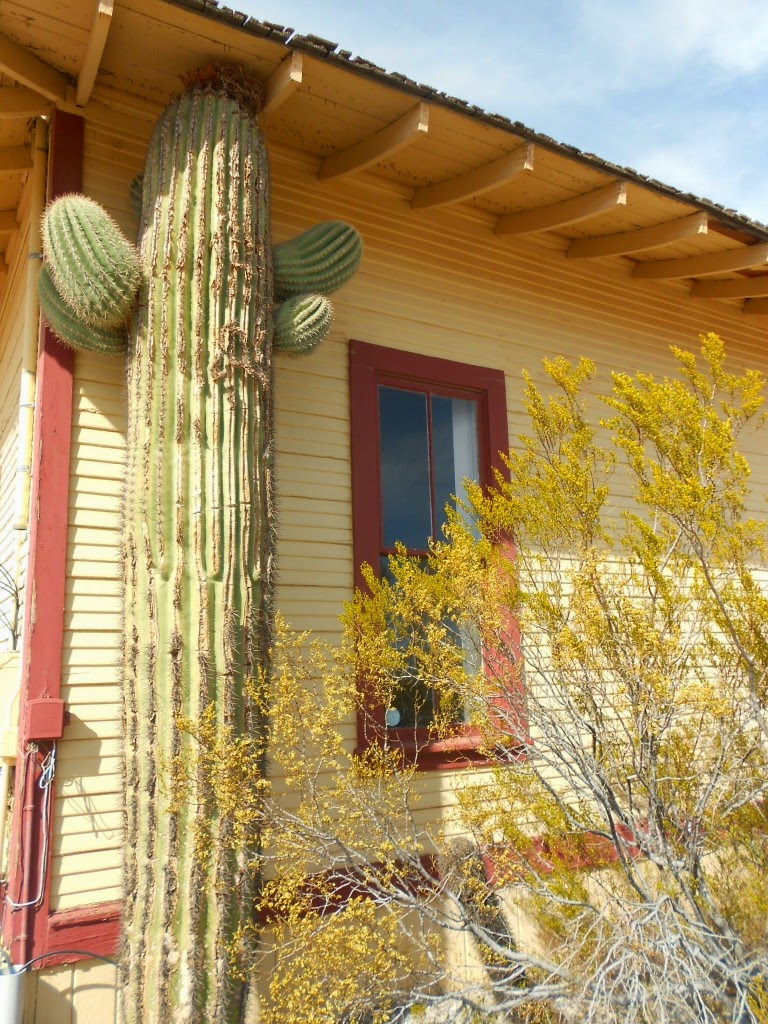 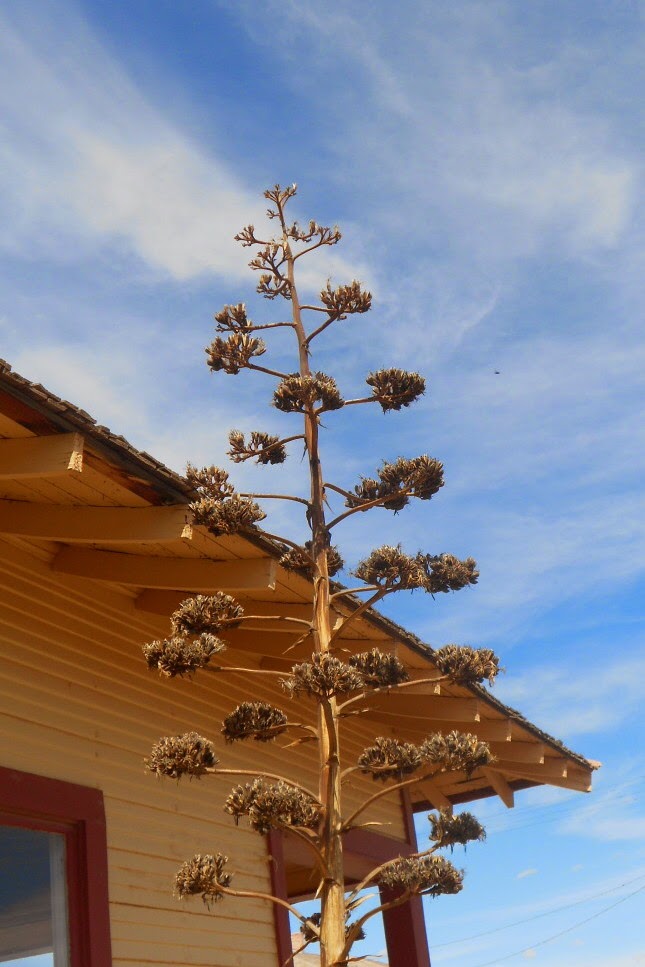 We walked around the sleepy little town of Columbus, and got some information about the bus schedule going down into Palomas Mexico tomorrow.  Since we don't have the Tracker running, we really didn't care to walk the 3 miles down to the border to walk across, especially if we are hauling back some shopping stuff.  We are told the bus runs three times a day from here down to there and we can flag it down at the corner of the State Park and the highway to get a ride!

We are going to cross over the border and have recommendations for a good dentist for Steve to have a tooth checked out at.  We had previously done a lot of extensive dental work at a dentist over in Los Algadones, near Yuma.  We would go back to him in a second if we were closer to his location.  But we got three people recommending the dental office of Fierro Dental Clinic.  We are going to have them look at Steve's tooth and see what we should do.  It's been bugging him for a few weeks now and he was hoping it was just sinuses.  But now with the dry desert air, the sinuses are clear (NO snoring!)  and the tooth is still tender and hurts when he bites hard. It might be cracked. Time to go in....

I want to do a little shopping and we will stop for lunch at the Pink Store of course, which is world famous for it's food, art and pottery items.  We will see what we will see I suppose.....  and yes, we have our passports and we have done this before.  The nice host lady next to us will be keeping an eye on our dogs and our rig while we are gone.

We went into a cute little museum in town sponsored by the Columbus Historical Society.  I finally found some postcards to fill out for the grandtots.  So far, in all of our travels, I have not found any stores that sell post cards!   Can you imagine that?  I suppose in our days of emails and texts and tweets, the good old fashioned post card is getting out of vogue?


Steveio hanging out by the luggage and steamer trunks,
waiting for a train on the tracks at the depot? 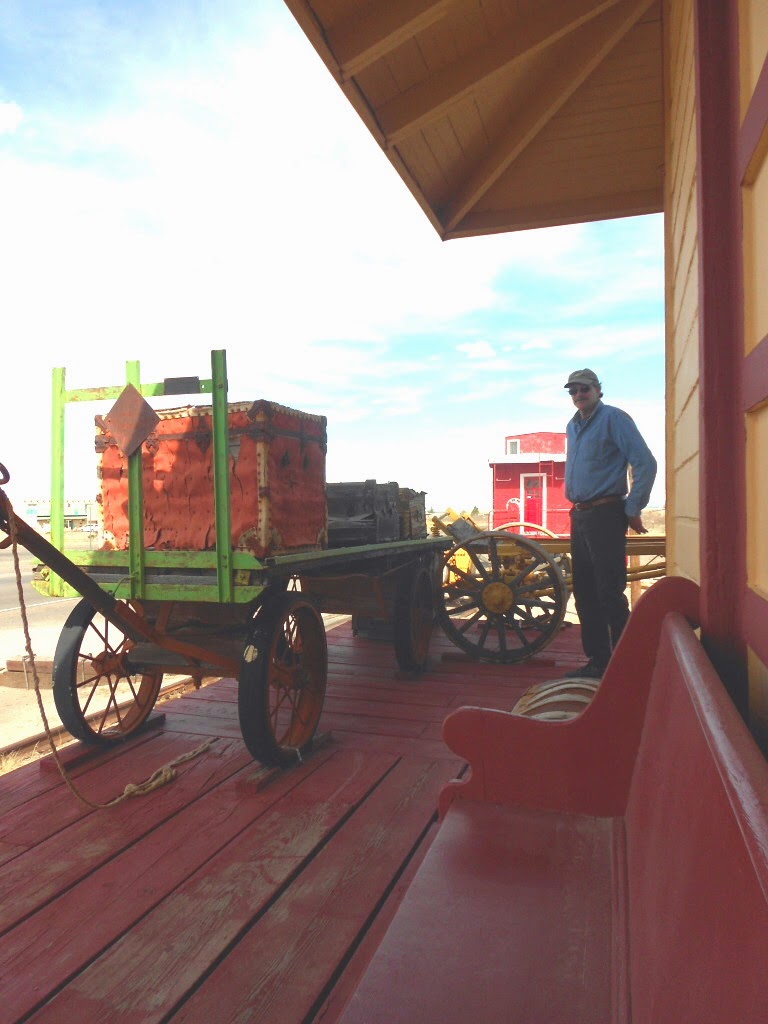 We walked back to the campground and wandered among the cactus gardens and shrubbery.  This is a very clean and well-maintained park.  Oh , and birds... LOTS of birds all over!  Nesting right near us in a tall pine is a Great Horned Owl!  The hosts said our site is the "Keeper of the Owl" and we are in charge.  LOL

A guy came by to set up a camera on a tripod to snap pics of the owls, and asked if he could encroach on our site a bit to snap some shots.  Of course! We watched for a while with our binoculars, and we will take some pics tomorrow when we have time.

Steve poured us a few beverages and we needed some lawn chair setting time. It's been a hectic few days, and I think sitting and relaxing in this park for a while is just the ticket. 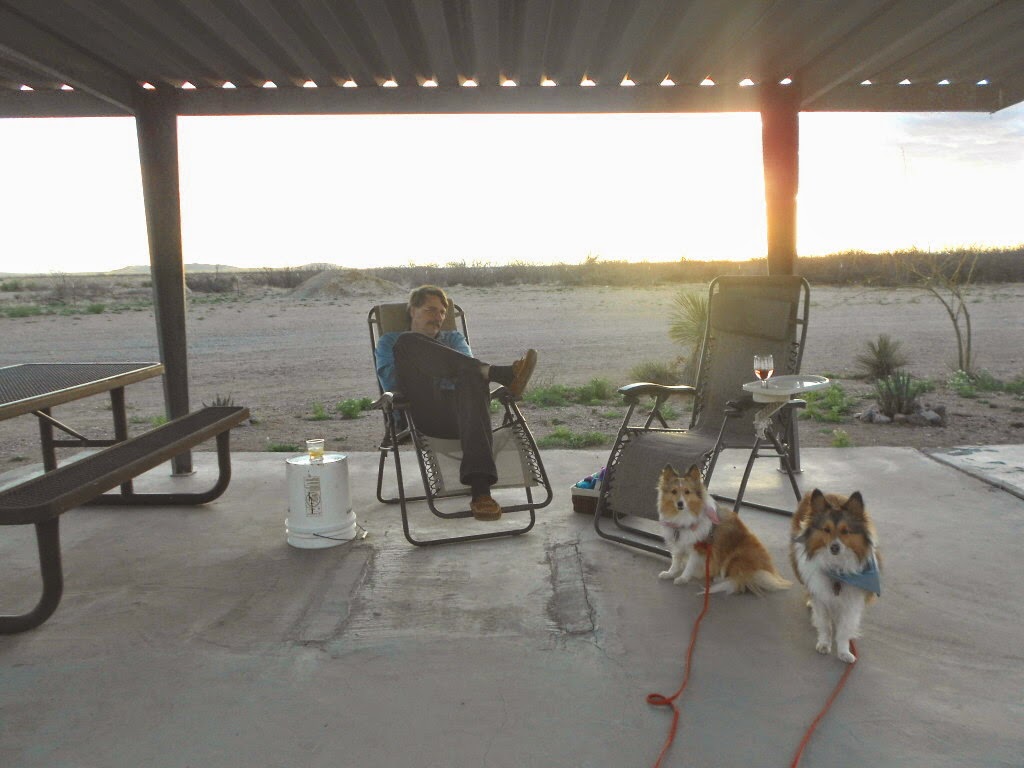 We are about as far south as we can get, with seeing all of those horrible storms to the north.  It's going to go below freezing tonight, even here, just 3 miles from the Mexican border!  The area we were in last night 100 miles to the north is all rain and winds and snow and freezing sleet tonight!  Glad we were able to move south when we did today.  Whew.... on the local news it sure doesn't look too pretty up there.  Or, for the rest of the country either!

I am glad we were able to escape, even if it is for only 5-6 weeks this winter.  Yes, we have had our repairs and troubles, but with a 19 year old motorhome, what can we expect?  We just have to roll with the punches and try to cope as best we can.  After all, we DO get to enjoy this setting instead of the ice and snow and cold of Wisconsin? 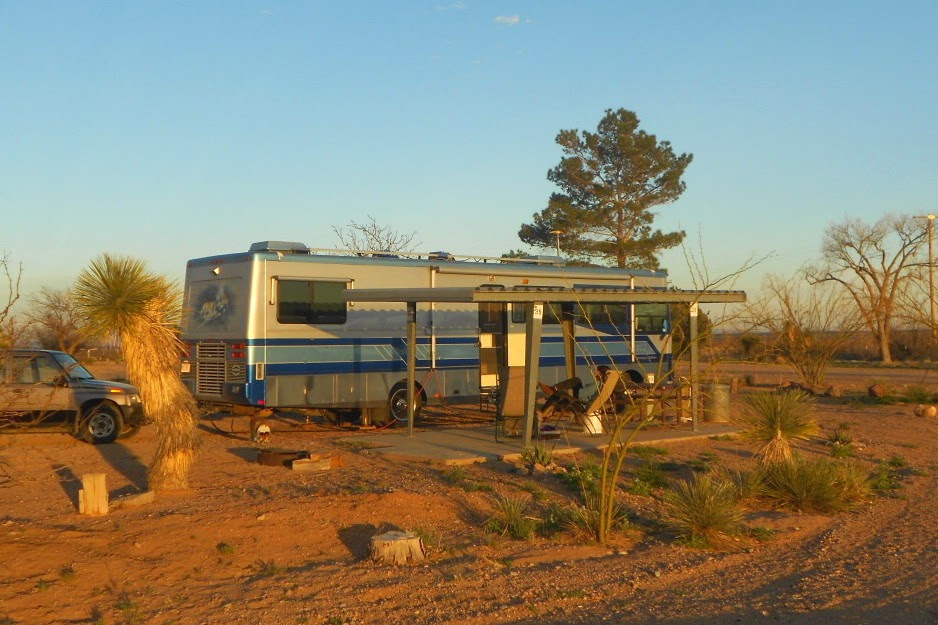 The sun was setting right out across from our campsite...
I could not decide which of two pics to post..... So I posted them both! 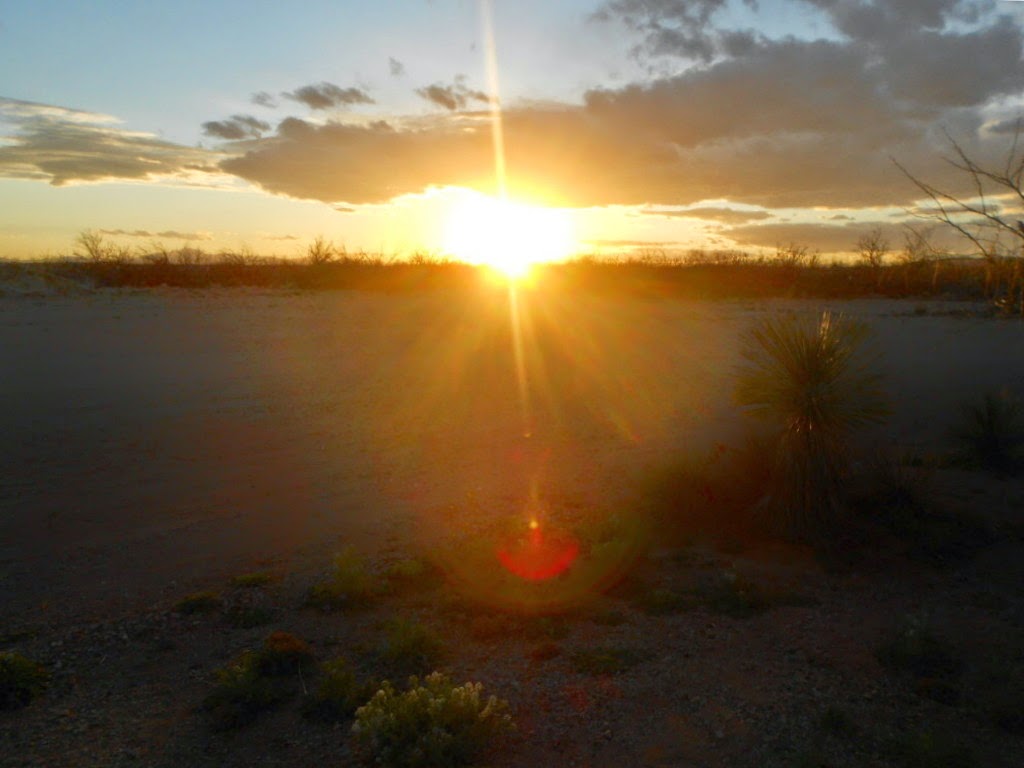