Safari-ite Gathering and then on to Oconto City Park Campground

We had a very nice time with John, (fellow Safari Motorhome owner) while at High Cliff State park on Wed-Fri.   On Thursday, other Safari-ites Mel and Paula came over in their car to the park to meet John and visit too.   (Remember, Mel is recovering Carotid Endarterectomy surgery so they didn't come camping)  but they got in the car and drove over the 120 miles one way just for a day time visit with us.


(L to R: John, Paula, Steve, Karen, and Mel sitting down in front) 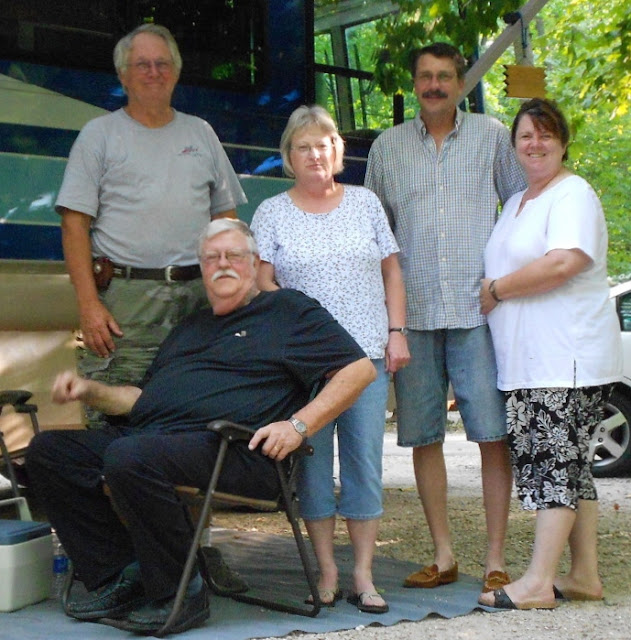 The guys jaw-jacked on and on about their rigs, and had out tape measures and brochures and manuals to add to their detailed discussions....  all about modifications, differences, similarities and plain ole Safari Motorhome talk. 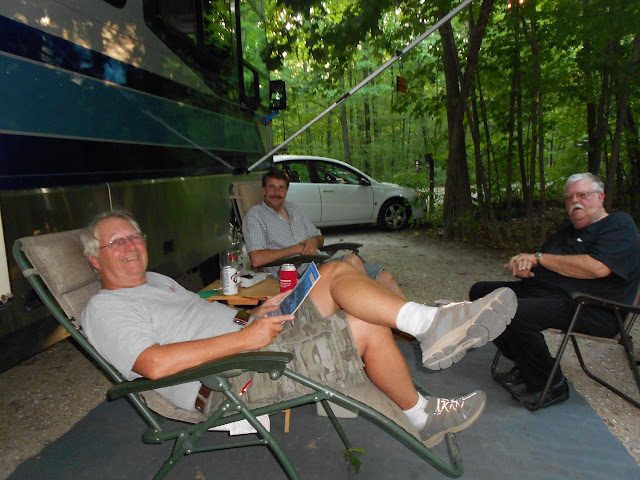 Paula worked on her quilt hexagons that will become squares, and I was busy spinning up some wool, but we listened in on their conversations to see what kind of goofy new ideas they were coming up with! 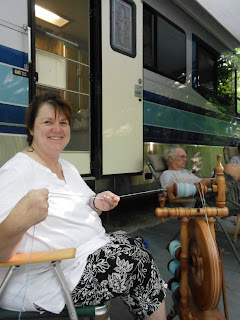 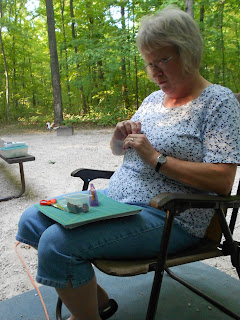 John had marinated a big bag of chicken wings to grill up, and Paula added appetizers and dessert. I filled in the gaps with salads and sweet corn.  Dang, we eat good when we go camping! 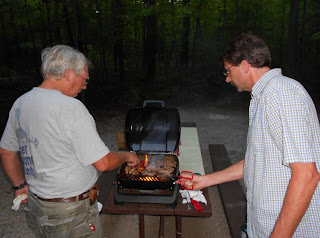 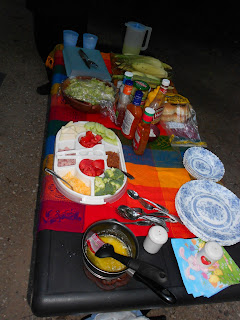 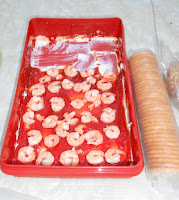 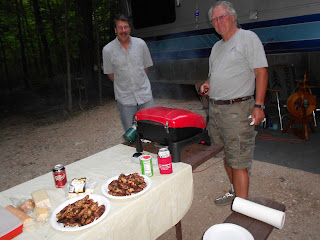 The guys gabbed well into the evening, but soon Mel and Paula had to head on back to Wausau.  I sure didn't envy them the long, long ride home again in the dark.  They sure wished they had brought their rig as there was an empty site next to us.  Oh well, there is always a Next Time.  We said our "good byes" and waved as they headed out.  What a great day!

On Friday, Steve had to work in the morning.... so John and I got our rigs "road worthy" and headed them over to the dump station.  Our sites were reserved for the Labor Day Weekend by other folks, so we needed to be off them by 3 pm.  Steve was supposed to only work till noon, because he had put in extra hours during the week.  Meeting up at the dump station seemed like a good plan.

We got our tanks dumped, rinsed, and I filled up with more fresh water (we had run out during the week because it had not been filled up to the top the way I like it.  Now it is!)

How often do you see two motorhomes of the same brand at a dump station? 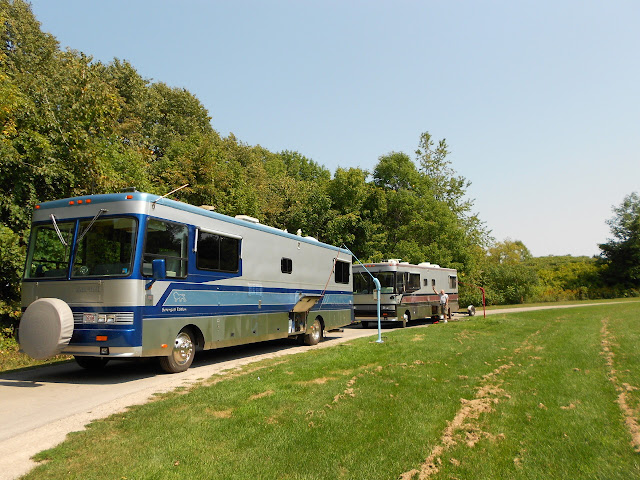 As time wore on into the afternoon, it turned out there was a water main break down near the park entrance.  Steve had no idea what time he would get done with work.  So John and I decided to drive the motorhomes up north to the next spot I had planned, and let Steve follow later in the Tracker to join us.

But I did it, and made it through about 15 miles of harrowing construction without a single scratch!

John, following behind, noticed our back shocks though were quite bouncy while driving through that rough stuff, so we might be looking at replacing them again soon.

As we journeyed northward, about 60 miles, John was getting a bit concerned.

Now, remember, this is Labor Day Weekend.  John said he thought I was "smoking something" when I said no problem, as we headed out to an un-reserved campsite on a holiday weekend.  But I knew a place that is rarely used, and we have only ever seen one camper in it whenever we wandered that way.  No signs or indications that this well-hidden park is here.... but we knew about it.

It's called Oconto City Park Campground, not to be confused with the other campground owned and operated by the City of Oconto (that one is named Holtwood).  This campground we were headed to is a small park with 9 campsites across the road from the picnic grounds and beach areas.

No hookups, no water, just a small portable outhouse in the campgrounds and flush toilets across the road in the picnic area.   $10 a night. 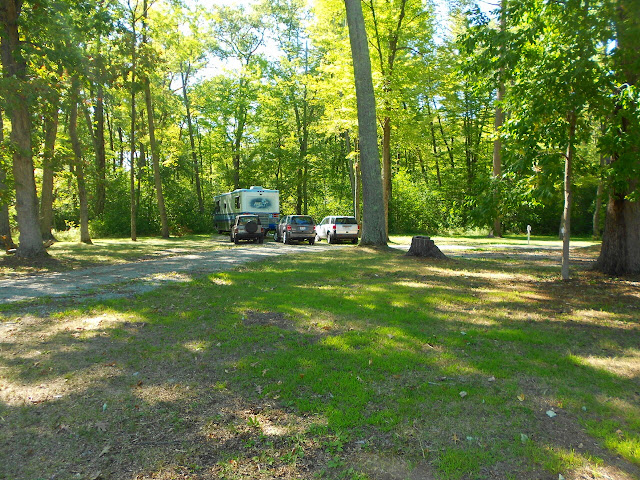 (those are our kid's cars parked behind us) 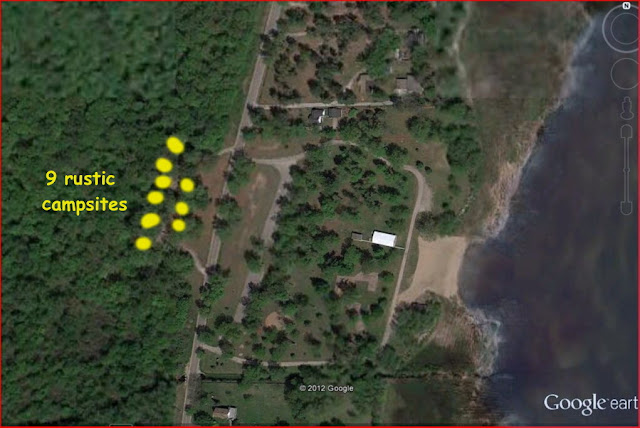 Across the road from the camping loop is a nice picnic area, pavilion with flush toilets, a water faucet and a wonderful sandy beach.  The waters are from the Green Bay portion before it flows into Lake Michigan.  Even dogs are allowed on the beach (on a leash)  and it's quite well kept up for a tiny little out of the way park. 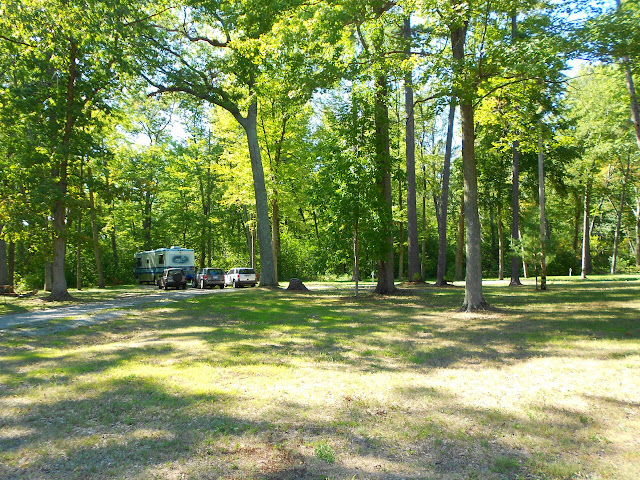 There was only one other camper here, a small popup down on site number one, quite a distance away from us.   Steve later was able to join us after five extra hours at the other park.  Traffic was at a standstill a few times for him on the way up, the same route we took.  Glad we didn't wait for him, or else we would have been sitting there all that while too in the heat.  He was able to finally pull off at an exit and whip around on back roads to get ahead of the holiday/construction traffic mess.

John treated us to some special "Gas Station Fish Fry" --- at our favorite little Mobil Station in Oconto.  The kids came out and left little Chelsea and Clayton by us for a while...  and then we later kept Chelsea overnight.

After helping mix up pancakes in the morning, little Chelsea shared them with John before he headed out.

I didn't get a shot of John's rig when it was parked next to us in the campground, but here it is as he pulls out and heads on his way towards Minnesota.   Safe travels, John! 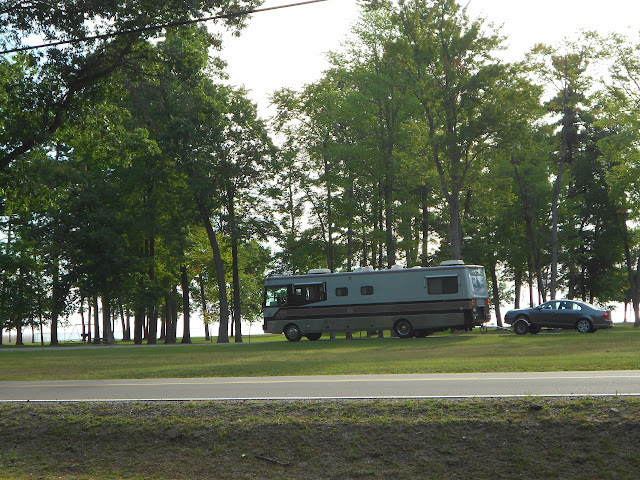 .
Posted by KarenInTheWoods at 1:03 PM