Steve and I went out hiking on Saturday.  This park has a bunch of trails, some in the woods, some in the meadows, and some along the craggy edges of the limestone cliffs.   The Niagara Escarpment runs through this park, so the shifting terrain has exposed layers of limestone.  Many years ago, there were limestone kilns situated along the shoreline, and the rock was baked into limestone powder.  This was used for making cement, plaster and other items.  Some of the old historic kilns are still located within the park boundaries.

The path we chose was called The Lime Kiln Trail.  It is a big loop that starts and ends right at the western edge of the campground.   The loop we chose was just about 2 miles long.  Steveio's knee is doing quite well, and he wanted to get out and explore each inch of the park as soon as possible. 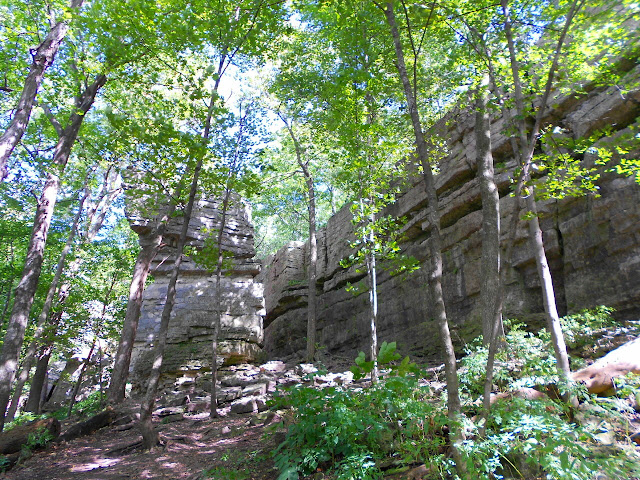 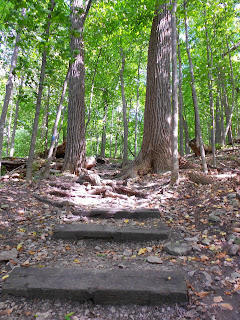 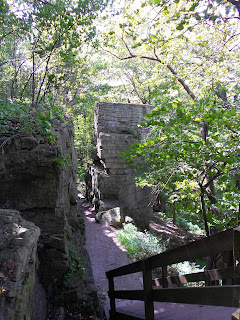 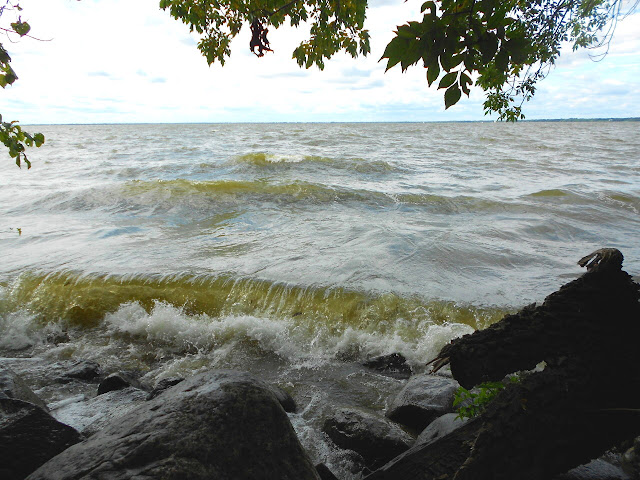 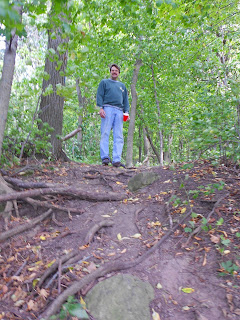 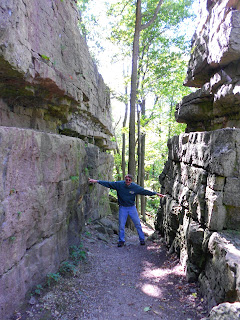 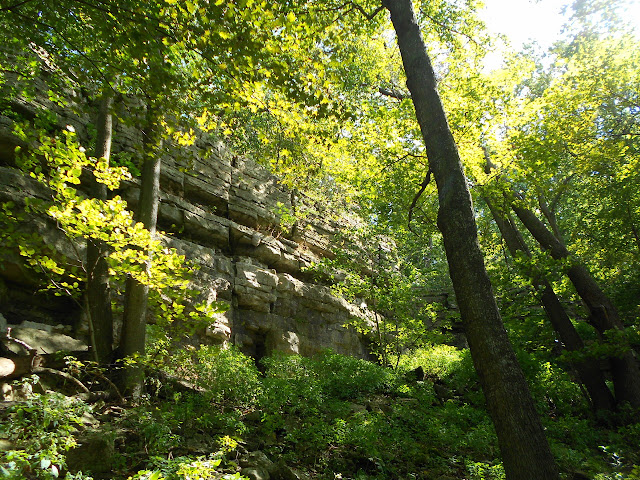 WE FOOLED AROUND TAKING A FEW PHOTOS.
THE DAY WAS LOVELY AND COOL WITH TEMPS IN THE 60'S
SO SWEATSHIRTS AND LONG PANTS WERE IN ORDER. 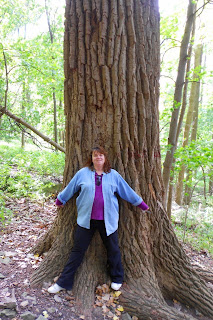 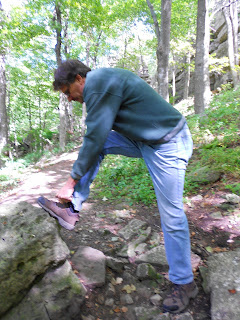 WE COULD FEEL A HINT OF AUTUMN IN THE AIR
AS WE WOUND ALONG THE PATHS IN THE WOODS. 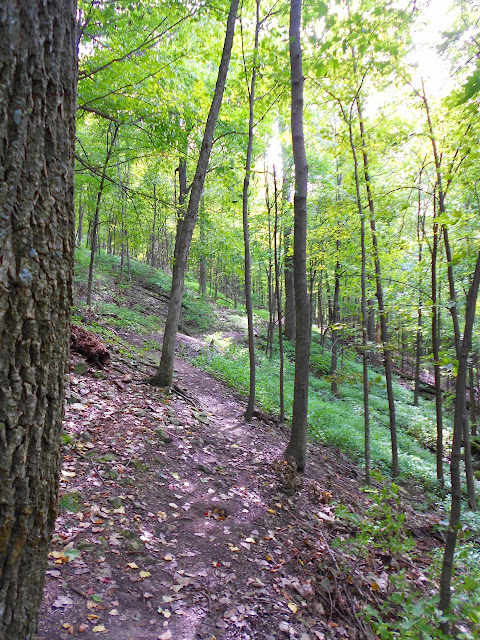 As we neared the campground up by the cliffs again, we saw a young girl, about 8-10 years old, dangerously close to the edge of a dropoff!   She was less than a foot from the edge on a narrow tall ledge of loose limestone, looking OVER the edge!  I told her to "get back away from the edge"   and "do your parents know you are out here?"  Behind her over on the other side of the tall spire of rock were her sister and her mother!   Her mother remarked something to the effect of "Oh that is fine, we are all right here"   I think they were trying to JUMP from the cliff on the left to the the spire on the right. DUH!    You CAN'T FIX STUPID! 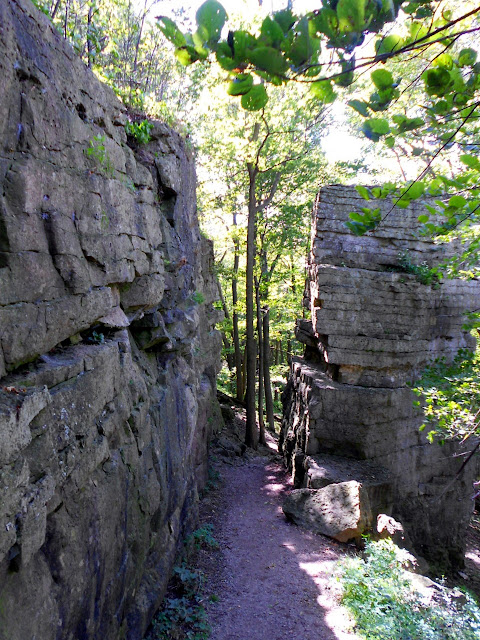 (of course, those are the types of parents who sue the state after their child dies,
citing the lack of warning signs, guard rails, or fenced off areas)


We walked back to the motorhome, enjoying the aroma of beef stew that I had simmering in the crock pot all day.  Ohhhh it smelled so good!   This is after we scooped out two bowls. 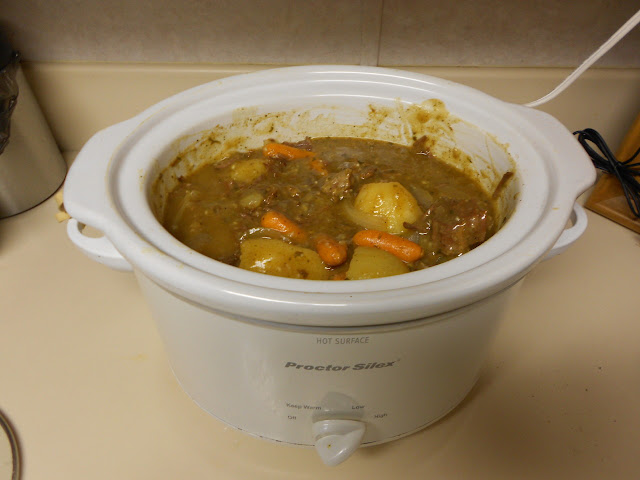 We finished up with a lazy evening in front of the TV, while I cranked socks and Steve played "Hearts" on the computer.  It was raining outside and the drizzle of drops on the roof top of the motorhome was soothing.  I felt bad for the tenters who got all set up for the weekend and just had their campfires going and enjoying their camping experience before the rains started.   Sigh.

Sunday morning is now all sunny and bright----  I baked up some Betty Crocker Streusel Muffin Mix (previously, our friend Paula made them for us, so I had to buy a box)   and sipping coffee here as I write the blog.  Today is a Packer Game Day---  FIRST game of the season!  So I guess we are not going to stray too far from the tv today.   GO PACK GO!


Posted by KarenInTheWoods at 8:23 AM