Snitcher and the TREE

I fear that my blogs are going to become boring now that camping season is over.  I am thinking I will start taking one previously made motorhome modification at a time to talk about, sprinkle in a bit of the fiber arts and grandkids, and try to make it through the winter doldrums----  and keep you entertained?

First off... for those of you who get my emails or facebook posts, you already know about this, but for my blog readers, I HAVE to tell you this story:

The other day after dinner, I could hear Steve in the kitchen sputtering and choking, and then laughing!   I asked him twice what he was laughing about, but he was not going to answer me because he was alternating between the chuckles and making strange faces with his tongue sticking out of his mouth!

OMG-----  when I found out what he did, I was laughing soooooo hard too!

Seems he managed to snitch what he thought was a piece of white sponge candy, when, in fact, he had snitched a tablet of dishwasher soap and popped it in his mouth!!!!!!   Yes, I am NOT kidding, that is exactly what he did!     See the white square on the top of this photo? (can't get the photo to rotate) 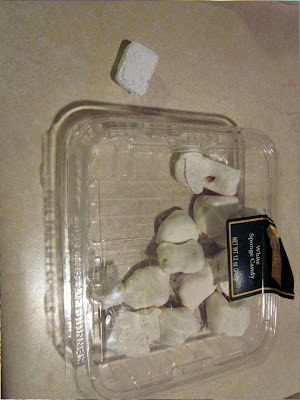 Why would we leave a tablet of unwrapped dishwasher soap on the counter, you ask?   We wait till the dishwasher has started the washing cycle before popping open the door to drop in a soap tablet-  otherwise with this dumb bargain brand it won't dissolve properly when set in the little door compartment.  So it was sitting there on the countertop, right next to the sponge candy, when he was messing around in the kitchen.  The worst part is...  it's HIS FAULT!!!   Because HE was the one who opened the wrapper on the soap tablet and put the tablet there in the first place!!!!!!
To help him out,
I  have now placed a few well-meaning Post It notes
to make sure he doesn't do it again! 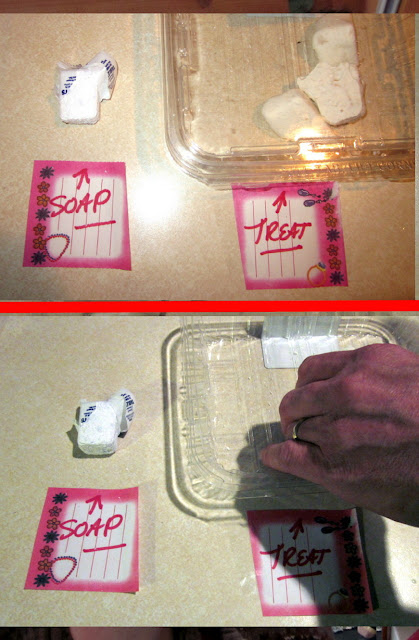 Once this pack of bargain dishwasher soap is gone,
we are going back to the Cascade toss in tablets that worked much better than these.
On Friday, we went to cut our Christmas tree over at the Dicks U Dig It nursery.  He has a whole slew of Blue Spruce trees that have grown scraggly and rangy and out of shape to be used for landscaping, so he lets people go out in his woods and cut them down.  $10 a tree, any size or shape. 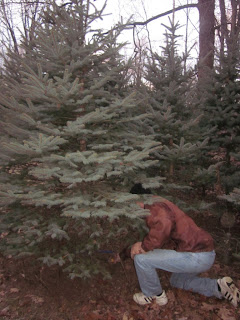 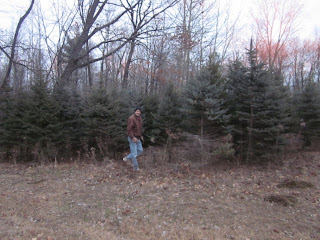 No snow right now, so we drove the car (last year we took the 4x4 Tracker) ....  Steve cut it down, we stuffed it in the car with a half of the back seat laid down it was able to wedge in just enough to keep it from falling out.  But I had to sit in the other back seat and hold the end of the trunk as low as possible to keep the tip of the tree from dragging on the road.  It wasn't far to get home, so we didn't really need to tie it up.  Good 'Nuff he said. 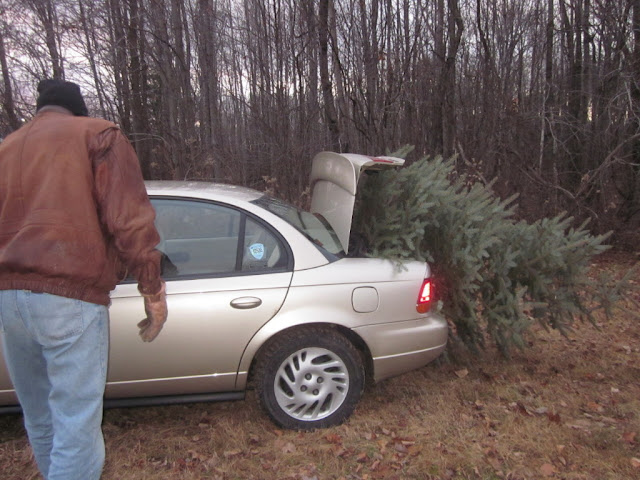 We listened to Christmas Carols on the radio as we drove home, and a few snow flakes were floating down, lazily making it a picture postcard tree-getting day!

Annnnnd the tree is UP! 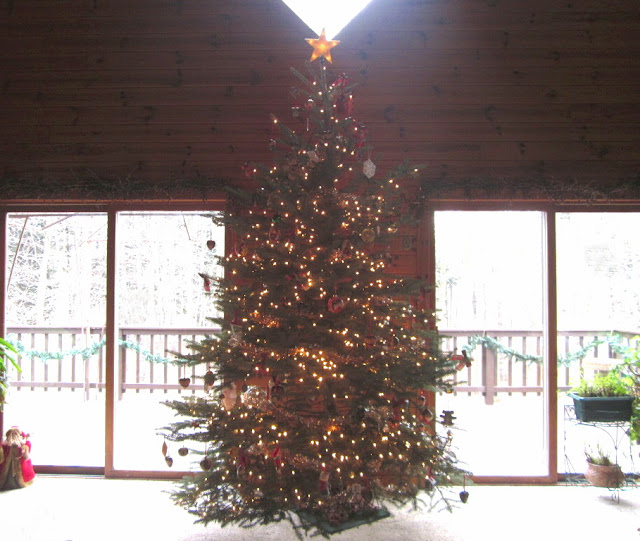 It's about a ten footer.  Just reaching the bottom corner of the diamond window.  Some years, when the kids were home, we would get them to touch tippy top of the cathedral ceiling 18 feet tall!

The doggers are getting excited about Christmas too, can't you tell? 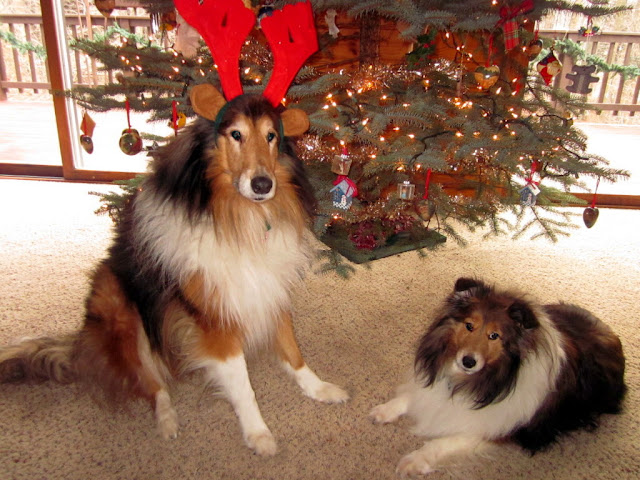 They don their musical flashing light antlers every year and entertain us with their sour puss expressions... LOL 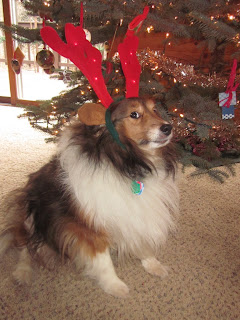 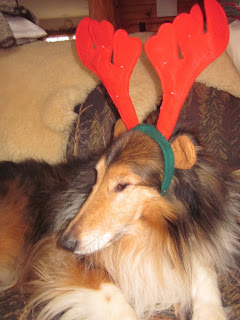 I have been scurrying the last few weeks filling customer orders, and shipping and packing and making my lists, checking them twice.  My customers have been very good to me!   I am on my last custom order of 7 pairs for Vinny, but if someone still wants to order socks that are in my inventory, I can ship them out Priority Mail to get there by Christmas!   This year the socks are flying out of my Estore, but I took a break to work on weaving some dishtowels in the early morning light.  This is my best time to weave, and I get more accomplished in the early morning.  Even in my jammies! 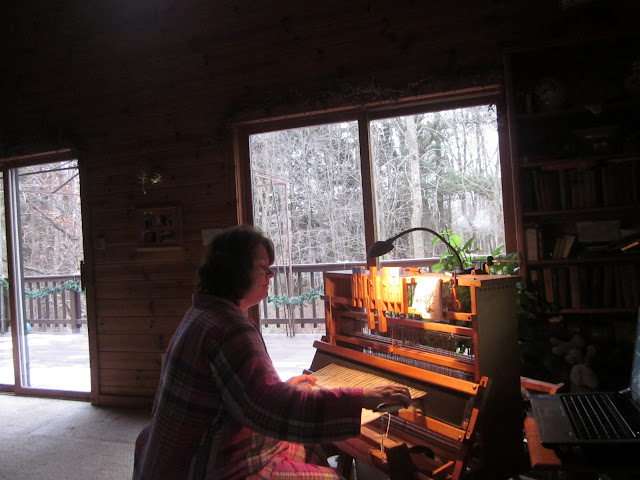 I am at the end of of what I was thinking about writing, and a nap might be calling my name.
Steve lit a fire in the fireplace, and we are going to relax and take it easy this evening. 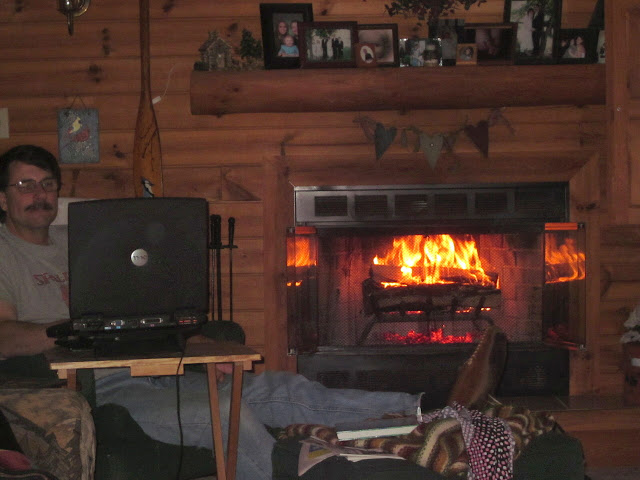 Posted by KarenInTheWoods at 3:18 PM