Once a month during the winter, we try to select a day when the roads are dry and free of snow, ice or slushy road salt.   We fire up the rig, drive it about 40-50 miles to get it good and warmed up, and also exercise the generator under load.  We have anti-gel additive in the diesel fuel for the rig, and it fires right up after clicking on and off the pre-heater three times.  Although it was only about 20 degrees, it roared right up, just like when we have started it at 10 below.  What a great kitty Cat engine!!! purrrrrrrrrr

As for the generator, it's a propane fueled onboard Onan 6300 watt.  It needs to be exercised too, or else the parts corrode and the electrical windings inside on the rotor go to heck.  We never used it enough in the past once we became solared up, and paid the price of having to have the rotor rebuilt because of not enough use.  (Steve shipped the rotor to SAM BORCK - 11392 CTY RD 5 - DELTA, OH 43515 - 419- 466-0485)   We are now more cautious about using it more often, at least monthly, to keep it in tip top shape.


Sooooo  since it was fired up, we hopped in, along with the doggers and a basket of supplies.  We drove up to North Bayshore county park and settled in the parking lot over near the boat launches.  The campground section of the park is closed, of course.  We have come here other times in the winter for exercising the rig, and get all cozy comfy, crank up the antenna, and watch the Packer Game! 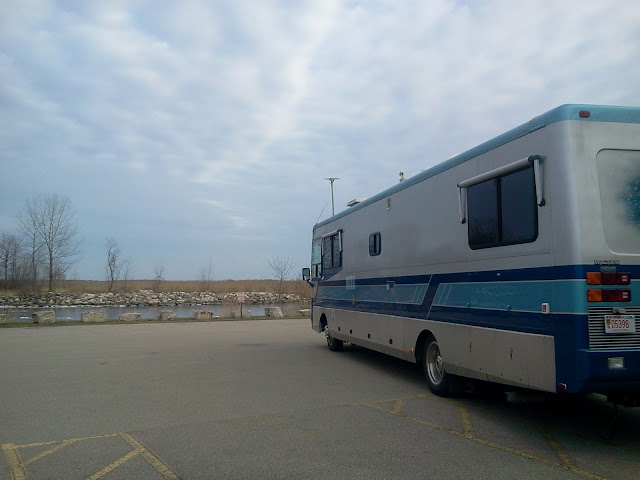 We have a great view out the windshield of the newly frozen over harbor waters, and then to the right is the open water of the bay where it flows into Lake Michigan. Brrrrr it was windy and there were whitecaps on the open water. 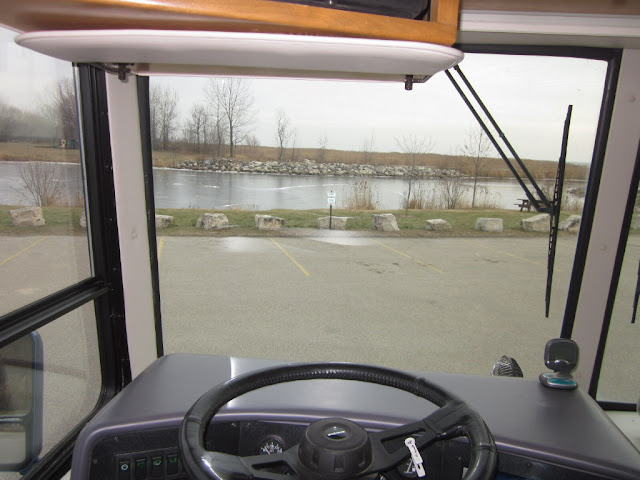 With the Olympian Wave 8 heater going on high, and the generator running, we also turned on the electric space heater too for a while to take the chill out of the furniture and carpeting.  Before we knew it, it was so warm we had to turn it down.  Ahhhhhh  comfort!    I was closing toes on some knit socks, and working on addressing the Christmas cards to get out in the mail this week.  Steve was enjoying his salsa and chips, and just one beer (because he was driving). 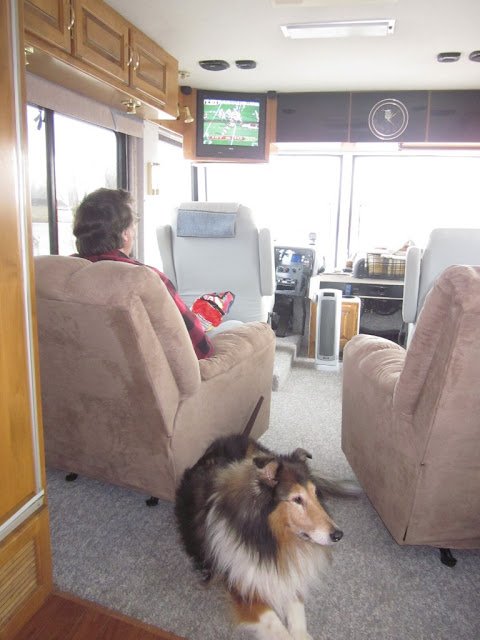 I brought along seafood stirfry and rice for our lunch at halftime, and the dogs were sprawled out in relaxation during the game, but we brought them out for a look-see-sniff around at halftime too.  They think they are *camping* so they are happy, as are we! 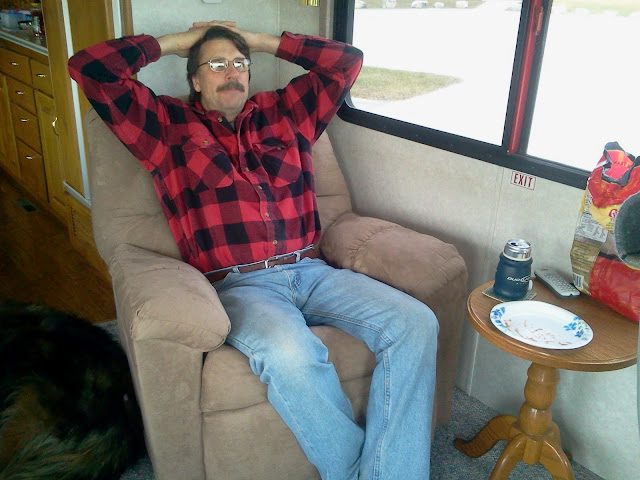 While we had the generator running, I started up the microwave to heat up some water for a treat.  Yummmm Tom N Jerry! 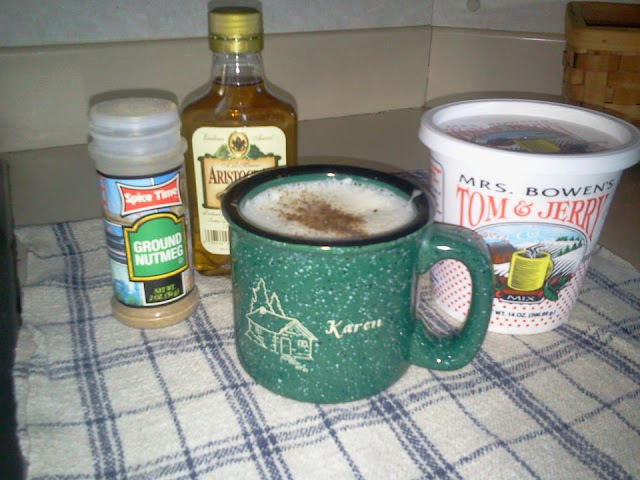 We buy containers of Mrs. Bowens Tom N Jerry batter in the freezer dept. at most any local grocery store this time of year.  Heat up a mug of water about 3/4 full in the microwave, then add a few big dollops of the thick gooey batter (it's like a frozen eggnog type mixture that doesn't freeze hard) and stir in the batter til it disolves into a frothy foamy hot drink....    then add in a glug or two of brandy or whiskey or rum, shake some nutmeg on top....  enjoy!  I only add enough alcohol for flavor, not enough to get us drunk!  LOL

All of our water lines are winterized, so we bring along a jug of water for the dogs to drink and that is what I also used for the Tom N Jerry in my cup.  If we need to use the bathroom while on our exercise trips, we bring along a jug of RV antifreeze and use that to flush the toilet instead of the normal water that runs into the bowl.  We already have the antifreeze in both the black and grey holding tanks and even some down as far as the valve closures and end cap, to prevent any cracking of frozen moisture that might be in those areas from the last time dumping.


Some nuts came along in the afternoon, backing up down the boat launch.  At first we thought they wee going to drive onto the ice!   But instead, they unloaded their truck at the edge of the ice, and set up fishing buckets and drilled holes in the very thin only 2" thick ice.  I personally think that is wayyy too thin yet this time of year.  We could see open water just a little ways further out where the little water way opens up into the bay.  Later into January and February it gets thick enough that even trucks drive in and out from this little harbor out onto the waters of The Green Bay and Lake Michigan.  But this is wayyy too early to be out on the ice. 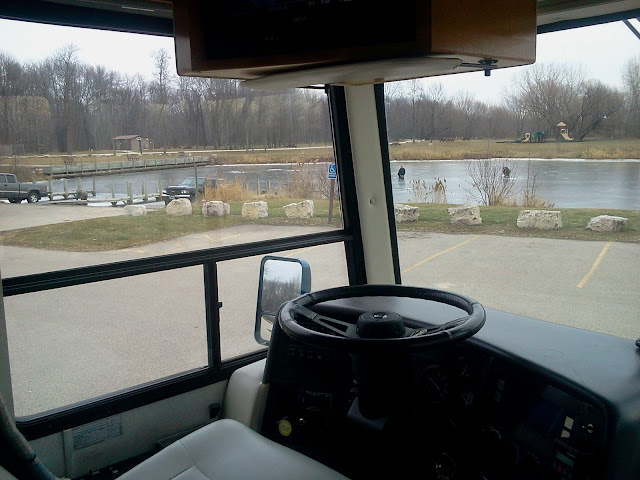 A few people drove into the park, circling around the motorhome in the lot and back out again.  Just locals being nosy perhaps?   Wanting to see the crazy people trying to camp in the parking lot at the boat launch?

Sadly, the game was a bust and the Packers lost, ruining their 13-0 winning streak.  But being true Packer fans, we shake it off and look forward to the next game.  They are in the playoffs of course, and if there has to be a loss, have it now before the playoffs begin, right?

About 4 pm the sun was starting to go down, and it was time to fire up the rig and head it on home.  It feels soooo good to be riding down the highway, and we wish we could just keep that nose pointed south and go go go.   Instead, we drove back home, backed it in the driveway and packed up our gear to take back in the house again.  The dogs were happy, they jumped out the door, adventure complete!

Oh, I forgot to put on Saturday's blog about what I did during the week.... 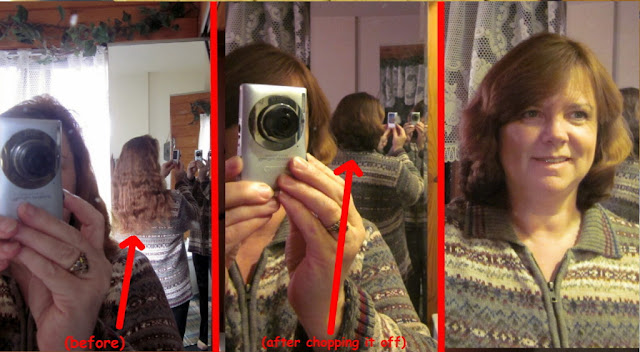 Yup, chopped it off! 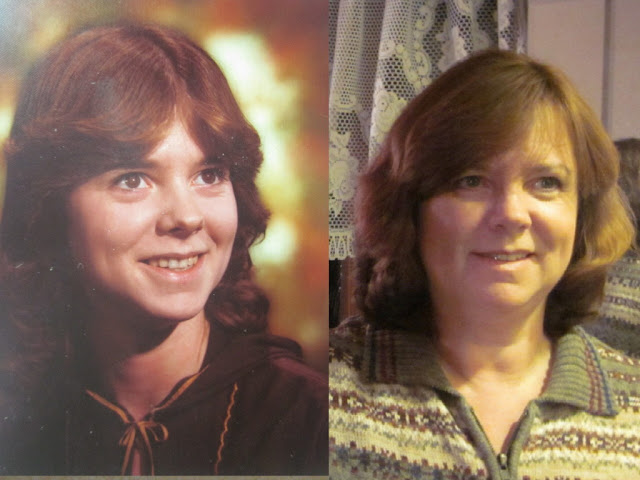