Our holidays were delightful, and the weather was NOT frightful... we did get a little snow to make it a White Christmas.  It seems all the states south and west of us got a lot of snow, and we got missed?


As you can see in the pic below, the river far behind the trees in our woods is still open water.  It had froze over a little bit in November, but has since opened back up and was glistening in the cold sunlight on Christmas Morning.  We often look out on this view while sipping coffee in the early morning.  Sometimes we see wild turkeys or a deer ...  it's a very peaceful setting. 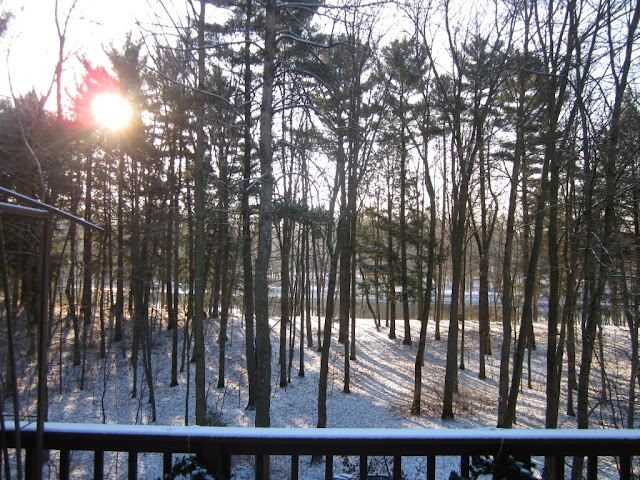 Back to the holidays-----   Early Christmas morning, we got up and exchanged gifts between us... Steve opened his presents from me.  He loved his new set of larger Craftsman wrenches he was lusting after... and I will write more in next blog about the Vortex Fan I got him for the motorhome.  I will do a blog post on his installation process later.

Steve kinda pooped out on a gift for me, evidently not a lot of planning or forethought.  It was just a quickie grab of a BRIGHT ORANGE UWGB sweatshirt he bought from the campus bookstore at the last minute on Thursday before leaving work.  Ummm? okay....  kinda something at 20 year old skater would wear with wrinkly worn graphics made to appear aged and deteriorated.  Not something I would ever wear.  And ORANGE?  What was he thinking????   Guess it musta been on sale because UWGB sports team colors are green and white, eh?

I guess that's okay, because now when I find something I really want, I will just tell him that THIS is his Christmas present that he owes me!!!  LOL  There is a weaving class tuition due in January that I go to every year in May, so I think that might suffice to replace his poor planning. LOL

Even the doggers got a good present, and ripped it open gleefully...  a big big bag of doggie treats!  They each got two before we put the rest away into their treat canister. 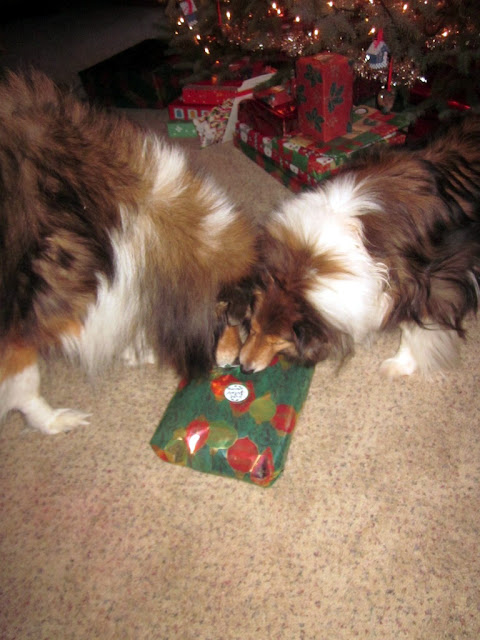 Then I set to working on creating four dozen little MICE!!!  Someone sent me this idea on Facebook.  I didn't want to make them too far in advance because I didn't know if the chocolate would "bloom" and get that whitish powdery coating if made too far in advance.   Steve was put to the task of unwrapping the Hershey Kisses (he popped a few in his mouth too)  while I drained and patted dry the maraschino cherries. (with stems)   I melted chocolate chips with a tiny bit of butter in a pyrex measuring cup in the microwave. 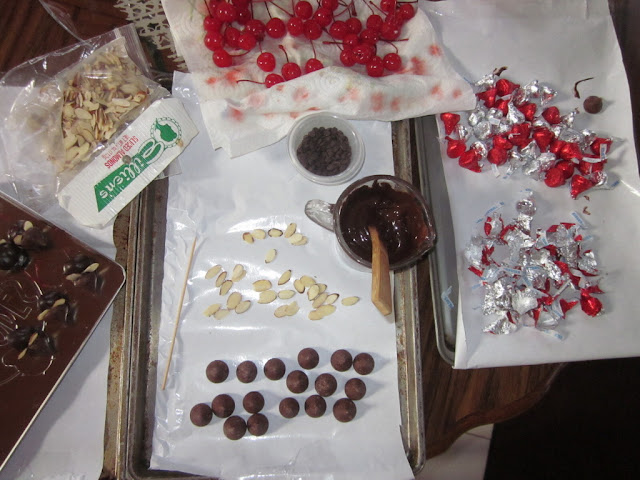 I dipped in each cherry by the stem and laid on it's side on wax paper.  I then pushed the bottom side of a Hershey Kiss to the front side of the cherry, and adding two matching slivers of almonds for the ears into the soft chocolate between the body and the head.  Once they firmed up, I added two miniature chocolate chips for eyes each dipped with a tip of melted chocolate as glue.  How adorable!!!! 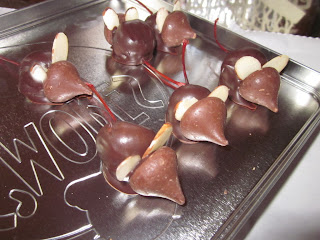 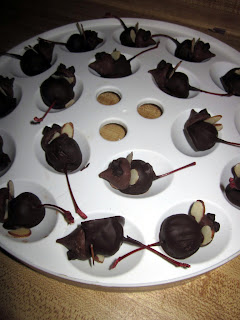 As the mice firmed up on trays in the fridge, we got ready for our holiday trekking over the river and through the woods.  "Grandmother's House" was really a destination to Uncle Pete's house, and Steve's folks and some of his other siblings were meeting us there.  Also, our son Dan and his wife Heather, with little Allegra were able to trek on down there too.  Both our daughter's Erin and Heather had other family obligations with their spouses' families during the day and weren't able to make it down to Pete's, but we were all meeting up later when them at Erin's house for the evening.
The sun was out and the roads were dry, so it was good travelling down to the Fox Valley.  Poor Pete was feeling under the weather, but held his own as he prepared a nice buffet of delicious treats for the family gathering.  My little mice were a hit too.  LOL
Snapped this shot after dinner of Steve's brother Mark, his mom Mary Ann and his sister Wendy, both his older siblings.  In the background are Mark's wife, Shirley and his younger brother Pete. 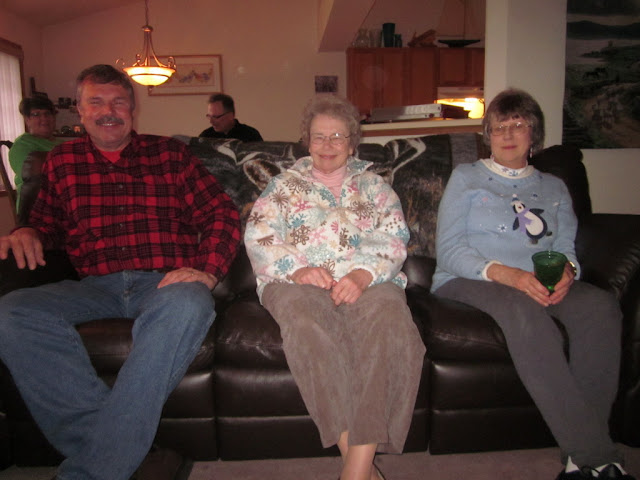 We had a nice visit and little Allegra entertained us all with her antics, being the Life of the Party.   At one point she was collecting all the ladies purses and hauling them around on her shoulders--- wonder how much she pilfered outta the wallets to go shopping with?  She did get fun treats of using Great Aunt Shirley's chapstick and then some TicTac mints! haha 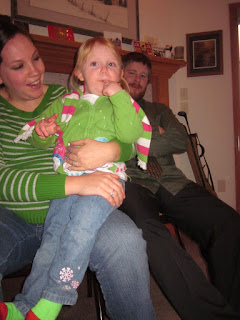 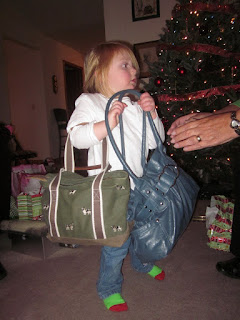 We tried to make all of our gift giving this year either homemade or at least bought locally.   I baked up four loaves of bread, added four jars of homemade blackberry jam from berries we picked last summer, put them in baskets with a handwoven towel in each one and wrapped them up for all of Steve's family. 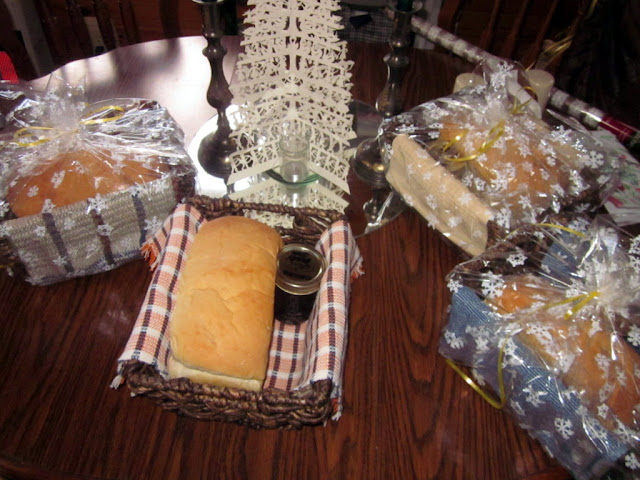 After dinner and spending some time with Steve's family, we needed to hop into the car and head back to Oconto, stopping off at home first to let out the dogs and load up the gifts we had prepared for our children and grandchildren.  Here is a preview:
For our kids, all being Packer Fans, I knit them all a pair of Packers socks!   Even the wee grandtots got a pair, and we were giving them in time for everyone to wear during the Sunday night trouncing of the Bears! (Packers won 35-21) 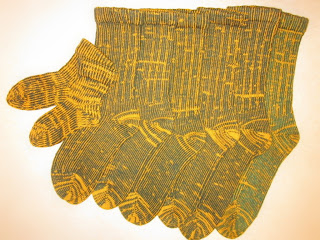 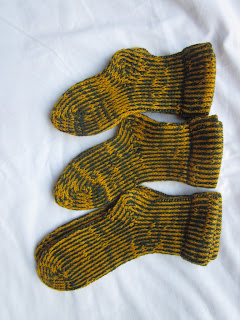 Our grown kids, as couples, all got a card with a photo on front of them during their dating days... it said:

Remember when you were dating?
Remember romantic dinners out?
Remember cuddling up at a movie?
Remember your lives before children?
Remember ???

(inside)
Please take the time to
have a romantic night out
on us!!!!
Rules:
Get dressed up
Guys open the car door
Gals say “thank you”
No talking about bills or work
Say something nice about each other
Take time to laugh at the dumb jokes
Order something you don’t usually eat
No talking about your children  —–
Remember, you are dating !!!
Includes an overnight of free babysitting
by Granmuddah and Granfaddah Pfun
Pasted inside the card were movie passes, and dinner gift certificates to a nice steak house located near the movie theater.  The steak house is owned by local people and even their meat is locally grown for their steaks. Although the movie theater is a chain, it's the only place to see a movie.

And the last gift I had prepared for the kids were these small wooden plaques.  Many years ago, my friend Connie had me paint up some plaques like this to give to her grown married children.  It can be set on a dresser or endtable, tucked in a drawer they both might use daily, like when reaching for a hair brush or toothpaste, or anywhere they might note it daily and read it's words.  She wanted to convey the idea that marriages don't "just happen"  they are a process and stages and things to work through to attain a happy marriage over the years.  I wanted to pass on that wisdom to our grown children too and cherish the thought that they can feel this in their hearts too. 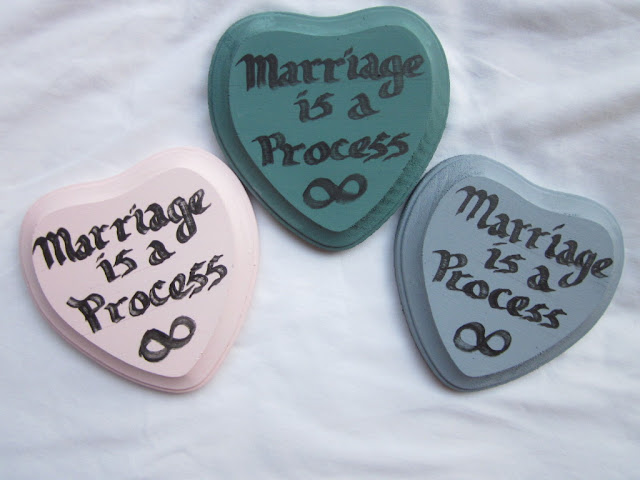 We grabbed our wrapped up homemade presents, and then a pile of toys and jammies for the grandtots  (hard to find much of anything made in the USA in the way of toys)   and we headed on over to Erin and Mark's house for the rest of the holiday celebrations.

That part of the day will be on my next blog post!