Oh my,  it's been just NUTs around here this week, so I didn't have any time it seems to tend to my blogger friends.  I am sooo sorry!  So here is a quadruple blog to please ALL my blog readers... it's got something Motorhome-ish, Geek Teck-ish, Fiberish, and Grandchildish---


So... first on deck is Motorhome-ish.    Our motorhome originally came with two wider kitchen chairs with arms and two nice folding chairs.    We long ago got rid of the wider chairs with the arms to our son Dan, and we had been using the folding chairs.  They were okay and they matched fine. They are meant to fold and stow away underneath the couch when not in use.   But we took out the couches a while back. 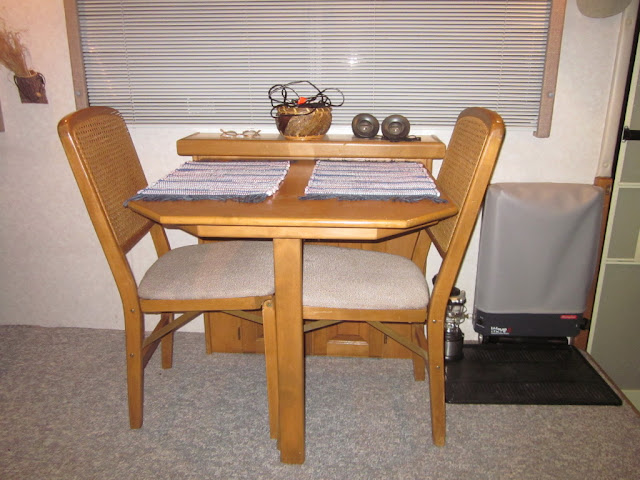 Steve works at the University in Green Bay.  From time to time they have auctions of items and he spotted two chairs. He was thinking they were nice and we should get them.  He put in a bid for $10 and won them!

They are a little shorter and a little wider, and the woodwork matches close enough to suit us.... 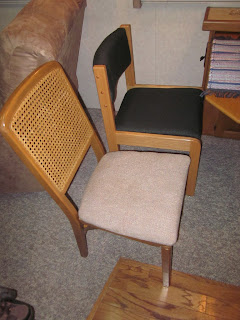 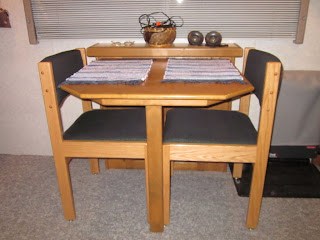 In case the table looks small to you, it's because it's in it's narrowest form.  It also pulls out and has two more leaves to put into the space to make it long enough for six to sit around.  We never do that, as then it's time to move out to the picnic table!  LOL   So we really don't need the extra chairs with no couch to stow them under anyhow. 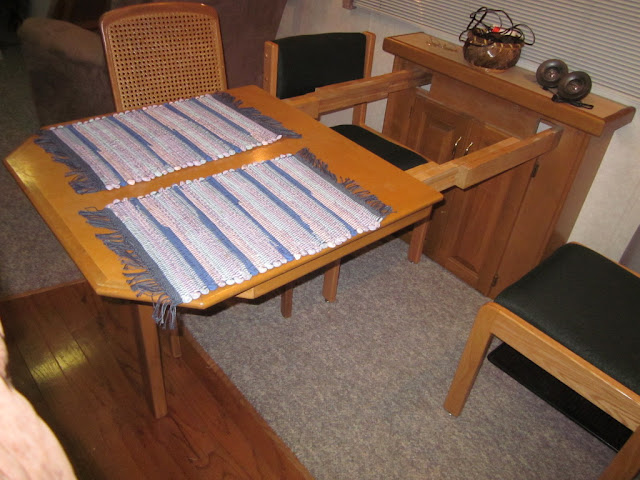 I listed the two original folding chairs for sale onto the new Safari list I am on ....
http://autos.groups.yahoo.com/group/OnSafari_Coaches    and they were snapped up by fellow Rver John down in AZ.  Quick as a wink, I packed them up and shipped them out to him.   It's a great list where we can be friendly and share ideas, repairs, and other fun stuff... not just particular to Safari coaches, anyone is welcome to join!
Since we took out both of the couches in the past few years, and added 2 recliners that are neutral beige/tan color, we can now kinda change the overall color of our interior decor.  I am a *Hunter Green* type of person, so these new chairs will really work out well!   They are already hunter green!   Next I am thinking of taking down the valances and lambrequins (the wooden things on each side of the windows that help hold the miniblinds secure)   and cover the blue sections of those with strips of hunter green fabric.   Add a few of my green rugs, a few green placemats, and voila... our decor is changed!  Easy Peasy!


Next up....  Geeky Electonic stuff!   Since we got our Galaxy tablet last summer, we use it as a router or hub to bring in our Verizon internet signal and send it out to our laptops.  It's like a little wifi bubble of our own in the house or wherever we take the tablet and laptops (like in the motorhome)  Previously we had an AT&T aircard and Cradlepoint router to provide us with internet.   We had to drop AT&T because of roaming issues, and are now getting internet from Verizon.   This Galaxy tablet does the same thing as the Cradlepoint router did, plus a whole lot more.  We pay $60 a month for internet service to Verizon to use this device with a 2 year contract. 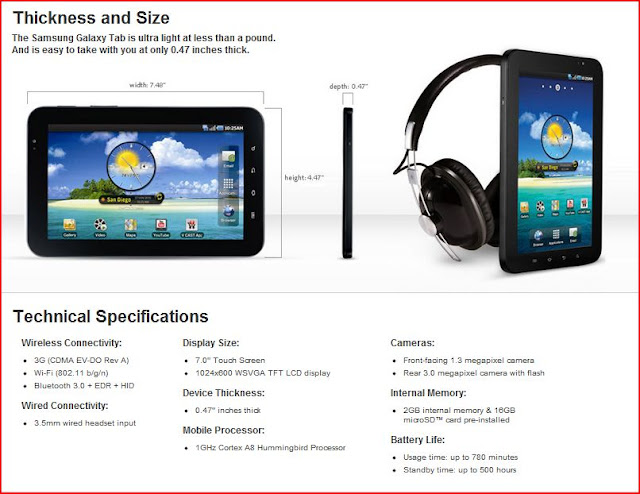 My newer Dell laptop computer hooks up fine to it, but Steve's older one would *see* the signal but could never hook up right.  We got Steve's computer from Dee and Jim (fellow RVer friends of ours from blog http://tumbleweed-jimdee.blogspot.com/  )  and it came with two network cards, which worked fine with the old setup with the Cradlepoint router...  but neither card would let us hook his laptop up propertly to the new Galaxy tablet.  Arggghhh!   In the meantime, Steveio was using the tablet to scour Craigslist and Ebay, the two most favorite past times of his.

But the combination of having to use his big fat fingers, and holding it up in the air at an angle all the time to see the screen, he was not as happy, and he could not see big pictures of details and information.

(and a lot of swearing when he would accidentally touch things on the screen
because of his fat finger and it would jump to new screens) .....
It was that or else let him on MY computer, and if any of you couples share a computer, you know how well THAT works out, hey?   Sooooooo I decided it was time to either figure out this new network technology or get rid of the laptop if it was obsolete.

Time to learn... so I started googling ... found out there are 3 types of network signals.  G, B and N.  Seems the two pcamia network cards Steve already had were "G" and "B".   They worked fine with the older Cradlepoint router we had.  But the new Galaxy tablet is now an "N" type newer signal....     So with a hop on down to the local Radio Shack, and sure enough, they have an N network adapter and for a mere $29.99 my Steveio is one happy computing man!

(anyone need 2 older "G" or "B" pcamia network cards?)
Right now as I type this, he is over in his easy chair, on his laptop, happy as a clam.  If clams are happy, I don't know, but that is a saying I guess.

He is home today because he had a dentist cleaning at 9am, and had a little discomfort with the dentist being upset about having our dental work done in Mexico last spring.  I was in on Monday for my cleaning  with the same dentist and he was displeased to have missed out on about $8,000 worth of business from us.  Instead, we had things done by a well-recommended dentist in Los Algadones and only spent $900 instead of $8,000.

Blog post of visit to dentist in Los Algadones

I think our local dentist was a bit peeved to have TWO patients in one week telling him he lost out on more work at his inflated prices made him a grumpy guy I guess.  He keeps saying he will now have to "watch our teeth" ???   Then he tried rapping really HARD with the end of his metal tool on my two front porcelain caps, telling me they are "old" .... well, if you bang on em hard enough, they will break, whether they are "old" or "new"!!!   Trying to drum up new business?   And on Steve's teeth this morning he is warning about a possible cracked tooth that he will have to "watch" till our new coverage starts again in January -- and our new deductible too.  ACK!  Steve said we will hold off and get that one taken care of next time we are down south again. LOL

Ummmm next topic... fiberish!   I am cranking socks left and right for my valued customers and the big orders keep rolling in before the holidays, on top of new customers finding my socks and hats and rugs in my E stores.  Once they buy one pair, they love them so much they contact me to order more!

I have two stores on line:
http://kareninthewoods.etsy.com/
and
http://www.artfire.com/ext/shop/studio/kareninthewoods
So the socks keep a cranking and I am keeping very busy bundling them up to ship them out each day. 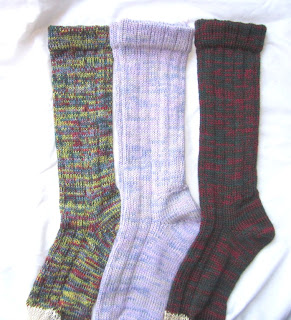 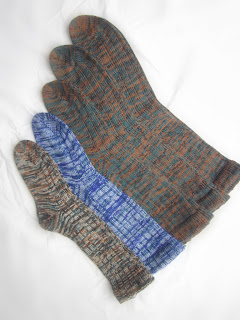 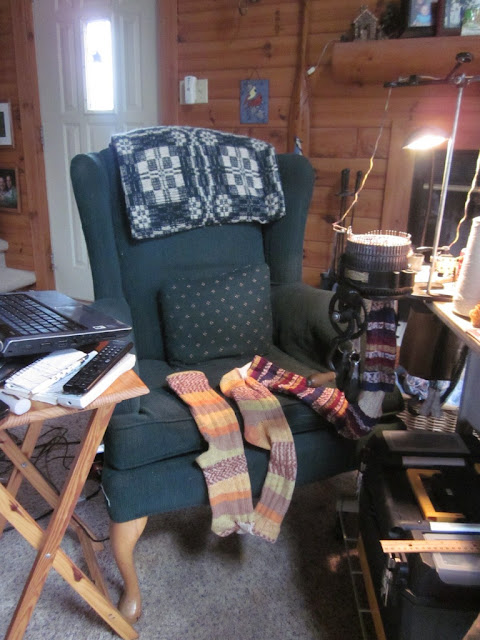 See how I keep the laptop nearby and check messages, emails, incoming orders and writing blogs when I take a break from cranking?   And you thought I just sat on the computer all day long... ha!

So that is what I am doing to keep busy as the temps drop and snows will be soon be piling up out the door.  This morning it was 8 degrees, and the river is starting to freeze over ...  Winter is here.  ICK!

Last Saturday was the birthday party for our little granddaughter Allegra!  She turned 2 years old and is into Minnie Mouse.... and had a wonderful party with all the grandparents, cousins and aunts and uncles there to enjoy the day.  Presents, cake, and laughter were the order of the day.... and I put a little one minute Utube video of her birthday song here:

What a delightful little lady... growing up sooo fast!  Spending time with her cousins Jameson and Chelsea.  Both girls convinced Granfaddah that it was time for a story, and he was all too happy to oblige! 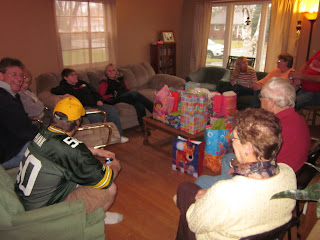 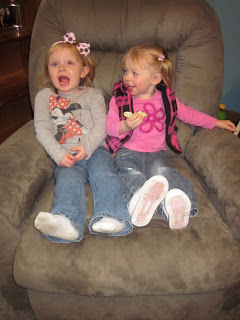 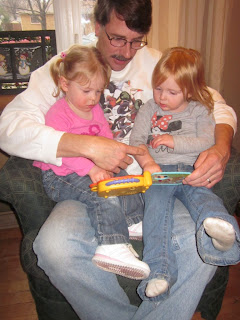 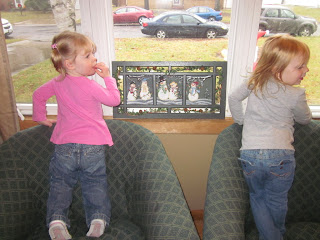 And this blog has now grown long enough to post,
I am putting a pot roast in the oven and going to get more cranking done.

Posted by KarenInTheWoods at 12:02 PM