Oh what a pleasant way to send out the old year.....
and bring in the new if I can keep my eyes open long enough?
One more hour... one more hour....
Little Allegra came to spend the night with us!   We decided that she needed to learn to crack open eggs, so we hauled out a box of brownie mix, and let her have a go at it.    She did very very good and cracked them both into the bowl, and didn't drop in a single bit of the shells! 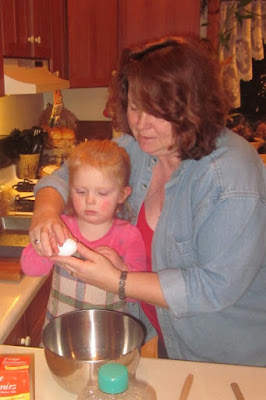 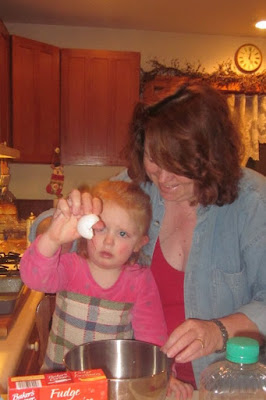 She was amazed at the gooey stuff on her fingers, and promptly wiped them on her towel/apron!  LOL


Next was the box of brownie mix.  We needed to do this baking thing fast, because the attention span of a two year old is pretty short.  No baking from scratch for these kiddos.   Opened the box and showed her the picture of what we were making, and let her shake in the powder into the bowl and cover up her eggs!  OH MY! WHAT HAPPENED TO HER EGGS?????   She was a bit upset when she could not see them anymore. 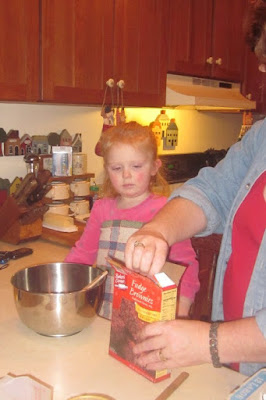 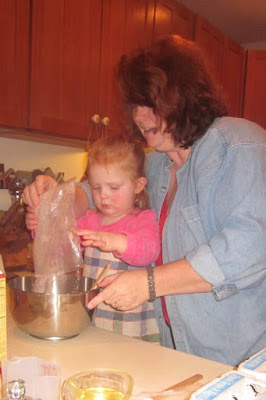 Now she got to dump in the pre-measured cups of water and oil.  Carefully I helped with the pouring so it all went IN the bowl.   She was still concerned about where her eggs went..... 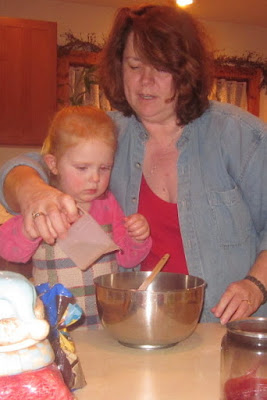 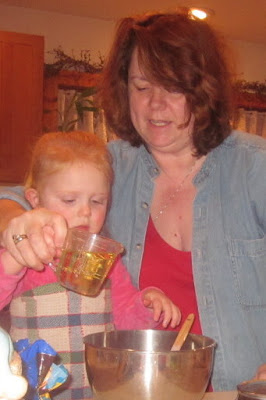 She carefully mixed round and round with her little red spoon... and soon found her eggs in the bottom!  We squished them all up and mixed them into the batter.   Soon it was ready to pour into the pan to bake, and she got the reward---- licking the spoon!!! 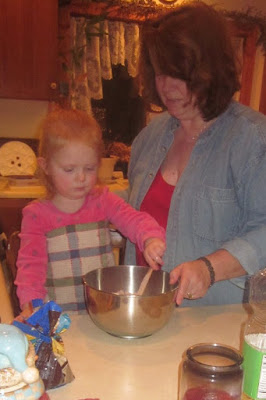 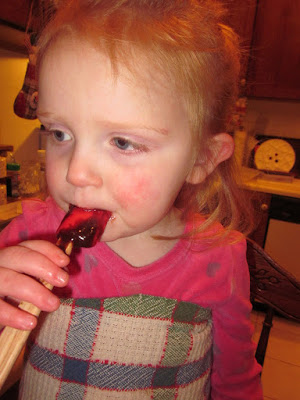 We make quite the team, dontcha think?
A couple of Regular Betty Crockers!!! 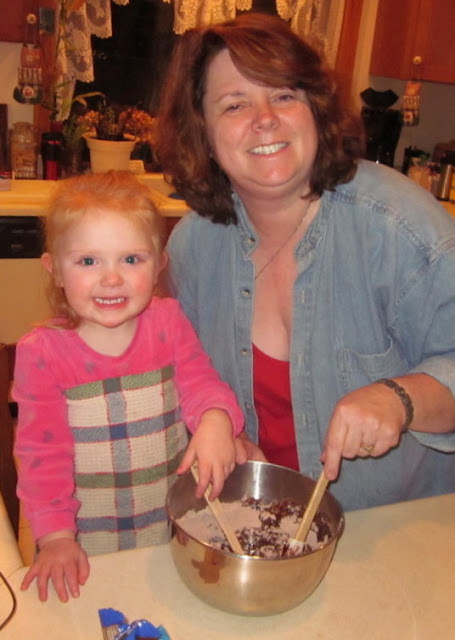 We had originally planned a playdate with the other two cousins for the evening, but they were petereing out as much as this little pumpkin.  By 7pm she was yawning, and during her bath she was trying to lay down and sleep in the tub!   By 8pm after her bath she was fast asleep.   We will do some playdate time in the morning in town with Chelsea and Jameson who is sleeping over there.

Poor Heather and Jesse had planned a night out on the town, but Heather is now suffering from a sinus infection and they are staying home.   She still let Erin take Jameson for the night so she and Jesse could curl up in front of the tv and watch an all night marathon of some zombie shows or something.  LOL

We will bring both grandtots down to Green Bay in the morning before the Packer game starts at noon.   The roads are going to be bad and the winds gusting as high as 50mph, so we will leave early, take backroads and go slow.  "Precious Cargo" on board ya know.

Well, it's 11:30 and my Steveio is konking out there on the couch, and I am about all in here too.


I think in the morning, we will eat chocolate brownies for breakfast to ring in the New Year!