Oh that Steveio is in heaven today....

He took a day off work as a vacation day, and it was well worth it.

We loaded up granddaughter, Wee Chelsea, into the car and headed out this morning.  First we drove west 95 miles to Wausau to King's Campers.  They had an extra powered windshield shade in their overstock inventory that someone didn't want, so we called them and said SAVE!   We saw the one Mel and Paula put in their Safari when they stopped here on Sunday, and they said there was ONE more there at King's Campers!  The price was right and it will be nice to have that instead of the crinkly wrinkly curtain to manually pull around the windshield each time we stop for the night.

We got that 8 foot long roller shade and put it in the Saturn, with half the back seat folded down and the shade all the way up between our seats.   We stretched our legs a bit walking around the sales lot, and Chelsea got to check out some motorhomes.   She wants her parents to buy one to go camping with us, she said so!   LOL   We like what we already have, so nothing was appealing to us.

Now for the next part of our journey.

We were picking up a 1995 Geo Tracker 4x4 to tow behind our motorhome.  In RV *slang* it's commonly called a TOAD.   Get it? a *towed* car?   yuck yuck guffaw!  These little Geo Trackers make great toads because they are lightweight, under 3,000 pounds and do not require a supplementary brake system.  This one had been towed by Wendy and Pat's parents, so it was all set up with the towing base plates and the required wiring for the brake and turn signal lights.  We already own a tow bar, that my brother was using.  So we will get that back before going on vacation in a few weeks.

So once we left Wausau, we drove north and west for 50 miles up to Antigo and checked out tires ahead of time, as we knew the Tracker needed some badly.   We had gone and test drove the Tracker last weekend and decided to buy it this week.

We compared and configured and went to Fleet Farm and Walmart.  Chelsea bug was smiling all the way and enjoying her day with us.  We grabbed a sub lunch in SubWay and Granfaddah fed the baby while I ordered  the subs.  He did a great job, and didn't get too much on her clothes and none on his!  The elderly Wal-mart Greeter on the other side of the window was watching him with glee on her face.   LOL

Now it was close to 1 pm, so we drove north another 25 miles to Pelican Lake to pick up the Tracker.  The seller, Wendy, and I, let Chelsea out on a blanket on the grass while Steveio and Pat conducted the final business.  This couple also found out they were going to be new grandparents soon, so Wendy was enjoying the baby-itis of the new visitor.  Business done, money and title exchanged and off we went again....   driving a bit slower as the tires showed some cracks and we wanted to make it the 25 miles back to Walmart without a problem.

We made it to Wal-mart for the new tires, without a blowout thank goodness!  We wandered the store for an hour while they did the tires, and also we had the oil changed, fluids all checked and new wiper blades installed.  Steve double-checked all their work, and the date codes on the tires were only 2 months old.

Our little traveler Chelsea was swiped away by her Mommy!   Erin was driving through Antigo on business from Rhinelander and Eagle River, so she was driving past the store we were in.   She was happy to see her munchkin who had already put on 190 miles already since breakfast.   We handed her off and became childless.

The Tracker ran just fine Steve said, so now I got to drive it, (I think he wanted all the fun first!)  We headed on homeward bound.  Steve followed in the Saturn.  I cranked the Kenwood stereo to some good 70's tunes.  I had forgotten to take along a couple CD's to test out the player portion of the stereo, but the station selection in the northwoods was okay....

I thoroughly enjoyed my drive home in the cute little thing, it drove well, tracked straight and handled nice, even if it wasn't power steering.  It was snappy, spiffy and sporty.  Has a nice tight clutch, good shifting and lots of pep. 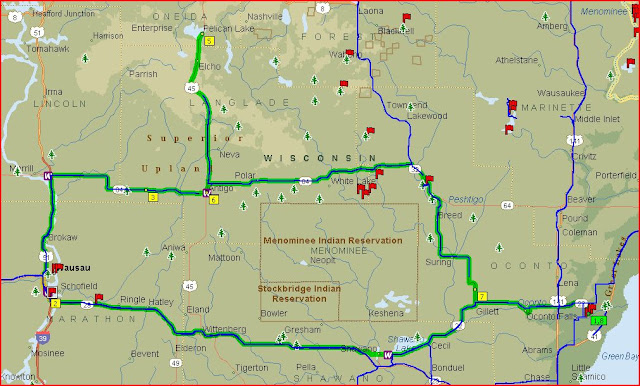 And here it is, at home, ready to be hooked up to our motorhome! 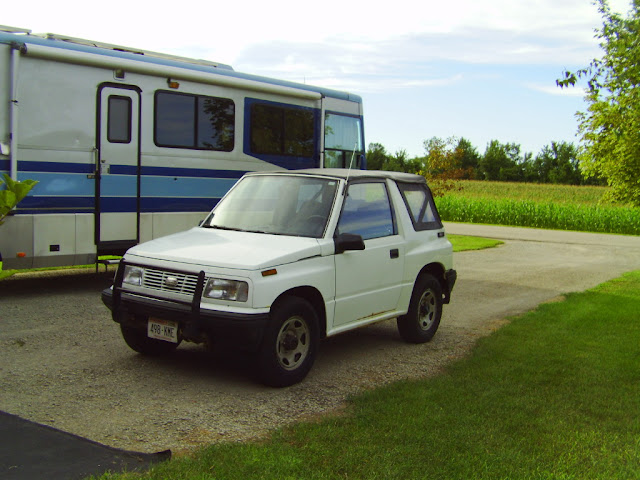 There is some rust on the lower edge of the doors, but the frame underneath is all good.  We might ask Lowell to do a bit of body work for us and then a paint job.  Thinking silver would match good with the motorhome?   The vinyl cover is good and no rips or tears, and the inside is in very nice condition.

But of course, Steveio had to vacuumn out the grass from the lookey-loo folks
who stopped to see it on the roadside at Wendy and Pat's cottage. 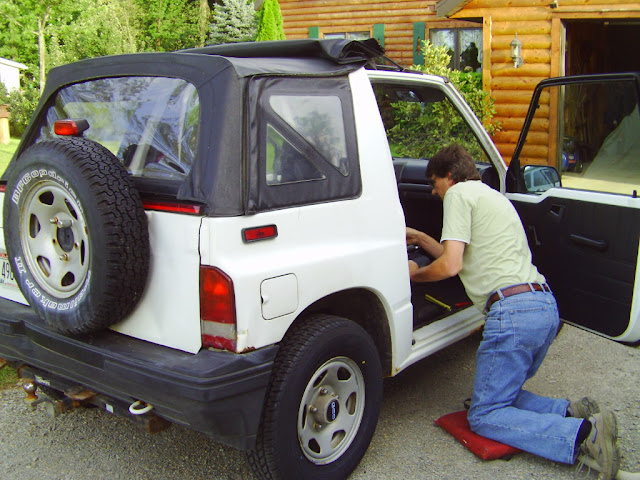 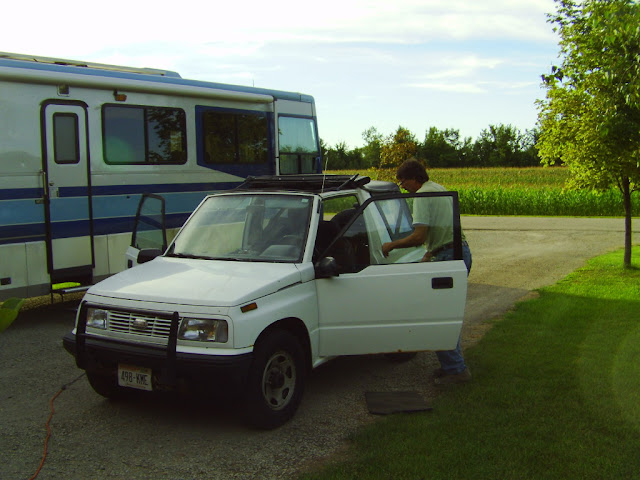 Soon he was done

and we flipped back the top portion of the sun roof.... 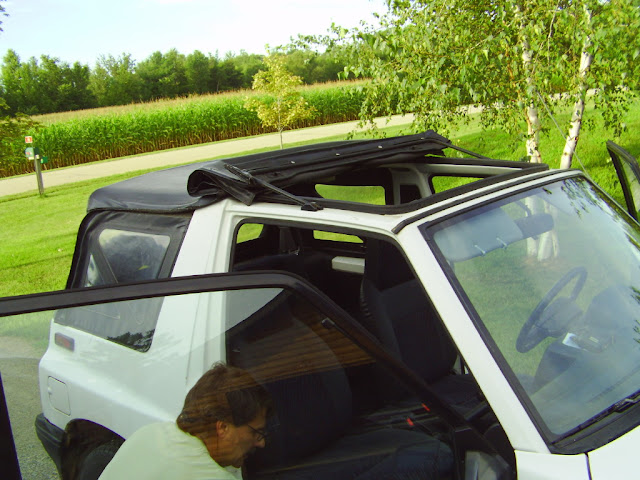 I covered the back seat with a blanket, and we loaded up the doggers.
It was time to go for a ride for ice cream! 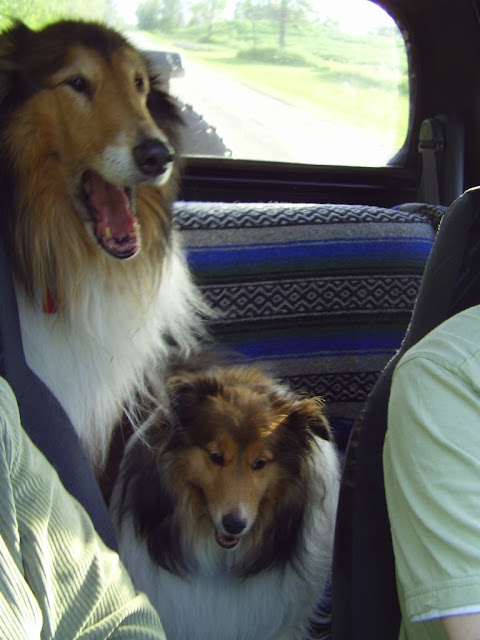 and someone was really having some fun!!! 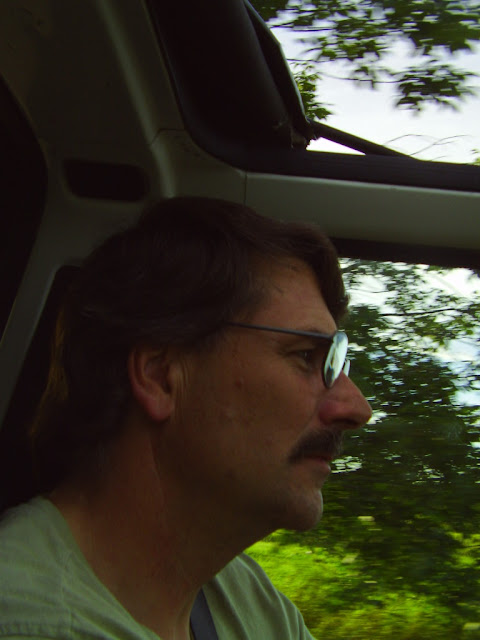 We saw three deer just down around the corner, and I managed to snap a pic of one 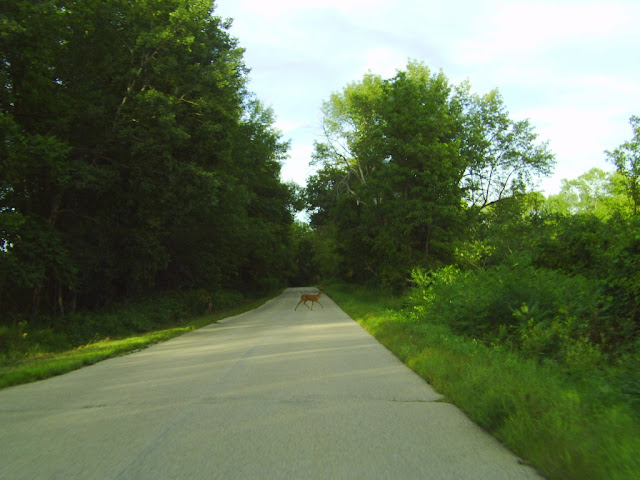 Here is a shot from our laps upwards, to see the sky out of the open sun roof... how fun! 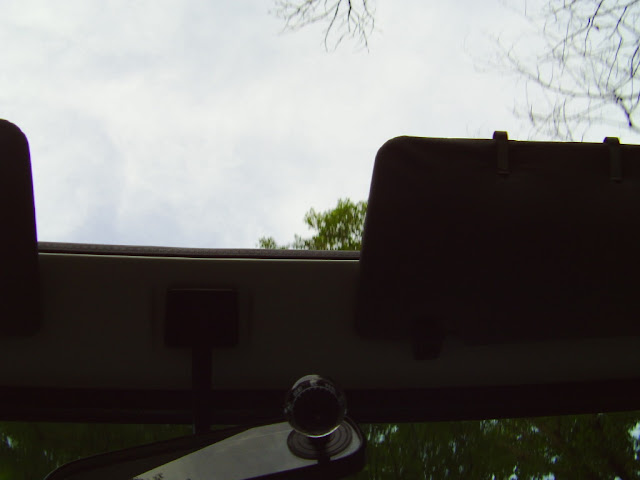 After stopping for ice cream, we cruised through the local campground.  We do that often, just to see who is camping or look at the rigs that pull in and out in the daily sites, or see the seasonals that are there too.

I guess we all voted, this is gonna be a fun little vehicle! 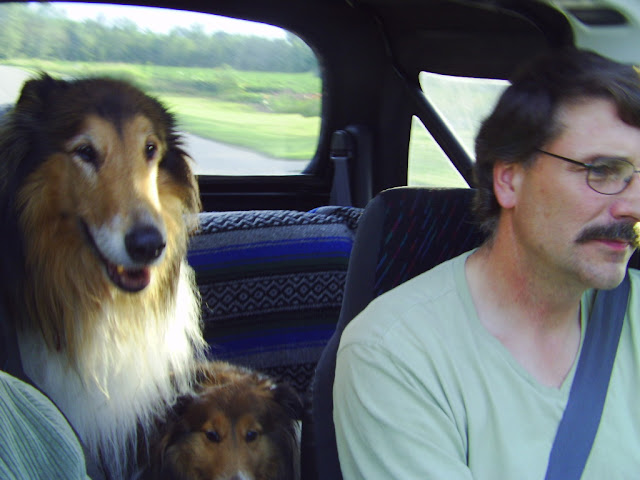 I suppose my next blog will be about installing the powered windshield shade....

.
Posted by KarenInTheWoods at 9:22 PM