Crazy Friday and suffering from Hitch Itch this weekend

Whew, what a crazy Friday!

Started out easy enough, with no babysitting on my schedule.  So I was going to *sleep in*.   Ahhh, not to be.  It was the thunderstorms, lightening, rain and shivering, shuddering, shaking dogs prevented that from happening.    (they don't like storms)

So I was up and at em, and out the door by 8am to register the Tracker and pay our sales tax and plate transfer.  Fortunately, we had the truck plates we had just renewed for the Nissen pickup that we sold. Were able to be put those plates on the Tracker.  Technically the Tracker is considered a *car* because of the passenger seat in the back. But can be registered as a truck too.  So next year when renewal comes up, we could change it to a car plate.  Both truck and car are the same price now in Wisconsin, so there really isn't any benefit to changing it I guess.

Once that was done, I went over to Erin's house and we took wee Chelsea with us 30 miles north to Marinette.  We were getting the groceries for the shower meal on Sunday and had planned to stop for a mani-pedi for Erin while I watched Chelsea, then maybe a lunch out, and maybe some other shopping, who knows.  But enroute I decided to place a call to Mom.   That changed everything.

I knew my Cuz John was up there on his Harley, visiting all of them in the U.P.  And I knew he was going to be coming through by our house on the way home to southern Wisconsin.  I wanted to double check with mom if he was taking off on the motorcycle through all the storms or going to wait a day till more of them passed.

Mom hemmed and hawed at first, but finally admitted they had been planning on leaving in a few minutes to come down and surprise me!  They had just loaded up John's Harley into the back of their pickup truck and they were ALL coming down for a visit!  (plus bring our tow bar to us that my brother had, and pick up a lawn mower we had for them)

Oh boy!  Now we had to quick get our groceries and skip the mani-pedi and get back to my house before they got there.  We were only half an hour away, and they were two hours away.  So we had time.

I picked up an apple pie and a cherry pie from the bakery for them as a treat, I knew I wouldn't have time to bake one.  Lowell loves getting apple pies from me, and it's something I know I can do for him that he likes...

Got home, got the groceries all put away and sure nuff, here they came! 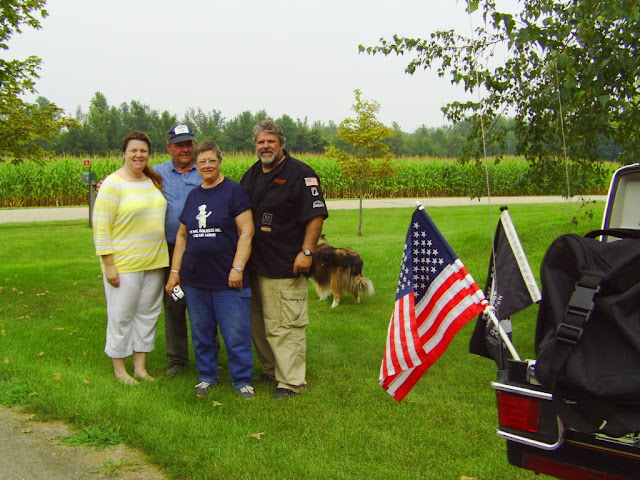 He bought the Harley from them during the Spring when he visited them in Florida.
Gosh, he looks good with it, like it was made for him! 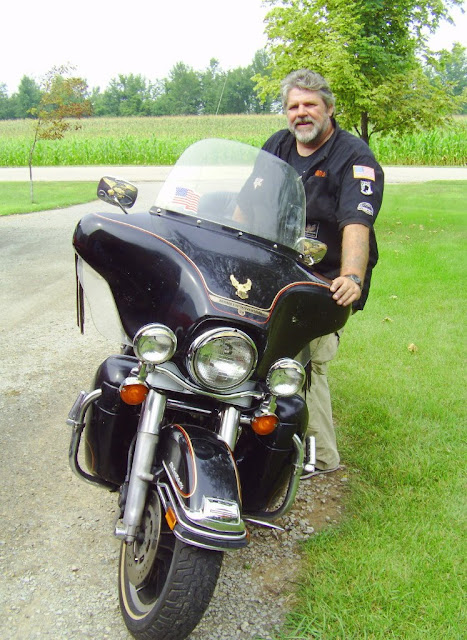 He took the time to re-gild all the eagles, and really dressed the bike up.  He added some fringes,
flags and all his little touches.  He drove it in the parade on Veteran's Day too. 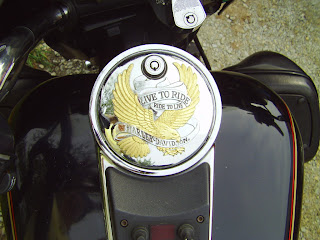 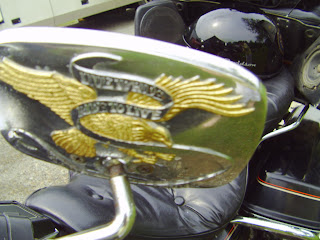 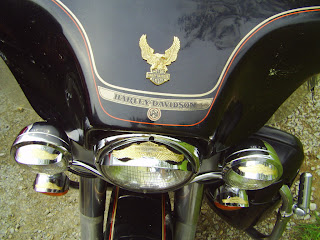 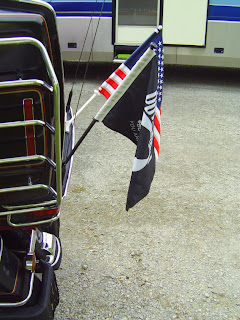 We enjoyed our pies, and then Cuz John wanted to take off from here to get ahead of the storms.
So it was hugs and good wishes for a safe trip, as he hopped on his Harley and hit the highway
Now it was close to 2pm.  Lowell wanted to run to Green Bay (35 miles) to get some things at Harbor Freight store.  Right next to it is Goodwill, so mom and I wanted to go along!    We called Steve at work and told him to stay there, and not to ride home with the other co-worker and we would pick him up on our way past the university.
We picked up Steve and headed to the stores.. while we were in Goodwill, we heard TONS of rain coming down, huge boomers and cracks of lightening ... all was very dark outside in the parking lot.  Suddenly there was hail,very BIG hail!   Lowell and Steve had taken their nice new pickup truck and drove over under the Goodwill drop-off drive through canopy to keep the hail off!   The guy wanted them to move, but Lowell said not till the storm was over, and nobody was coming to drop things off anyhow.
We finished shopping and dodged out of the store through the raindrops when the guys pulled up to the door of the store for us.  Whew!   It was AWFUL driving back up on the highway... drivers were pulling over here and there because of the decreased visibility.  Some were braking constantly and stopping on the interstate in the middle of the road.  How dumb!   If they kept rolling to the next exit or overpass, they could pull over instead of the middle of the road!....   Finally we reached a spot where the police were there, waving folks to keep going and not stop in the middle of the interstate.  Either pull over or keep moving .  We kept going and made it through as it was letting up the more north we got.  We later saw on the news that Green Bay got almost 3 inches of rain in one hour.  (the hour we were there)
The folks loaded up a few more things from our house, and we discussed Lowell doing the body work and repainting on the little Tracker.  He might have some time this fall to work on it, or else next spring perhaps.   They wanted to get back up to Michigan in time for the truck pulls at the Iron County fair... they hit more rain and storms on the way home, including fog.  By the time they got back up to Michigan, the truck pulls had been cancelled.  So they stayed in, warm and safe and dry,  and ate leftover apple pie that I sent home with them!
After they left here, we worked on a few projects on the motorhome and the Tracker to get it all ready to tow.  Soon we went to pick up Steve's car from the Park N Ride where he left it at 5 am in the morning.   I got to drive the fun little Tracker there and back.  What a cute little vehicle!
We tossed some burgers on the grill and tater salad and finally relaxed in our livingroom for the evening.
Whew, what a day!
Posted by KarenInTheWoods at 9:04 AM