In the last blog, I told you Steve would be needing a new pair work gloves. Sure enough, we were able to pick some up in a size that was comfortable for him.

Yes, he always needs work gloves, of course, but now we got a few special jobs lined up that he will be using them for. At the same time we had swung by the Tractor Supply Store and noticed that they had some trees on sale. Nice big tall beautiful leafed out trees! They were only $29 each.
We picked out a gorgeous ornamental cherry. It's called a Yoshino cherry, and is a related cousin strain to the ones that bloom in Washington DC every year.  It is said to bear large round 1" black colored cherries. It is really more of an ornamental tree, but the birds and the deer will love them. It can grow between 25' and 50' tall... the 1st year we can expect it to grow 2' or 3' more.
We popped it in the back of the saturn and hauled it home, along with his new leather work gloves.

Steve looked pretty happy to be coming home with a tree. At our log house out on the river, we had planted a beautiful cherry tree for his birthday. That was many years ago in about 1998. That tree is gorgeous now when we drive by that old house. It is time to start a new tradition by planting this one here, in this yard.
Also, our sweet father, Pops Pfundtner, ordered us FOUR new apple trees to arrive sometime soon.  We will be excited to start a little orchard in our big backyard.

We have the cherry tree sitting in the garage, waiting until we get some proper fencing on hand to put around it after we dig it into it's chosen spot.
We learned our lesson in spring 2019 when we planted a housewarming gift apple tree from our kids. We were going to get fencing the next day to put around it. The deer got to it that first night and chewed it all down to only a few bare twigs remaining!! That one is recovering slowly, but it sure was a set back for the important first year of growth.
So we will be more careful this time. It's about 8-9 ft tall already.  Anxious to see it prosper and grow.  (and bloom!)

That means that this one will sleep overnight in the garage until we get some more fencing materials tomorrow. It was too rainy today to do much of anything for the rest of the day.
Speaking of trees, the other night the sun was going down and the light from the West cut through under the heavy clouds across to the East. I love that time of day.  It reflected so beautifully on our big cottonwood tree with the dark stormy clouds behind it. I ran out with just my cell phone camera because I know it would only be like that for a few minutes. I think it made the most beautiful stunning picture that I've ever taken???

This is with no filter, no touch up no manipulation whatsoever, other than just a shot from my cell phone.  I was so surprised.

Here is a wide shot of the backyard

~~~~~~~~~~
Another project that I had in mind came up while we were working on that little back patio slab. Last year when we put up the screen door, when it was purchased it was all bare wood. I brushed on white paint from the one side, but the other side that had the screen you could not reach it unless you took off the entire screen material. So instead, at that time I just spray painted it from that side. Of course spray paint got all over the screen on that side and it looked blotchy. I guess that I didn't really care because we never were on that side of the house to look at it from the outside. From the inside it looked fine. LOL But now that we are doing this little patio are and planning to spend more time in that part of the yard, the screen on the door looks just awful! 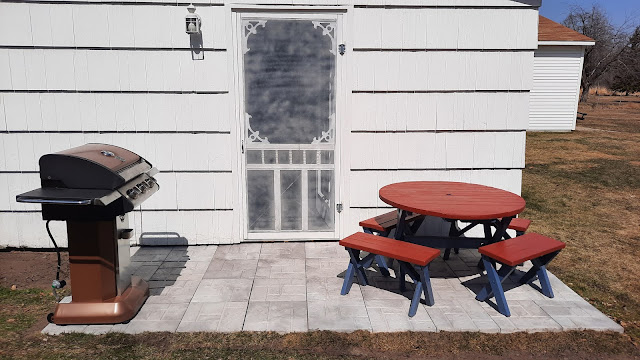 We picked up a little $5 roll of fibreglass mesh screening to replace it. We already had the spline tool, so it wasn't going to be a lot of work. We just needed to get around to doing it.
Steve took the door off the hinges and brought it to the garage where it would be easier to work on horizontally on a flat surface than trying to do it while the door was still hanging on the hinges.

I helped with stretching the screen across the frame while Steve carefully rolled the spline back into the groove. It helped to roll the edge of the screen around a long dowel of wood and pull the entire dowel rather than in small sections. That let us stretch it more evenly. I don't have a picture of that because my hands were busy holding the dowel.
Once all the spine was back in place, then we carefully trimmed around the edges of the excess screen material. At first Steve tried a big scissors but that didn't work. Instead I went in and found a nice tiny craft scissors. It was slow going but it was much sharper and got closer to the edge of the spline. Safer to use a scissors than trying to use utility blade, which just our luck could have possibly cut the new portion of the screen.

There we go -
5 minutes later the job is done!

Putting it right back into place was pretty easy. The holes were already there from the hinges, so it was a quick zoom zoom zoom and the job was done.

Why didn't we do this sooner? It sure looks a heck of a lot better than the spray-painted screen! I guess sometimes if it's not something you see everyday right in your face, you kind of ignore it.

It faces out into the fenced-in backyard so nobody else really saw it either. Other than the dog going potty! But now with the grill out there and the little patio furniture, it will be much nicer to look at.

I also had Steve bring out my cute little rain barrel. I painted this at the last house and I really think it's kind of sweet. Even though we really don't need water yet for any plants, we put it out into place just for the fun of it. I have another one painted with red designs up on the north side of the house too.  I don't even want any water in them yet because it could freeze and wreck the valves. So the temporary downspout for the winter is still in place, routing the water away from the foundation.

Speaking of freezing weather, did you know three years ago we had a super duper winter blast snow storm blizzard? It dumped 29 inches of snow here in Oconto in a 48-hour period! It was high winds and huge drifts. This is a picture from at our daughter's house, how drifted in her yard was. She had spent most of the night in her Jeep in a snowbank down the road. Even with four-wheel drive she couldn't get out. Her husband Jesse was home with 2 small kids and only a small minivan that couldn't get through the snow to her. Her cell phone battery was dying and she managed to get a call out to me and also to her nearby friend. He was able to get up and drive as far as where she was buried in the ditch. He gave her a ride back home and they went back the next day with a tow truck to get her Jeep out. This picture below is just from their own yard once she got it home, not where the jeep was stuck in the ditch. The high winds made a mess everywhere the next two days! 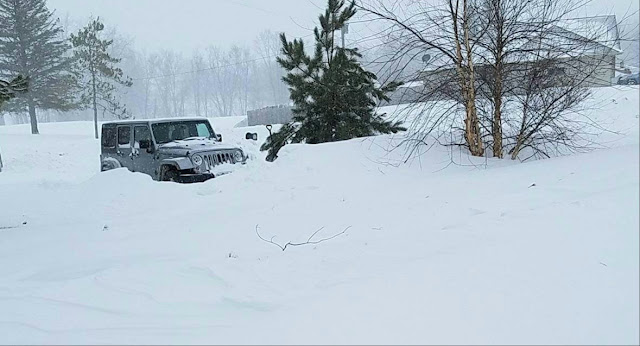 So even though right now we have beautiful grass starting to green up and the tips of the irises and lilies are poking through the ground. The buds are coming out on the trees with teeny bitty tiny leaves. But at any time, the weather can change and it can turn into this in Wisconsin in April!

On a personal note, I am extremely pleased and happy, ecstatically really, to report that after my sister's multiple tests and cancer surgeries, the pathology reports have come back. The cancer has NOT spread to her lymph nodes, and contained everything within the margins taken during the last surgery. She now comes back down for scheduling her radiation appointments. But things are really looking up and it is the best possible news!!!

The other best possible news is our nephew's little boy. Bennet, who had Pediatric Hepatoblastoma on his liver, had a transplant exactly one year ago. He just now had his stent removed, a year to the day since his transplant.  Blessings to the family who lost a small child for the donor organ. All of Bennet's testing has shown that he is now cancer free! 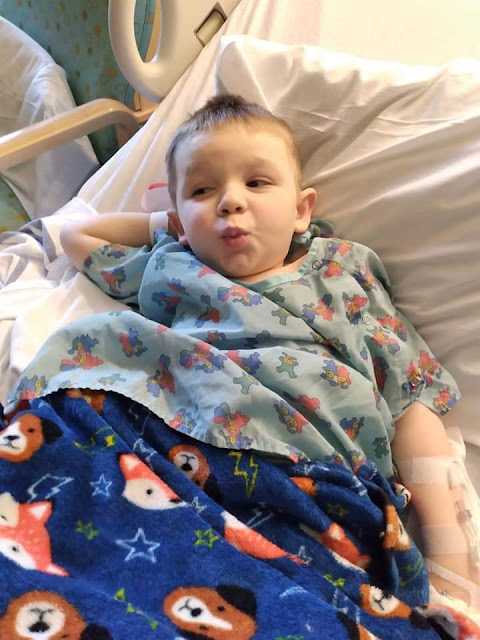 Way to go Linda and Bennet!!

Posted by KarenInTheWoods at 11:46 AM