The Maiden Cruise of "The Green Bean"

We checked the weather this morning and it was going to be a beautiful day. Tomorrow and Tuesday were gonna be miserable, so we decided it was either go today, or nothing!

It was time to take our famous canoe, The Green Bean, on its maiden voyage!

Ever since we bought it a week ago, the weather has just not cooperated.  We've been itching to get out and take a paddle around.  You know, to try it out.  It's exactly the same canoe as we had before in 2012, but a different color.  We know how it handles, but we wanted to play with it!

Nearby our home, actually less than half a mile, is a channel of water that is routed around a levee. This is property surrounding Wisconsin Department of Natural Resources land that is a wildlife refuge. It's a protected marsh land for migratory birds. It is called Green Bay West Shore State Wildlife Area. 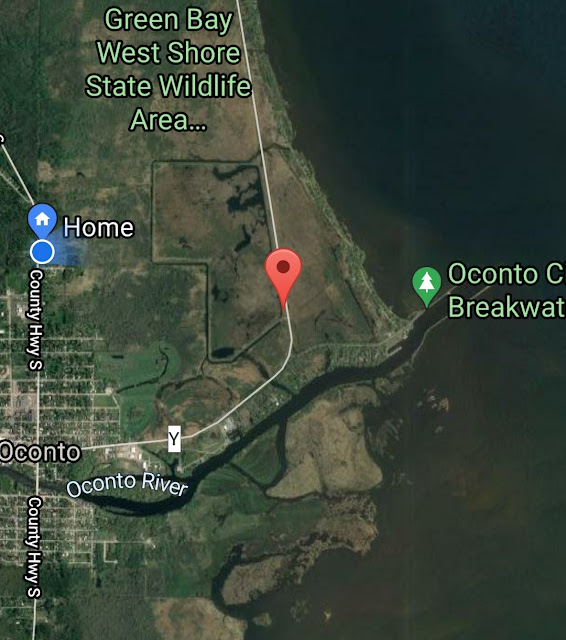 It's just on the other side of the Northeast Wisconsin Land Trust Preserve, directly behind our property to the east.  As the crow flies, it's 4 tenths of a mile to the channel.

Our plan is to load of The Green Bean canoe onto the roof of the Saturn, and drive around to a little parking area on the corner of this levee system. We chatted with someone else who said that she has kayaked around it.  With the water levels up this high right now, there should be no problem at all going through with a canoe.
Our proposed route:

The outside temperature hit 60ﾟafter lunch, so we popped on out to the garage and loaded up The Green Bean. The two of us can easily lift it up onto the roof. It is 80 pounds. We tied it down with straps to the front tow bar mechanism and the back hitch. We also can put another strap around the middle that goes through the rear passenger compartment. But since we were only going about a mile, we didn't bother with the middle one. We tossed in our life jackets, paddles, seat cushions, my go bag with a first aid kit and some water bottles. We also have a triple zipper sealed bag designed for a cell phone in case of emergency. 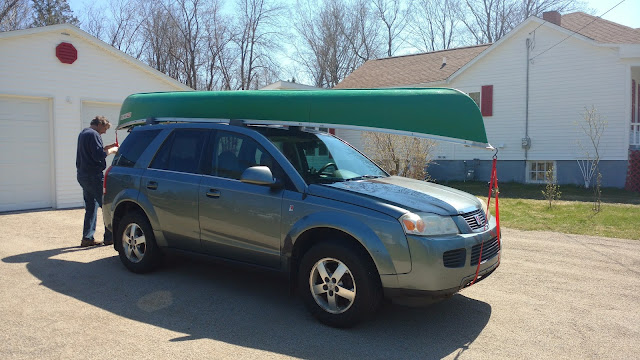 We got to the parking area and unloaded the canoe. We had to portage over this little walkway bridge. This bridge prevents people from going into the preserve with  ATV's, dirt bikes or other motorized vehicles.
It was a beautiful blue sky / puffy white cloud day!  There was a slight breeze and it was just perfect conditions with a light jacket. 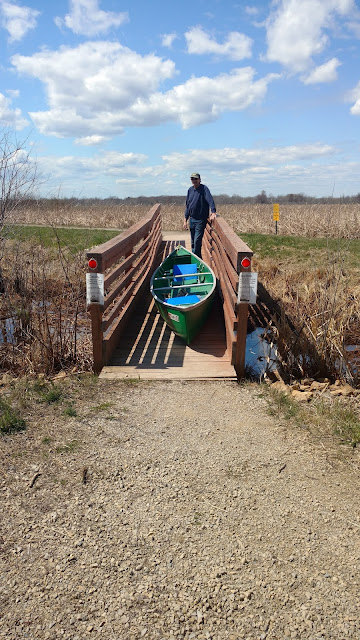 Just on the other side of the walkway, we were able to find a nice easy area to launch the canoe. We loaded in our gear and it was time to set sail.  LOL 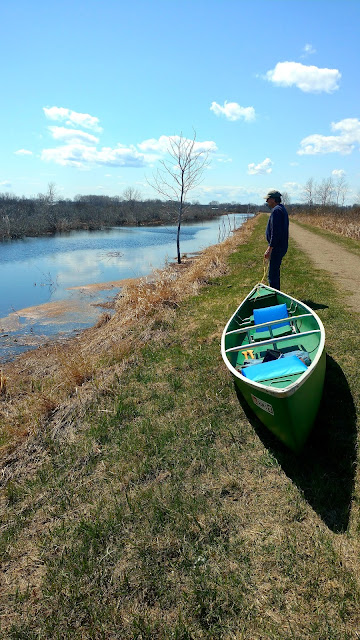 Here we go piddle paddling around. There is a silly little camp song I know about:  "A Boy and a Girl in a Little Canoe". That song kept running through my head. We floated on through the water and looked around at all of the beautiful marshland.
Even though things are not greened up yet, the sky was so blue, making the water even bluer. At this time of year, there are very few bugs or mosquitoes--- so this was a perfect time to go canoeing through the marsh. I've always wanted to see what it was like on the back side of the levee. 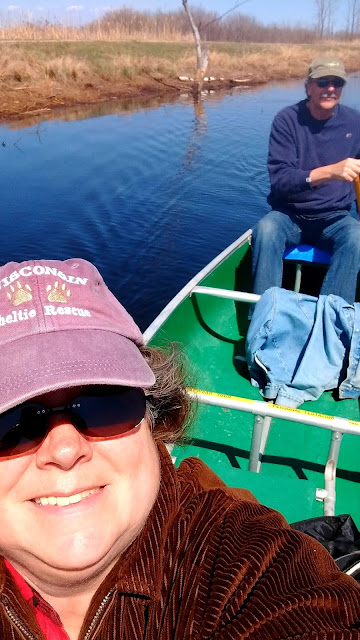 This marshland is part of the migratory bird route and an important part of the ecosystem. The levees are here not to protect the town, but rather to protect the marshland from ever getting drained down too low. If the water gets drawn too low the little critters and frogs and bugs and things that live here will no longer exist. That is what the huge flocks of Canadian geese, ducks and sandhill cranes need to thrive on their routes North or South. It is also a nesting area for a lot of the game birds as well.  So maintaining a good ecosystem of readily available food is necessary. That's why these marshes are preserved and kept wet and swampy. 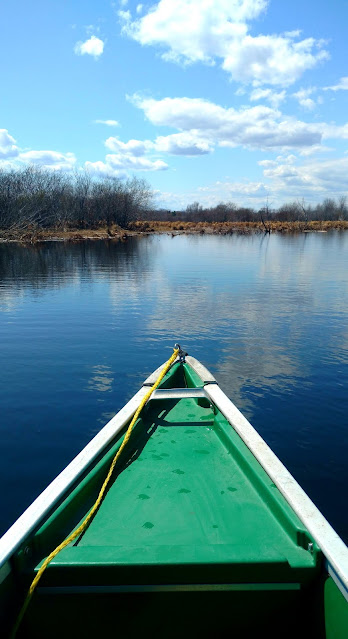 We only floated a couple hundred feet when we came across some beautiful Canadian geese. They looked at us, few of them honked at us, but we tried to be quiet as we paddled on by and not interfere. I don't know how many of them are nesting right now, but we didn't go on shore or disturb any potential nesting sites. 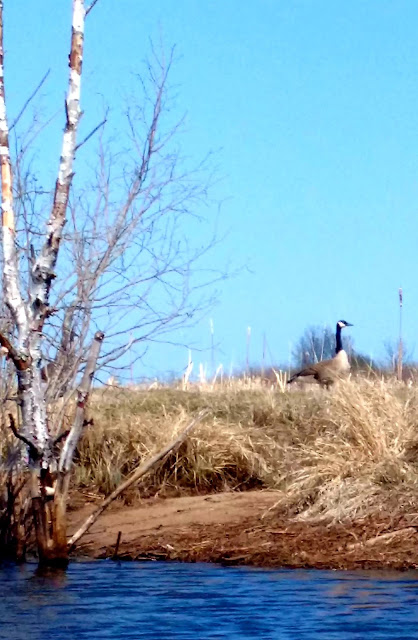 A few times the geese would fly up in the air as we paddled past. Then they would fly back to where they were, so I am guessing they are nesting in those areas. 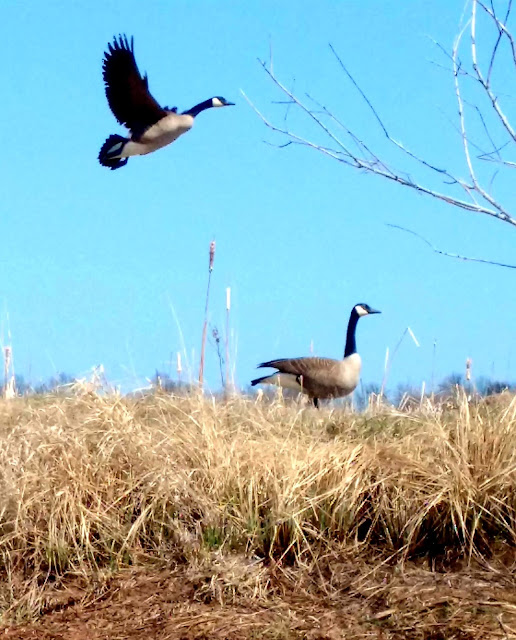 We slipped along quietly through the little waterways, working our way to the West. From time to time the winds would blow a little stronger. It would create some waves, but we were basically floating along in pretty calm water. 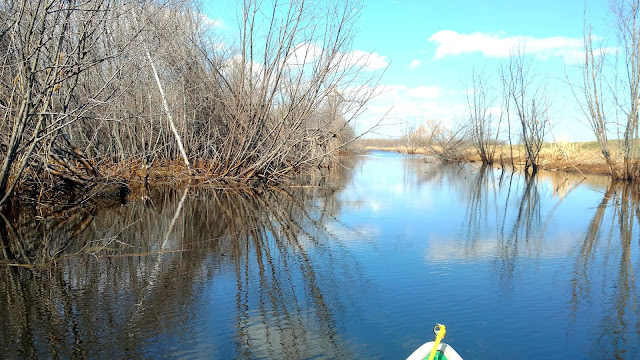 We managed to paddle right up alongside of these geese in a row. All 4 took off at the same time. I was using an old cell phone that I don't care if it gets ruined, and I quickly managed to snap snap snap the pictures.  I caught all four in motion. 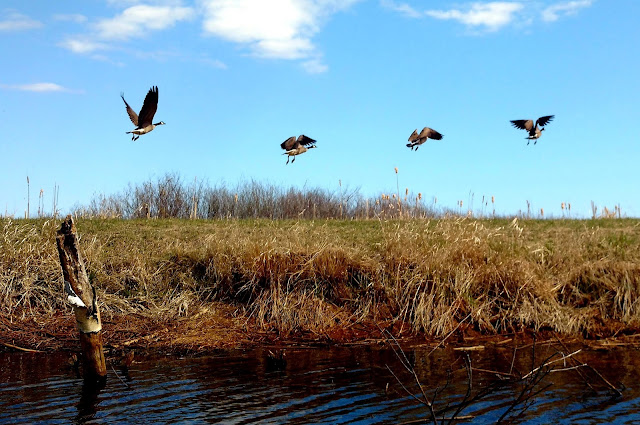 As we slipped on through the waterways, this beautiful tall marsh grass was dipping and swaying in the slight breeze. It was peaceful and soft, making a quiet rustling sound. 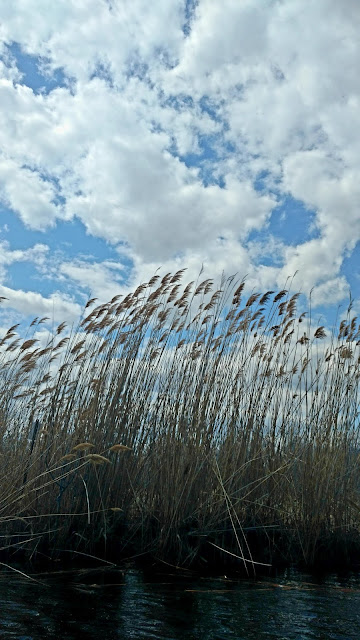 Every time we turned the corner there were new photo opportunities or interesting things to see. At one time all of the levee area had such low water levels due to drought, the trees had started growing in on the side and bottom of the channel around the levee. The maintained water levels are on the other side for the marsh.  It was that way for 10 years or more. Now that the Great Lake levels are so much higher these last few years, the water levels in the levee are higher, thus killing off the trees. They look like some strange stark skeletons standing up here and there. 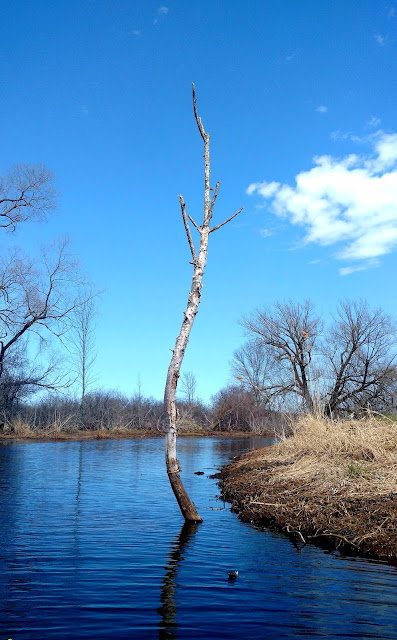 Along the top edge of the levee all the way around is a walking path. Periodically located here and there are some benches for resting. Maybe someday we will head out here with the dog and walk all of the way around. I think it's about 4 miles total. 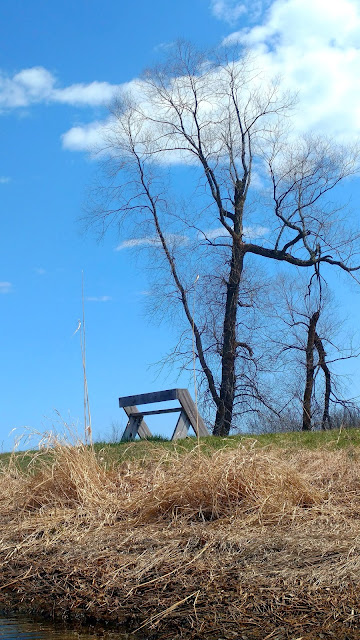 We saw some signs over at the parking area warning us about the muskrats. The signs said they had made holes underneath the levees in various places so they warned you to watch your step. As we floated around this corner we saw some muskrats swimming across on the water and taking off down in the holes around this tree stump. It was too late for me to grab the camera out of the zipper bag to actually photographed the muskrats. But here is their home: 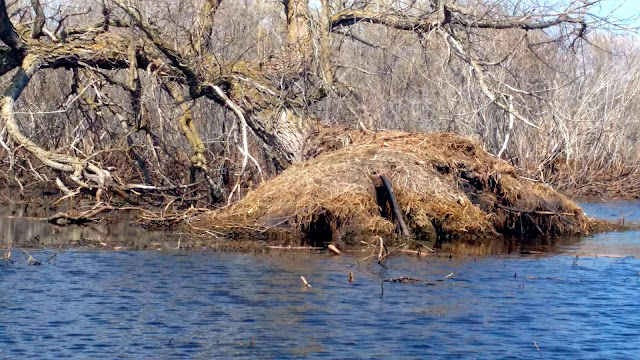 Floating along through some of the wider areas of the marsh, we could see where the overflowing water stretches across over to the golf course at the edge of town. We paddled over a little ways where we could even see the Hi Seas Marina across the road. This was never open water before, it used to be a marshy field.  It was quite a large area of water that we could now paddle around besides the little channel we had originally decided to plan a route on. So we got in a little more paddling than we originally thought. 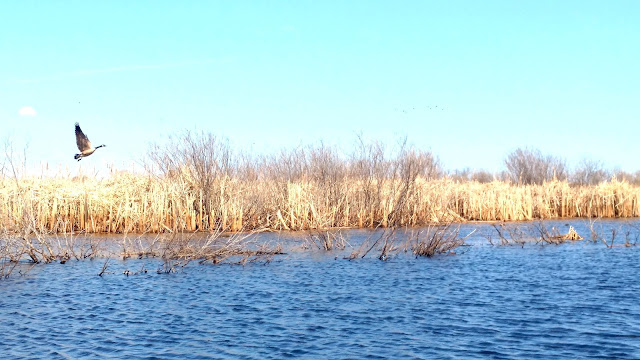 We worked our way around the entire levee system and made it back over to where we could portage out over the levee or just park by the road and walk back to get the Saturn. Maybe next time will portage over the levee and continue on the inside waterway. But for now, this was enough paddling for one day. The winds were starting to kick up and we wanted to head back home 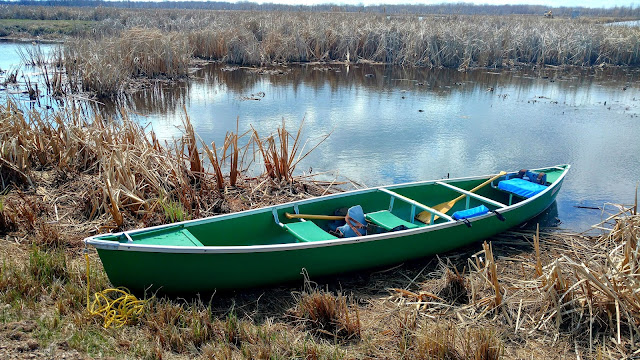 Now that we got The Green Bean anointed with her maiden voyage, it was time to bring her home and settle her into her new resting space in the garage.

We had come up with an idea to string her up from pulleys up to the rafters of the garage and get her up out of the way.

We unloaded the canoe into the garage in the middle between the 2 garage doors where we had hung some pulleys and threaded them up with some ropes. Inside the canoe, we tossed the paddles, the cushions, the life jackets etc all of the gear that we would need the next time.

Crank crank crank
up she went
raising to the ceiling.
This really was working out rather well!

I can completely walk underneath it without ducking, Steve has to duck a bit but he said he will just walk around it. We snugged it up as high as it will go. The garage doors can still shut and open easily with the canoe suspended between them.

So this will be The Green Bean's resting place when she's not in use, or tied on the roof of the Saturn getting towed around behind our motorhome.

The ropes are securely wrapped around boat cleats on the sides, tied out of the way. I think this is a great way to store the canoe so it doesn't take up valuable floor space in the garage.

"And there you have it"

Posted by KarenInTheWoods at 9:06 PM