We are finally starting to feel better on the twelfth day of being ill. Not quite a 100% but I would say at least 85%. Maybe me closer to 90%.

Since we were doing better, Steve said it was time to hop to it and finish up the rest of the patio. But we need to quit by 3pm.  He said that since he is retired, that 3pm is a good quitting time.

We picked up the last 12 blocks that we needed to complete the patio all of the way to the corner of the kitchen nook.

We hoisted the last 12 blocks with the dolly cart around to the backyard. It was time to put on our gloves and get to work. Speaking of gloves, we are both wearing the leather out handling these rough stones. Steve's gloves, which were already worn to begin with, have now sprouted holes. Time for him to get new gloves? It's his birthday later on this month, so I know what he's going to get! 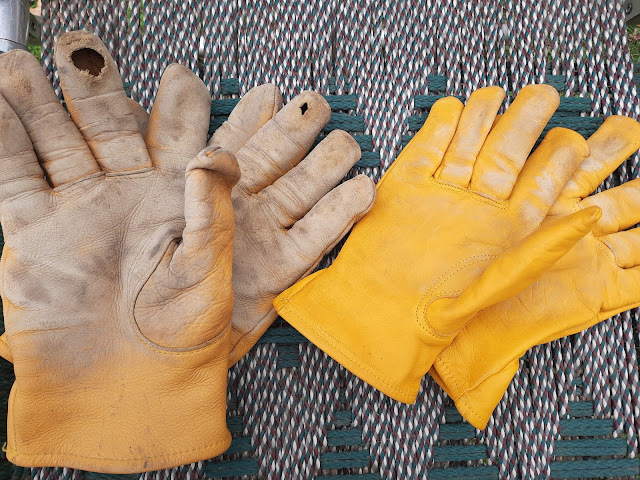 We started out with the last 2 buckets of sand that we had on hand. It was enough to get another row done. We carefully get the underneath level and then the sand is tamped down firmly. We level it with a board and then finally we're ready to lay on the blocks... one at a time. Each block is levelled East West North and South and then we tap it down into place with the rubber hammer. 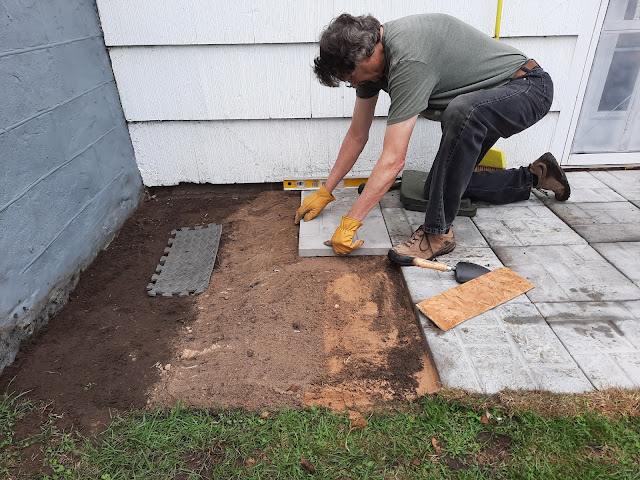 Our supervisor made sure that we were doing a good job. She's quite the task master. She said we need to keep moving and there is no time to sit down in the lawn chairs and take a break. It was going to rain soon and the skies were threatening to open up. So she said there was no time to waste--- 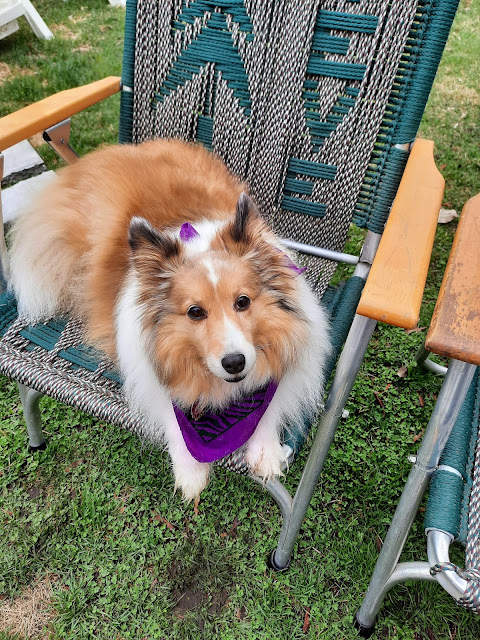 We did have to take a break and head out to get a couple more buckets from our daughter Heather and son in law Jesse's house. Gratefully, we have been able to rob sand from their yard to do the rest of this project. Thanks Heather and Jesse!
Bit-by-bit and stone by stone,  we were able to finish the last 12 pieces. 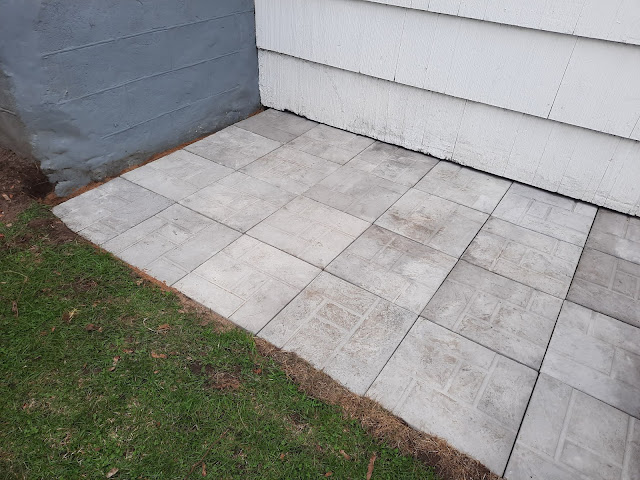 TAH DAHHH! And there you have it. What a difference from the original broken and slanted slab that was there before. 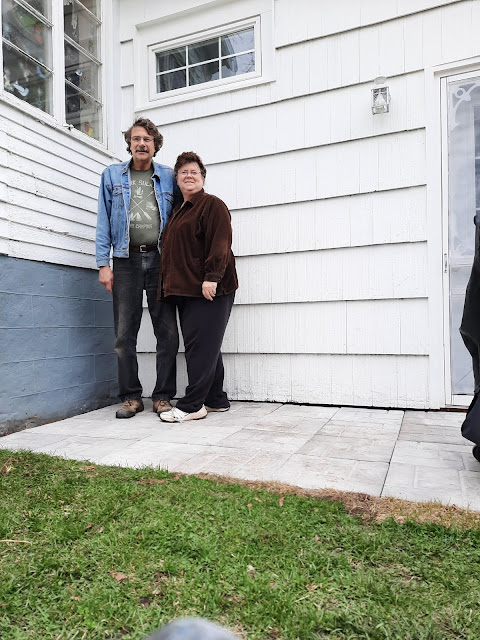 We moved the little table and benches over into the corner. Later on, when it warms up, I will have the grandkids over to let them paint it with a fresh coat of red. Steve moved his grill into place on the other side. Now it's only a few steps inside the door, up to the kitchen, when he grills out to create his wonderful masterpieces. This makes so much more sense than having the grill way over on the other side of the she shed by the garage. 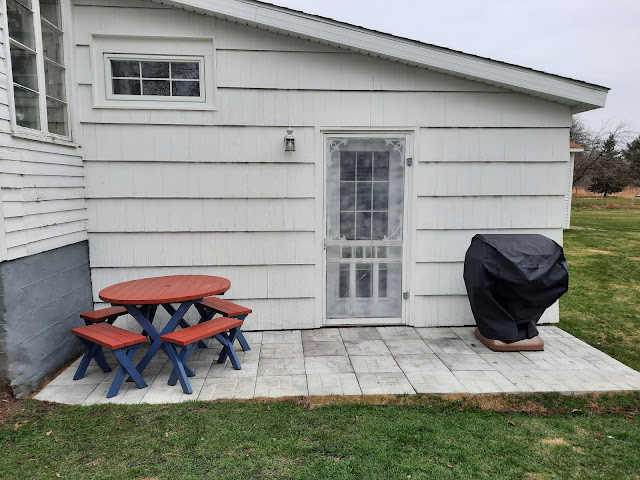 One more thing we completed is this little cement square piece of chimney block. It is the perfect base for my big beautiful rain barrel. You can see the temporary winter piece of brown downspout directing the water away from the basement foundation. Once it gets nicer out, with no more danger of freezing, I will put the rain barrel into place on the cement rectangle. Then we can let the water run in from the downspout and have the overflow directed away from the foundation. Just thinking that it won't be long and it will be time to start planting tomatoes! 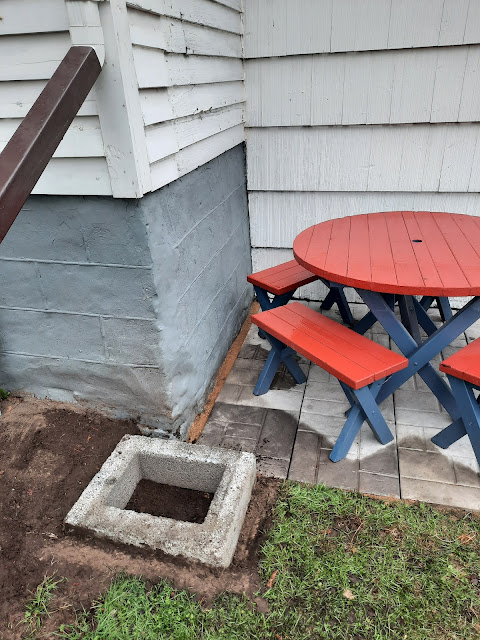 We buttoned everything up and put away all the tools. It was time to head on in and warm ourselves up. The weather was turning cold and damp as the rain drops were starting to splatter. 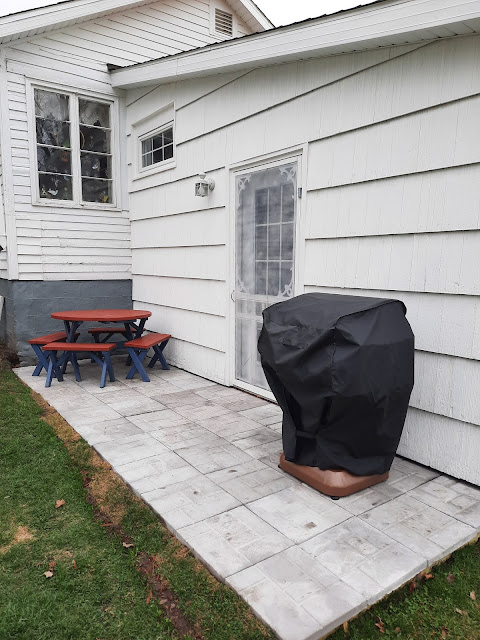 Hint of the next upcoming project is replacing the windows all around that little kitchen nook. They are rather rugged looking from the outside right now. Then we are adding a large window in the Master bedroom, to the left of that old basment door opening. Once we replace the windows, then we will replace all of the siding on that whole section as well.
We made the backyard fenced-in area little bit bigger by adding a few more panels and curving the fencing outwards in a big arc. We put 2 of our white reclining chairs within the fenced yard and the other 2 on the outside nearer to the fire pit. If company comes, we can just lift the chairs up over the fence in either direction to make a grouping of 4. 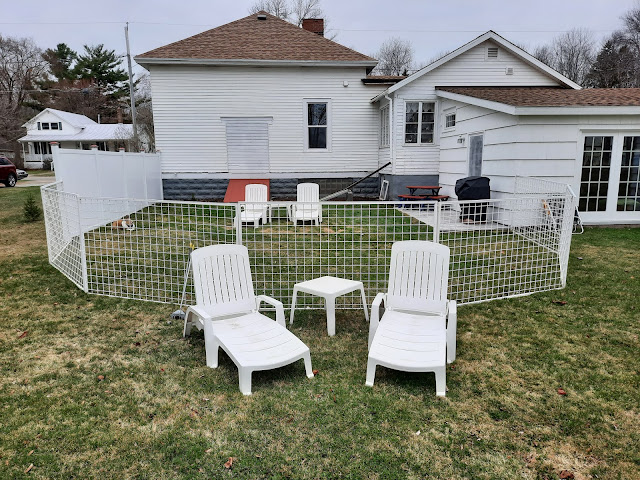 ~~~~~~~
To finish up on the rest of the last blog I posted, Steve completed doing the brakes by adding the new brake fluid by using his little bleeding tool with the air compressor. It is good to draw all new fluid through the brake lines every year or two on a motorhome. With the long runs of brake lines and multiple fittings, it's very easy to get moisture intrusion over time. Swapping out with new brake fluid every year or so is a good idea. 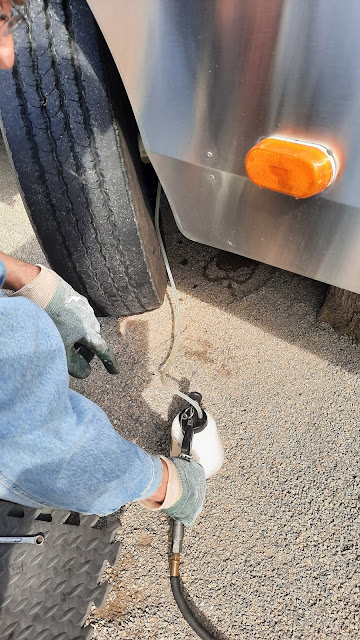 Once he topped off the brakes and got all the bubbles out, he put the wheels back on. He tightened them up as tight as he can. This week he will get ahold of Nick at Oconto Truck Center to torque them to the proper specs. It's only a mile or so away from our home, so that's not too far to go.  Then he can put the pretty stainless trim rings back on. 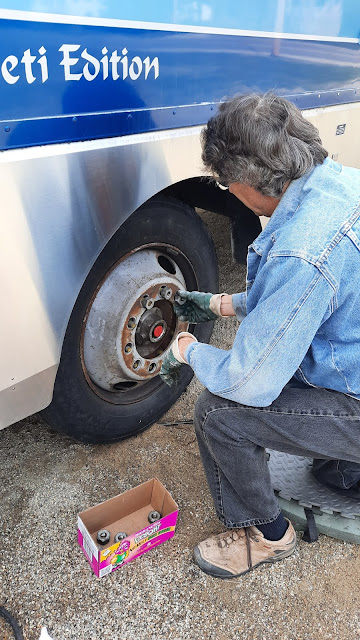 In the afternoon come I went out into the motorhome to start filling out my list of things to replenish for the upcoming camping season.  There are a lot of things we leave in the rig year round, but other items we remove in the fall so they do not freeze. Even things like aerosol cans and cleaning supplies come out. Steve came out to help me make my lists and go through cabinets and drawers. He brought the dog along too because she was missing me. Soon it started drizzling outside, so what did we do? We curled up on the bed and took a nap! It was a good time to do a test run on the furnace, which kept us cozy warm. We took our afternoon nap out in our motorhome in our driveway--- lol! 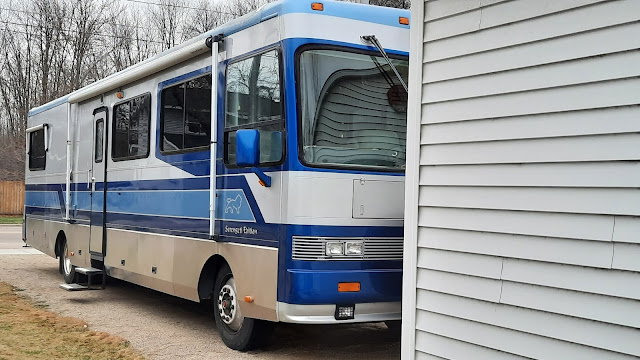 ~~~~~~~~
On my fiber front topic, I got all of the blocks sewn together on my quilt. I gave this main section (called a quilt top)  a good pressing with a little bit of starch. Now I need to add a few more strips of borders around the edges of various coordinating fabrics before I am ready to sandwich it together. I add the backing and the batting in the middle, as it's rolled onto my big frame where I do the free motion quilting. Once it's done on there, I unroll it and do binding around all of the edges to complete the quilt, along with a personalized tag. It will probably be for sale soon in my Etsy store. 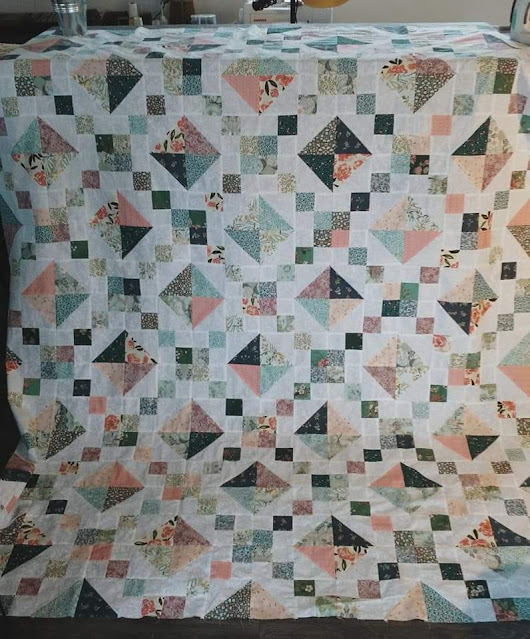 Here is a close up of the pattern. The entire thing is made out of pieces of 2 half square triangles, or 4 little patches. You can see how it goes together and makes the big design. Pretty clever! The pattern is by Eleanor Burns and it is called the Jewel Box Quilt, a part of her Quilt In A Day series. It took me more than ONE day! 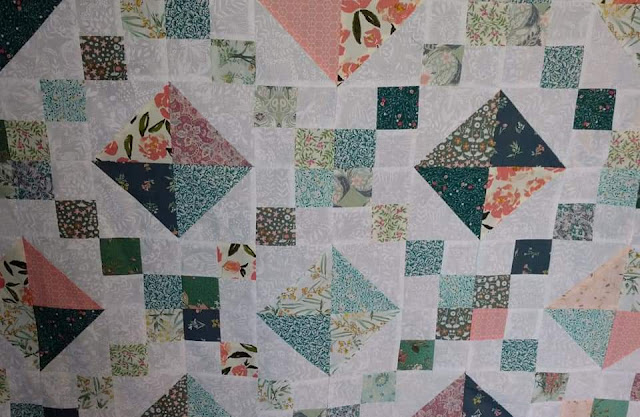 ~~~~~~~
(this part was added right after dinner)
My oh my, that Steveio is at it again. What did he spy tonight on Facebook Marketplace? Well... what do you know: 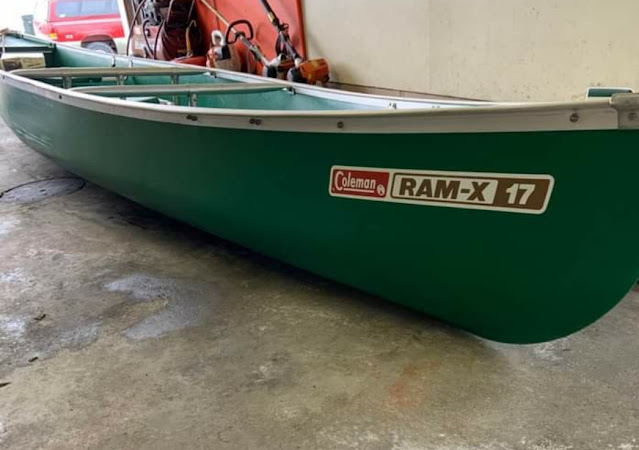 It was for sale by sweet 70 year old widow lady who had it hanging in her garage for years. Her son was helping her clear things out, and listed it for her on Facebook. It was all the way down in Chilton, the town we moved away from!!!  He held it till we drove the 70 miles to get there.  He was there to make sure she was safely meeting strangers at her house, and that nobody was going to take advantage of her.  We paid her asking price, and handed over the cash.  She was quite happy to hear that little grandkids would be going for rides in the canoe in the the future.
It fits quite well on the roof of the Saturn,
don't you think? 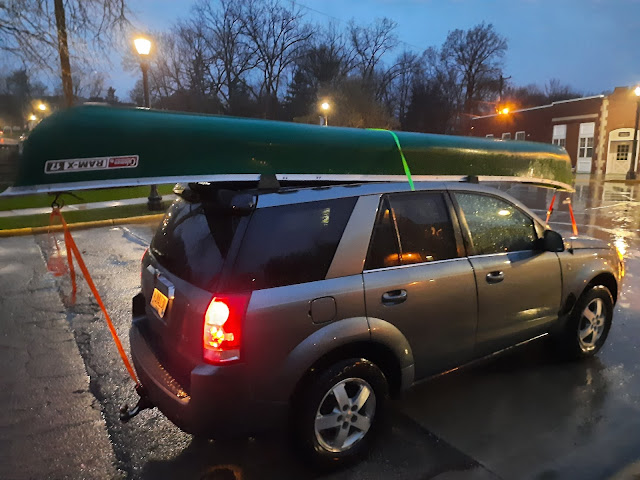 As we tow the Saturn behind the motorhome,
it can ride along beautifully in place.
Ready for more adventures! 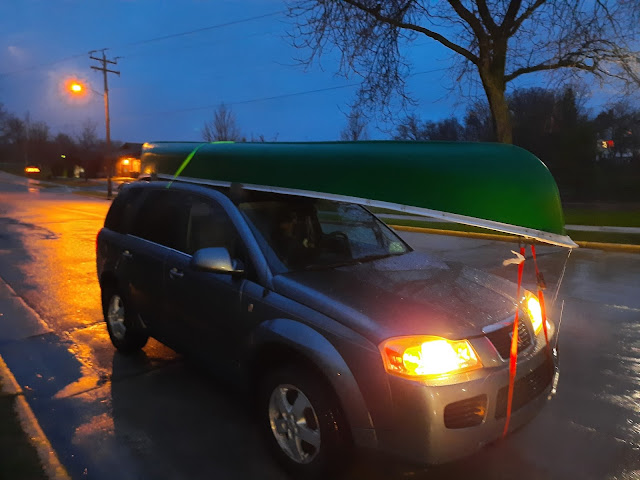 We used to have a red one like this years ago, the same size. We always regretted selling it when we moved away from Oconto in 2012.  It's the perfect time to get one again.
On the way home we stopped and bought new life jackets and cushions. It came with paddles and the car top carrying blocks.
Well it's getting late here and it's time to get this blog posted.  If it keeps raining outside tonight, we are gonna need a canoe to get down the street?
Posted by KarenInTheWoods at 10:21 PM