In my last blog, I talked about the need for adequate ventilation in our attic. Steve got all of the little eave vents cut out and installed. It made such a big difference. He felt the whoosh of air going into the eaves as he cut the openings and put the vents into place. Now the chimney effect of the air moving through the eaves up out through the upper roof vents is properly opened up for the attic.

The next task was to remove the old fiberglass batt insulation. It has been up there for close to twenty years. Plus, it's been covered in speckles of mouse poop and bat doodoo. The infiltration of the rodents has long ago been blocked up, but their remaining little bits and pieces were still all over the batts of insulation.

The rolls of insulation batts were somewhat compressed over the years of being in the hot attic. They were beyond their level of usefulness.  They had been hot and humid and full of moisture from inadequate air filtration. Some people might just roll out more batts of insulation on top of the old stuff and call it "good enough".

We determined it was best to remove the old batts of insulation and then correctly re-insulate the house with R40 or so of blown-in cellulose. This is a project we can do ourselves. Steve wants to get a good jump on this before the weather gets too hot to work up there comfortably.

Since he's been up there redoing the electrical wiring this past month, he realized on sunny days in the winter it is plenty comfortable up there to work. He would prefer to do it now than when it gets too hot this summer. The roof on our home is a medium brown tan color. But it could very easily get quite hot up there early in the spring season.

You know him, we might as well get to it now!

He decided that with my lung issues, he would be the one to do the "dirty work" and I sat this one out.  Sooo he worked up there the last couple days wearing a respirator mask, gloves, overalls, and safety glasses.  He immediately strips down and hits the shower as soon as he gets out of the attic each time.  Thank goodness. It's pretty grubby work, for sure.

He carefully rolled up each batt and tied each of them securely with rope. He stockpiled them right at the entryway to the attic.  Instead of dropping them all down the scuttle hole into the house, (ewwww) he created an easier access to remove them through the outside second story window in the gable over the front porch.  He has adapted the window to make it open up completely instead of just a sash type opening of only half of the window pane at a time. 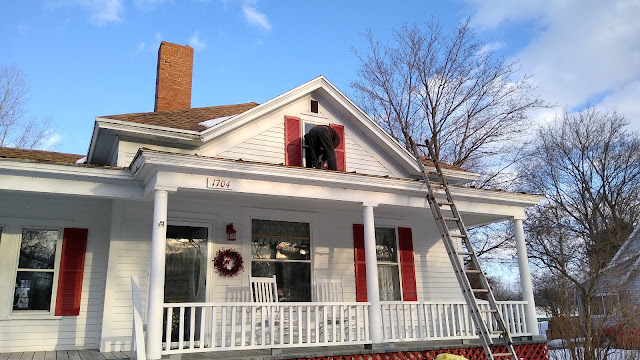 Earlier in the day we had a light snowfall, but that cleared up and the sun came out. He was waiting for the snow to be completely melted off the front porch roof for safety reasons. Today was the day to get everything out, because tomorrow the recycling center is open.  He can toss it out and haul it all away.

He warned me that he would start throwing things out the window so I grabbed the camera phone set on video mode.

And here they came out, bale after bale!

It reminded me of a farm boy tossing bales of hay. But instead of up into a hay mow, he was tossing them out and down to the ground. 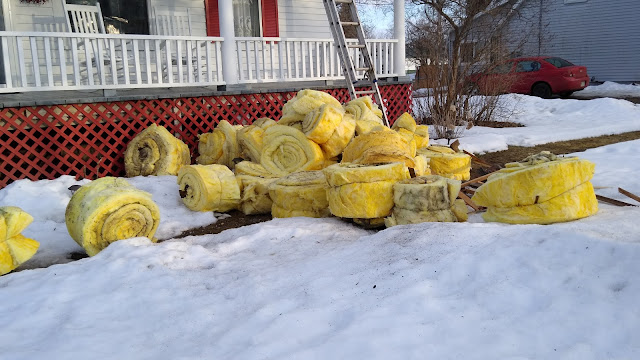 (my goodness what do the neighbors think of us?)

He also found a newspaper up there, dated 2002. I worked as a typesetter for that newspaper in 1998 and 1999! That makes it 18 years since that batt insulation had been spread out in the attic. We were told it was about 20 years old, they were right. 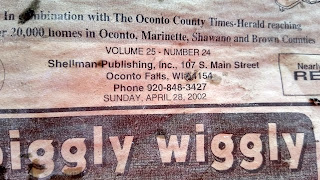 He finished off The Purge with a few extra pieces of odds and ends of wood and an old tin can that had been up there.


It didn't take him long, and he soon had them all piled up neatly on to our little trailer. Ready to go to recycling center tomorrow. 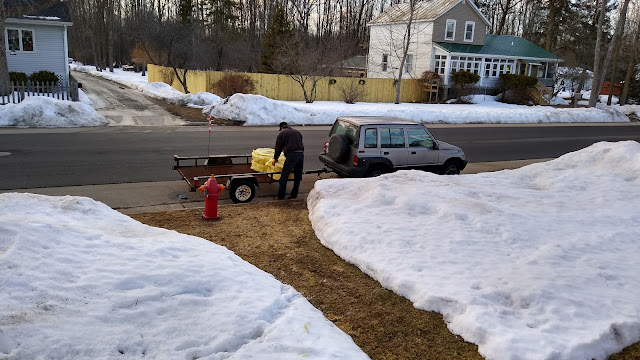 We are not sure what the city recycling center is going to charge us to dispose of this... It's 17 or 18 rolls of it. 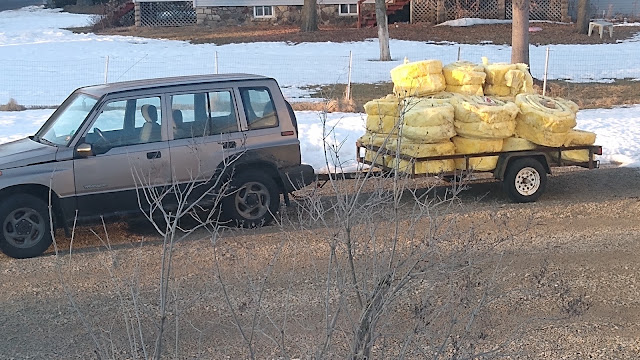 Good riddance to all of that old stuff. Soon we will get the new stuff to blow in and rent the machine to do it.  We are also going to cut holes in the walls from above in the attic to blow down from above into the wall cavities (which are hollow right now with NO insulation in them)  Our heat bills have not been bad this winter, under $100 each month for the natural gas.  But getting more insulation in the walls will help not only with heat next winter, but also the air conditioning this summer too. Untill we get it all done, I guess we'll have a little higher heat bill for the cold nights. But it's worth it to get this done ahead of the game and not wait till the last minute.

As far as my own projects, I got the newest king size quilt all rolled on neatly to the quilting frame. This is going to be a really big one. I don't know if I'll be able to quilt it completely to the far end of the roll in one step. I might have to stop 3/4 of the way through and reverse it around to do the final section. It's being quilted from side to side on the rollers and not top to bottom This is probably the widest quilt I have ever done. 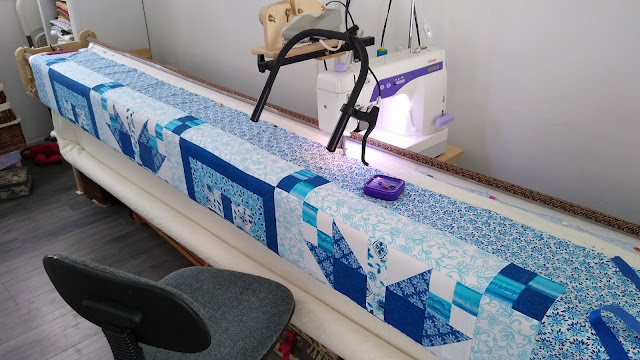 Because our king size bed is a high frame type, pretty high off the ground, along with our high memory foam mattress on top, a quilt that's longer down each side would be nice. So that's why I added an extra 6 inches to each side of a normal king size quilt dimension.

While I was busy today, happily sewing away on the first pass from right to left. I got down to the far left and didn't realize the bracket holding the power mechanism for my quilting machine would bump into the cabinet next to the frame. As it bumped into the cabinet I wasn't paying attention and the sewing needle went

I was sewn right tight to the sewing machine!!! Steve was up in the attic so he couldn't hear me to help.  I quickly hit the "needle up" button and got the needle out of my finger. I applied pressure as quick as I could, while trying to unwrap a Band-Aid that I keep in my sewing drawer. It was difficult to stop the blood flow while unwrapping the bandage with my other hand. 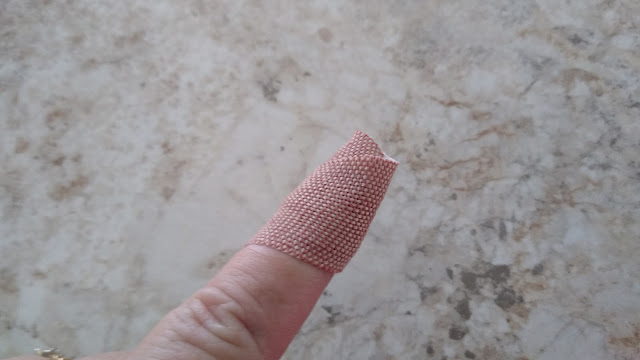 With a bunch of swear words I care to not repeat here, I was able to stop the bleeding and take a look back at my quilt.

Miraculously, there was not a single drop of blood on the quilt!!!

YAYAYYAAAA I was so happy to see that, it helped me to ignore the throbbing pain in my finger. It was so good to know that I was not going to have to be scrubbing red blood off my beautiful blue and white quilt. 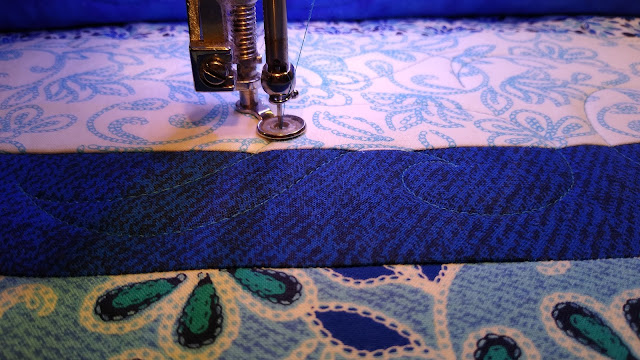 Once the throbbing stopped (and the need to swear had passed) I was still able to return to the quilting machine this evening and get some more done. 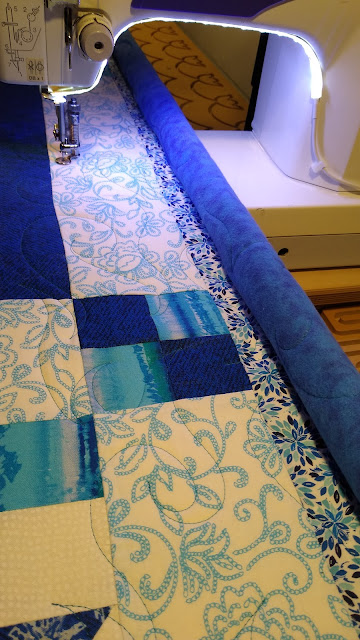 Ahhhhhhh  I am so glad that Steve went with my idea to put two articulating architect lights wired right onto the wall over my quilting frame. It lets me see the whole area while I work, even at night.  (and not sew any more fingers!) 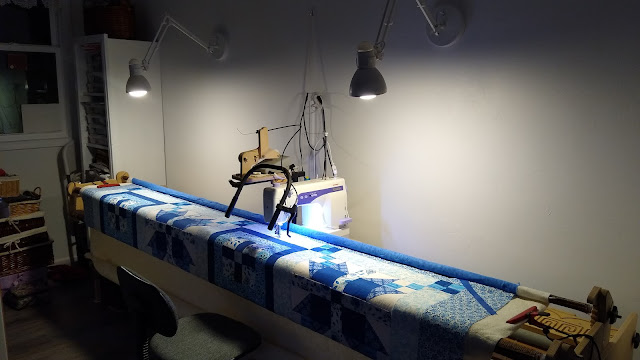 As I was typing this, Steve turned on the back yard spotlights.  Those stinkers had come to clean out the bird feeders again.  LOL 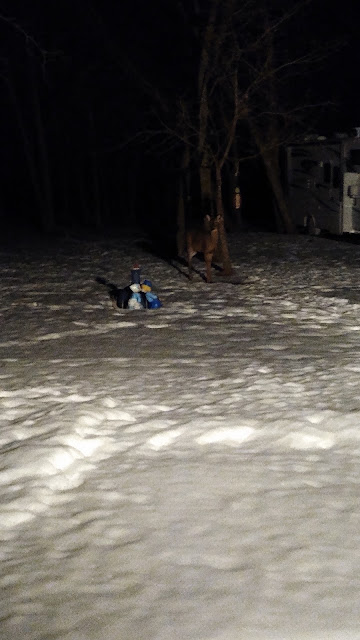 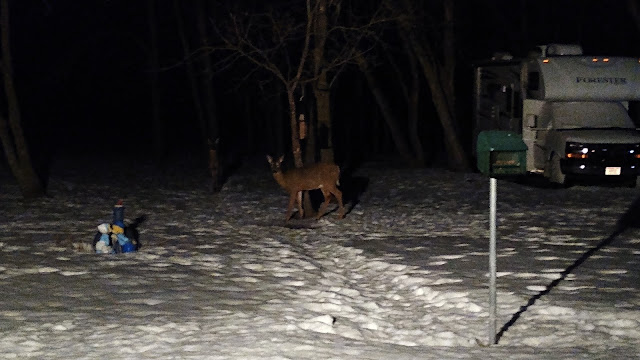 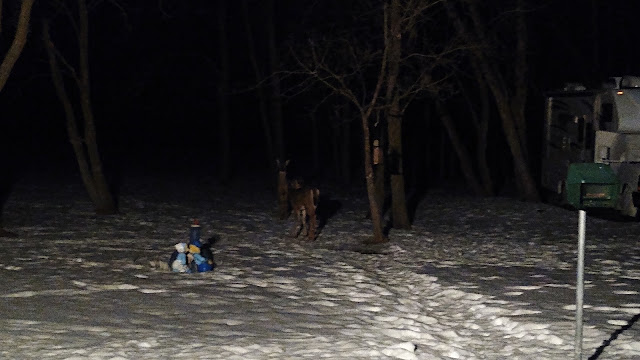 I think we are feeding more deer than birds lately.  I think the birds avoid the feeders now because they are full of deer saliva from those sassy tongues licking out all the seeds!

Posted by KarenInTheWoods at 10:04 PM