We Are Self Quarantining

No, we haven't had any tests. At this time we don't think we have anything. But I've been having a pesky dry cough for the last few days. Steve is having sinus issues. So it's best we just hunker down and stay home!

With my previous lung damage, and propensity to catch every little bug that comes along... It's better to be safe then sorry.  I have had pneumonia far too many times to count. My resistance is low and I don't want to tempt fate.

Our two daughters have offered to help bring us anything that we might need. We are well stocked up and can easily exist for a month or more on the groceries and medicines we have on hand. We may run a little short on eggs or milk --- I might have to bake bread if need be. I do have powdered milk. There's enough frozen veggies so once the fresh ones run out we will still get our greens.


Our son-in-law Waylen just dropped off
a "corona-virus care package"! 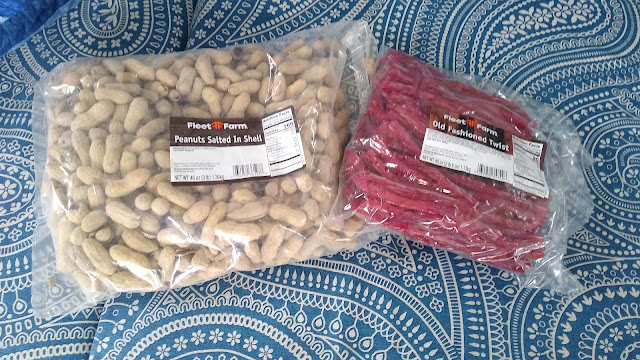 3 lb of Steve's favorite in the shell peanuts and 2 and 1/2 pounds of my favorite red licorice, courtesy of a run to Fleet Farm. I did wipe down the surfaces of the bags with a disinfectant wipe, just in case.  I think we are well-stocked in preparation. 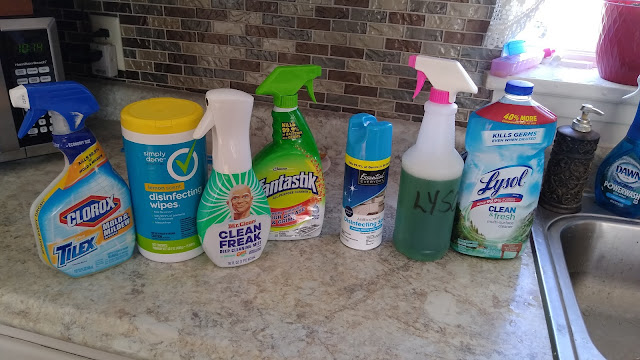 Heaven knows I have enough fabric and yarn to keep me busy for a lifetime--- so being self quarantined at home is not an issue at all!

Steve has a couple of Our National Folk Farmhouse projects lined up of things he wants to do. He did make one quick last run to the hardware store yesterday for a few more electrical boxes and dropped off our water bill at City Hall.

He is now "in for the duration".

Right now as I type this, he is caulking up a little crack in the wood in the entryway of the she shed. As the wood is drying out, there was a little crack around a knothole that needed to be taken care of. 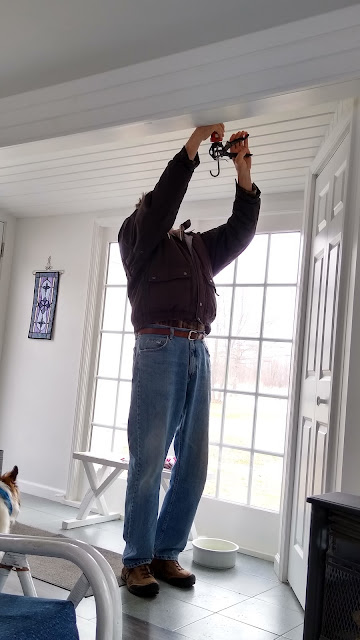 Now that he pretty much has the garage organized into what designated spaces are work areas, what spaces are storage areas, and what spaces are left open for movable things like lawn equipment snow blowers etc. He can now finish wiring up electrical outlets in sufficient numbers for what he wants where. He is considering how many battery chargers he needs for things like power tools, lawn equipment, and even running bigger power tools like the table saw and air compressor. He is planning out his diagrams and figuring out what outlets he needs where. He can get his electrical work finished out there, now that he has everything electrical done in the house.

Other projects include maybe removing the current patterned vinyl flooring in the bathroom, and replacing it with the roll of pretty creamy soothing vinyl we have waiting in the garage. We picked it up on clearance as discontinued stock a few weeks ago.  It means pulling up the claw foot tub, toilet and sink to do it.  Quite a project, but it will help keep Steve occupied and from going stir crazy.

I'm almost done with my big quilt... I've gotten all of the quilting stitching on, I just have to finish around the edges with the binding. 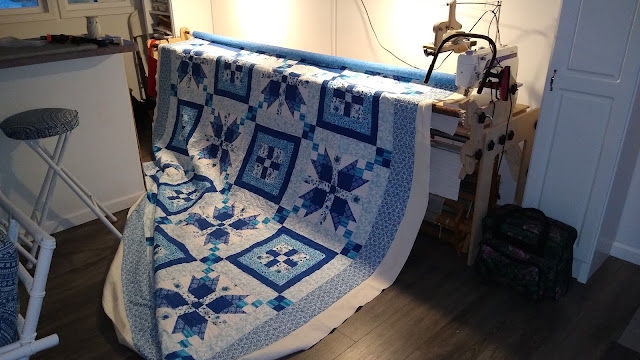 I was a tiny bit short on the blue flannel backing on one end. I looked online, and found the matching fabric at Joanns. Not only was it on sale but they had a discount on shipping too. 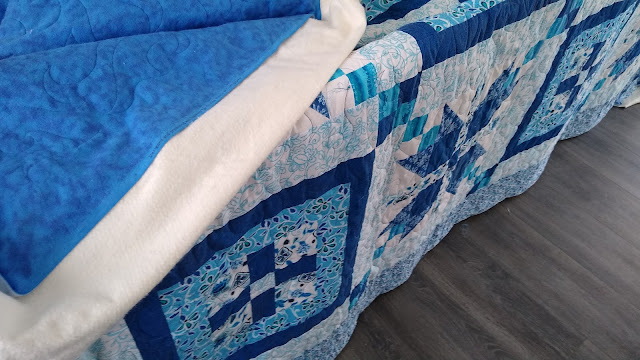 So I was able to order it online and have it delivered to my house. No need to go to the store and fight all those crazy old sewing grannies stocking up on quilting supplies for the upcoming weeks! Lol

Speaking of a crazy sewing granny, remember when I sewed through my finger last week? I'm happy to report that is healing well, but with the nail being cracked I have to keep a Band-Aid over it to keep the nail from snagging on things until it grows out.

Having the Band-Aid on causes me to be more clumsy and trying to do things with the middle finger instead of the pointer finger while quilting.

Sooooo while using my rotary cutter, my middle finger was a little longer than my pointer and got in the way! Yep, I sliced a little bit into my middle finger but stopped in time before I did too much damage. So now I have TWO band-aids adorning my left hand! 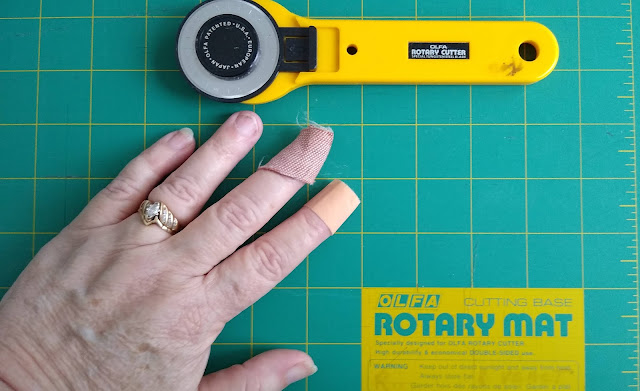 I am working on some pretty multi-patterned red hot pads to go in my newly redecorated farmhouse kitchen.  Working on these until the blue fabric gets here to finish the quilt. 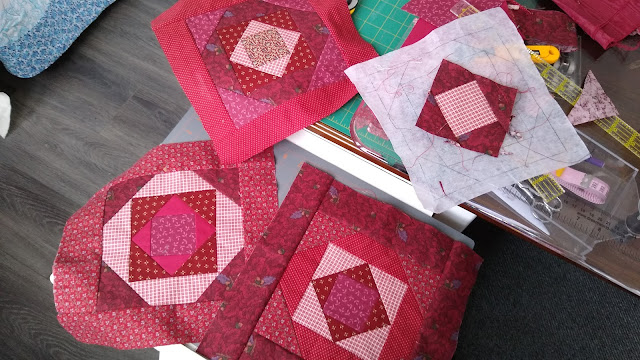 It's supposed to warm up into the forties for the next couple days so that means while I am sewing, it's pleasant enough for Steve to work in the garage when the sun is shining.

Speaking of the sun shining, I read this really interesting article about the 1918 Flu and the results of sunshine and fresh air on soldiers in Boston. There wasn't enough room inside the over crowded hospital, so they had to make them temporary outside hospital rooms in tents. The doctors discovered that the soldiers got better a lot faster when given time out in the sunshine and fresh air.

Coronavirus and the Sun: a Lesson from the 1918 Influenza Pandemic

Mar 10 · 6 min read
Fresh air, sunlight and improvised face masks seemed to work a century ago; and they might help us now.
by Richard Hobday
When new, virulent diseases emerge, such SARS and Covid-19, the race begins to find new vaccines and treatments for those affected. As the current crisis unfolds, governments are enforcing quarantine and isolation, and public gatherings are being discouraged. Health officials took the same approach 100 years ago, when influenza was spreading around the world. The results were mixed. But records from the 1918 pandemic suggest one technique for dealing with influenza — little-known today — was effective. Some hard-won experience from the greatest pandemic in recorded history could help us in the weeks and months ahead.


We did hang the main bird feeder up higher now to keep those pesky deer from knocking it down with their front hooves. We've had a sudden influx of red-winged blackbirds! The dogs were very excited to watch them this morning... 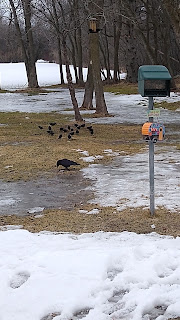 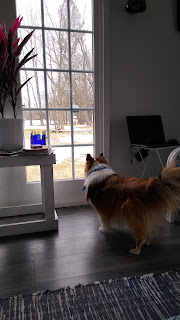 It's so nice to see them back and hear their distintive calls. Also some pairs of mourning doves are hanging around again too, back for the summer.  The dogs are keeping a close eye on them, as well as the squirrels and the big black crows hogging the birdseed. 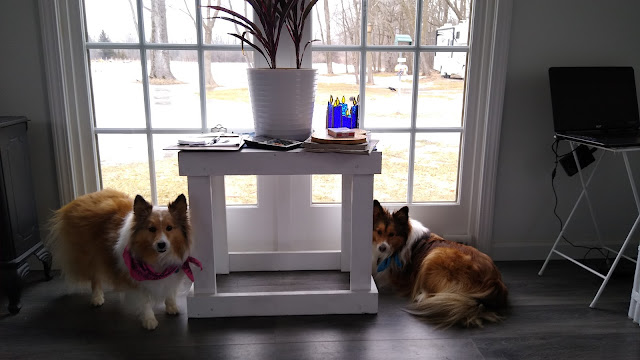 Well, it's time to settle in for an afternoon nap. Now that we are quarantined, I think we can take things easy and not rush around on a Saturday doing stuff.  This might be a nice little vacation?

Posted by KarenInTheWoods at 9:58 AM