My oh my! We went and did it. We broke our self quarantine rule and left the yard!!!

Well, we still didn't have any direct contact with anybody but we had some errands to run.

We had a check to be deposited at the bank. We used the drive-up, wore gloves, and did not even ask for a receipt back. Instead we checked online that the deposit was verified.

We drove to both of our daughters' houses to drop off packages at their doors while they were not home. So we did not see anybody or touch anybody or go inside. It was little variety packages of things for the grandkids, whom we miss dearly, and birthday presents for our youngest daughter Heather.

HAPPY BIRTHDAY HEATHER BEAR! WHEN THIS IS ALL OVER WE ARE GOING TO HAVE A HUGE BACKYARD FAMILY PICNIC PARTY WITH STEAMED CRAB LEGS AND ALL THE FIXIN'S!!!!

From there, we went to the ATM and pulled out some cash. Steve wore gloves and wiped his card off the moment he brought it back into the car. We handled the money with gloves, we sprayed it all liberally with Lysol immediately on both sides and laid it across our dash to dry in the sun. 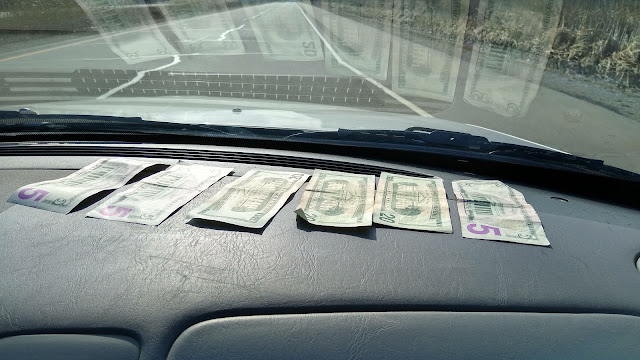 Steve had been in contact with a guy on the Facebook Marketplace. He was selling a brand new unused Liberty sump pump. It was open in the box, but unused with the cord still coiled up, twist tied, and tagged from when it was manufactured.

This model pump runs in the $150 to $160 range, and he was only asking $55. We made arrangements to meet him at a rural vacant parking lot of a closed restaurant. Both parties agreed in advance to social distancing. When we arrived, Steve set the now-dried $55 in bills in an envelope on the bed of his pickup truck staying 10 ft away. The seller than pulled the pump out of the box and showed it to Steve from a distance, including the instruction manual and the packing material. He put it back into the box and we popped the interior release button for our car trunk. The seller placed it into the trunk of our car, took the money, and we both drove on our merry old way.

On our way back, we took a side road and drove out near Geano Beach. The "ice shoves" are coming in. That's when the wind blows strongly from the East as the ice is breaking up on the bay waters of Green Bay and Lake Michigan. The ice chunks are pushed up into great big huge mountains out on the frozen lake surface yet. The ice tumbles over and over makes these huge piles out on the frozen lake... not up on the land.  Very strange formations.  These were only about 20 feet high here at this time. But at other times they had gone even higher. 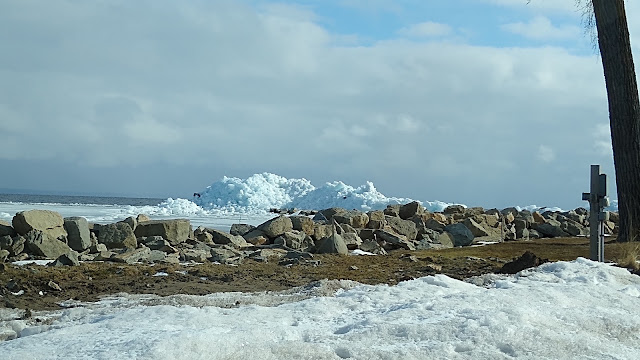 The ice under pressure gets a bluish cast and you can actually hear it going tinkle tinkle tinkle as the ice cracks while the winds drive it in towards shore. By the time we got there, the winds had died down, and this is what remains along the shoreline. 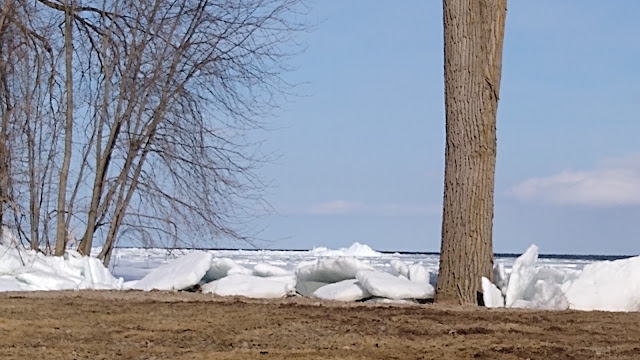 It was good to get out and about a little bit, even though we didn't have any direct contact with anybody other than the 10 ft distance with the seller of the sump pump. I never even left the car.

When we got home, Steve immediately sprayed and wiped it all down, and disposed of the cardboard box. All while wearing gloves. Then he plugged it in and made sure it operated correctly. Which it does. We left positive feedback for the seller. 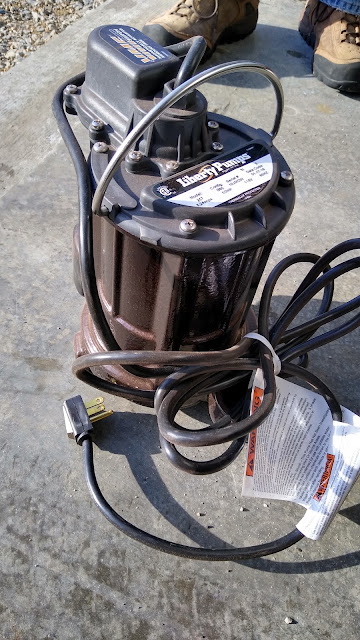 This morning he is down in the basement, installing it already. We had originally thought to purchase it and hang on to it as a backup, in case our pump ever fails.

Instead, Steve decided this one was so nice, more horsepower, and much better than the one we already had. Plus, it is rated as being quieter! He is installing it now into our sump hole pit, and he is going to keep our original pump as a backup. 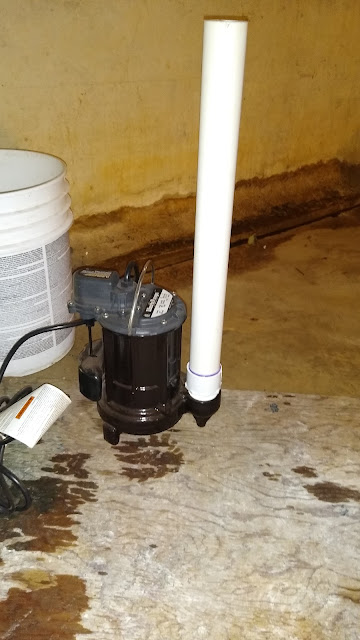 Here he is, hard at work,
as soon as he finished his coffee this morning. 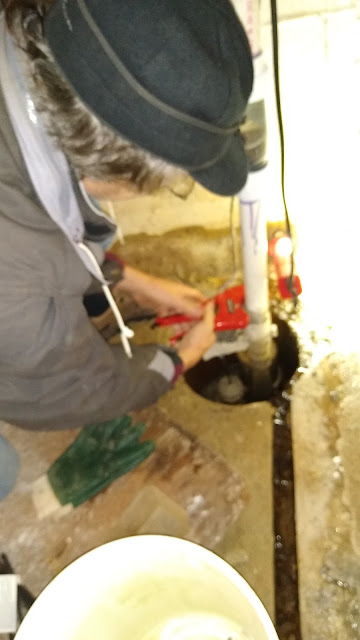 Besides the regular sump pump, last summer, we installed a secondary backup pump that is level with the basement floor. If our basement ever does flood, the secondary pump can also kick and pump directly to the outside in case of an emergency.

We are at a very low elevation and the water table here is very high the last few years.  In the previous history of this home, in 2015, the power had been cut off after the last renters left. This of course made the sump pump inoperable at that time. Water backed up about 2 ft deep into the basement and ruined the entire furnace, air conditioner, and water heater. That happened in 2015 so everything had to be replaced at that time. So we know that our original sump pump is only 5 years old.  It was fine, but now this one is better Steve said.

While he was down there, working on replacing the pump, I also went down there in the basement to pot up another clump of my rooted coleus stems. 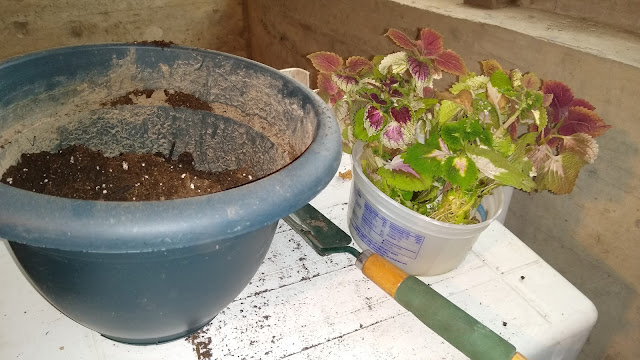 I have been wintering over four large pots of my coleus plants. I dug them up last fall and we put them by these bright large sunny windows that face South in our basement. It's nice to keep the pots in the basement, because I can water them and not worry about over spilling onto the hardwood floors if they were growing upstairs.  As the plants get long and rangy about mid-February, I snip off the longest stems about halfway down. I put the cuttings in jars or clear vases of water in the windows and they grow new roots. Since I've been doing this, I have four more little pots of shorter coleus plants started. 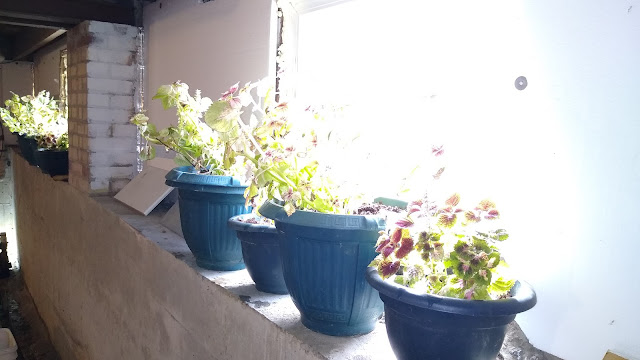 That way, by Spring I will have eight new plants to transplant outside for the 2020 growing season.

I have kept the same plants going or cuttings from them re-rooted, growing since 1989 or 90. I forget exactly when. I got them from my friend Connie way back when I still lived in Green Bay. I have carefully nursed them indoors through every single winter, relying on friends to come and water them when we would take long winter vacations. One year my plants almost didn't make it, and were in pretty sad shape.  But my darling friend Juanita kept 5 big pots of my plants growing at her house. I was able to pick them up from her in the early spring and restock my own dwindling supply. I have passed on these plants to other family and friends over the years. Mom keeps a batch going down in Florida year-round outside, and only covers them up when they get frost warnings.

On the sewing front:

I have two panels of
these cute cut-out
Easter Bunny Families to sew. 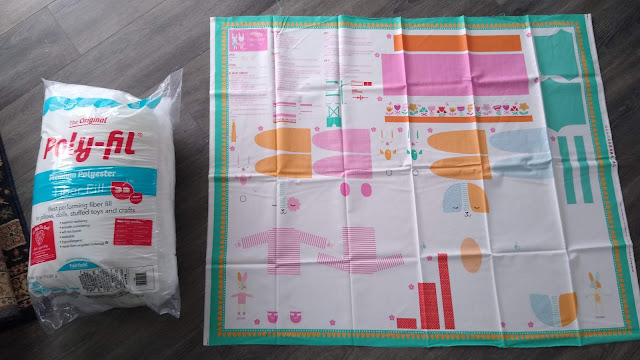 I carefully cut out all of the figures and sent one set over to granddaughter Chelsea to sew on with her new sewing machine. I kept the other panel for myself. Next week, her brother Clayton can hold the FaceTime camera phone aimed at the sewing machine while she sews each piece. I will sew the same pieces here, simultaneously. That way I can give her on the spot sewing help as she sews while I work on the exact same thing at the same time at my house! 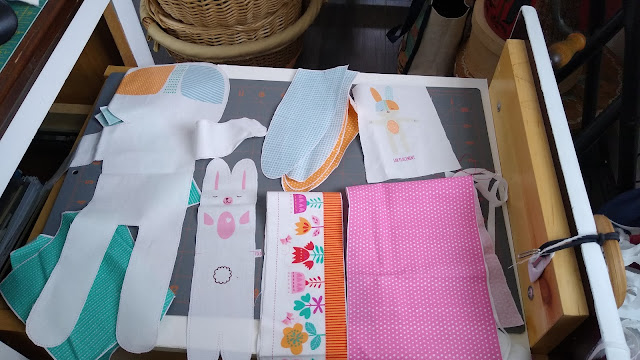 With Clayton being the camera man, it will include him in the activity so he doesn't feel left out.


When they are done,
they will look like this: 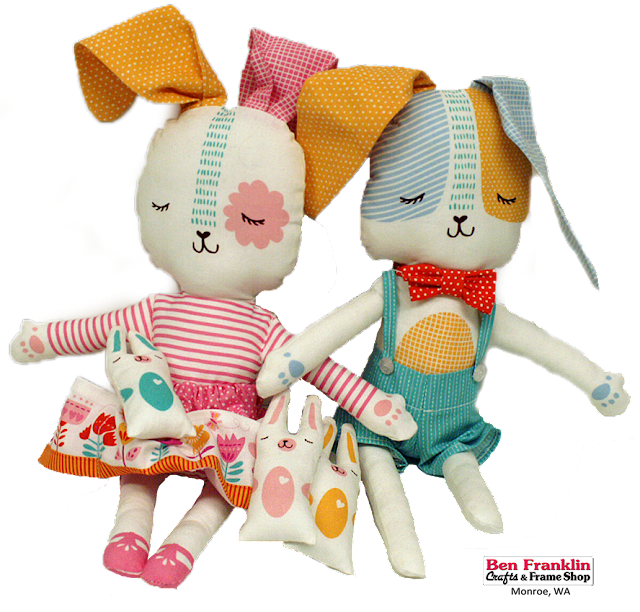 Well, it's 10:30 now. Steve is done with replacing the sump pump. He will come in and get cleaned up and I will get some breakfast Sunday brunch going.

Posted by KarenInTheWoods at 11:22 AM