Fan Fun with Ductwork in Our Old House

Before I start today's blog, I would like to give a big shout-out to our son Dan and his wife Heather on their 10th anniversary! They are the parents to our two wonderful grandchildren Allegra and Mason. We wish them a happy anniversary and hope they have a wonderful and exciting year ahead of camping and baseball and family events. 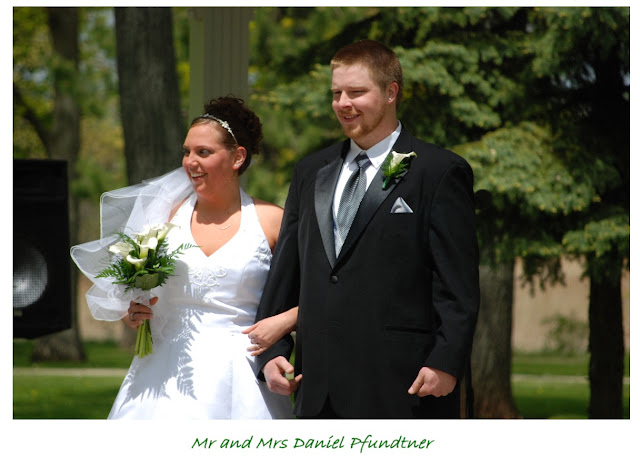 Okay, now on to my blog topic of the day.

Did you know that every time you have a 90-degree turn in your household heating or air conditioning ductwork, it can decrease your air flow by 33%?

Our ductwork run that goes up to the second story in our master bedroom (and my sewing room), has THREE 90 degree turns. That means there's almost no air moving through that vent, even when the furnace or the central air conditioner is running. It's very weak compared to the other ductwork in the house.  We have tried turn down the air flow with the dampers in the other ducts somewhat, but that doesn't increase it up the one run to the master bedroom.  Ironically, that is also the longest and farthest run from the furnace blower.

We don't notice it as much in the winter months, because heat rises up the stairwell in into our bedroom and we are quite comfortable. We turn down the heat at night to 50 degrees, and use an electric mattress pad heater. So no problem with the winter months.

But in the summer months it's really hard to get the cool central air up into our bedroom. Especially in the evening and night during hot humid weather. The main floor is still cool from the air conditioning running all day which is where the thermostat is located. We just don't get enough cool air movement pushing up into our bedroom.

We have tried various fixes over the last five years:

First, we put a ceiling fan in the bedroom.  It moves the air, but it's HOT air. Compounded by the fact we don't have any cold returns on the second floor at all. The cool air from downstairs just doesn't get up to the second story too well.

Next, we put a window air conditioning unit up there to supplement the central air. Not only was it noisy but I didn't like the look of it on the outside front of the house. It only cooled the bedroom and we had to keep the door shut to the rest of the upstairs.  We had to fire it up about an hour before bedtime to cool off the room. And --- the rest of the upstairs is still hot and uncomfortable.

The third solution was to add a supplementary fan to our attic scuttle hole to help suck some of the hot air from along the ceiling out of the second story. Beyond that, in the attic we installed an attic vent fan to help expel it to the outside through the gable end grid. Although that helps some, it's still was not addressing the issue of not enough air blowing up through that duct to begin with.

So we went on now to our newest solution and I think this one is a winner!

I read about these supplementary electric duct fans, and although Steve pooh-poohed my idea from the get-go, I persevered. I showed him plenty of information about how that duct to our master bedroom and sewing room is severely hampered because of the three 90 degree turns. There just isn't enough flow of air.

He finally went along with my idea, after living here for 5 years with insufficient air conditioning going up to our bedroom.  YAY! by boosting the air flow to the upper floor, both of our open stairwells to the main floor will act as cold air returns.

So we went to Menards and invested $28 for a duct fan booster unit and $22 for the supplementary pressure switch control box, I am willing to try for $50 to make a difference!!!

He had looked at the size of our duct downstairs and first thought it was 6in. So we bought the unit for a 6in.. We got home and realized, nope, the ductwork is bigger. So we went back and got the fan for the 8in. duct work. We came home and oops, again, wrong size, that one's too big!

Three times a charm! We went back and bought a unit that was adjustable between a 6 inch 7 inch or 8 inch ductwork. 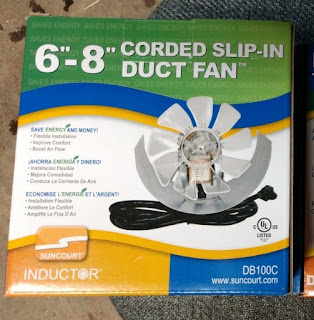 This can be installed and run continuously 24 hrs. a day.  But..... we would rather it kicks on and off with the central air when it blows.  Hmmmmmm

So they make this other piece to go along with it. It is a temperature sensitive switch controller unit. After the fan is inserted into the ductwork, you drill a hole about the size of a half-dollar into the ductwork and mount this box to it. As the furnace or AC blower air passes over that hole, it activates a switch that turns on the supplementary duct fan. Set it for cooling or heating and there is a dial to control the amount of time the fan runs with a high and low limit. 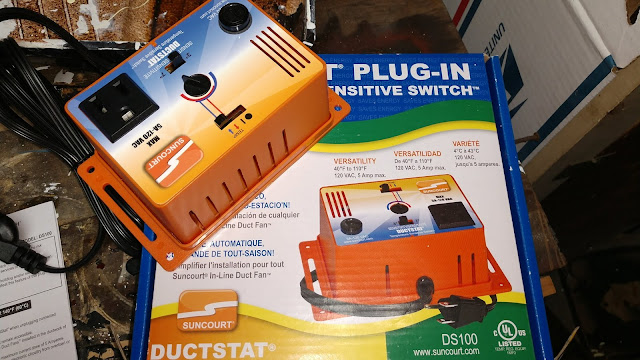 Now to start the installation:  here is the duct fan unit with a half circle of ductwork. That makes it adjustable from 6" to 8", of which we have 7". 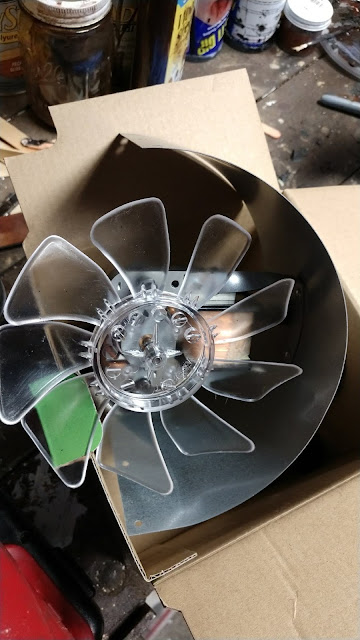 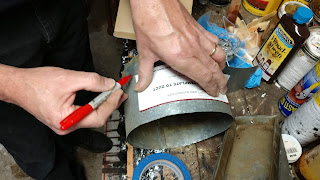 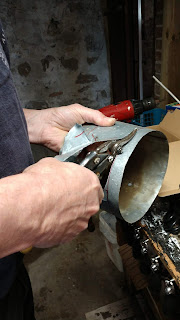 The is the first of three 90 degree angles of ductwork to our bedroom.  The other two are enclosed in the walls and floor between the first and second stories.  The duct transitions from a 7" circle to a 14" wide rectangle to boot.  This is the best place to insert the new duct fan, as it is close to an electrical outlet in the basement. 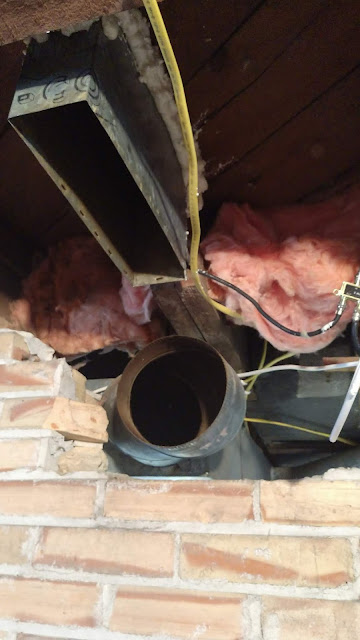 Before Steve reassembled the ductwork back into place, he decided to vacuum out the duct with the shop vac. It wasn't too dirty, but he since he had it apart, he might as well do it at the same time. 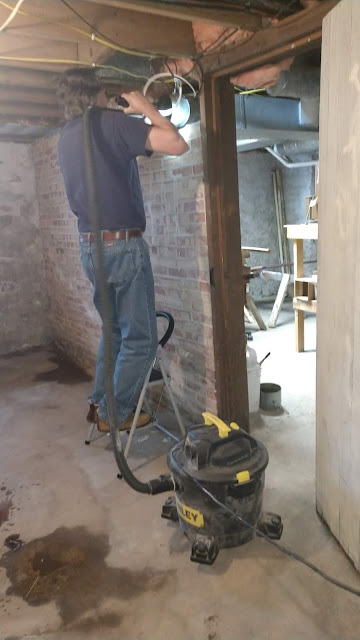 He reassembled the duct work into place,
now with a rectangular hole cut into the side.


Using real "duct tape" he sealed off any corrugated areas that also leak air flow. The new fan slides right in and four self-tapping sheet metal screws hold it securely into place. He sealed it around the edges with more duct tape as well. 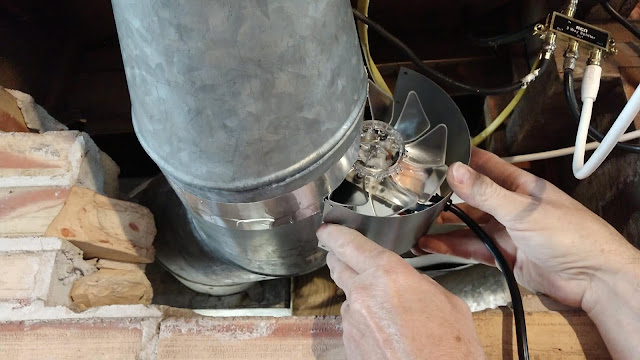 Now to add the temperature pressure switch to the duct, it has to be on the far side after the fan and furnace, not before it.  He only needed to drill a half-dollar sized hole in to the duct with a hole saw.  The orange box needs to be screwed tight to the duct and they recommend either some sponge gasket tape or a circle of caulk (non-hardening) to seal from the flat surface of the orange box to the round surface of the duct exterior.   He installed it tight and screwed it into place and plugged it all in. 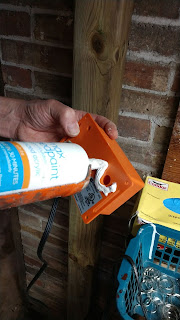 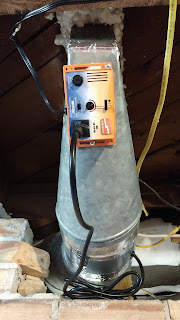 We followed the instructions and set the low and high limits and turned on our AC central unit to test it out. 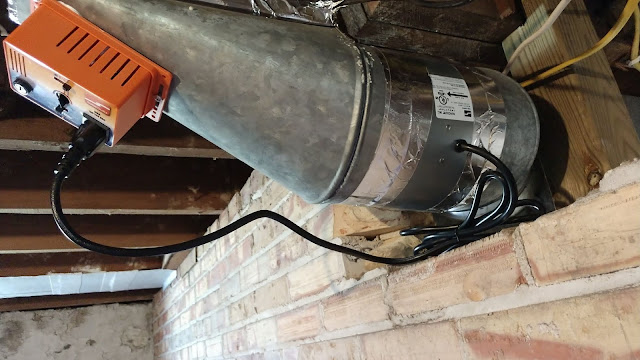 WHEEEEEEEE!!!
We now have
a nice strong noticeable blast of cold air
coming up into our master bedroom!!!!!

It is getting up in the mid 80's today and humid, so it's a great to test it all out.  We closed up the house and pulled the shades for added comfort, as well as slid down the storm windows over the screens on all of the windows for more insulation layers.  It's been 2 hours and the upstairs is nice and cool in the bedroom at 70 degrees,

By George, I think we got it!


This morning, before it got too hot and humid, Steve and I went out to dig up some hostas.  Steve's brother Pete and wife Cindy built a new house. They are working on landscaping now, and would like any and all perennials we can split and share.  My hostas have gotten too large for their areas over the last five years, so they needed thinning out and splitting. 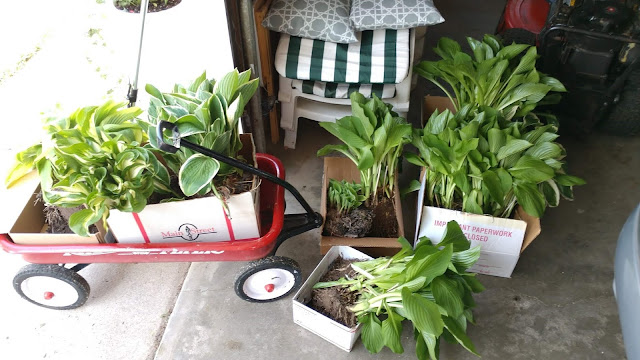 We dug up 10 huge clumps of various types,
and most of those can be split two or three times more.

I am running up to Menasha later today, so we loaded them into the car trunk and keeping them in the cool of the garage until I am ready to leave. They will have a busy memorial weekend getting them situated and planted in their new yard. 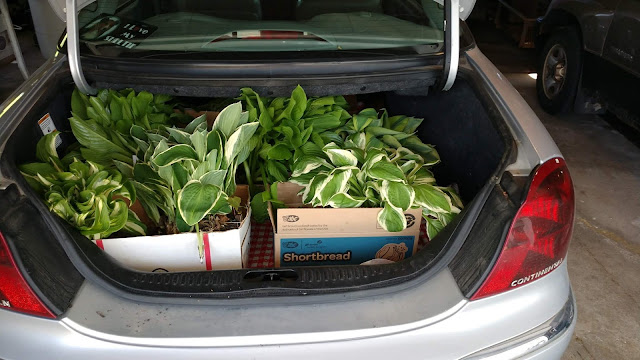 On edit---- it's now after 8 p.m. I'm very pleased to say that the downstairs temperature is 72 and the upstairs temperature is only 74! Usually there is a 10 degree difference between the downstairs and the upstairs. So it appears this supplemental Duct Fan is really doing its job to circulate the air throughout the house and get the cool air upstairs where it's needed the most. $50 well spent!!!
Posted by KarenInTheWoods at 12:27 PM