CAMPING VACATION - Day 7 - The Nice Guys and the Sinkhole!

This Dubay Campground in the Portage County Park System (Wisconsin)  is very nice --- and we slept quietly through the night. It was wonderful to pull up the windshield shade and see the beautiful view of the lake out in front of us. It did get cool during the night, and even the heater kicked on a couple times. 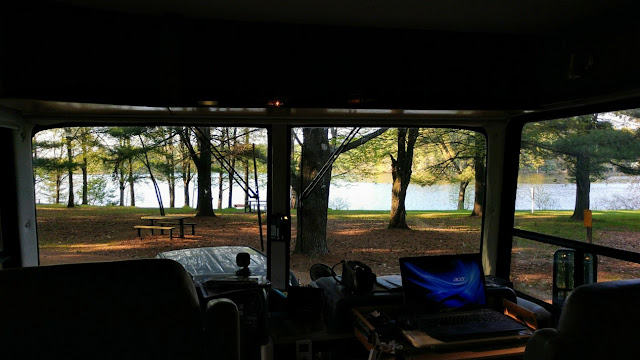 The weathermen were wrong again! Now they said it's NOT going to get up into the mid-80s for the next few days. Instead it's going to be in the low 70s. Now go figure for that!

I baked a cinnamon swirl coffee cake for breakfast and spent the morning sewing. Steve puttered around with a little of this and a little of that. It was very relaxing and we figured we would just spend the day messing around or walking the dogs. 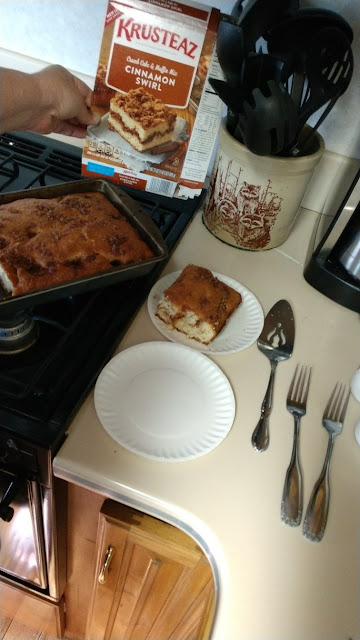 Really, our whole reason for coming to this campground was so we could plug in and run the air conditioning. It was supposed to be in the id 80's.  It's a very nice place and I'm glad we came.

Actually, before 10 a.m. we paid for another night!


About noon, we saw a big fifth wheel pull in and move into a site three spots away from us. The nice couple came out and approached us at our campsite. It turns out that they had reserved all four campsites in that row for Friday and Saturday night. They had come early on Thursday as well as one of the other couples was going to be there on Thursday. So those two sites were already reserved for Thursday night. and the other two sites not until Friday night.  (one of which we were on)  But now it turns out, the other two couples who were joining them, were able to come already on Thursday instead of Friday!!

That posed a predicament, because we had already paid for Thursday. They understood that after they talked to us, that we had already paid and it is self-registration and it was in an evelope in the  the self-pay post.  They were hoping we were leaving today and not paid for another night.

They said that was okay, they just would tell their friends that when they came they would have to spend the night in the flat parking lot nearby, and not unhook, and wait for us to leave on Friday.

Steve and I discussed it, and decided that not only would it not be fun for them to not have all four couples together, we would kind of be in the middle of their Gathering.

So being the "Good Guys" that we are, we walked back over to their site and suggested that if they wanted their friends to have the site for tonight already, just pay us back the $24 and we will move on to the next campground on our list that we had already considered trying out. (It was only 19 miles away).

They gratefully jumped at our offer! Now they could call back their friends who had figured they would be spending the night in a parking lot. We chatted for awhile about places we like to go, campgrounds we like to stay at, and had a lot of nice things in common. They were grateful, and we didn't feel bad about giving up our site to them.

Their friends weren't due to come in until after 5 p.m. so we did not have to rush to pack up. We really only need about 20 minutes to get roadworthy, and then hook up the Tracker and leave. We gave them a good honk honk of the big air horns and waved to them as we headed on out. They waved back with big grins on their faces.

Sometimes it's nice to do nice things...


We drove on over to Jordan Lake, another county park within the same district as Dubay Lake. Even the price is the same for the campsite that we picked out. So the $24 they gave us went right back into an envelope for the new campsite at this campground.

We chose site 13 which was around to the back of the loop, and there's nobody else around. Well, except us and some mosquitoes!! There are more mosquitoes here than there were at any of the campgrounds we have been during the last 7 days. I think they were waiting for us? 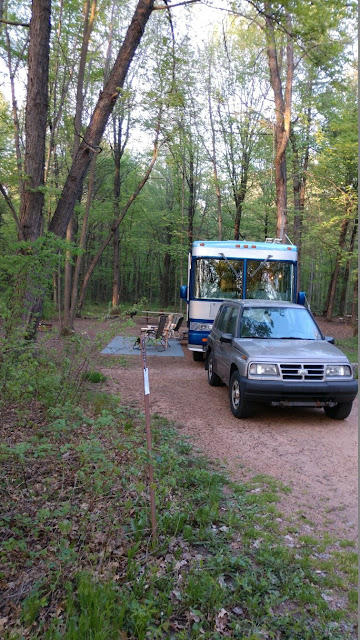 We had seen a couple rummage sale signs on the way to the park, so after we unhooked the tracker we backtracked a little bit and nosed around. Didn't find too much of anything other than a big Nesco roaster for $5. I already have one, but maybe one of our daughters or son needs one. Or it's nice to have an extra for large family gatherings.


I made up a pan of tater tot casserole for supper, and also did some sewing on my quilt squares. 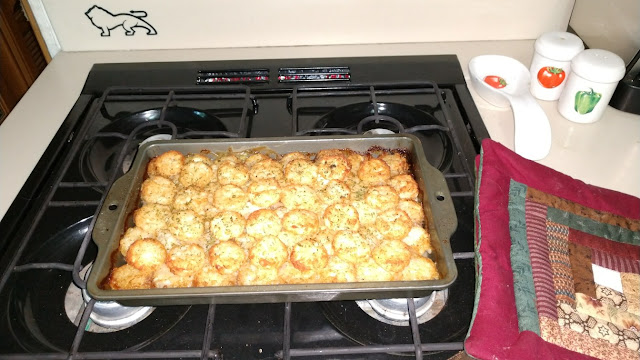 This is a long chain of pieced together 4 patches.
I set up the sewing machine inside on the kitchen table. 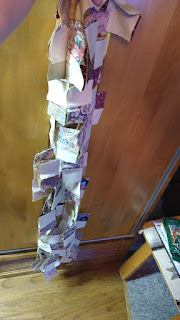 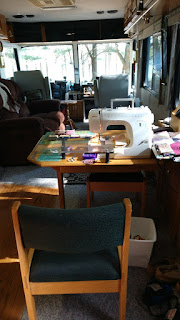 We decided to take one last walk around the loop with the dogs for the evening. As we came back to the motorhome Steve happened to glance underneath at the front leveler. (we have 3 levelers on our rig, two in the back and one in the center of the front two tires, like a tripod.)

He always puts the levelers on these big 12 x 12 planks. It's a wider surface than just the leveler footprint itself. 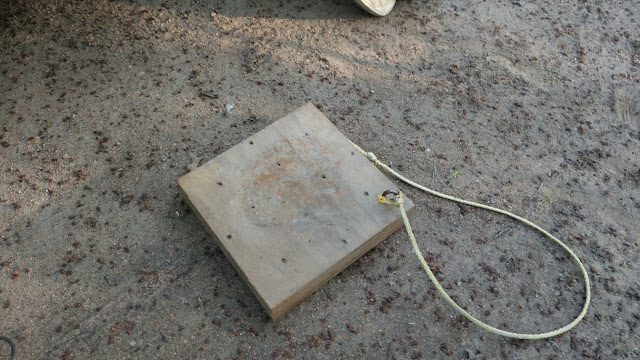 Here is a pic of one of our rear levelers so you can see just how large the plank is... 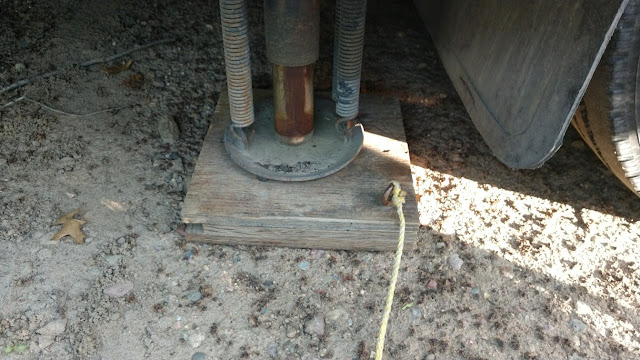 As I was saying....  we were coming back from our walk, and Steve glanced underneath the front of our rig.

He took one look and said "WHAT THE HECK?!!" Our whole leveler base and the 12 inch plank were gone from view down into a sinkhole!!!! I kid you not, they were gone down in at least 12 inches underground!!!!

Steve tried to retract the leveler, and it was hung up with the plank wedged in the hole on an angle. By using a crowbar as leverage and another two planks as a fulcrum, he was able to guide the leveler back up while I held the button in retract mode. Then he was able to crawl under and dig out our plank. Good thing we have retrieval ropes on them tied to an eyelet. (See in the pic above). The ropes are actually to help pull them out without having to get on your knees or get dirty especially if it's a rainy day when you're pulling up camp.  He was able to pull it out of the hole with the rope. 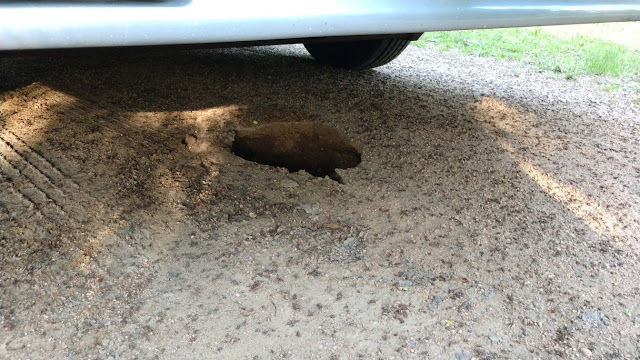 The two front tires seem to be on firm ground. It's just that one area in the middle that seems to be soft. Probably with all the rain that they've had lately, an area underneath washed away and made a small sinkhole.  We hope it's small.


If we are not here in the morning, and if somebody on the news said a big blue 1996 Safari motorhome fell down in a hole, then you know where we went. 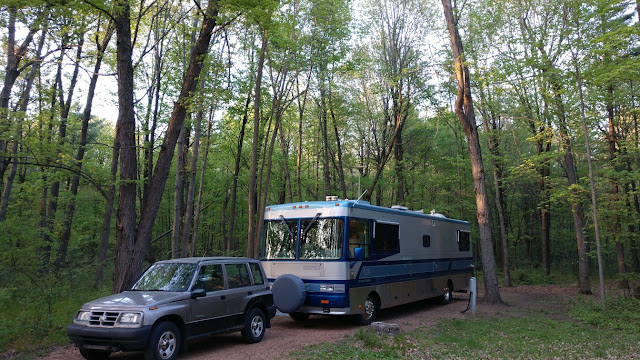 Posted by KarenInTheWoods at 9:56 PM