When we viewed our house to purchase it back in 2012, we noticed odds and ends of scrap wood up in the attic of the garage. We asked the sellers if they wouldn't mind leaving it there because some of it might be usable in the future. It's funny, because five and a half years later they said they didn't know half of the things left in that attic and they really didn't want to go through it anyhow!! Lol!

Steve had it in his mind to build some window boxes to dress up the front and the south side of the house. We kinda looked at picking up some wood at Menards but that would mean going out in the heat, hooking up the trailer, and driving 30 miles to get wood. Instead, we shopped in our own attic of our own garage! Recycling at it's finest.

Just look at that up there, should be something we could use to build window boxes with, you would think? 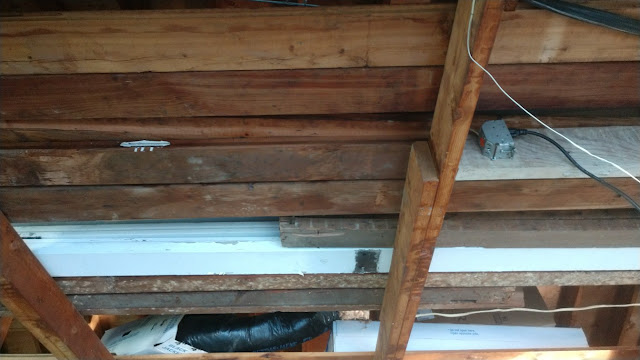 Sure enough, Steve found some interesting pieces of wood that would work. They actually had little grooves cut along the edges, known as "shiplap". If anybody watches the show on HGTV Fixer Upper, this is the stuff that Joanna absolutely loves!

Well, this wasn't going on the walls, this is going into making the window boxes.

Steve carefully measured and cut and got all of the pieces ready yesterday afternoon. It was way too hot to do any more work out in the garage as the temps were climbing.  But he had a plan in mind.

This morning he decided to get out there early and do what he could to get these put together. We started about 6:30 a.m. Before the temps climbed up the thermometer.  It was humid, but still in the 70's so we could work out there in the shade.

Just look at that guy. You know, on the PBS TV show The Red Green Show, he says if your woman can't find you handsome, she might as well find you handy! 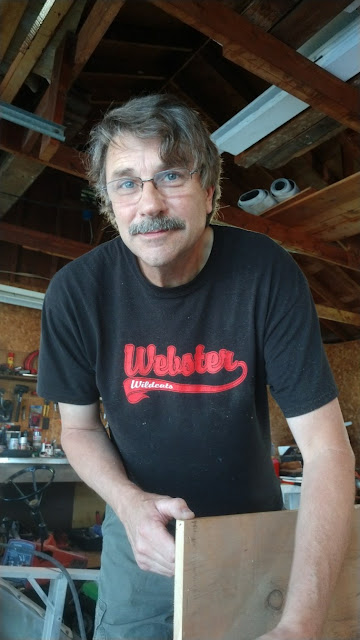 Well, I think Steve is BOTH handsome and handy!!!

We started to work on the boxes with the garage door open for fresh air.  The mosquitos were biting, but not as bad as they were the evening before.  He had it already figured out what to do, and I was there to hold things and hand him tools, screws, the caulk gun or his coffee cup.  That's my job. 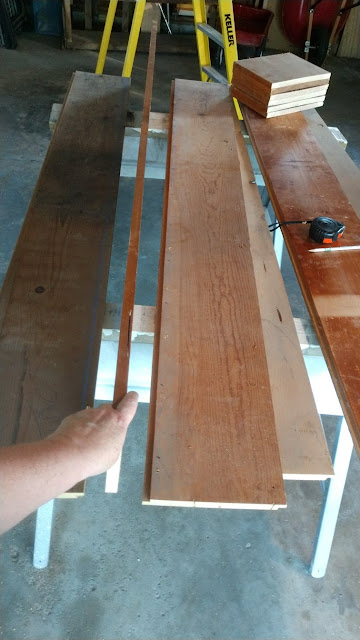 He carefully sealed all of the seams with a caulk adhesive before he put the boxes together. The front surface he nailed on with the air gun to hide the fasteners, but the rest of the box was constructed with heavy duty coated deck screws on the sides, back and bottom. 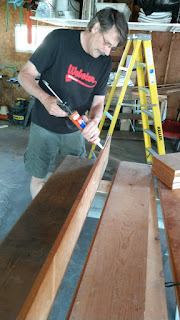 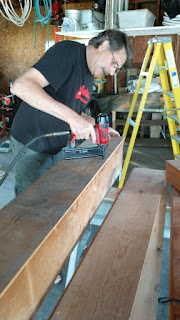 Although the garage was getting warmer, I held the pieces while he assembled the boxes.
I'm not good with heat nor humidity so I could tell the morning was really going to be rough as the temperature kept increasing into the 80s. 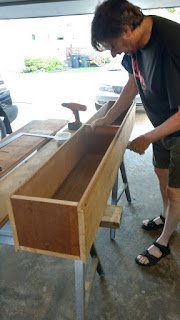 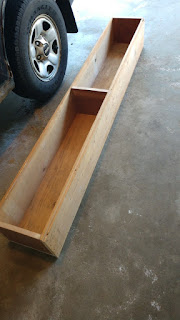 Soon, the Construction Master took a break and supervised me from his lawn chair. I got out my brush, roller, tray and can of blue trim solid colored stain for the front and sides of the box. I rolled two coats quickly and went back in the house to cool off in between coats. 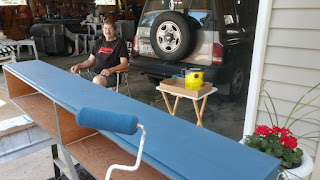 Steve helped me flip them over on the saw horses and then I could coat the bottoms and the back sides and the insides with a special rubbery paint for wet basements called Dry Lock to preserve the wood on the inside. 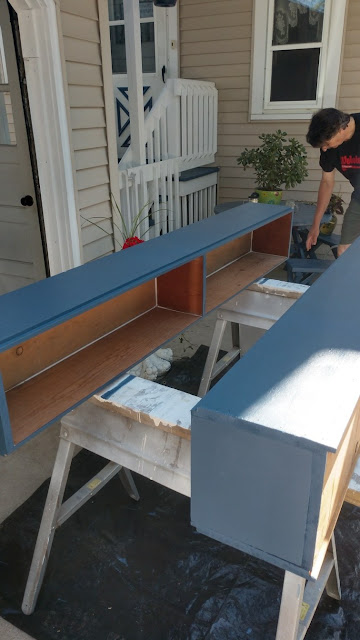 Steve will drill the drainage holes on the bottom and add screening over the holes, once we are sure where the brackets are going to be located that hold them up to the house.  We will have to measure for the studs first and then center the boxes.

We were done by mid morning and we escaped back into the house into the cool central air conditioning. The temps were climbing and climbing outside. We had planned to go to my friend Connie's birthday party in in Oshkosh for noon. But there is no way I could deal with that heat and humidity for an outdoor party for the afternoon. So we gave her a call and said we would stay home today and get together on another day to celebrate her birthday.  Sorry Connie---- 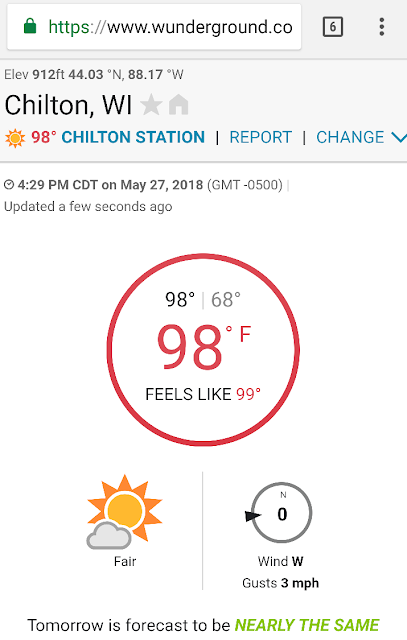 Once it cools down next week, we get the window boxes mounted, I'm still debating what I want to plant inside of them. I am thinking it would be nice to do just blue and white petunias. But then I thought just all over crazy colors of just about every flower--- because I planted all different colors of gerbera daisies down below by the Dutch Boy and Girl? Or I could put in red geraniums and ivy like I have in the pots on the front stoop. 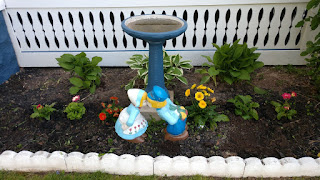 I know the bottom couple inches will be shredded up styrofoam and packing peanuts so they can drain but not be as heavy as pea gravel. Then I am going to use some of that lightweight Moisture Control potting soil meant to retain the water designed for window boxes and hanging baskets.

Playing with Photoshop, I drew a blue box on both the front and the side of the house where the window boxes will go. I also drew some blue trim that I want to add to the soffits and eaves.  Also with Photoshop I did a copy and paste of the design of the fretwork cutouts underneath our front porch. Then I pasted them as shutters up on each side of the windows to see what that looks like. 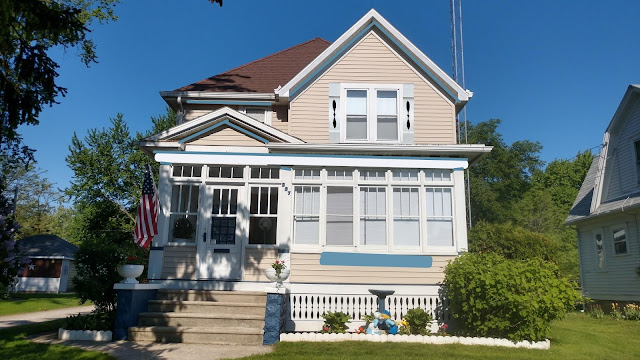 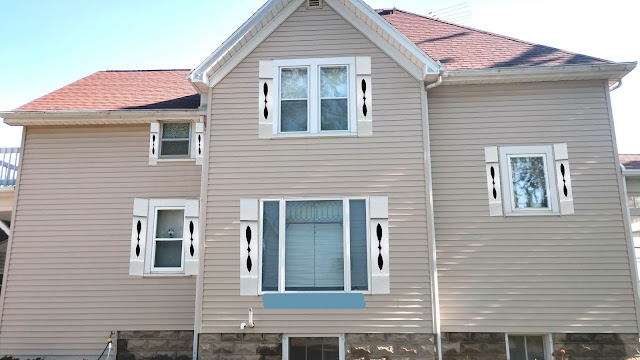 Steve seems to think that's a really good way to dress up the house as well. So we might be cutting out shutters in the next couple weeks. Stay tuned!

Even though we were inside the house and it's relatively cool, I didn't want to heat it up with cooking anything for supper. Who does?

Even in our small town of Chilton, we are lucky to have a little Chinese restaurant called King Wok. I called up and ordered our favorite meals to share and Steve ran over to pick them up. Easy peasy supper. 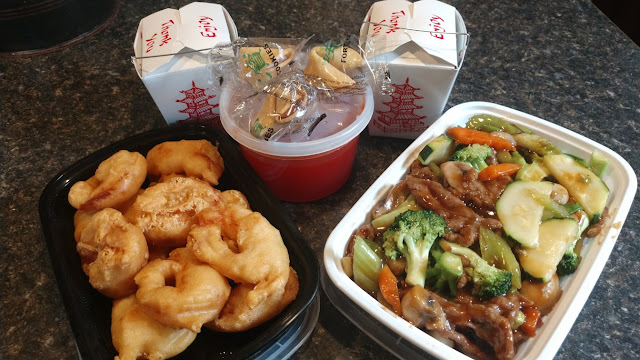 I am pleased to say that the modification that Steve made to our ductwork has been working out tremendously great!  (I wrote about it in the last blog)  We now finally have cool air reaching the second story and the house feels drier and less humid as well.  It is comfortable sleeping in our master bedroom, and the whole second story is only about 2 degrees warmer (74) than the first floor (72). Before his adaptation, it ran 10 to 15 degrees hotter up there, even with the central air running.  So the in duct supplementary fan is really making a difference.

Although, in my sewing room if I have the iron on, it gets a bit warmer.  So he did put the window air conditioner in there for me. It's only hanging out on the north side, not in the hot sun, so it doesn't have to work so hard to cool things down.  I don't care for the look of window air conditioners hanging out on the house, but this is far back on the north side out of view.  It really helps! 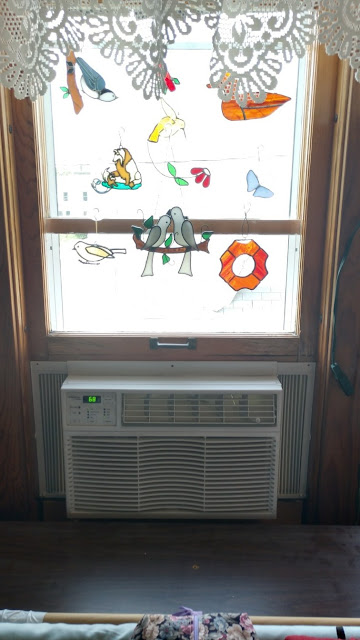 So I hid out here for a couple hours this afternoon,
and then we took a nap! 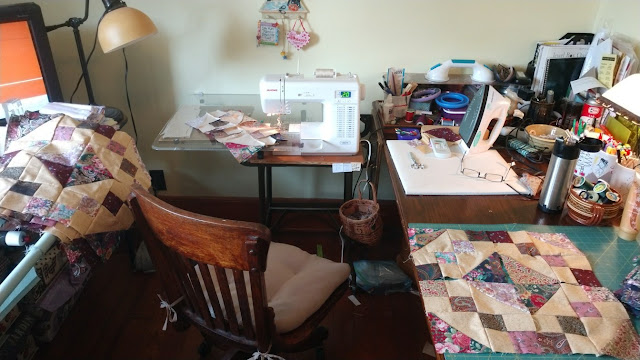 If the weather man is correct,
tomorrow is going to be
just as miserable as today. 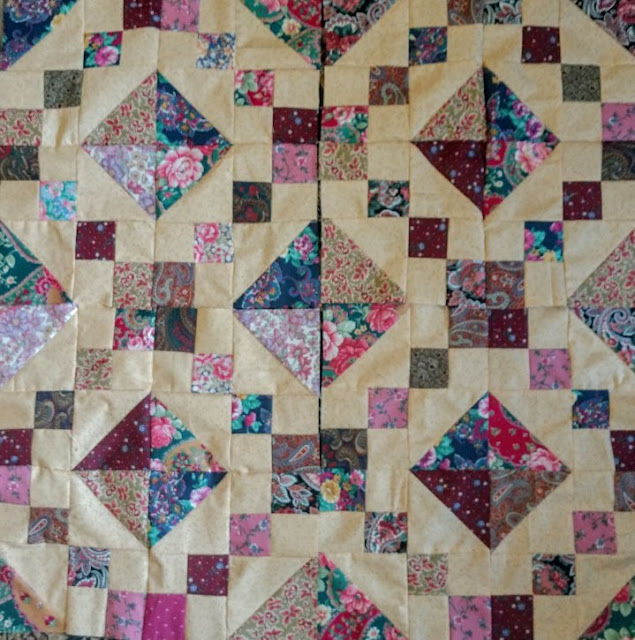 I think I'm just going to stay upstairs and keep working on my quilt!!!

Posted by KarenInTheWoods at 10:25 PM