As most of you readers know, we have been in this quaint old house now for four years. We fondly refer to it as Our Old House (re: This Old House on PBS).  We love the house for all of its well-built sturdiness, original woodwork and classic Craftsman style.  It is 103 years old and we do not want to remodel it, we just keep making it better while retaining its original style.

The wide open doorway between the dining room and my Loom Room never had any type of doors on it. I can see a few marks on the wood frame where a curtain rod might have hung across the opening at one time.  Since I keep a lot of messy fibery work in that room, I wanted a way to close it off. Between looms, spinning wheels, sockknitting machines and sewing machines, Steve and I decided to figure out a way to close it off. This was shortly after buying the house in 2012.

Steve found these great french doors on Craigslist. They were from an old church that was being remodeled.  We snapped them up for $75.  Great deal! 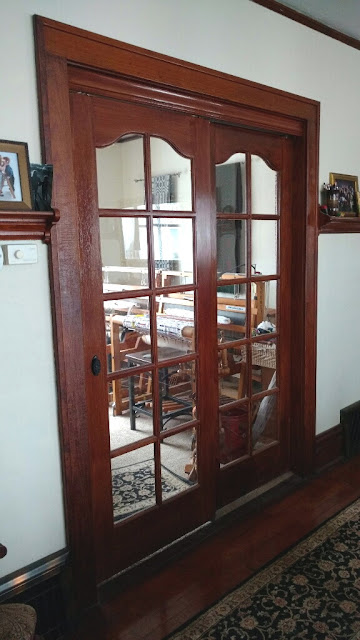 We added tracks from a heavy duty closet door slide mechanism and a top wooden strip to cover the sliders and rails. I stained them to match and we added some little cast iron drawer pulls as handles.

Now we could close off my fibery tools from inquisitive little grandtot hands, or closing off my clutter from the rest of the house.  At one time I had even considered mounting some type of sheer curtain on thin rods or springs to block the visual path into that room. But with the sliding doors passing each other in close range, that did not lead to any easy hardware to mount some curtains.  I just kinda let it go.

Friday I saw this bolt of lace being sold on the local Facebook Buy Sell Trade page.  I contacted the seller and made arrangements to pick it up.  I bought the whole bolt.... about 20 yards of this lace fabric that is well suited for my Loom Room.  I have never seen lace like this anywhere so I snapped it up! 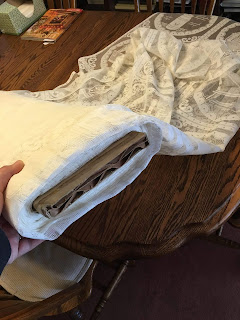 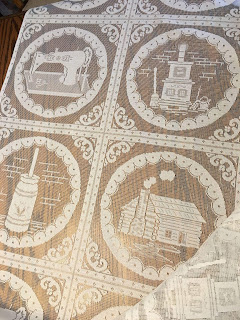 What PERFECT FABRIC for me!!!
I have an old treadle sewing machine,
I have three spinning wheels,
I used to live in a log home,
I love to cook so the cookstove is fitting
and I am from Wisconsin so that means butter!~   LOL 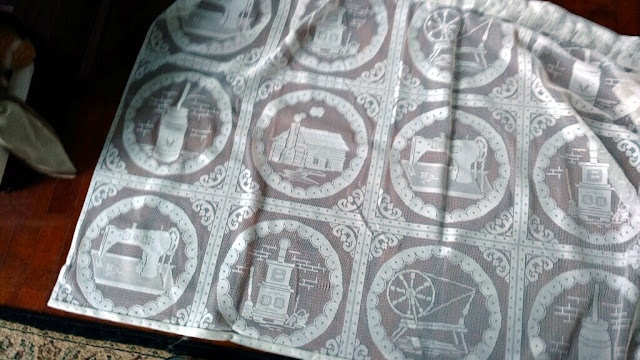 Now... most of you probably think
that I am going to sew some curtains, right?
Wrong!

I saw this technique a while back on Facebook and saved the link:
http://www.littlethings.com/lace-window-treatment/

Yup... I am going to cut out panels of lace the exact size of each pane of glass on the french doors.  By using the simple cornstarch and water solution in the instructions shared above, I will adhere the lace to each section of glass.  If I tire of it or do not like the outcome, I can just wash it off with warm water to remove it.

I carefully cut 4 pieces of each of the 5 different motifs --- I have 20 total panes on the french doors. I starched each one to stiffen them up to make them easier to work with. 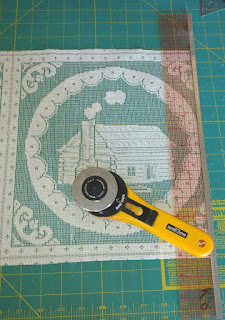 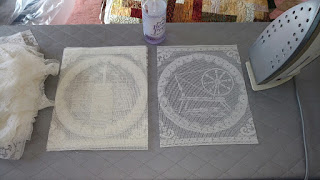 Now it was time to mix up the recipe.. this was amazing!

Now, in a separate container (I suggest a large 4 cup pyrex mixing cup) you heat up 1 and a half cups of water until boiling!   I used the microwave about 4 minutes.

Pour the liquidy milky stuff into the boiling water and it instantly makes a thick gel!  Like soft pudding!   Amazing!!! 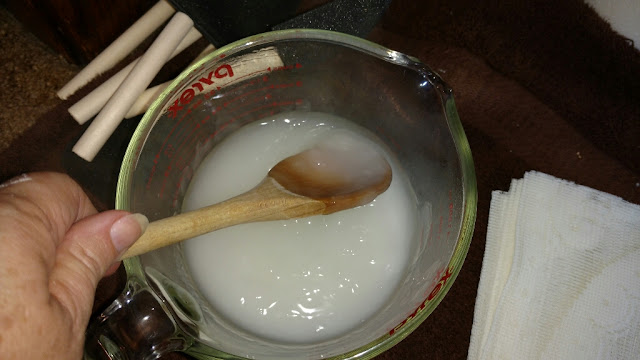 In the instructions on that link, she used a bristle brush to apply the gelatinous solution to the glass. Sometimes those type of brushes lose bristles. Instead, I chose foam brushes.  I covered the flooring underneath with a thick towel to catch drips, and I had a roll of papertowels at the standby in case I needed them.


As I started to brush on the gel,
a certain someone wanted to see what I was doing.... 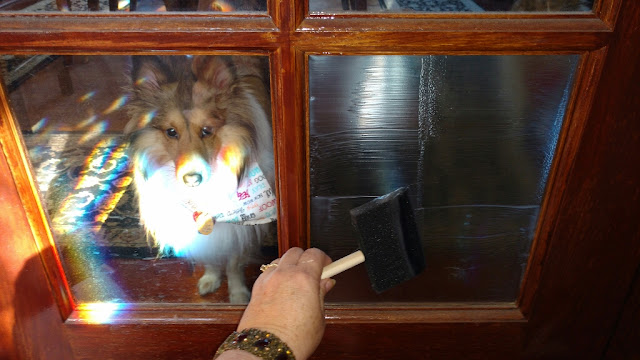 All of the rainbows you see in these pics are from the leaded glass window behind me.

Wow! This was really easy!
It was not messy and I worked one pane of glass at a time.

I would say to be sure your lace is cut to the exact size,
because once it is on the glass, you really can not trim it at all. 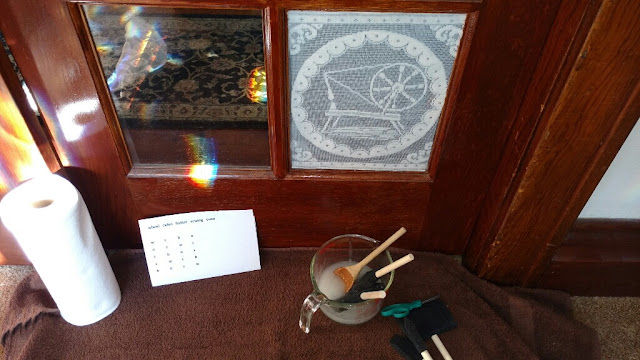 I made a little pre-planned diagram of which block to put where. Then I would not end up with any two blocks of the same motif next to each other. Also I flipped some blocks reversed so not all the cabins were the same way or all the sewing machines or the spinning wheels. 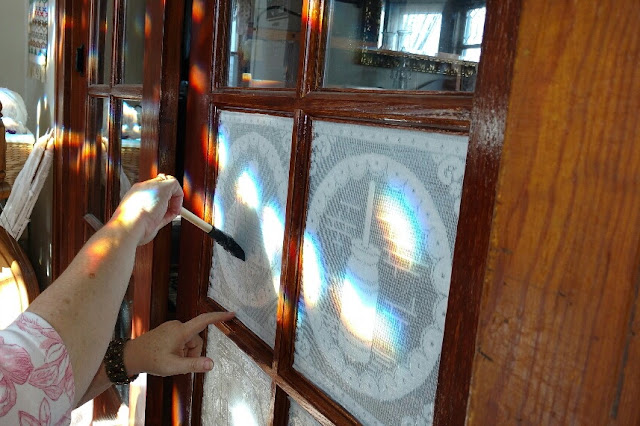 I found that once I set the fabric flat on the window, I could easily press it into place on the thick gel. I could hold it in place on the bottom edge with my fingernail while brushing upwards with more of the gel on the top of fabric.  The gel is warm, so you have to work kinda fast to keep it thin enough to brush over the lace.


That is enough to do about five of the window panes. (mine were about 9x12)


Then go back and make a new batch for the next five panes. 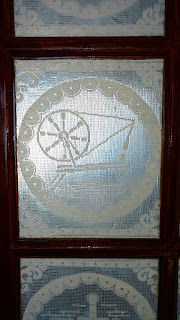 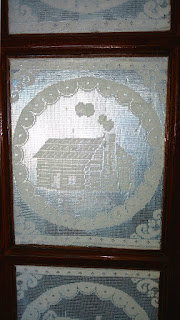 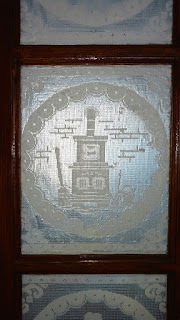 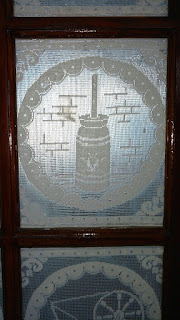 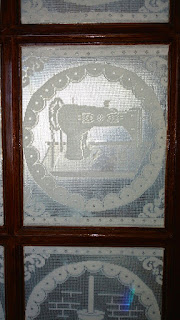 I spent about an hour or so doing the application process.
I made a little template to pre-cut the curve
just right for the top four blocks.

Easy clean up with water,
and toss the brushes away.

Now I stood back to admire my work: 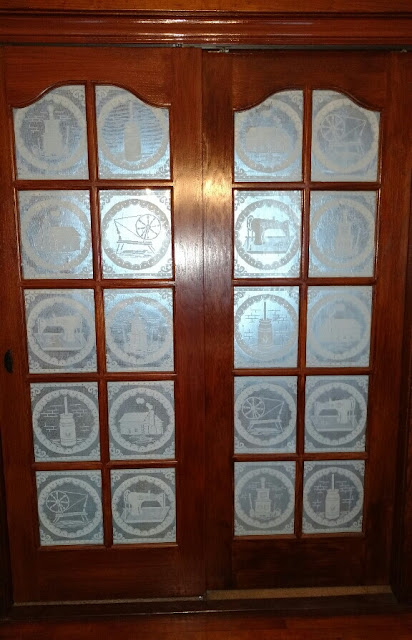 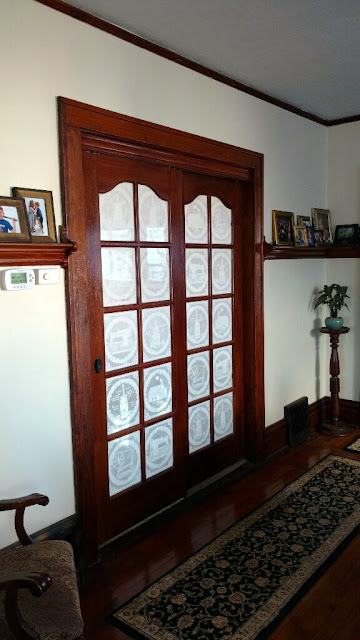 It is still drying as I took these pics.
As it dries, it gets more translucent.
I love it!!!

Now.. for the extra lace.  I have looked all over the internet to see who sells lace like this. I can not find it anywhere, so it might be a *one of a kind* thing.  Soooo I am going to whip up some long curtain panels to match to put on the windows on the other side of the Loom Room. 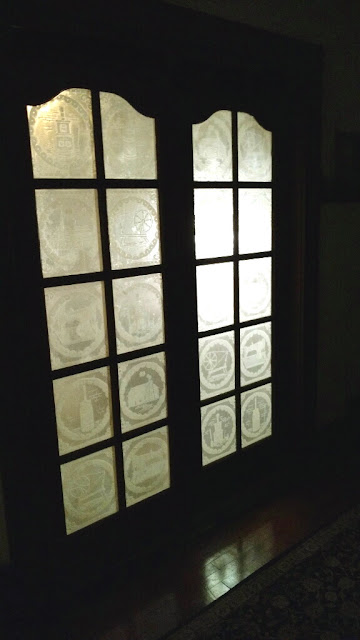 Posted by KarenInTheWoods at 4:22 PM