A Place to Call It's Own

I tried out a number of catchy titles for this blog:

A TREE GROWS IN CHILTON

THE PLANT THAT KEEPS ON GIVING

CONNIE AND THE BEANSTALK (that was Steve's idea)


In our small town of Chilton we are lucky to have a delicious main street business called Hilde's Deli and Bakery.

Last week, my good friend Connie brought a group of quilters to Hilde's for a lunch gathering and meeting. Connie noticed that Hilde's has a large collection of various tropical and house plants clustered in the foyer and along her large south facing windows of her establishment. 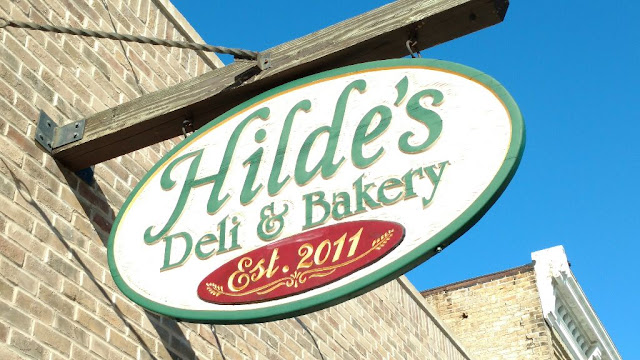 Hmmmm it turns out that Connie has a very large, very green, and very pot-bound plant that needs a new home!  If it stays outside on Connie's patio, it is going to freeze and die soon.  Winter is on its way.

Connie came up with a bright idea----  how about she donates the plant to Hilde's to add to her decorative collection of greenery???  We contacted Hilde who said ''Sure''!

We made plans for Connie to drive around the pond (Lake Winnebago) on Friday to meet up for lunch--- at where else? --- Hilde's!  I woke up to a foggy humid morning and looked out with dismay at the dark morning sky.  It was getting foggier even after Steve left for work at 7:30 a.m.  I snapped these pics about an hour later. 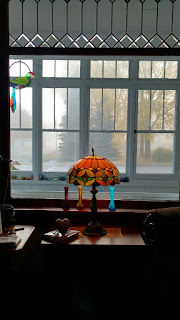 Planning to drive around Lake Winnebago, I did not want Connie to be battling the diminished visibility.  The fog clung on through the morning. I was hoping we would not be calling off our afternoon plans.  The weatherman promised it would burn off, and turn into a sunny day.  I had my doubts. I sat and knit some socks while watching out the window....  About 11 a.m. I was treated to this view: 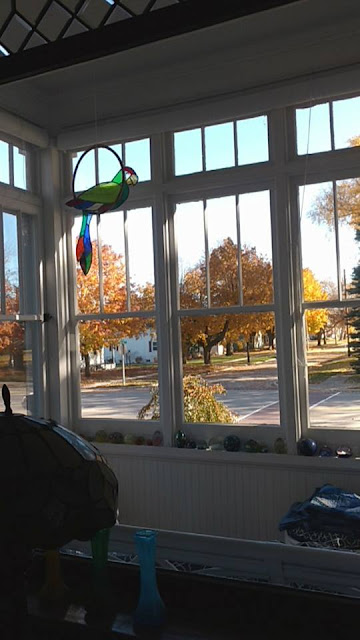 YAY! Our lunch plans were still on!

Connie called as soon as she got to town, and had everything figured out.  We first enjoyed our delicious lunch of fish and mashed taters and veggies and roll. Everything was scrumptious, as usual.

Next we took a quick side trip to the post office, as I had a package to mail out to my mom. I showed Connie the lovely historical interior of our local post office, with a mural painted by the WPA workers and the lovely woodwork, gilt lettering and brass work on the teller windows and door vestibule. It is listed on the National Register of Historic Places. 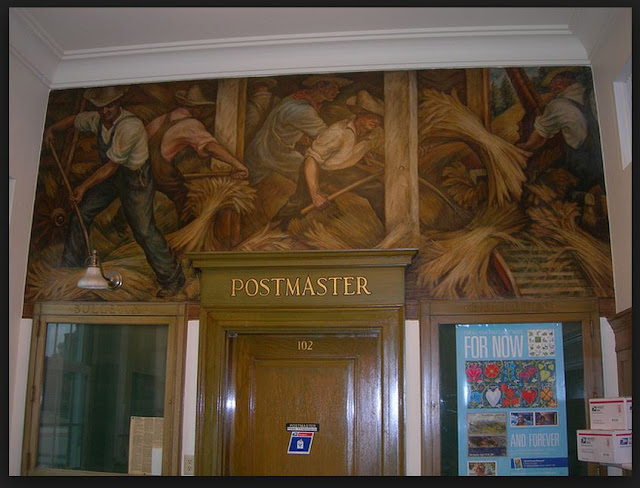 A Works Progress Administration mural
by Charles Winstanley Thwaites, titled "Threshing Barley",
is painted on a wall in the lobby

We buzzed back to my house and grabbed a larger flower pot....  because that huge plant was quite pot bound, with very little dirt left in Connie's original pot. We tossed that in the trunk of my car, along with some more potting soil and gravel for a base.

Connie is very organized and thinks well ahead of the game with a plan.  In the back of her car she had the plant on it's side, with a tarp underneath it. The thing was so tall it went all the way from the hatch back, over the folded down back seat and was peeking up to the front seat! She brought a large plastic shower curtain as a drop cloth, bag of soil and even a cutting blade to open the bags and trim back the errant leaves and broken ones during travel.

Amazingly, at age 78, she could hoist the plant up by the trunk and carry it into the dining area!  (we talked about Connie being proud of the fact at her age she is still so active, so I do not think putting in her age on the blog will bother her one little bit!) She sure does not look 78! I think she has more strength and stamina than I do.  She was actually picking rocks on the field at her son's farm!!!

She hoisted it up and carried the trunk, pot and all because it was so pot bound. I carried in the next big pot and the dirt.  We invaded the dining area after the lunch rush was done.  She spread out the shower curtain and we went to work.  I joked that we were The Hilde's Deli Gardening Club!  LOL

We carefully removed the plant from the old pot and transferred it to the new one, added more dirt and didn't make too much of a mess! 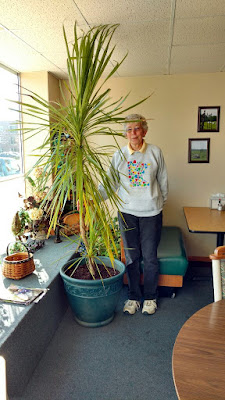 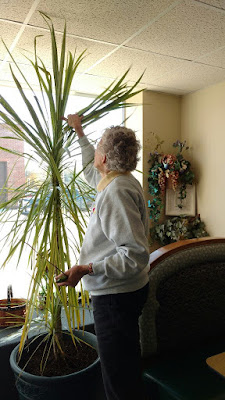 Here is Hilde and Connie, approving of the new addition: 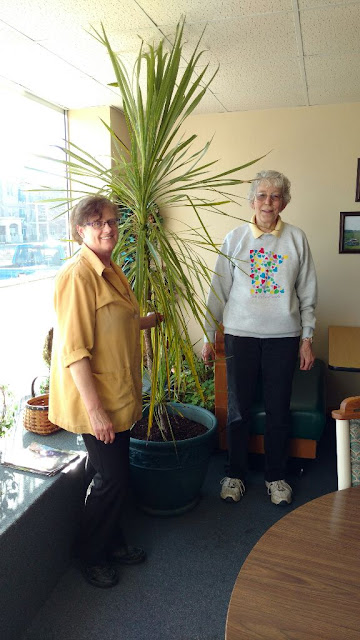 Now, to fill up the rest of my blog with a bunch of pictures (as I am known to do) here are some shots I took around of Hilde's Deli and Bakery.  If you ever find yourself in our little town, stop on by for some great food, wonderful deli items and amazing bakery products! 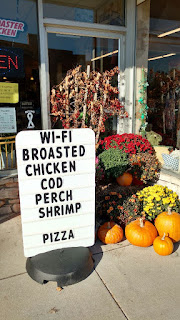 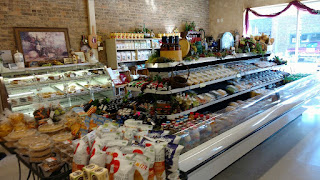 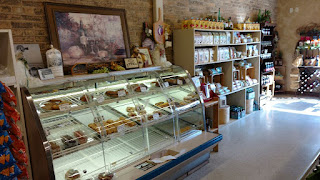 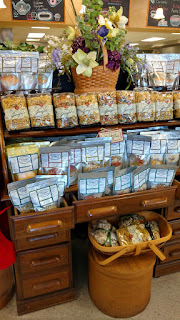 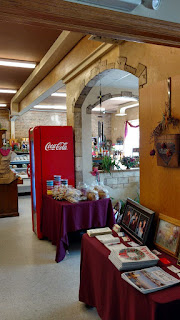 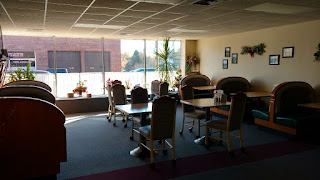 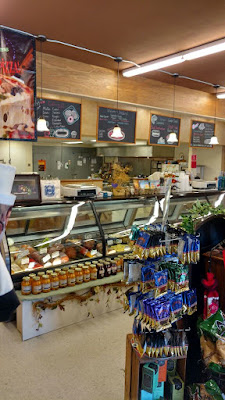 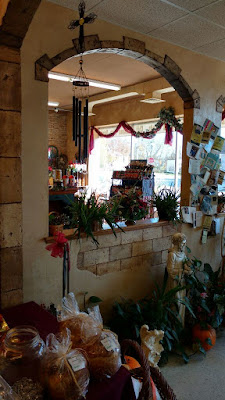 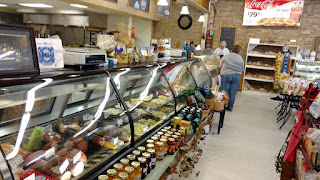 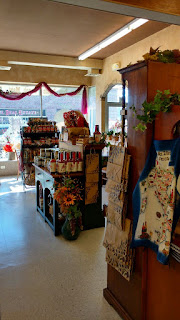 Connie came back to my house where we spent a pleasant afternoon with the dogs, yacking about family and quilting and projects and tons of fun stuff.  And she had sunny skies to drive back home, around the pond, to Oshkosh.

Tomorrow I will write about BAH-ZAN-YAH !!!!

Posted by KarenInTheWoods at 7:16 PM