Monday Monday back to routines

After such a nice weekend of good spring time weather, it was hard to get back into routines today.  Steve left early for work as he had some important meetings lined up.  Recently he has been interviewing the applicants for summer LTE workers (limited term employees) which will assist with maintenance, cleaning and customer service at High Cliff State Park.  The interviewing is an interesting process, complete with a few "head-shaking marvels" that apply.  LOL ...  but he will sort through them all to find his summer "crew".

Yesterday was so nice and warm, that in the morning we decided to give the dogs each a good bath... they still have Florida dust and sand in their fur, and both could use a scrub a dub dub.  Duke loves his baths, and now Finney is learning to like them too.  It's Finney's third bath since we got him in December.  We don't bathe them too often as it dries out their coats and skin during the winter months.


Finney went first and did very good but wanted to lick the bubbles!
Duke followed up second and he enjoys his baths soooo much,
that if you hold his head up in your hand, he will fall asleep and float! 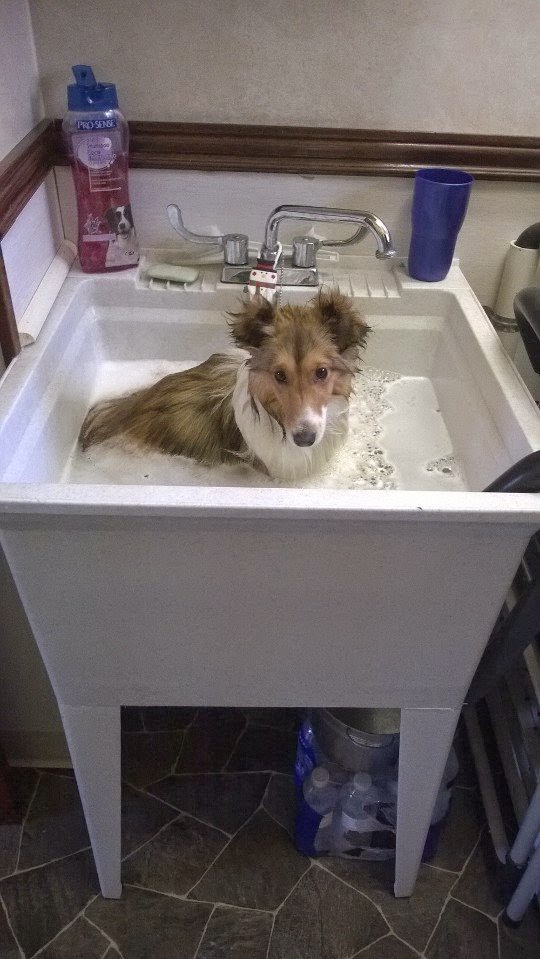 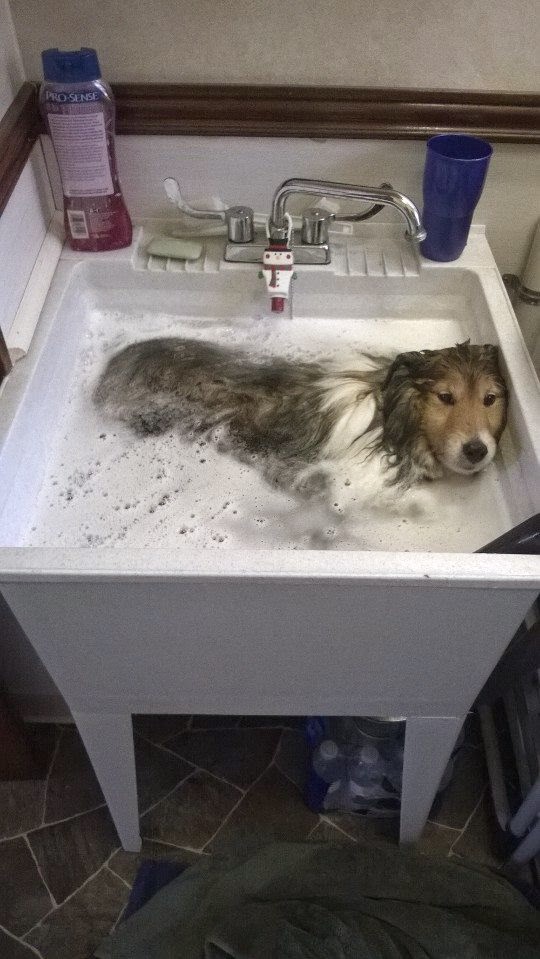 Each one gets rinsed well and lifted out of the laundry sink and left to lay on towels on the floor.  Duke has never done the "shake shake shake" business like most dogs, and we hope Finney will follow his lead.  I rubbed them both down with towels and absorbed most of the moisture so it wouldn't be flung far and wide if they did decide to shake.  Duke did NOT want to get out of the bath, just look at his face! 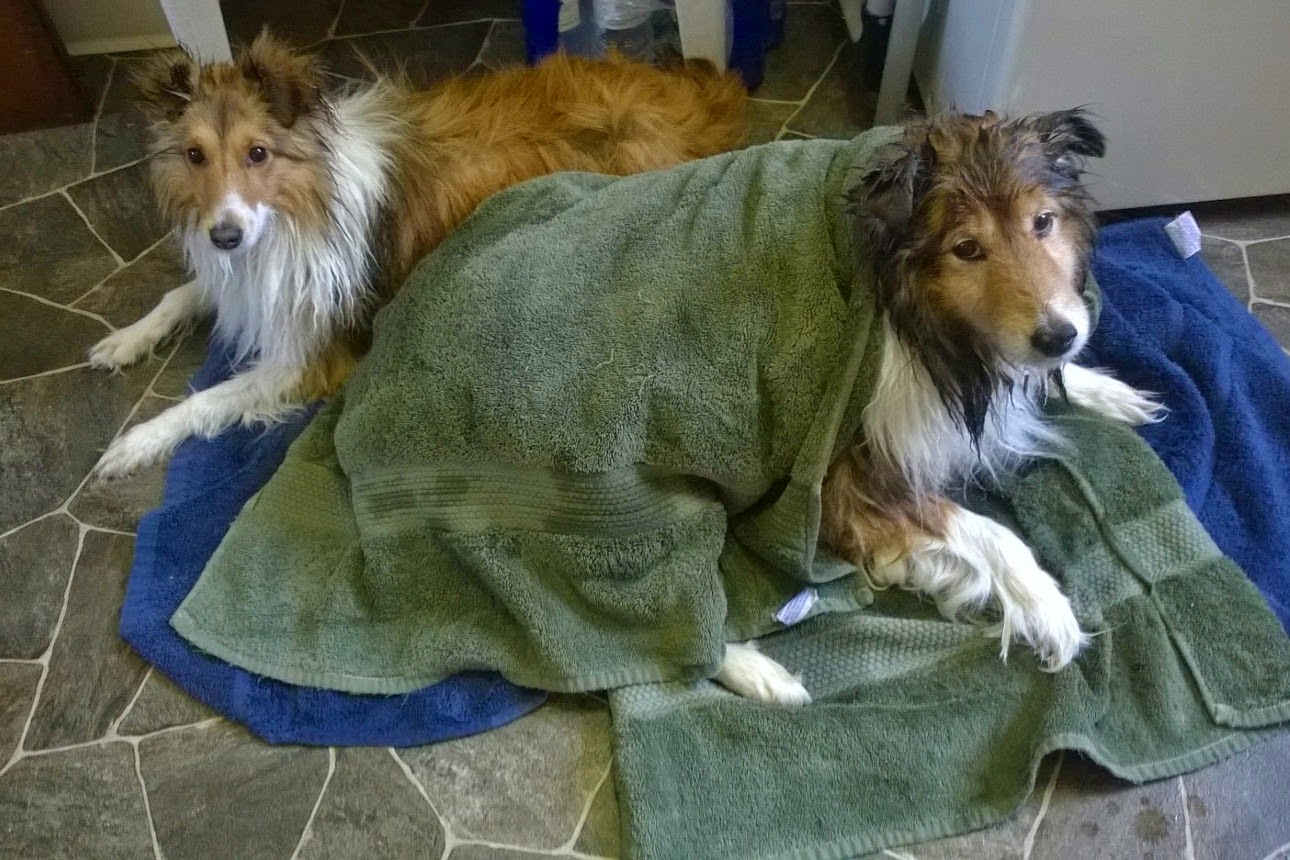 We left the dogs at home to dry off in the kitchen and laundry room, but blocked them from running around the rest of the house while we were gone.  We headed over to Appleton to have a nice brunch with Steve's Dad and brother Peter.  On the way we stopped at Critter Sitters boarding kennel to pick up a cute little stool I bought, but I will show pics later of when I refinish it a bit.

It was a nice afternoon to spend out and about. We went to Pete's for a while and the guys watched the Michigan playoff game... then we hit a few stores for errands and headed home.

Our dogs were almost dry, so they were able to go out on the ropes for a bit in the driveway (but not in the muddy backyard!)  We did some training for Finney to sit, stay, come, and heel.  He is learning well and soon will be a good companion for walks.  It was such a nice day!  Snow is really melting fast now, and we soon will be down to bare ground.  But we won't hold our breath for Spring, because we have been known to get more snow or ice well into April.  Icky!

We relaxed for a while out on our front porch, and enjoyed the rest of the afternoon in our "second livingroom" out there.  The dogs settled into good spots for a nap, and we lollygagged around until it was time to make some supper.

Two tenderloins had been marinating for a day in the fridge in some Andria's steak sauce (from St. Louis area... actually in O'Fallon)  http://www.andrias.com/sauce.html   Our RVing friends Jim and Dee introduced us to it several years ago.  It can be ordered on line, but last time we drove down in that area, our other RVing friend Donna went with me to a local grocery store that carried it.  We cleared out the shelf and stocked up my pantry!  LOL   It can be brushed on while cooking or marinating or of course while eating.

Steve popped our steaks out on the grill while I made baked potatoes, wax beans, and .....

a special thing we have been making lately are these little packets of biscuit mix from Save A Lot stores... this is the cheesy garlic flavor.  They are 79 cents a pack.  Much cheaper than a tube of Pillsbury biscuits.... 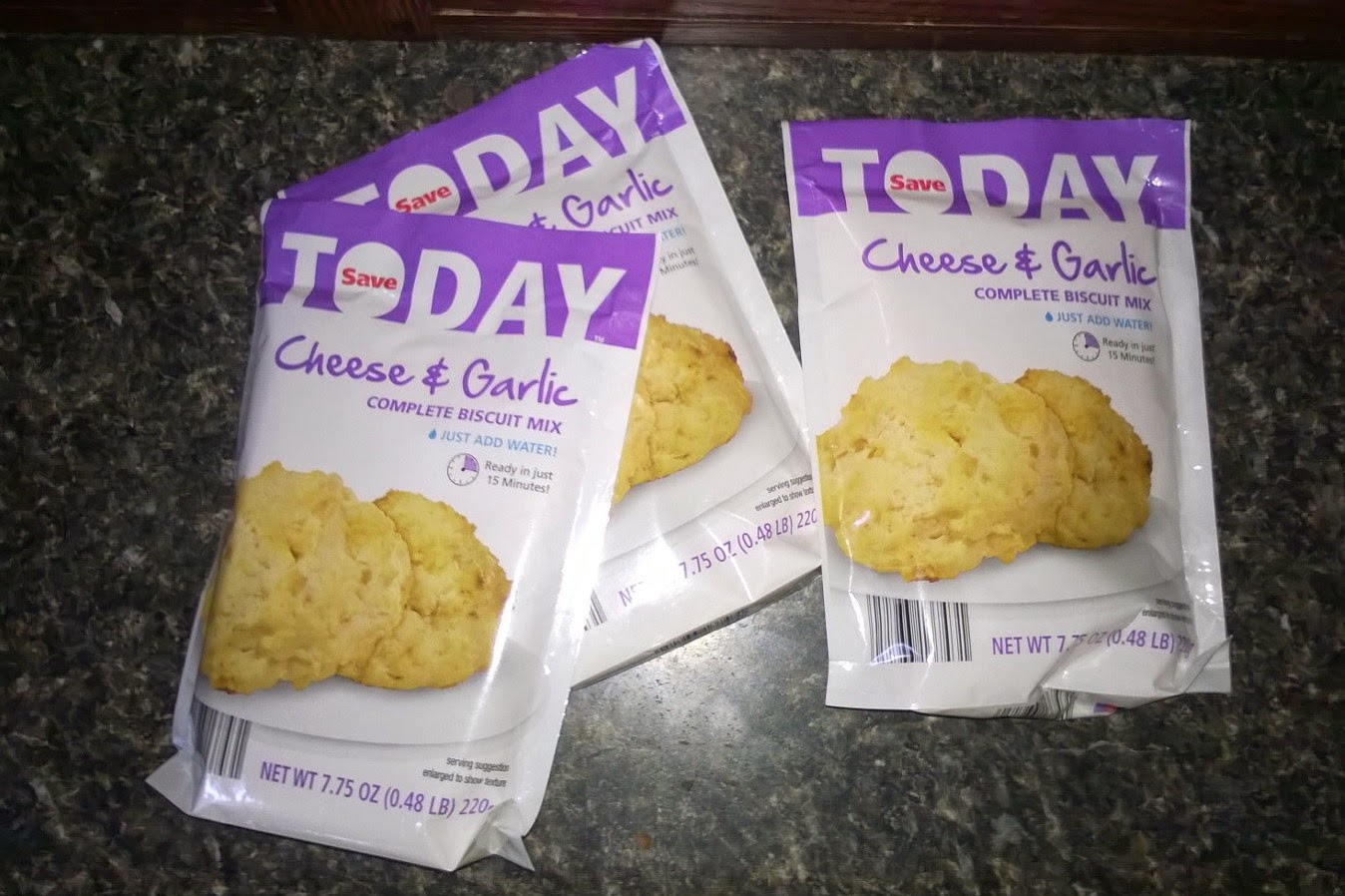 You quick mix them up in a small bowl with 1/2 cup of water, and drop them by spoonfuls on a tray (I like to bake with parchment paper)  Bake em for 12 minutes or so and they come out deliciously crispy around the edges and soft in the middle.  They remind me of the biscuits you get at Red Lobster! 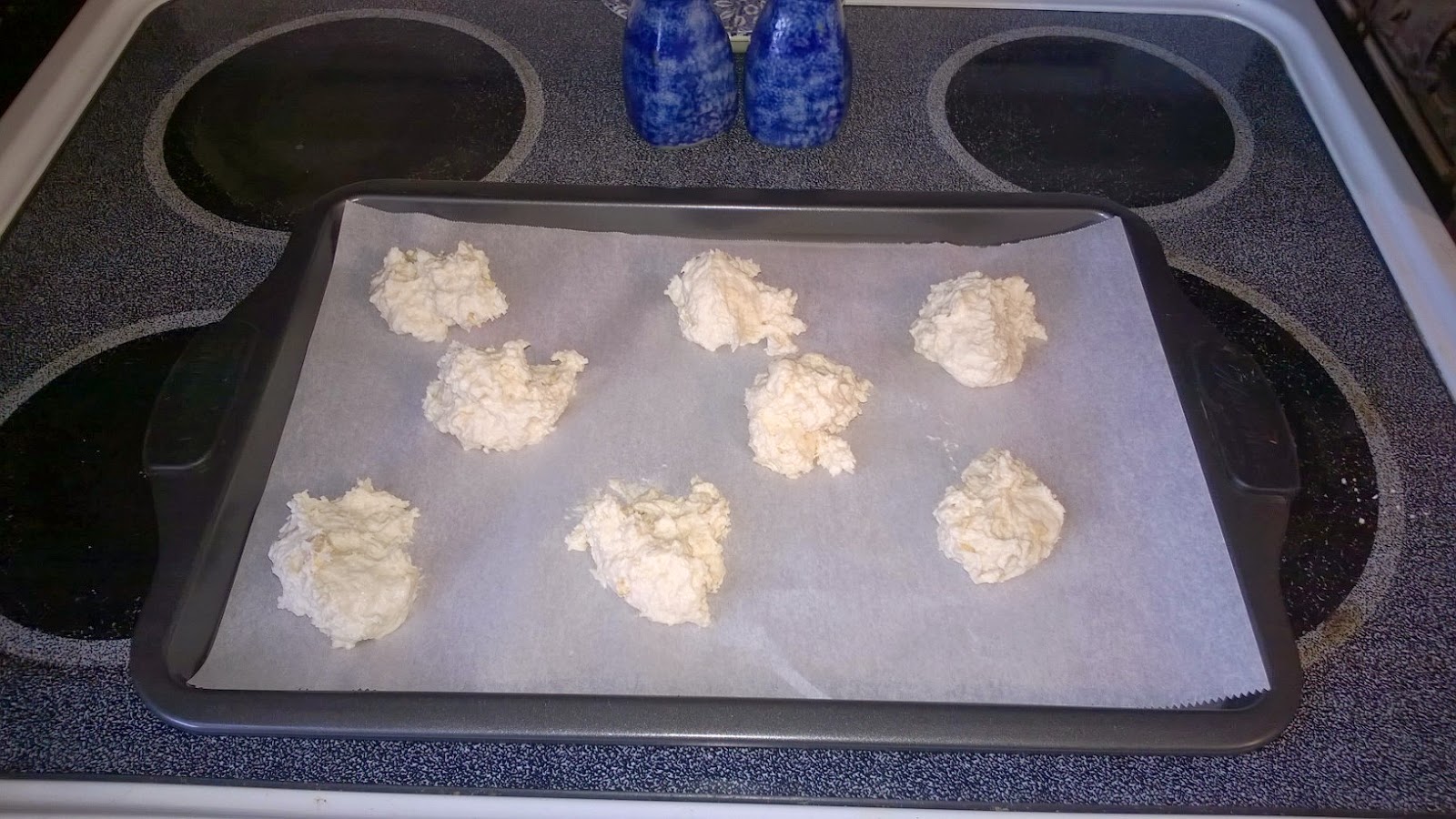 We only eat 2 with our meal, so I put the other six in a zip lock bag and toss them in the freezer.  Later we reheat them in the oven and they are just as good as the first time around! 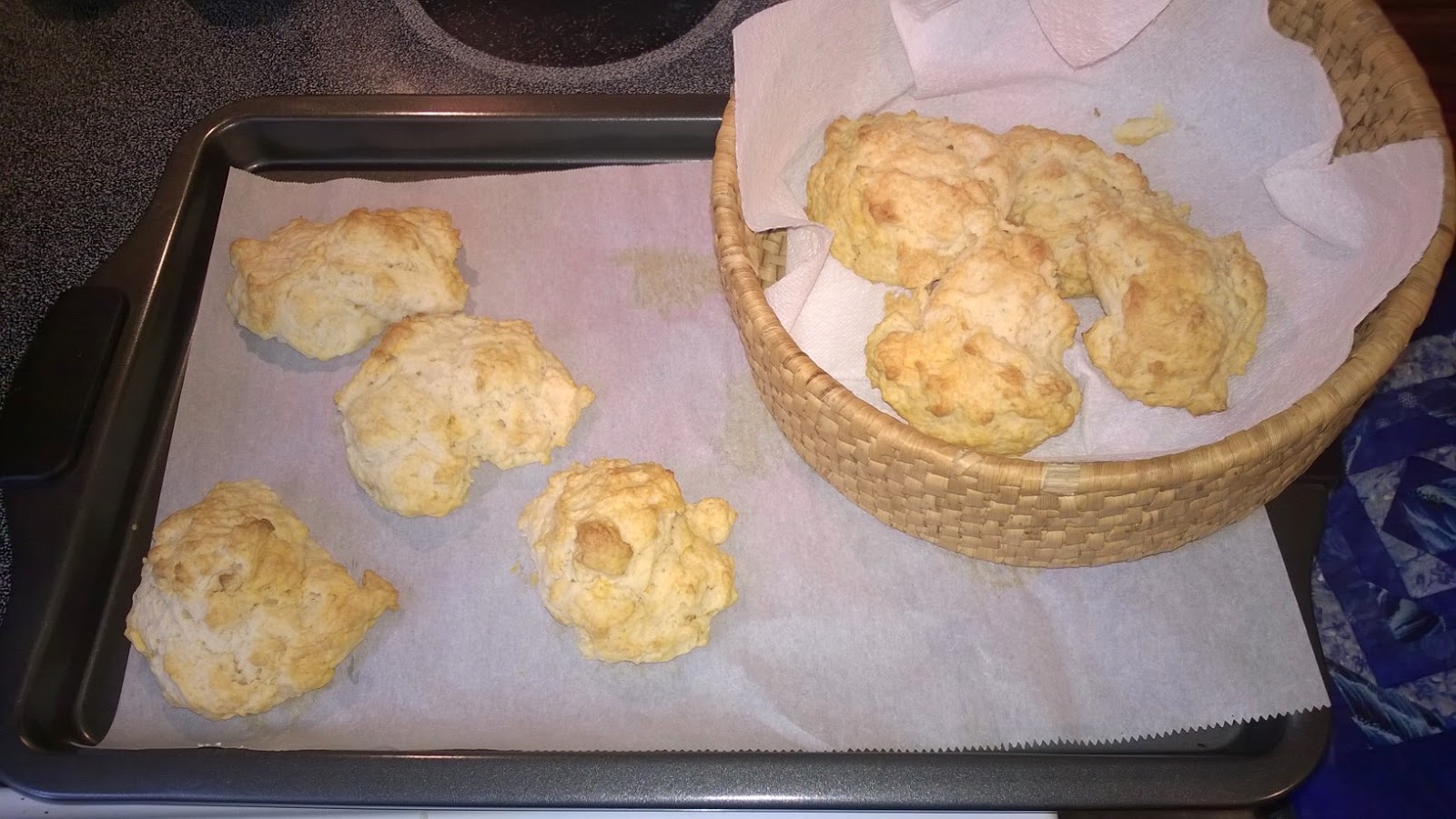 As I said, Steveio had to go back to work today, and so did I.  I worked on some sock orders this morning, and sent out some shipments of items.  The morning seemed to fly by, plus I was on and off the computer a lot today.  Had to slap my hands after lunch and set the computer aside.

This afternoon I started tackling the cutting up of all of that denim fabric I washed up and dried that I had posted about in my last blog.

I draped a 60 inch wide piece of fabric across the island in the kitchen. Each piece of the fabric is 25-30 feet long.  Although I am using a cutting tool that doesn't need a cutting mat, I put down my Olfa cutting mat to protect the surface of any accidental scrapes.

Folding the fabric up in a triple layer, I start cutting into the denim ... making rows of one and a quarter inch wide strips.  Going through three layers of heavy denim is easy with the electric Rockwell Zip Snip tool, and I easily got a whole piece done in no time.  I did two complete hunks of denim, and never ran the charge out of the cutter. 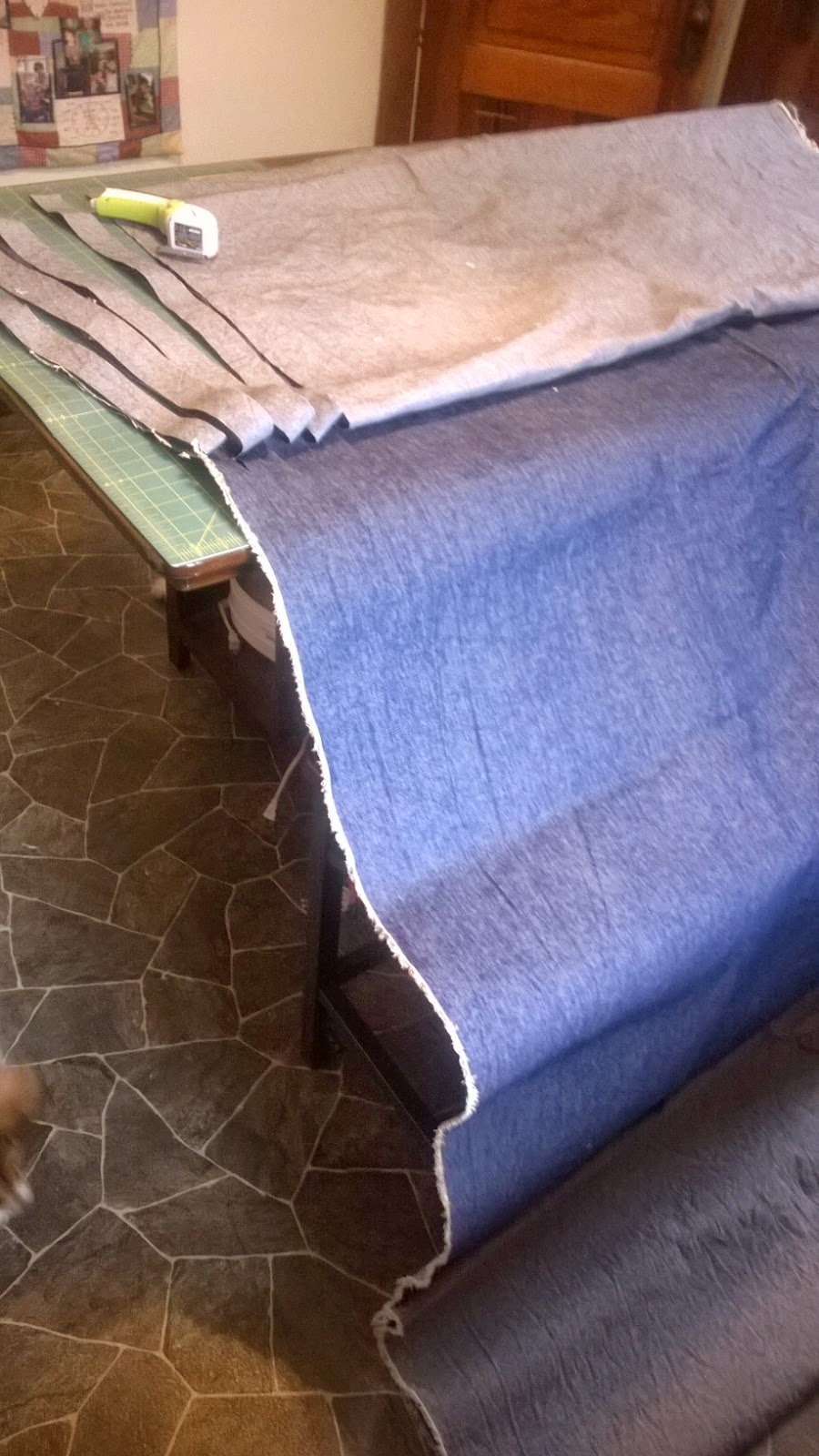 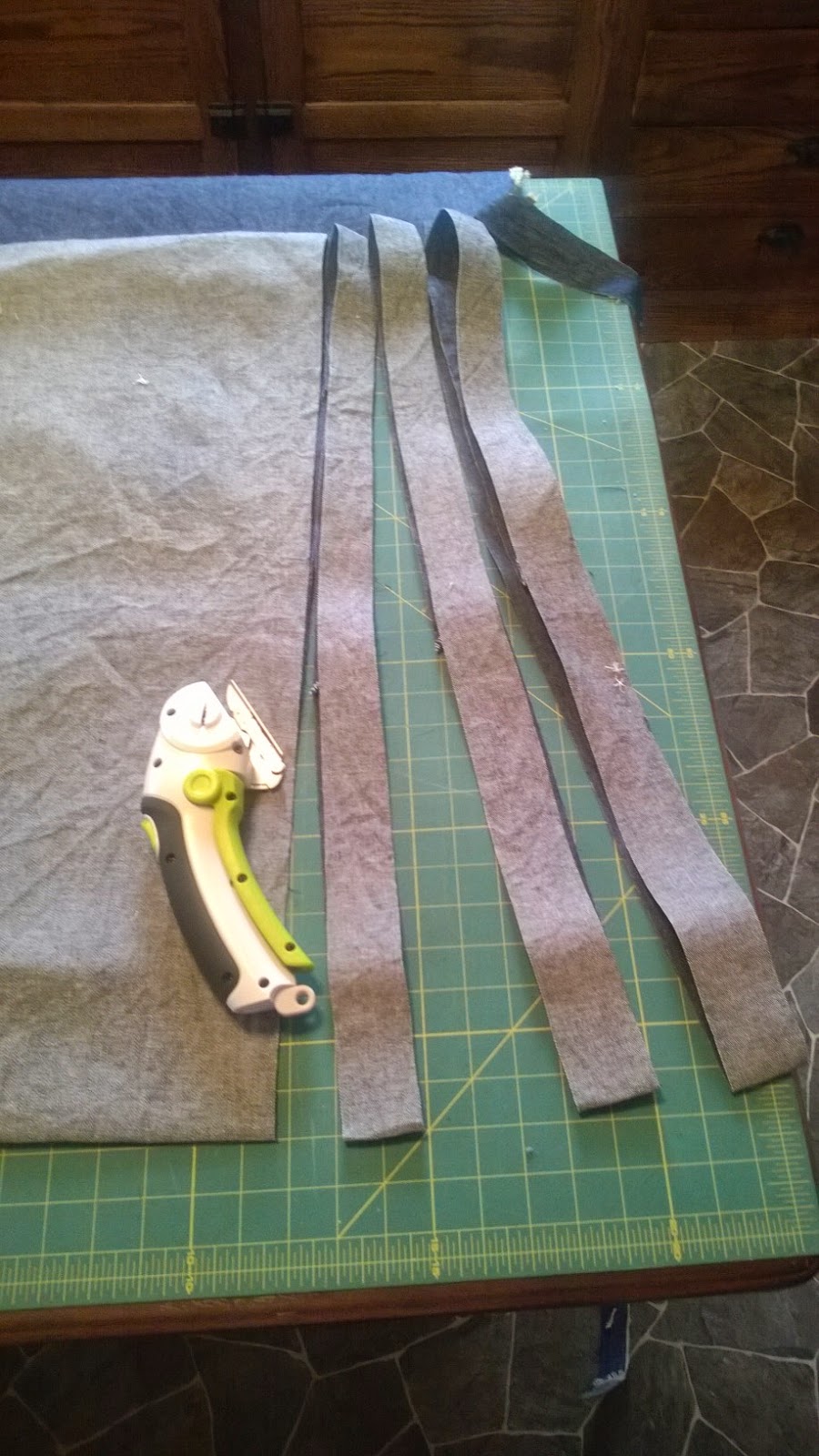 Next I will sew each of the ends of the 25 feet long strips to the next, making long strips of fabric to wind on the shuttles to weave rugs.

Of course, I had two assistants to oversee my process and make sure all of the strips were cut correctly and that the fabric now had the correct level of softness! 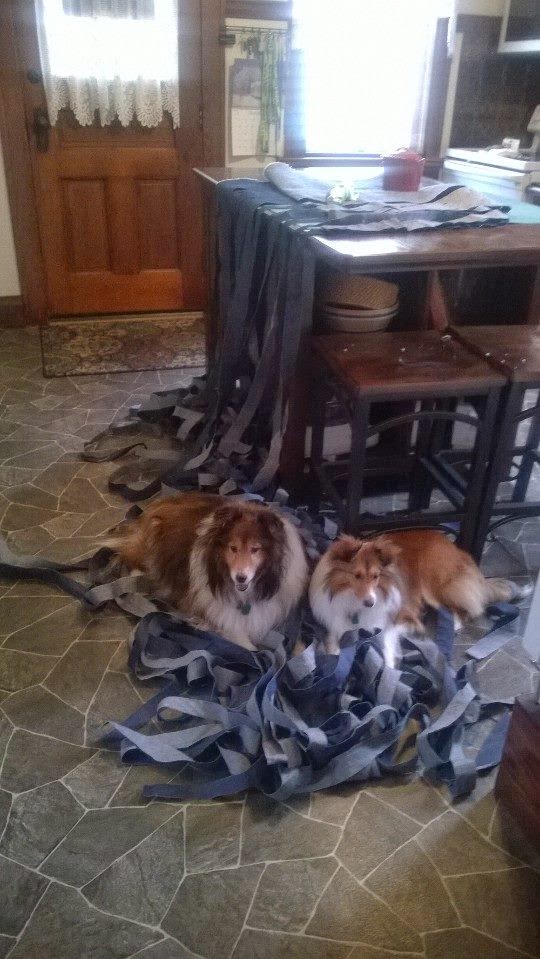 
I had two questions on yesterday's blog:


Lona said...
Do you like the ZipSnip? I've been looking for an affordable motorized cutter to cut corduroy and denim... How long have you had it? Does it make your hand tired?

Answer:   I LOVE the Zip Snip. I have had it about a year now and am still on the first blade!  It doesn't make my hand tired at all.  The rotary wheel does all the cutting and it slides through the fabric like butter.  It has a 2 switch process to operate.  You need to depress the top button with your thumb and pull up the bottom lever with the rest of your fingers as you grip the tool to make it run.  The cordless design is nice so you don't accidentally cut the cord!  I did probably 50 cuts on each of the two 25-30 ft lengths and didn't run out of a charge.  Now it's back on the charger to be fully recharged for more fabric cutting tomorrow.

Hazel said...
Washing your denim and carrying it outside sure looked like work! If someone hung the dry fabric and hosed it down, would that be enough to get the stiffness and /or sizing out of the fabric?

Your rugs are beautiful!

Answer:  Hazel, Thank you for the compliment!  Yes it was work to get it lined up on the washlines at 60 inch wide fabric, letting 30 inches hang down on each side of the line.  Not letting it touch the muddy ground either. Then of course, horsing up the length of 25 feet or more of heavy wet fabric the entire lenght of each clothesline!  It would have been easier with two people, I admit, but Steve was at work on Saturday so I did it on my own.    He did help me take them all off, and fold them over and over as we worked our way down the washlines to take each piece off.

Hosing it down on the line wouldn't really work, but it's a good thought!   See, the fabric needs to be washed well in hot/warm water and have added fabric softener in the rinse.  This is a commercial grade fabric that is treated with very stiff sizing to make it firm enough to be run through commercial sewing machines and withstand being cut in multple layers with huge cutting tools.... and not shred or fray during the process where it's turned into a finished product.  This denim was originally used to make shop aprons for a custom order, and I bought the four leftover rolls of the excess not needed by the factory that was making the aprons.  This fabric is not like home sewing type clothing fabric you see in the fabric stores. (although they have some sizing in them too and should be prewashed)  But when using new heavy fabric in weaving, we need the fabric as soft as possible so it beats in tightly when on the loom, not stiff or unyeilding.

And then there was a third remark, not really a question....


Merikay said...
There is a slight possibility we may be heading toward Wisconsin in August. We will keep you in mind. A week or two up North might bring back childhood memories.
.

My reply: Oh yes!  We would really enjoy meeting you Merikay!!! As a matter of fact, we would love to meet up with any of our blog readers!  If you ever find yourself in the eastern area of Wisconsin, between Milwaukee and Green Bay, we are always ready to welcome visitors!  There are five or six campgrounds nearby, (of course one special one called High Cliff where Steveio works)  But we don't have any clout on getting a camp site, you have to go through Reserve America to get a site or take a chance on driving into the park and seeing what is available.  But other campgrounds around are very nice too and not as busy on the weekends.

Well, it's time to get a few more things done before bed...
and maybe read a few other blogs yet tonight.

Posted by KarenInTheWoods at 8:46 PM