San Antonio, The Missions, Riverwalk and the Alamo

Oh my my.... two of my fellow blogging buddies rallied around our arrival at Travelers World Carefree RV park.  Here is the link to their site.  http://www.travelersworldrvresort.com/   We had reserved a full hookup back in site for $40 a night.

When  we were registering at the desk, I mentioned my friend Susan was on site D... the lady said: "Lucky You!  you will be on site E right next to her!"   Out of 150+ sites, what were the odds of that happening?

We pulled in and there she was!  Hello Susan!   (of blog http://travelbug-susan.blogspot.com )  We got backed into our campsite and ready to start our whirlwind tour of San Antonio.  Steve had our power hooked up to the post, and we set the dogs inside the bedroom/bathroom area with a radio on playing loud enough to drown out any outside noises they might hear.  Then they don't bark, they just SLEEP! 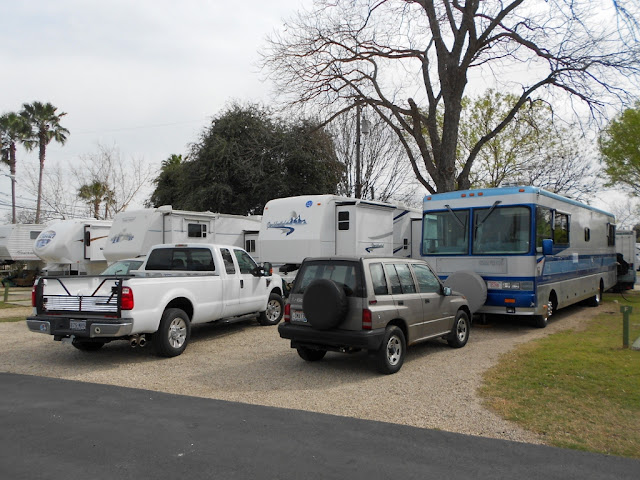 Soon our other fellow blogger, Colleen arrived (of blog http://travelinglongdogs.blogspot.com ) with hugs to go around too!  Those two have met each other, but neither me or Steve.  So it was "best friends who never met yet" time.  We gabbed and laughed and headed over to a little mexican restaurant for lunch.  Poor Steve had the role of the Rooster in the Henhouse with us cackling biddies... tee heee but he didn't seem to mind. 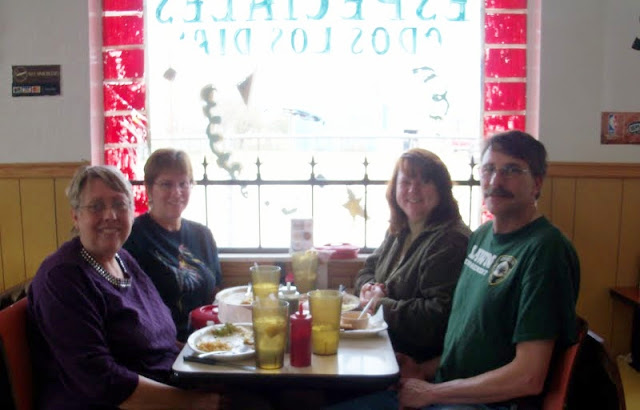 There are five historical missions in San Antonio, though most only hear about The Alamo.  The gals took us over to the San Jose mission near the park.  You can read more about the five missions here at this link:  http://www.lsjunction.com/facts/missions.htm     We were able to join up with a tour group and got a very animated and knowledgeable Ranger named Anna to explain all about the ancient tribes, and then the missions and how things developed to the point of reconstruction today.  She made history come alive.  So much so, that I wrote an email to her bosses, complimenting her and telling her bosses to appreciate her!   Hope she gets a raise? 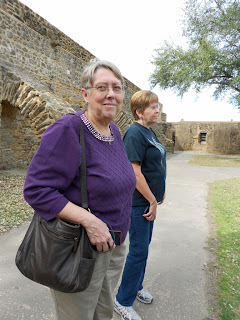 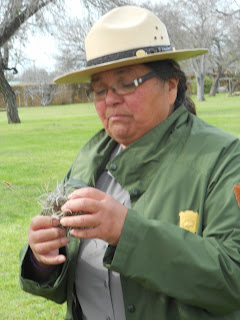 We toured around the grounds, and looked at the granary, the grist mill, the quarters were the monks stayed and also the quarters where the native inhabitants came to stay for protection and learning.

The mission itself was in various stages of restoration, but is used to this day for Catholic masses and events.  I knelt for a while and said a prayer for Grandma Kafehl and my mother-in-law Maryanne who recently passed away.... it felt like the right thing to do. 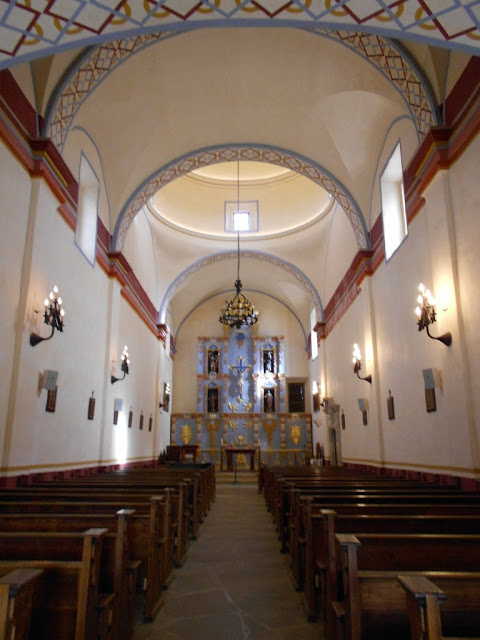 Afterwards, in the smaller alter room near the sacristy, there were candles that could be lit for a small donation, in memory for a person.  I lit one for Grandma and one for Maryanne.  I think they would both be pleased. 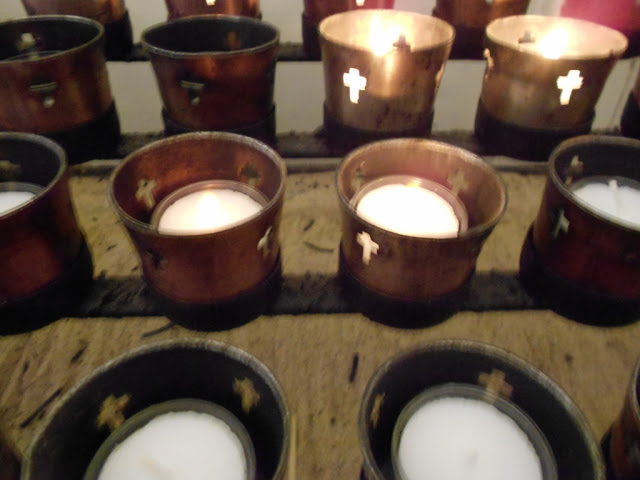 While touring the grounds, I was most interested to hear about the church's ranch nearby where they raised the churro sheep for wool for weaving, and also the cotton that was spun to make summer time clothing.  A few mentions were made about the teaching of weaving to the residents of the mission, so they could learn a trade and become farmers instead of hunter/gatherers.  During the movie segment, they showed how sheep were used for running over round and round on flax to help break down the fibers for making linen.  The did have one segment during the movie of weaving, which I snapped a picture of right off the movie screen!  LOL


( this is for my fiber friends who are blog readers) 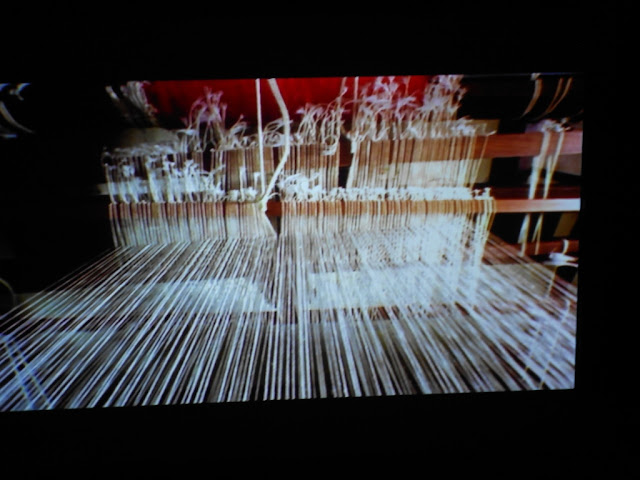 Once we were finished with the tours, it was much too late to catch a tour of The Alamo before it closed at 5pm.  Instead we lollygagged at the campground for awhile before saying our "See You Later's" to Colleen as she had to head on back home.  Also Susan was nearing the end of her touring energy and went back to her RV to feed the kitties and get dinner going.   They gave Steve and I good hints of what to see and do downtown that evening.

Both gals wrote a blog about our day... with many more photos and good explanations about the things we had seen up to this point.  Both can be viewed by clicking on the links below:

Steve and I hopped in the Tracker and headed downtown San Antonio.  We found a parking spot right away within a block of the Riverwalk.  We made double and triple sure of the location of the intersection we parked at, because once we got down below street level, it would be hard to figure out where we started.

Oh my----  it was a whole other world down there!  It's a sub-level walkway that winds alongside a channel that cuts through the city.  Many restaurants and hotels open up from their basement levels out into the Riverwalk... and other businesses are just only on the riverwalk level below ground.  Tour boats float up and down the river, and we heard so many of their announcers voices giving information, we didn't even need to take the ride. 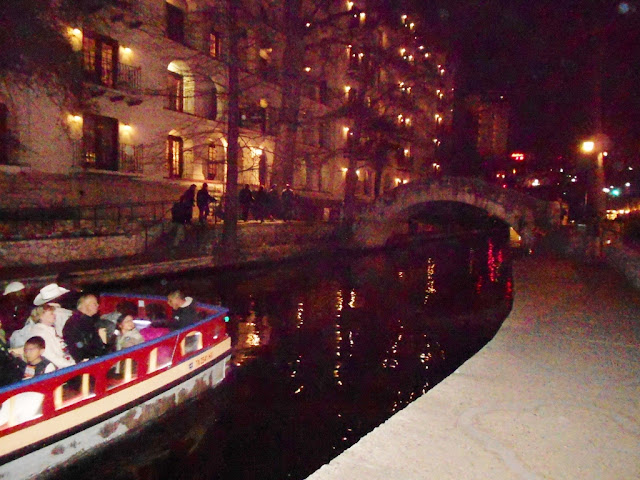 It was almost surreal and otherworldly.  The sounds were muffled by the plantings on the sides and the water flowing past.  Colored lighting and various plantings added to the winding trails and pathways through the dark sections.  You could cross over and back from section to section if you wished, and most areas were lit in some muted way. 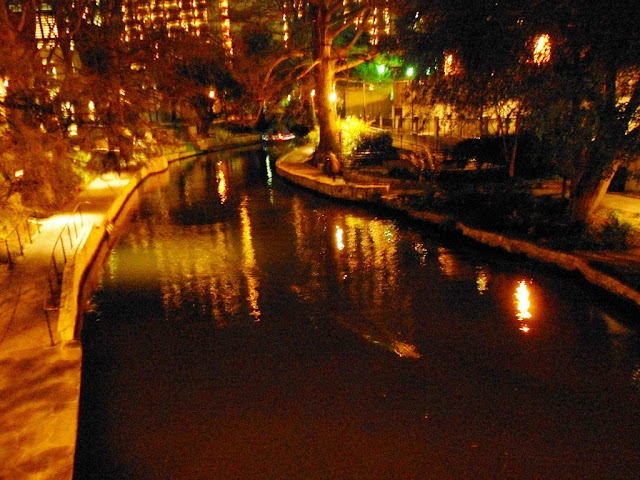 We wandered through quiet areas and darkened corners, and then into brightly lit areas with music, dining, laughter and people.   Of course I took fifty bazillion photos, but am only going to post six of them of the riverwalk.   We found this little duck hanging out near a dining area... one can only guess what his diet consists of with all the human food nearby. 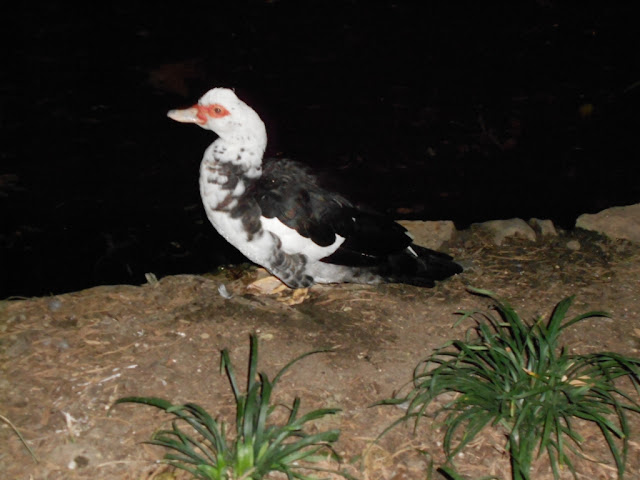 We wandered along, and sometimes stopped here and there to take it all in.  The soft lights, the music, the people and most of all, the twinkling water with dancing lights over the surface made it all seem so magical.  I suppose during the daylight it would have looked different, dirty, or cluttered.  But at night, it was a new world to step into.   This area was where the movie Miss Congeniality was filmed (with Sandra Bullock)   It is an outdoor amphitheater  and had rising bleachers to the left, not in the photo. 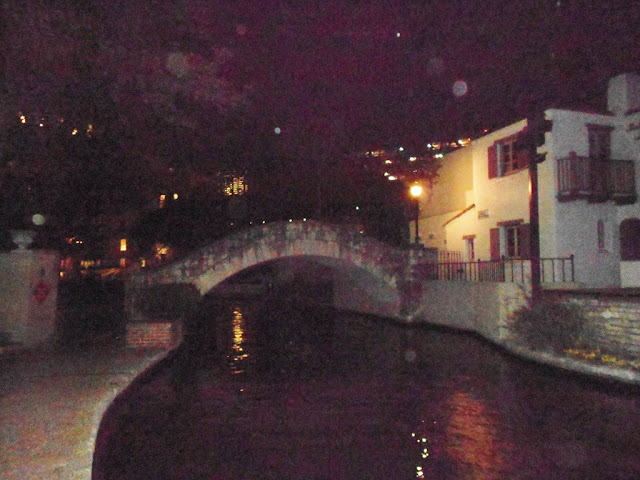 Many areas were empty of any people at all....
so we did a little smooching in our own private
"Tunnel of Love" 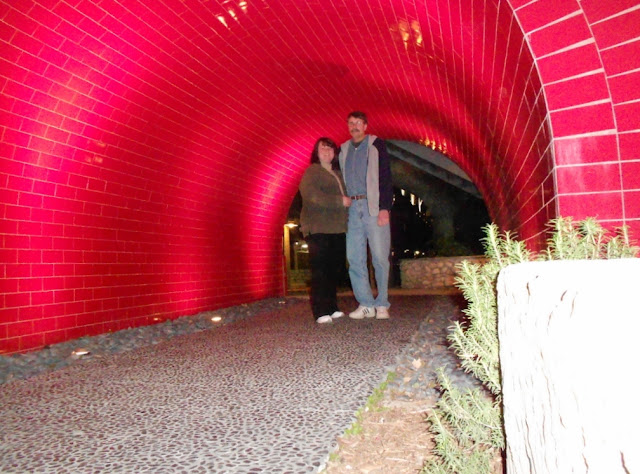 As we got back near where we started, we didn't find any of the restaurants especially appealing to us. Maybe that huge lunch we had was keeping us from being too hungry?  We found these cool cement benches shaped like a livingroom couch to sit on for a while.. and just savored the peaceful night air in the quiet darkness.  This was someplace we were not going to forget for a long time. 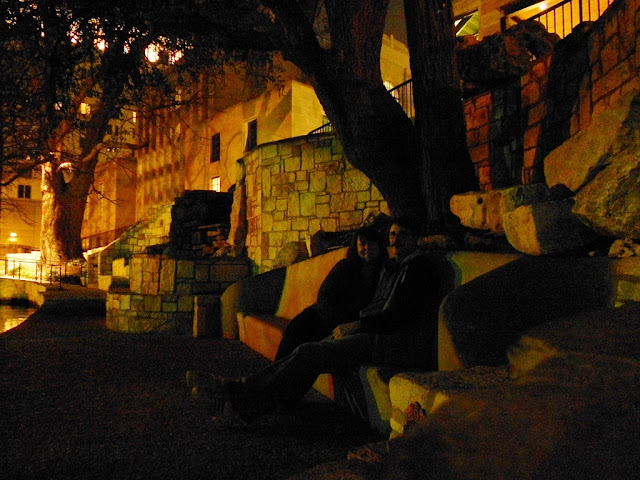 When we got up on top at the street level, we wandered over to where some lit up horses and carriages were waiting. 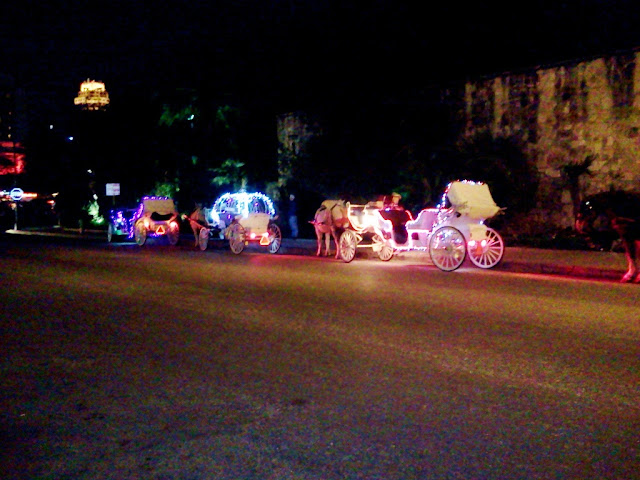 They were so cool and we were thinking of taking a ride as I snapped a few photos, but then I realized we were very near The Alamo!    Well, that topped that, and off we went over to The Alamo.

I bet not too many folks get a clear unobstructed shot of the Alamo during the daytime hours without lines and lines of people waiting to be rushed through it!   We had all the time in the world and not many people around at all! 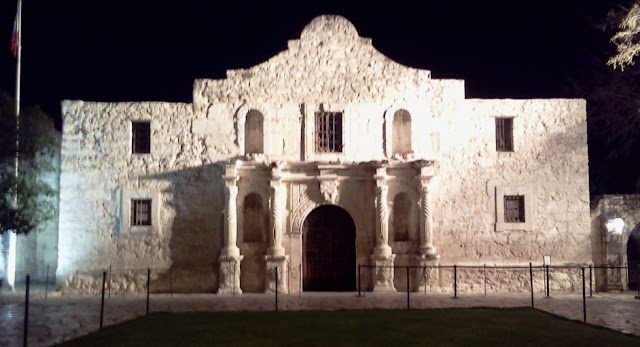 There were brochures available, and a 24 hour guard on duty who answered some questions and pointed out a few things to see.  We got time to read all of the plaques and check out the views through each window all around the fortress area.  I even shined my flash of my camera on focus to see the darkened areas.  So we did our daytime tour in the evening. 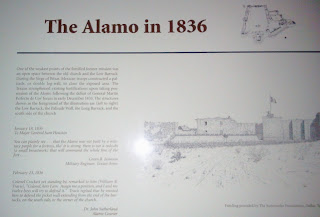 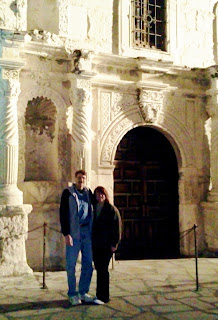 We snapped a pic for a father and son with their camera, and they reciprocated and snapped one for us.  Such tourists, eh?

Although you couldn't get inside, the grounds were lit up and far less crowded at night.  We got to see and touch the building outside, the doors, the walls of the fort, and peek through the bars into the open area beyond.  I think with our understanding of all the five missions from the great talk earlier in the day, we got a much better picture of what we were seeing once we reached The Alamo.  And even if we didn't get inside, I think we got a much more personal and up close experience by being there in the peaceful night time hours.

Now... we were getting hungry!   On the way downtown, I had seen this sign: 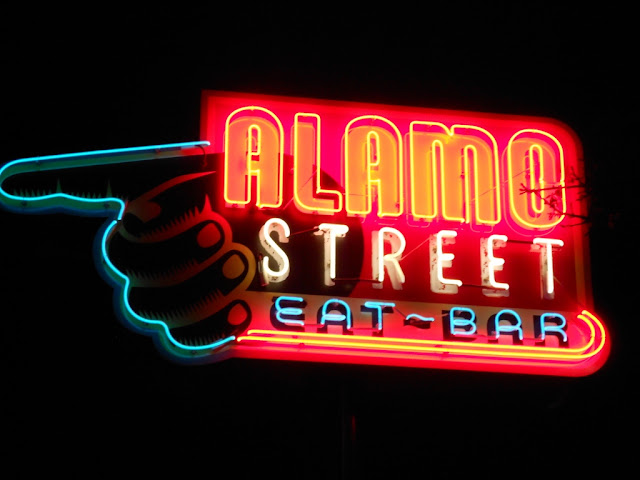 It was a little outdoor patio street place with a little shack that served beer or wine.  Around the edges were parked various little vendor trucks and trailers selling food.  In the middle were picnic tables and people and lights and dogs and fun and laughter.  And set up on one end was live music!  Now how could it get any better than this??? 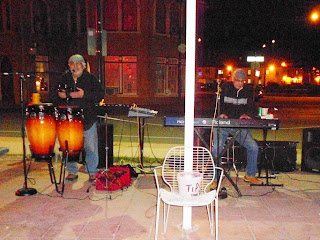 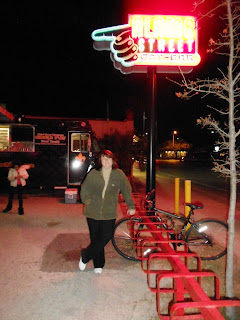 Yes, we bought our food from a guy cooking it in an Airstream Travel Trailer!!!   What fun!   He was so nice and we had our choice of five or six menu items. 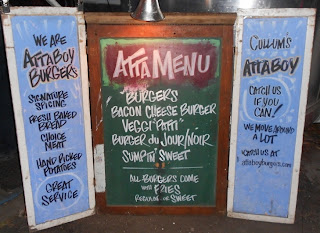 When your food was done, he hollared out the door your name and to come and get it!   We sipped our drinks, and took in the local flavor of the place.  We spoke to a few folks, who lived nearby.  This was the place to come and unwind in their neighborhood.  We petted doggies and smiled at folks living it up and having a good time.  Soon our order was called out, and we dug in.  We had the Burger du Noir (bacon cheeseburger with jalapenos and melty provolone cheese)   The fries were dipped in some kind of breadcrumb batter and were delicious.   I could not even finish half that thing, but Steve managed to eat all of his.   What a perfect way for two RVers to have dinner?  Cooked in an RV ????? 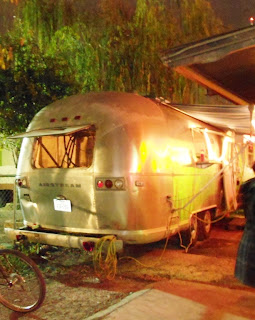 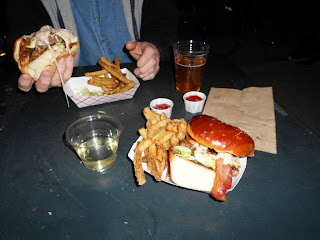 From there, we toddled on home with full bellies and our minds whirling with all we had seen and done in one day!


Posted by KarenInTheWoods at 10:48 PM