All the World's A Stage - and so is our refrigerator

Steveio decided to build a stage too.  For our refrigerator????

See, the section of the wall where we plan to put the refrigerator in the new kitchen space is right in front of a heat register.  First plan was to reroute the air duct further over or on another wall.  That didn't seem to fit too well in the basement and would end up in our doorway down there to the furnace room  Sooooo what to do next?

New washing machines and dryers are up on stages (or raised boxes for a better word)  so Steve decided to build one for our refrigerator.  Actually the fridge that came with the house purchase is nice, but it's on the small side anyhow.  Raising it up another 10 inches would make it more accessable.  Especially for Tall Man Steveio.   Our last fridge in the other house was a side by side, as is the fridge in our motorhome.  Much easier to reach into and find things.  But this top-freezer model is making that tall guy bend wayyyy down to access even the middle area of the fridge where we keep his beers!

So he got to work---- building a strong solid box with some tin ductwork and vents on the front and side to redirect the air flow. 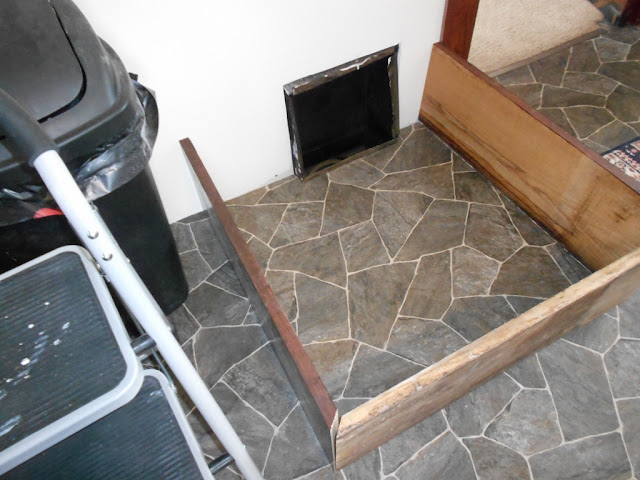 He made angle cuts for the outer corners, and started reinforcing the framing.  He used construction glue, screws, nails, blocks and gosh knows what else! 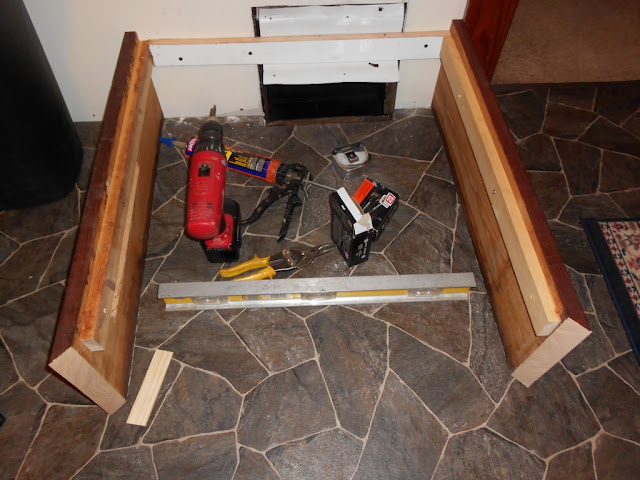 He was working away on it before supper, and took a break to eat.
Then it was back to it---- 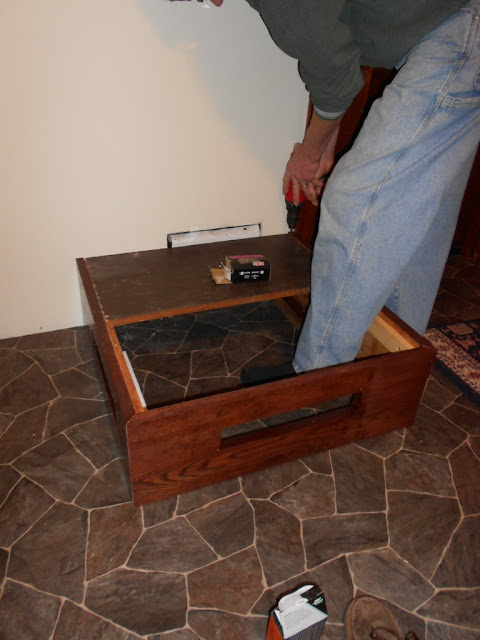 He is very confident of it's strength and did a "Demonstration Dance" to show me how well made his stage is.  What a star of stage and screen?   (and my blog?)   He said we need to install a pole now? 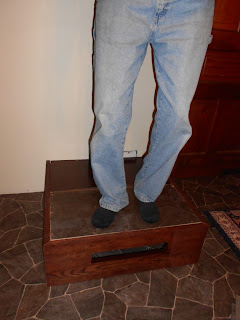 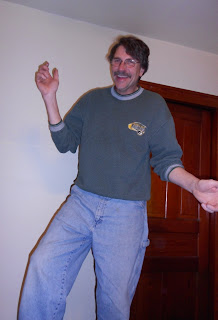 And I added a layer of colored polyurathane to seal over the top.  We do have some pieces of the new flooring leftover that we might add to the top surface.   He added the two vents for the air movement out the front and left side.  We kept the right side by the doorway solid wood with no vent, as we didn't think we needed much heat going that direction.  There is another register right outside that swinging door in the dining room, and also another register in pantry to the far right. 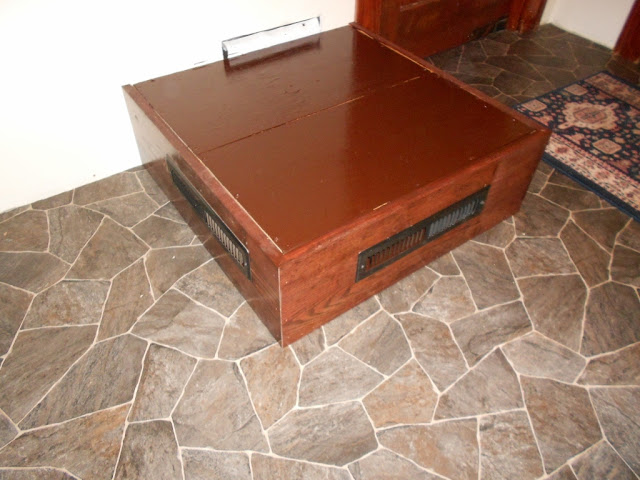 Maybe tomorrow we will move the fridge over and slide it up into place.  Then we will attach some trim strips around the top edge to keep it in place.

Ohhh as for my stove, I did bring in our blue enamel soup pot. I put it up next to the white enamel strainer pot I got at an estate sale last weekend here in Chilton.   I think it really set off my little corner over the stove quite well.  We don't have any cabinetry to fill in that space over the stove, so I think these pots will do quite well. 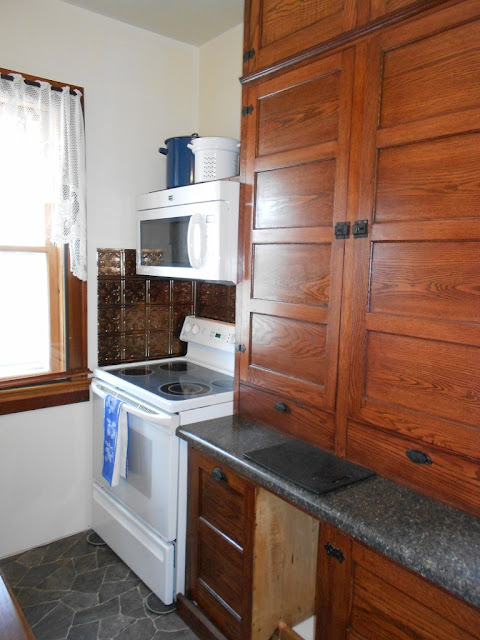 We bought an oak door panel for the pull-out trash bin.  I will get that stained up perhaps tomorrow.  Then we can attach the sliding bracket device and add a trash can.  Will be peachy keen once it's done!  And a good compromise to having to omit one of the pull-out bins that were originally side by side in that section of cabinets.


I mentioned yesterday there is a really emotional story about this special soup pot.   When Steve and I first started dating, I was really trying to figure him out.  He would disclose a few things about himself, but it took a little digging to find out more.

Turns out that when he left his home after his divorce, he left behind all the household items completely so the boys' world would remain more constant and less upheaval.  He didn't have much of anything and could not even afford his own apartment.  It turns out he was paying his child support of course, but also the taxes and mortgage on the house to keep the same roof over his sons' heads until they graduated high school.   And he did this gladly, without complaint.  What a refreshing change from the tune I would hear from most divorced men I had dated.  They all complained about the B***h draining them dry, etc.   Steve was honorable and caring about having the best life for his sons, even if his wife wanted a divorce.  Thus, due to such a diminished operating income, he was living in a room at a co-worker's house.

In exchange for room and board, Steve was gutting and remodeling the entire house, room by room for his co-worker.   He had just laid the ceramic tile flooring and installed custom cabinets, but the guy's specially ordered stove hadn't arrived yet.  So all cooking items were stowed away.  That was about the time Steve and I started dating.

I was thinking about this when I was standing in the line at the grocery store.  I saw these great enamel soup pots near the checkout.  Voila! What a nice gift to a guy who likes to make soup!   So I bought it for him, along with soup making stuff.   Now, I hoped he'd call me for another date so I could give it to him? 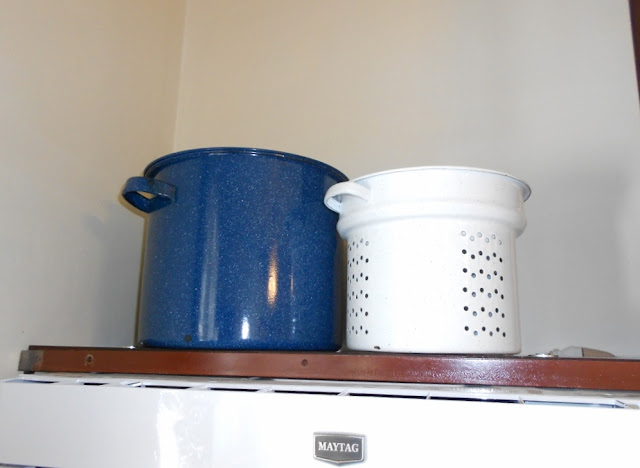 He did... he invited me over the next day to help him grout the tiles on the floor (my kind of man, what a date!)  and I brought him the soup pot.  He was pretty much speechless!   I think that may have been the moment he fell in love with me?   I knew I fell for him-----


Then I had to marry him to get that soup pot back! 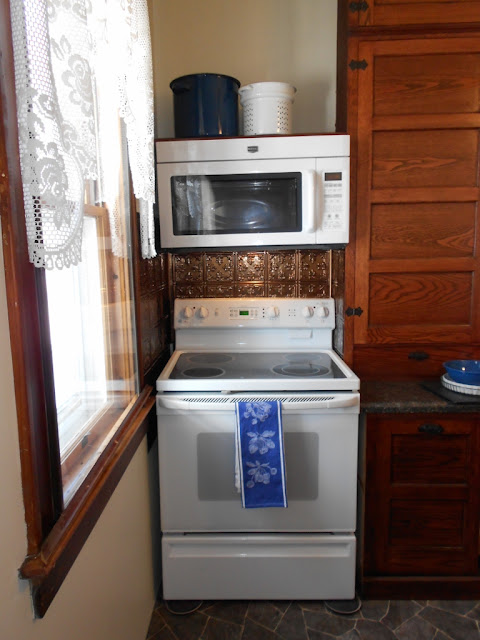 And we have been "simmering" ever since!

Posted by KarenInTheWoods at 9:03 PM