Oh Mr. Steveio the Mouse Master Man has caught two of them little meeces in his traps (one snap and one sticky)   But three of the other sticky traps had been moved around and disturbed.  So he loaded them up again with more peanut butter and reset the snap traps too.   We think they are coming in through the unused furnace ductwork somewhere they found an opening.  That is where we found lots of chewed insulation fuzzy stuff coming out of the duct up front.

Wish him luck, because the damage that can be caused by mice in an RV is just horrible.  They can chew through the insulation around wiring that can cause shorts or fires. They can chew stuffing out of built-in seating or padding around windows and valances which you would have to do a complete remodel to fix.  They can gnaw into the grey plastic water lines and cause leaks.. especially in hard to reach places for repair or replacements.

Using D-con is out of the question because once a mouse eats it, they sip some water and crawl away and die.  Don't want any stinky dead mice to crawl into the vents, walls, behind storage compartments and start to stink.  Ewwwww

I have one other thing we bought for the motorhome this week that I forgot to mention. For our house, I have a larger crockpot that is too big to fit in the cabinets of our motorhome.  We used it last weekend with Mel and Paula so I could do some Calico Beans.  But it had to ride on the floor next to the table enroute.

I told Steve that we should get a smaller one, but it still has to have a removable crock for refrigeration and ease of cleaning.  I don't like the all in one units where the crock will not lift out.  Had one like that years ago, and I was kinda glad I broke it.  HAHA

Lo and behold, Fleet Farm (the Man's Mall) had one on sale last week!   It's a Proctor Silex three quart crockpot with 3 settings, and a removable crock.  Plus it has a glass lid.  My big one has a plastic lid that looks kinda grungy and scratched up looking after all these years.  So Steve picked it up for us to add to our rig.  It is oval shaped and it fits nicely in a cabinet.  Smaller and more suited to 2 or 4 people. 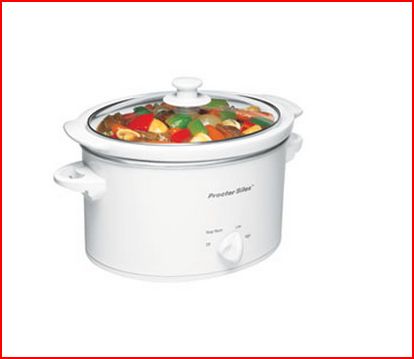 Many motorhome RVers will leave a crockpot setting in the kitchen sink, while plugged into the power and using the inverter to power the outlet.  So it can cook while you are driving down the road!    I have done this once in our last rig, and it sure smelled good.  We had supper all done when we got to the campground.  I am not sure the draw of this new one on low or high or the keep warm settings.  Don't wanna run out in the rain to go check the label.  My big one is 180-250 watts, so I am sure this smaller one will be less draw than that.   I am gonna dig up some good crockpot recipes for taking it along next time.

It's a dreary rainy Sunday here.... and going to rain most of the day I expect too.   Packer game won't be on till 7:30 tonight, so I guess I will wander down to the loom room and find some mischief to get into.