Motorhome Modifications - things to do on a rainy non-camping weekend

It's a stay at home weekend, with rainy skies and dribbles and splatters all around.  So we decided to stay home this weekend.  Got some projects in mind (besides housework, laundry, dishes, and cleaning...ugh)

Yesterday (Friday) Steveio got TWO shipments from UPS.  Just in time for the weekend! 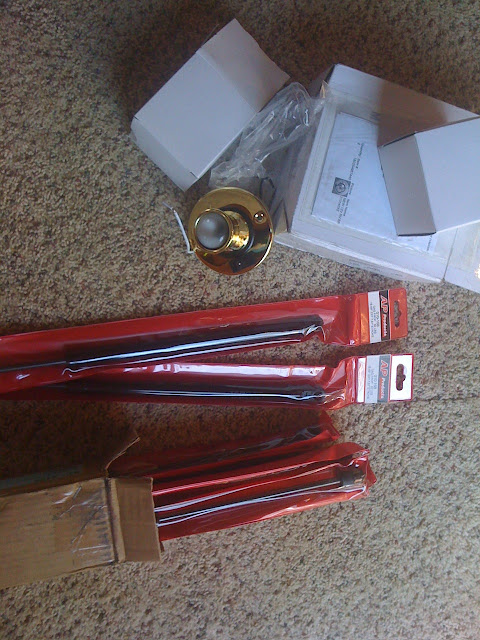 The first box contained 10 gas struts from Arizona RV supply, to put on all of our wider motorhome basement compartment doors.  Mel had given us some last time he stopped here that took care of our narrower doors, but Steve wanted to replace the ones for the wider doors which take 2 struts each.  After 15 years, they are failing, especially in the colder temps.  These were only $7.26 each strut and $10 postage to mail us all ten of them.  Not a bad deal!

When Steveio came home from work, his eyes lit up as he saw the boxes on the counter. Wheeee PROJECTS!   Before I could say *toot sweet* he had all of the struts installed on the rig!  He had them all done so fast I didn't have time to snap pics of him in the process.    So I went back out and made him pose again now as if he was just putting them in!  LOL 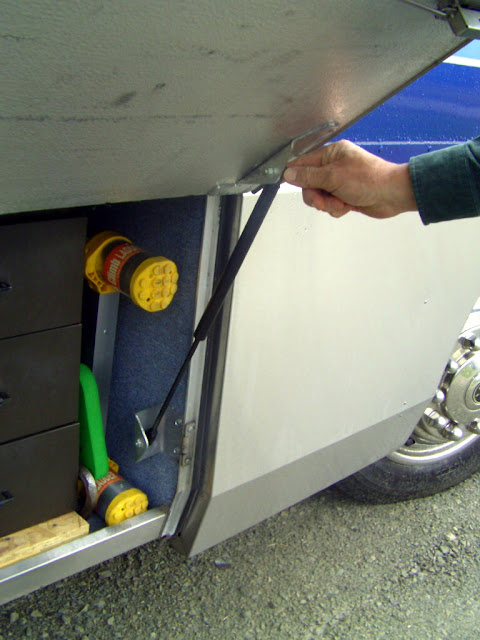 The other box was from a lighting place on Ebay. He had to wait for today to work on them --- the project is to install the two more 12 volt light fixtures we bought.

He examined the box of light fixtures, and then... then..... he popped a question.  Not THE question, he already did that 13+ years ago.    Can you imagine my delight when Steveio looked at the lights and ASKED for me to make him a template????  This is a guy who HATES templates!  (I think it's like some unknown person telling him what to do)    But because these lights are going in new places, not just replacing other fixtures, he wants to be soooo careful in cutting into the lovely wood cabinetry on our rig. He wants to be exactly sure of the odd shaped openings needed for these light fixtures.   So voila, a template is now made. 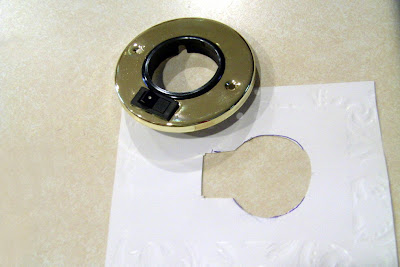 He then realized he doesn't have the right size hole saw, so off to town he went, while I am typing up this blog. So while I am waiting, I will type the explanation on why we are adding MORE lights to a rig that seems to be loaded with light fixtures.  Off the top of my head, there are 30 different light fixtures inside and 8 underneath and 3 on the outside.

See..... a while back we bought five of these brass 12 volt light fixtures to replace the * hockey puck* halogen lights that were energy wasters and too hot in temps where the glass lens would loosen up and fall down on your lap, burning you in the process if you were sitting underneath it!     A little camping friend, Autumn, got burnt on her leg one night.  That was it, out they went----

So we ordered five of these swivel brass type lights and replaced them all.  They work well as 12 volt lights, and are aim-able to put the light just where you need it.   Steve has started adding LCD bulbs to some of these lights, one at a time, as the bulbs are quite expensive.    Here is a pic of when we replaced the other five light fixtures last year: 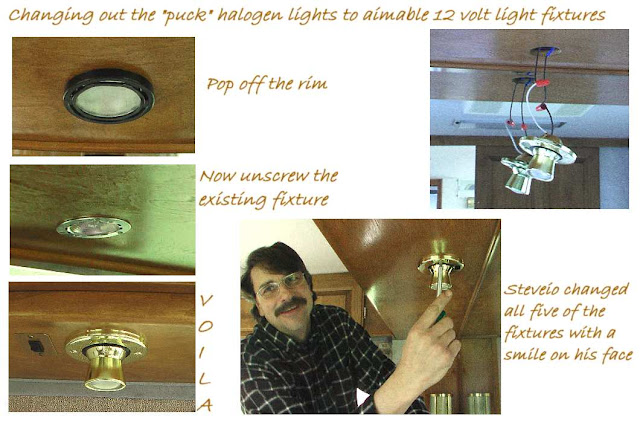 Jump forward to NOW .....  We decided to buy 2 more of the same fixtures, because we want one that shines near the entryway instead of fumbling for the ceiling mounted fluorescent light as we come in the rig, in the dark.  We want it within easy reach of the doorway entrance. Plus, where we are placing it, the light can also shine down onto our dining table area when eating inside.

The other light is going over my passenger seat when the seat is swiveled around to face the lounge area of the coach.  When I work on my fiber projects, I don't have any light over that chair.  There are two over the couch on the street side of the coach.....    and one on the curb side over Steve's chair, but my chair was sorely lacking in illumination.

If Momma Ain't Happy, Then Nobody's Happy.... right?
Okay, he got back home and we started on the lights.  Yes, he used the template! 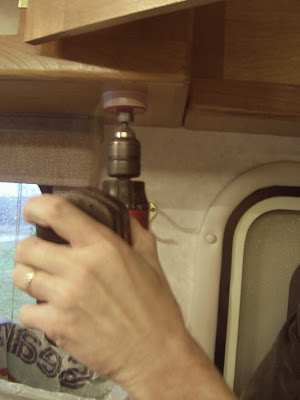 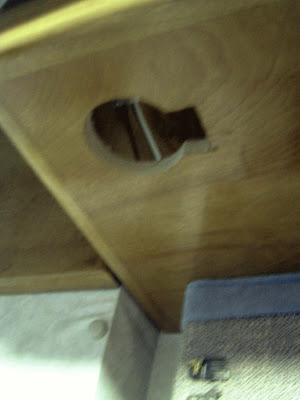 A small panel was removed from inside the cabinet to access the wires.
The light is now in place, with the switch reachable from the door, and able to aim over the table, too. 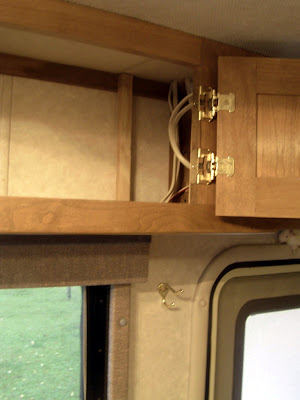 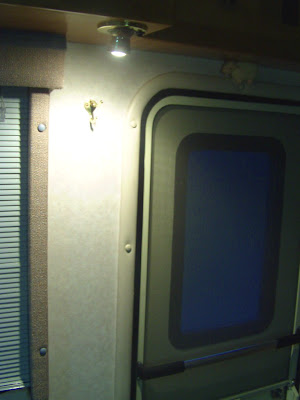 And here is the one over my passenger seat, and all three lights in a row down the line of cabinets
(the center one was already there over Steve's euro chair) 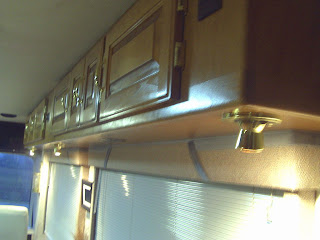 So we finished up the lights and cleaned up our mess, vaccing up the sawdust and putting away the tools. It was raining raining raining all afternoon.   Guess it wasn't too good of a weekend to go camping.


And now that is done, on to the BATTLE OF THE MICE!   Last week we were too confident that our moth balls scattered under the rig were doing their job.  Steve also put a few well-placed mesh sacks of mothballs were stowed in our compartments.  THIS week, we have MICE!

We went out to the motorhome on Thursday to drive it over to empty the black and grey tanks at the Oconto dump station, and noticed tiny little mousie poops on our DASH!  There is no food in the lower cabinets or dog food in the drawer.  Only canned goods up high.   But we found some chewed foam insulation around the pipes under the cabinets.  And some chewed insulation under the dash near Steve's seat.

So we picked up eight little standard regulation mouse traps and a jar of peanut butter.  Set em all on Thursday night  and held our breath.   Well.. those little stinkers ate off ALL the peanut butter and didn't set off a single trap!   ACK!    Time to get smarter than the mice?

Today Steveio picked up four of the sticky traps and is putting a dollop of delicious peanut butter in the middle of the sticky area.  Heh heh.  PLUS he reloaded the spring type Victor traps. We pulled out all the drawers and set these inside the cabinets and one set up front where we saw the mouse poops around Steve's seat.  We will see who wins this battle? 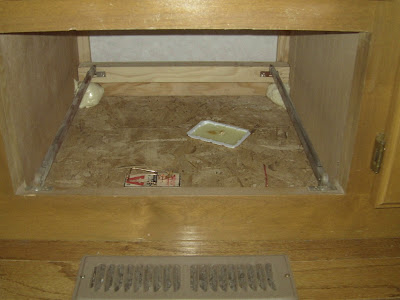 If this does not work, we will have to get Fred over here.  He is the Mighty Mouse Hunter of all RVs!   We witnessed his endless tirade on them little buggers a couple years ago on our way to Mount Rushmore.  He got them little buggers, even TWO AT A TIME in one trap!   He was checking those traps every hour, and finally outsmarted them meeces!    Now THAT is a Mighty Mouse Hunter! 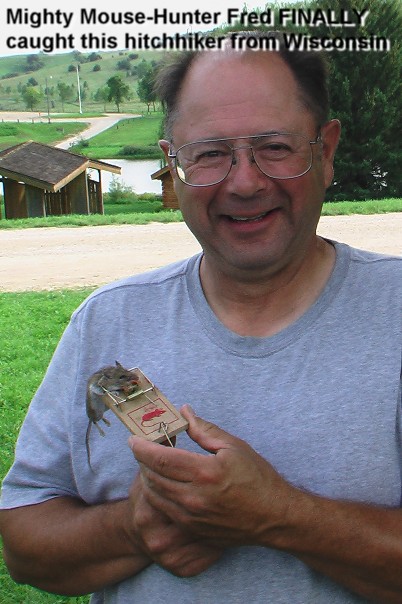 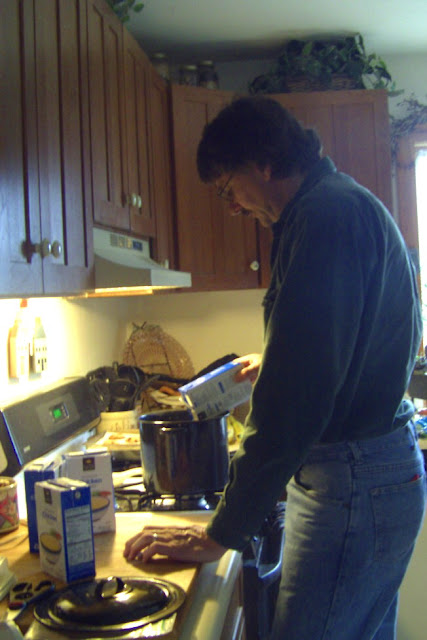 The house smells soooo good with a pot of soup simmering on the stove.  Yum!
He chopped up the veggies and added some cartons of broth,
I chopped up the chicken and did the seasoning.
At the end we added some noodles and let it simmer.
After supper, we lit a fire in the fireplace, and are now sitting back to enjoy a pizza and finish up this blog. It's still raining outside, but we are inside and cozy and warm.  We have some Netflix movies to watch because everything on tv just seems like repeats or dumb stuff, not to mention all the political commercials barbarding us every few minutes.  Will November 2nd ever come?
We will see what tomorrow will bring---  Perhaps a Packer win over the Vikings????
.
Posted by KarenInTheWoods at 7:17 PM