When A Door Closes - We Just Add More!


We've made it through that miserable stretch of hot humid weather. Today is a gorgeous summer day in Wisconsin with temperatures only into the low-to-mid 70s. The humidity has dropped. And things are starting to feel normal again.

In between family commitments this weekend, we were able to cut out an old rickety door that leads to the doggie potty yard to the South.   We ordered a second door that matches the one we put on the north side of the She Shed. It is insulated and has a 15 pane grid between themopane sealed glass panels. It will let in a lot of light, but has low E glass to help protect the items inside, since it is facing South.

Steve cut out the old framework and added a new header to make sure everything was up to code.  It might not be required on a non-loadbearing wall, but he put one in just to be safe. 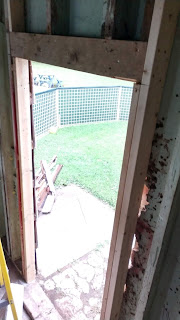 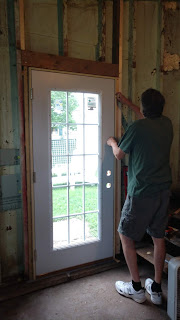 In no time flat he had the new door plum-d and shimmed and into place.  This one went quite easy, and he will trim out around the outside once the sun moves to the west and he can work in shade. 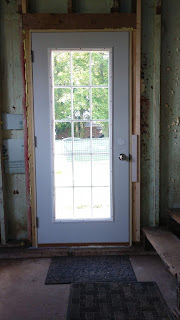 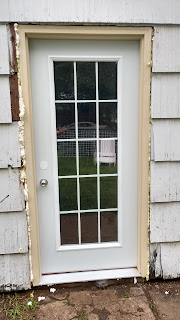 Now that we have the new door on the South wall installed, we also put up an old fashioned screen door. We bought the wooden screen door and I painted it up so it would look ever so cute on this National Folk Farmhouse. I will add some curlicue bric-a-brac pieces to the corners when I find them somewhere. 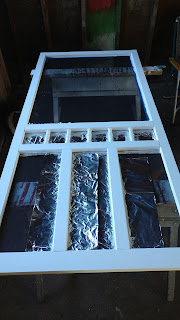 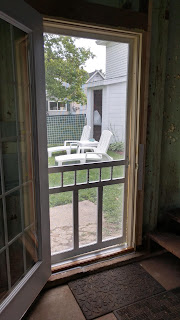 We installed the screen door into place and then we added a nice old fashioned noisy spring so it makes that obligatory sproinging sound and the big "whap" as it slams shut.  Nothing says "SUMMERTIME" as well as the sound of the banging of a screen door. We had one similar to this on our log house out on the river years ago. I just love it. We also added a door sweep to the bottom to keep the bugs out. It's just one more step to making my She Shed a pleasant place to hang out. 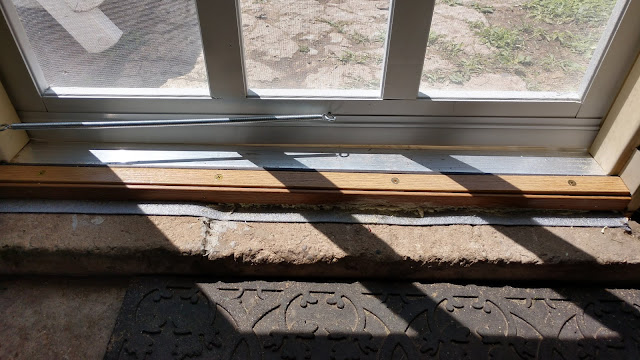 This afternoon, Steve has started building the temporary wall along the east set of windows. The temporary wall will hold the roof up, level and even while he works on the window opening. He will be adding a big header beam, up to code, and then we will install two insulated floor to ceiling French door panels to act as windows. 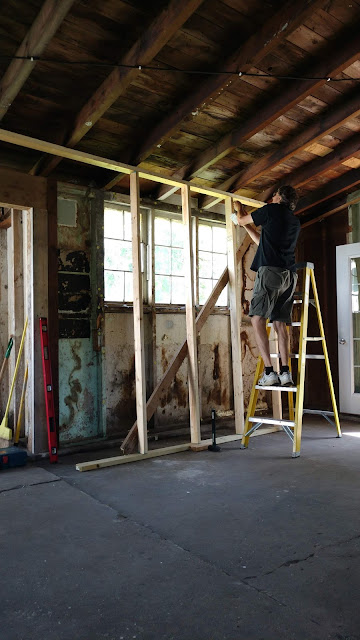 It's going to be exciting to say the least.

I keep looking out these rough and rugged single pane garage door windows at the beautiful view outdoor in our backyard facing to the East. I can't wait until someday when they are the full complete floor-to-ceiling windows to enjoy the entire view. 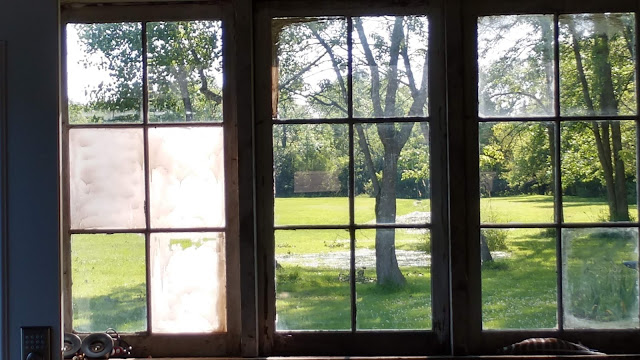 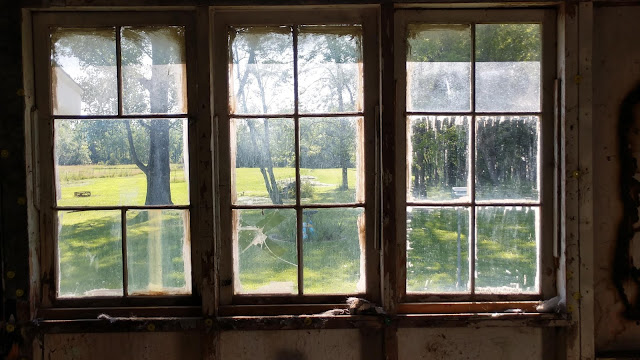 Now to catch up my blog on some of our past projects we have done on the house during my hiatus of not blogging for over a month.  We were busy!

This is one of the projects we worked on:

Since our home was built way back in the old days, when boards were really two inches, the spindles on our front porch are also made from two inch lumber. They are a sturdy 2 inches by 2 inches.

When we bought the house there were a number of missing spindles. We moved a few around to make it at least visually symmetrically balanced but we had big gaps. We decided it was a good idea to finish filling in the gaps for now. Somewhere down the line when we replace the entire porch railing, it will have to be newly created up to code and made taller. For now it's grandfathered in for the height it is at.

Now we were able to cut spindles that were actually 2 inches by 2 inches by running these old boards through the table saw.  Steve cut them up and I got out my little saw horses and my paint roller and went to work. Everything got two coats of paint on all four sides. 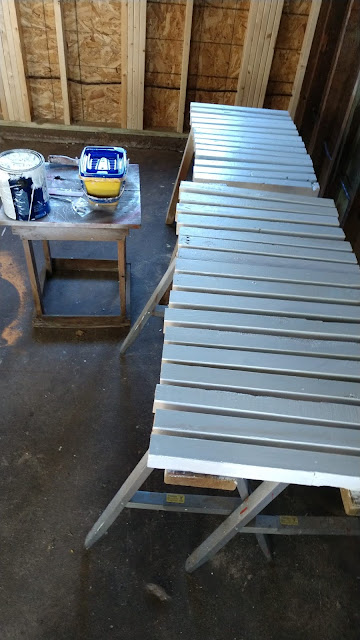 Soon we were able to fill in all of the gaps.
Using a little spacer,
we placed them in as symmetrically as we could. 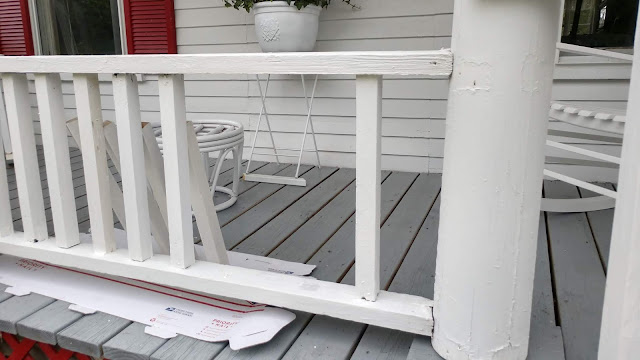 Ahhhh that looks so much better now!!

Almost done in this pic.
Just a few more to do on the side
by the new little trellis. 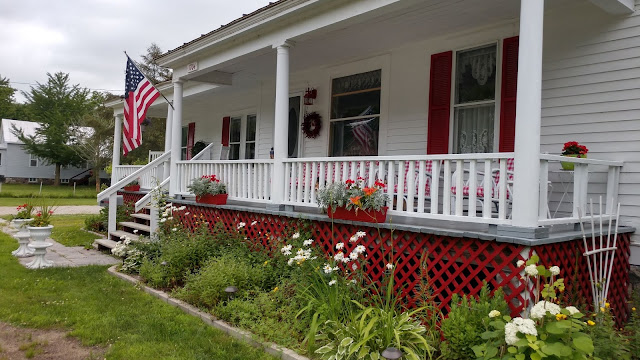 The added benefit is that there is no chance of some sassy little dogs deciding to dive off the front porch from in between the missing spindles.  They get a little excited when people walk by, or bikes riding past the house...  so we keep leashes on them while sitting out there, to grab them just in case. 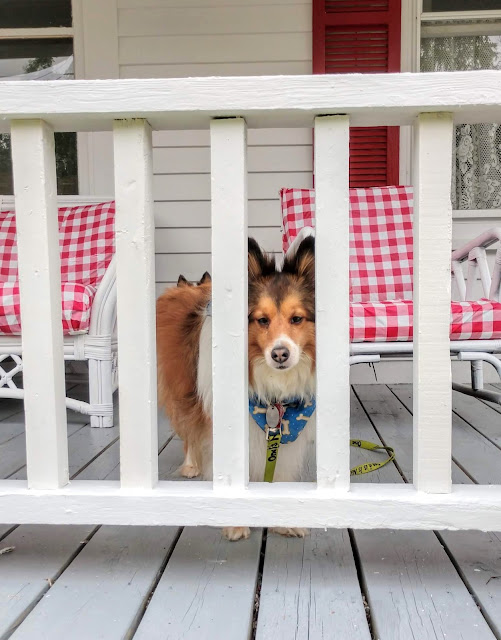 Finnegan kind of looks like a
cow in a stanchion.


So that was it for the newest projects to the front of the house. Since we are not allowed to move the front steps over to line up with the front door (per a new city ordinance that won't let them be constructed within 25 feet of the road)... now I will paint the steps where they are, and just leave them for now. 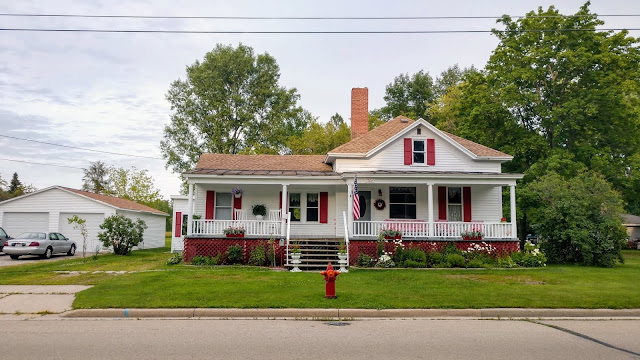 The front side of the house should pretty much be done.


In the backyard we did a little something too.  We have this white portable metal fence set up from seven mesh display panels. We got them from a grocery store that was going out of business back in Chilton. The panels are wire tied together to make a portable play yard. There are no fence posts into the ground. It just sits there and we can move it around a little bit in either direction to mow the lawn that grows up around the edges. Our dogs don't jump on it and don't lean on it, so it just kind of sits there in a big semi circle. Each of the ends just kind of butt up to the corners of the house. It makes a great way to surround a small area of our back door for a potty yard.

We discovered one problem though. Our very nice neighbors have two dogs. One who is a very large Great Dane named Oliver who is just under a year old. The problem is that if our dogs are out in their little potty yard, and one of their teenage daughters attempts to bring out the Great Dane Oliver on his leash for a potty break, our dogs bark bark bark at him!

Oliver then proceeds to rush over into our yard to the fence to get nose-to-nose (in a friendly manner) with our dogs. The problem is that he is dragging their teenage daughters, literally, on their bellies, across the lawn from their yard to our yard. Dog Surfing!!!

We feel so very bad about that! We tried to notice as soon as they are coming out to let out their dogs in their yard on leash, we try to get ours corralled up and rushed into our house quickly. But that doesn't always happen. I feel so bad that the two daughters who are getting the rough end of the deal. We've apologized to them and try to make our best effort to keep our dogs from barking, which is enticing their dog to drag them over here.

Finally we came up with this next best idea. We bought a roll of four foot high screening that we found in the fencing department at the local home improvement store. 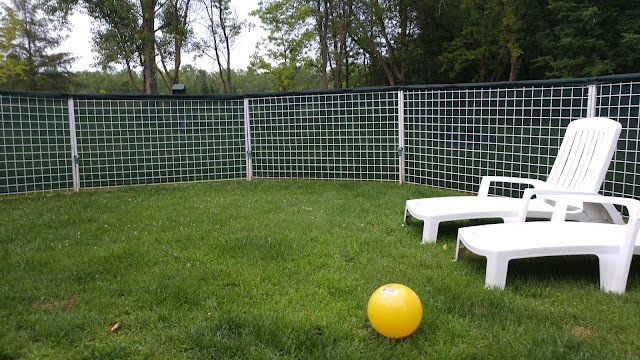 The grandkids were over and helped us roll it around the outer perimeter of the paneled in fenced area. We wire tied it down onto the mesh and it really seems to be working.

Our dogs are less inclined to bark if they don't see what's going on next door. We all have very large yards so ours don't really hear them --- it's only when ours see the dogs that they start barking.

It's been up for a week now and I really think it has helped. 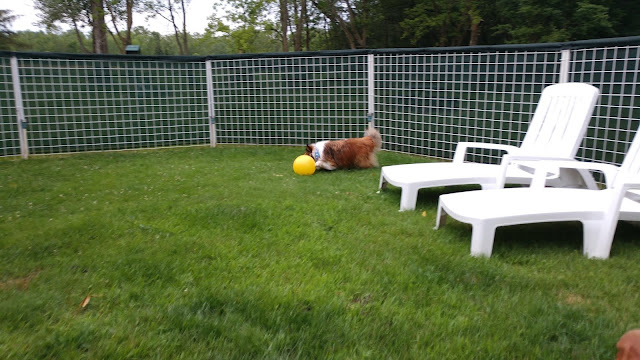 Our sassy puppy hounds don't get as distracted now when they are out doing their thing. For now this will work. Maybe later we will consider putting up a permanent privacy fence in a small area. We could never afford to fence in our entire yard which is 2 1/2 acres. But this might be a good alternative for now. 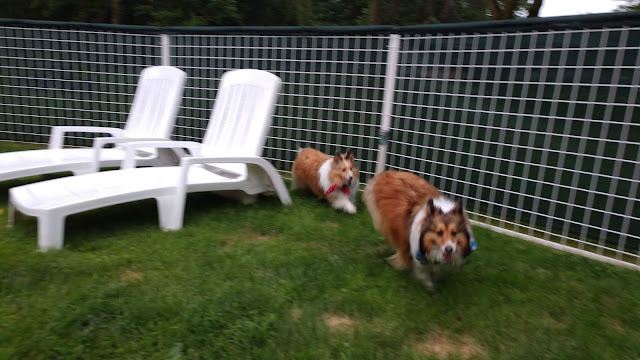 Here is a big backyard shot from the south side of our property.
So you can get a good idea of the layout.
Then it extends to the east for another 600 ft or so to the right of this photo. 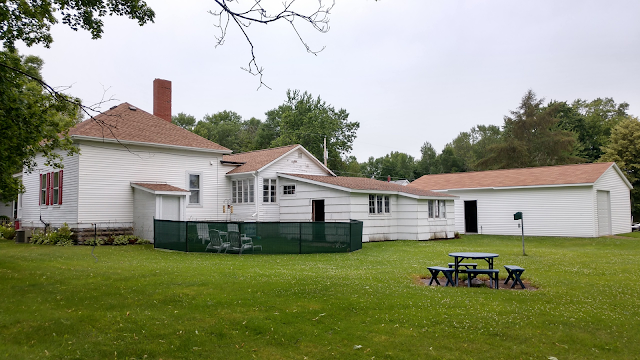 Ahhhhhhh
this is our Big Backyard! 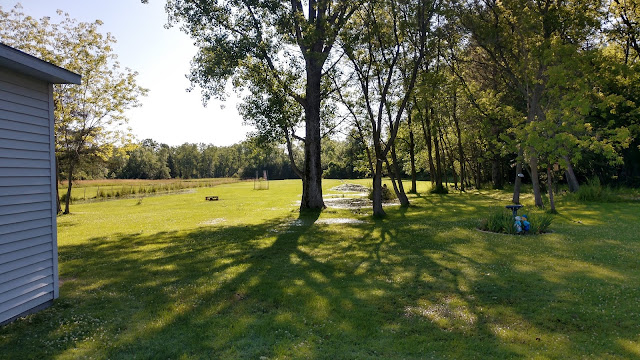 I think it's time to get this blog done and get some supper cooking. It's so beautiful out I think we are going to do barbecued ribs on the grill. We stopped at the local truck farmer who sells vegetables on the corner and stocked up on good Farm Fresh veggies. I ordered a bushel of beets to pick up tomorrow.  I can maybe make some pickled beets in my canning setup if the weather stays cool.


Posted by KarenInTheWoods at 4:20 PM