Asking for a special prayer request
for someone close in our family
as we go through some difficult times.

Instead today I will focus on some of the other projects we are working on.

Yesterday we were able to get the OSB board up around the newly framed wall. Steve then got some leftover tyvek house wrap from the neighbor so we didn't have to buy a hundred foot roll. 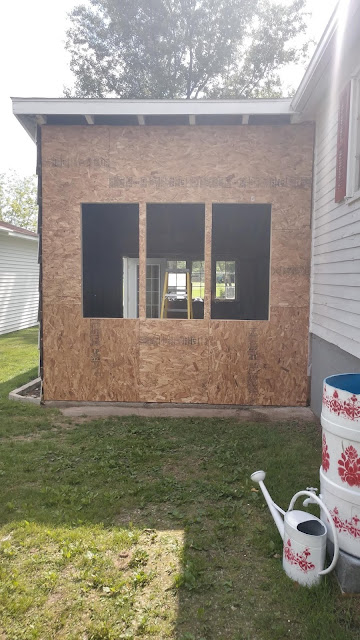 The weather got way too hot and humid to be able to do any more work, so we took a break.  Soon we can start closing it in by installing the windows, and then soffet and fascia around the roof line. 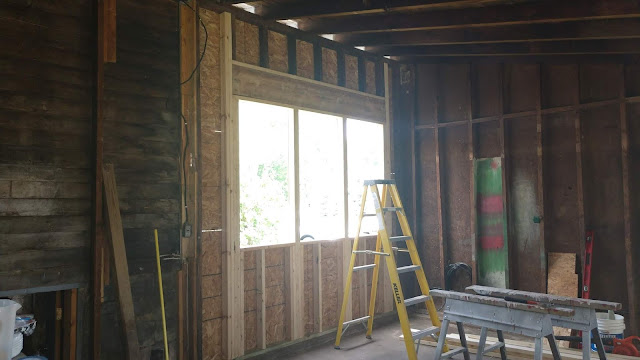 In between all of this She Shed work we have been messing around with other projects. So here's one of the other things we've been working on because I'm trying to catch up the blog.

I know a couple blogs back I talked about putting new handles on the kitchen island so it matched the rest of the cabinets. Steve also dressed up the island with some things you don't see. We converted two of the cabinets on each side of the stove with pull out units called Rev-A-Shelf. One is for our kitchen trash and the other one is for our recycling. 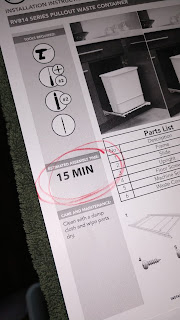 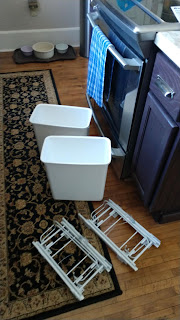 Although the instructions say 15 minutes to install, those buggers took us probably half of the day. We've installed these before at our other house and it was never this difficult. I think they're making them cheaper with thinner metal, they flex as you screw them into place. You'll have them all measured accurately and marked correctly, and then once you screw it down, the metal of the actual frame unit twists. Very frustrating!! 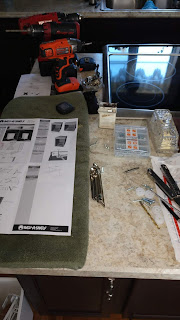 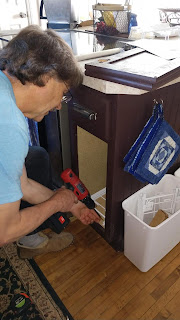 We shimmed it and corrected it and fiddled with it until both units would finally slide in and out with ease.  Whew.... what a job! 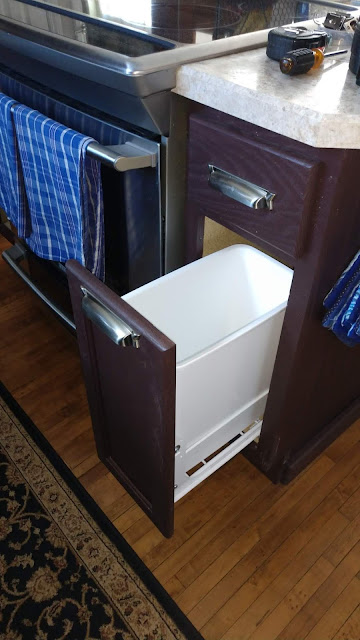 Of course, the island was not original to this 100 year old national folk farmhouse kitchen. The previous owners made the island out of five pieces of store-bought cabinetry, stacked around the fancy dancy stove they put in the center of the island. They added beadboard panels to the sides as well as an electrical outlet. On the top they put a big piece of faux carrara countertop. Then they added a beautiful stainless steel hood vent over the top. More on that later.... 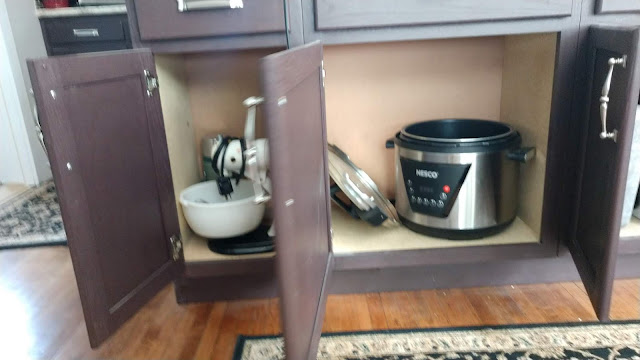 Does that stop my Steveio? No it doesn't! He cut some nice pieces of wood for shelves and some strips to hold them into place. Then we went around the rest of the island cabinets and figured out which appliances went where, determining the best positions. 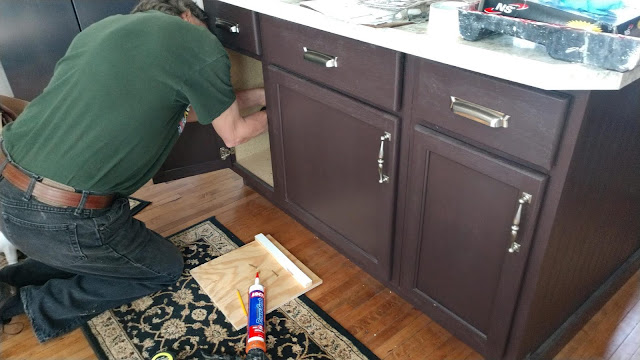 He put in the shelves according to what heights I needed. Now all of the appliances are stowed away and can be taken out easily to set on the island when in use.  What a guy!!! 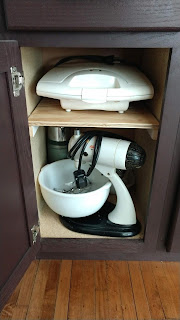 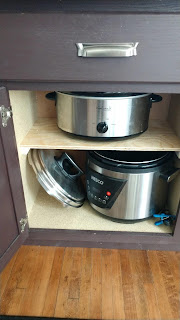 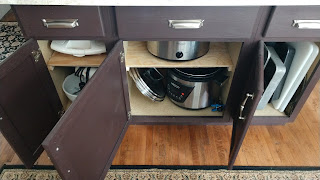 Oh, back to the hood vent. It's a beautiful hood vent and works very well during cooking as far as the vent portion goes. But the four lights on the underside leave a lot to be desired.  They aim downwards but don't shine well onto the cooking surface and surrounding island prep areas. 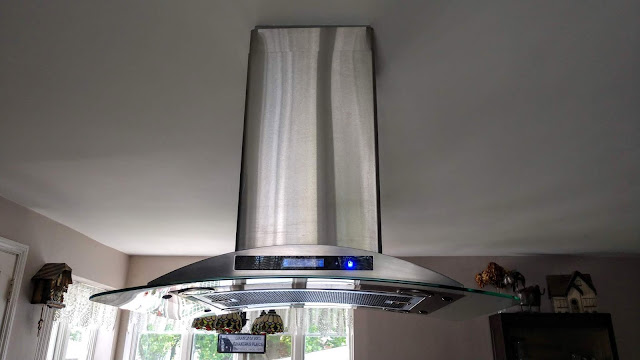 They are a funny bluish cast LED color and not bright enough to illuminate the work surface area. Especially evening cooking or early morning, the lack of light is frustrating. We need to turn up all the other lights in the room to illuminate the food prep and cooking area on the island.

I googled the brand of vent hood and everybody else had the same complaint. I looked up the company website and the only replacement lights they sell are the exact same 2 watt cool blue LED lights. I wanted something warmer white and brighter.

But in one woman's review, she stated that she was able to buy little replacement LED discs to put into the individual light fixtures. She even gave the link to the website where she found them.  The only drawback is that they needed to be soldered into place.

Well that's no problem, Steve is very good at soldering. So I went to the website and placed the order. I didn't see the two little words at the beginning of the listing title saying "10 pcs".  Instead, I just went to the drop-down menus and selected "3 watt", then I selected from the next drop down menu "Warm White". The price was under $7 and I thought that was okay, I selected quantity 4 with free shipping. Done. 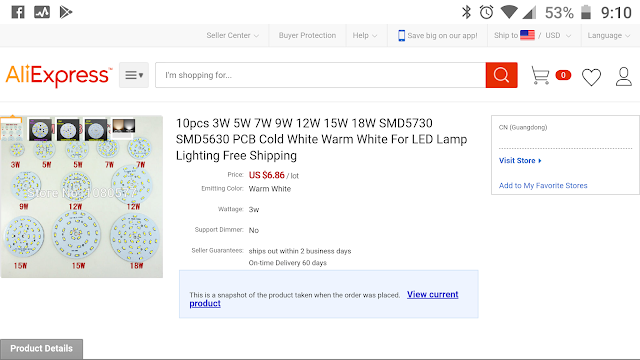 Little did I know, that I actually ordered 4 lots of 10 LEDs!
That makes 40 lights!!!
Lol lol lol 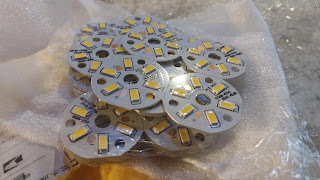 Oh well, the price was still reasonable compared to the exact replacements on the manufacturer's website, and the lights came in about 3 weeks from Hong Kong.

Steve disassembled one of the old light fixtures and I held it steady with a pliers. He was able to remove the old light connections and attach the positive and negative wires to the sections on the new light disk. 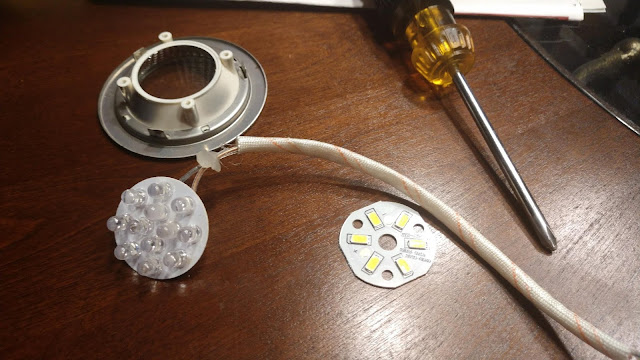 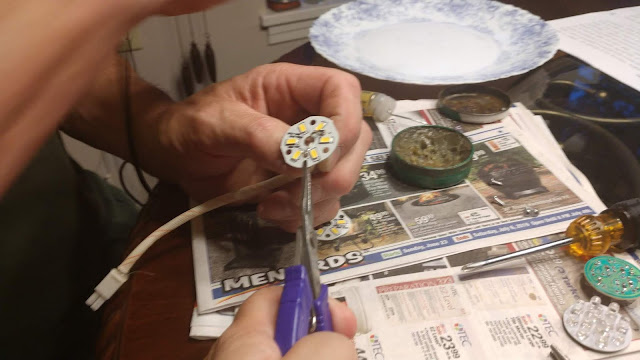 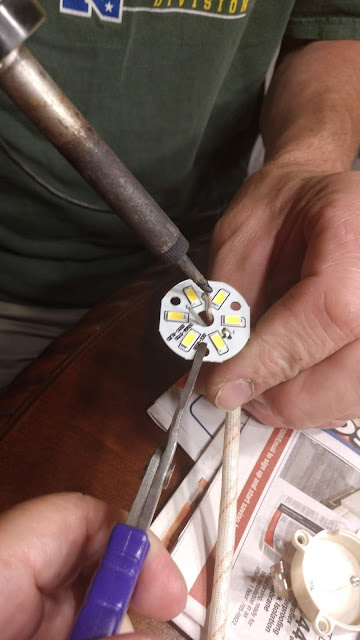 We plugged it in. It was amazing! 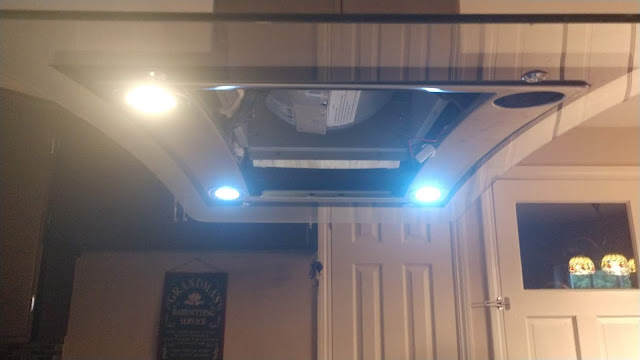 The two lights in the back in this photo are the older bluish ones. The one to the foreground on the left is the newer bright one... and the hole on the right is while we were working on the second light. 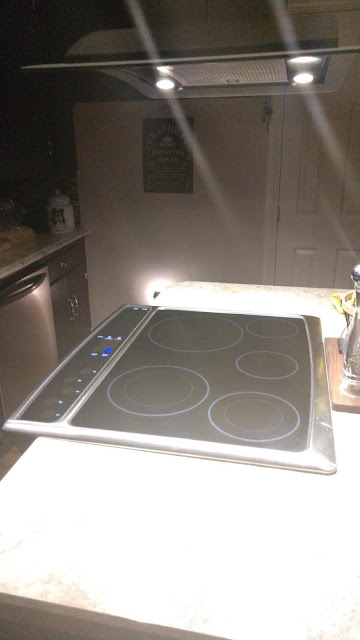 Soon we had all four lights replaced. it was amazing---- illuminating the cooking area with warm bright light that really made a huge difference. 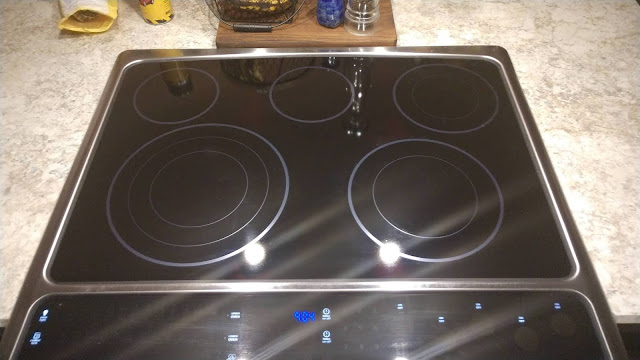 He now has 36 more lights disks to do something creative with. He had a bright idea and started soldering them one at a time into the halogen fixtures out in our motorhome. Soon all of the under counter and under cabinet lights in our motorhome will be changed over to LED.

That's enough for today's blog. Time to get a move on here.

I am babysitting our Little Beetlebug Claire, the youngest granddaughter for the weekend. Steve is taking care of family things and we would appreciate any and all kind thoughts and prayers.

Posted by KarenInTheWoods at 2:26 PM