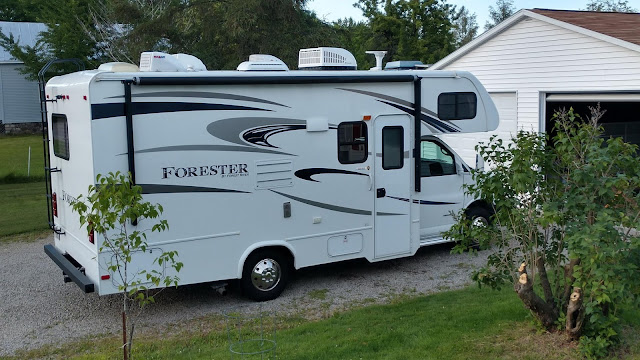 So do you think we traded in our big Safari Diesel Pusher
for a smaller version?

Decided to go back to gas?

Our oldest daughter and her husband Waylen decided they wanted an easier way to travel with three children and two dogs.  What a great choice they made! 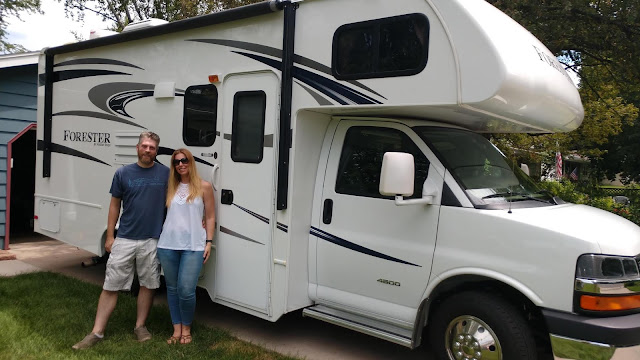 They already own a travel trailer that they keep permanently parked on some private land. So they are not newbies to the rving lifestyle. They both have been camping in one form or another their entire lives.  But they did decide that when traveling with the family, it made more sense to have their bedrooms and bathroom and kitchen facilities going right along with them.


As opposed to hotel rooms
and restaurants
and stopping every 5 minutes
so one of the three kids can use the potty?


They did a lot of research and were very careful in their buying choices. They wanted something not too old not too new, but with all the bugs worked out. They looked at all different choices of floor plans and features, amenities and benefits, and made a decision based upon their own needs.  They wanted enough storage, good cargo carrying capacity and enough seatbelts for the two older kids and a place to tether the youngest's car seat facing forward. A queen bed was a plus, and a bath that is accessible even with the bedroom slide in during travel.  They found it all in a rig the right size to fit their driveway. 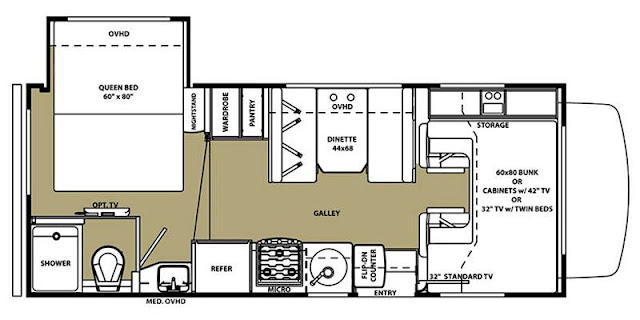 They found exactly what they were looking for from a meticulous private party seller.  They went down last weekend to inspect it thoroughly and test drive it before making up their minds. They were very pleased with what they arrived as a final decision and made the arrangements to pick it up on Saturday.

Of course, their pick up arrangements involved us!

While the two older children attended a different family function, they took the youngest, Claire, along with us in our car. We drove down to the other side of Madison, Wisconsin to pick it up. After a positive walk-through and a exchange of handshakes and keys, it was time to hit the road.

I followed along behind in the car while Steve rode with them on the first leg of the journey.

After a nice stop over for lunch, which they treated us, it was time for the second leg of the journey. I got to ride with them in the motorhome while Steve followed in the car behind.

It was a beautiful trip and Waylen drove the rig like a pro. He even made it through tons of construction and orange barrels like a veteran RV driver.  We wound along through the green Wisconsin countryside on a sunshiny day of summer joy.

They decided to play a little trick on the two older children. The children had no idea what their parents had purchased. So while the two older kids were still at their family function. the parents reached their home, and quickly loaded up some of their gear for an overnight.

Then they drove the motorhome over to park in our driveway at our house. After that, they went and got the children from their other family event.

Innocently, the family decided to ride their bicycles over to our house to come for a visit. Littlest Claire had stayed at our house with us so the other kids were just assuming that they were coming to pick up Claire--- who was being babysat by Grandma and Grandpa. They had no idea that that big motorhome in the driveway was going to belong to them!!!


Here's a little video clip of their surprise.
It was so cute:


The kids were told they could look inside of the motorhome because it belonged to some friends of ours who were visiting. 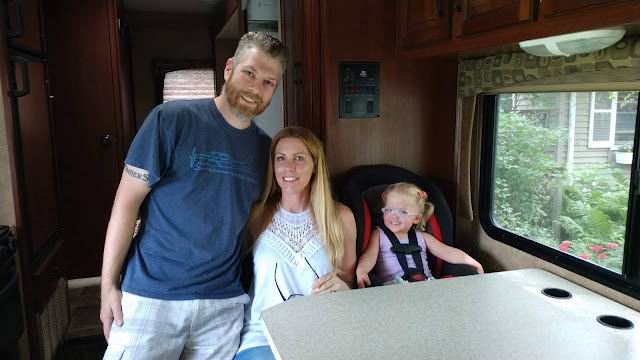 Once they were inside and looking around, Clayton was remarking that those people had a blanket just like his! hmmmm??

Of course when they realized that the motorhome was REALLY theirs, they were greatly surprised! Clayton exclaimed that his parents had "pranked him"! 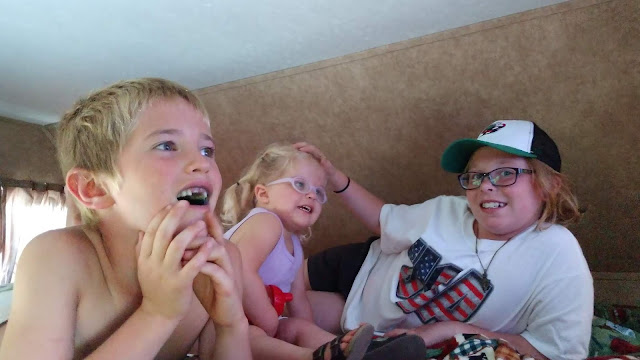 The kids explored every nook and cranny of their new RV.  We made the camping experience complete by rolling out the awning, and setting around in lawn chairs. Sitting back and admiring their choice, and the sleek clean new lines of their beautiful motorhome. 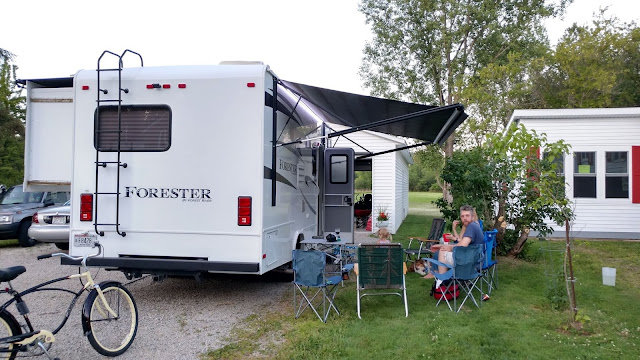 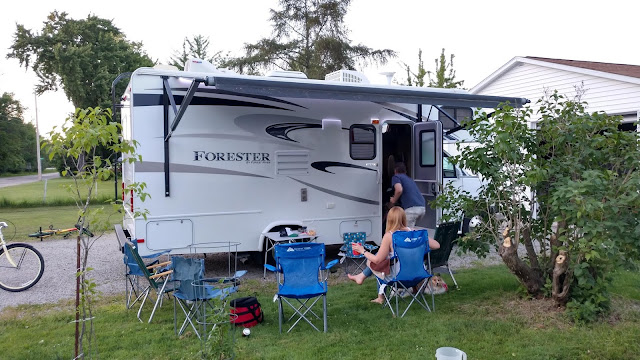 We topped off the evening of camping experiences with lighting a campfire and making s'mores. 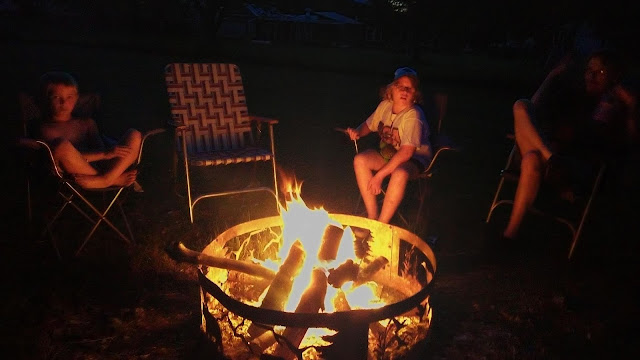 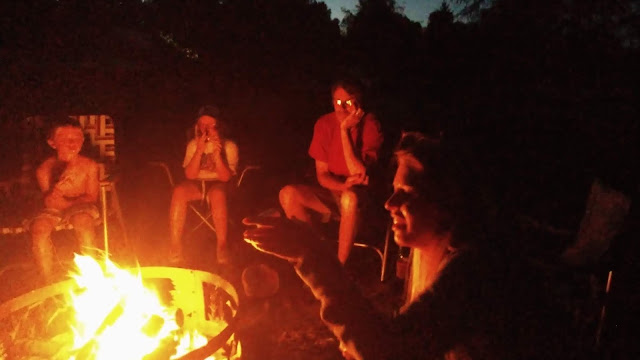 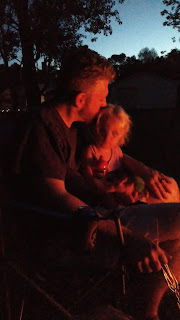 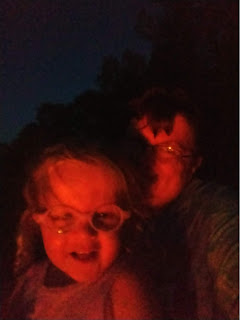 Have you seen this new way to make S'mores? Instead of graham crackers and chocolate bars, you put the toasted marshmallow between two fudge stripe cookies!!! What an easy way to make s'mores where the chocolate is evenly distributed around the marshmallow and held firm with cookie on each side. Melty fun! 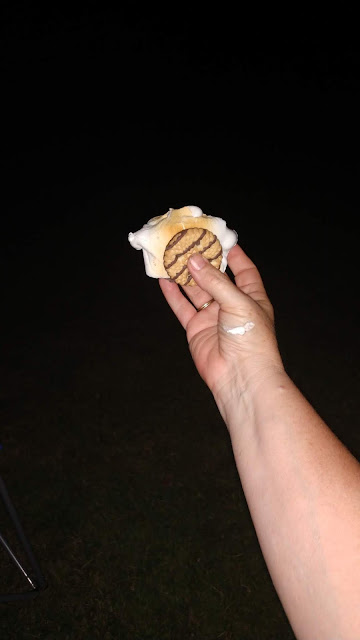 Little Claire, by the light of the campfire,
thought they were delicious. 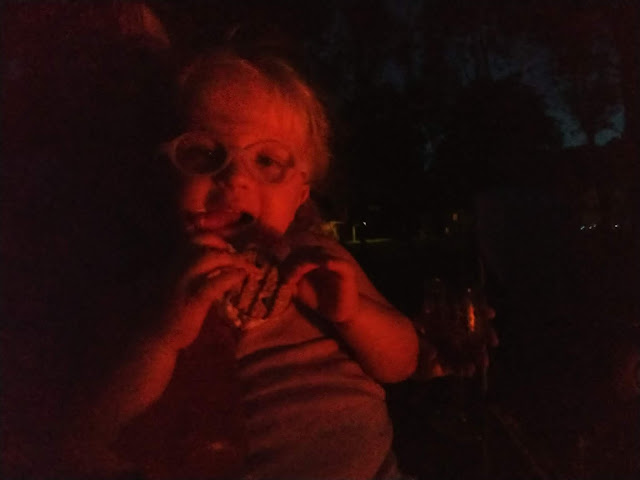 We sat around the fire, telling stories, and singing old camping songs. The kids were singing line after line as we taught them the songs from our own childhood.  We looked at the stars, the kids found the Big Dipper, and the almost full moon peeked out over the trees in our woods. 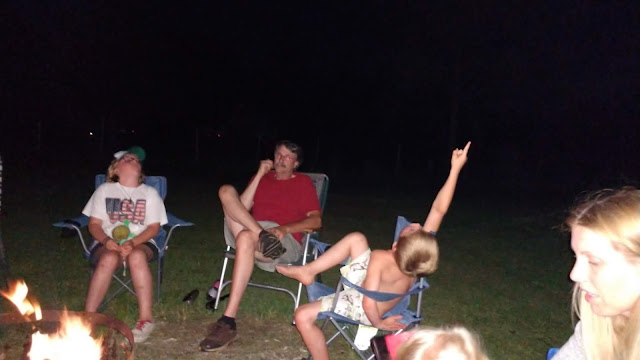 Staying up way too late past their bedtime, they finally tumbled off to bed. Erin and Waylen got to enjoy the peace and quiet of their motor home after the kids were all snuggled away in their sleeping spots. The ;parents sat up playing cards and enjoying their new purchase. Awwwwwww

Early in the morning, the littlest camper was wide awake. Of course, her daddy brought her into the house to come snuggle with Grandma and Grandpa for a while. The two older kids got to sleep in. 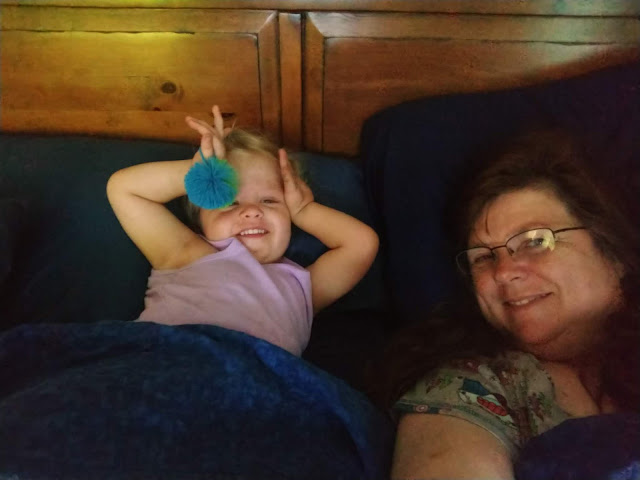 As the other lazy heads got out of bed, we enjoyed some coffee and donuts and fruit on the front porch.  Clayton took this picture for us.... 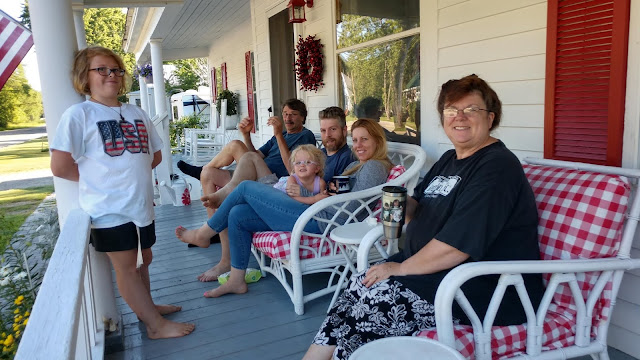 So we took a picture back of him.
Little Claire went to work watering my flowers. 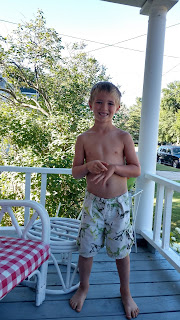 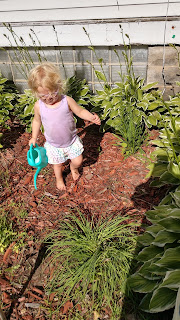 Clayton helped Grandpa spread some more grass seed on the two large bald spots in the front yard. They are leftover spaces from when the previous owners had two very large trees taken down.  Soon the grass should take over and fill in the gaps. 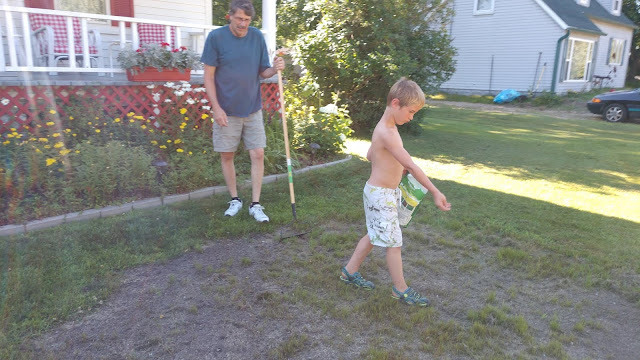 After a quick slapdash and polish around inside to put away their gear, it was time to read a couple stories and play a few games while the parents got the rig road worthy.  I gave them their own copy of Brown Bear Brown Bear to keep in the motorhome. A family favorite. 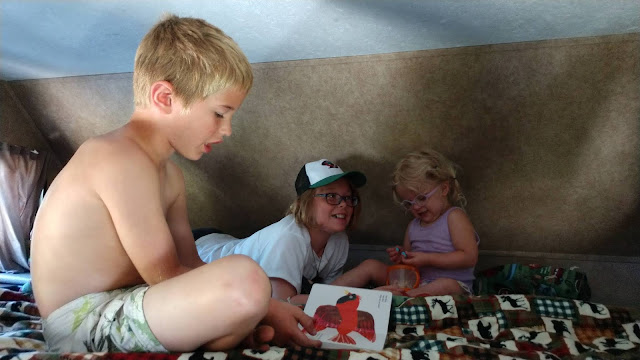 They packed up their rig toot sweet, and decided to head out to a nice beach 50 miles up the shore of Lake Michigan. It was going to be a hot muggy day. They were going to day camp in the parking lot a bit, play on the beach, and make a little lunch in their cute little kitchen. 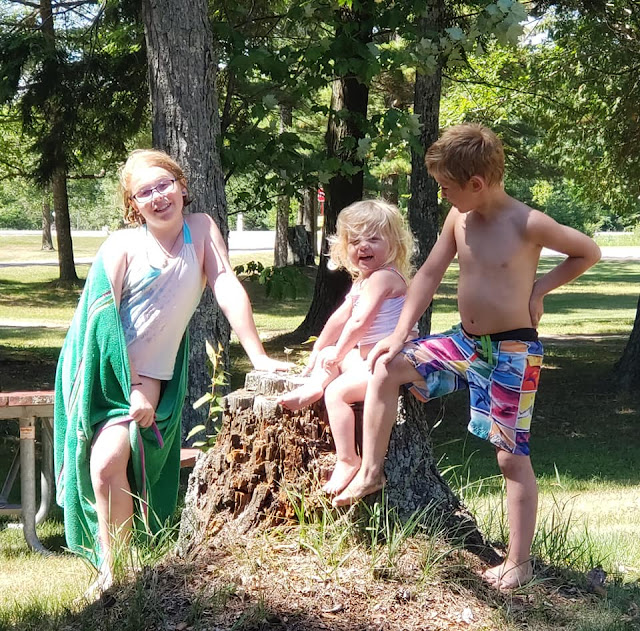 Sooo much better than cramming three wet kids, two grubby dogs, a pile of sandy swimming suits, leaking ice melted coolers and soggy leftover lunch stuff back into bags and totes to drive back home 50 miles in a car.  Nope!

In their motorhome, Claire could take a nice nap while the older kids played in the park. Then they could change clothes, have a nice lunch, put the leftover food back in the fridge and relax in the shade before heading home.  Everyone clean and dry and comfy with enough room to spread out and enjoy the ride.

May the memories start to build
May the adventure begin
May the roads ahead be free from troubles
as you start this new chapter. 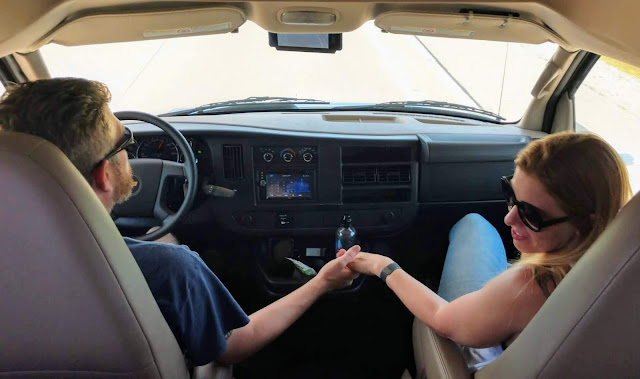 Posted by KarenInTheWoods at 10:08 PM

Labels: 2015 Forrester motorhome, camping at Grandma and Grandpas, reasons to buy a motorhome to travel with kids