Let There Be Light - Windows - Steps - Beets - Dogs and Fish

Life has been a flurry of grandchildren visits. We are so blessed to have our grandchildren nearby and able to watch them to help out the parents when the need arises.

Here is a YouTube video clip of our grandson Mason catching a monster fish when he came to spend the weekend:

We've been having so much fun alternating between the grandkids' visits, working on projects with them, and taking them places for some fun.

I love the sounds of clump clump clump up the front porch steps and a bang bang bang on the door as I look at their smiling faces shouting "Hey Grandma and Grandpa, we're here!!!"

One of the items we have been meaning to get done on our National Folk Farmhouse is to add some exterior lighting. Especially around the garage. We decided to install some motion flood lights on alternating corners of the garage. That way the bulbs can aim in each direction and completely cover all four sides of the garage.

We picked up some motion-detecting units and some LED flood bulbs. Steve got to work mounting them up in the corners of the eaves on the garage. 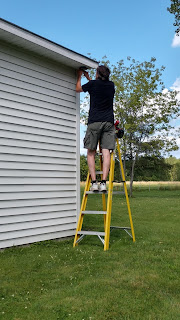 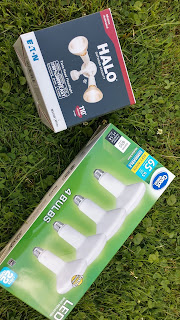 I know motion detector lights are not the most beautiful, but we did manage to buy white ones that will kind of blend in with the rest of the garage trim, soffits, and fascia. 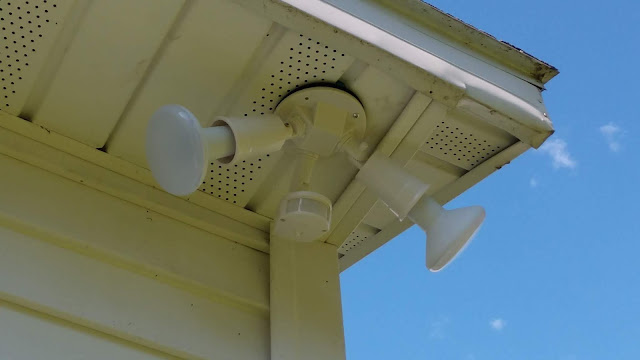 We waited anxiously for the darkness to fall, and then sat in the partially finished she shed looking out the windows. There was nothing moving out in the backyard so Steve finally went out there and walked near the lights so they would fire up. 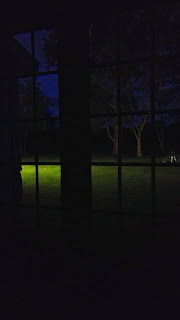 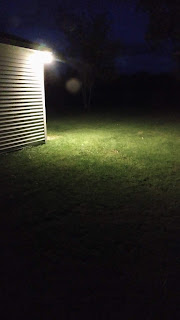 Ahhhhh Let There Be Light!!!

I think this is going to be especially nice in the winter time. I love sitting at night and looking out at the snow falling, as it's reflected in the exterior lights. When we lived in the log house on North River Road, we had exterior lights on the outside of the patio doors aiming outward. It would reflect on the snowflakes falling down and make such a beautiful sight, reminiscent of a snow globe.  Bring on winter?


As for the She Shed, our next project was installing a little window near the top of the stairs that leads into the kitchen.  This is a really odd shaped window. It was only single paned glass and an old wooden frame.  It needed to be replaced with a thermal-pane or double paned window.  We measured it up and inquired at Menards about having one special made to fit the space. Ack!!! $290.00 I kid you not.

We managed to find one at Habitat for Humanity ReStore that was for $20, but it was also their 75% off sale on all windows and doors. So we got it for five bucks! it wasn't quite as tall as we needed for the space there would be an extra inch on the top and the bottom. It is a nice high quality window with the same matching grids between the glass.  It cranks out in a vertical method, but we needed to mount it horizontally, like an awning window.  Hey, that's okay, Steve would make it work. 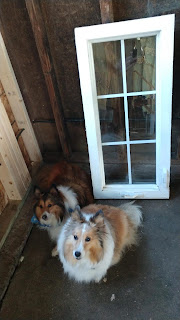 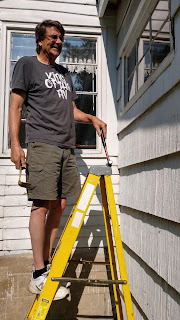 With Steve working from the outside on the ladder, and myself on the inside holding it and placing the shims until we had it level and plumb. We make a good team and figure out how to make the best with what we have. 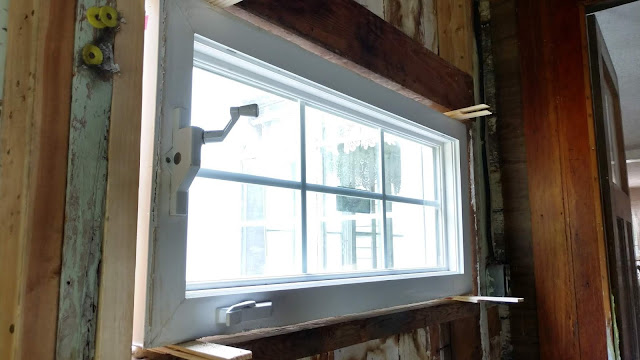 Soon he trimmed out the window on the exterior and I was able to give it a coat of paint before it started to rain. It's best to get the wood sealed in and not have it absorb any additional moisture.
This morning I went back out and gave it a second coat of paint, as well as touching up all of the other windows that we have installed so far. 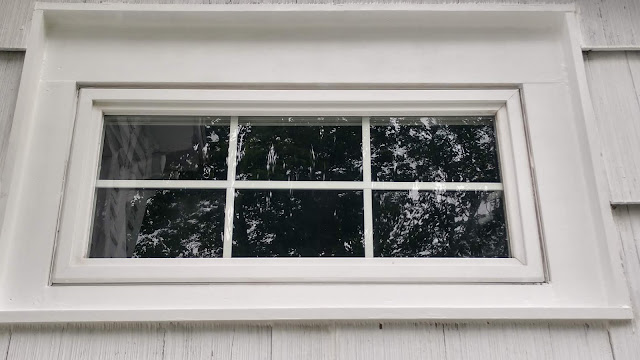 Steve is gone today, helping his brother Pete on a garden shed at his house in Menasha. Steve, Pete, and their brother Mark are all working together to make their garden shed a pleasing feature in Pete's backyard. Brotherly love.

I worked on some projects myself while Steve is off doing these other adventures.

Since we are not able to move the front steps, due to a crazy new city ordinance that won't let us put anything new within a 25 ft setback of the road, we had to leave the steps where they already are. That means they are grandfathered in where they are at right now, so we will make the best of it. I painted the wood of the stringers a matching red. Then I gave the existing stair treads two good coats of the grey oil deck paint.  I added bit of red to the pipe underneath our mailbox. The box is already a nice matching gray. I'm considering some pretty lettering on the side in red to put our name and house number on it. That will be another project for another day.


I accomplished another thing last week. I ordered up a bushel of beets from the truck farmer on the corner by the grocery store in Oconto Falls.

I love to make pickled beets, using my mother's recipe that never fails. Year after year I make the same ones, and year after year they always turn out great. 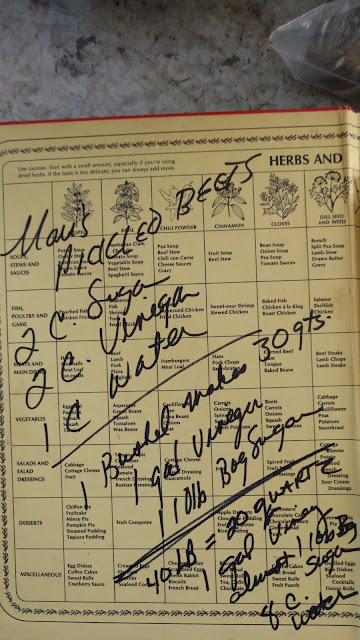 I have childhood memories echoing in my head of all of the years I learned to can fruit, vegetables and make pickles and sauerkraut at my mother's side. We had a large family and not a lot of money. We also had a large garden. Everyone had to pitch in and help. My father would also haul large bags of vegetables or cabbage or potatoes back from a place called "The Muck Farms". It was a large commercial growing place that would sell their seconds, the ugly or misshapen vegetables, at a discount. We would buy huge quantities and can them up and sell excess produce to our friends and neighbors.

I remember standing alongside my mom in our sweaty hot kitchen, humid with the moisture from the boiling canning kettles on the stove. Washing jars in hot hot water to keep them clean and boiling the lids for sanitary canning. Why is it always the hottest part of the summer when vegetables come into season and are ready to be harvested and preserved?? Lol.

We would work for hours cleaning, scrubbing and cutting up vegetables. We had many many shelves in the basement with multiple rows of jars that would be filled up by the end of Summer. With a large family, it was so handy to reach for a jar off the shelf in the middle of winter and pop it open to add to a meal. Stewed tomatoes, sauerkraut, and all different types of vegetables lined the shelves, including things like pickles, jams and jellies, and mom's famous pickled beets.

I distinctly remember Mom standing with a smile of satisfaction on her face, surveying our rows and rows of finished products lining the shelves in the basement. And one time she said to me, it echoes in my brain, "My oh my, aren't we rich!!"

Back to my canning day:

I started cooking up a couple pounds of beets at a time in my tall kettle. I started doing them in the house on the kitchen stove.  It was hot outside, but I had the central air going, and a big hood vent to help with the steam. 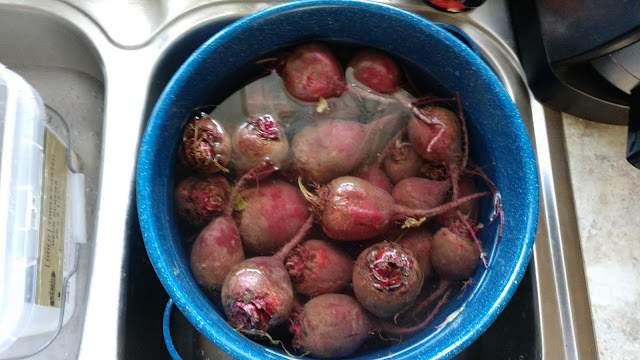 The beets need to be cooked up enough so that the skins "slurp" off, as my mom says. Then I can cut them into chunks and fill the jars with pieces of beets and then ladle in the hot brine. 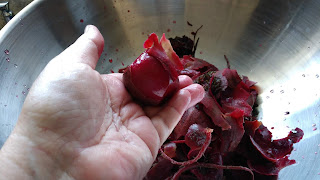 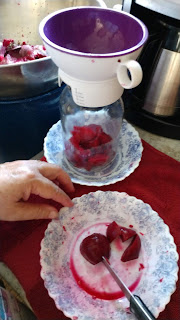 Once the jars are capped off with lids and rings, they are set in a hot water bath in a canning kettle on a slow simmer for 35 minutes. By the time I finished the second batch in the house, I was battling the central air.  It was running non-stop and not keeping things cool. It was in the 90-degree range outside and the humidity levels were atrocious.

Steve came home, and I asked him to set up the outside propane burner unit. It's actually for deep frying a turkey, but we use it for steaming crab legs, dyeing wool, or putting my canning kettle on to simmer.

Doing this task outdoors was a lot easier. I would simmer up a pot full of raw beets until I could slide off the skins. Then I would switch over and put on my canning kettle to simmer the next batch. My canning kettle holds seven jars at a time. It took a couple batches to finish up the rest of the bushel of beets. 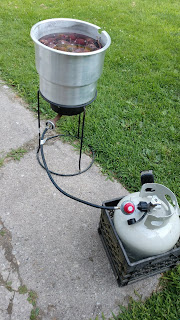 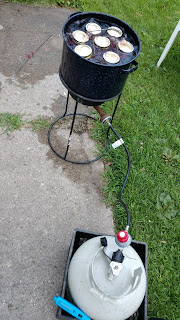 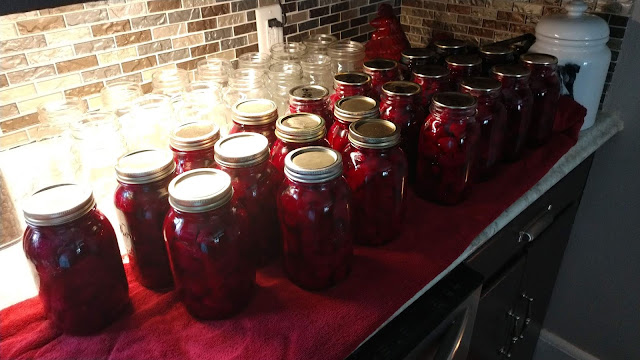 To finish up the blog today,
here is a little YouTube clip
we made of the dogs
out enjoying our big big backyard....

Stay tuned to our next project
on our National Folk Farmhouse.

Posted by KarenInTheWoods at 4:54 PM

Labels: canning beets, making a she shed out of an attached garage, motion lights, Our National Folk Farmhouse, pickled beets, projects on our house, she shed, window replacement