A couple years ago I wrote a blog post entitled "It All Started With a Craigslist Post"  The blog post detailed all of the steps of what we undertook after Steve found a beautiful wool oriental rug on Craigslist. We ended up ripping up all of the wall to wall carpeting and restoring the original hardwood floors. Here is that blog post:

It seems that someone was selling a mission style leather recliner chair that matched the one we had bought six years ago for Steve. It's a very comfortable chair, so much so, that I never get to sit in it.   Steve hogs it and all I get is the couch.

Since then, the store we bought it from discontinued them. I kind of always regretted never buying two of them at that time. Although we really didn't have room for 2 in our small livingroom.

But there was that Marketplace ad on Facebook.  The guy was selling it for only $200 and it was in "like new" condition. Steve's chair was priced at $850 new when we bought his in 2012. So this was a good deal for $200.  And how often would we ever find a matching chair again? 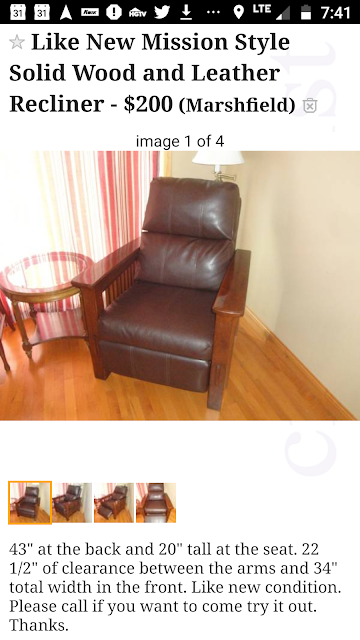 I thought about it a little bit and we called the guy.  It was 8 pm at night. He said sure come on over. The only problem is "over" was 127 miles away!!!

We hopped in the Tracker and took off to the west. It was a fun journey, because as we drove, we were talking about all different alternatives of how to rearrange the furniture to make this chair fit. It's not just a mission style chair, it's a recliner as well. So we need some space behind it to recline. It can actually stretch out flat almost like a bed.

We got to the guy's home easily, even in the dark, using the GPS. The chair was just as he had described, the wood was absolutely beautiful and it was in perfect condition. He barely used it. Actually he had a different chair he wanted put in that spot. So once we loaded up this one into the back of the Tracker, Steve helped him carry his other chair from another location to where he wanted it put.

We headed on home, going another hundred and twenty-seven miles. And we didn't get home until almost midnight. But that's okay, Steve was off work the next day, so we planned to sleep in. Our dogs always have a different idea.  They had us up at 5:30 am.  Argghhh!  Soooooo in the early morning we decided to rearrange the living room. That's where I get this theme of  "It All Started With a Facebook Marketplace" thing.  This is only PART ONE.  There will be a PART TWO and THREE in future blog posts.
.
Putting the two chairs side by side in front of the fireplace was our best choice of space. Pulling them further into the room so there was room to recline behind them made the most sense. But now the couch was way too big and in the way...  Here are the chairs, my new one is on the left with the quilt on it. We each have our little laptops as well. 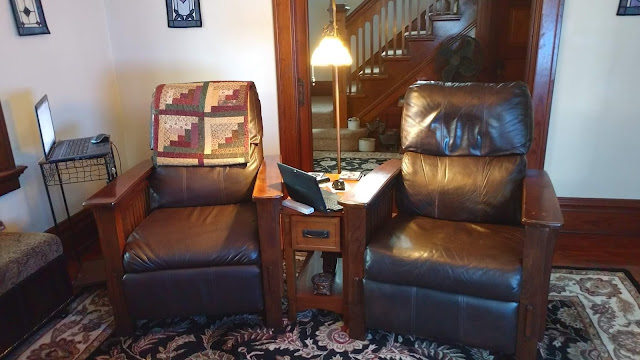 Sooo we moved the couch out of the room.  Ahhh that was better. More space!  We are now situated comfortably in our living room with the two chairs facing the fireplace which is the focal point of the room anyhow.  I put a lovely antique rocker that we had gotten from our neighbors in the corner by the fireplace. Our tv snugged into the other corner and we are all set with Steve's antique lamp between us.  Steve also wired in two sweet little tulip lamps on the mantle with wiring to hide behind the mirror and down to an outlet on the side of the fireplace. 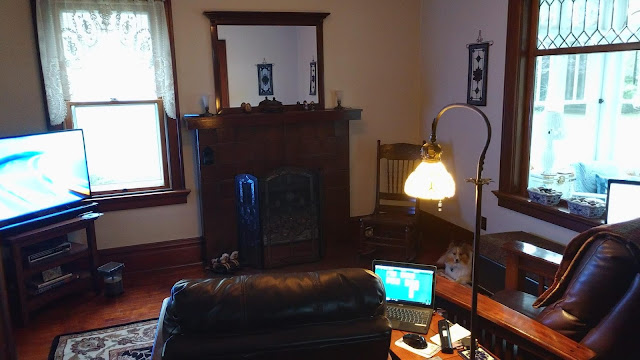 The room seems much wider now with the couch gone, and we can both sit in comfy reclining chairs to look out the window, watch the fireplace, or watch tv like a little theater seating group. 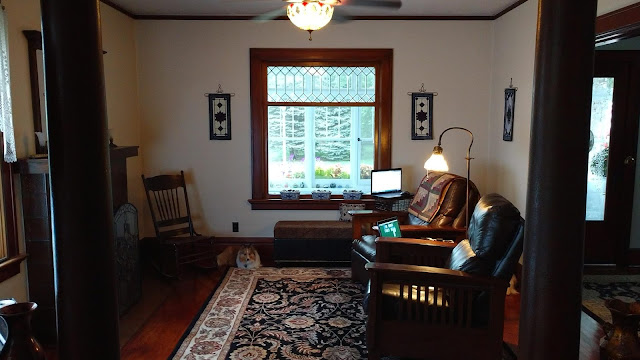 Binney decided her new spot would be
between the rocker and the ottoman.

Finnegan found a good spot behind our chairs,
by the treasure chest. 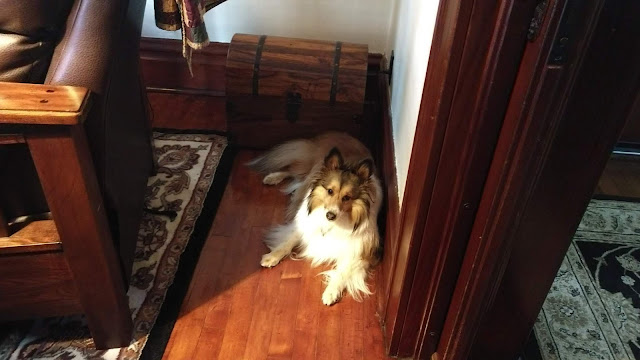 Now, what to do about the couch?
and the endtables and lamps?

The next step was to take the couch and put it into what is my Loom Room.  With two big rug looms in there, it was kind of crowded.  I do like weaving rugs, but do I really need two of them?  They are both identical and I had to make some choices now. 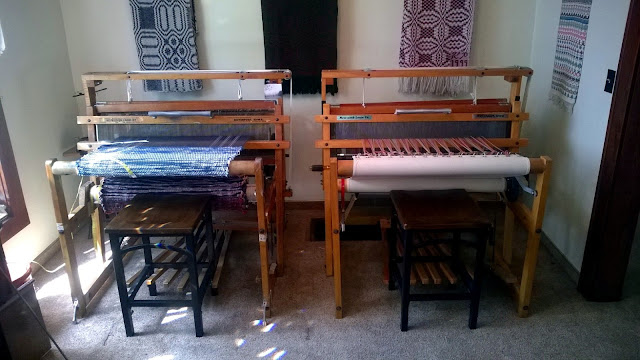 I decided that I wanted to move one of the looms upstairs--- and make a weaving room out of the smaller room that that I was using for fiber storage. It was originally the maid's room when our house was built 100 plus years ago.  Steve agreed to help me.

I not sure when this funky linoleum had been added to the little maid's room, probably in the 1950s. I love it and I think it's really cool and it will stay as the floor of my new weaving room. 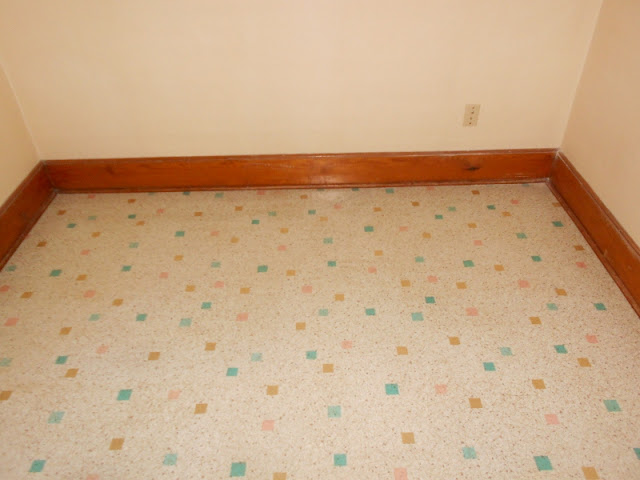 We disassembled one of the big rug looms and brought it up stairs in pieces.
We have done this many times before with various looms, so it was not too much of a task. 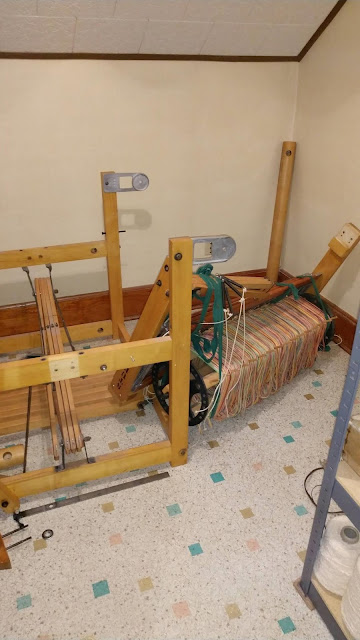 Then we easily reassembled it and Steve also helped me reorganize the fiber storage room, moved some shelving, and labeled some totes. Now my sweet little room is all ready for weaving. 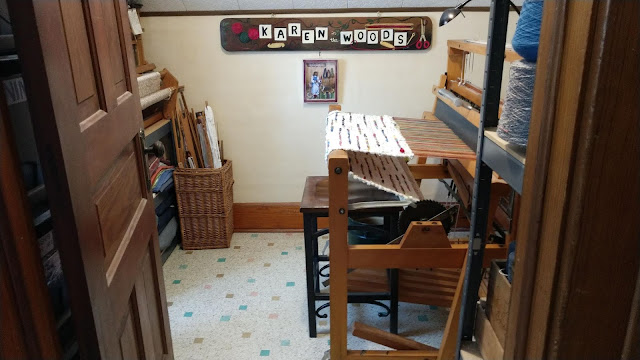 I sorted through all of my fiber stash, and reorganized a lot of it.
It helps to condense down and combine items in the totes as well. 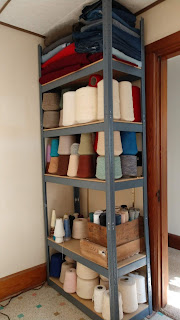 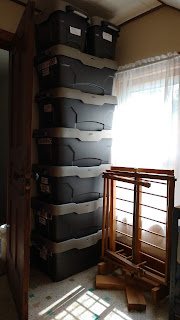 I hung some lace curtains up on the window.
Steve mounted some other shelves for my tools.
I am all set! 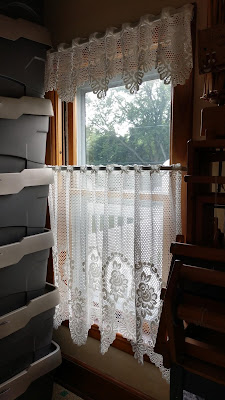 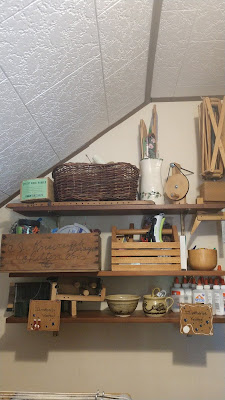 Besides the big rug loom, I also have two table looms. One fits well on the top of a shelving unit and the other one is residing in my quilting/sewing room for the time being.  I can take the table looms out at any time and put them on a rolling bench that is kept out on the front porch. I often take them along camping in the motorhome or along to workshops and demonstrations.   Three looms is enough now, I think.

Back down to the loom room.... after moving out the one loom ---- I could put the other large rug loom into the center of the room. Now we could use the couch in there as a kind of a "Fiber Den" when I do my other fiber crafts, like cranking on my sock machine, or spinning yarn on my spinning wheels, I can sit on this couch in my Fiber Den! It will be great for naps as well.  I put the endtables on each side and added the stained glass lamps to balance it out. 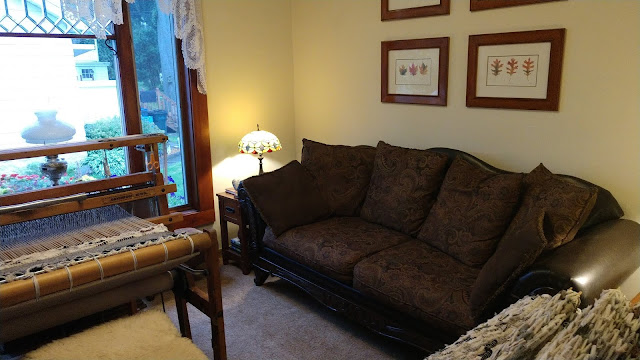 The remaining loom is in the middle of the room, taking up a large amount of space. The cool old hutch, which is original to the home. It had been in the diningroom, but we moved it to this room when we bought the house.  My dining set has a matching hutch and buffet, so this hutch became extra fiber tool storage and does double duty as entertainment center as well with a tv. 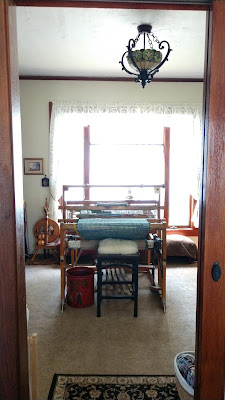 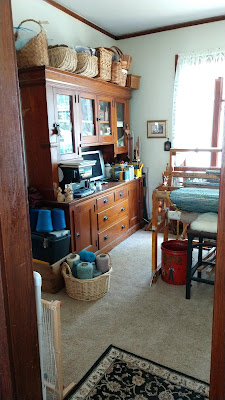 I don't think keeping the large rug loom in the middle of the room would work for long.  I decided that three looms is enough. I posted an ad to sell it on the Facebook Marketplace. Within 15 minutes a gal from the next town over laid claim to it. She came to check it out on Sunday and will be back this upcoming Saturday morning to pick it up.

In the meantime I am weaving off a few more of my big heavy Birch Tree looper rugs using up some of the neutral warp that is on the loom. Don't worry, there will still be plenty of warp left on there for the new buyer to practice with and make more rugs of her own. 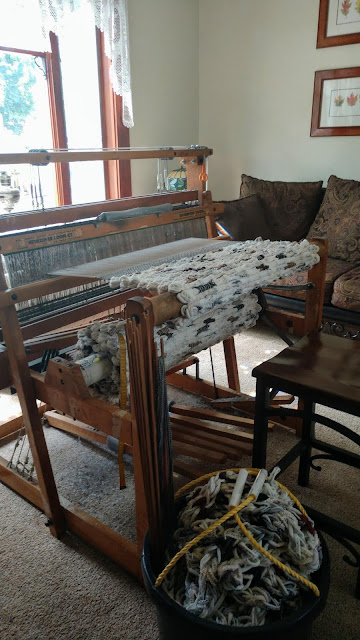 Steve is all comfy in his chair---- 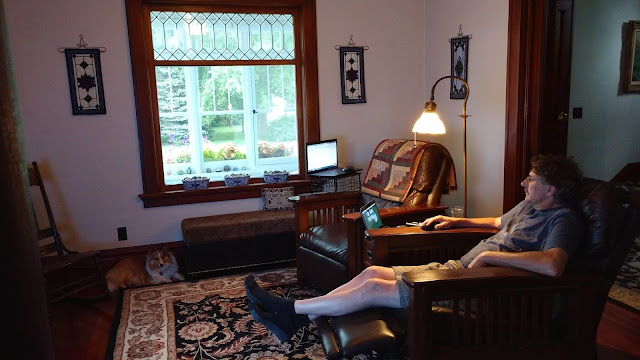 I am going to join him in mine!
Posted by KarenInTheWoods at 9:47 PM