In my last blog, I started on all of the changes we had to make just because of a Marketplace ad from Facebook.

Now for one more change that we made, due to a Marketplace ad from Facebook:  last week I saw this very interesting ottoman. We needed a long low seat for additional seating in the living room that could go under the front window. Luckily, this one was only in Kaukauna, about 18 miles away. We made arrangements with the lady to pick it up off her front porch because she had to leave her house for an unexpected errand. She told us if we liked it, just put the money in an envelope and slide it underneath her front door mat. What a trusting soul! I sent her a selfie pic of myself and my husband in the car so she knew we were real people, just little old honest grandma and grandpa! We drove over and snapped it up for $65. 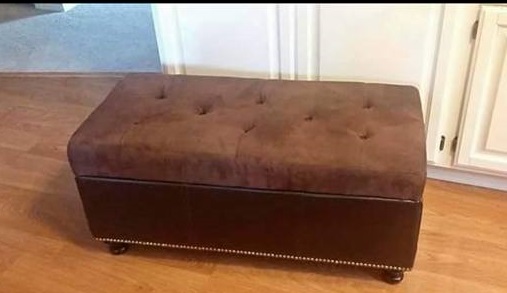 The top cover is really clean, the photograph of the velour just kind of made it look dirty due to the nap of the fabric. I wasn't so worried about the top cover anyhow because I was going to recover it. But the inside and lower portion was very clean as well and that's what counted... 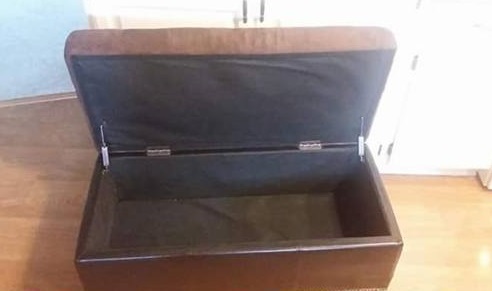 After we left her house, we drove over to Jo-Ann's Fabrics. I had a coupon in my hand and a sale was ending that very day.

I picked up some additional matching fabric that I had used to cover my dining room chairs. It's a deep rich paisley tapestry type fabric with gold and black and brown accents and an underlying burgundy. I like it because it doesn't show the dirt and wears well. 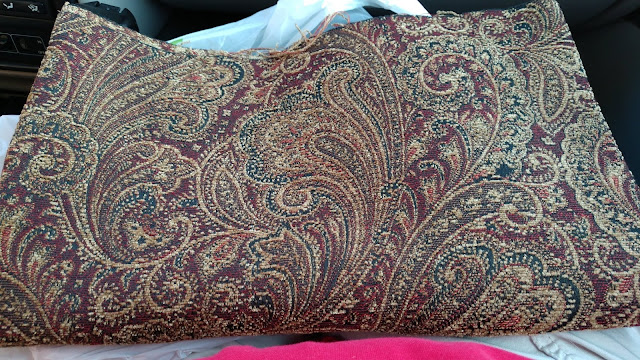 I only needed one yard of the fabric. As soon as we got home, Steve removed the top lid and I got to work. I used chalk to mark the corners on the inside of the fabric. I sewed some box corner seams, then I spread it out over the cushion and flipped it over. Now all I had to do was fold under the edges all of the way around and staple them into place. Of course, I ran out of staples part way through. Isn't that the par for the course? We went to 3 local stores to look for these particular staples for a Sears PowerShot staple gun. Steve said I would have to wait for another trip up to Appleton to check some big stores for them. We came came home empty handed. But then we checked an old box in the garage that was left over from an old staple gun, long ago gone, and the staples fit! So I could finish my task at hand. 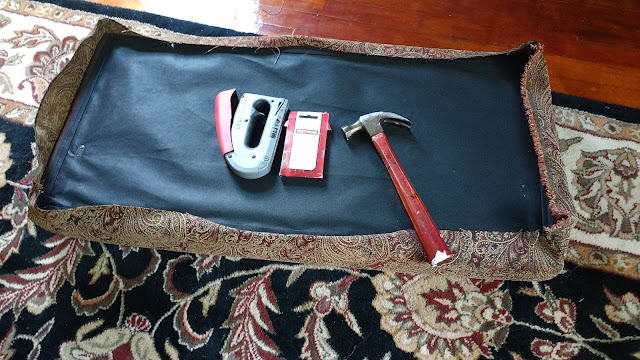 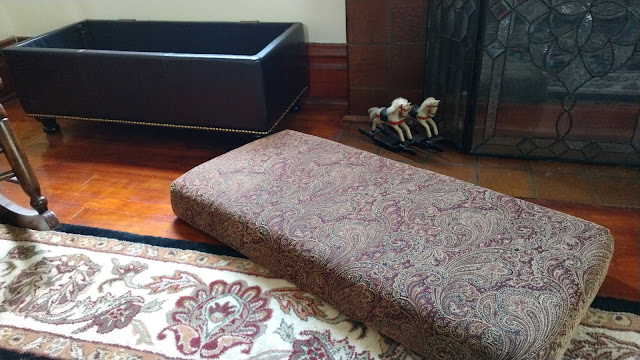 Steve put the lid back on the base, as well as the safety hinges. Sometimes you just got to use your head when working on things, hey? 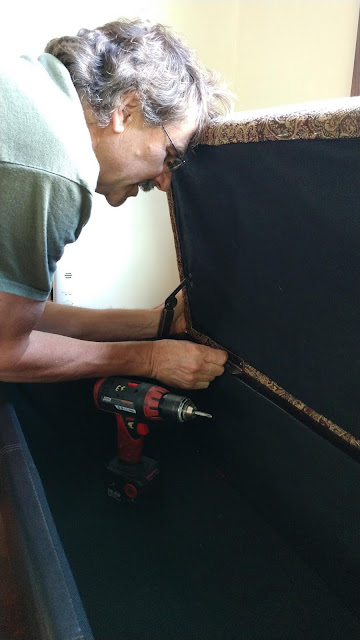 This ottoman will give us additional seating for one or two more people when we have visitors, because after moving out the couch to the other room, we only have a rocking chair besides our two mission recliner chairs.

The other benefit of it being a storage ottoman, it will work well for our folded up snuggly blankets that we use in the winter time. 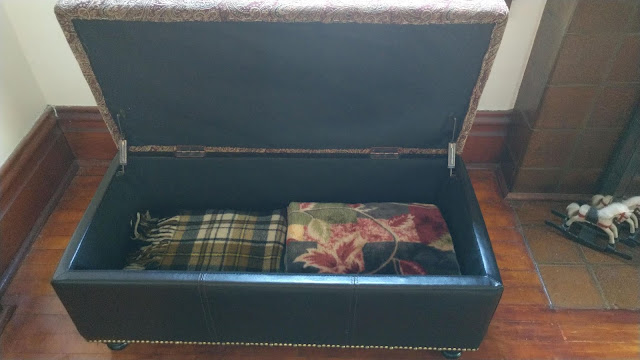 Now I will digress for a moment and talk about some other little foot stools that I recovered with that same fabric a while back. Steve and I had been in the Habitat for Humanity ReStore and I found these two adorable little foot stools for $10 each. One was a very ugly large cabbage rose print, and the other one was a wine-colored burgundy. 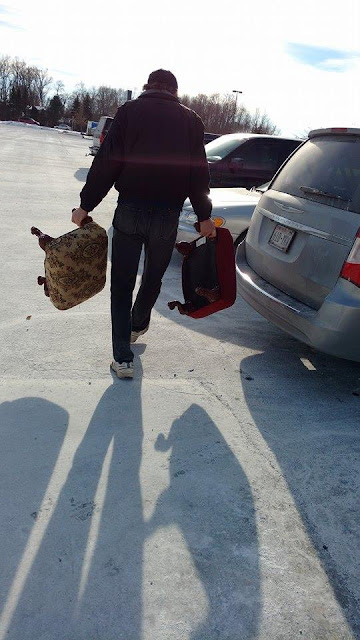 I finally got around to recovering them.
The one on the left was the ugly one, I did that first. 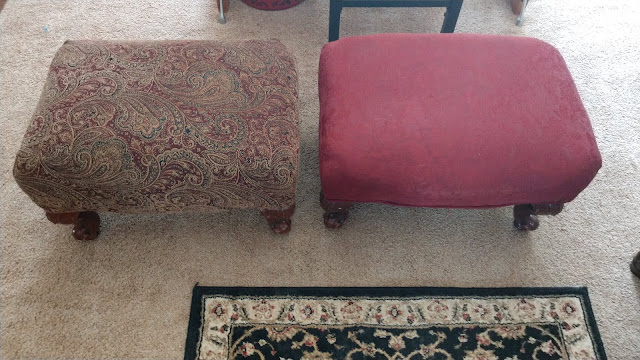 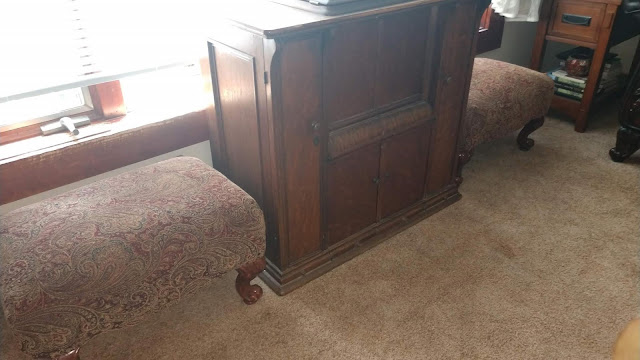 Of course!!!
Doggie Perches
to look out the window
and keep an eye out for the
mail lady,
burglars,
or our neighbor Diane! 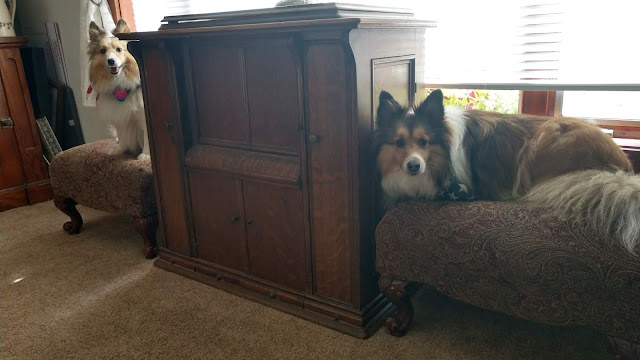 Now, back up to the living room and the newest storage ottoman:

I was a little concerned that if the dogs jumped up on this ottoman by the front window, they may scratch up the beautiful original woodwork of the windowsill in the living room.

The dogs had already sadly scratched up the windowsill in the Loom Room / Fiber Den room, but that is not original woodwork and I'm going to replace it someday with something else, so I didn't mind as much. I'm even considering lining the edge of that window sill in there with assorted painted Mexican tiles to protect its surface. That will be a future project?

But for now, I was thinking of protecting the front window sill.

I had an idea.

I took out some Modge Podge. When is the last time you ever used Modge Podge? They still sell it in the craft department. I coated some beautiful rocks we had taken from the beach when we were up in Canada last fall.  This is fun!  When they dried, they were clear and shiney and oh so pretty. 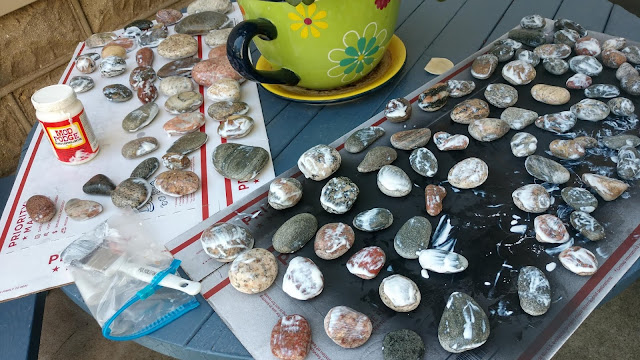 I placed them in these lovely delft blue ceramic planters that I had found at a thrift store. I used a hot glue gun to add a layer of felt to the bottom of each planter so it would not scratch. Whatever did we do before glue guns? 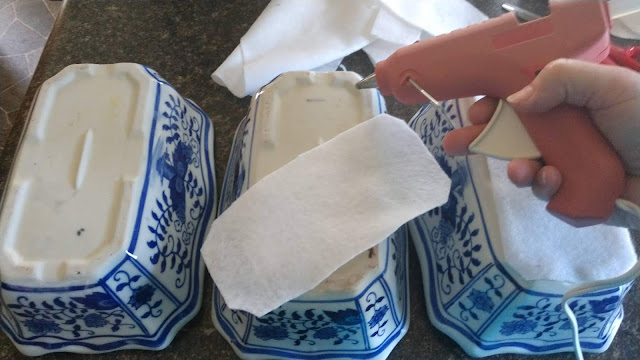 I put all three of them in a row across the windowsill, is a perfect deterrent from keeping the dogs from jumping up with their paws on the beautiful woodwork! 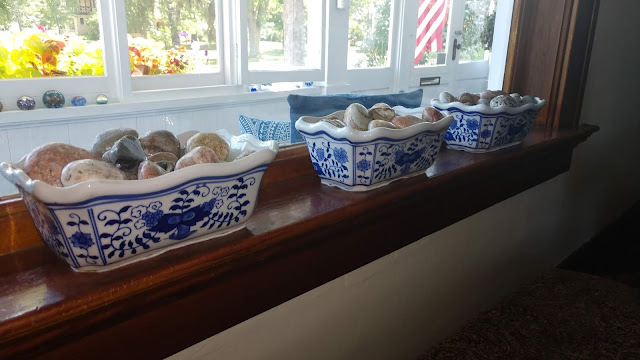 So far, so good. They have not even attempted to jump up there, nor look out the front window.  I think it will work.  The rocks are heavy enough to not get knocked down. 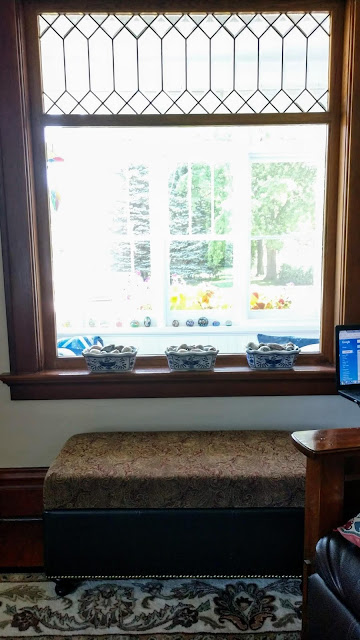 That is PART TWO of the changes we made in the house, all because of a Facebook Marketplace ad. I still have PART THREE coming in another blog.  Stay tuned!

Posted by KarenInTheWoods at 2:48 PM