Yup, that snow blasted into the area and tonight the temps are going to drop to well below zero.  Winds are kicking up and that means wind chills of about 30 to 40 below.  brrrrrrrrr It is a light soft fluffy snow.  Should get a little more snow, but once it starts blowing, it will be packed into hard drifts. 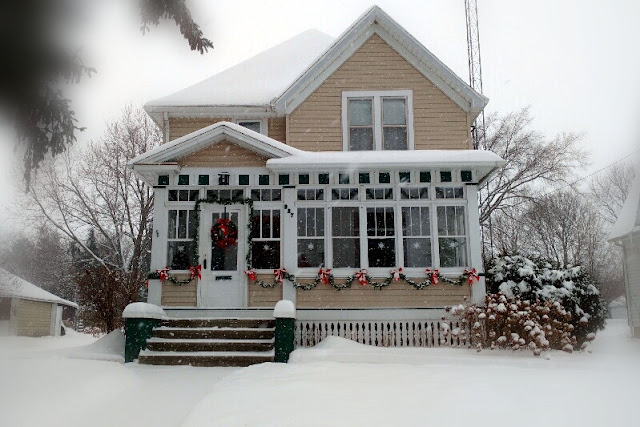 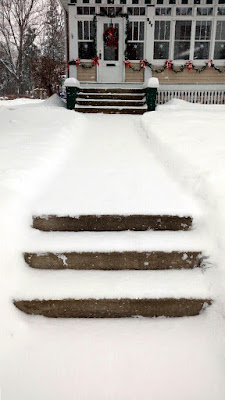 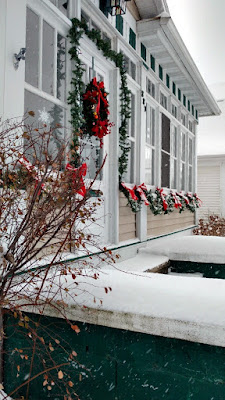 We took the dogs out for a walk in between the two bigger snowfalls when things calmed down to a little lull.  Donning their little jackets, we set off for a loop around the block.  That was enough! 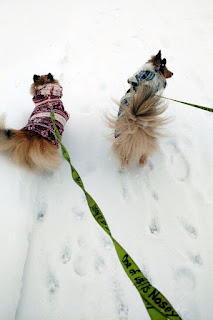 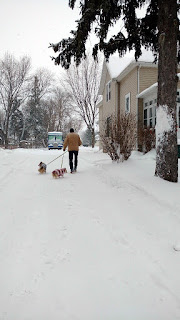 Yesterday, Steve's boss Linda invited me to stop by the office for lunch.  She had been told that Steve didn't want a retirement party.... soooooo she just enlarged the staff meeting luncheon to include a few of the DNR wardens, Friends of High Cliff members, some of the camp hosts over the years and of course, the park staff.  I kinda sorta knew it was going on, but agreed to not tell Steve.  I knew he would go along with it.

The pot luck was an enjoyable gathering with a lot of appreciative people who hated to see Steve leave. (his last day isn't until Tuesday)

People came to the office and gathered around Steve,
wishing him well and telling them how much they will miss him.

They started out giving him a gag gift of an
''Old Man Sweater''
but it turns out it fit him well,
he looks great in it,
and he likes it and will continue to wear it! LOL 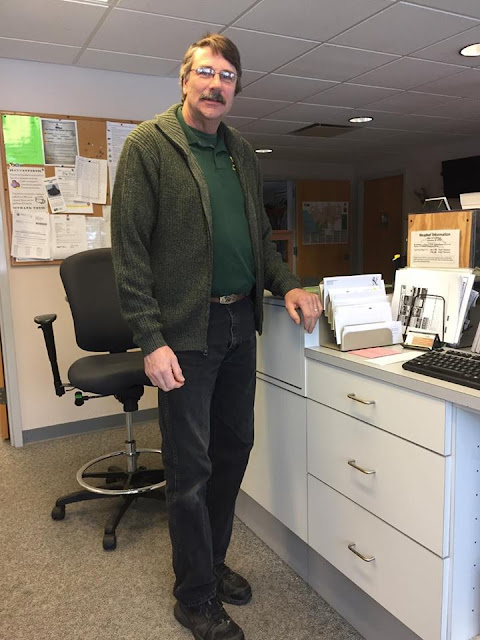 Linda, his boss, on the right, put together a big photo album of all of his accomplishments in the park. Projects that he had part of, or initiated, or invented or repaired around the park. What a great remembrance of the things he did that made a difference. 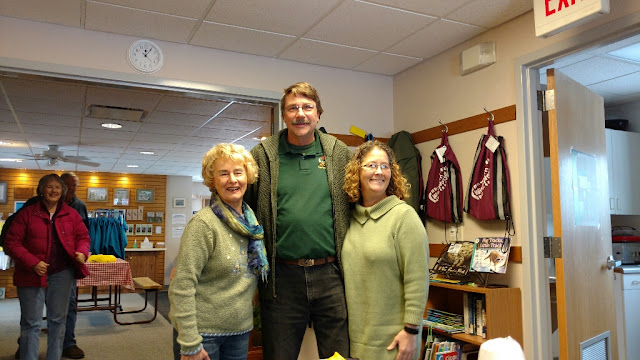 Camphosts, staff, and volunteers brought him such nice cards, gifts and tales of fun times they had while working with Steve. It was a great afternoon of laughter, stories and good natured teasing. 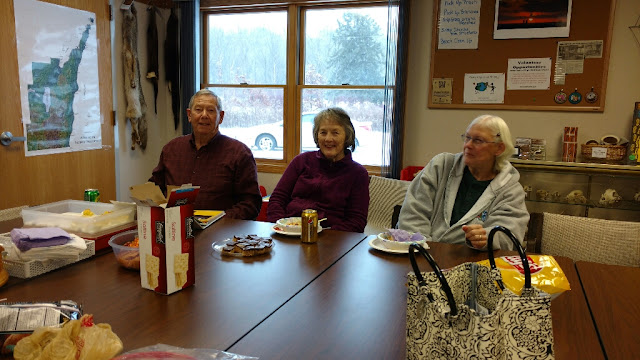 Horsing around with his two ''Junior Rangers'' as he fondly calls them.
Check out the photo bombing fox on Steve!
Jay has a coyote problem
and Jeff is doing his Deer in the Headlights impression. 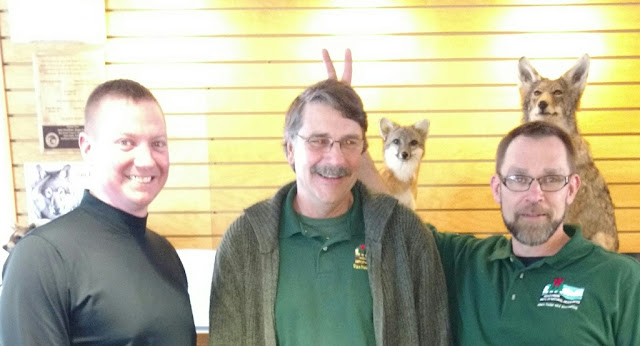 Of course, with the Warden Tom,
The Buck Stops Here! 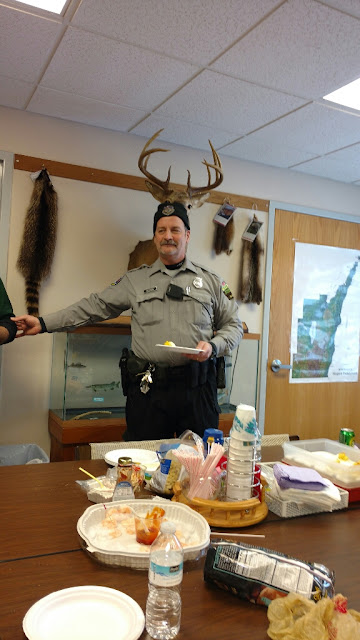 Thank you Linda for being such a great boss to Steve,
and putting this all together to honor him!
He has really enjoyed his time at High Cliff State Park. 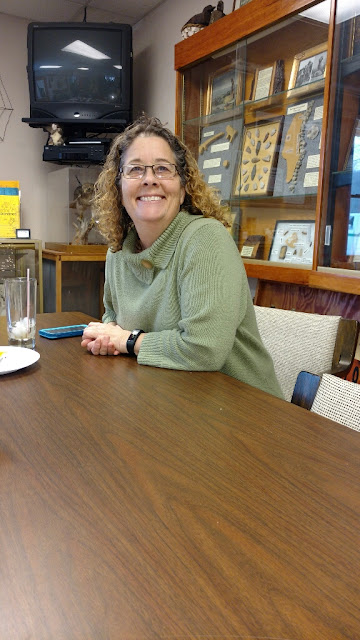 Linda, the creative genius, put together a wonderful array of fun gifts.... Here is a video clip of him opening them up and then a little speech to the folks present.

Steve unwrapped his gag gifts about retiring, along with some very useful items that he will be sure to ''partake of'' in his newly found leisure time.  Heh heh 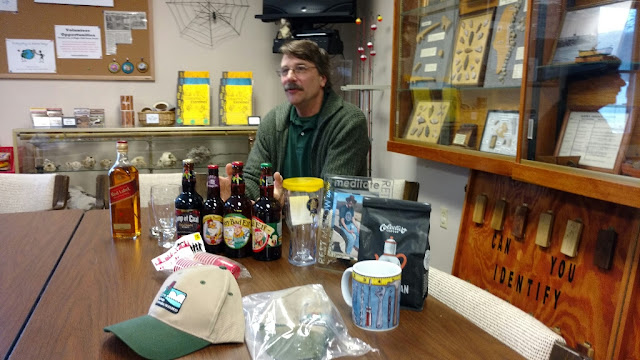 These are some interesting micro brew beers for the holiday..... 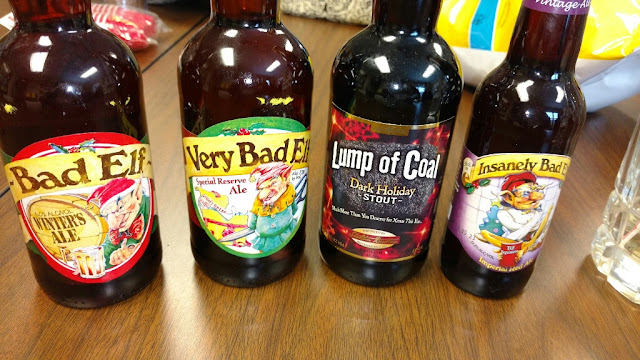 For the evening, one of the DNR wardens, Ryan, invited all of the staff to his home for their yearly holiday party.  The roads were getting worse and we put the little Tracker in four wheel drive to get up to his home on the Niagara Escarpment ledge. 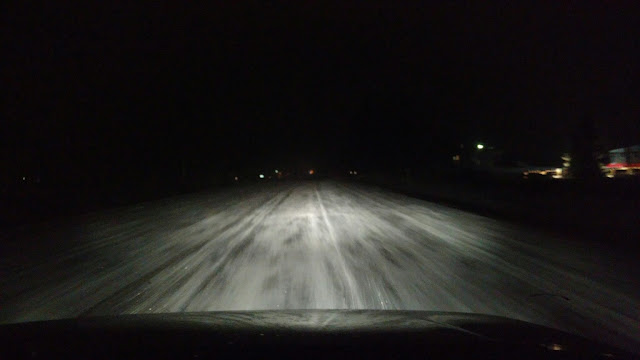 At this party, (also a non-official retirement party for Steve) the guys presented Steve with the sign from the maintenance shop building!!!  Yes, they took the actual sign right off from over the door of the shop!  (it needs to be replaced anyhow).  They all took time to write on the back of it, messages of good luck and kind words.  He will mount it in the workshop that he is working on in our garage! 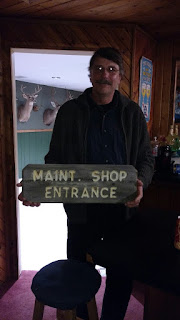 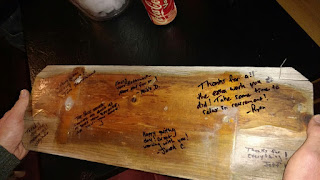 All in all, it was a pretty exciting day.
Especially for a guy who didn't want a party.

They put a vacation shot in a frame for him,
to remind him just what retirement is all about. 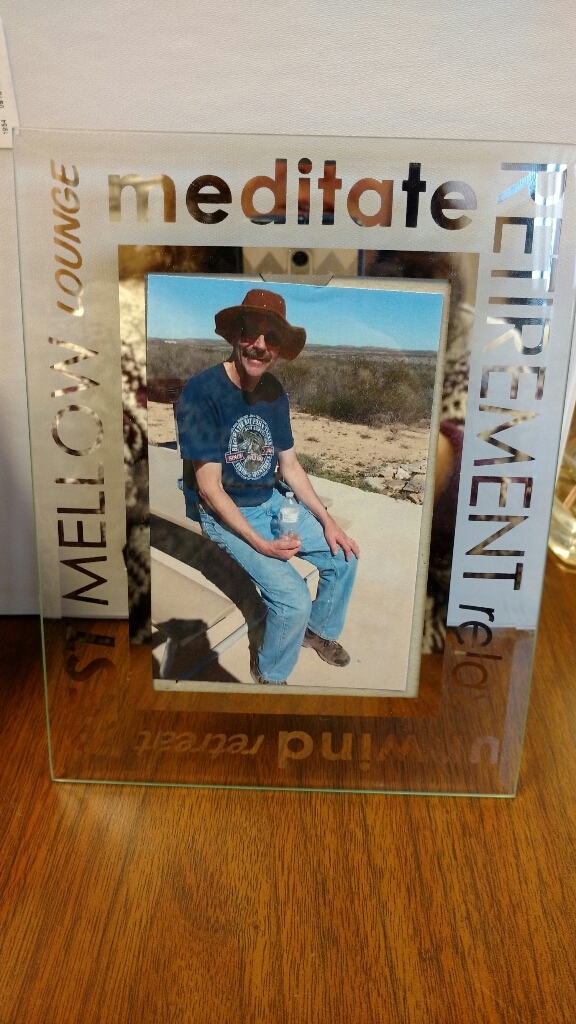 Posted by KarenInTheWoods at 10:17 PM