Settling Into Retirement for Steve and Happy Family Holidays

The newly retired man is settling into his role... I think.

I have kicked him out of the kitchen twice now.

Once, because he decided he needed to sort out and clean the fridge of all stinky old food containers.  The only problem is that he decided that it needed to be done WHILE I was busy baking up 12 dozen sugar cut-out cookies. Imagine this: He is walking past me back and forth with stinky containers. He is flinging germs as he shakes out stinky rotting food into the garbage next to me and rinsing in the sink and stacking in the dishwasher.  That dishwasher is right in the island that I am rolling out dough on, and have racks of cooling cookies!  He is bumping into me, getting in my way, and messing up my baking time frame.  One tray of burned cookies was the result.  I kicked him out. Enough!   Nobody said the fridge needed to be cleaned out at exactly 1:23 p.m. on that day. arggghhhhh

The second time is when he rearranged all the cabinets and fridge. Yes, he has OCD.  I love that he helps and cleans. But----- he puts things which I use the most wayyyy up on the top shelves where I can not reach them. Or he puts stuff wayyyy in the back that I use most often and I have to move five other things to get to them.  We need to do it together as a joint effort. So I kicked him out again.

And yes, he does arrange our canned goods by vegetable, soup, and sauce.... not quite alphabetical order but he does line them up in rows. HAHAHHAHA

He is also sneakily swapping out light bulbs from our old incandescent type (which I love) over to LED and CFL ones. I hate them... and I hate the light from them. I appreciate a warm golden glow, not a whitish green glare. They light up dimly and slowly get brighter after a few minutes. Irritating because he is putting them in places that I want instant light and not waiting for them to *warm up* and get brighter. So I keep swapping them back to incandescent.  Sigh.

He has a lot of other things he can do. We can get though this time of adjustment. Most couples do. Just stay outta my stuff!

He bought a few more power tools for his workshop.  Pretty happy guy assembling them.  But in the house? In the middle of the livingroom? 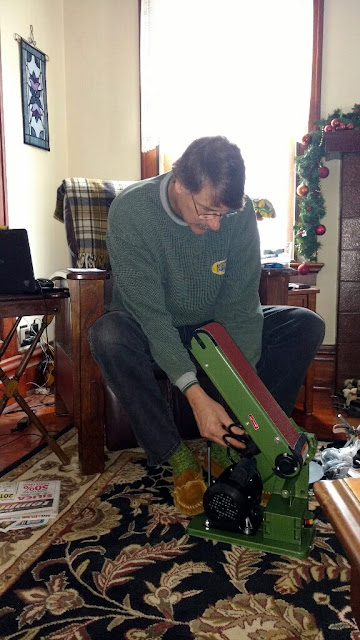 Ahem.. he does have a nice propane heater to hook up in the garage for his workshop.  If he installed that heater first, he could warm it up and assemble stuff out in his shop. Gotta prioritize there, Steveio!

So far, only ONE phone call from his old work place asking a question about something from last week. That is good and not stressing him. He keeps saying he is ''on vacation'' yet because his official retirement day is on Dec 30.  For now he is burning up unused vacation days until then.

We have been trying to take a walk every day with the dogs, although today was below freezing temps and wind chills were about 4 or 5.  It was a chilly quick walk around the block and back home.

We had a GREAT family Christmas this year!

We packed up the dogs and drove up to Green Bay on Friday morning and nabbed little Allegra and Mason on the way through. Their parents had to work late, so we grabbed them up early from the sitter for some family fun at our oldest daughter's house with the other little grandchildren.

It was starting to snow and would be snowing all afternoon and evening.  We got up to Oconto in time before the roads got too bad. Unloading the car of kids, dogs, presents, and food... whew!  Good thing our daughter and soninlaw have a big house for family celebrations.

I had those 12 dozen baked sugar cutout cookies (minus one dozen of burnt ones--- ahem!) and the five oldest grandkids sat down to decorate the cookies. It was such fun! 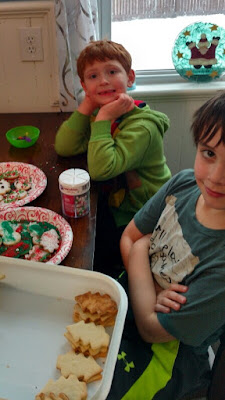 We did this cookie decorating last year and they did good without making too much of a mess.  The dogs underfoot took care of any sprinkle spills. LOL ..... 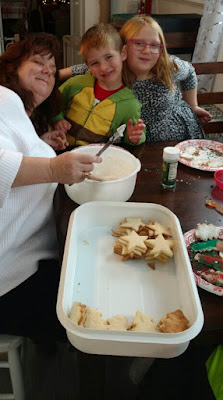 After that, we brought them over to McDonalds for a quick lunch and got them out of the parents' hair while they cooked the big meal for the evening.  We had booked a room at the local hotel, and Steve got us checked in while the kids were eating their McNugget treat. They do not get that very often, so it was a hit.  Once Steve got our hotel key, we were then herding five of the oldest grandtots into our room to dress for SWIMMING!  Yes .... we had arranged with the front desk to let us have our five grandkids come and use the pool. It was really a big deal to the kids.... and did not matter much to the staff because we had the whole hotel to ourselves!  We were the only ones there!!!  The kids could make as much noise in the pool area without bothering anyone else.  Even the desk gal came in and chatted with all of the kids for a while.  It was so pleasant.  We kept them swimming and splashing and in and out of the hottub for three hours. 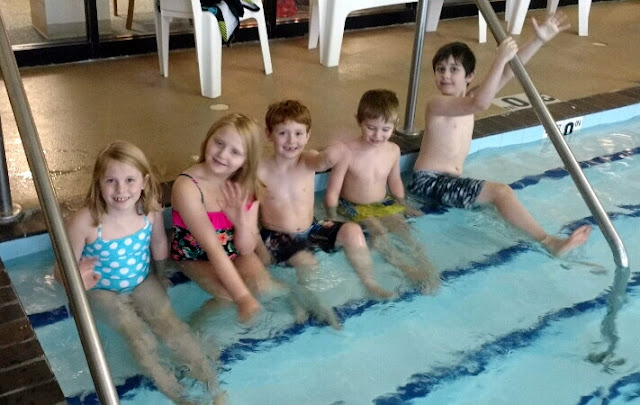 Soon we were trying to finagle five little wet haired kids back into their street clothes. One mishap: there was a mixup of three little boys underwear.... we said just put on ANY pair then! LOL.  Our younger daughter Heather had come to help and we brought them all back to the house just in time for the big meal.

Ooooh our kids outdid themselves with cooking up a storm!  Our soninlaw Waylen had his parents visiting from Oklahoma for the holidays, so it was even more fun to have someone new to share the holiday (and share the grandkids with!)

After the meal, while the kids were patiently, well, somewhat impatiently, waiting to open presents... I got them to gather up for a much desired pic of ALL SEVEN grandkids and ME!  Yes... this is ME in my element.  Striving to be like our Grandma Kafehl was to us kids growing up.

The kids even serenaded us with a song!
click on this video:

Soon the present opening started..
here is a small bit of hubbub that ensued.
It was totally delightful!
click on this video:

Afterwards, those singing grandtots serenaded us again!
click on this video:

Wheeeeee it was a wonderful evening. We had ten adults, 7 grandkids, six dogs and a lot of fun! Soon those worn out suger-high, pool-soaked, super-excited kiddos all zonked out in front of the tv watching, what else, the Grinch Who Stole Christmas, cartoon version.  That is becoming a tradition too. 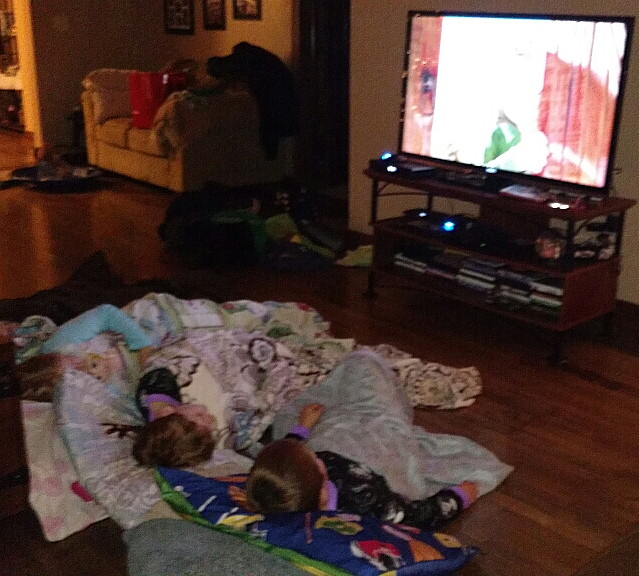 The grownups then gather around the dining table. Ahhhhh My old table from when the kids were growing up. We played cards, drank our preferred beverages and laughed the night away. 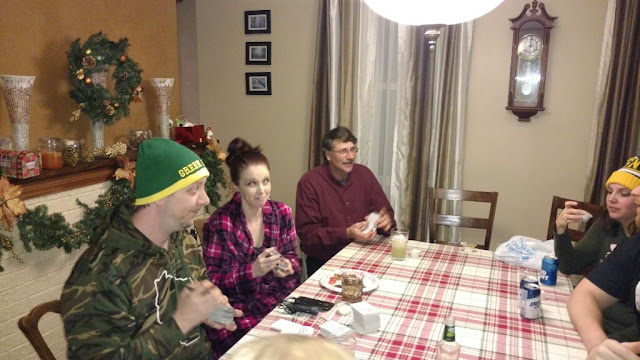 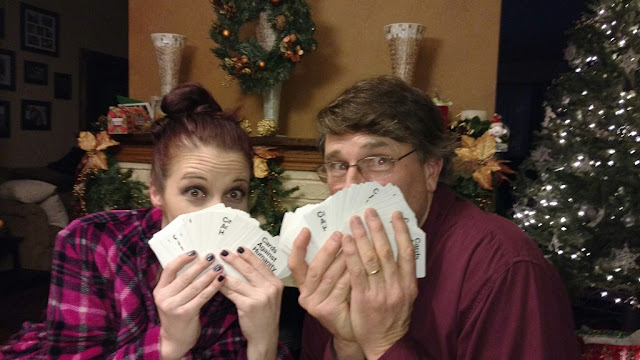 By midnight, Steveio and I were fading fast and we headed out the door to the hotel.  We left our Finney and Binney there in their crate at the house to sleep for the night. No dogs allowed at the hotel. These pics happened after we went to bed.  Yes, our son and son-in-law appear to have a bromance going on when they win at cards! HAHAHA  They even have matching Team Looker shirts! The girls are thanking me for the matching Packer Hats. 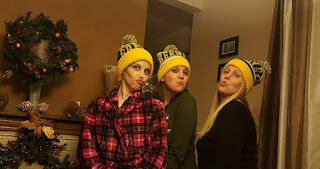 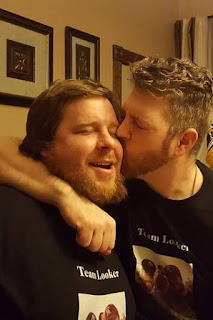 I set the alarm for 7 am to get up and head back to the house to help with breakfast.  We checked out of the hotel, and received such nice compliments on the grandkids behavior the day before from the front desk clerk. That did our hearts good.  We drove the few blocks back to the kids house to let out our dogs and get started on making breakfast for everyone.  Of course all of the kids were up and at em!

This is becoming a breakfast tradition too... last year the oldest grandson Jameson helped me to make it.  This year we let each child of the oldest five grandkids assist.  Each one took a turn.....

First was Biscuit Cutting Chelsea- using a big shears, she cut up three rolls of jumbo flakey biscuits into quarters and put into three glass pans with cooking spray on them. 8 rolls per pan. 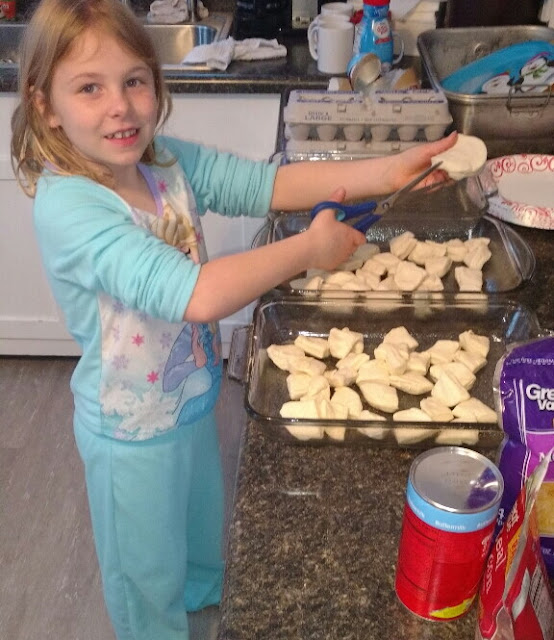 Next was Egghead Cracking Jameson- missed taking a pic, but he shows up at the end with another pic..... He cracked up three dozen eggs, one dozen per pan, beaten lightly, and we poured them over the biscuits.

Third was Bacon Mason- he sprinkled real bacon bits over each tray of breakfast making sure it covered all areas. He snuck a few in his mouth too. You can use bits of ham for this part if you wish. Fourth on deck was Cheezy Clayton- it was his job  to sprinkle shredded colby jack cheese all over the pans. And a little in his mouth too.  LOL 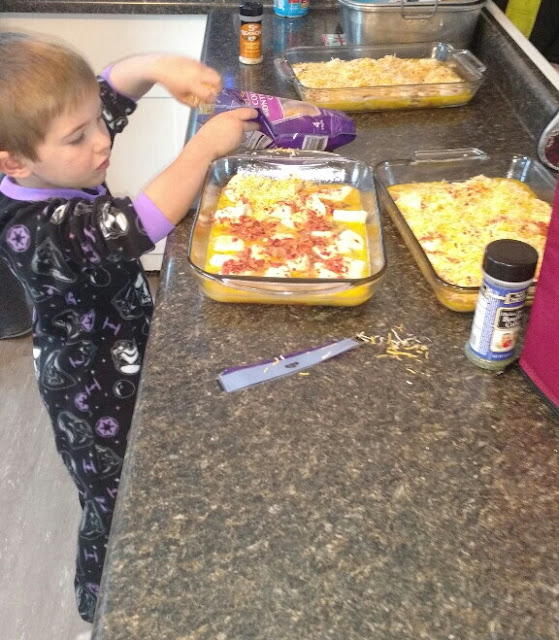 Fifth was the Spice Girl Allegra- it was her job to sprinkle dried onion bits and dried parsley flakes over each pan... and then some salt and pepper too. 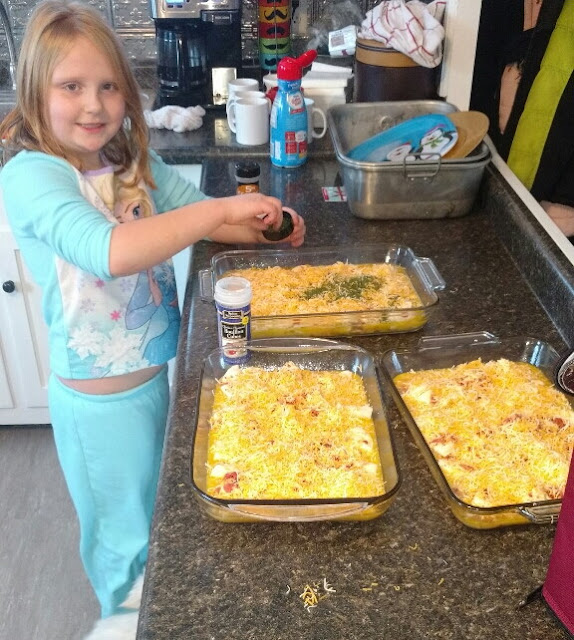 The last step was for Jameson to come back in and supervise that it all was done correctly. Afterall, he has the recipe committed to memory now.  He helped cover each pan up with tin foil and we placed them all in the oven at one time on about 375 for 45 minutes. 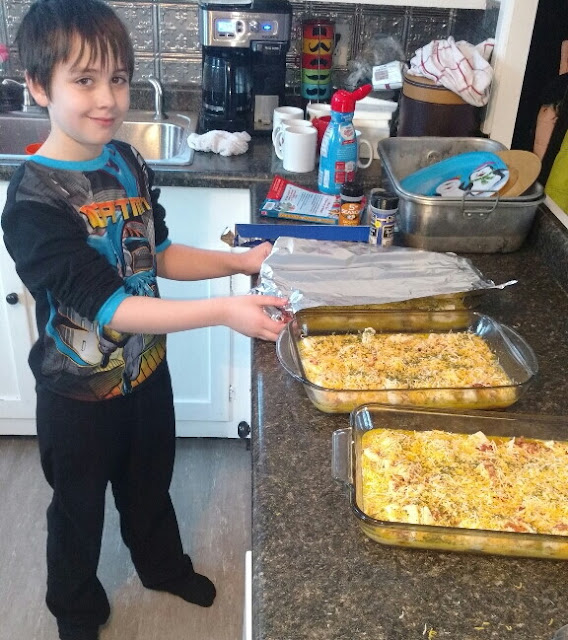 We uncover them the last 10 minutes to brown up a bit. Cut apart in big squares and serve up on plates. Its eggs, meat and toasted bread all in one. Easy way to feed 16 people at one time.

While it was baking, the two littlest grandkids were in on the action. Whitney played with ''Grandma's Watch'', a pleasant past-time of all my grandkids over the years.  And we snuggled up baby Claire in the morning sunshine with our coffee. 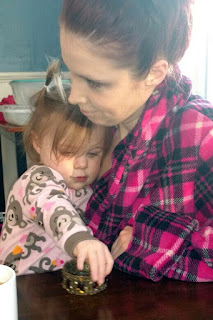 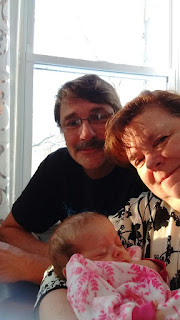 Breakfast was wolfed down by the kids, and a bit more gingerly eaten by the hungover crowd ... heh heh.  Soon soninlaw Waylen and his dad got bundled up for heading down to Green Bay.  You see, our soninlaw bought his father surprise Packer Tickets for the game! What a treat to a visitor to the Frozen Tundra of La La La Lammmbeauuuuuu   (gotta be a Packer Fan to understand that one) 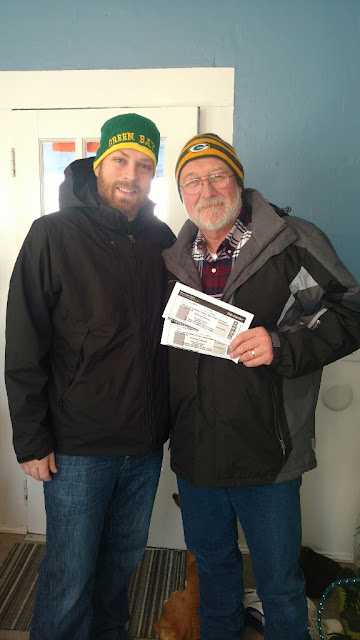 We helped clean up a bit and then packed the car up and headed on home.  I will write more about Christmas in our next blog.  This one is too long, and I am too tired to continue.  Yawnnnn

Posted by KarenInTheWoods at 8:41 PM