Trying to Do Normal Stuff - Pendant Lights in Kitchen

We are holding our breath until the next reports on baby Whitney.  She has an appt. on Friday with a pediatric hematologist.  All prayers and good wishes are greatly appreciated.  Our sweet little tyke.


Also, on Friday we have to bring my Dad to his local doc 120 miles away, to set up his care plan and hospice etc. details.  Friday is going  to be a very, very long day! He is doing well and taking care of himself just fine since our older brother brought him back to his home on Saturday.

In the meantime, I have been sick as a dog for three days and have been barely able to get from the bedroom to the bathroom and back.  Danged virus of some sorts I must have picked up at one of the hospitals. Wore me right down to nothing, I tell ya. I am just coming out of the fog today.


On Sunday, Steveio decided to start on a project in our kitchen of "Our Old House" ....  trying to do "Normal Stuff" and keep himself occupied.  I was miserable laid up in bed, so he worked as quietly as he could.

Here is what he was doing:

Two years ago we bought some large stained glass leaded light fixtures for 2 endtable lamps and 1 to put on the ceiling fan in our livingroom.  We really liked them.... 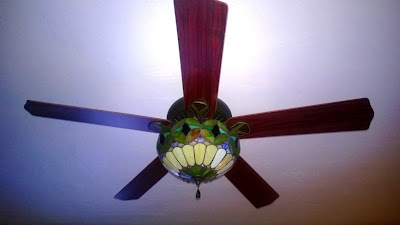 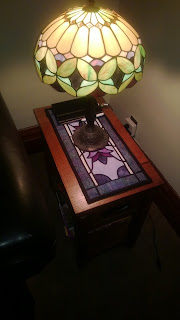 Since then, the local Menards store added some other new sizes of fixtures to that same line of lights from Patriot Lighting called "Belle".  Patriot Lights - Belle lead glass fixtures    We bought two pendant lights for over our island and one extra to rob just the shade from it for the existing fixture over the kitchen sink.  That was easy to replace that one, just the shade. 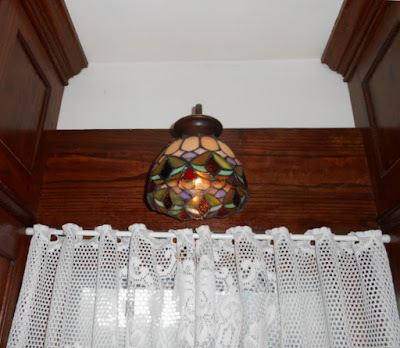 Now for over the island, that is a different story.

Off center in the kitchen over the island is a big huge ceiling fan that was here when we bought the house. We realized over time, that we never used that ceiling fan in the kitchen. The lights were not bright enough for cooking or food prep tasks down on the island. It wasn't even lined up over the center of the island, it was off to one side and not really helpful.  When we bought the house, we added the cabinets and the island... and also moved the fridge and stove from the pantry room back into the main kitchen area.

It's a nice Hunter fan, but it took up a lot of space and wasn't being used.

Steve shut off the power and removed that fan easily.  This is an old pic on the left of the big fan that was in the kitchen.  He took it down SO FAST that I didn't get a chance to get a "Before" photo. I heard the power go out and wandered down from my bed to see what he was up to. 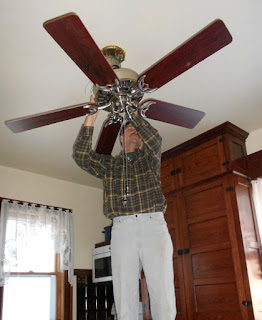 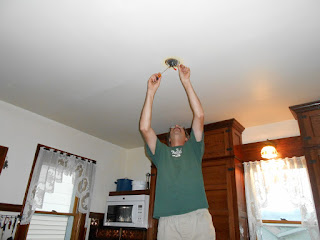 Next up was the careful measuring to mount both pendant lights so they line up over the island, and run the wiring in between hidden behind a trim strip. He also had to do some tricky re-wiring because the existing power switch is over on the far wall, hidden behind the refrigerator.

As long as we were using the ceiling fan, we had a remote control for operating the lights on it and had the remote mounted on a bracket over by the entrance door.  Now without the fan, we had to do some fiddling around.  He got new wires run to an easier access spot, and added a dimmer switch feature too!

So using the original spot for one pendant, he mounted the other pendant an equal distance on the other end of the island.  Look at the mess he makes when doing projects without me around cleaning up after him! 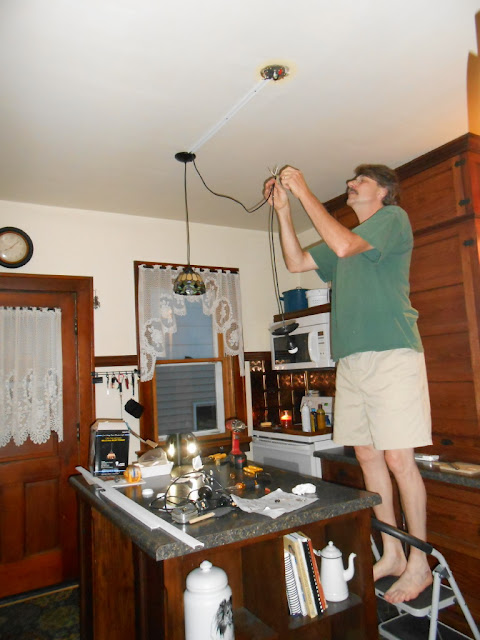 (left: this is before he got the trim strip painted -----  right: here they are lit up) 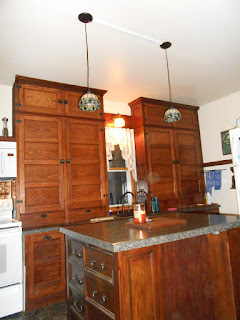 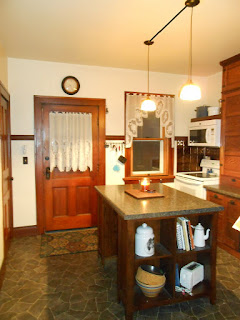 It sure makes the kitchen feel bigger with just two task lights hanging down instead of the big ceiling fan.  I put halogen light bulbs in each one that really shine down nicely on the work area.  I like the look of the old fashioned leaded glass style. With a dimmer, I can control the amount of illumination, but each fixture is rated for 100 watts. 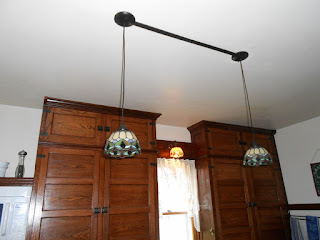 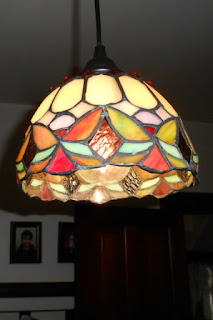 Now.. what to do with that nice big Hunter fan???

My loom room had a pretty ugly old ceiling fan in it from when we first moved in, it had originally been in our bedroom.   It actually had fake wicker bamboo woven panels facing down that we had turned upwards and I restained the blades to match the woodwork. I also painted the dated brass main housing with brown hammered spray paint.  It was okay for the last two years. 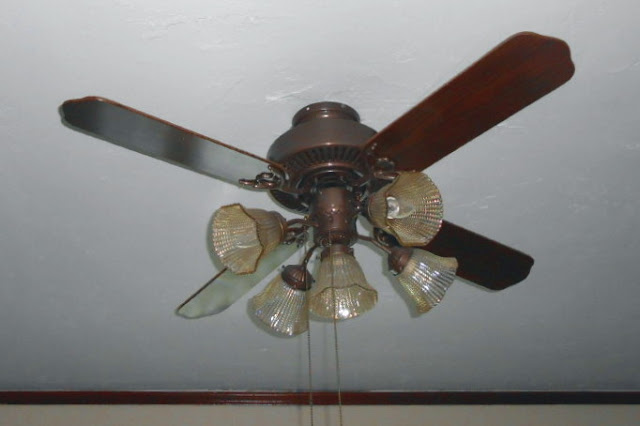 We took that one down and set it by the road with a sign that said: "FREE - YES, IT WORKS"  and it was gone in 10 minutes!


We took the nicer Hunter ceiling fan that had been in the kitchen and put it in that space in my loom room!   We added another leaded glass shade to the base of it instead of the dated individual lights that were on it.  Have you noticed in the home improvement stores almost all of the fans now have a large bowl type light fixture instead of the little individual ones?  So now I guess we are "modern"  but still old fashioned looking? 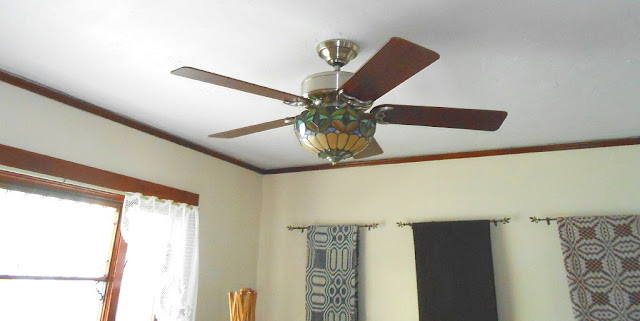 So, that is what we were trying to keep ourselves busy with...  Steve has been working, and lawn cutting, weed pulling, dog walking and anything else that we can do to keep our minds from wandering.  Our thoughts travel up to a wee 2 week old grandchild who needs to get her blood platelets functioning.  Then to help a 78 year old man transition to his cancer situation.   I am not good to either one when I am sick too.  Soooo back to bed I go.

Posted by KarenInTheWoods at 7:52 PM