Wheeeheeee!  Littlest grandtot Whitney Wonder Wade has stabilized and was released from the NICU after five days.  Thank you everyone for your prayers, good wishes and kind thoughts.

Our daughter Heather and husband Jesse have been staying in the top floor "hotel" rooms at the hospital to be close to her while in the NICU.  Aurora in Green Bay has a wonderful set-up for the new parents to stay upstairs nearby while their children are hospitalized.

I got to spend some time with her in the NICU too... which is a wonderful opportunity to get in good doses of "Grandmuddah Love"  and snuggles and songs.

Her blood sugar, blood platelets and jaundice are all under control and will be watched like a hawk.  But the greatest news is that the little tyke gets to GO HOME!!!  Now she can finally meet her big brother Jameson, who was not allowed in the NICU. Here she is all dolled up and ready to roll---- 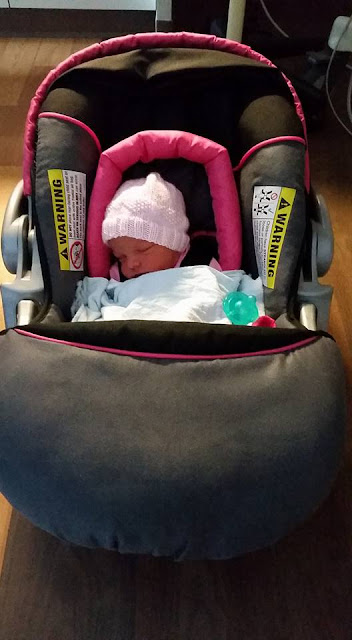 My heart is so full of joy and love for this tiny little being... and knowing she will grow and gain strength, health and vitality now under the good care of her parents.  Be well, my little Whitney!

In the midst of all this new grandbaby crisis, we were also doing our stint as camphosts.  We volunteer at High Cliff State Park, doing our camphosting gig for the month of August.  Our campsite is free, along with electric and water, for the month, with doing 20 hours total work a week between us.  The value of the campsite is now over $860 a month, so that is a pretty good bargain.

I drove our rig out to the park on Aug 1, and we got all settled into our hosting campsite. Steve also works at the park M-F full time as the Facilities Maintenance Supervisor Advanced position, so we did this at the end of his 4pm shift. He didn't even have to drive home to Chilton after work!  What a commute! 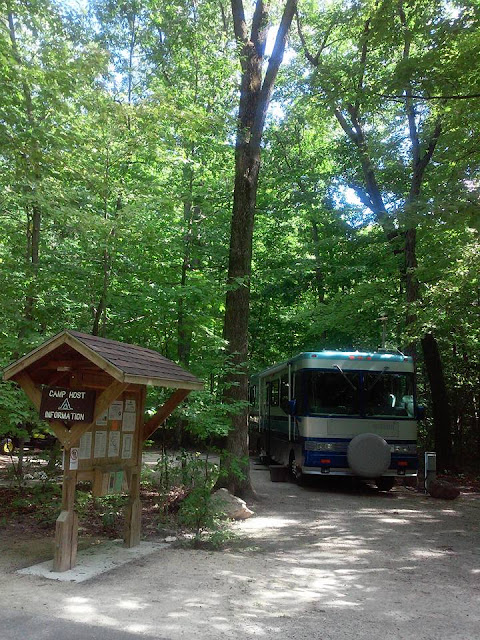 Since we have done camphosting for a couple years now, we already know the drill and just sign the new camphost volunteer agreements. If it's the first time, hosts are asked to go through training, doing certification on driving the John Deere Gator, and doing a background check.  Hosts are supplied with vests, weather radio, cell phone, literature and a first aid kit. 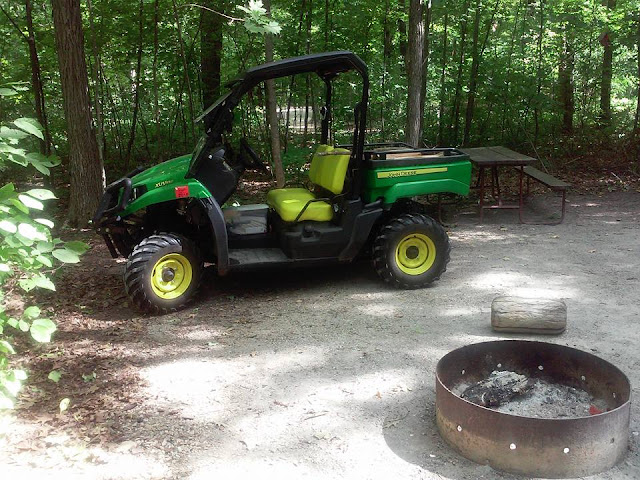 Steve also holds the position of Camphost Coordinator and I assist as a volunteer.  We gather applications, select each year's hosts, and conduct an orientation and training each spring.  It's a good way to give back to the parks, because without the hosts, there are such limited man-hours in the park budget to do the things that the hosts help with.  The main task of our hosts is being at the campsite and giving out information.  Being a "Park Ambassador" as we call it!

If we are away from our campsite, Steve erected this nice kiosk with information right by the camphost site.  Centrally located for the patrons to find out what is going on in the park. 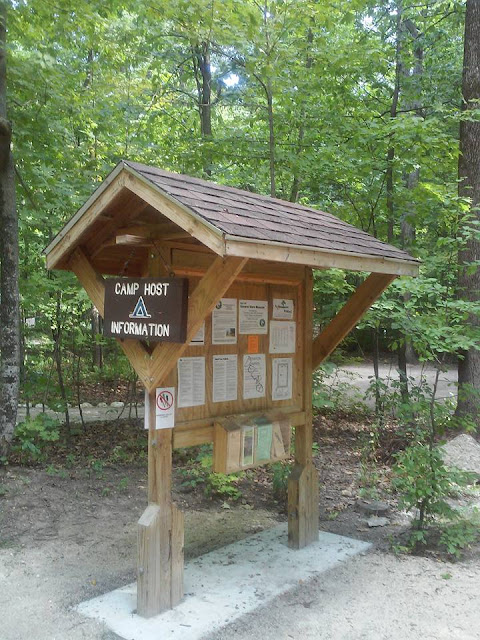 We also clean the firepits in 112 campsites, and 8 group campsites, as needed, plus clean up the grills in the picnic areas. We pick up trash wherever we see it. We use the term "If you SEE it, you OWN it" and pick it up.

Unlike other camphost positions in other places, our job does NOT include bathroom cleaning, collecting fees, selling firewood or confronting unruly guests.  That is all taken care of by park staff and rangers. It's a pretty nice gig!

Our dogs are welcome hosts too, as they are well-behaved and are quiet on the campsite.  We often walk around the park just to meet-n-greet with folks, and our dogs are easy ice-breakers.  Everyone wants to pet the "Little Lassies"  and it's good for their socialization skills too, especially rescue dog Binney who needs all the interaction she can get. 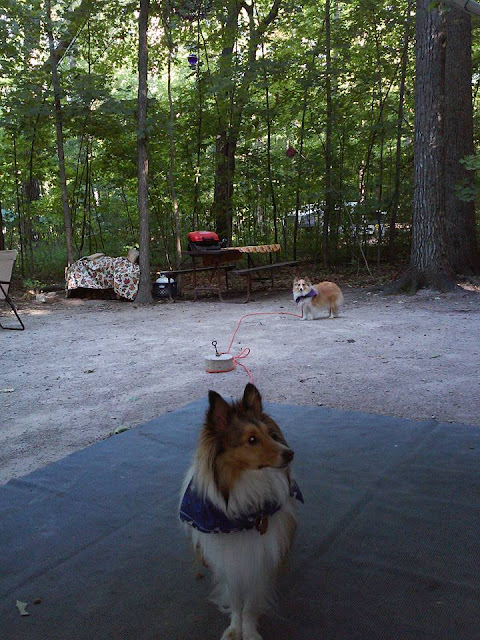 While we were hosting this past week, we also had a couple grandtots come to join us!  Our oldest daughter had an out-of-state work conference, so we gave our son-in-law a break for a few days and took the kids to the campground. Chelsea is 5 and Clayton is 3, just the right age to enjoy camping with their grandparents. 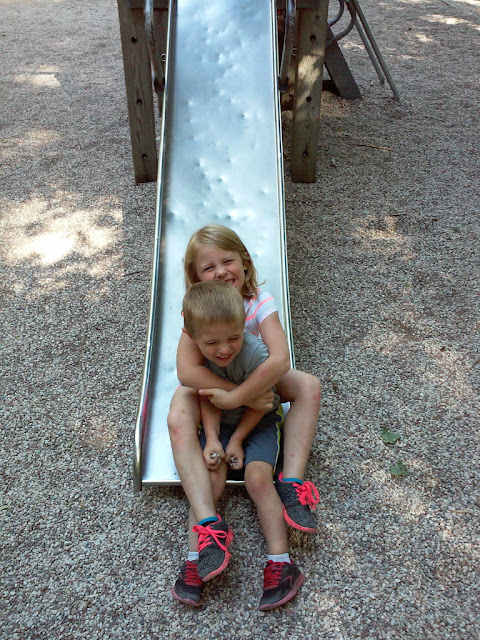 Of course, we put them to work too!  They LOVE to carry around the trash picking pincher sticks looking for "GARBICH" as they call it. 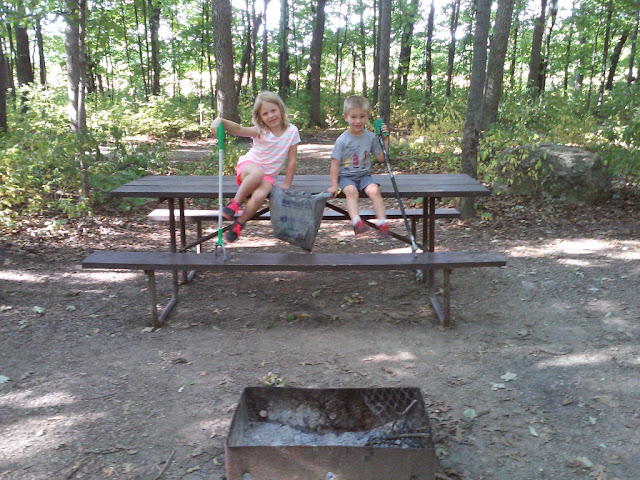 Chelsea announced all on her own, from her own little mind, that we are quote "Helping The Earth" to pick up the trash. awwwwwwww....  so proud. A Little Conservationist in the making.

Because they are not allowed in the Gator, we found another alternative to helping us clean the campfire pits.  We used our red Radio Flyer wagon and a couple buckets and a shovel.  They eagerly went to work with us, helping along the way.  We could only do a few firepits at a time, with the limited bucket space, but we managed. 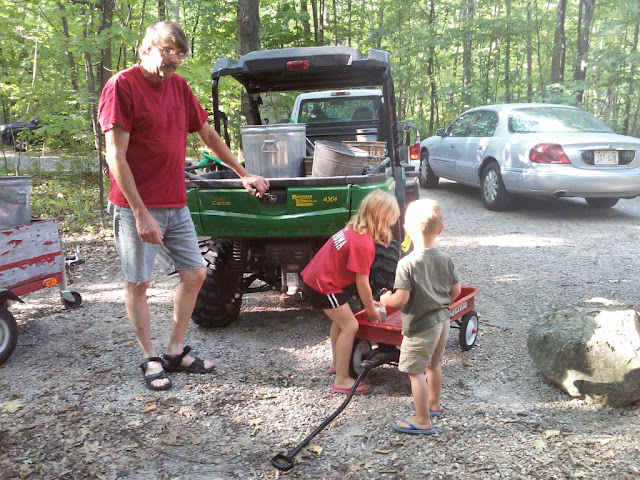 Also, little Chelsea was cussing out the
"bad people"
who throw their
"garbich"
all over the park! 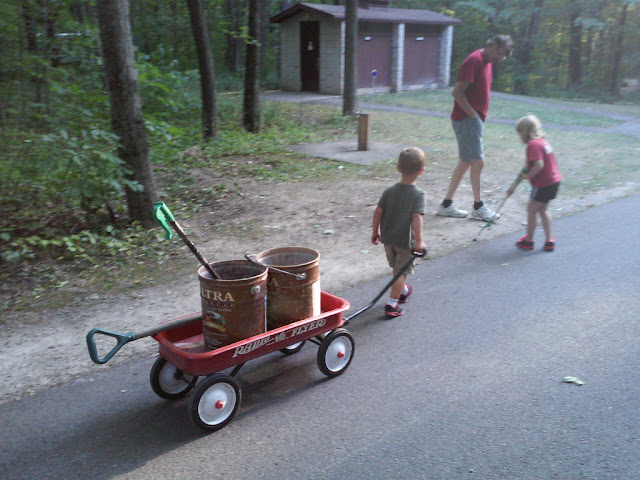 Having grandtots along is a great help with the raccoon problem.  Non-aware campers leave their trash out at night, and the coons drag it off into the woods.  Having small people around means us sending them into the underbrush to clamp on and retrieve the trash that dragged away! LOL 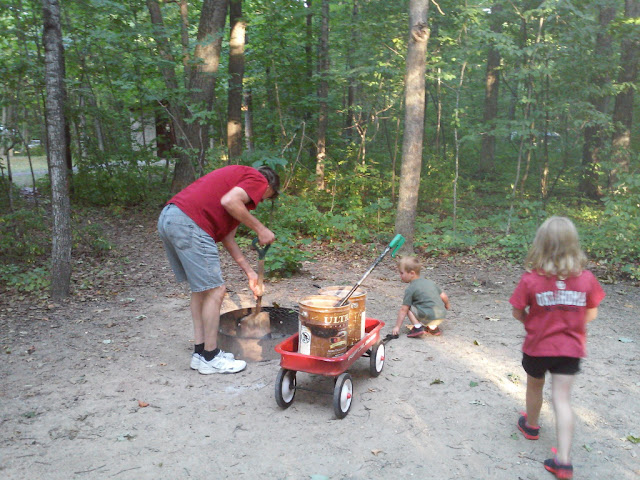 On Thursday, we had several camphosting applicants contact us, of which two couples were wishing to come and "try out" camphosting each for a week stint, in preparation of committing to a full month for the year of 2016.  Being flexible, we decided that we could toss our things into the rig, get road-worthy, and let one couple take over the host site.  The other couple will then take it over on the 20th. They completed the interview process with Steve and the park superintendent, and got some training and information and equipment.

Since we were pretty busy with various grandtot situations, it was a good thing to let them take over and learn about hosting for a short period.  (Understandably, I have been on edge and not sleeping well and running back and forth to Green Bay several times a day anyhow) ...

If things change, we can just toss our things back in the motorhome and head back out to the park again if need be.

Although we do stock our motorhome with dog toys and grandtot toys, little Chelsea and Clayton were happy to come to our house and play with the grandtot toys here, and the dogs were happy to be back home and playing with their house doggie toys too! 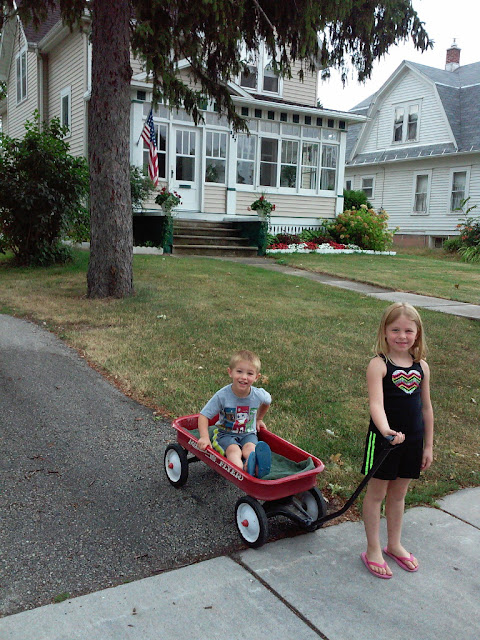 They used the little red wagon to help unload the motorhome with trips back and forth to the house and really were good transporters!  Our own private moving crew.  Hey, child labor laws don't apply when they are family members.  LOL

On Friday morning it was time for them to go back home... and our poor doggies are just LOST without "Those Childrenz" to cuddle and play with.

I went upstairs to get something in the afternoon, and found both of them waiting in the bedroom we have set aside for the grandtot visits.... waiting... waiting... 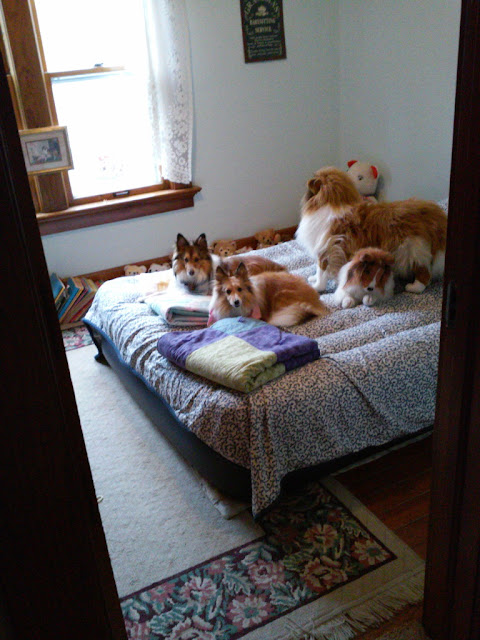 I guess, I am waiting too!
In two weeks it's grandtots Allegra and Mason's turn!!!

Posted by KarenInTheWoods at 11:27 AM