Our Old House Projects and Babysitting Grandtots for a week!

Actually they were really good....  and I only had them from Monday night until Friday morning.  Our oldest daughter had to go out of town on business, and our youngest daughter drops her son at the older one's house every morning at 5 am before work.  So someone was needed to stay at the house for Jameson to come in the door at 5 am... and then transport all three to the daycare at 7am.  Then the older ones are transported to school and back to the daycare until 5pm.  So it's pretty important that they are babysat up there in Oconto instead of down here at my house in Chilton.

Each morning it's a routine of getting them up, dressed, eat a snack to hold them over till breakfast at the daycare, teeth brushing, backpack gathering, coats, shoes and finally strapped into the backseat of the car! Whew! 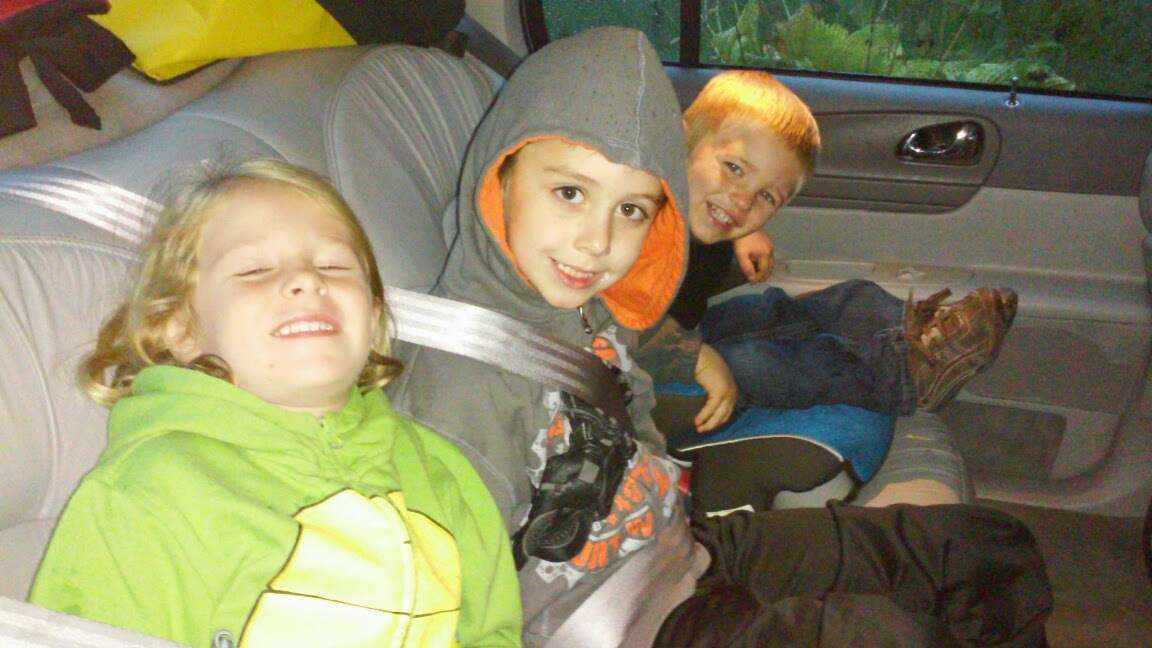 But we got it all done each morning,
with only one tiny meltdown
when a certain Diva insisted her shirt was too loose.  LOL

I was even brave enough to double up and have Jameson spend a whole night as a sleepover!  His parents wanted to finish a coat of paint on their own house's basement, it would be good if the 6 year old was out of their way and they could get it all done.  I let the kids create "octopus hotdogs" for dinner.... 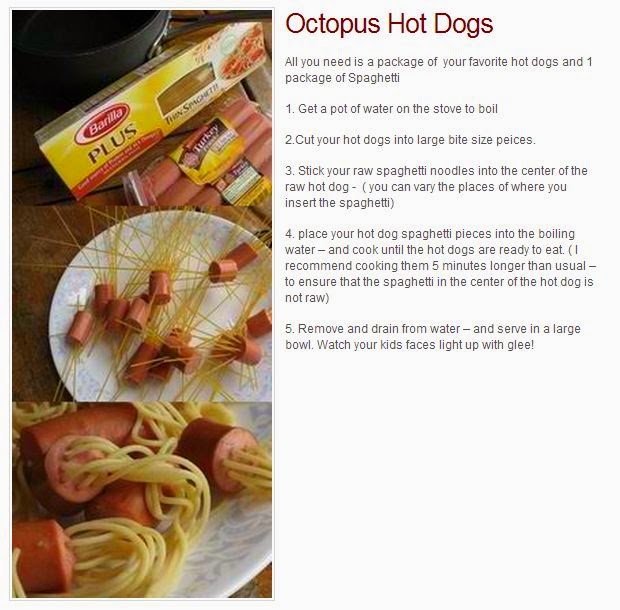 They had so much fun constructing them by shoving the long noodles into each double sized chunk of turkey hot dogs. After boiling them up, they were ready to consume.  Yummmm  (yup, I ate them too)  We also had cauliflower and carrots.  I hope we are making wonderful memories! 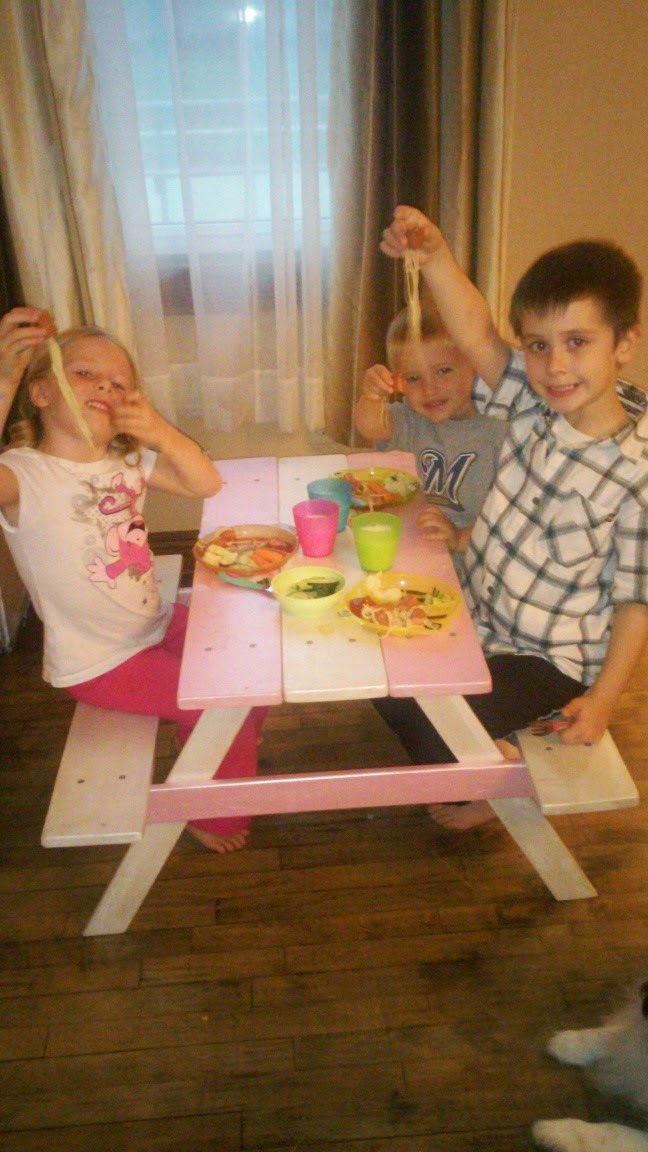 While the kids were gone during the day, I had brought my sewing machine along.  It was kinda fun sitting at my old dining table where I had sewn for so many years.  Years of sewing at that table where I made all of my kids clothes, their baby quilts, and even my business suits.  I also sewed many many ruffled country pillows in the 80's and 90's on a contract agreement with a craft seller who had me do the sewing for her.  Later Steve refinished that dining table and we gave the set to our oldest daughter for her home.

The boys were kept busy with my tablets creating race cars and playing the "socks and underwear matching game"  ... and Chelsea wanted to do some "needling" (her name for quilting) 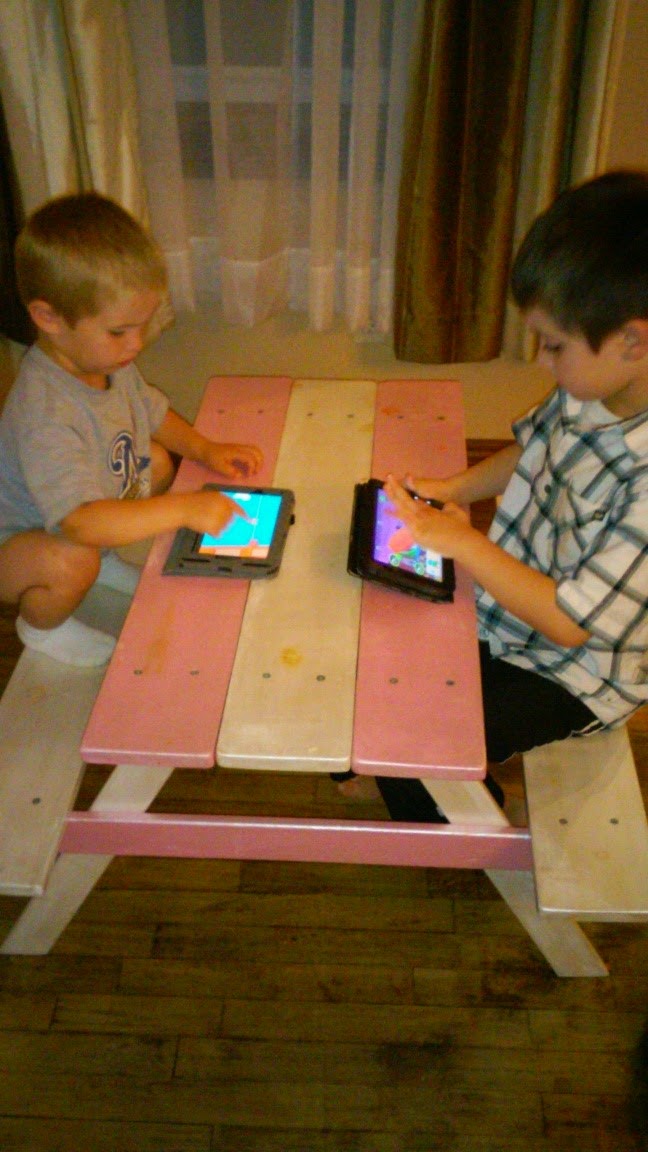 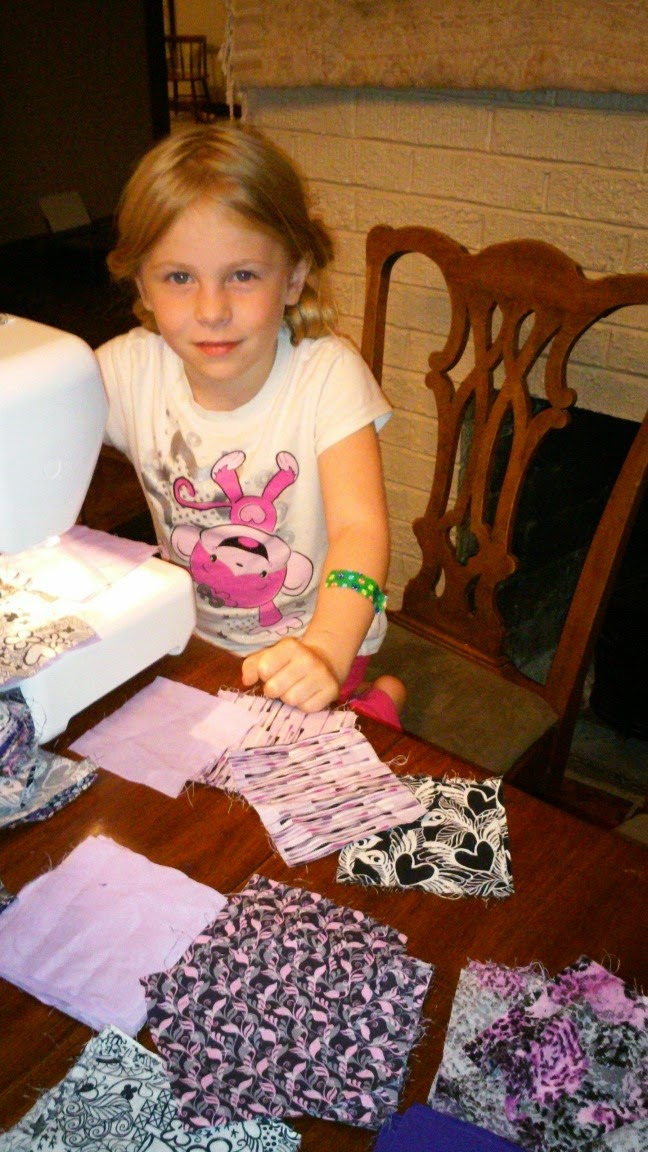 Here is a little Utube clip of her working on a quilt with me:

The week went by fast, but I missed being home with my Steveio. We try to never be apart this long, but sometimes ya gotta do what ya gotta do.  Because of all the turmoil in Chicago, and snarled up air flight schedules, Erin's plane was first delayed for a late Thursday return, then later cancelled completely.   Oh well, I spent another night up in Oconto.... and got to share watching the Packer - Viking game on tv.  The little Cheesehead Fans wore their jerseys and had bowls of Cheetos to snack on while watching their favorite players....  (Aaron Rogers and Clay Matthews)  ... 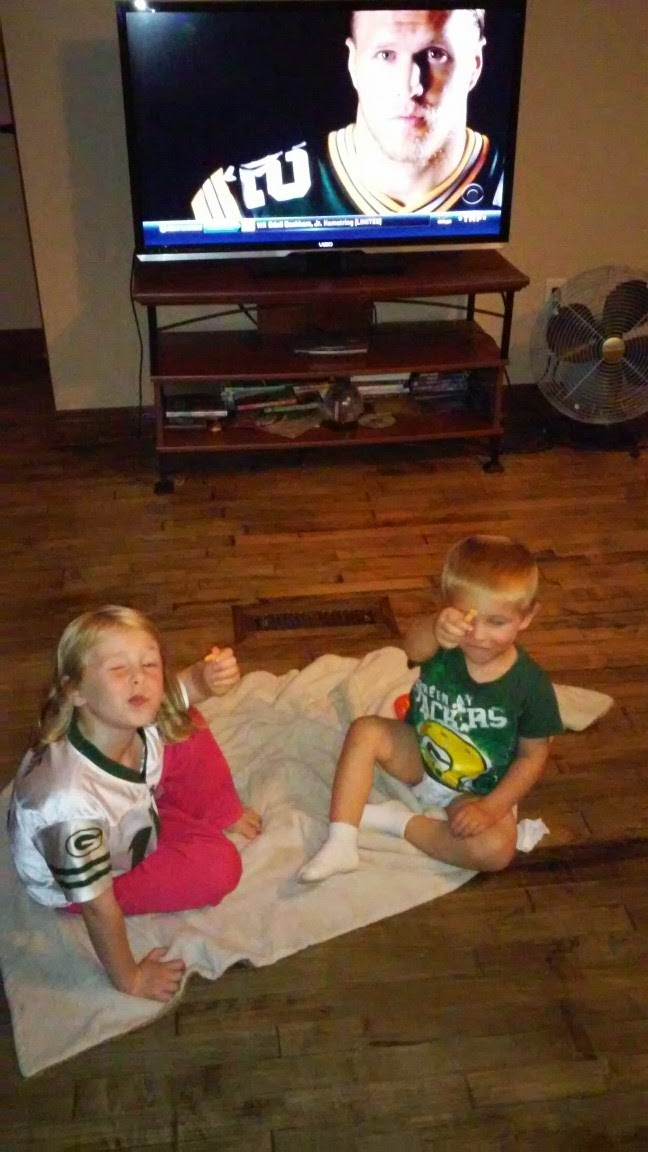 They cheer loudly for the players, and understand the concept of
"downs" meaning they get three more tries if a First Down is achieved.

And, of course, the Packers won!

Friday morning all went smoothly as I dropped all of the kids off at the daycare.  It was a sad goodbye for me, but they went on to play with their friends. Normal routine --- uninterrupted --- for them so they could stay in their schools and daycare while the parents all had changing schedules.  I was so glad I was able to help out.

But then this very tired Grandmuddah went back to the house to pack her bags, load the car, and head on home to Our Old House in Chilton.

The last of my tomatoes had ripened and needed to get canned.   I spent an enjoyable afternoon canning up the ripe ones....   skimming off the peelings by simmering them and then plunging into ice water.  Then cutting up into chunks and canning with a bit of lemon juice and salt in quart jars.  PING PING PING the sounds of jars sealing is music to my ears! 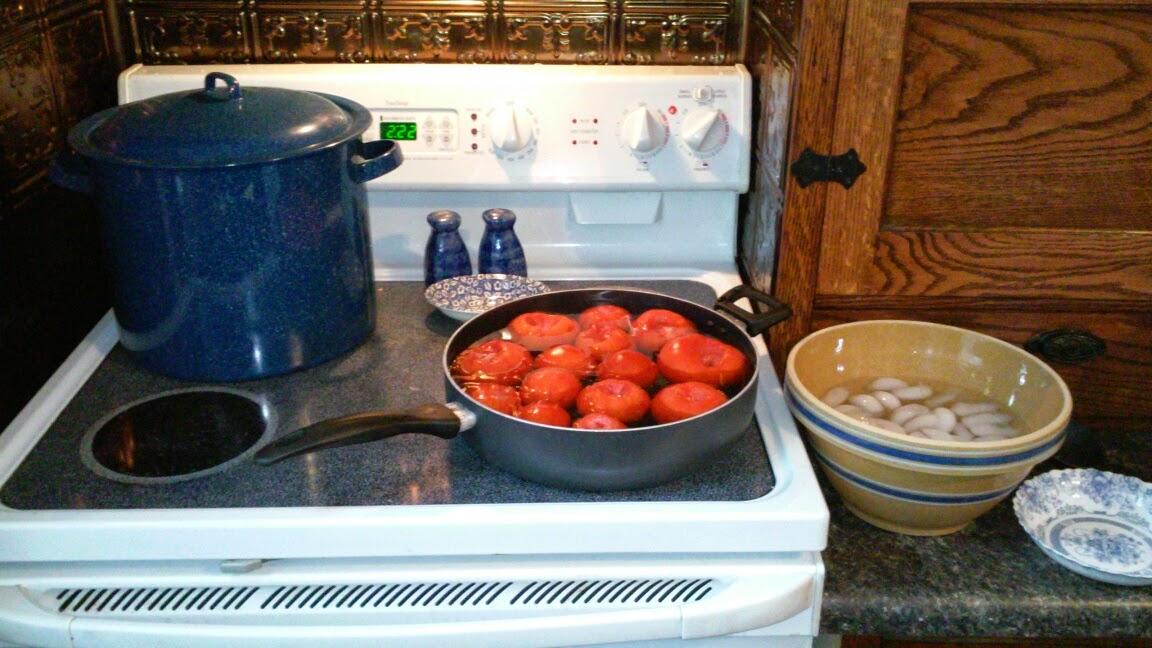 The very green tomatoes were brought in my biggest bowl, and the half ripe ones set out on the counter to finish ripening.  I put the green ones in layers on trays with newspaper covering them and they should ripen up during the week. 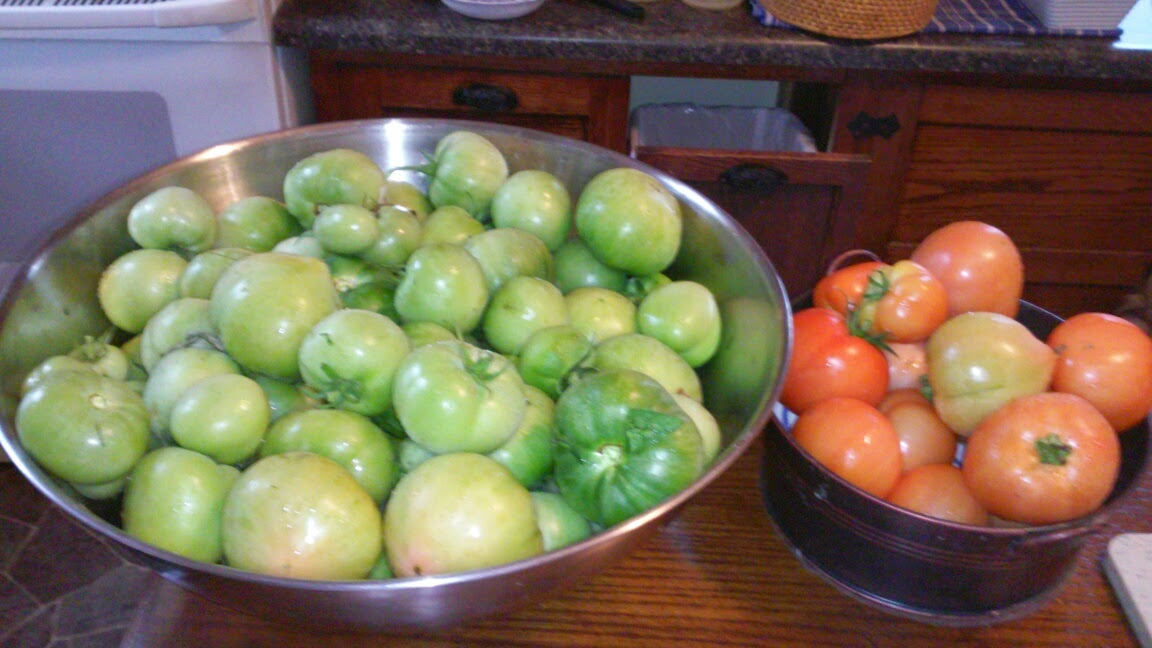 After a wonderful welcome home from my Stevio, it was great to snuggle up in front of our fireplace and reconnect after being apart so many days.  We don't like to take such long periods of time away from each other, and try to do just about everything together.

We got a few yard things done on Saturday but it was raining and cold and icky most of the day.

One project I wanted done was to buy some grow lights.
We found four old iron bed rails in the garage attic,
and spread them out over the old sawhorses in the basement.
Recognize this room Paula, Laura or Debbi? 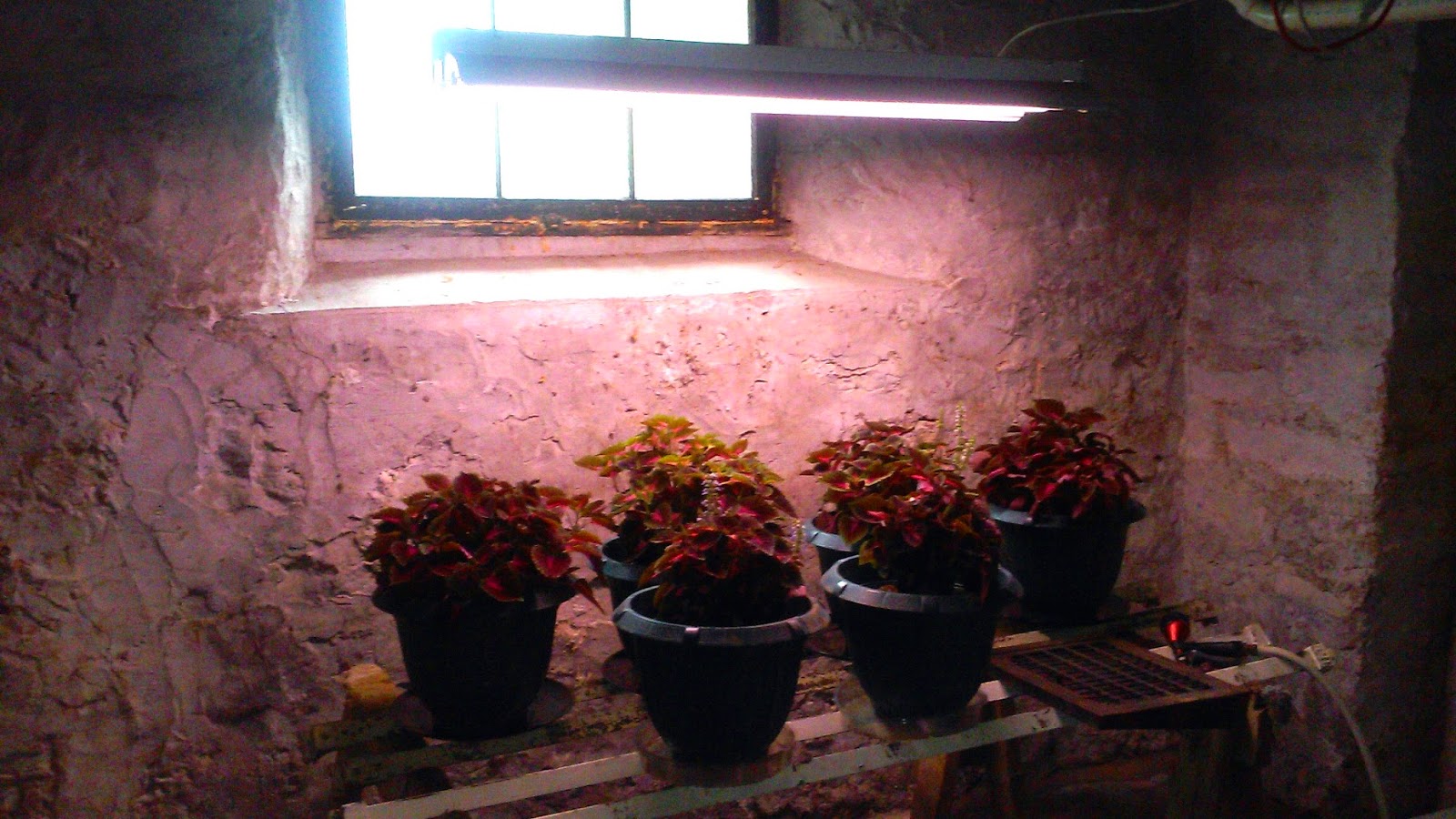 I set out my pots of coleus that I have been prepping to winter over in the house. I have kept these same coleus strain of plants going since the mid-90's.  I keep snipping off and rerooting and wintering over inside.  The last two years I had them set in the guest bedroom up on the second story, but this year I will try the basement and have additional light from the grow light bulbs.  We set them on a timer to give an extra 4 hours of daylight now, and will adjust to about 6 extra hours in mid winter.  In the basement it will be easier to water them and not worry about drips from leaking flowerpots.

With the impending cold weather, we also turned on the furnace.  ACK!  Heat bills, here we come!  We also started to turn on our electric mattress pad heater on the bed at night. Yes, winter is on it's way, and there isn't much we can do about it.

One project for Our Old House is to add a heat duct to the half bath on the main floor.  The room originally was a closet near the back door of the kitchen.  The previous family, the Kopf's, had added a toilet to the closet to make an extra bath.  With four girls, that kinda made sense, eh?  But I can tell you, with NO heat vent in that room, it's one awfully cold blast to the hiney to sit on that seat.... it's in the back hallway of the house between two different exit doors, and not really in the main heated area of the house.  brrrrrr  You do manage to get in, do what you gotta do, and get right back out again fast in the winter months! 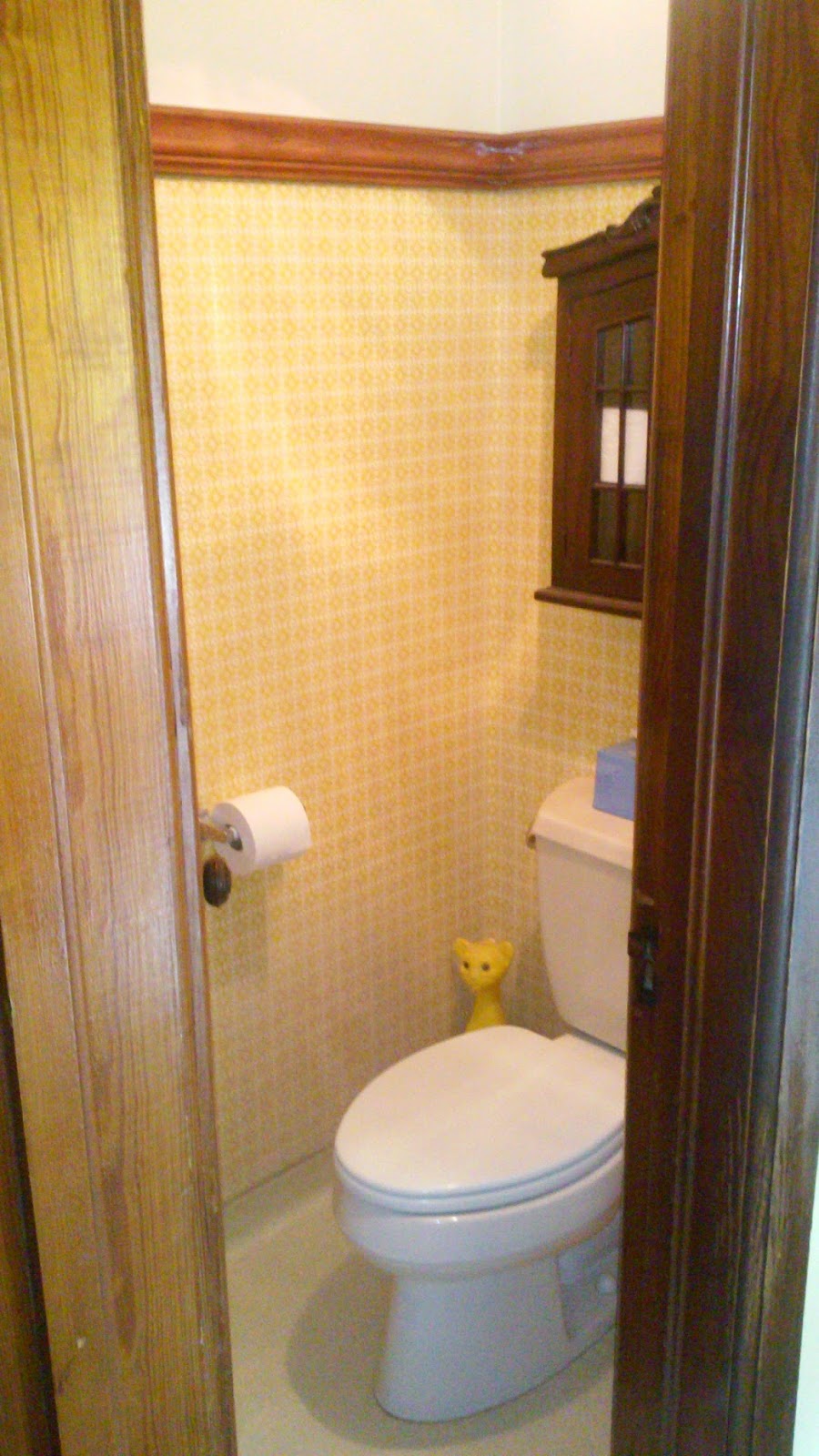 We still have the yellow kitty cat toilet brush holder from the previous owners!

There was never a heat duct in there of course when it was a closet, who heats up their jackets and umbrellas?  We had an extra register grid on hand from when we adapted the kitchen and changed the ductwork around... so we were all set to add new ductwork now, and top it off with an old register to look authentic.


Steve dug out the old register from storage in the garage attic and I cleaned it up. He figured out all the ductwork needed and measured and realized it won't be such a hard job afterall.  We ran to Menards today and got all the proper ductwork and boot unit to put it all together sometime soon.  I just LOVE these old copper register grids and so glad we saved this one to use again. 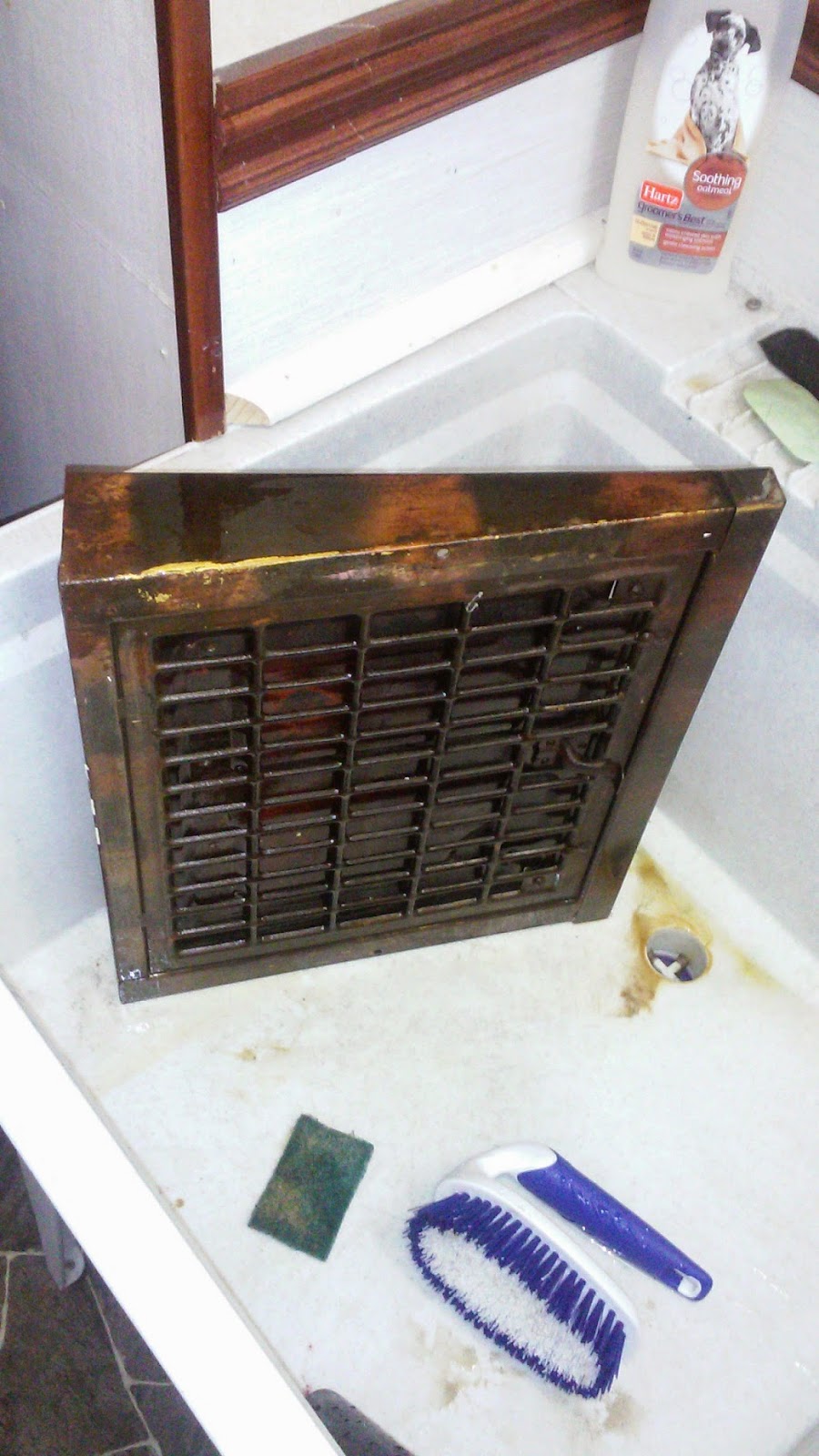 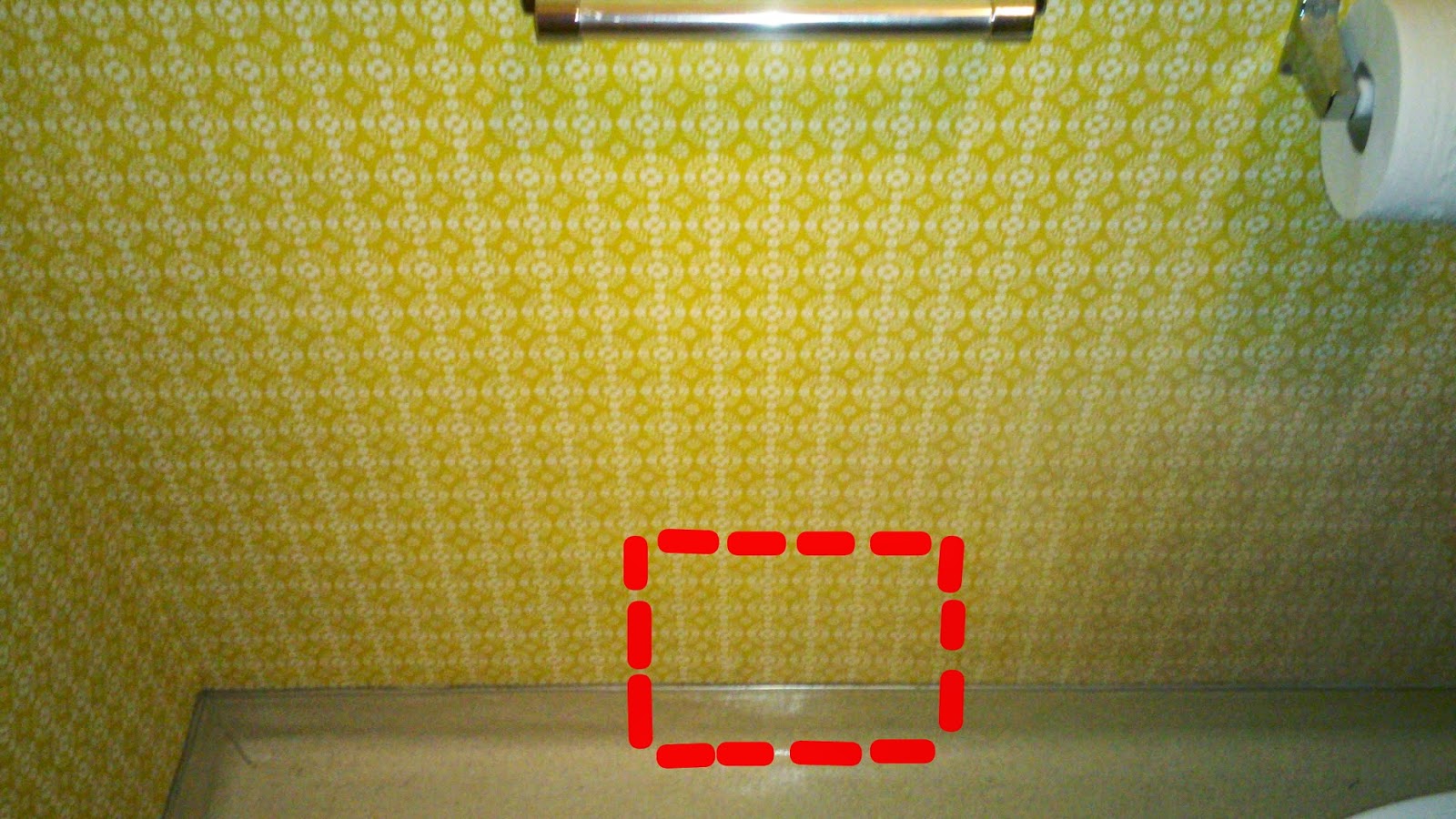 The other thing this little bathroom lacked is a sink.  For the last year or so, after using this bathroom, we have always walked into the kitchen to wash our hands at the kitchen sink.  That is kinda strange, and not quite what we want.

Recently I saw a program on HGTV called "Rehab Addict" where this spitfire of a young gal named Nicole Curtis rehabs old homes that are slated for the wrecking ball in Detroit and Minneapolis. A link:  The Rehab Addict on HGTV   Instead of ripping out and putting in all new stuff, she rehabs and reuses old stuff whenever she can.   I think she is my new HERO!   I watched enough of her shows at our daughter's house to know I will take the time to watch them online now.  (we don't have cable so don't get that station here)


She had found a nifty corner sink for a house that had a tiny little powder room bathroom. Today while at a few stores,  I tried to find one like it, but kept coming up empty handed.  Has to be special ordered they said. So I bit the bullet and searched online.  I found many in the $100-300 range, but most were still too big for the bathroom we had. Finally at this website: Vintage Tub and Bath  I found the PERFECT one! On sale for only $69.99 plus FREE shipping!  Wheeee


After the heat duct is done, this will be next on Our Old House list of projects.... Just have to pick up a cute faucet and some drain pipes and fittings, and Steve can tackle this one too. 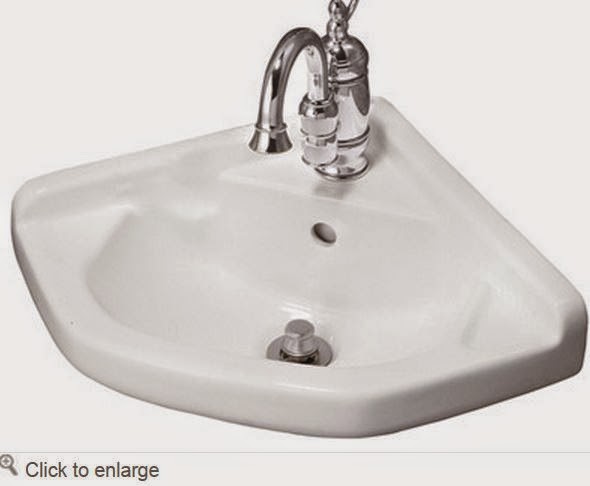 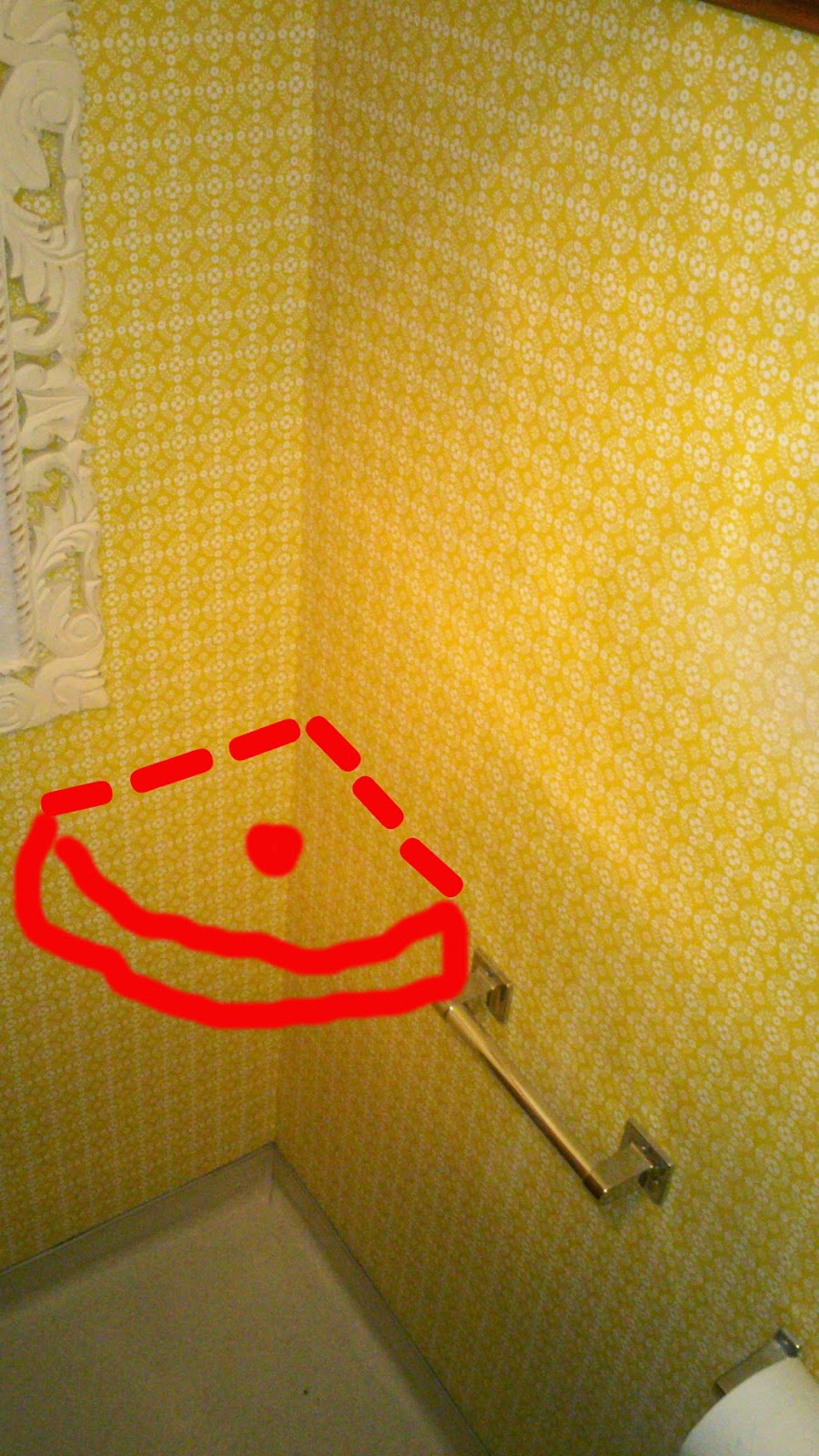 Steve is also going to reverse the door in that closet. It opens inwards, and we will want it to open outwards.  Just pry off the jams, hopefully not cracking any of them, and reversing it to open outwards into the back hallway.  It should work, but the door will have to be in the closed position all of the time to get by in the hallway.  Now with heat going in there, that should be okay.

By the way, I LOVE the tacky yellow wallpaper in there, and it's in great shape, so I am leaving it. Steve's brother Pete gave me a cute original artist creation with homemade paper in an interesting frame that just suits the room perfectly.  We stained and poly'd up some oak trim for a top rail, and we added a "garage sale find" cabinet for holding essentials (toilet paper) 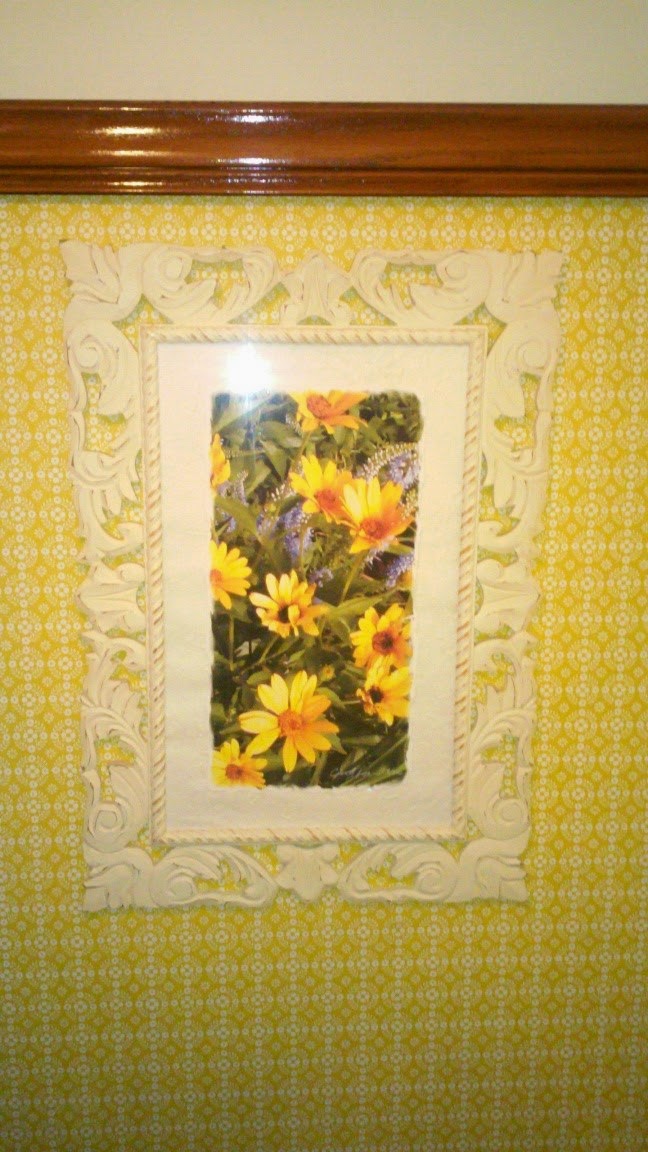 Then my friend Paula gave me this wonderful light fixture.
It had been in her sister's house and she now passed it on to me. 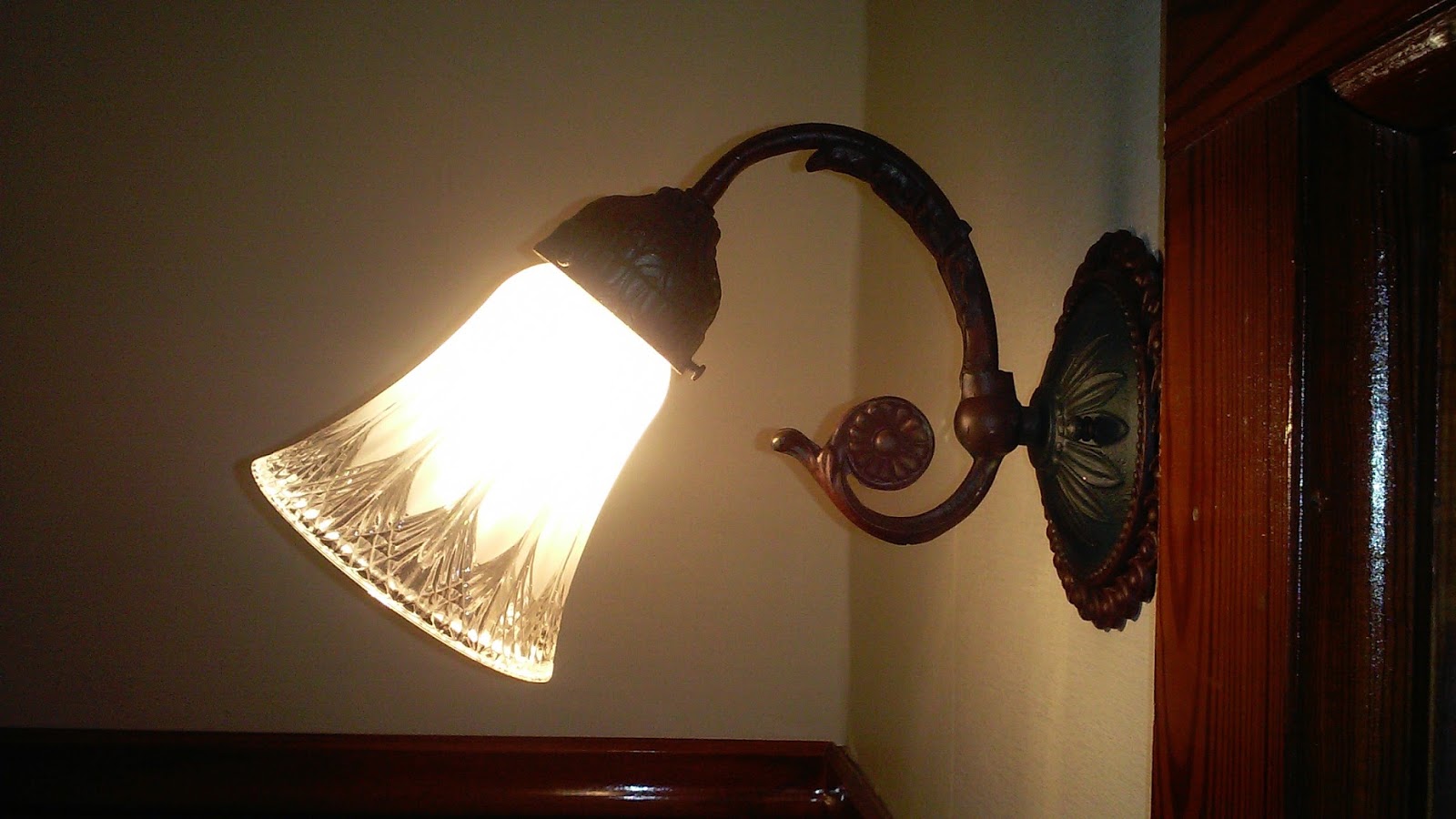 I think Nicole Curtis of Rehab Addict would be proud of me!

Posted by KarenInTheWoods at 9:02 PM