Here is another project I thought I would tackle before the cold winter sets in. The front door.

Our 100 year old wooden front door has a large pane of plain glass... about 60x25.  Normally I keep a lacy curtain over it.  But during the winter months, on terribly cold days, frost sometimes builds up on the inside glass when the curtain is hanging in front of it.  Mainly along the bottom and in the corners.  It's ruining the wood along the edge of the glass when the frost melts.  If we take the curtain down and with enough air circulation, the frost goes away.

I was thinking.... (and inspired by the HGtv program Rehab Addict), that I thought I would try something.... Hmmmmmmm ...

I bought some assorted stencils, and stencil spray-on adhesive from a craft store.  Then I went to Menards (it's like a Home Depot or Lowes) where I found a faux etching paint that looks like an etched window when applied. It does not permanently etch the glass, and can be removed at any time with a razor blade and some acetone. 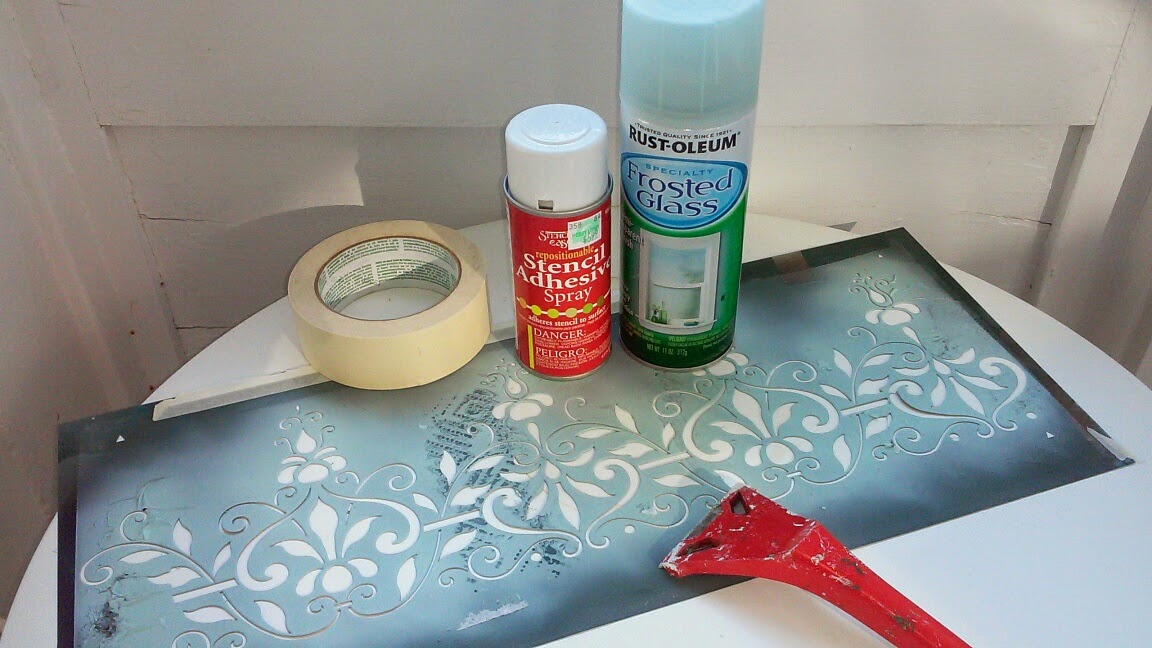 I practiced first on a mirror and it came out pretty cool! I had a lot of overspray because I did this outside and it was windy....  The stencils kept lifting up in the breeze, even with the adhesive spray. 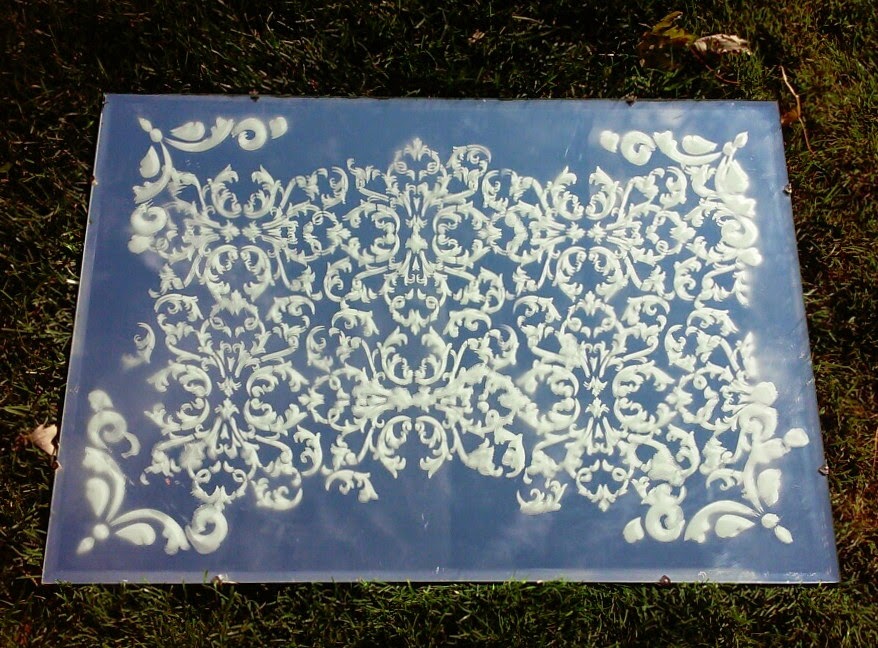 When Steveio got home from work, I prompted him to help me remove that VERY heavy front door and lay it on sawhorses indoors out on the front porch. I draped it with tape and paper towels for overspray protection on the wood. 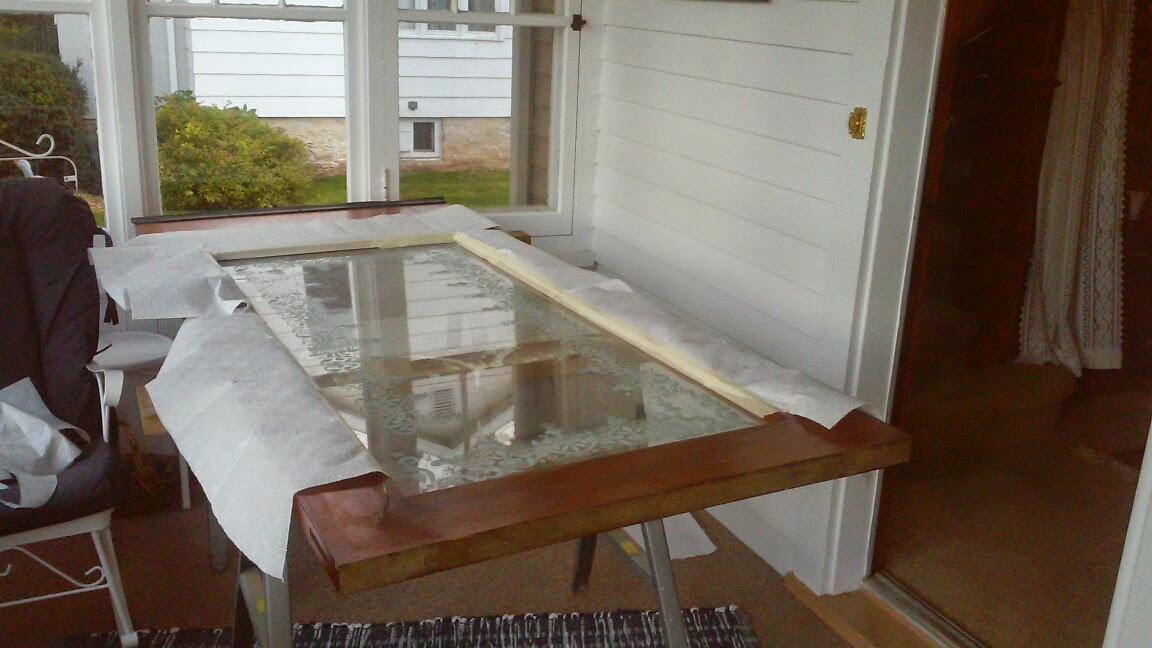 At first I tried one stencil, and didn't like it.
So I scraped it off with a razor blade and re-cleaned the window.
It was easy to get rid of the mistakes!

I finally settled on this pattern: 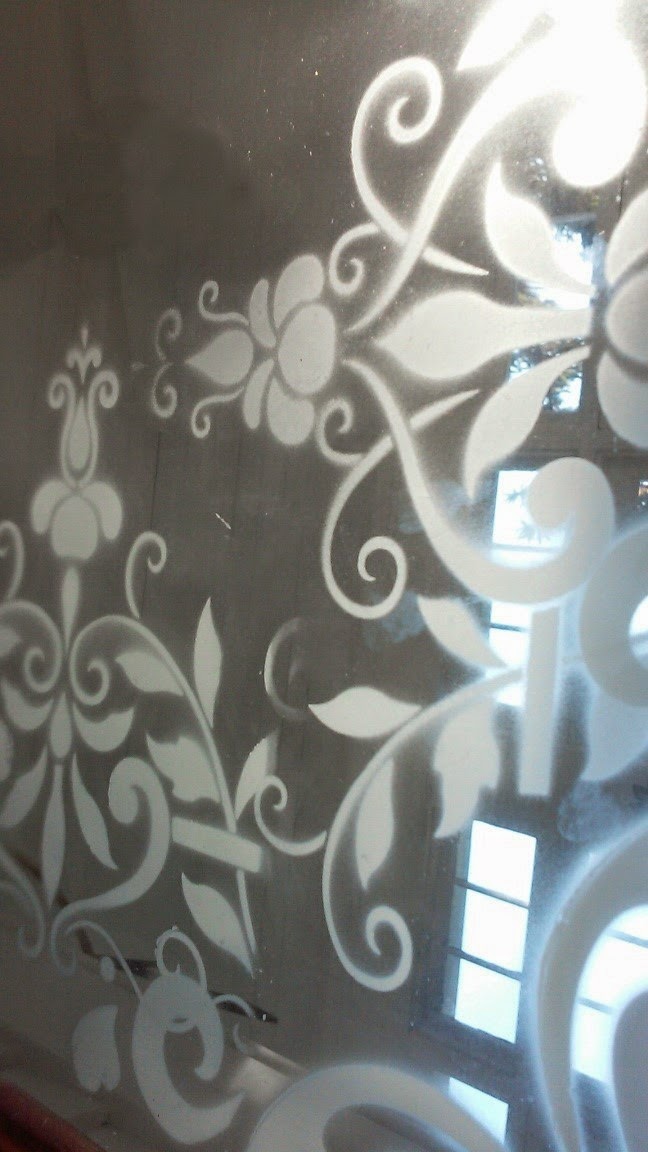 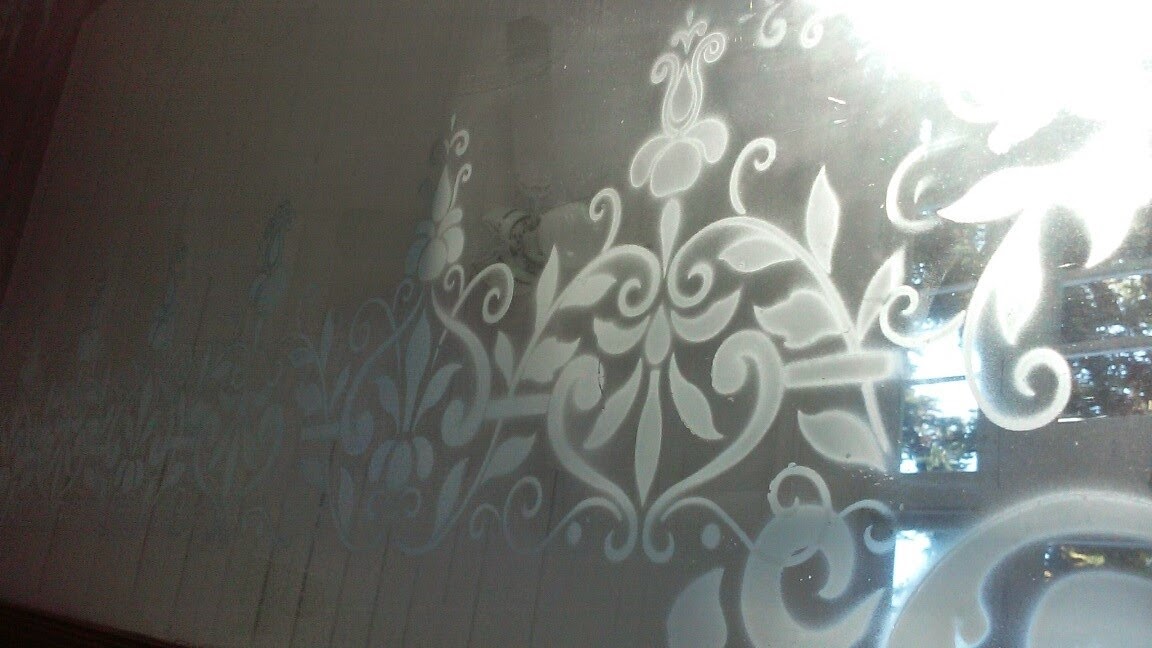 It was frustrating to work alone as just one person, because the adhesive glue on the bottom of the stencil would sometimes remain stuck to the glass.  I had to have someone hold the stencil up out of the way while I could clean the area with a razor blade and lay the stencil back down in place to respray it. 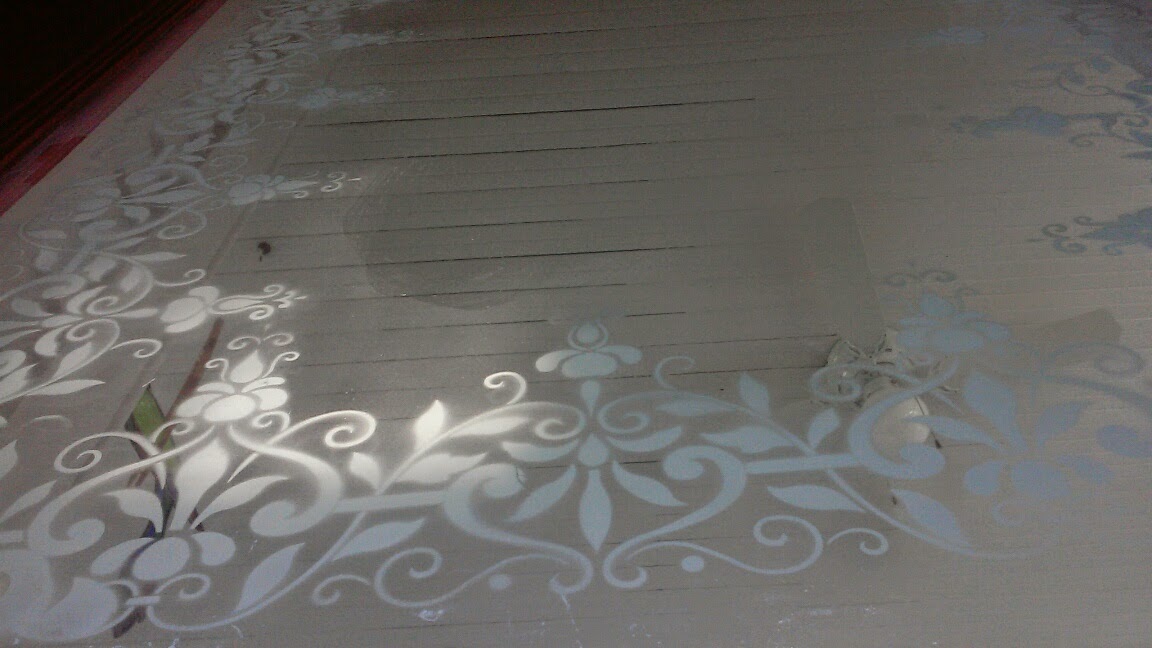 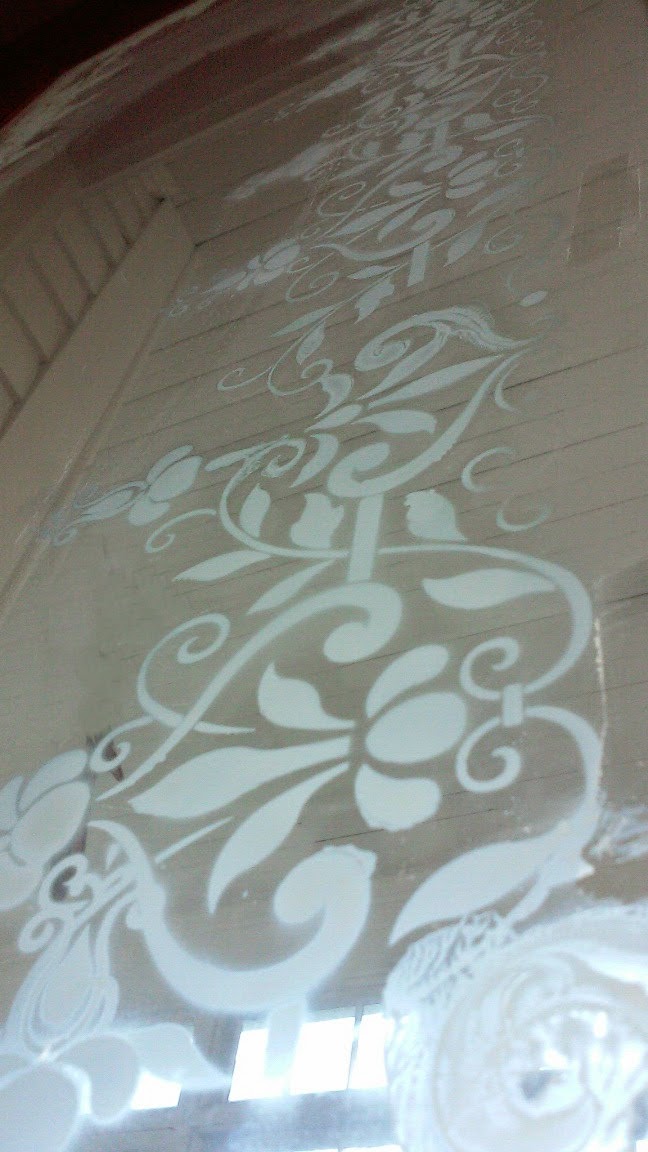 If I had another set of hands it would have been easier.  Steve was outside cutting the lawn so I couldn't ask him to help. I think if I did it again, (and I may redo it) I would have an "assistant" hold the stencil up in the air in between sections, rather than lay the stencil aside on the plastic covered table. The stencil stuck to everything and had wet paint on one side and sticky glue on the other side. ARGGHHH!!!!

I like the overall appearance of the lacy border.... 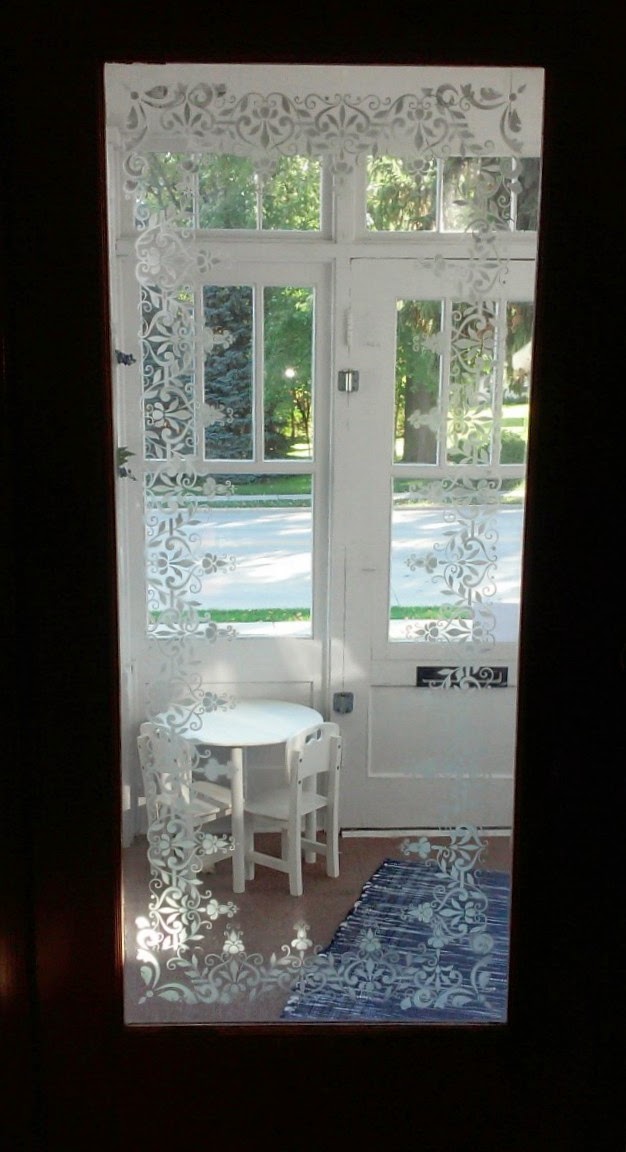 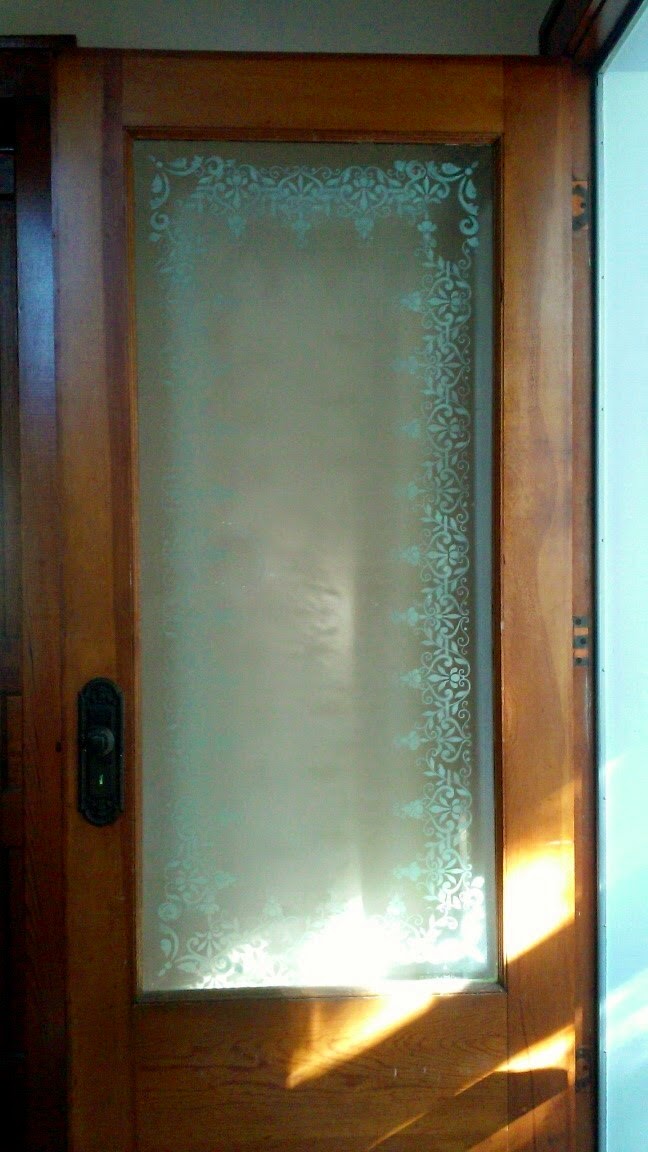 It's kinda hard to photograph it, being white against the outdoors..
or against a cream wall, but you get the idea.

I might add a center design cluster... not sure yet.

Another thought is to buy a jar of the frosted window paint and do it again with a brush instead of spray.  I am thinking I would have more control with the stencil and a brush in sections instead of big sweeps of the spray. This frosted paint goes on kinda translucent and it's hard to see if you have enough spray in each little section of the stencil.  You can easily spray too much or not enough. It later dries to a more frosty etched appearance.


I am thinking I might tackle my french doors next and put a lacy pattern over each pane of glass.
Then my messy Loom Room studio can't be seen from the dining area.... 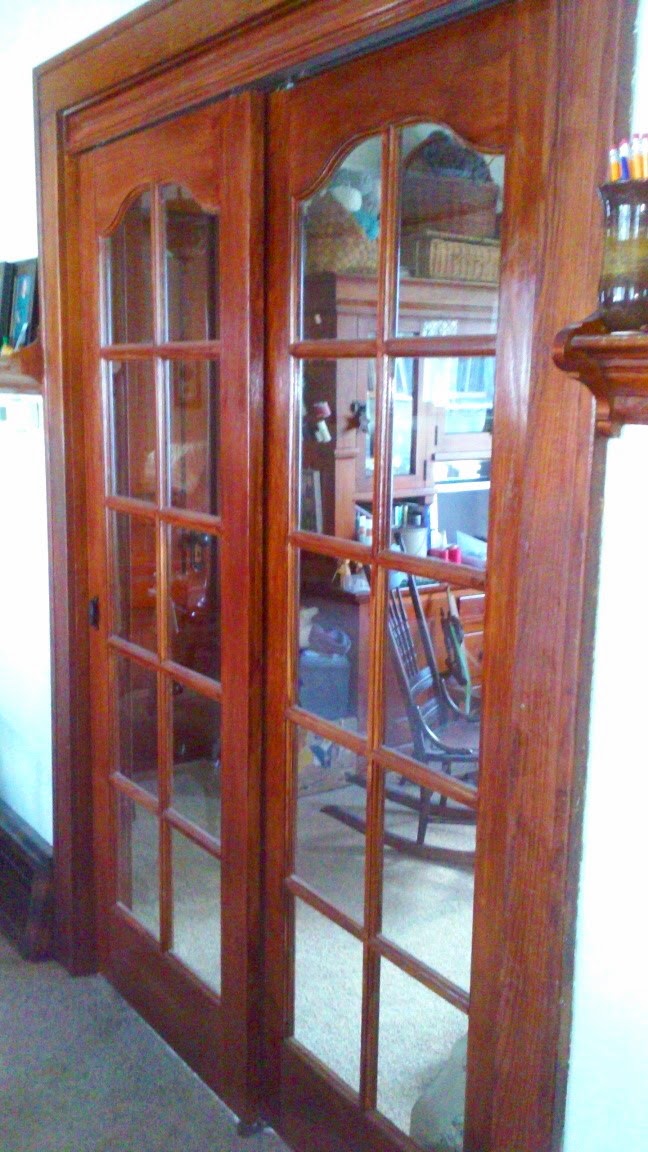 I have a few stencil patterns to try out.

It's a lovely fall day and the sun is shining, though it's still pretty cold out.  Being October in Wisconsin, that is to be expected.  Some more of my tomatoes ripened over the weekend so I should get those canned up this afternoon.

There is always something going on in Our Old House.

Posted by KarenInTheWoods at 10:58 AM