A while back, I ran across a pretty spinning wheel on Craigslist.  A gentleman was clearing out his deceased mother's home in Door County and had a number of fiber tools for sale.  I snapped it up at a good price and brought it home.   (he later called me back about another spinning wheel that I also bought, more on that in another blog)

I looked around on the internet and researched until I found the maker of the wheel, it's a Daneker wheel.  Some fiber websites of spinners on a list insist that these are just decoration wheels that they do not have an orifice and are not made to spin.  But some other websites said they do work.  Hmmmmm  It has all the features of a working wheel, including an orifice for the fibers to feed through. It's mainly constructed as a flax wheel, but can spin fine wool yarns too.  I only spin fine wool, not thick stuff, so I thought I will give it a shot.

It was missing a few key pieces and needed a good cleanup....
*Craigslist photo* 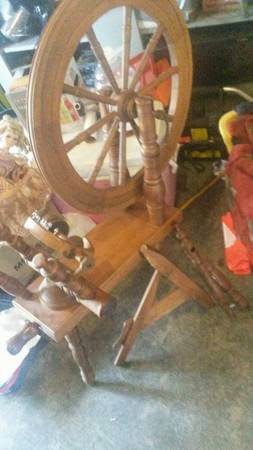 I tied on a string to emulate the missing pittman arm, and put on a drive band. Voila--- I got it to spin!  It needed some parts replacing and a good cleaning, but all in all, it was a working spinning wheel.

A few months ago I met a man named Chuck Spann, at our local weaving guild meeting.  He makes drop spindles, and refinishes spinning wheels and makes tools and supplies.  He lives about 20 miles from my home, so after a phone call, he said come on over!  Here is his card: 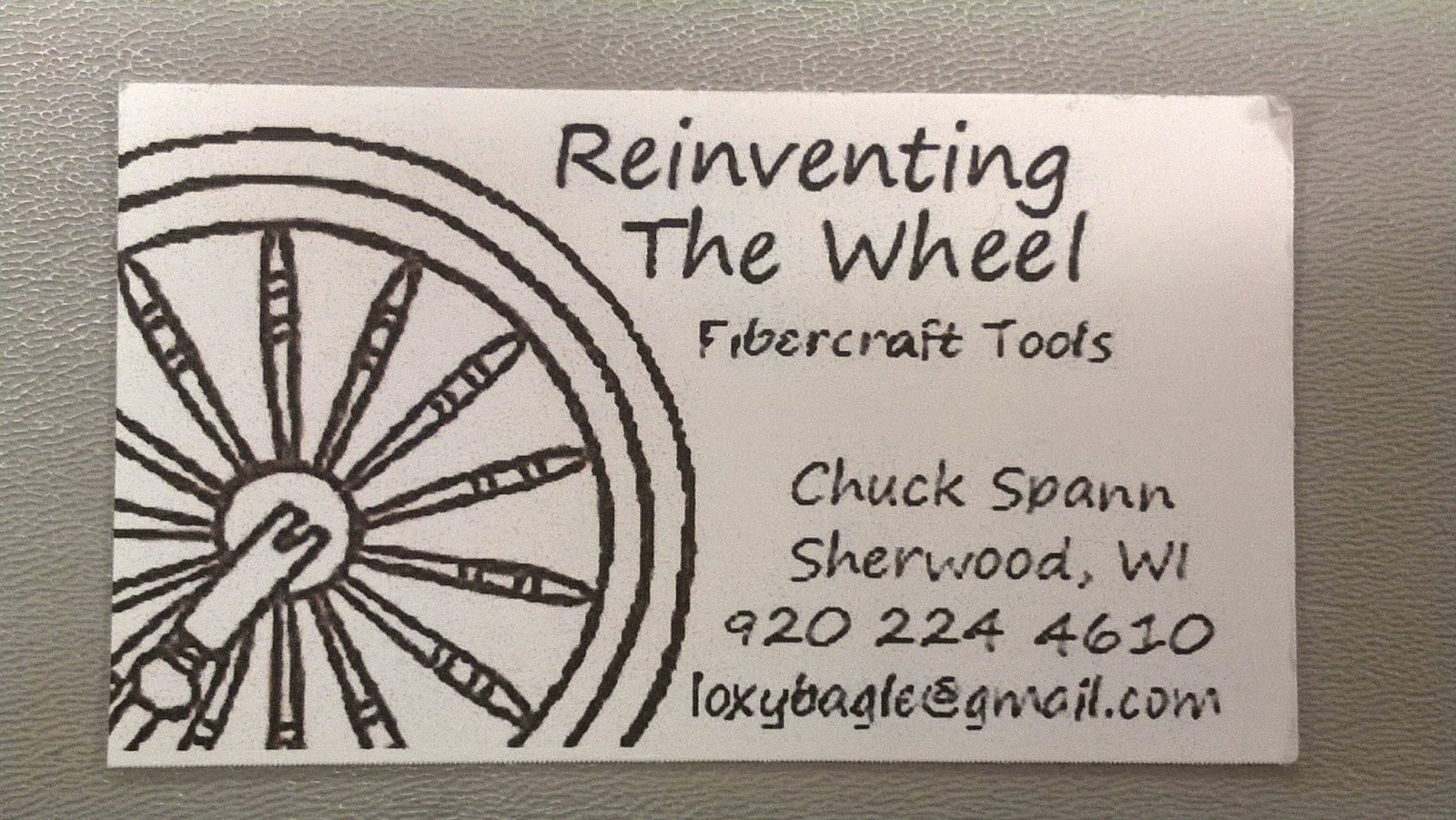 I told him I was in no hurry, as he had a few other projects to finish up, plus he works full time at a boat builder in Manitowoc.  He had just finished up working on another wheel just like this for someone else.  Not only was he going to make the missing parts, but he was also going to make me three larger bobbins in contrast to the one smaller one that came with the wheel. 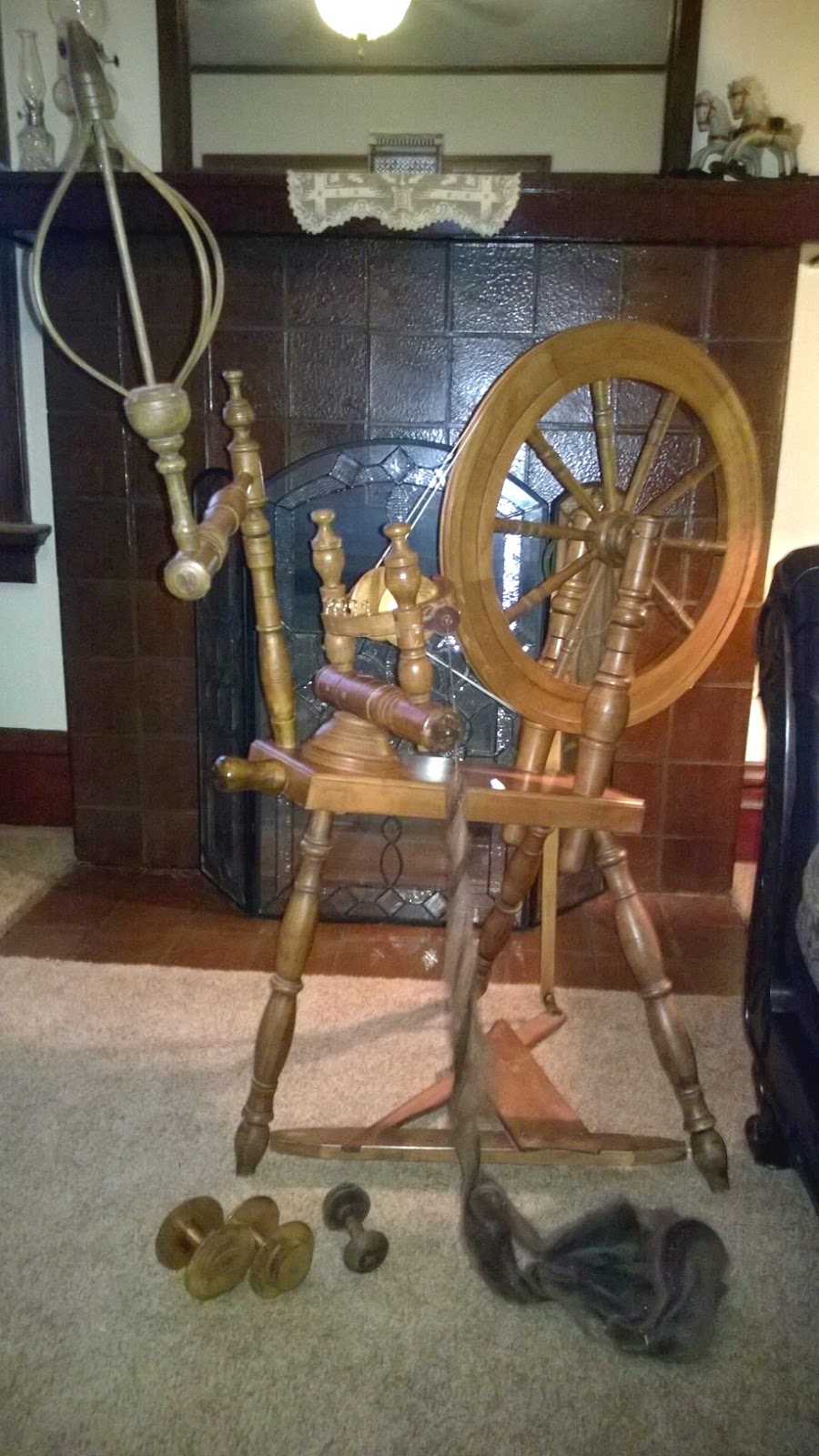 Here it is in all it's glory.... and just gleaming with new wax too.

(I hadn't sent the flax distaff along,
so it didn't get waxed yet--- I will do it myself)

He created three larger capacity bobbins for me....
each one perfectly balanced and true to round for no wobble
(the old one wobbled) 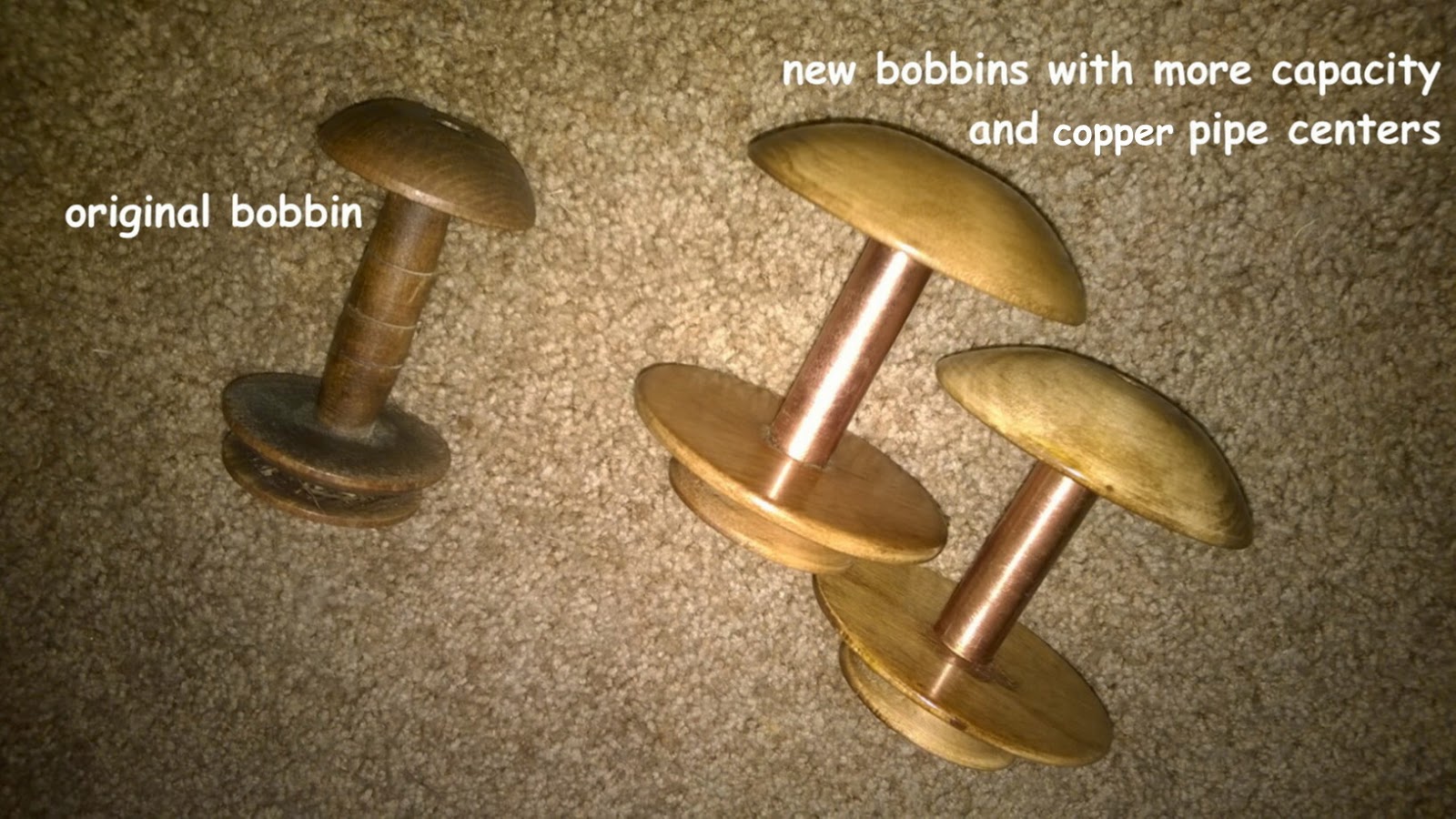 The flyer is able to accommodate the larger bobbins easily. Now I can spin more yarn per bobbin (less joins later in projects when knitting)  He also replaced the old bent and rusty hooks with new smooth shiny ones that won't bind the fibers. 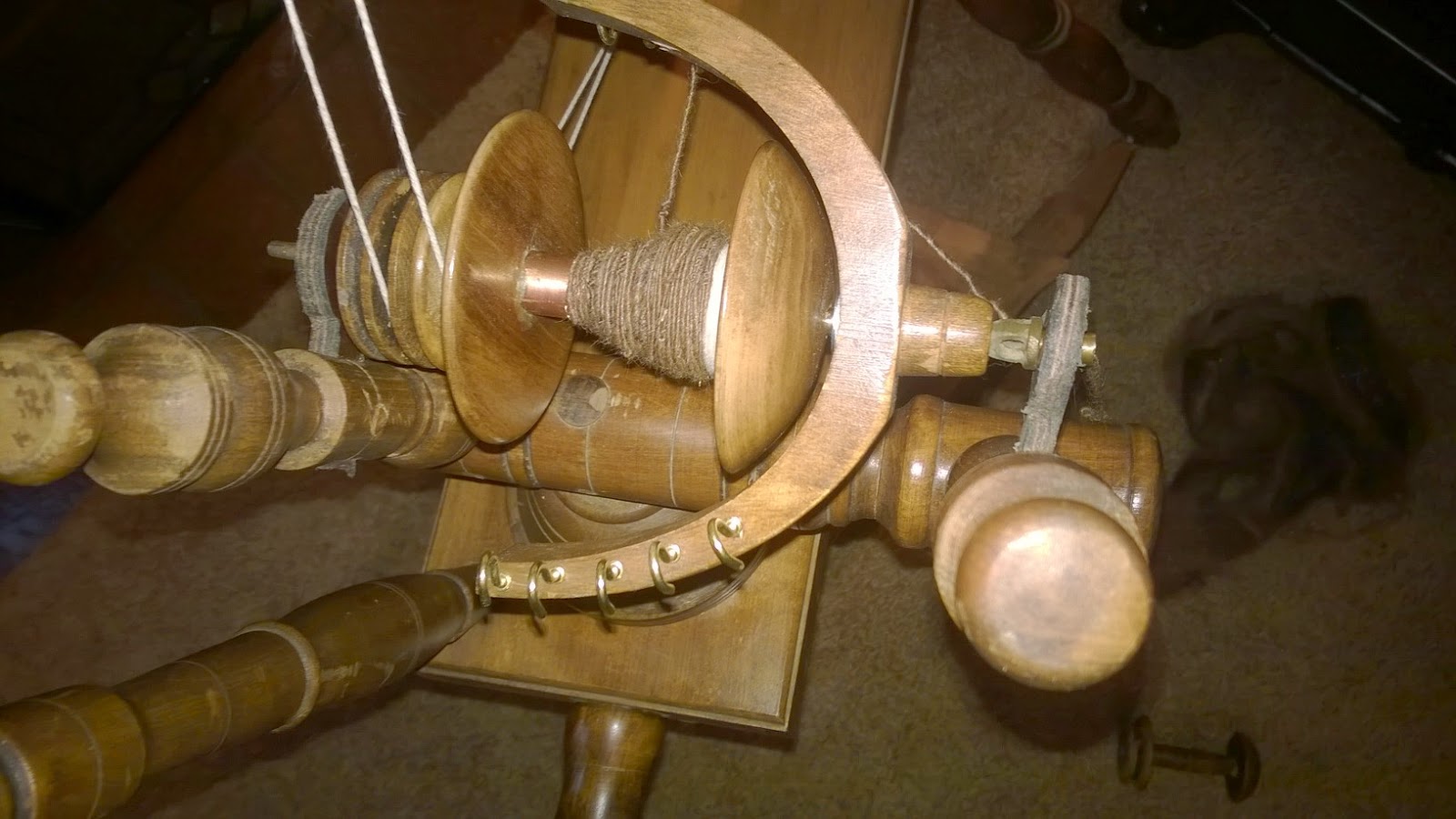 He made a new pittman arm to go on the wheel shaft from the treadle.  The original was missing and he had to figure the exact height to work properly.  He also added a metal "keeper" to slide over and lock the pittman arm into place on the curved shaft of the wheel.  Less easier to knock loose or break this way.  It "keeps" it in place when in motion. 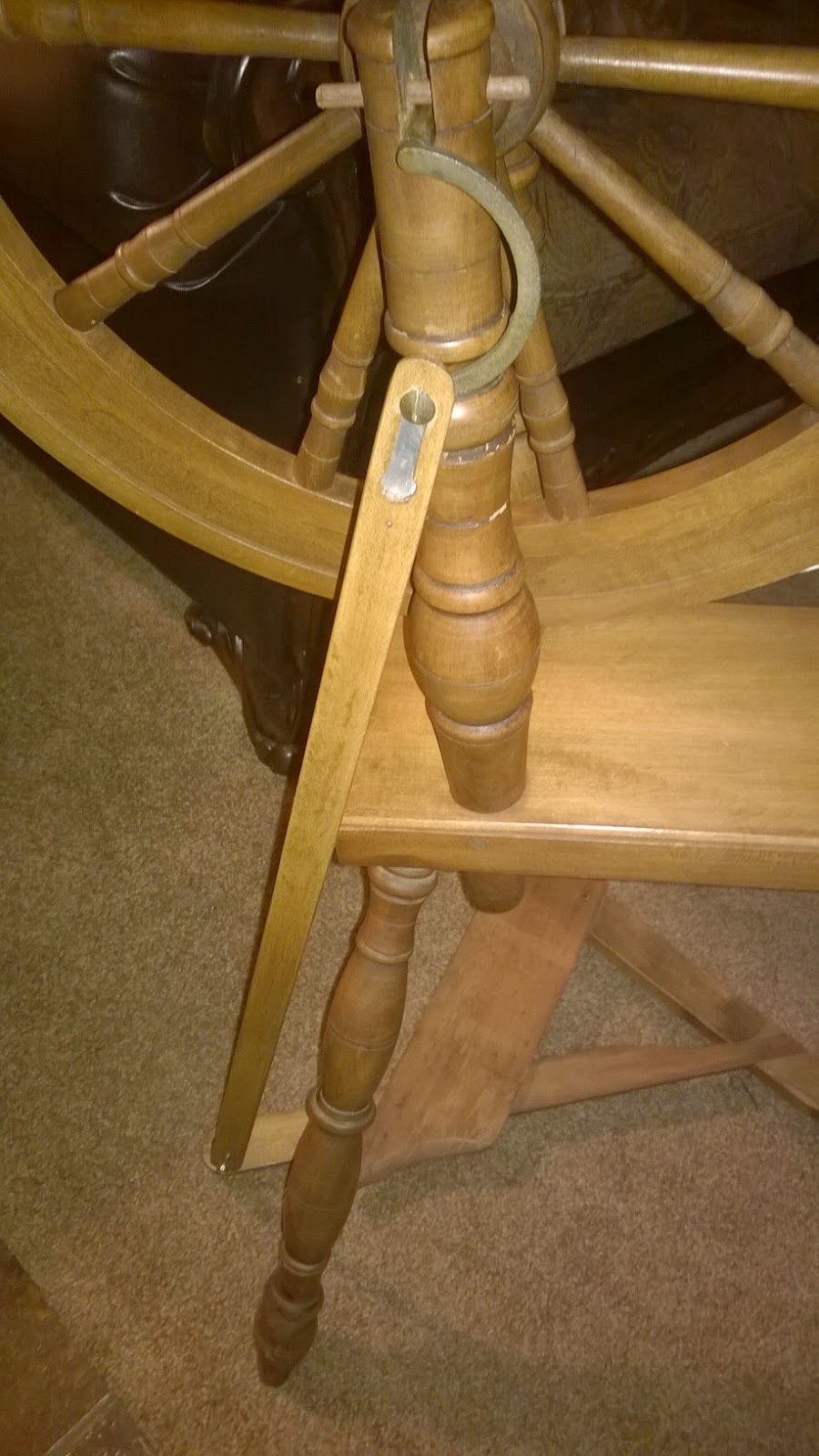 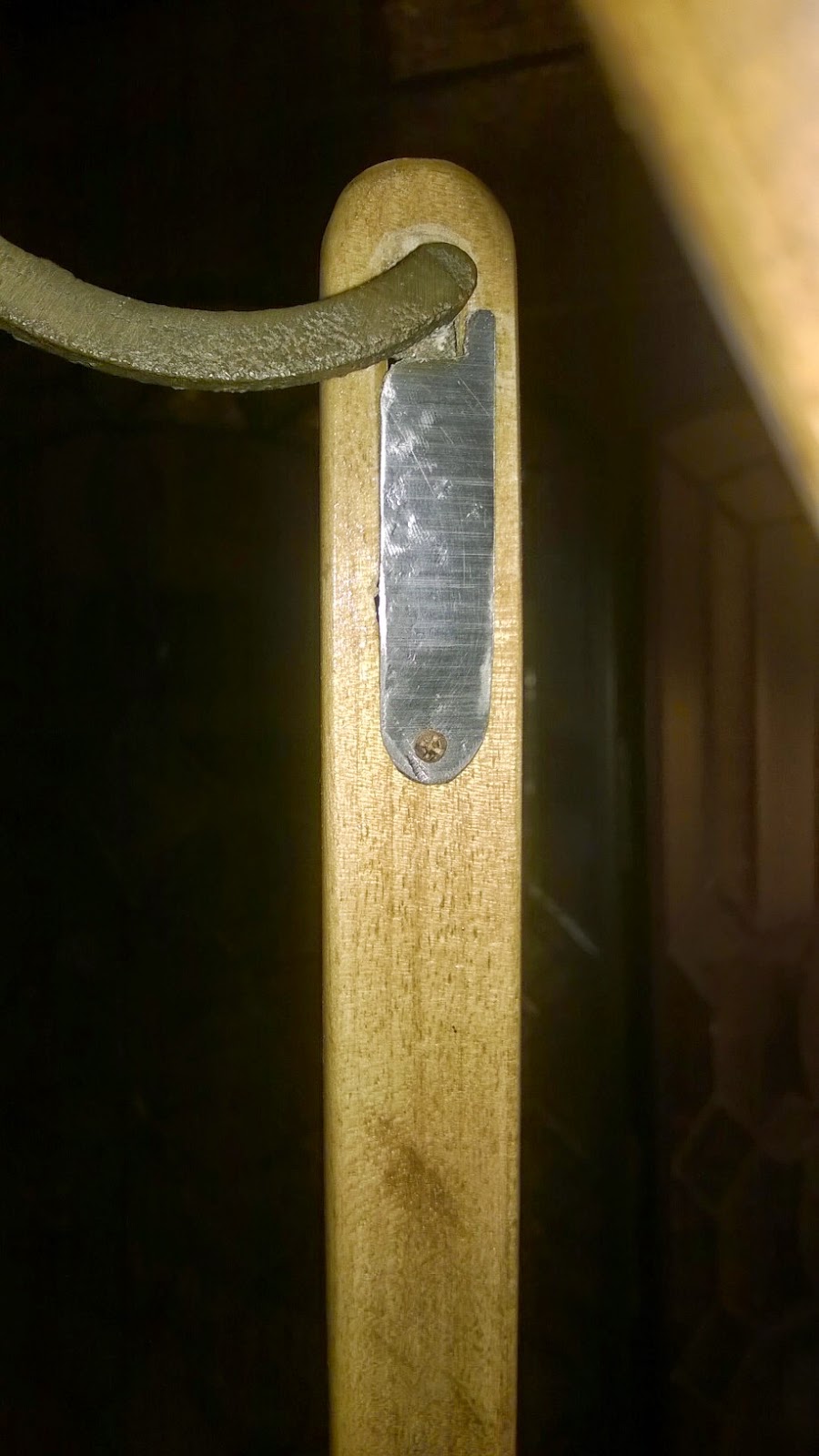 The two little pegs that hold the wheel shaft into place were missing.... so Chuck made new pegs for that too.  Two spots in the center sprocket of the wheel needed securing with tiny nails, which can be a risk to pound in, but he did a great job and made it all secure. 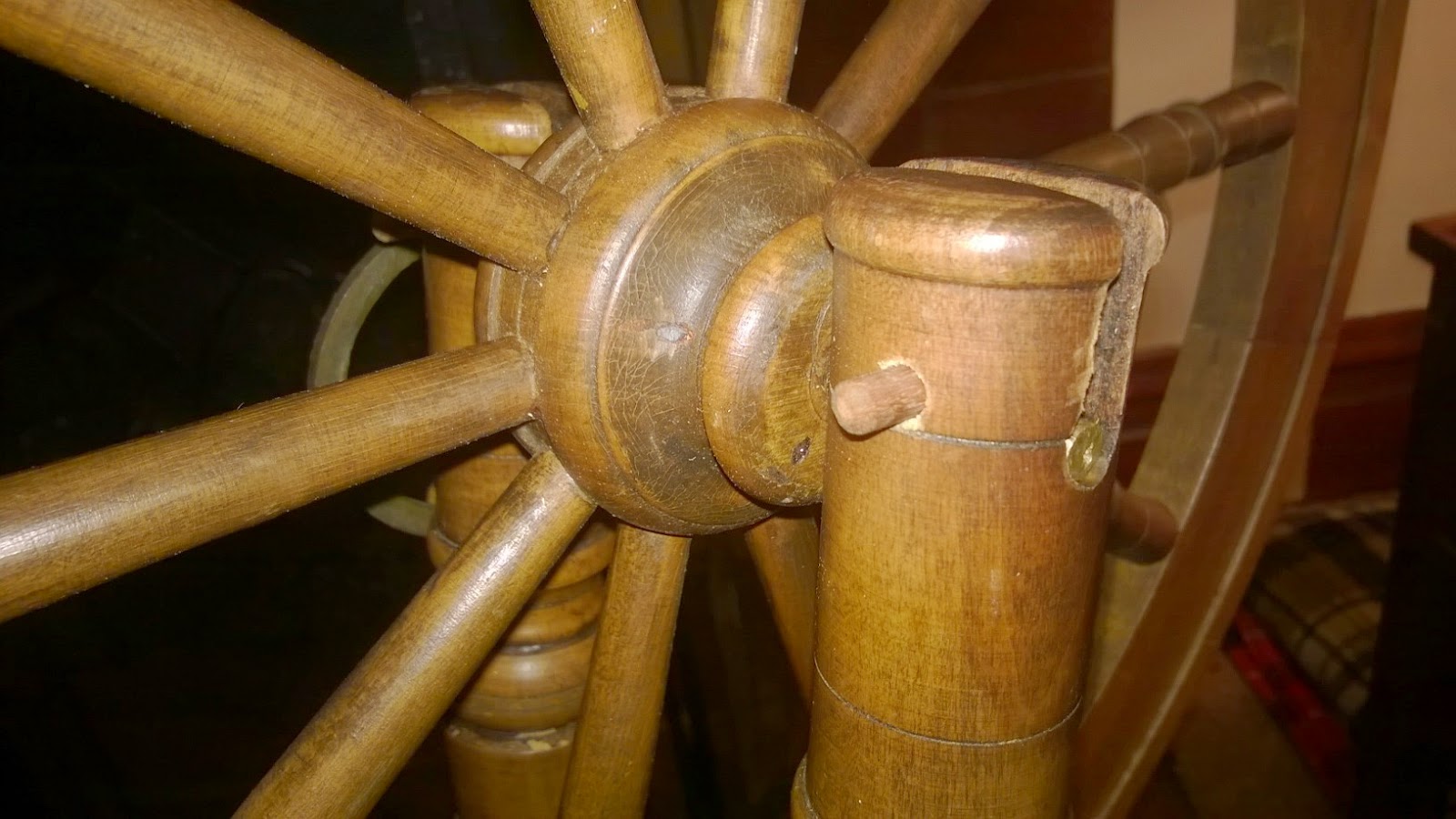 The leather "bearings" that hold the flyer assembly were created by gluing together layers of leather to reach a good stiff thickness that holds the flyer into the upright maidens. He added a new drive string (double drive configuration)   Everything spins fine and true! 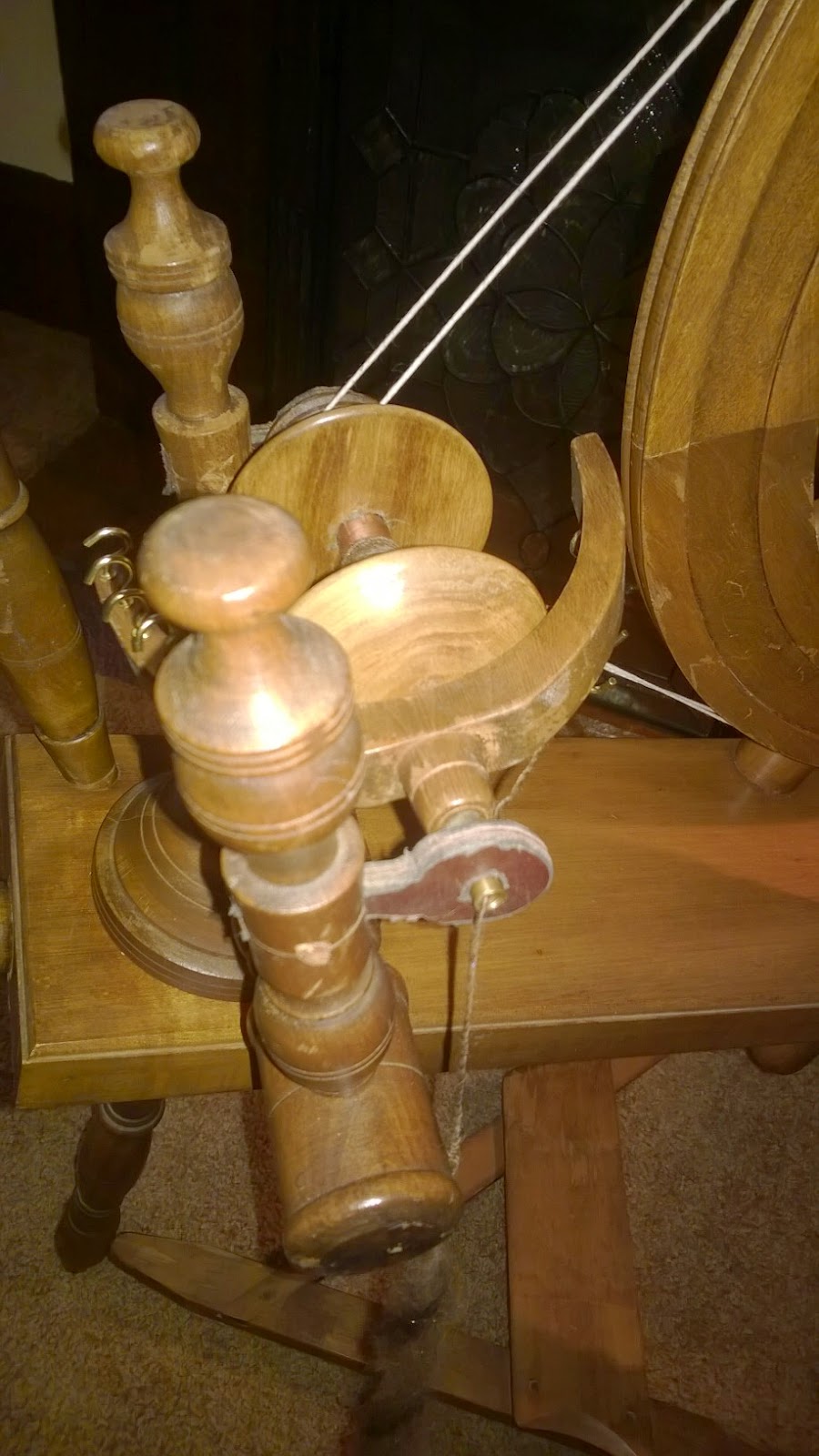 I must say, it works very, very well and spins smoothly.  I have some lovely alpaca roving with a bit of glitz blended in to spin up.   I bought this last fall at http://londondairyalpacas.com/ near Two Rivers and Manitowoc, WI.

The pleasant motion and use of this wheel is making it a real treat.  The wheel is larger than my other one, and seems to gobble up my drafting fibers quite well and quickly. I have it set just right to not "overtwist" the single ply.  It seems that I can keep up with it and treadle at a good speed. It spins "fast" and I did up this much on the bobbin in a short time. 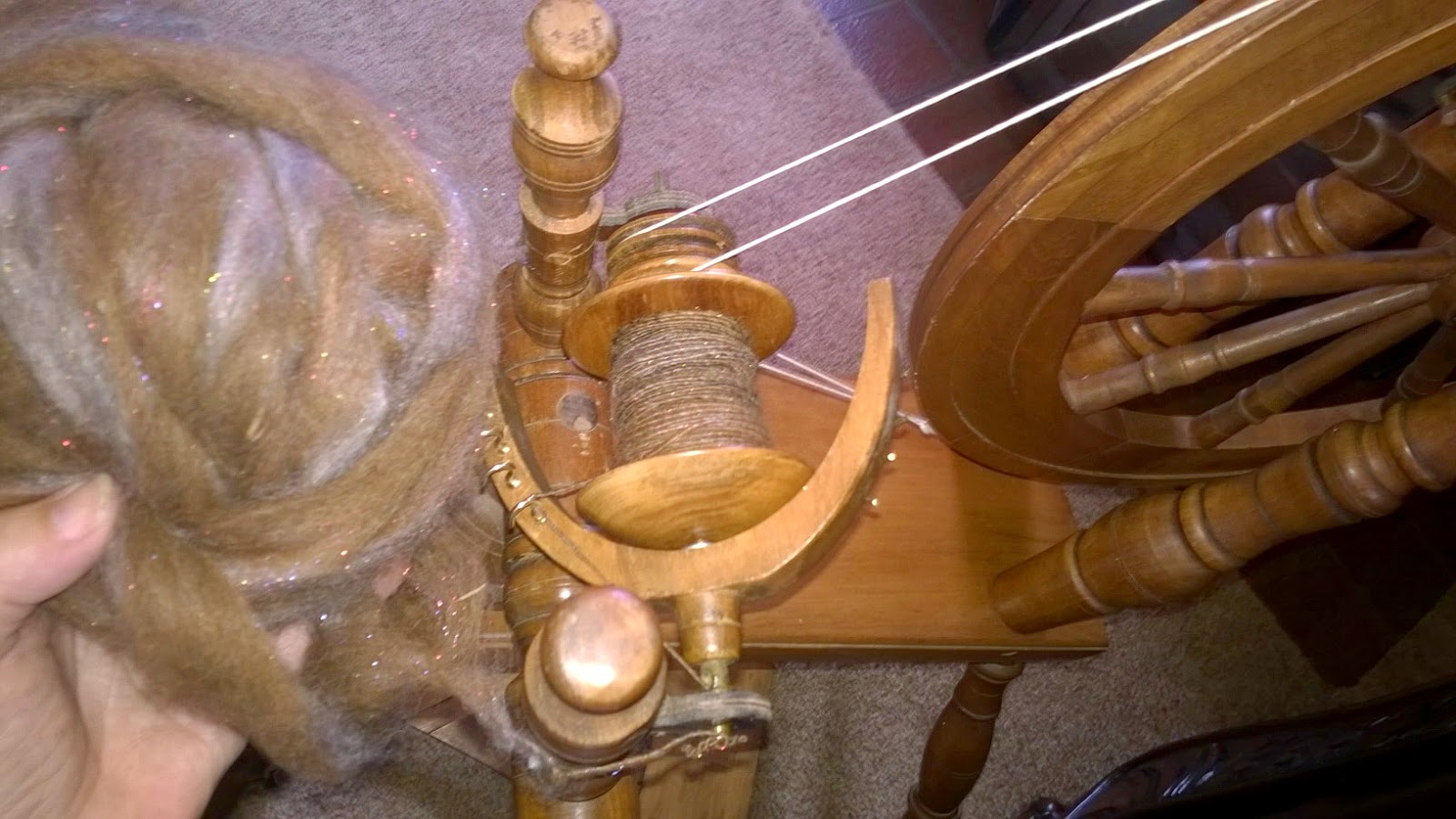 The price charged by Chuck Spann to restore this wheel
was very reasonable,
and I am going to really enjoy spinning on it.

Here is some interesting history on the maker of this wheel.
Notice the part that he once worked with
Howard Hughes on the Spruce Goose plane project!

Mr. Daneker, who was known as "Brod," was born and raised in Bel Air. After graduating from Bel Air High School, he earned his bachelor's degree in 1936 from Western Maryland College, now McDaniel College.

He was commander of a Civilian Conservation Corps camp on the Eastern Shore before enlisting in the Army, where he served in the infantry. He later transferred to the Army Air Corps and trained pilots. After World War II, he was discharged with the rank of major.

Mr. Daneker later traveled to California, where he worked with Howard Hughes on his Spruce Goose project -- the famous H-4 giant seaplane that flew for about a minute on its maiden and only flight in 1947.

He returned to Bel Air and went to work for the Million-Rutherford Co., a family-owned business that was established in 1946 and at one time was the nation's largest manufacturer of grandfather clocks.

The handmade cases were fashioned by craftsmen in the company's Fallston plant, while the imported works were fabricated by German clockmakers.

The company, which was also known for mantle clocks and spinning wheels, later became the Daneker Clock Co. It closed in 1973.

Mr. Daneker, who enjoyed flying and owned several private planes, continued to fly until he was well into his 70s.

A resident of Towson, he also spent part of the year at his second home in Boynton Beach, Fla.

Plans for a memorial service were incomplete yesterday.

Mr. Daneker is survived by his wife of 66 years, the former Mary Perrine; a son, Thomas E. Daneker of Towson; a brother, Million E. Daneker of Bel Air; and several nieces and nephews.

Thank you, Mr. Daneker for making this lovely wheel!

.
Posted by KarenInTheWoods at 9:05 AM