Oh, be still my heart!   I introduced little Chelsea, four years old, to the art of quilting!  (or "needle-ing" as she calls it).   After such a great time, I can not wait to show little Allegra in a couple weeks when it's her turn!  She is also four years old.


Here we are in my loom room, bellied up to my 101 year old Singer Treadle Machine...
Her legs are now long enough to reach down and help me treadle the machine. 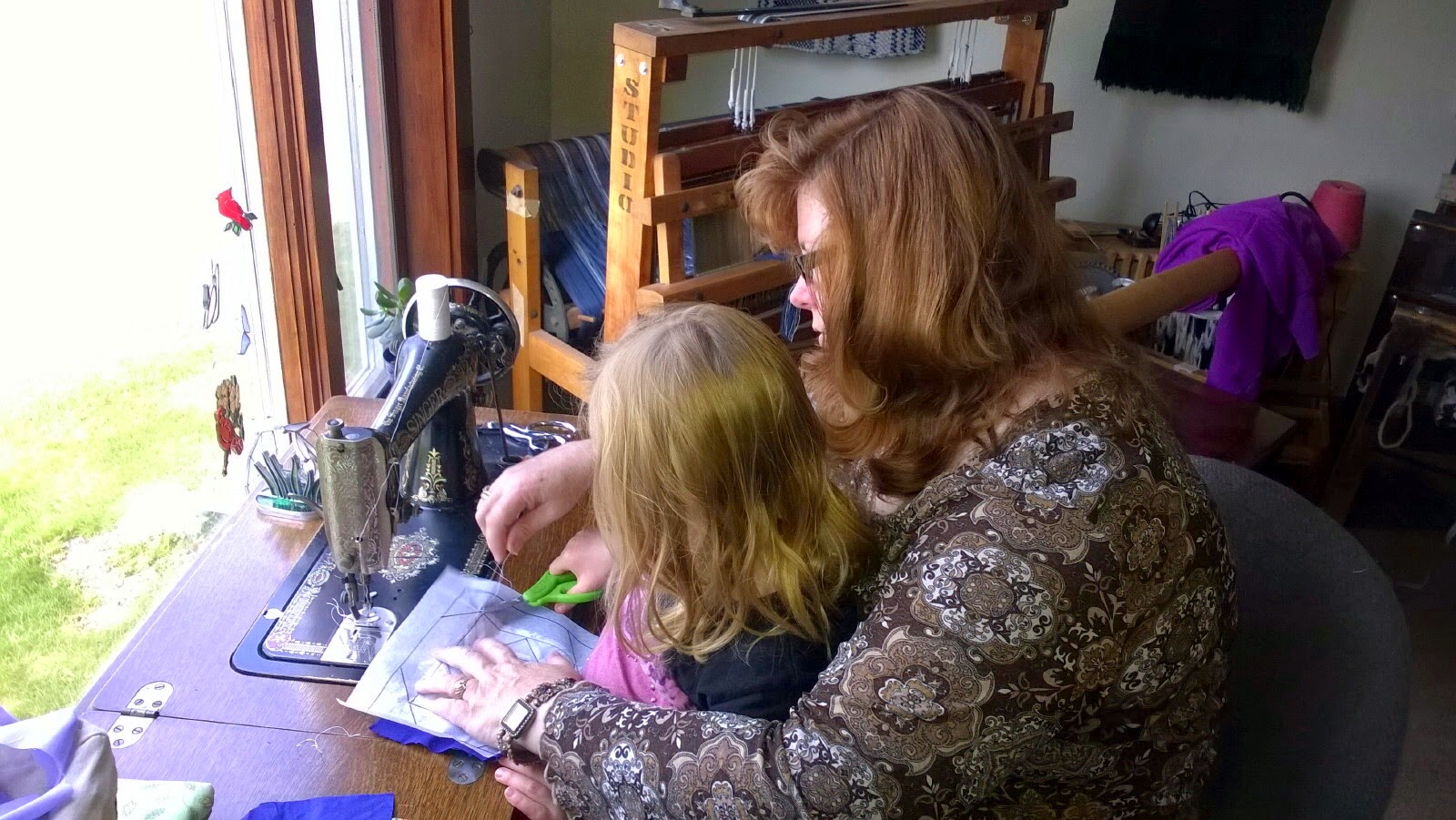 Steve ran around with the camera snapping pics for me, so we could concentrate on what we were doing. I think he captured the moment quite well for us!

We started with choosing the fabric colors and cutting out the shapes.  We were doing an easy quilt block in paper piecing mode, which doesn't need exact cutting or seam matching.  She figured that part out pretty quick.  Then it lead to her handing me the stick pins one at a time.  She would decide which head color of which pin went in next.  Soon we were ready to sew, and she was careful to not get her fingers near the pressure foot.

Steve went outside and took a pic of us from outside
through the big picture window that we were sitting in front of. 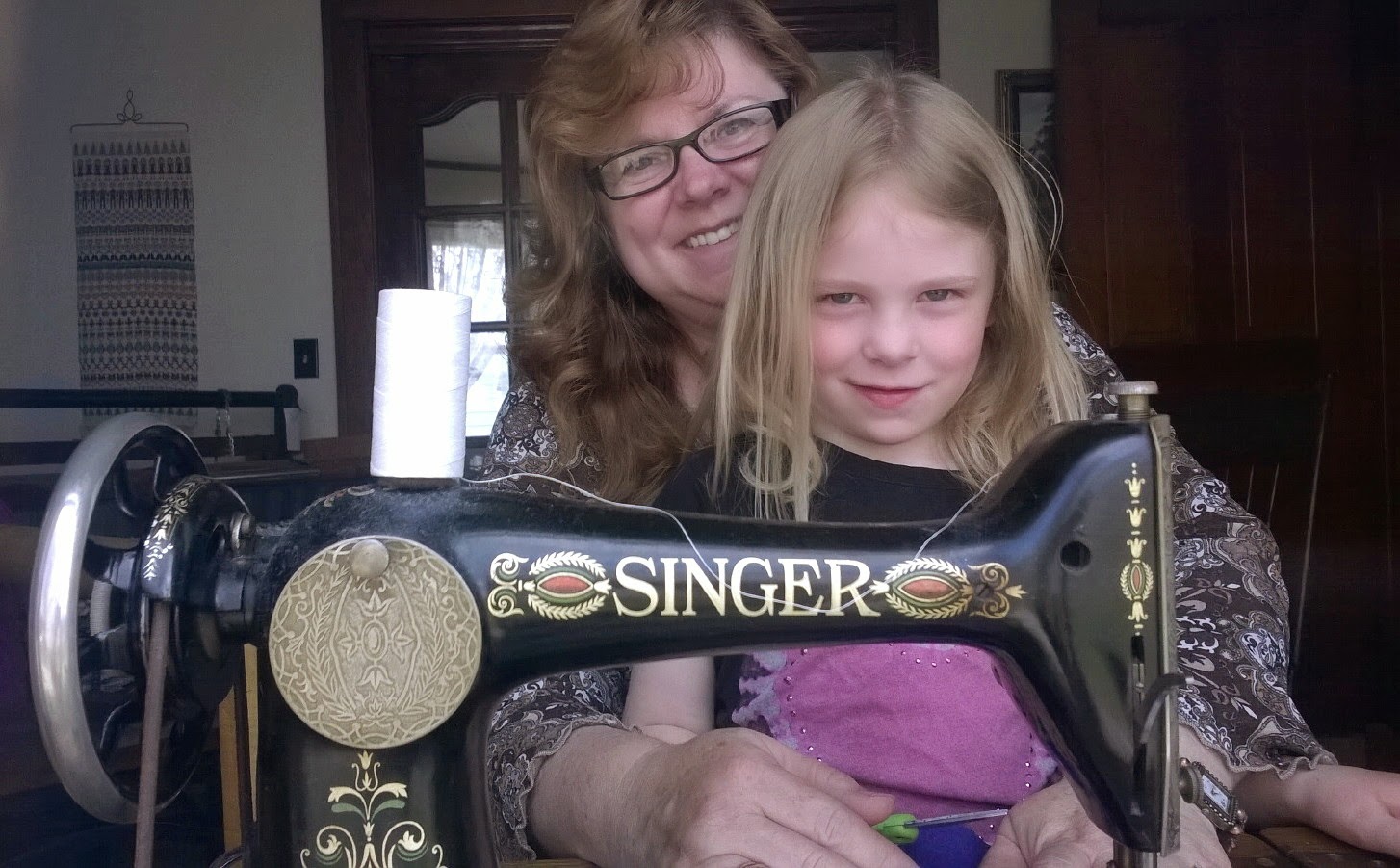 She was sooo careful and had such a long attention span! We were doing this for about an hour. As each pin came into close proximity, we would stop treadling and she would pull the pin out and place it carefully back on the magnet. 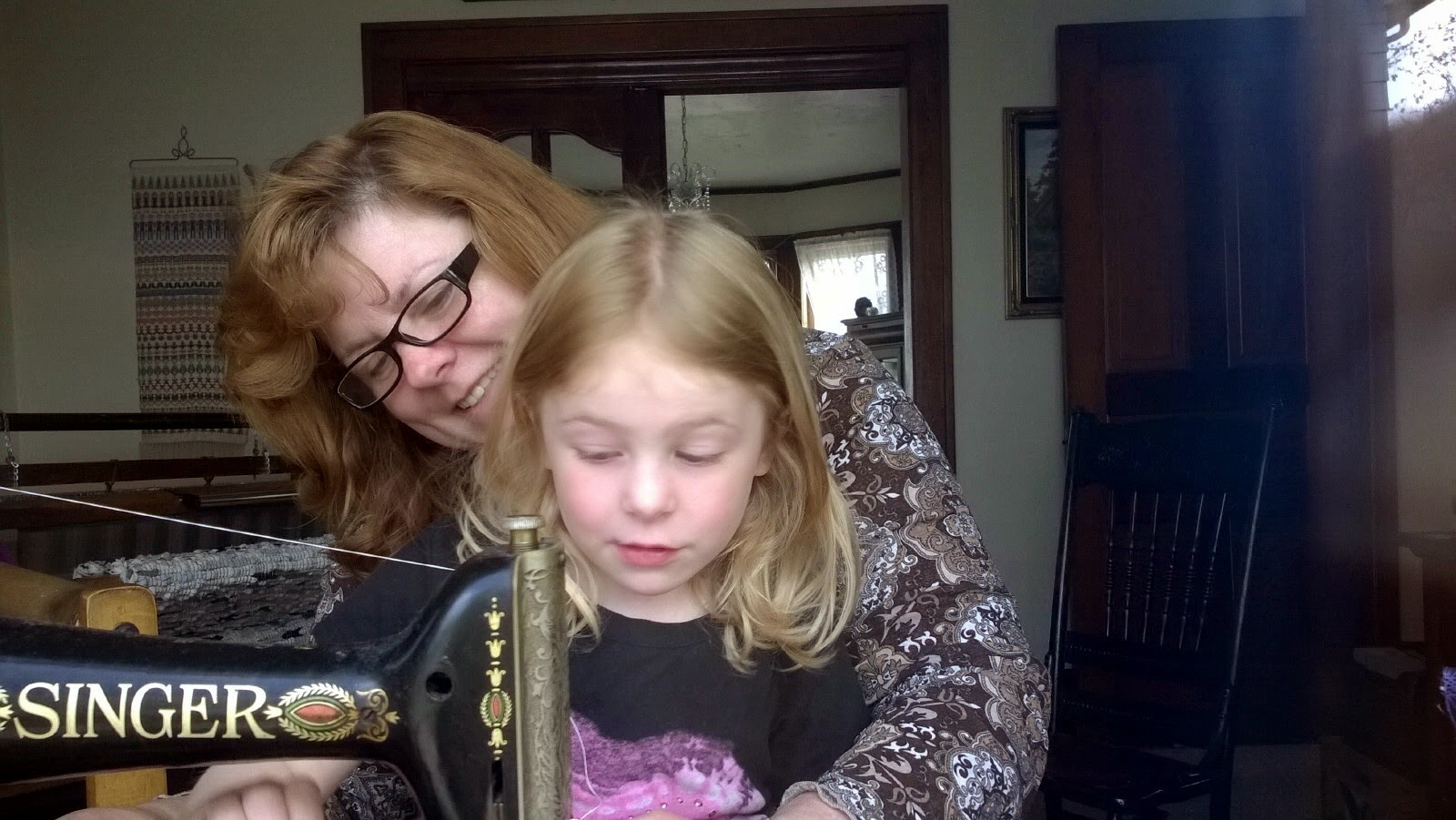 Once each seam was done being sewn, she used her blunt safety scissors to cut the threads on both the top and bottom surfaces of the square.  Very detailed and she didn't make a single mistake. 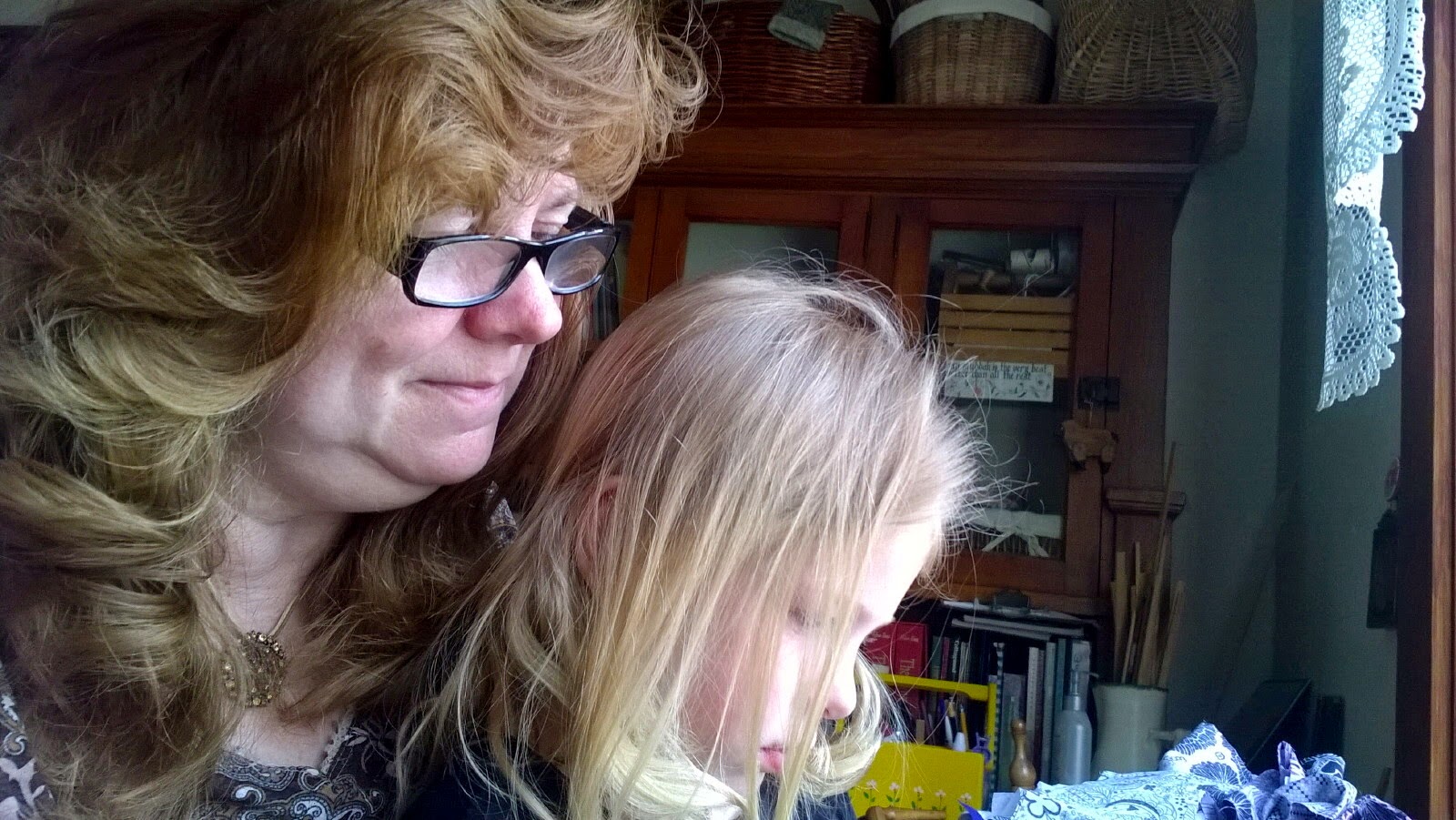 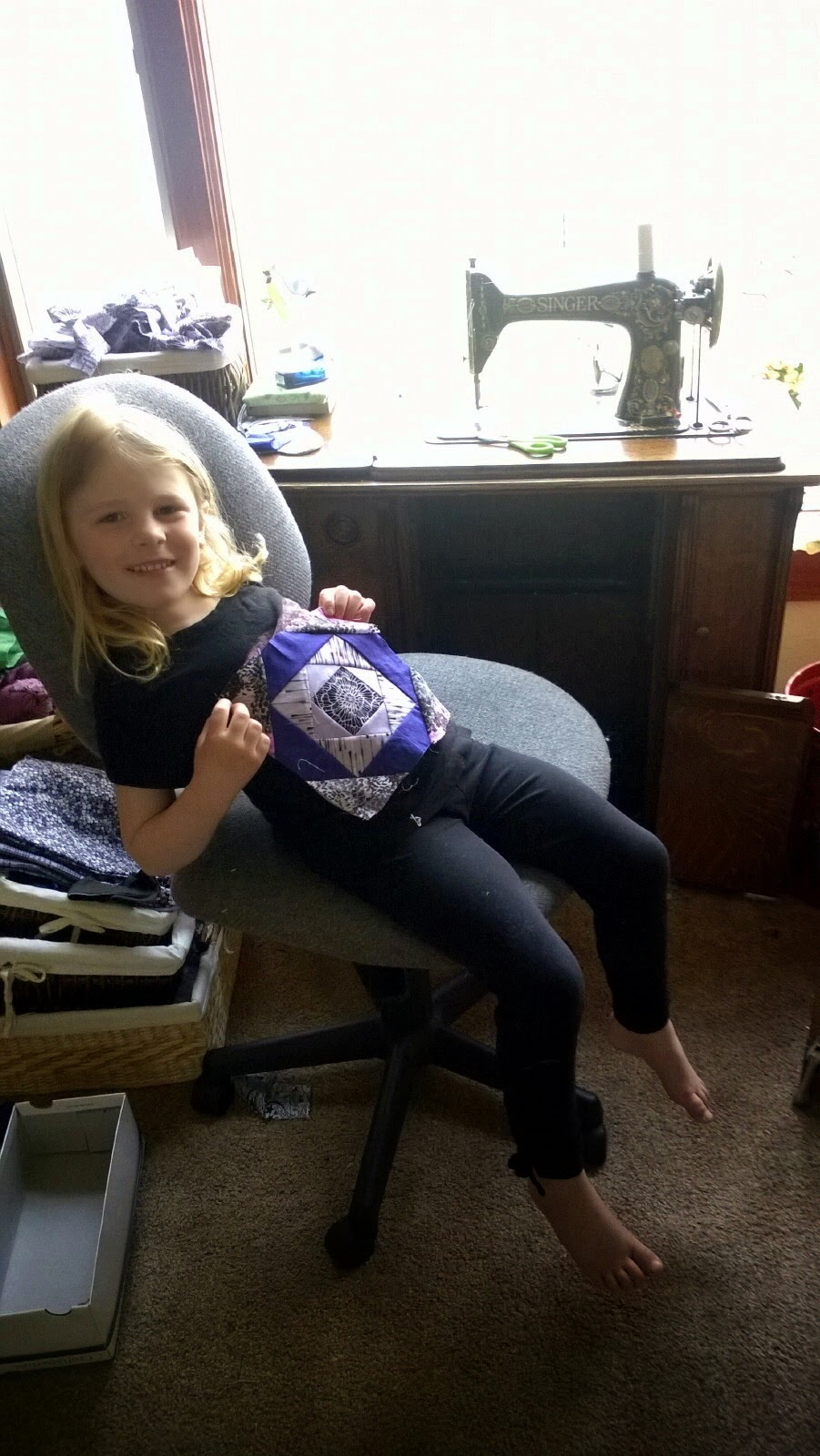 We finished a complete 10" quilt block and I suggested we take a break.

Within 2 minutes, she was asking to go back and start another block!
"Let's do more Needle-ing, Grandma!"

While we girls were needle-ing, Granfaddah was keeping little Clayton occupied.  They played with puzzles and books and trucks... plus Clayton helped load the dishwasher.  He is a little worker and follows his Granfaddah around like a little puppy!  We had a nice visit with both them as they came to stay for the whole weekend.  We were lucky to have lots of fresh air and sunshine as the weather cooperated for some playtime in the park nearby. 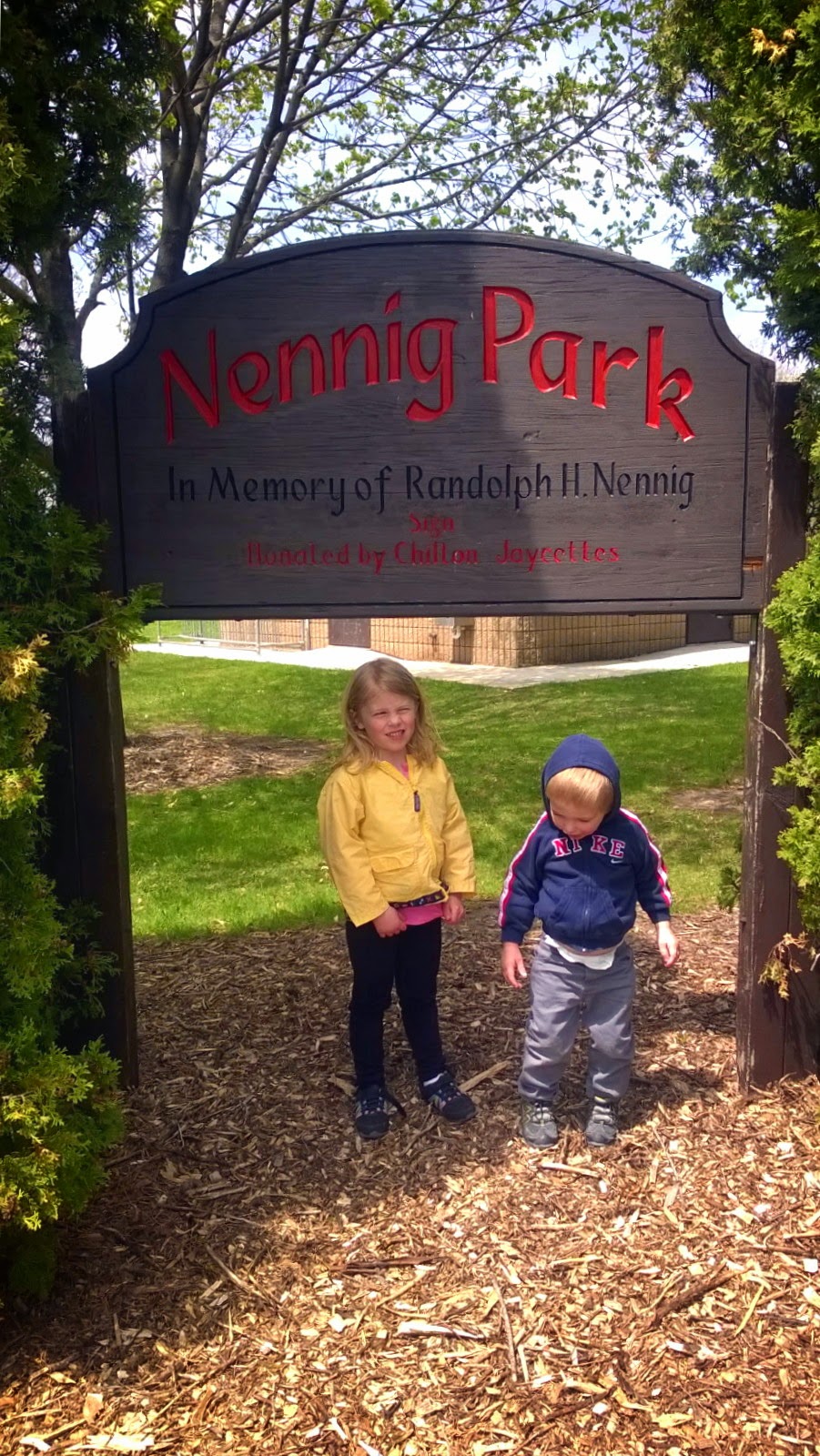 This park won some kind of award for having the nicest maintained vintage playground equipment for the kids.  No plastic and elaborate modern climbing structures of treated wood.  This is just good old fashioned fun stuff! 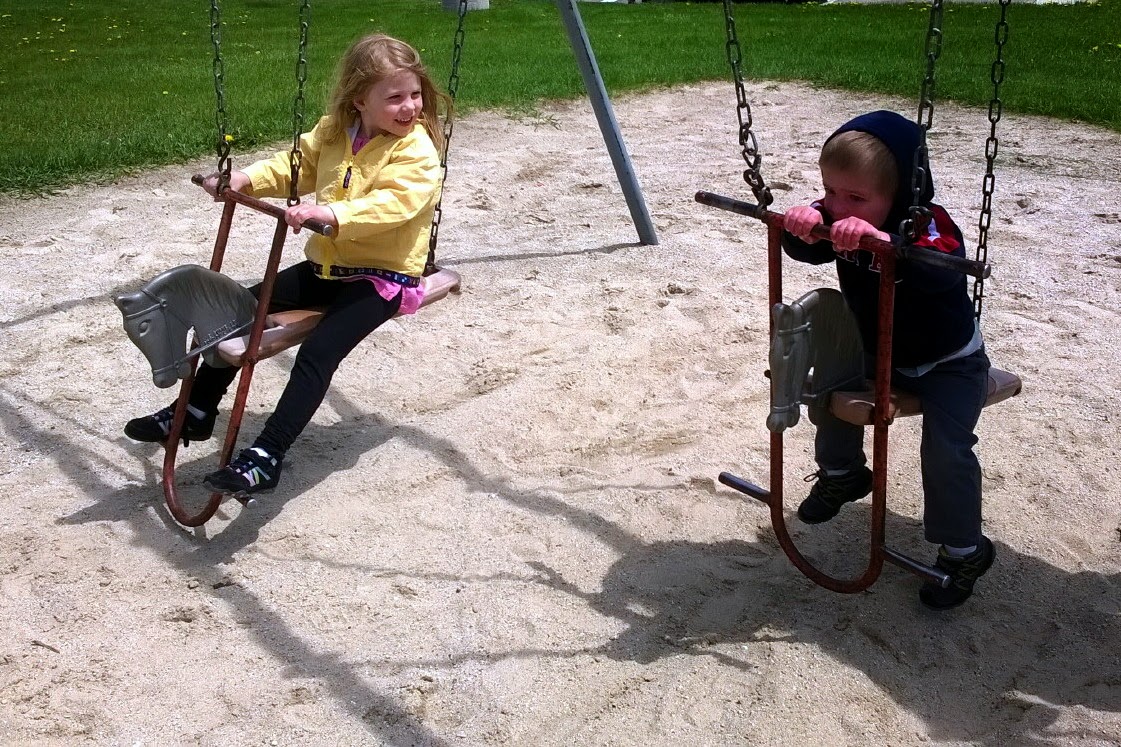 This slide was really fun,
and Granfaddah was right there in case someone took a tumble 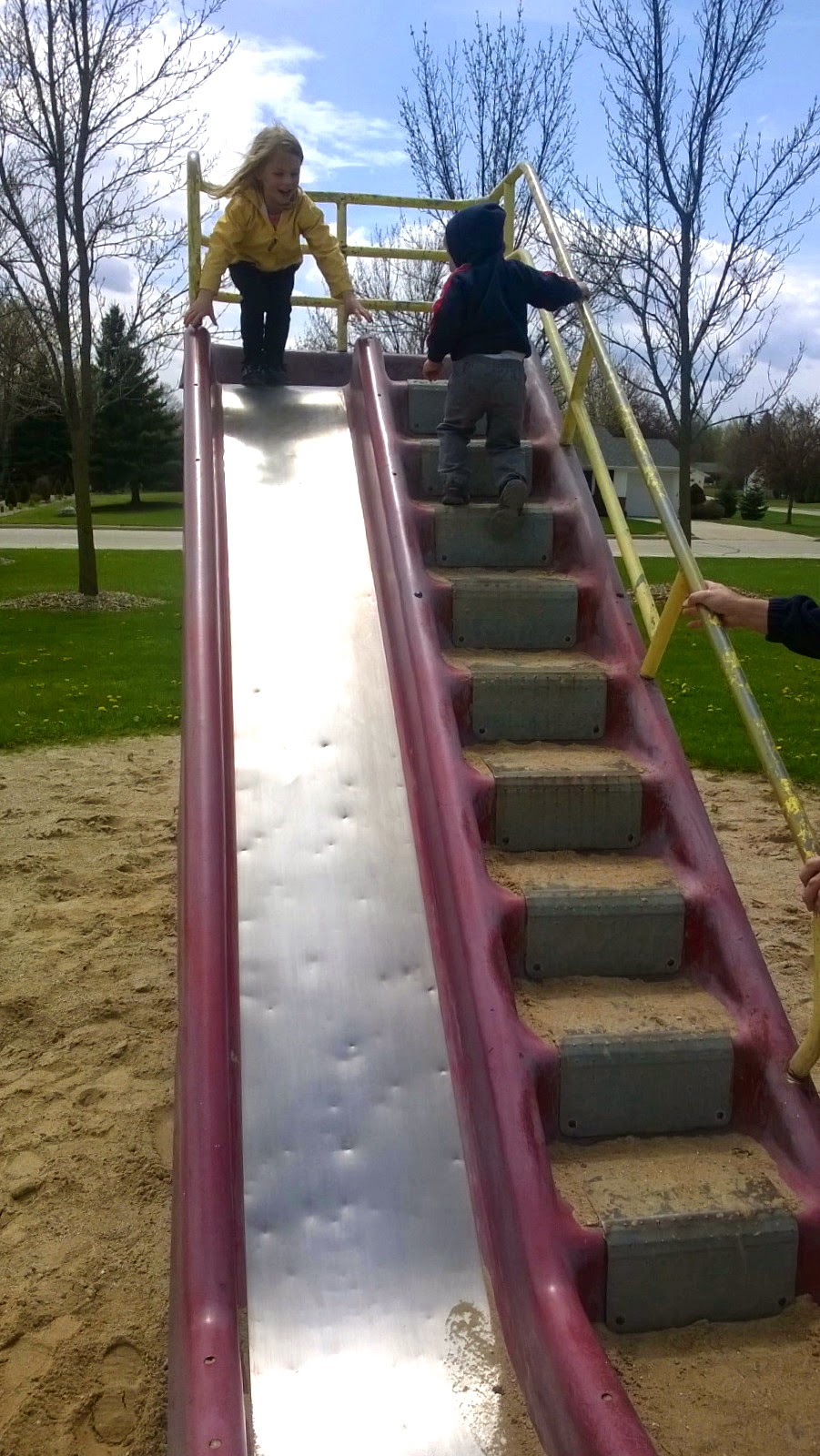 It was up and down and round and round on this one...
But we didn't let them on the arched climbing bars in front because I have a real fear of them ...
our daughter Heather once shattered her elbow falling from one of those in 1st grade. 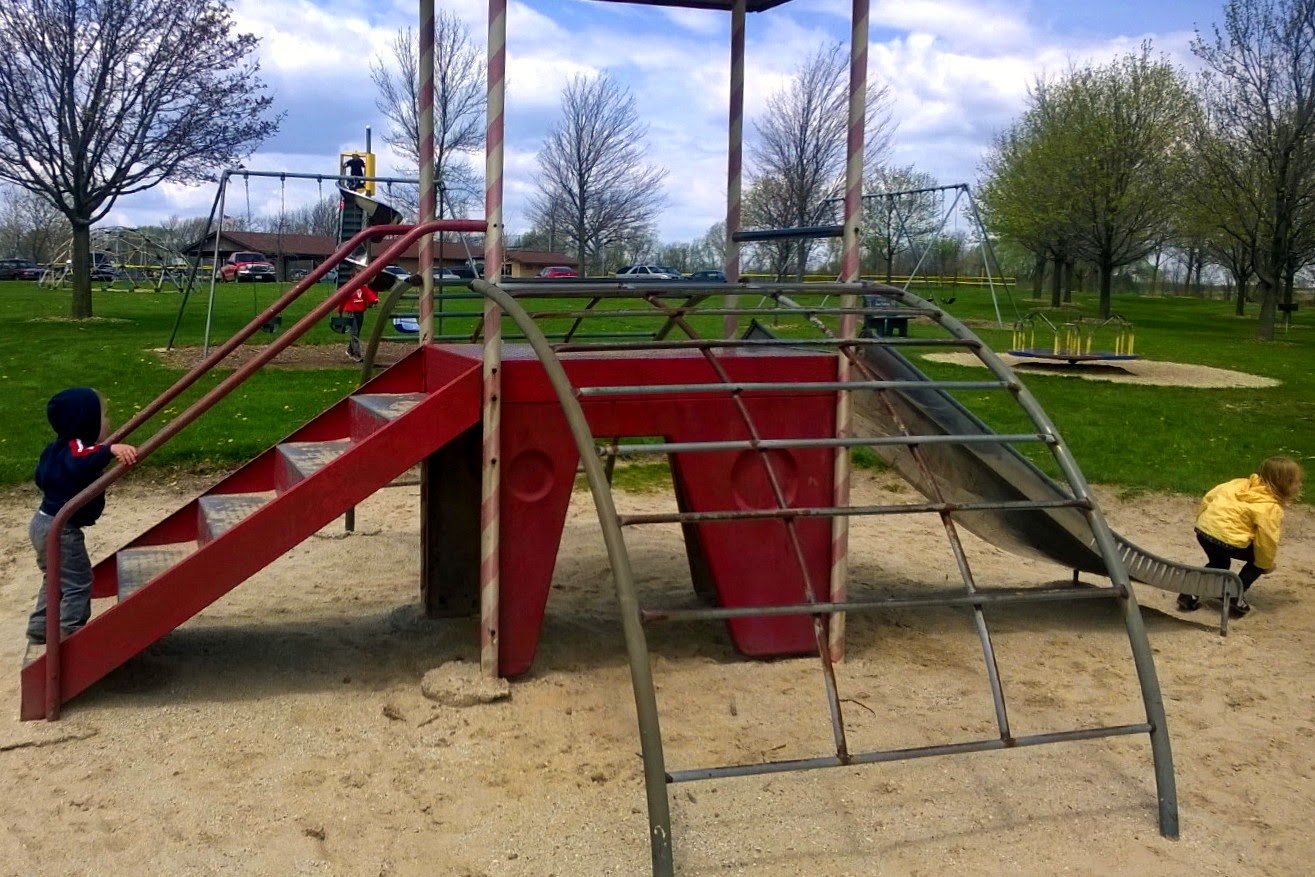 We took the time for a little snack on the picnic tables in the park.
Some raisins, packs of fruit snacks and strawberries! 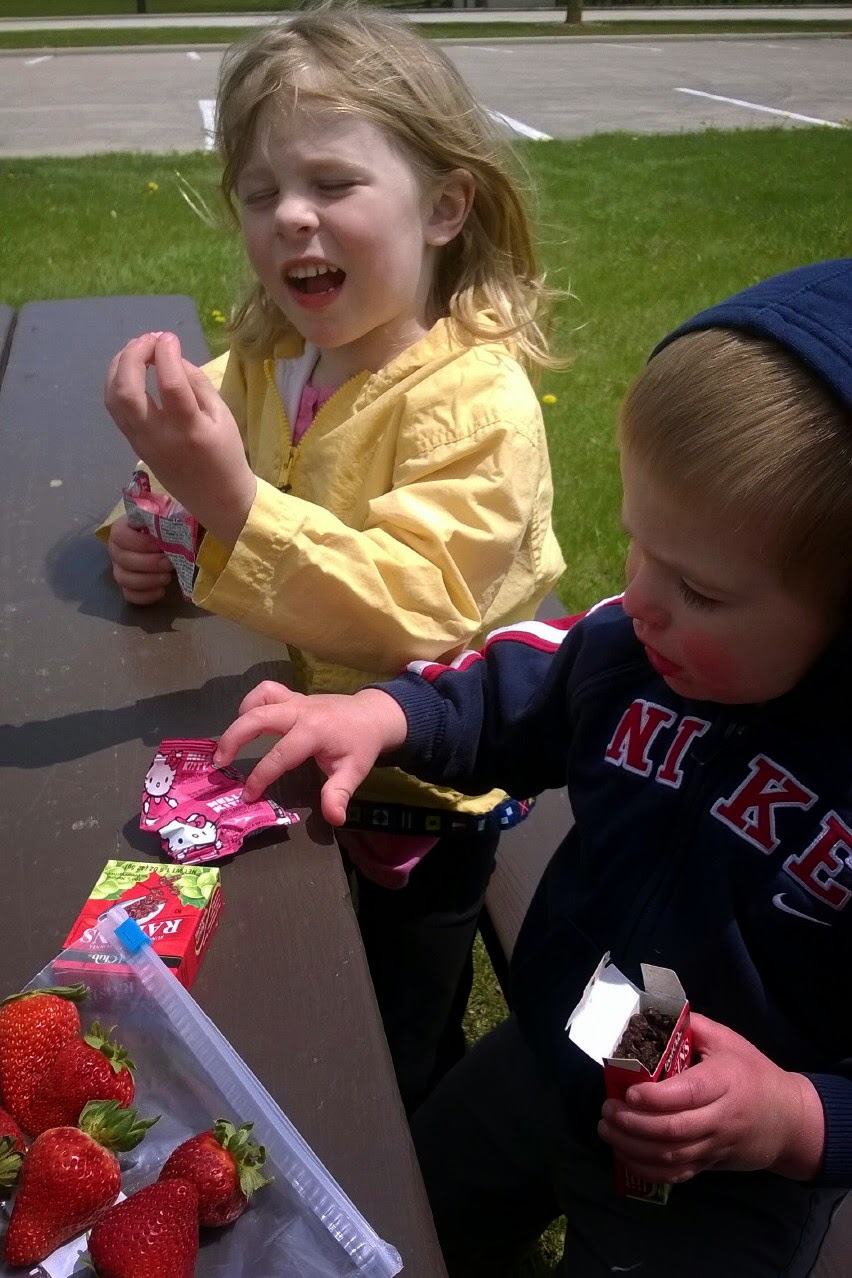 The highlight for Clayton was our walk to and from the park.  We took the stroller but only had him ride in it while on the busy street.  Once we got to the side streets, he was able to walk on the sidewalk while holding our hands.  Being only 2, he is close to the ground and notices things on HIS level.  He was fascinated by the water curb-stop valves along the sidewalks. the storm sewer grates in the gutters, and a huge manhole cover on one sidewalk near the park.  We stopped again and again so he could explore them and see his interest in something that was not "dirt" on the ground. 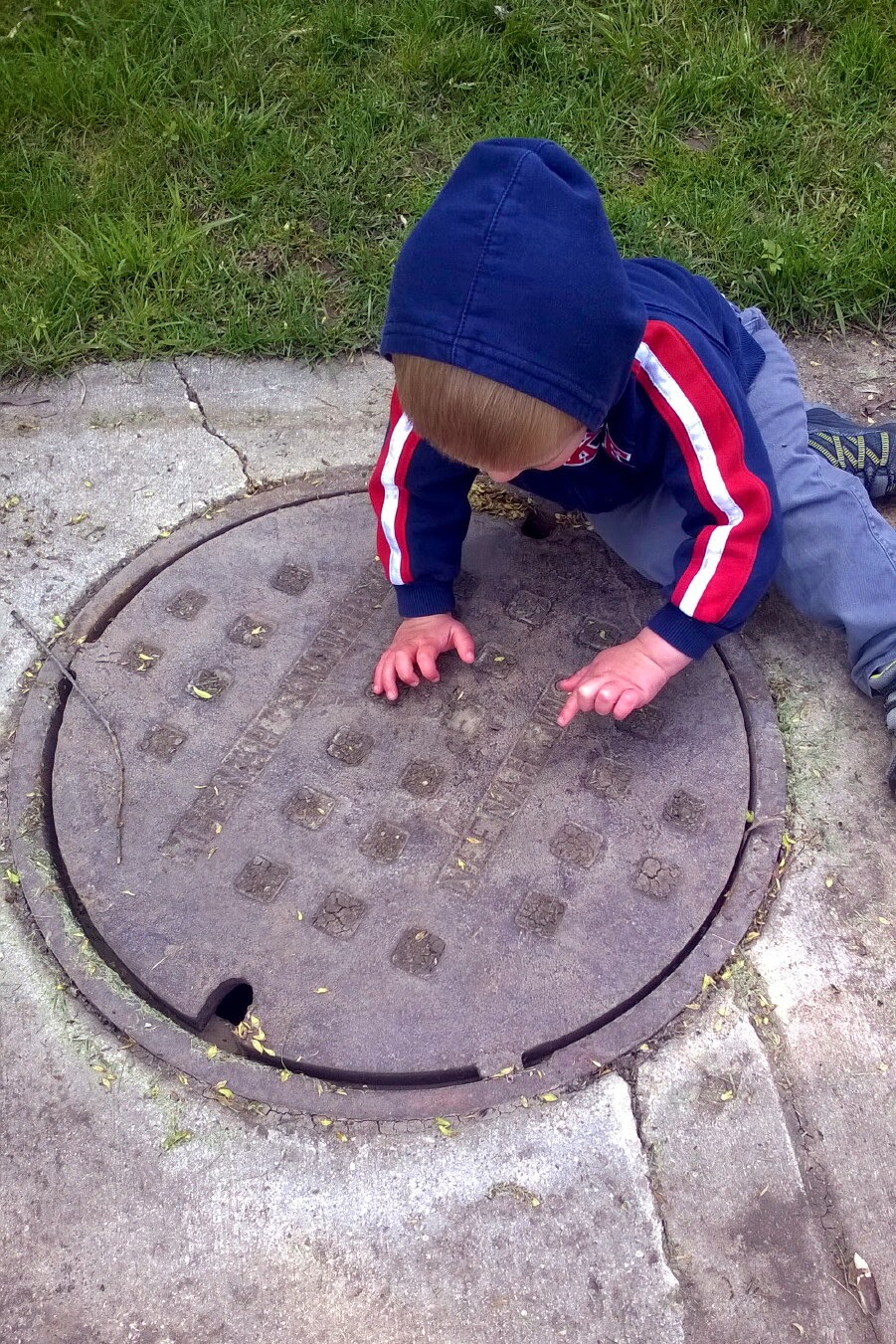 The dogs both enjoy having any and all of our grandtots visit.  They even take naps with the kids on the air mattress in the bedroom set aside specially for our grandtots.  Here is Clayton having a "Three Dog Night" naptime ...  well, it's really two dogs and one stuffed toy sheltie! Can you tell which one is which? LOL 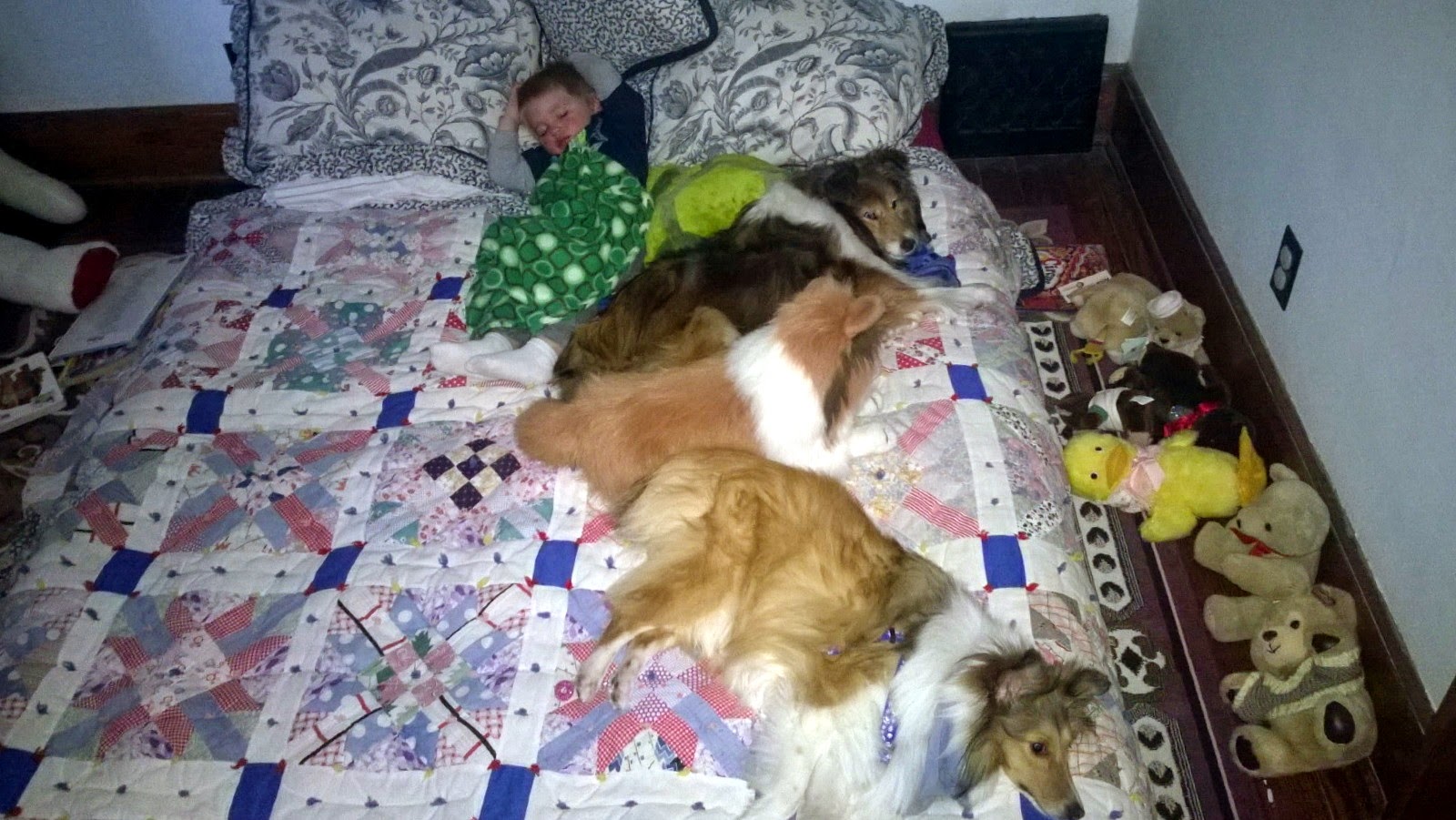 I love having some cuddle time with each of the grandtots.
Here Clayton and I are reading his favorite story: "The Monster at the End of This Book"
Look at his little toes sticking out from under his stuffed turtle.....

While the kids were here, we got in a lot of front porch setting time...
It's easier to clean up the spills out there, and the dogs do a good job of helping! 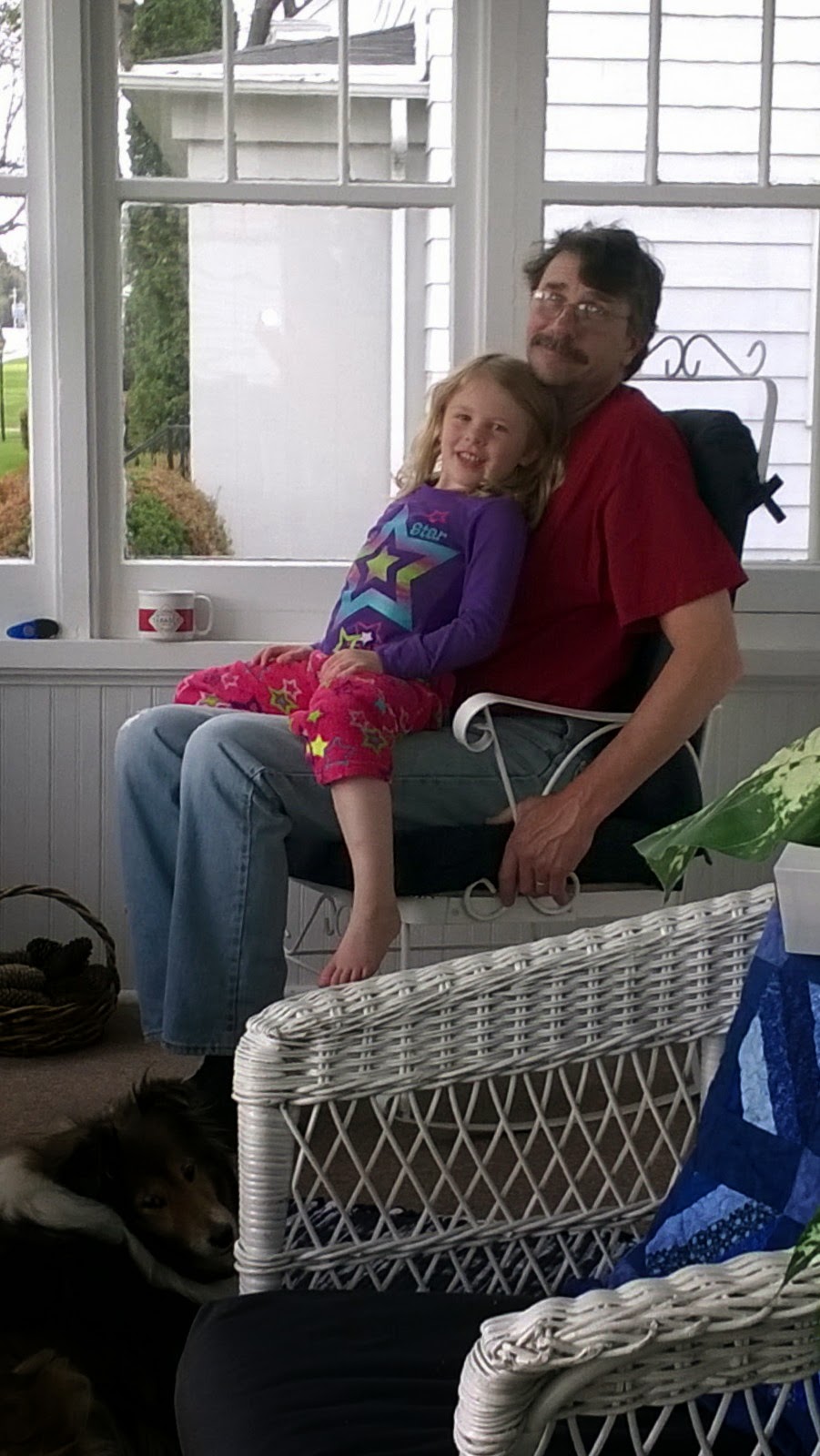 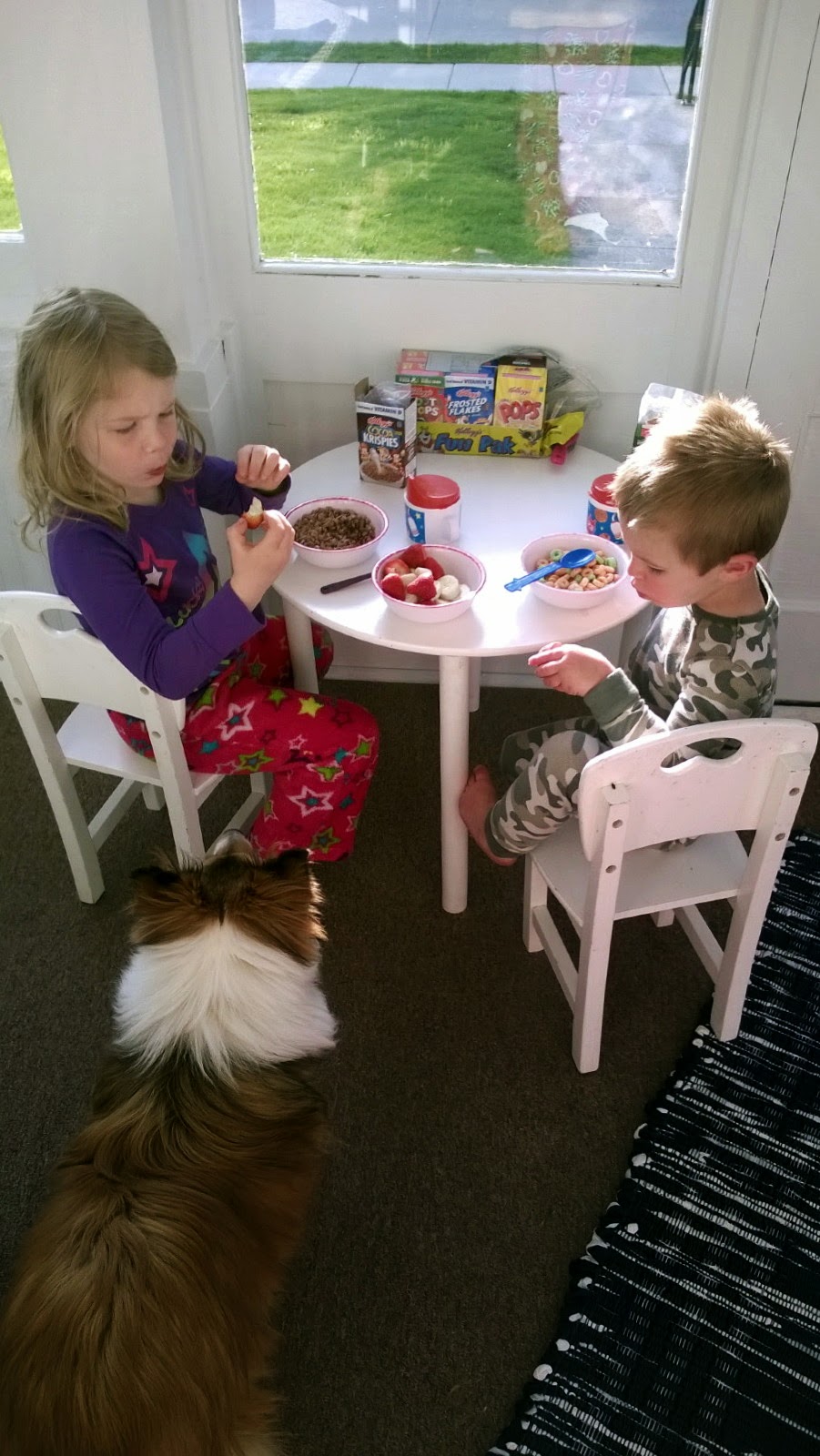 The dogs were soooo sad to see the kids leave.  They moped around most of the evening and kept looking for "those childrens" to play with.  Wandering around the house, looking and whining and wanting to find out where they were hiding?

Finney was missing in action from about 9 p.m. and I thought he went up with Steve to our bedroom.  When I got up there, after finishing a short blog. about 10 p.m. I could not find little Finney.  He wasn't in our bedroom in his usual spot.  Hmmmmmm

I went to the grandtot bedroom.  THERE was Finney, laying on the little air mattress bed and wagging his tail hopefully.. .wondering if "those childrens" were coming back.  Awwwwwwww-------

Posted by KarenInTheWoods at 10:07 AM