Steve and I went out for breakfast Saturday morning over to Hilde's Bakery and Deli which is two blocks away.  It was a nice little walk and we enjoyed eggs, ham and cheese on croissants.  Hilde does the best food and baked goods in her little shop on Main Street.... what a Treat!

Afterwards we stopped at a couple rummage sales.  Last year, I had stopped by this one particular guy and bought three wonderful treasures.... an old crockery bowl, a enameled white coffee pot and a framed print of the collie and little girl on a time out called "A Special Pleader"  that hangs in the grandtots's bedroom. All very reasonable prices.  This guy has some wonderful stuff and he has his rummage sale a number of weekends each year.

While there, I happened to see this lamp...  and looked at it several times.  Steve was ready to leave, but I just couldn't stop thinking about that lamp and how unusual it was.  There were several old oil and kerosene lamps, but this one struck a chord with me.   I knew that if I didn't buy it, I would probably regret it and look to find another somewhere else someday.  Finally I asked the price because the tag that was hanging on it hadn't been written on.  (all of his other things were clearly marked)  I held my breath.... and he said "Oh... Twenty bucks?"    SOLD!  I didn't even dicker on it, I just wanted it!


It's called The Juno Lamp by Edward Miller 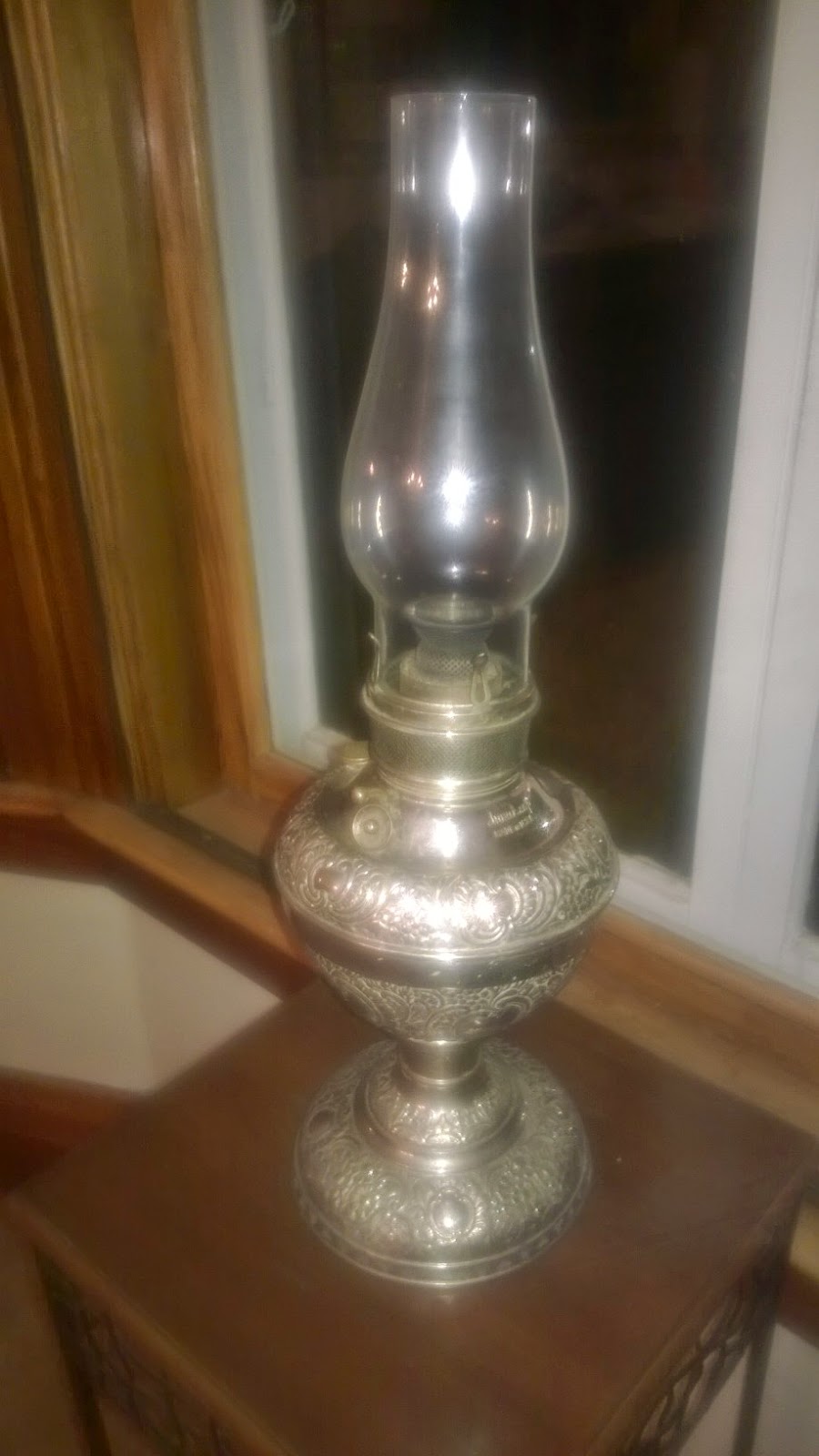 It's all nickle plated in pretty nice shape... and still has the wick inside. The center "draught" device was a little stuck, but Steve gently and carefully worked it loose. That is how the air gets into the lamp, through the screen grid around the neck and draws up from the holes around the base of the lamp near the table.  I just had to have it.  It will look SO nice in the diningroom! 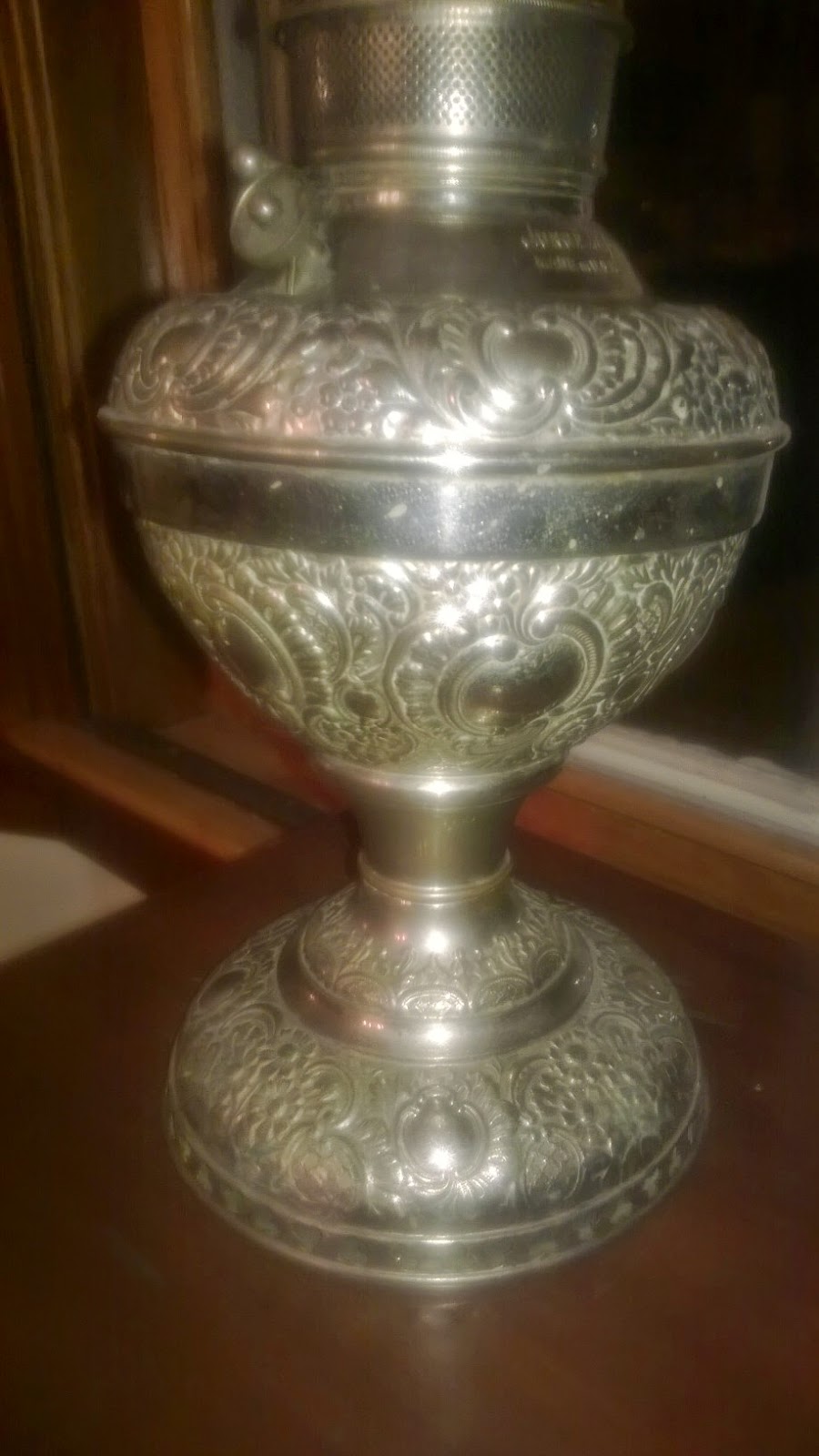 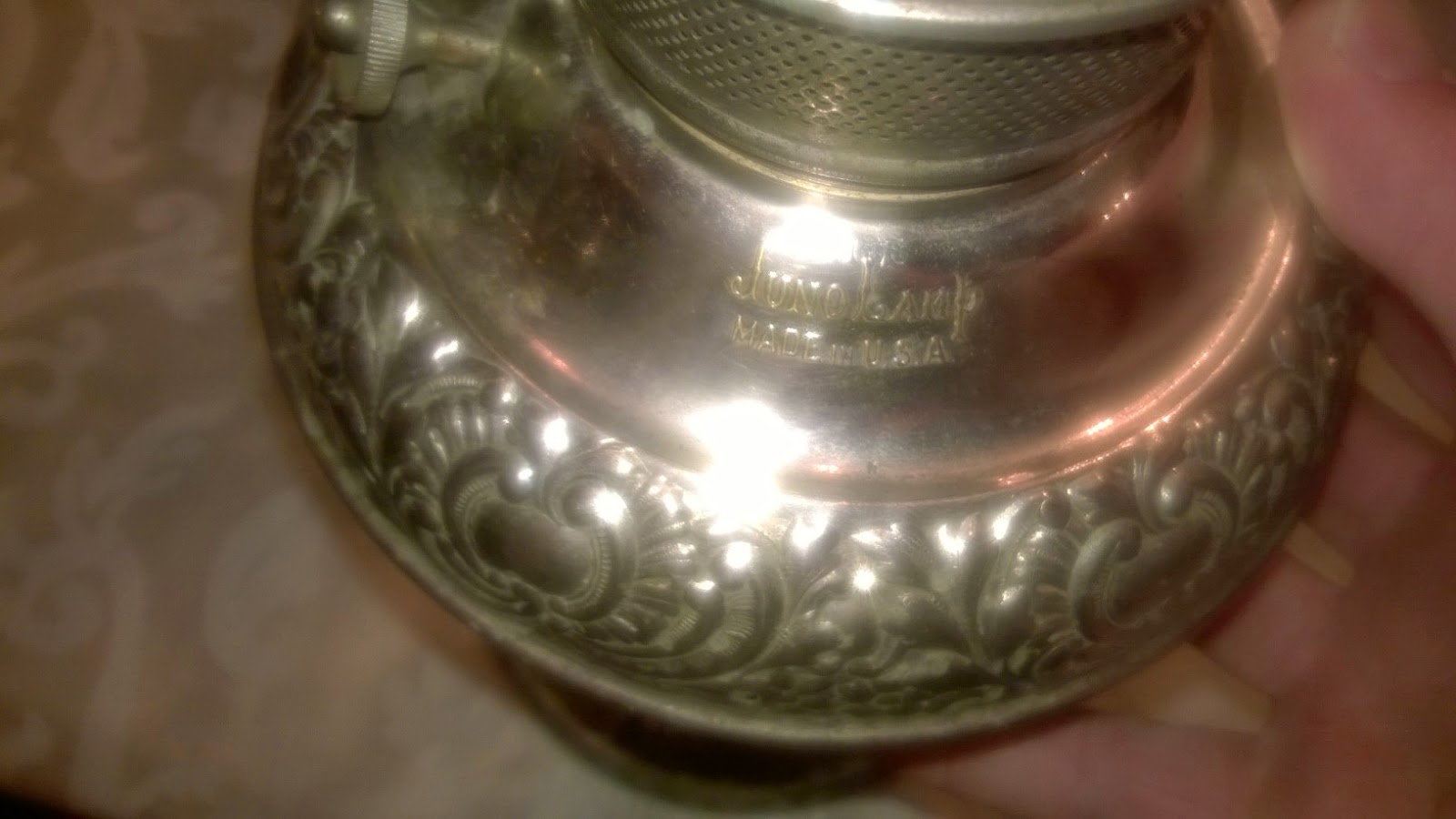 I like to think of the first woman, or perhaps a newlywed couple,  who bought this lamp as brand new so long ago.  Was it a prized possession in their home?  Did they have to scrimp to buy the fancier embossed decorative lamp as opposed to the plainer looking average lamps this company also offered? Did they treat it with care and pride?  Or was just another lamp in a house that was full of lamps?   Of course, kerosene oil lamps were common before houses were electrified and you needed lamps in most every room of your house.

We did a little research on it last night... and wrote to an expert collector who happens to live in Australia, to find out more about the lamp.  Some photos show lamps like this with a tall skinny shade like the one on it now.  But some other photos of the Juno Lamp show an extra piece with extending arms and larger dome shade that sets around the tall skinny one. I would like to find out which way it was when originally sold. 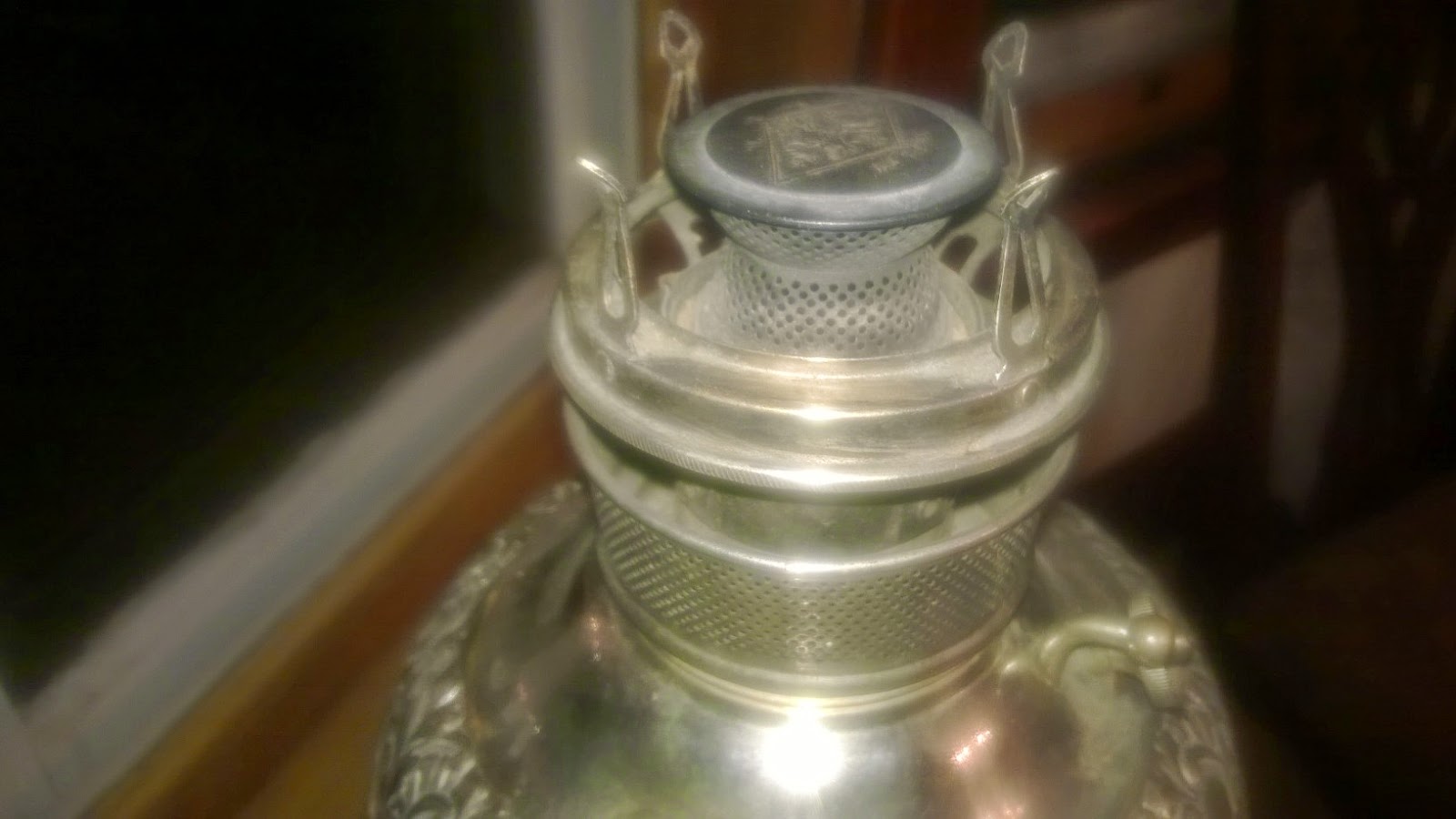 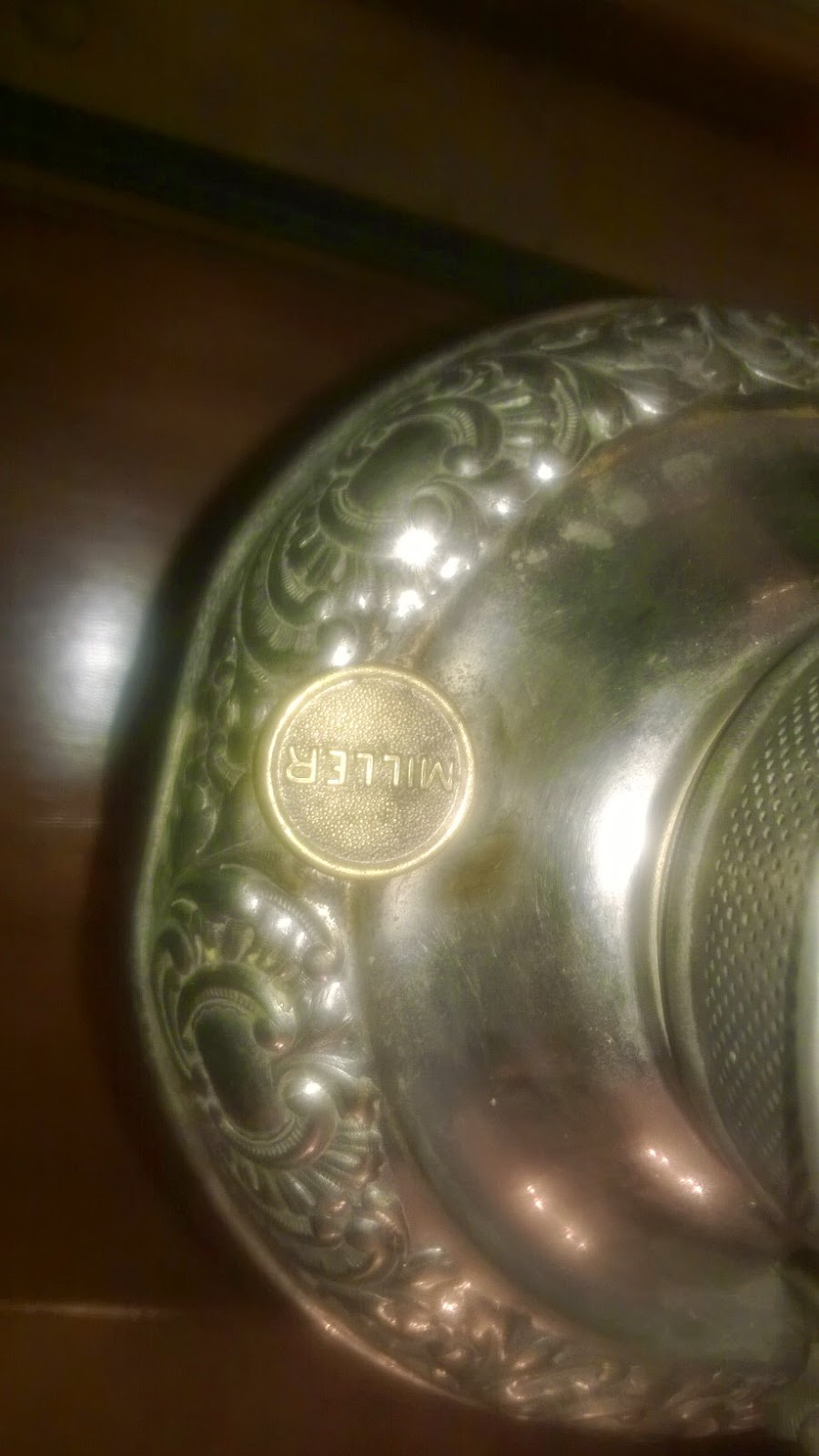 It's not even very dirty, although it's over 100 years old.  The instructions on the historic website say to carefully wash the nickle plated lamp in soapy water and dry.  That is all.  No polishes, cleaners or tarnish removers.  It's electroplated nickle over a brass casting.  Amazingly the website said to keep it filled with kerosene or lamp oil to prevent the metal from drying out and cracking.... so I guess we better fill it up!


Here is a bit of the history of the lamp maker.


Edward Miller commenced business in Meriden, Connecticut in the 1840's making and selling camphene and burning fluid burners. By the 1860's, Edward Miller had become an effective manufacturer and marketer in the kerosene lamp business.

When oil was discovered in 1859, kerosene became a safe and affordable lamp fuel. Miller was quick to seize the initiative seeing the need for burners for the new fuel. In 1866, Miller formed a joint stock company and reorganized under the name of Edward Miller & Co (E M & Co).

Edward Miller's first lamp was branded 'The Juno Lamp' and has a wick raiser that closely resembles that of the Rochester.  Miller first posted patents for his own wick raising devise in June 1892 which he branded 'The Miller Lamp' and constantly improved on the design of both the wick raising device and burner.  It seems at the same time he modified his earlier Juno lamp, simplifying the raiser and enabling a universal wick carriage.

After we were done with our rummaging... we managed to get a few jobs done around the house.  Imagine that!

I had gotten all 18 of my tomato plants in a row behind the garage...I think I have 14 different varieties to choose from. Once they were all planted, I robbed some dried grass cuttings from the neighbor's yard to mulch them in.  It will put a lot of rich nitrogen in the soil and keep the weeds from growing around the tomato plants.

Of course I had two "assistants" to help me with this task.  Oooooh I can almost taste the harvest now! Come on, fresh garden 'maters!

I also finished up the second coat of the dark green on the blocks across the front of the house.  I think they look kinda cute!  Steve said it reminds him of the green and white striped window awnings on old house.  Ya... kinda sorta! 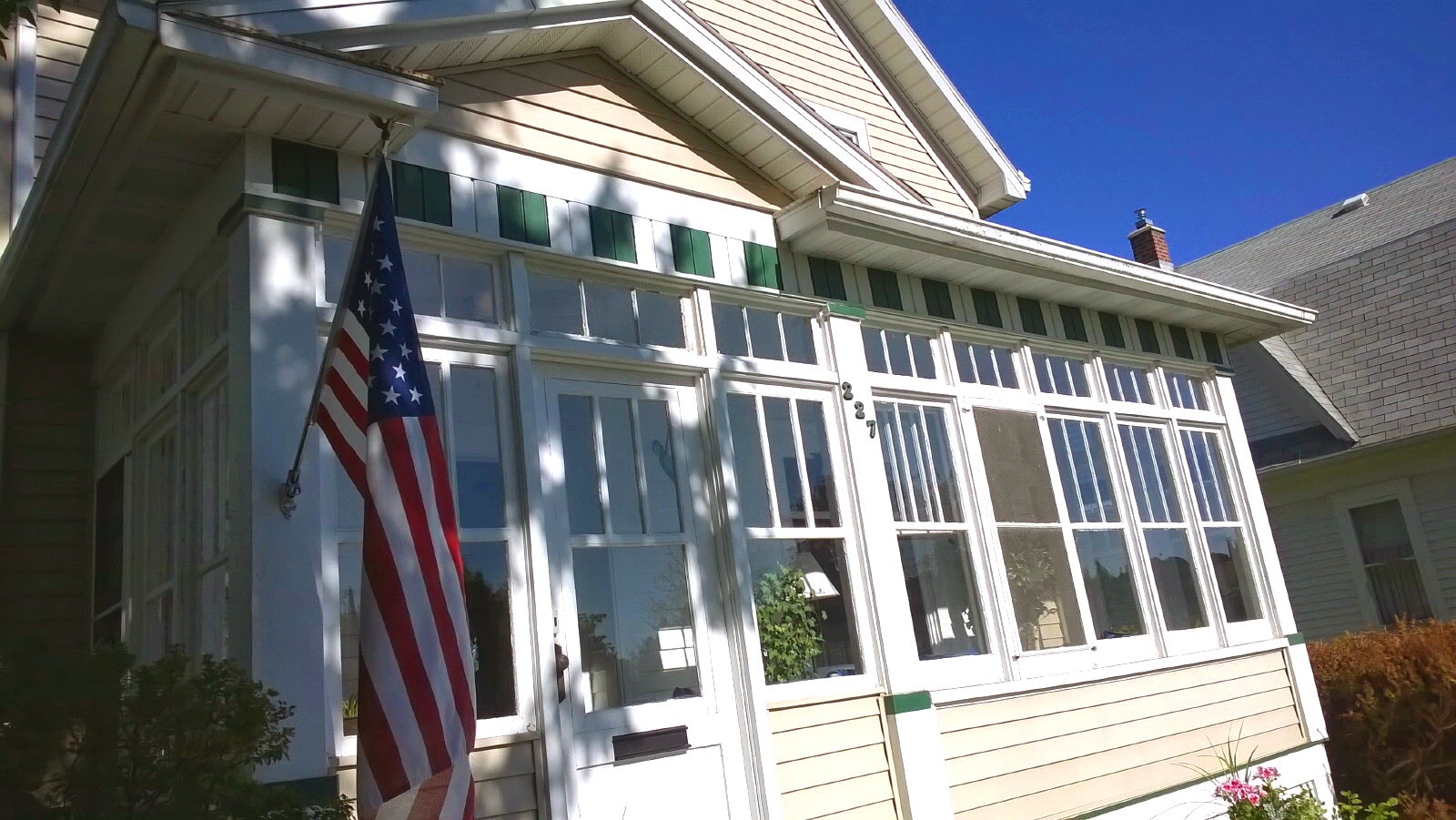 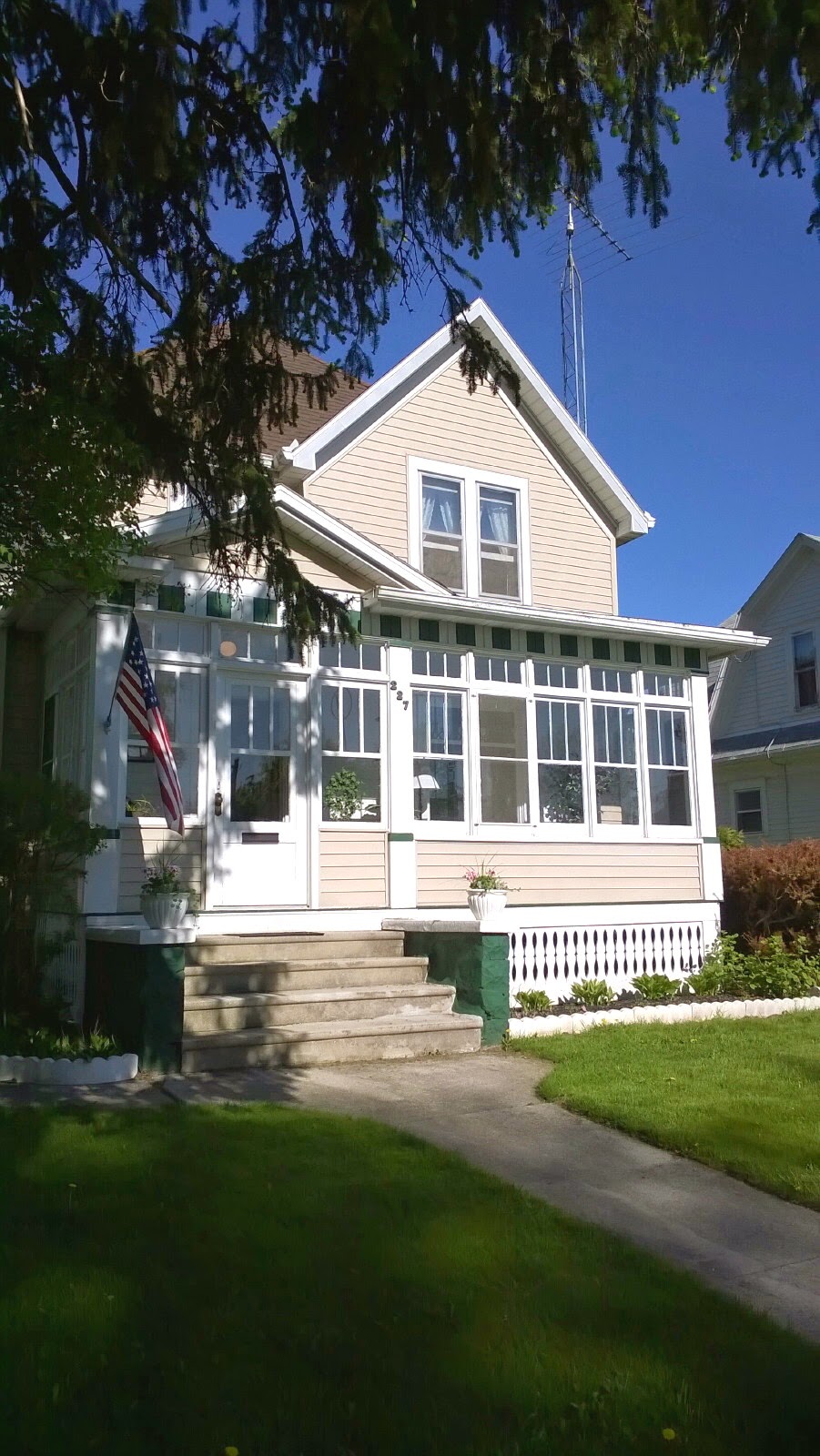 Up in the front yard, I planted my flowers in the two concrete pots for the stoop on the front porch (some pretty pink and white variegated geraniums, clumps of dusty miller, spikes and some vinca vines)   My hostas in the front bed are coming up too. 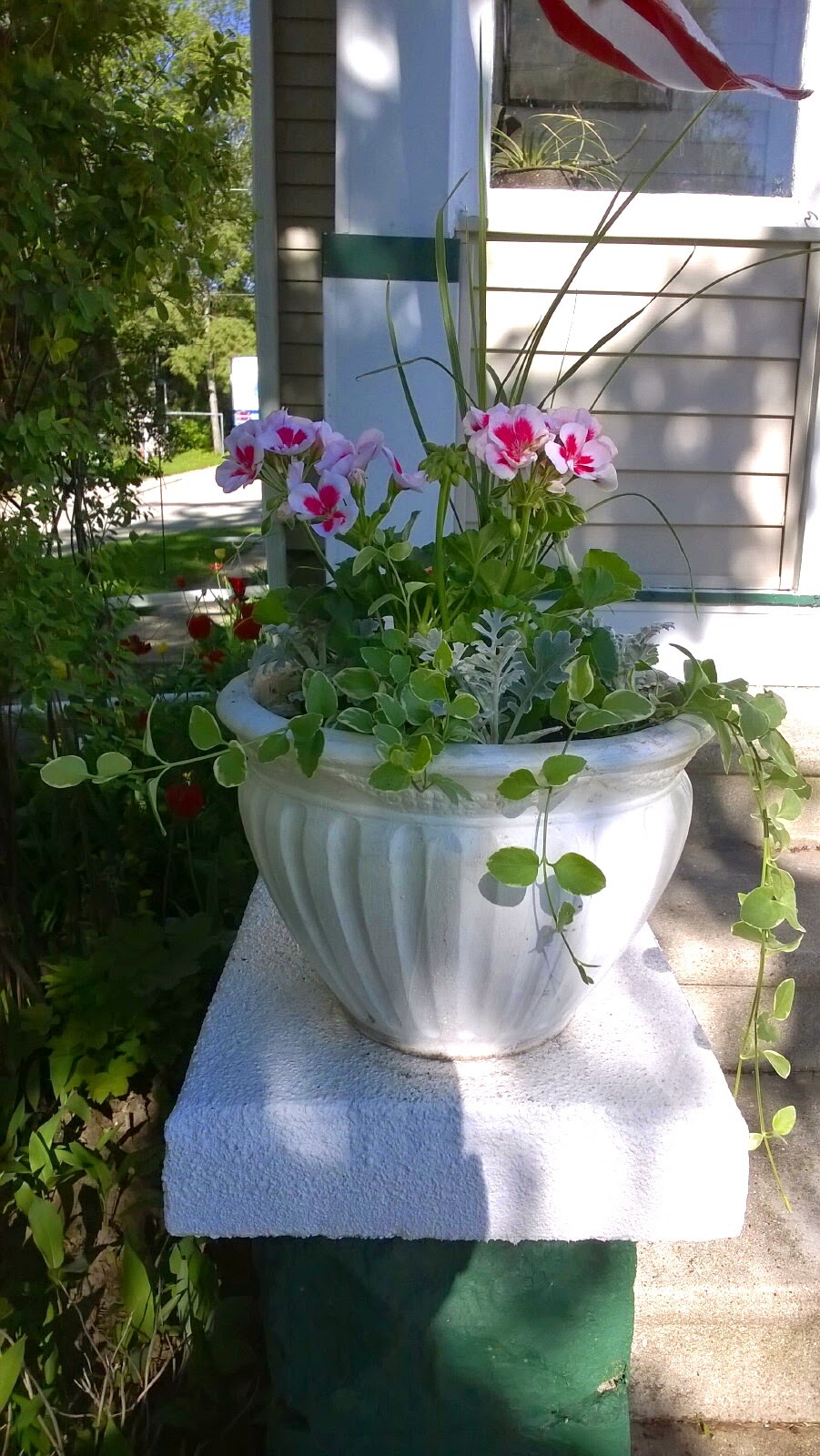 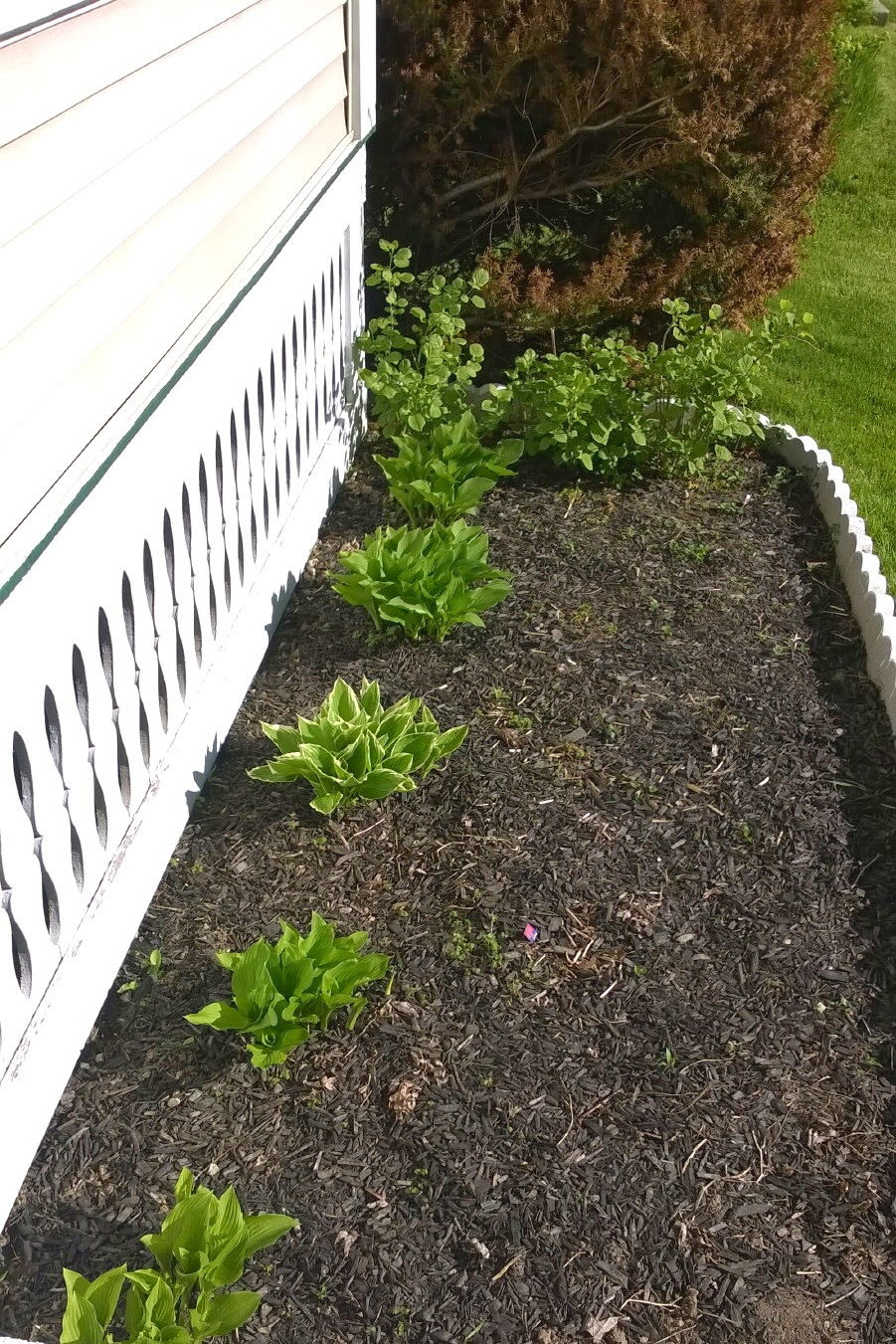 I planted 2 dozen little pink impatiens
in a round circle under the weeping cherry tree. 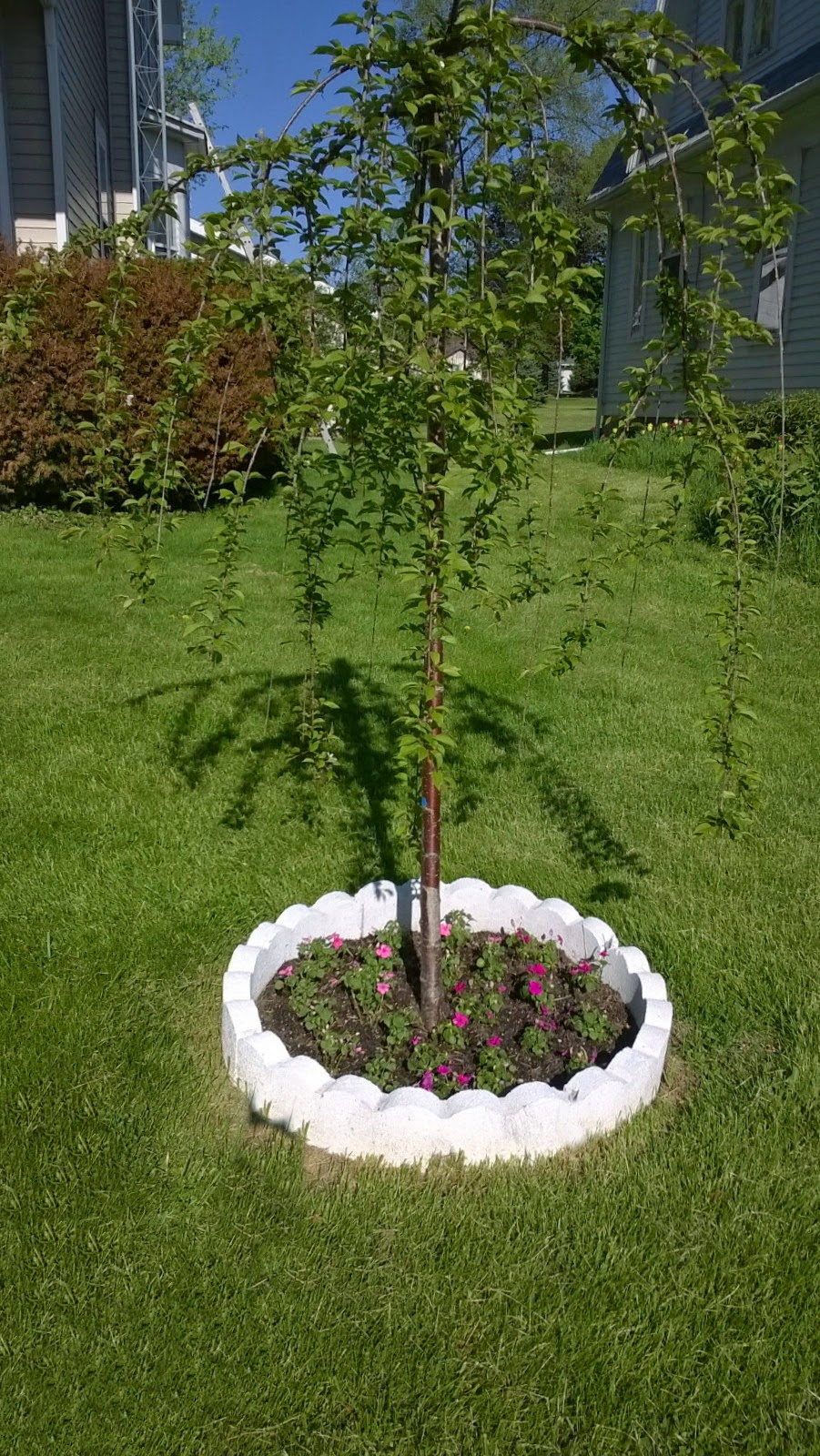 Steve was busy with washing the rubber roof that is over the bow window of the dining room.  A bit of the seal has let loose at one corner so he wanted it good and clean before he reseals it.  He was up there in the afternoon with the pressure washer hose snaked up the ladder.  He scrubbed good and got all years of built up gunk and mold off the black rubber roof.  It looks pretty good and he will take care of sealing the seams again when it's fully dried.


Steve also fired up our motorhome engine for a while to run and also started the generator up.  It's good to "exercise" the generator monthly and run it under a load.  He cranked up both rooftop air conditioners to create an electrical draw and gave it a good workout.  During the first few years that we owned our rig, we learned a valuable and costly lesson.  Because we have so much solar power and battery reserve on our rig, we weren't using our generator often enough.  The center rotor windings went bad from non-use as well as some other parts like the regulator and control board.  They need to be worked and used to prevent corrosion and lubrication problems. We had to undergo the costly repair of removing the generator out of the bottom of the motorhome, tearing it apart, shipping the rotor out to get rebuilt and then putting it all back together again.  Not cheap, Not Fun.... but we did most of the work ourselves to save money.  We make sure now to use it at least once a month.   Here is the blog post from that project:


Once we got our "chores" done, we tossed the doggers in our car and headed up to our friends Sharon and Fred's house for a cookout.  They live about an hour away, so it was a nice jaunt on a sunny day.

Steve worked with Sharon and Fred for years at the University of Wisconsin, Green Bay, but also we are RVing buddies and have camped together over the years.  We took a long trip with them out west to the Badlands, Custer Park and Mount Rushmore in 2006.

Brandy is their beloved pet, a yellow lab.  Duke has known Brandy for years and was happy to see her.  Finney had to meet her for the first time, and he didn't know what to think of her!  She had to wear the "cone of shame" because of an injury and surgery on her back leg that she keeps chewing on. 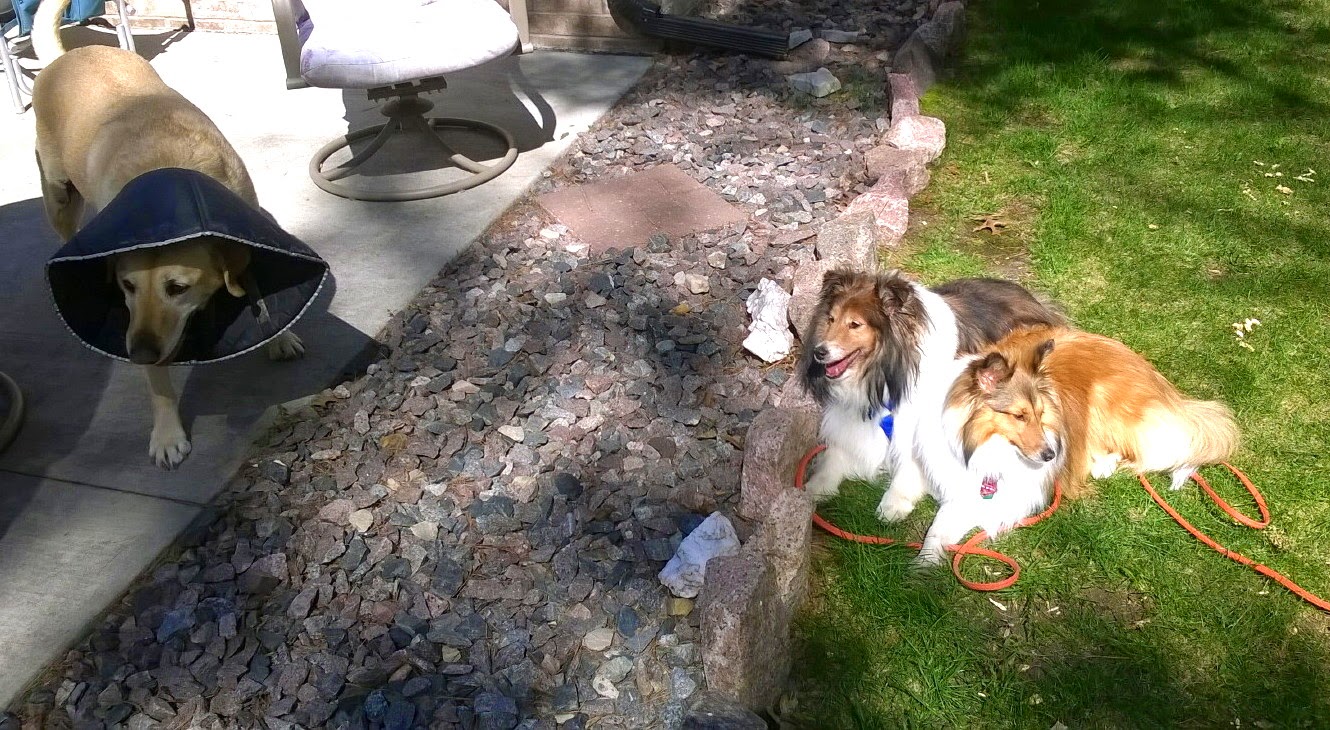 Finney sure didn't know why there was  a silly black cone around a dog's head....  he kept his distance and made sure that strange thing didn't get too close to him! 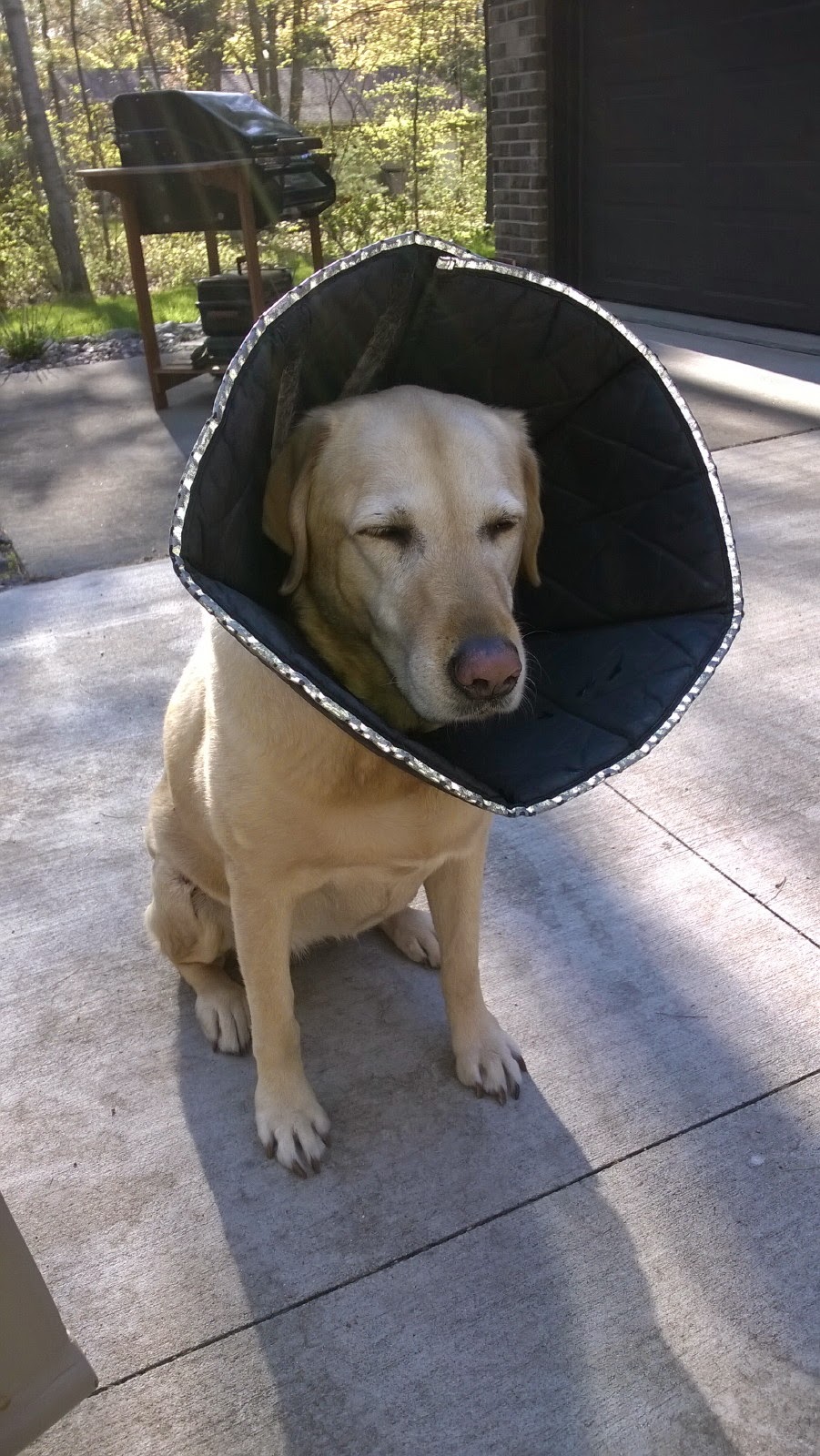 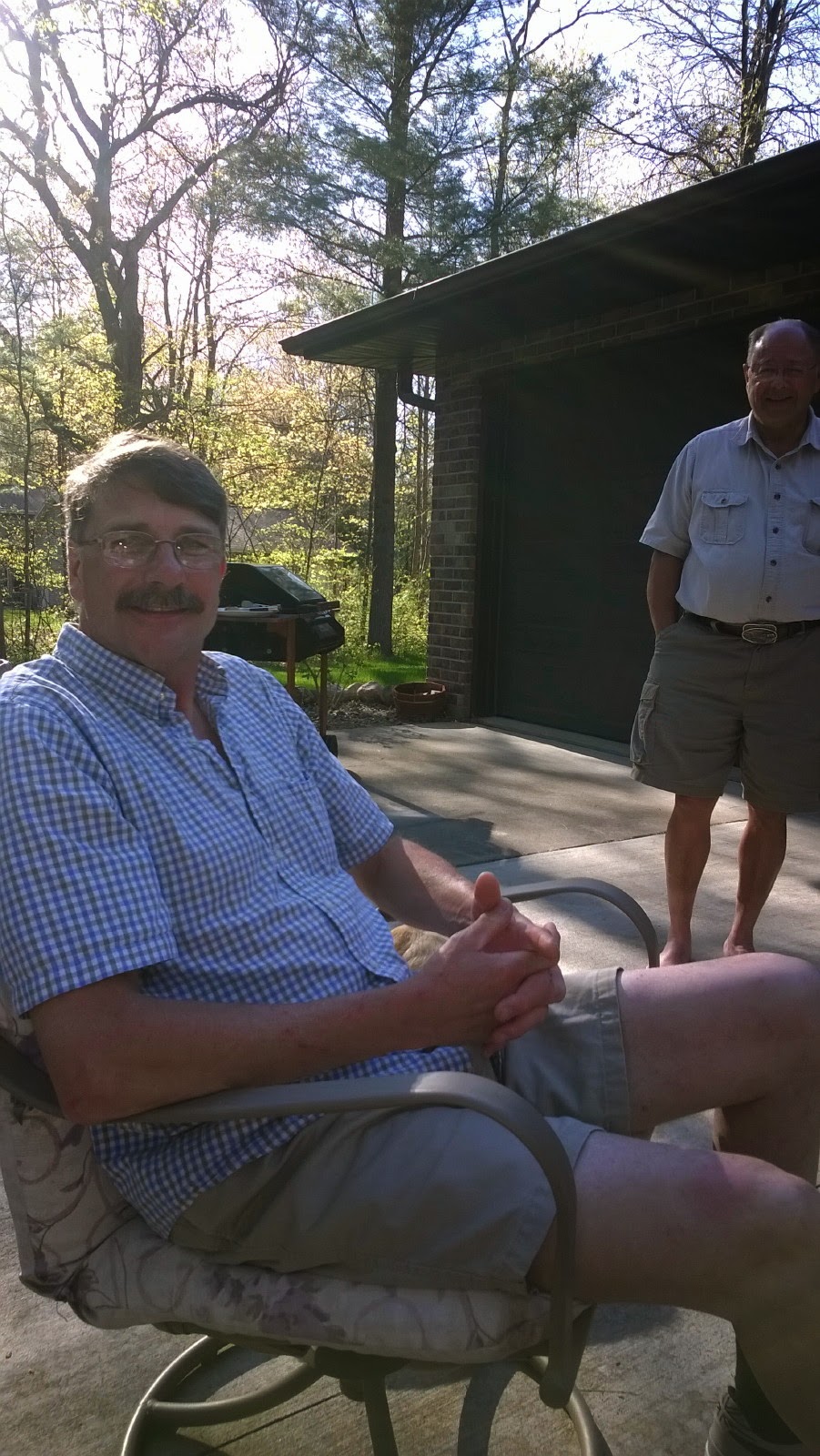 Fred grilled out pork tenderloins and we had a nice feast.  I brought stuff to make salads and some wine.  We were all set to eat our meal, with Brandy looking longingly from her cone! 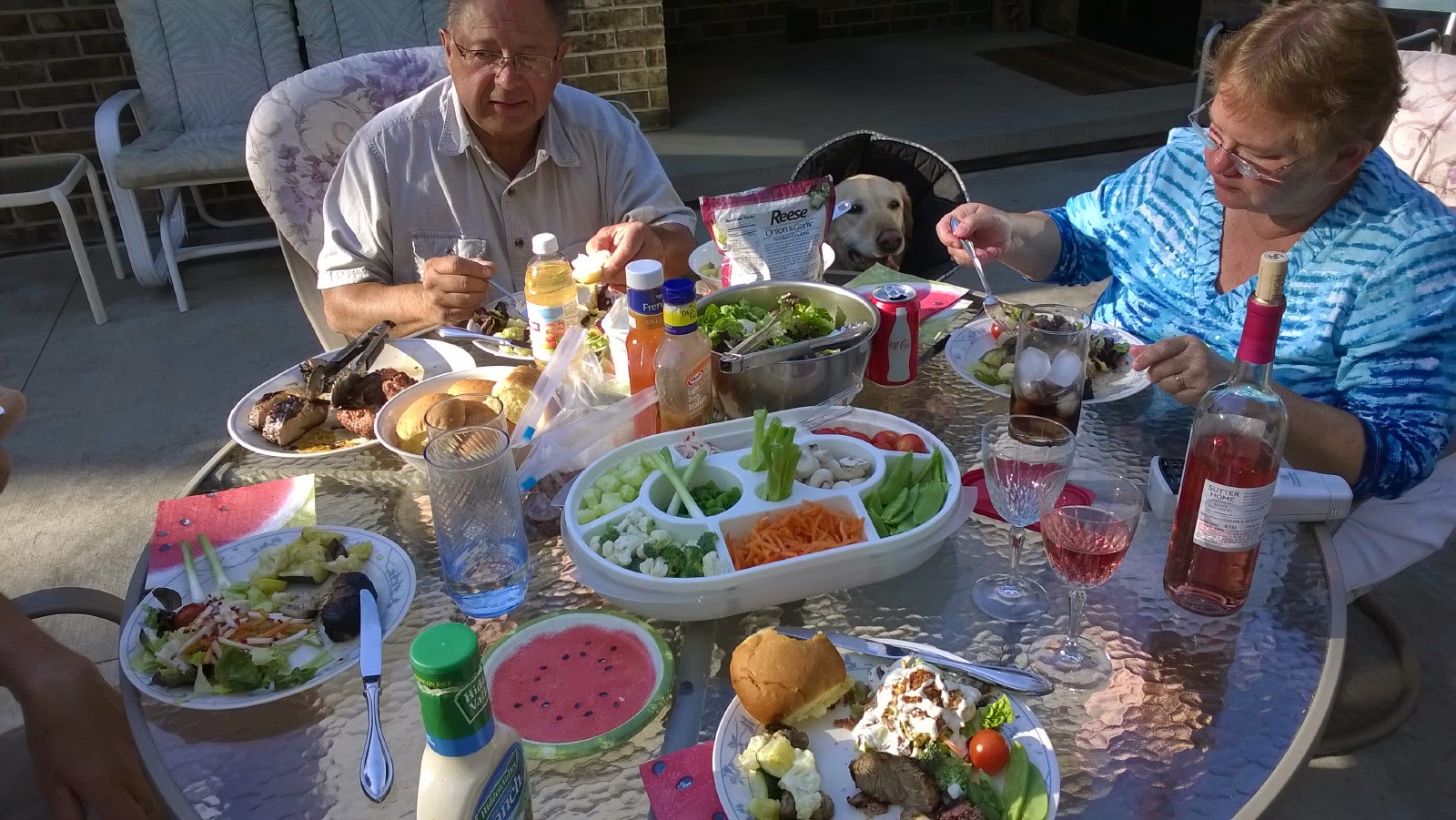 Sharon followed up with homemade strawberry shortcake!  It was a lovely day to stay outside on the patio with the dogs... we talked till well after dark and headed on home and to bed. 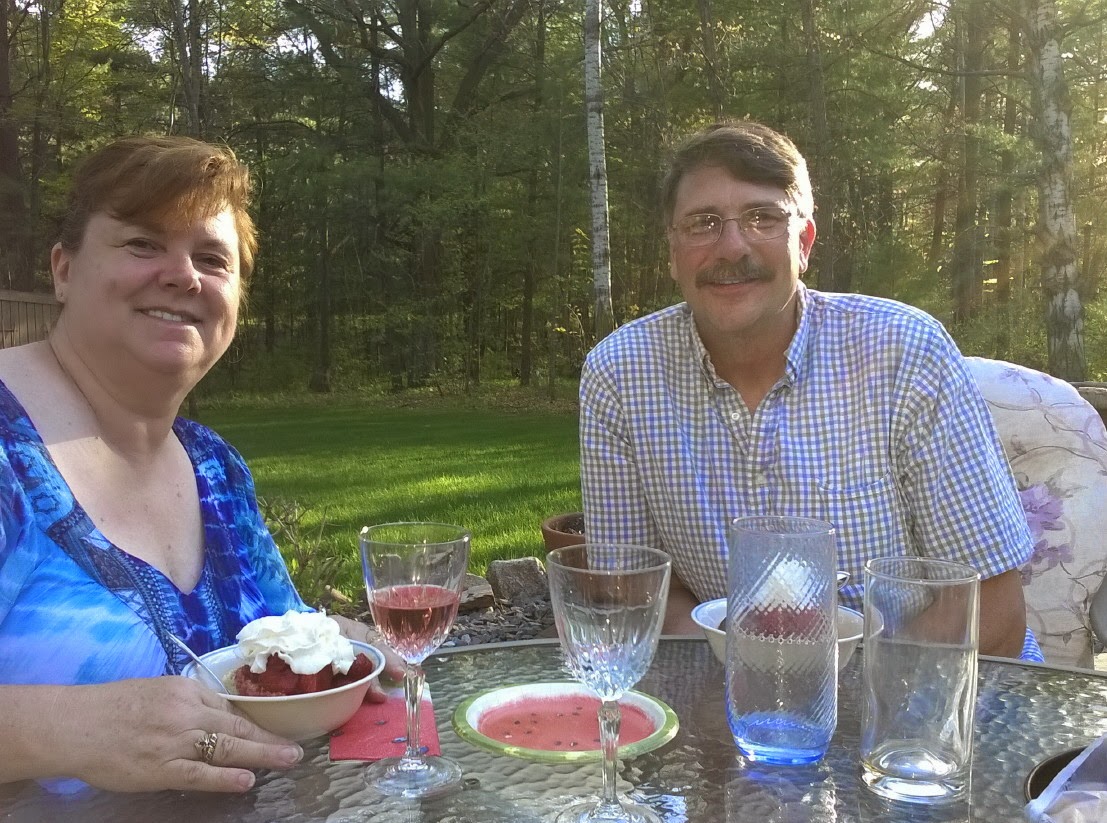 Sunday now has dawned with more sunshine and holds great promise to be a wonderful day in the mid to high 70's.  We are just having coffee and Steve has started to add things on my "Honey-do" list.  He is going to work on the bow window roof in a bit, uh oh...  he is up on the ladder now as I type this!  I better take a break and go help, or at least hand him things through the window and take pictures! 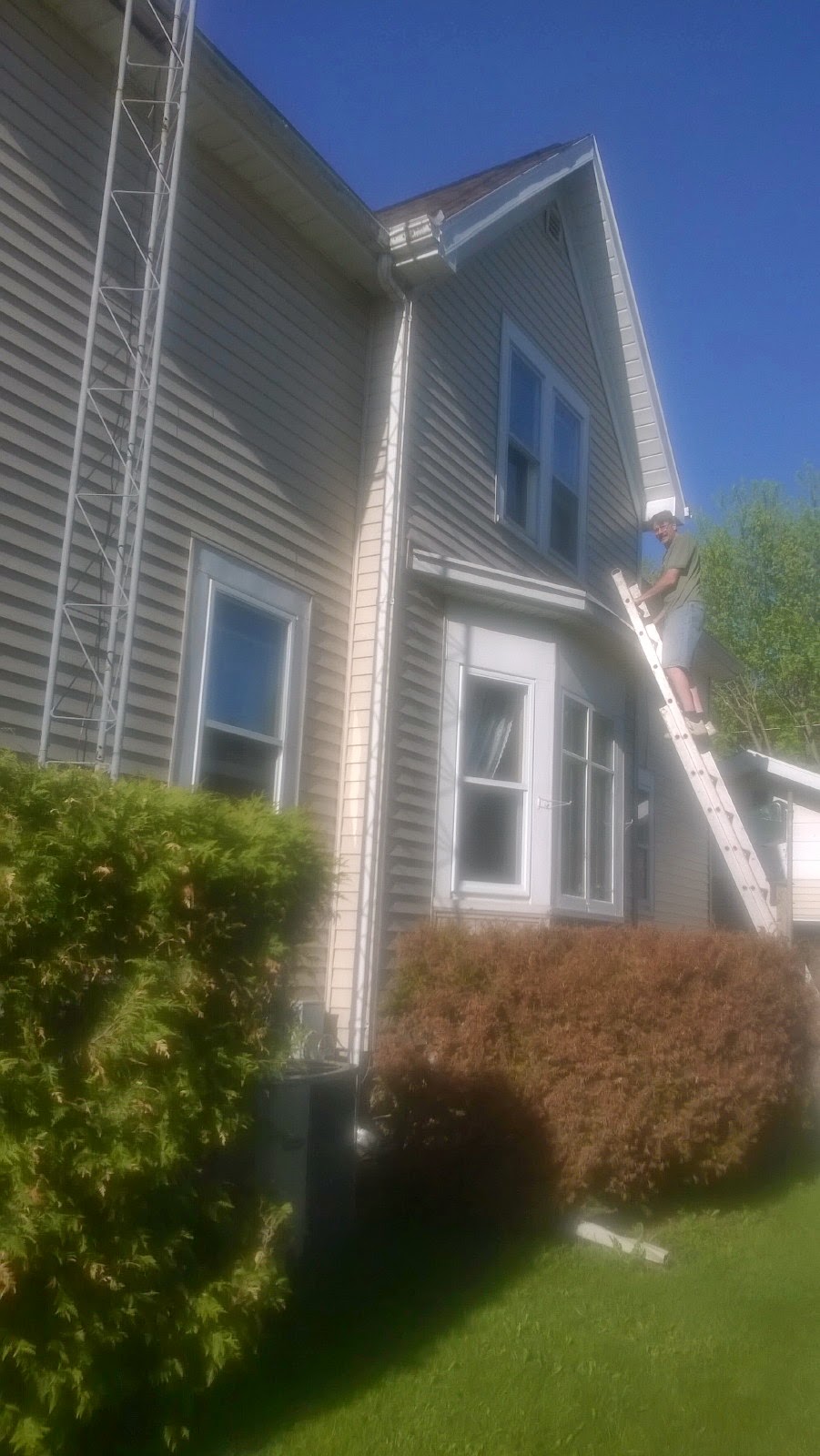 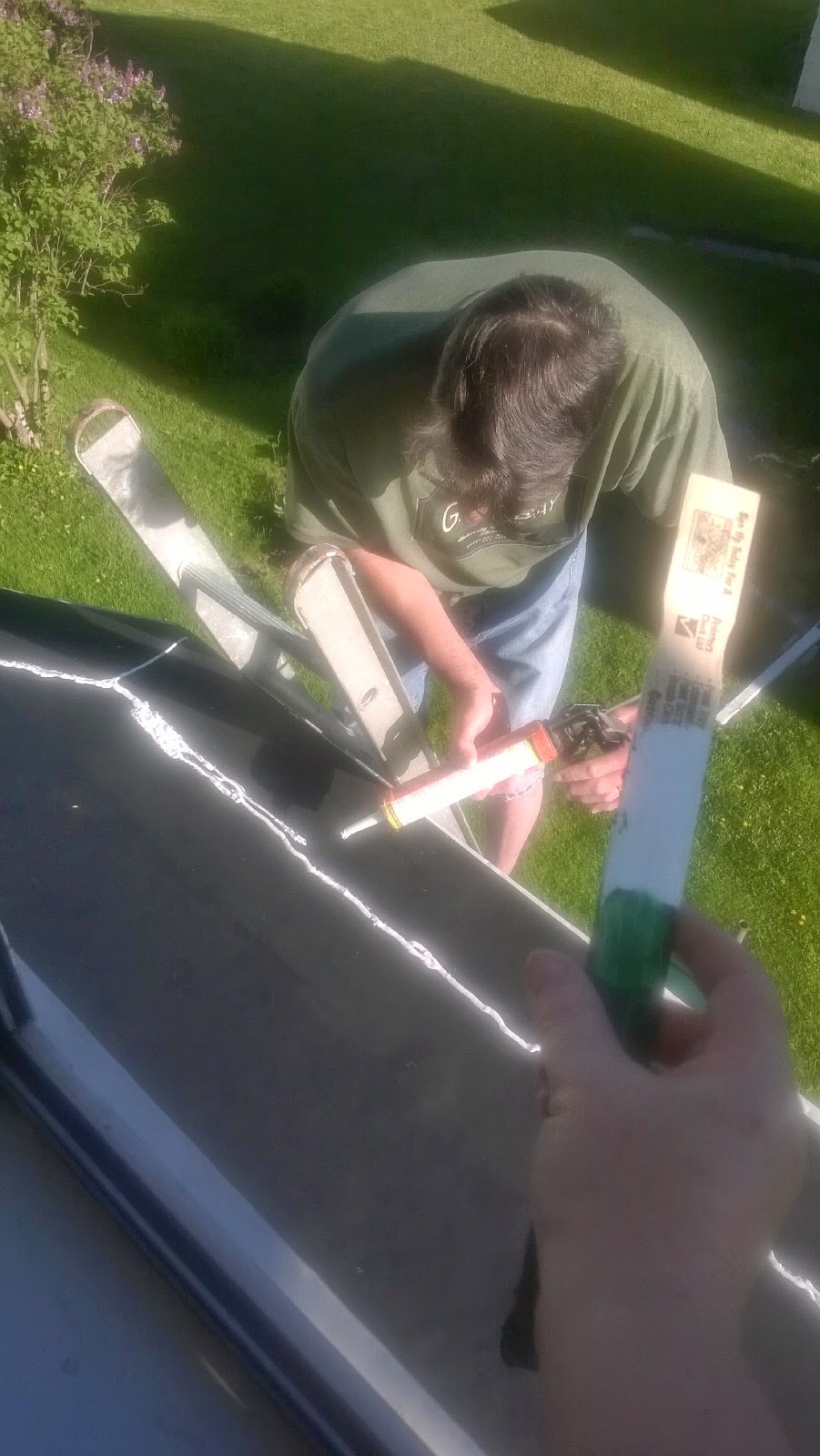 There... all done!
He used some of our good Dicor caulk from the motorhome roof.  It's pliable and UV resistant and is just about the best stuff on the market.  Although it's white, nobody can see if from the ground.

I think I am going to post this, and then go back outside to plant my coleus flowers around the yard.  After that, who knows what is next around Our Old House!

Posted by KarenInTheWoods at 10:31 AM