Ooooh when Steve wears his plaid flannel shirt, it just makes me all giddy inside.  Must be echoes of my past, growing up in the U.P. of Michigan... ya know, lumberjacks and all that stuff.  This is my favorite flannel shirt on him in this pic.  Don't he just make your heart go pitter pat? 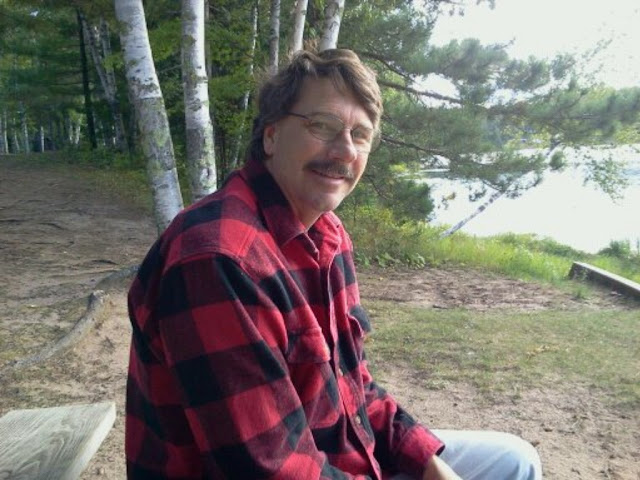 He came home from work early yesterday because he had put in extra hours last Saturday doing some plowing.  The DNR doesn't like to pay overtime, so instead he just took off hours to make up for it on Friday.  He decided it was a good day to play "Brawny Lumberjack Man"

In our backyard are two big old gnarly trees.  They had been lopped off at the top over the years, and were half-rotted and hollow in parts.  Even the neighbors agreed that they should get cut down. I stood by with the camera, and the cell phone to dial 911 just in case.  Ewwwwwwwww 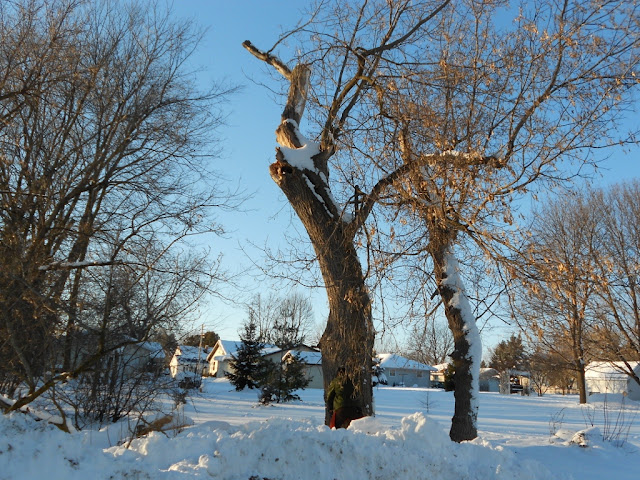 One large section already fell off 2 weeks before we bought the house and was laying on the ground.  It was right where we planned to park the motorhome this week, so we figured we better cut down the rest of the tree.  Once both trees are gone, we will plant some new ones in the spring. 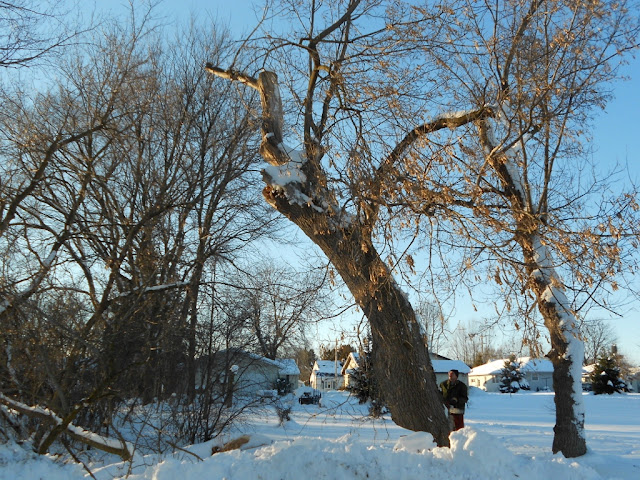 So he fired up the chainsaw and went to work on them (carefully)  making a notch
and then cutting the backside free to let each one tree topple right where they needed to land. 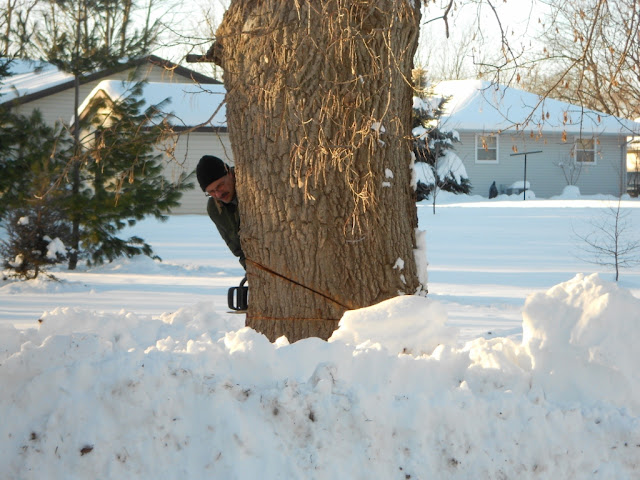 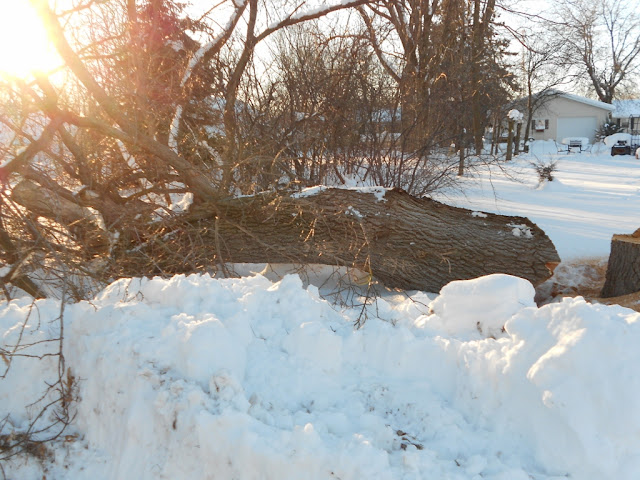 Here goes the second smaller one 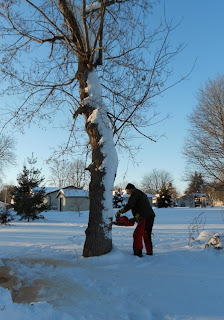 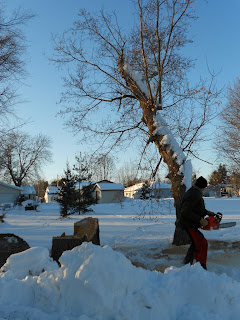 Here is the straight shot right up the driveway, past the garage and right up to the trees at my back as I snapped this pic.  This is where the motorhome will be parked later today.   The plaster guy, Byron, plowed this all out for us last weekend. 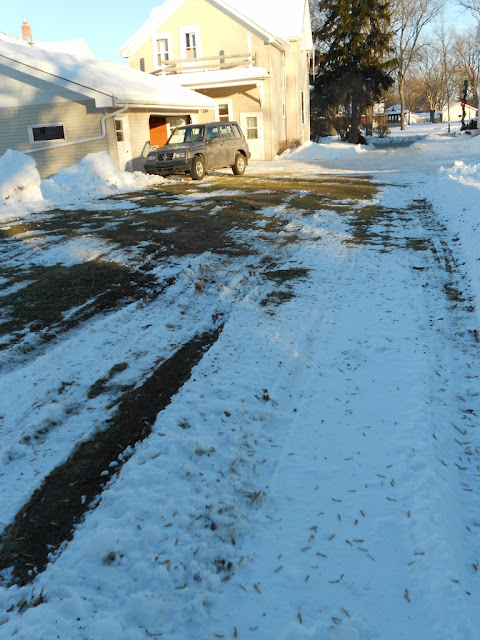 Of course, we had an audience watching us as Steve worked --- they had to supervise! 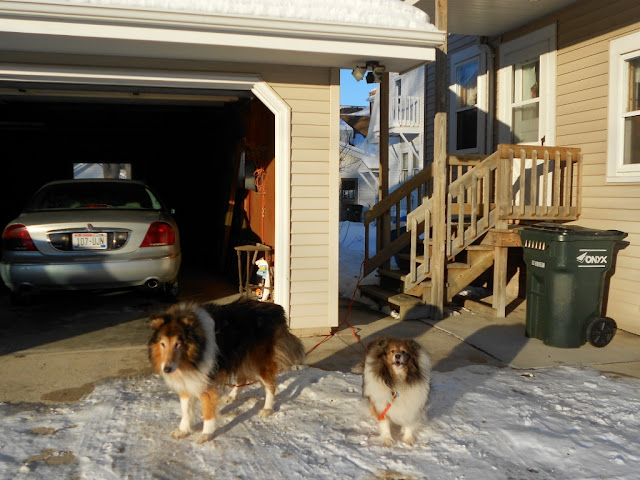 Now we placed an ad on Craigslist for FREE FIREWOOD to anyone who wants to come and haul the pieces away.  He cut them all up into 18 inch sections.  Hope someone comes today, so we can pull in with the motorhome and not have anything in the way.  Otherwise it can sit back there till Spring and we can clean it up then and stack it for firewood to burn in a back yard firepit.


(EDIT:  a guy is out there right now with Steve, loading up his truck and trailer)

Hard to believe we have only been in the house for ONE WEEK!!!!   I think today I might start hanging curtains in some of the rooms.  Yesterday I spray painted a gaudy bright gold ceiling fan with a hammered metal brown paint.  I polystained the blades to a darker reddish brown.  It sure came out NICE!   Who needs to blow money on the newer colored ceiling fans when you can just spray over a perfectly good older one that still works?  Steve put in a new dimmer switch for the chandelier, and I started placing picture frames around the diningroom plate rail to see where I want to place family photos.

Later today I will start to unpack my Treasure Trunk!  That is where my lace curtains are.  Remember when I packed this up at the old house to save for the day when we MIGHT get one more house?  I had no idea at that time it would only be 6 months later.  LOL   This is what I fit in that trunk: 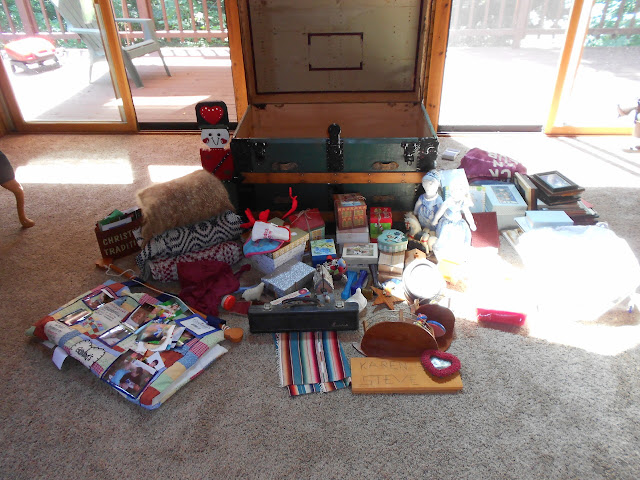 We are up and at em this morning, sipping coffee and I whipped up a tray of cinnamon rolls.  The house smells so good and the sun is shining outside already.  It's only 16 degrees out, but going to get nicer as the day goes on.  Good day to go winterize the motorhome and bring it home?


P.S.  oops.. someone asked yesterday if I could repost the floor plan photos of the house to refresh their memory.  Here are the new updated ones with furniture kinda drawn in: 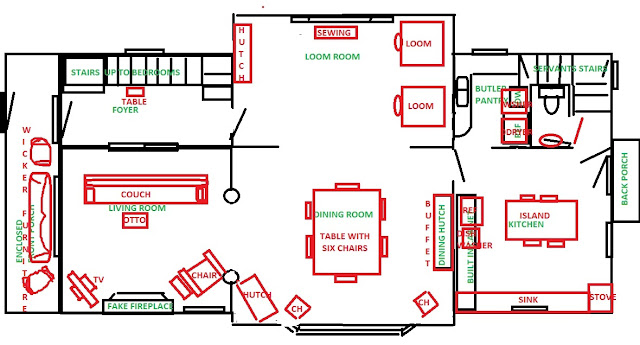 (we changed the way the livingroom furniture is placed and the kitchen is showing where we WILL place the refinished cabinets, sink and appliances once we tackle that job)) 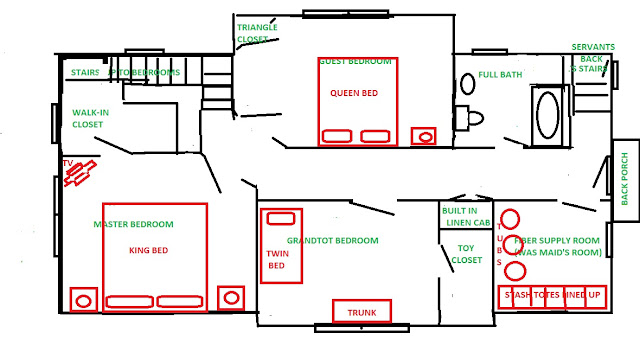 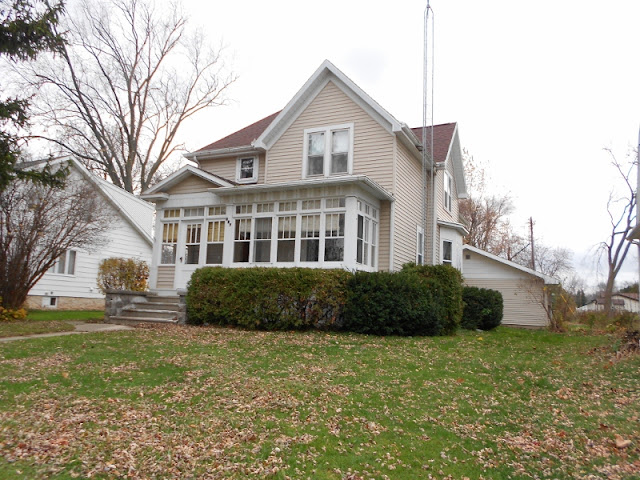 Posted by KarenInTheWoods at 7:53 AM